The overall awards winners have been announced in the 2016 Atkins Ciwem environmental photographer of the year competition, an annual international showcase for thought-provoking photography and video that tackles a wide range of environmental themes.

The environmental photographer of the year 2016 is awarded to Sara Lindström for her imposing photograph “Wildfire”.

Swedish-born Sara picked up photography while studying in South Africa, and is now based in the Canadian Rockies. Her projects have seen her travel across more than 50 countries, capturing the beauty of the more remote corners of the Earth. “It was an exceptionally warm day in July in southern Alberta when I came across this massive pinkish smoke plume rising high towards the sky. The big flames were thriving on the dry land and had me completely mesmerized in fear and awe”. (Photo by Sara Lindström/2016 EPOTY) 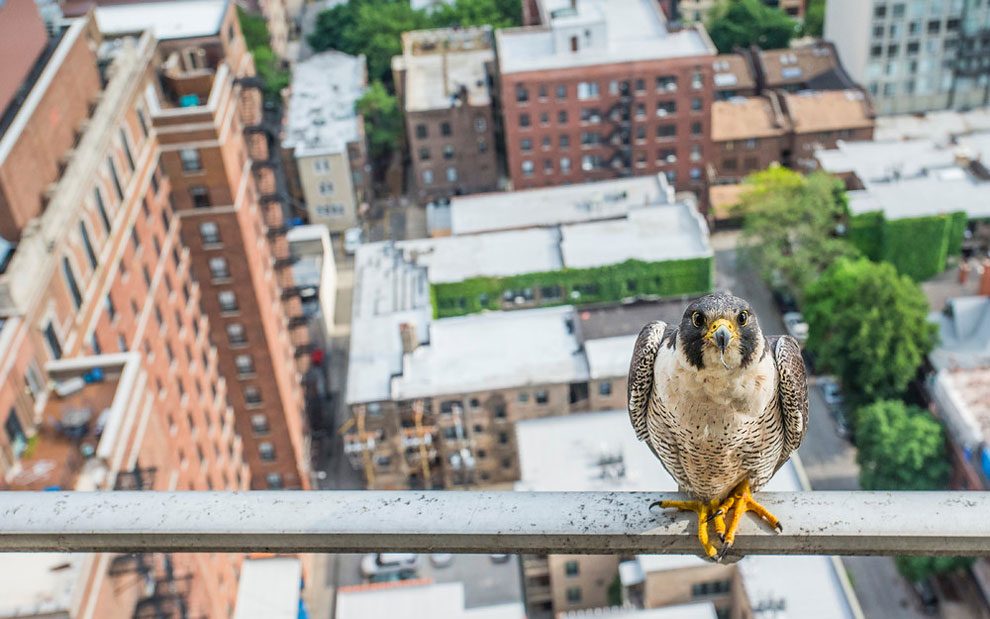 Luke Massey is awarded the young environmental photographer of the year 2016 for his bold photograph “Poser”.

“Peregrines were extirpated in Illinois in the 1960s but in the 1980s a reintroduction programme began and now 22 pairs nest in Chicago alone”, he explains. “One pair have chosen a Chicagoan’s condo balcony as their nest site and in 2015 I followed them as they raised four chicks to fledging”. Described by naturalist and broadcaster Chris Packham as an “exceptional young man”, Luke dedicates his photographic skills to drawing attention to the plight of wildlife under threat. (Photo by Luke Massey/2016 EPOTY) 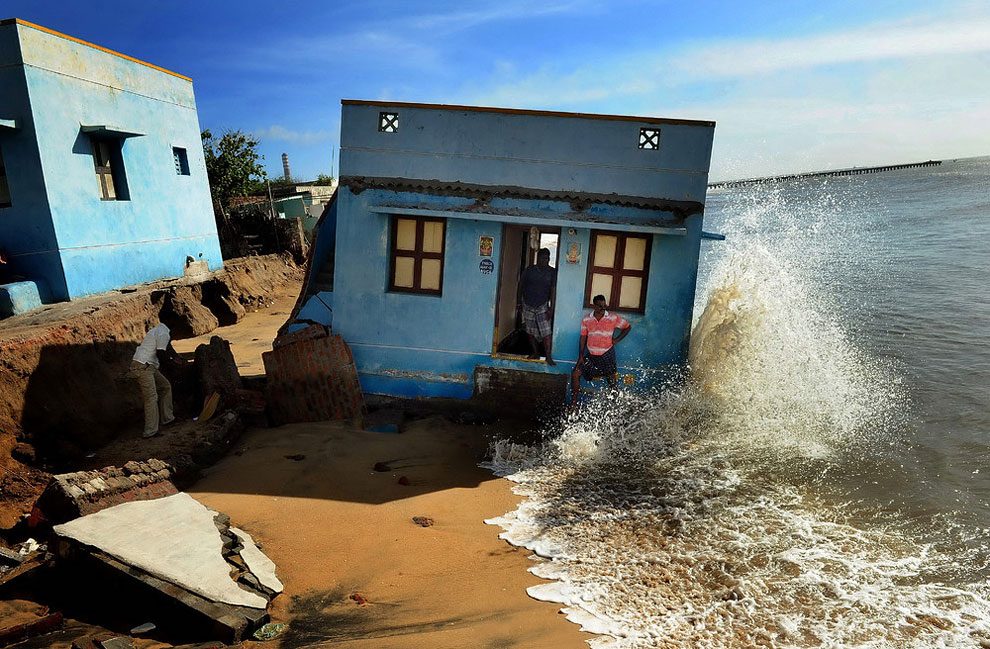 The Atkins built environment award 2016 goes to Indian photojournalist S.L. Kumar Shanth for “Losing Ground to Manmade Disaster”, which depicts the damage being wrought on the coastline at Chennai, the biggest metropolis in southern India, by a combination of man-made and natural forces. (Photo by S.L. Shanth Kumar/2016 EPOTY) 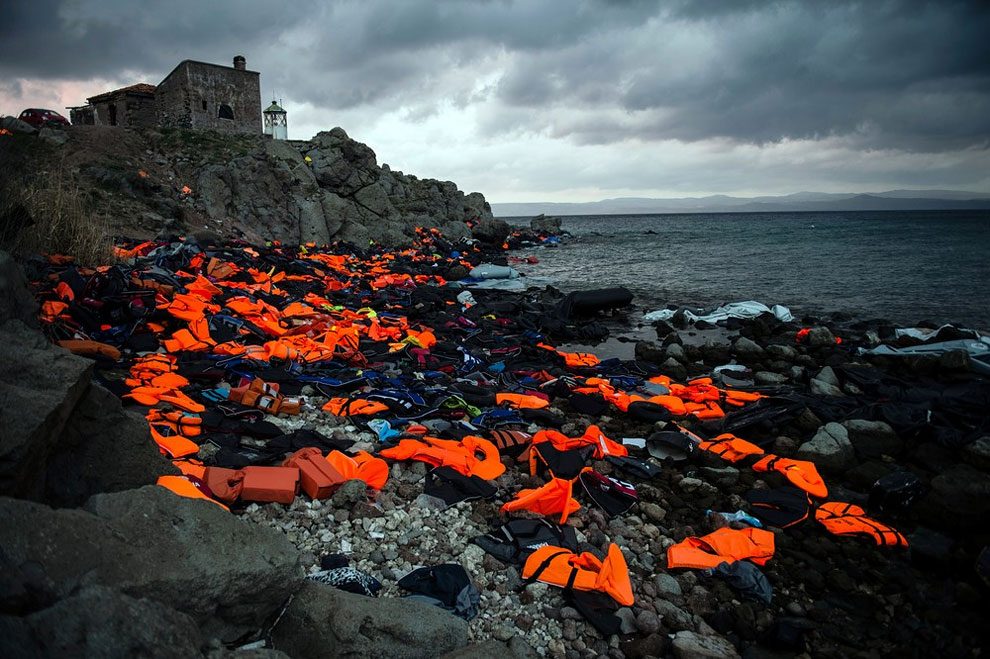 The Ciwem changing climate award 2016 is presented to Sandra Hoyn for her moving photograph “Life Jackets on the Greek Island of Lesbos”.

Hoyn, a German photojournalist, concentrates on social, environmental and human rights issues. Her winning photograph depicts the discarded life vests used by refugees to cross to Greece from Turkey, and hints at the enormity of the crises and dangers faced by the refugees. (Photo by Sandra Hoyn/2016 EPOTY) 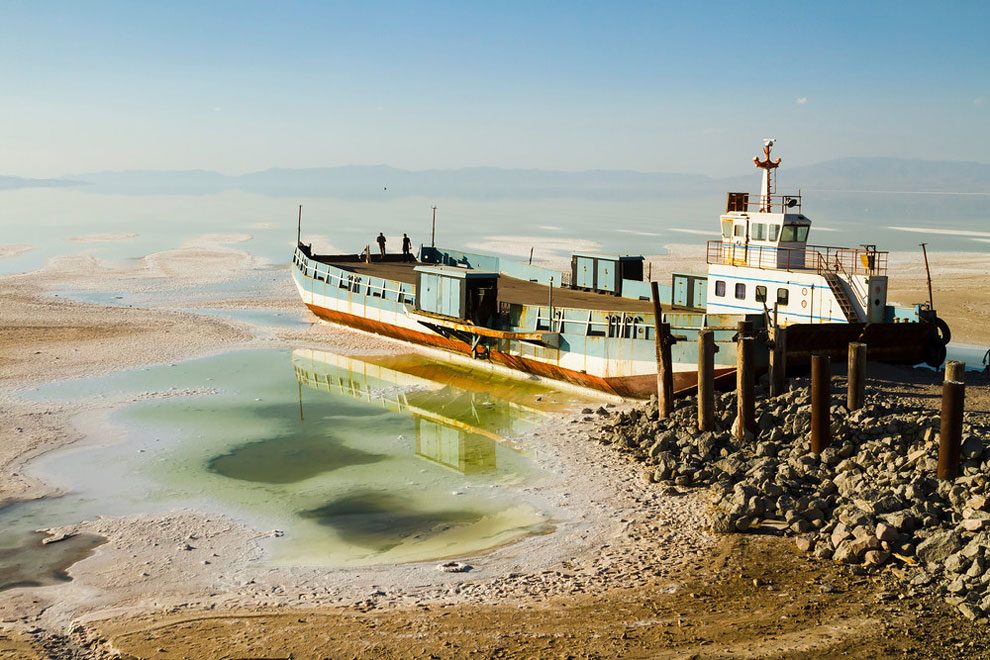 “The Salt Lake Urmia could be a symbol of what will happen soon to Iran – it is going to be dried out”, explains Yazdani. “The biggest salt lake in the Middle East, it now contains only 10% of the original amount of water, as a result both of climate change, and of dam and well construction”. (Photo by Pedram Yazdani/2016 EPOTY) 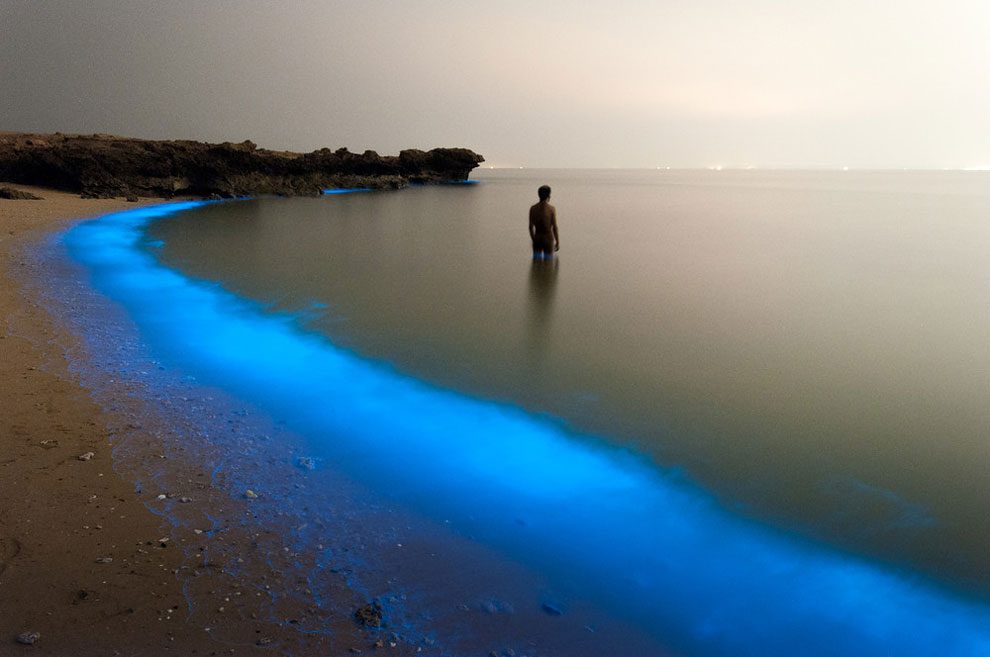 Shortlisted: Pooyan Shadpoor, Houcheraghi. While walking along the shore of Larak, Iran – an island in the Persian Gulf – Shadpoor came across this luminous scene. The “magical lights of (the) plankton … enchanted me so that I snapped the shot”, he writes. (Photo by Pooyan Shadpoor/2016 EPOTY) 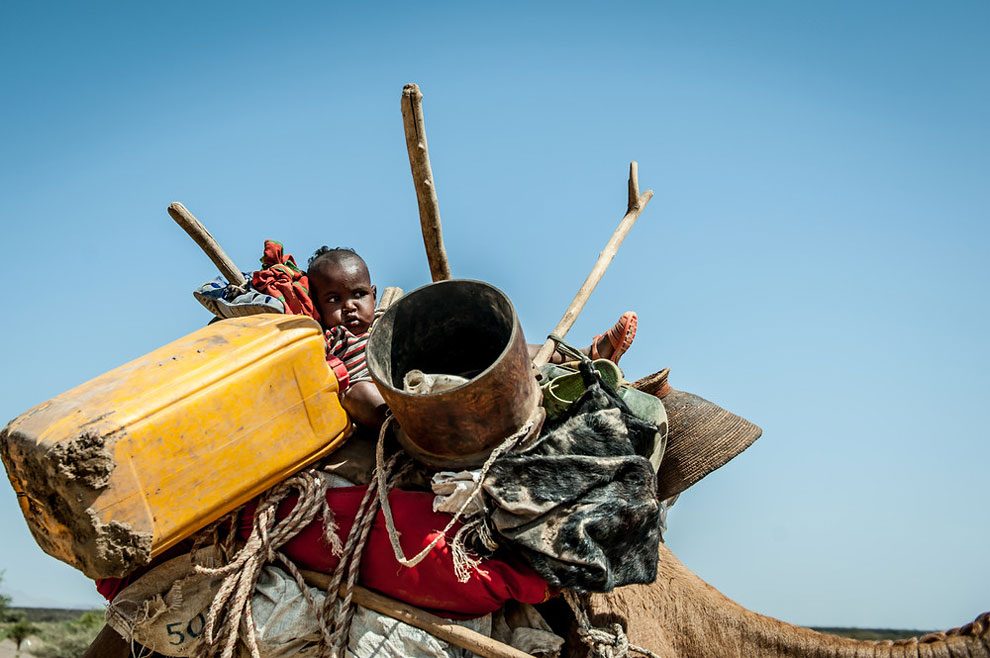 Shortlisted: Jonathan Fontaine. A baby on a camel and his family decided to move their camp of 10km to be closer to a river where there is some water left.

Ethiopia is experiencing its worst drought in 50 years as the direct result of El Niño. Some 75% of harvests have been lost, 1 million livestock have died, and 10 to 15 million people require emergency humanitarian food assistance, with 430,000 children experiencing severe malnutrition. (Photo by Jonathan Fontaine/2016 EPOTY) 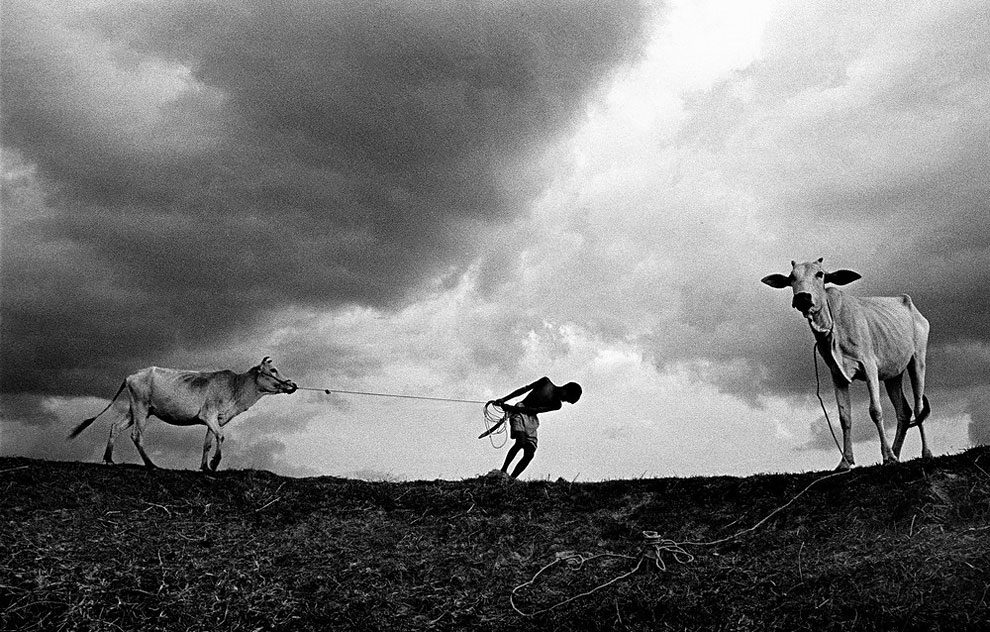 Shortlisted: Moni Sankar. This cowboy in West Bengal, India, wanted to return his pet to shelter due to bad weather, but the pet did not agree. (Photo by Moni Sankar/2016 EPOTY) 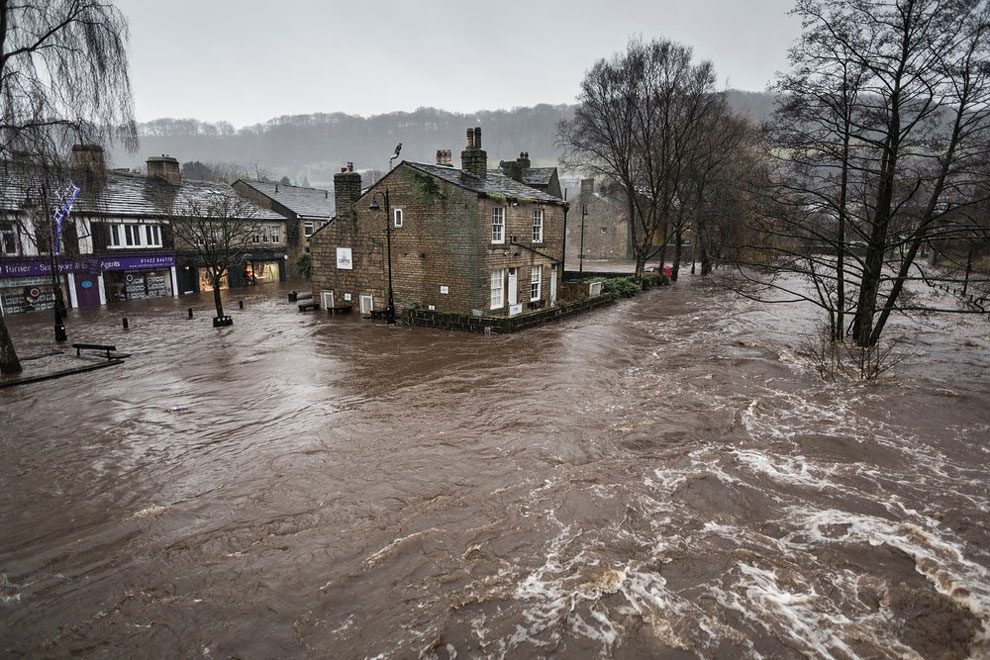 Shortlisted: Steve Morgan. On Boxing day 2015, floods came to Hebden Bridge, a thriving ex-mill town in the Calder Valley, West Yorkshire. Flood sirens echoed around the Valley at 7.30am, alerting sleeping residents to the rising waters about to engulf the town. (Photo by Steve Morgan/2016 EPOTY) 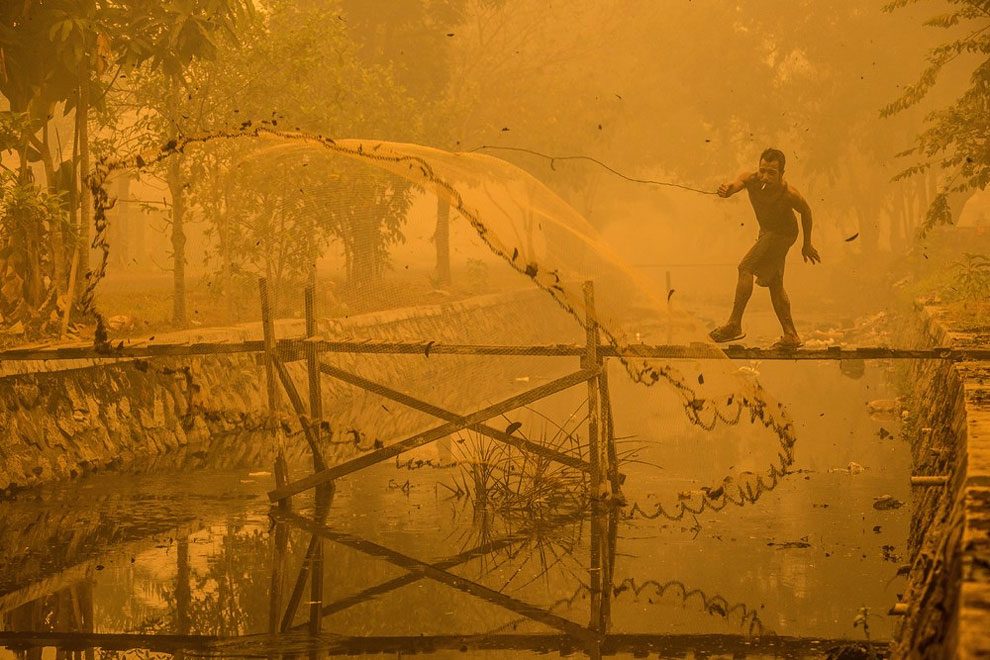 Shortlisted: Björn Vaughn. Slamet is a builder in Palangka Raya, Central Kalimantan, Indonesia. All construction work had stopped due rampant peat fires blanketing the region in a toxic smog. He casts his net into a polluted canal, hoping to make a catch. “Better a dirt fish than no fish at all!” he says. (Photo by Björn Vaughn/2016 EPOTY) 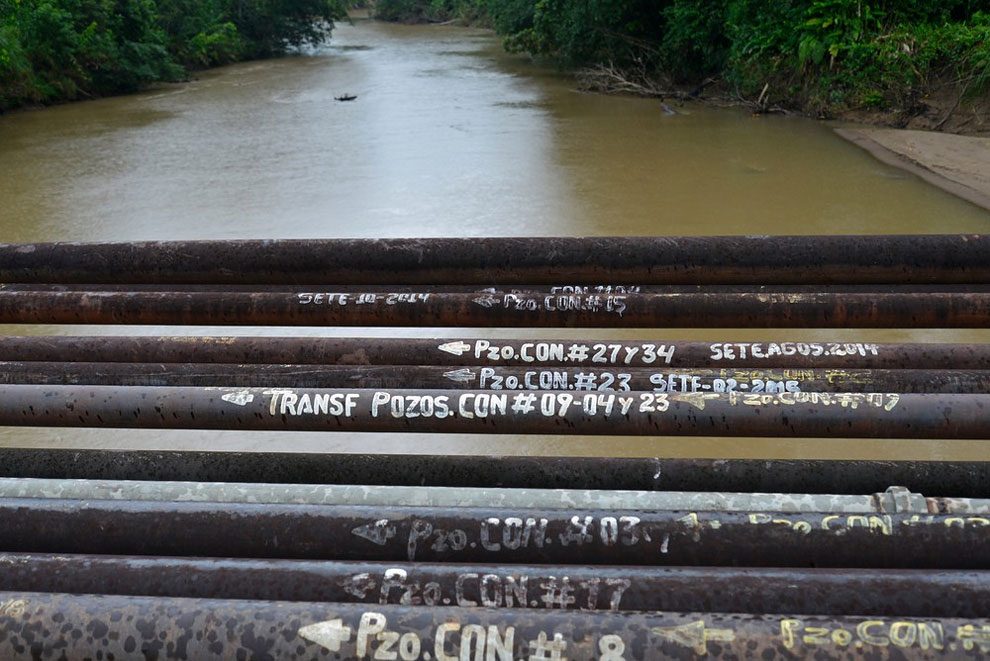 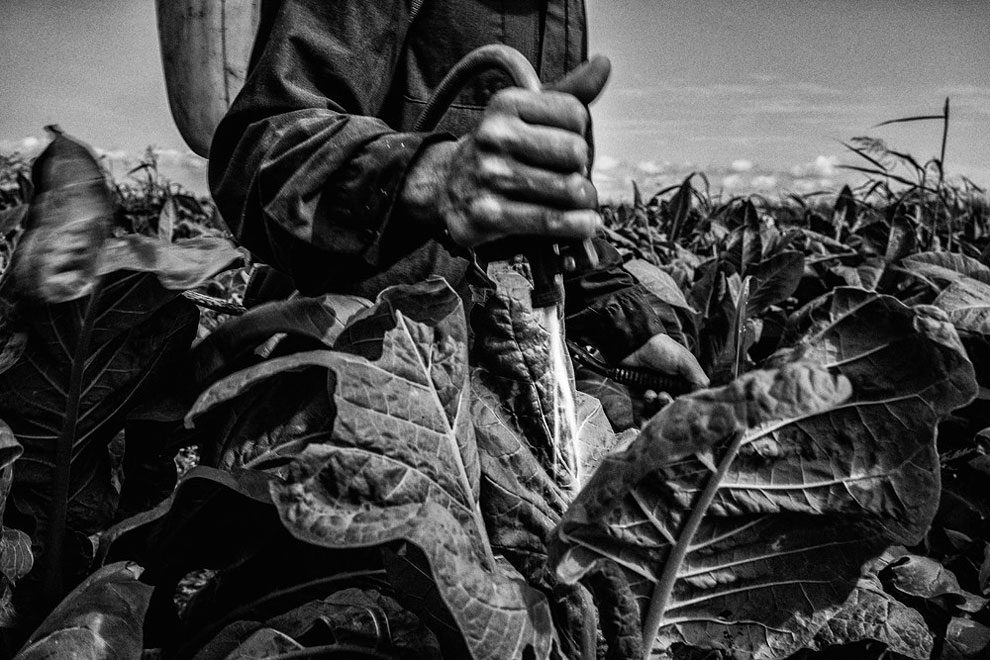 Shortlisted: César Rodríguez. Artemio, 50 years old, applying pesticides at the tobacco fields in Mexico. He is applying a mixture of chemicals that if absorbed by his body, would put him in danger of losing his life. Normally these chemicals are prohibited, but not in these fields. (Photo by César Rodríguez/2016 EPOTY) 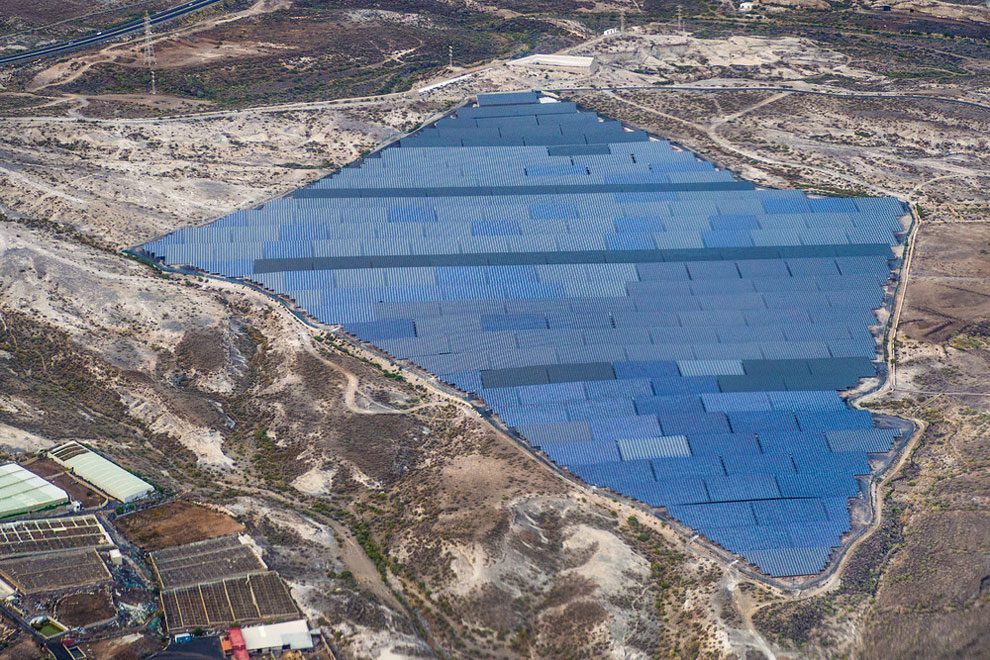 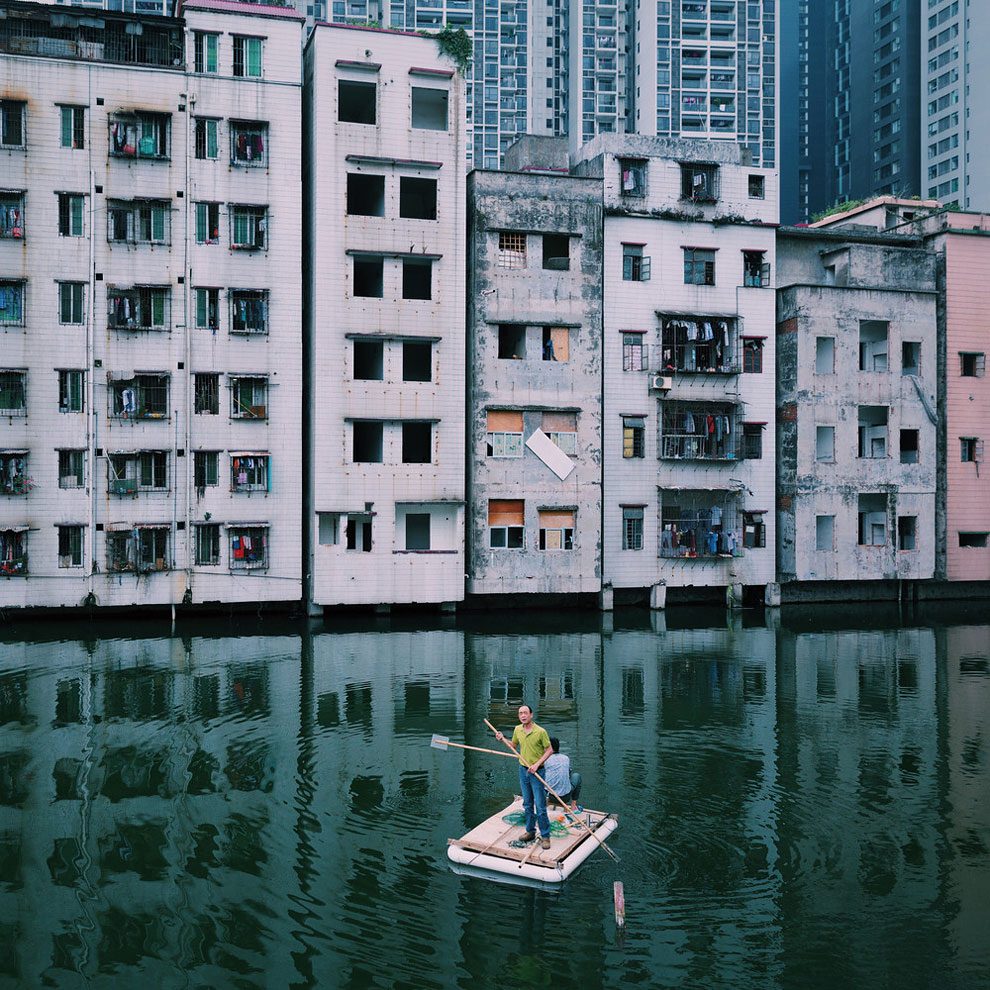 Wonderful Black And White Photos Of Rome In The Post-WWII
This Couple Shot Baby Photos With A Burrito And It's Hilarious
These Photos of Bullets Tearing Apart Portraits Aren’t What They Seem
Not in Your Face
Photographer Els Vanopstal
Photographers Against Wildlife Crime
Child Labor In America: Horrible Photographs That Show Boys At Coal And Zinc Mines From A Century Ago
Photographer Joseph Philippe Bevillard Captured The Secret Lives Of Irish Travellers Revealed In Intimate Portraits
Kids Reacts on Exhibitions. Very Funny
Australia’s Silo Murals Make a Road Trip an Art Odyssey
Coco Rocha By Craig McDean
Minimalist Aquatic Photos by Mária Švarbová
Someone Is Showing That All Instagram Photos Are Starting To Look The Same And It’s Pretty Freaky
Photo Project That Proves Beauty Knows No Nationality
No Name
Photo of the Day: The Rescued Cat
These Are The Spectacular Winning Photos In The 2017 Best Aerial Photography Contest
Warm Oscars 2018 Photoshoot By Mark Seliger
Model's Underwater Shoot With Whales
"People In Cars": Candid Photos Of Drivers In Los Angeles In The 1970s
"Hong Kong On Fire": Local Photographer Captured Stunning Images Of The Days In Fight For Civil Rights
GuruShots: Winning Photographs from The Impressive Still Life Contest
Photographer Angelica Dass Matches Skin Tones with Pantone Colors
The Captivating Underwater Photographs of Enric Adrian Gener
atkins, ciwem, environmental, photographer, winners