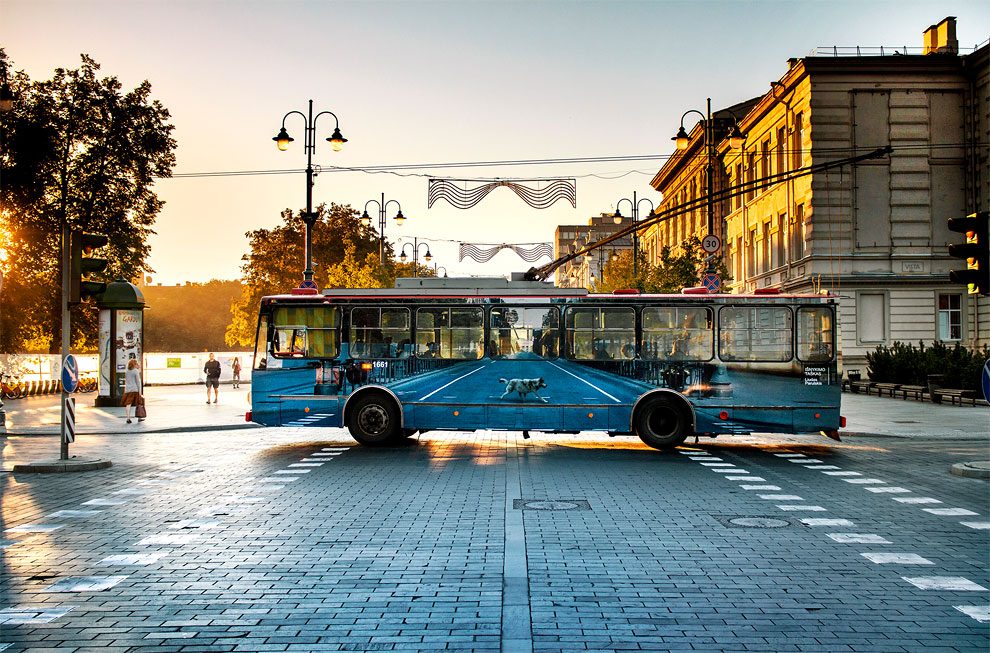 Though not as common in North American cities, many European metropolises have extensive trolleybus systems. As part of the Vilnius Street Art Festival in Lithuania, artist Liudas Parulskis executed an ingenious project that made the city’s trolleybuses disappear. In collaboration with creative place-making agency Studio Vieta, Parulskis took blown up photographs of city streets and architecture and wrapped entire trolleys, creating an illusion of the urban landscape on the moving vehicles.

Trolleybuses have became a rare sight in most contemporary cities, but Vilnius, the capital of Lithuania, still has a running fleet that adds a lot of character to the cityscape. Inspired by the slow electrical buzz and white and red aesthetics, for a 4th edition Vilnius Street Art festival curatorial team in collaboration with Studio Vieta have invited an artist Liudas Parulskis to create an artwork for trolleybuses. 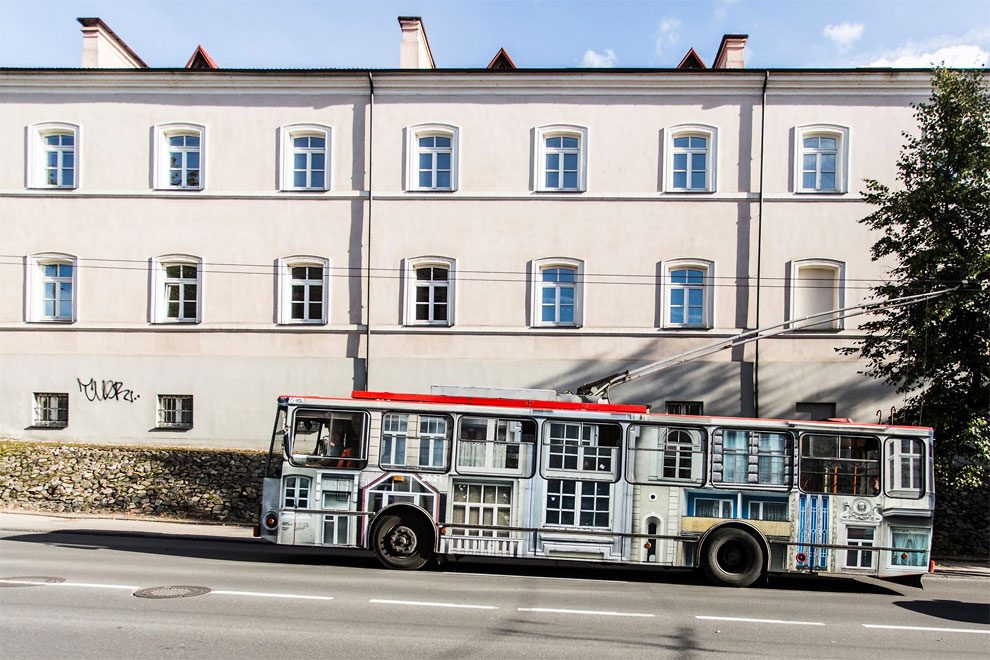 Vanishing Trolleybus has a picture of the perspective of the street printed on both of its sides and once a day while crossing Tumo Vaizganto street and Gediminas Prospect intersection he “dissapears” by camouflaging itself into the landscape. Liudas Parulskis has also added a wolf crossing the road. A wolf is a spirit animal of Vilnius since it’s founding days more than a thousand years ago. 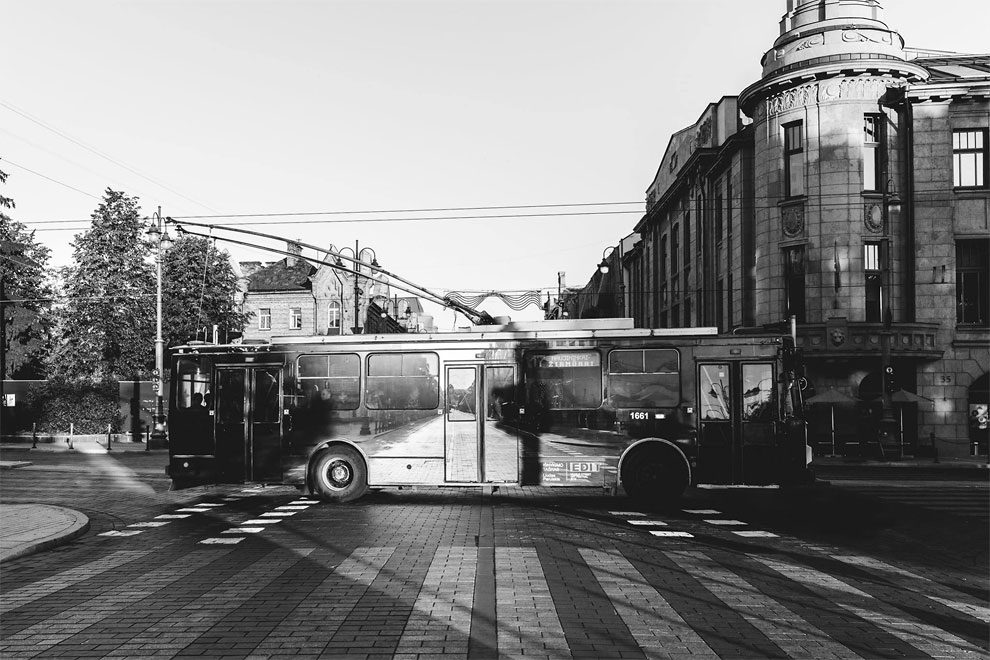 The audience is invited to observe and catch the trolleybus at it’s vanishing point and capture the moment. 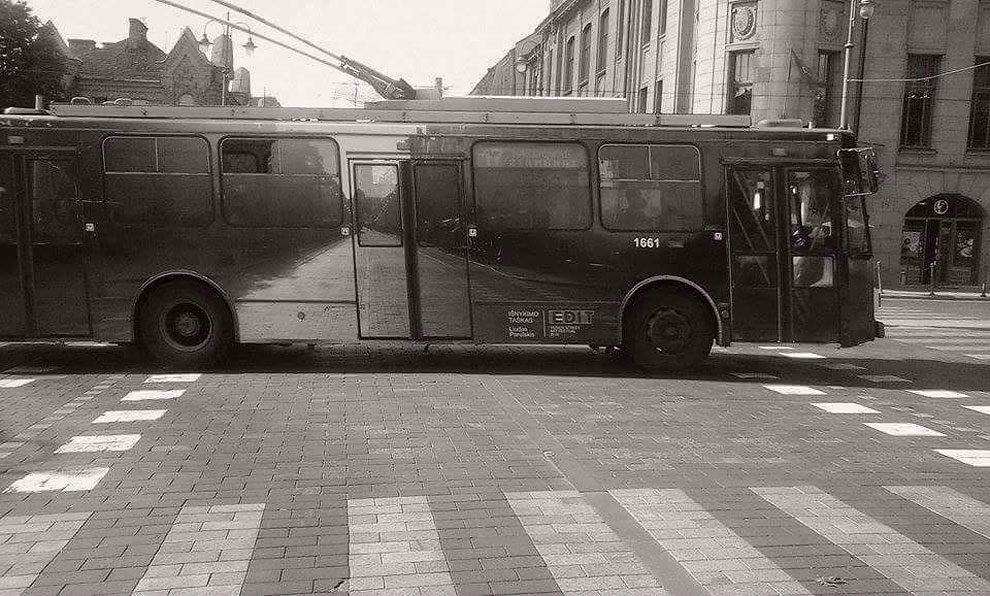 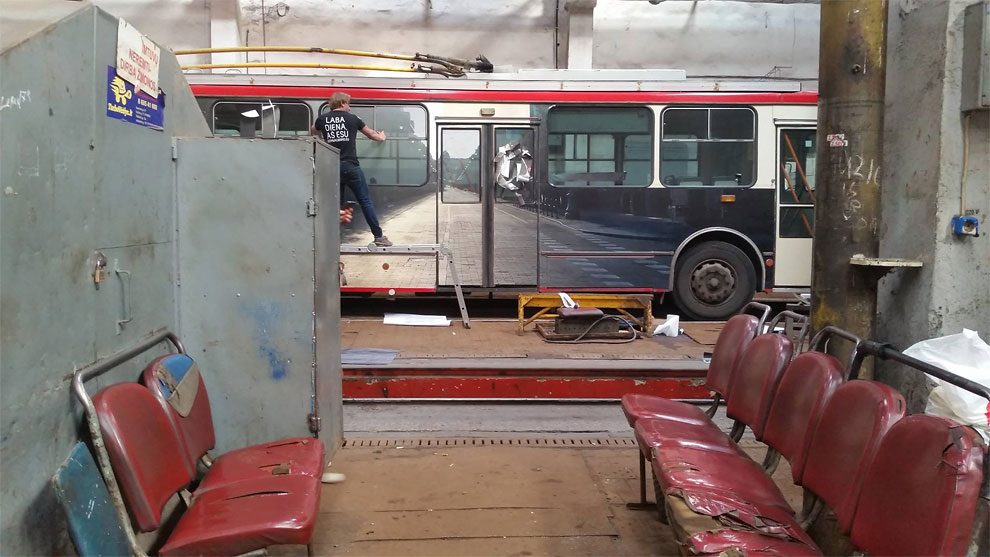 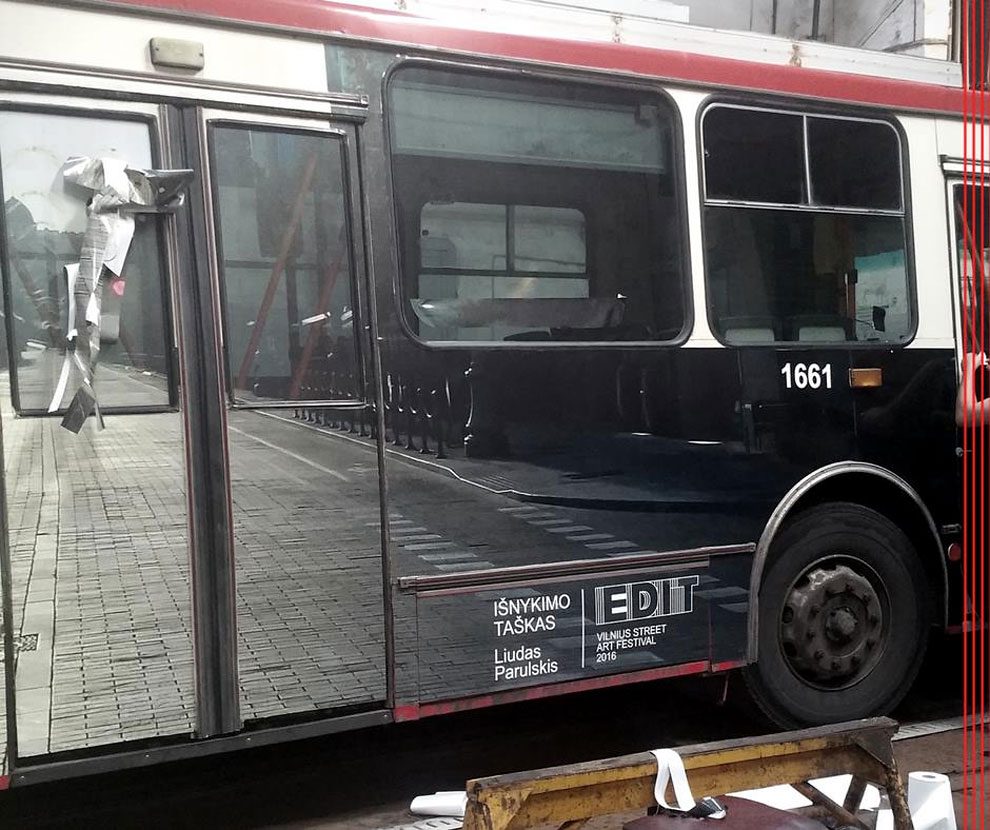 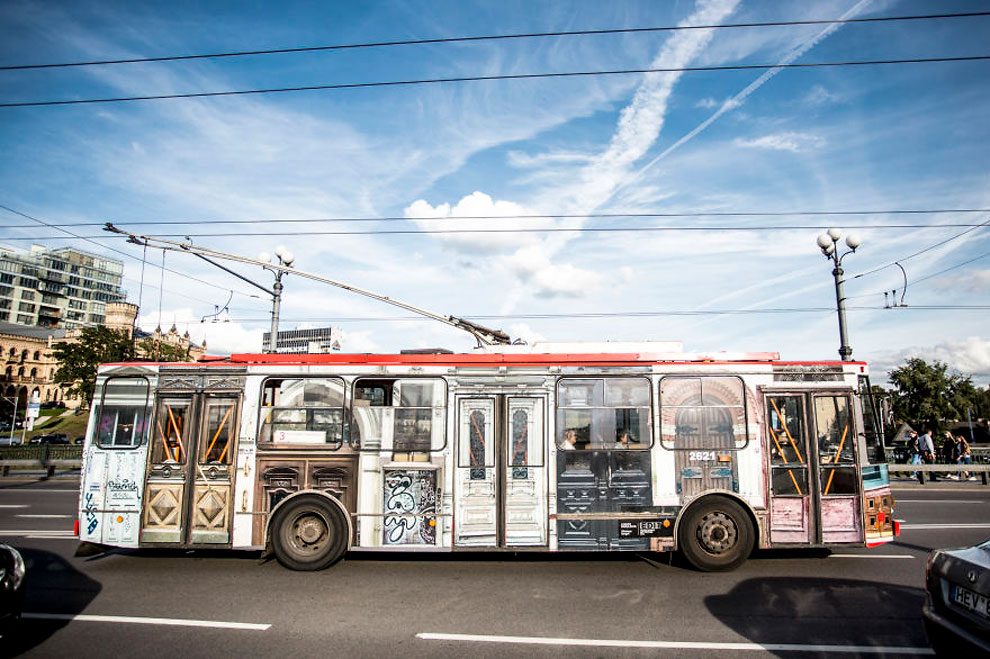 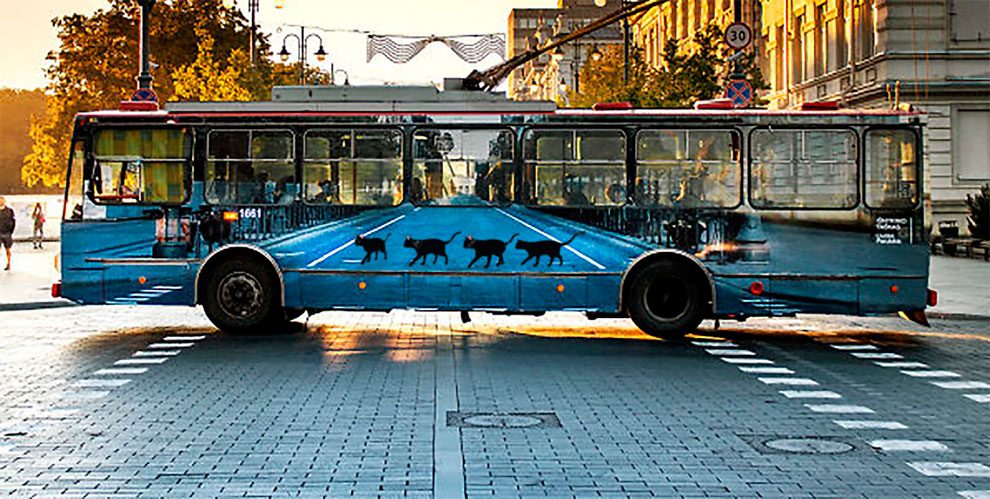 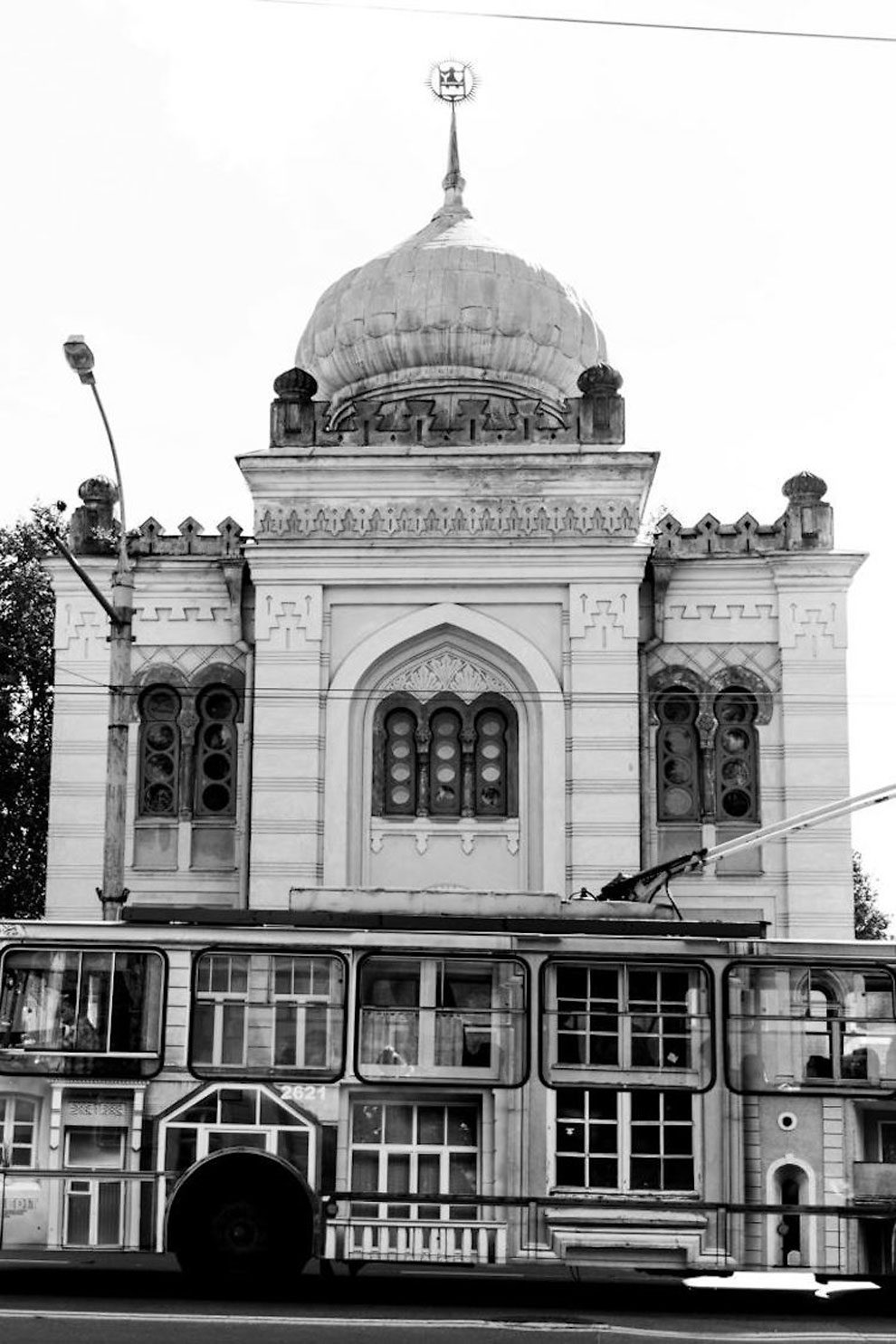 Japanese Master Restores Old Books
Cyberpunk Kimono Fashion Hits the Streets of Akihabara, Complete with Neon Sign Obi
Warsaw-Based Artist Spray-Paints A Beautiful Lace Mural On The Side Of A French Lace Museum
This Rug Is Designed To Create An Optical Illusion That Looks Like There’s A Hole In The Floor
Artists Raid A Polish Scrapyard To Build A Collection Of Recycled Metal Super Cars
Life-size Dog Sculptures Made Entirely From Recycled Bicycle Chains
Seven Trolls And A Magical Tower Built From Recycled Materials Make Up A Fairy Tale In A Belgian Forest
This Bulbous Rain Barrel Design Makes It Easy To Collect Rainwater
Designer Conceived A Bottle That Indicates For Each Town Where To Find A Drinking Water
Japanese Artist Turns Ordinary Things Into Epic Action Figures
ASOS Are Selling 'Body Bows' And People Are Very Confused
1950s Airstream Trailer Restored as Modern Mobile Home with Cozy Wood Interior
A Wrecked Luxury Car Built From Over 12,000 Reflective Steel Parts
Dragon Scale Crochet Gloves For When The Winter Comes
Giant Cockroach Float: Is That A Cockroach In The Pool?
These Guys Make Neighborhood Laugh with Creative Fence Windows for Dogs
Incredible Sculptures Made Out Of Folded Paper Inspired By The 3D Characters Created In Video Games
Street Art Sculptor “Unzips” A Building In Milan For Mind-Bending Art Installation
This Guy Gets A Permanent Eyeglasses Tattoo
Inspired By Nature, This Artist Upcycle Faux Fur Fabric By Sewing It Into Realistic-Looking Animals
Teabags Designed To Look Like A Goldfish Is Swimming In Your Mug
Photos Show Chinese Factory Workers Making ‘Trump 2020’ Flags
"Submerged": New Underwater Artworks By Jason deCaires Taylor
Traffic Sign In Texas Displays Witty Warnings Of Global Warming
"The Moon In Your Hands": The Only One Leather Handbag That Captures The Complex Surface Of The Moon In Its Texture
Swedish Artist Is ‘Vandalizing’ Streets With His Stunning Pixel Art
These Themed Christmas Trees Are Made From Old Magazines
Anime Style Body Paint Model Dazzles With The Most Colorful Fashion In Japan
This Chameleon Cake Can Change Colour Due To One Amazing Bakery Technique
Artist's Incredible Hand-Painted Clay Sculptures Look Like Whimsical Illustrations
artist, lithuanian, makes, point, trolleybuses, vanishing