The Last Of The Kings: Very Sad Photos Of The Hard Life Of Congolese Gorillas 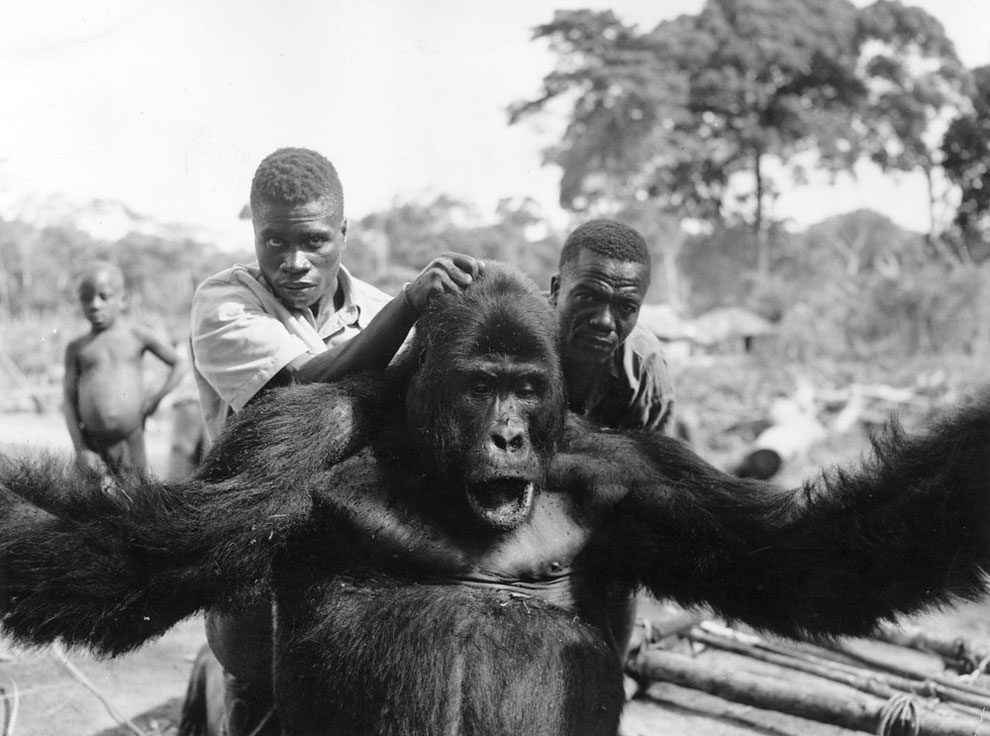 Photo by H. Goldstein/Central Press
A gorilla being marched along immediatedly after its capture in the Belgian Congo, circa 1960. 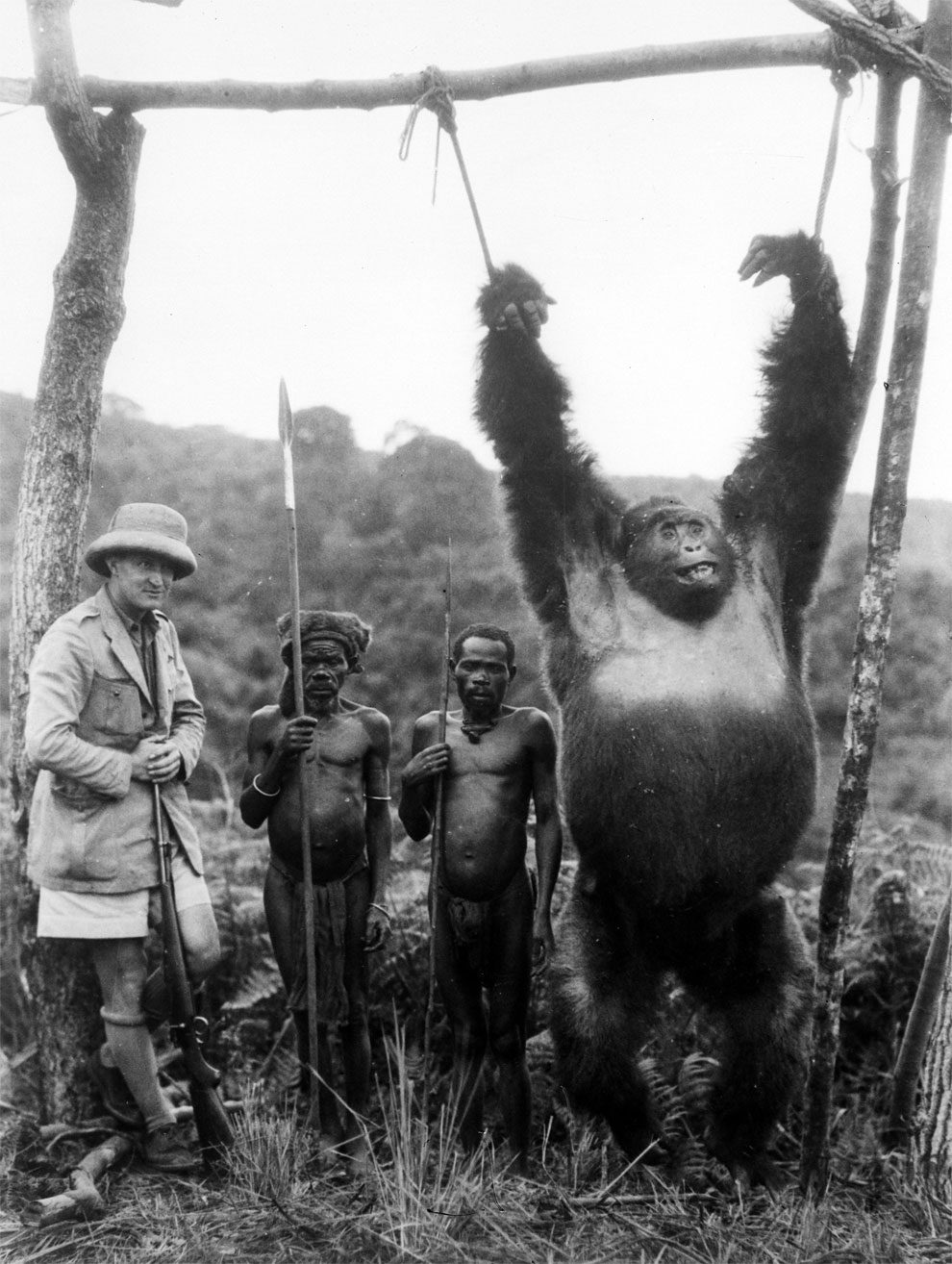 Photo by General Photographic Agency
British captain A. Gatti and two pygmies with a 500lb gorilla strung from a pole, which the captain shot in the Tchibinda forest in the Lake Kivu region, Democratic Republic of the Congo, circa 1930. 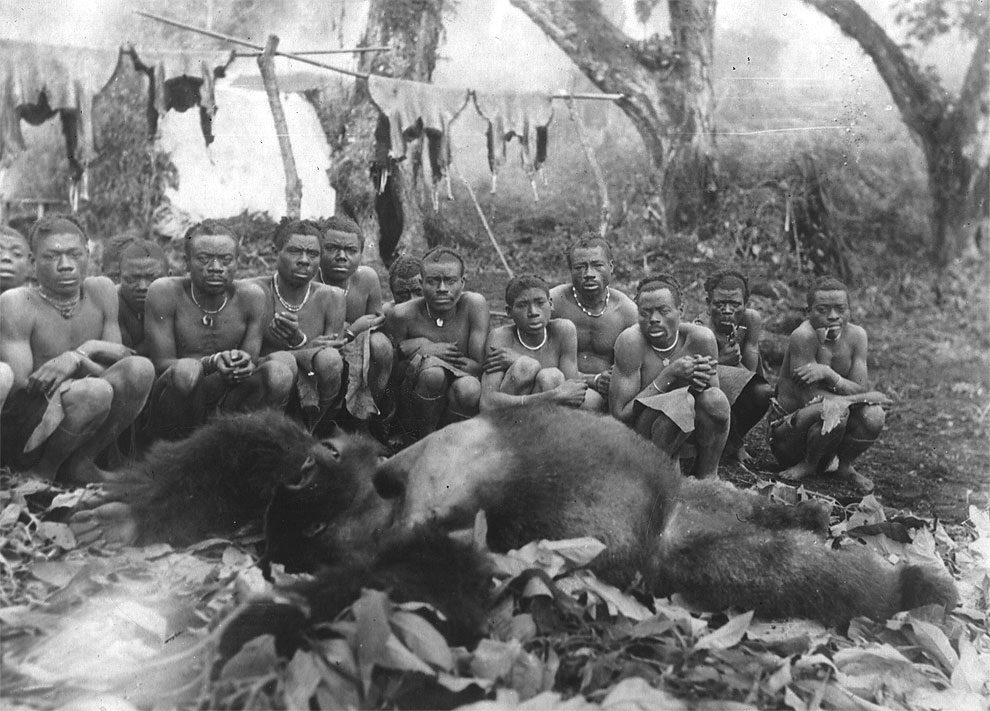 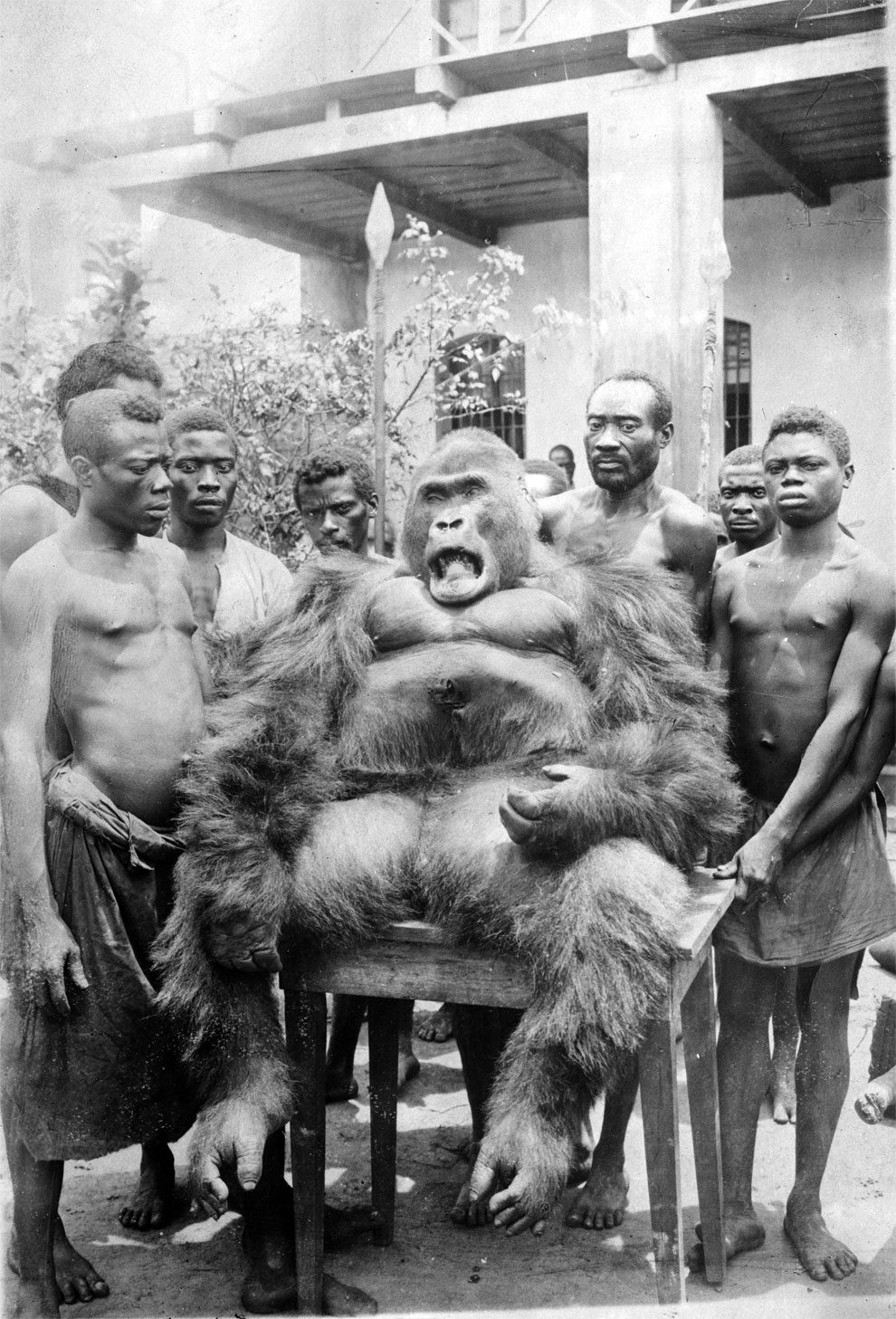 Photo by General Photographic Agency
Tribesmen stand by a captive gorilla, circa 1925. 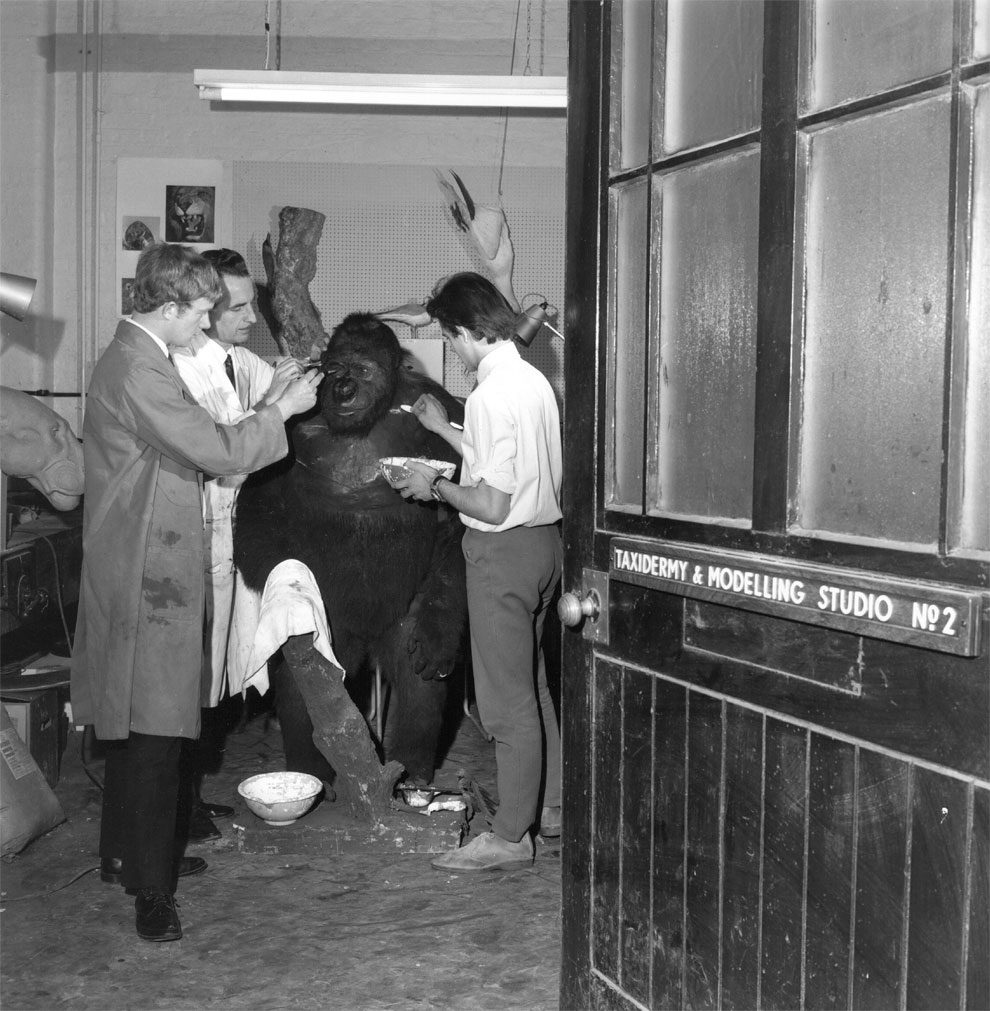 Photo by Chris Ware/Keystone Features
Taxidermists at work stuffing a gorilla at the Natural History Museum in London, 1968. 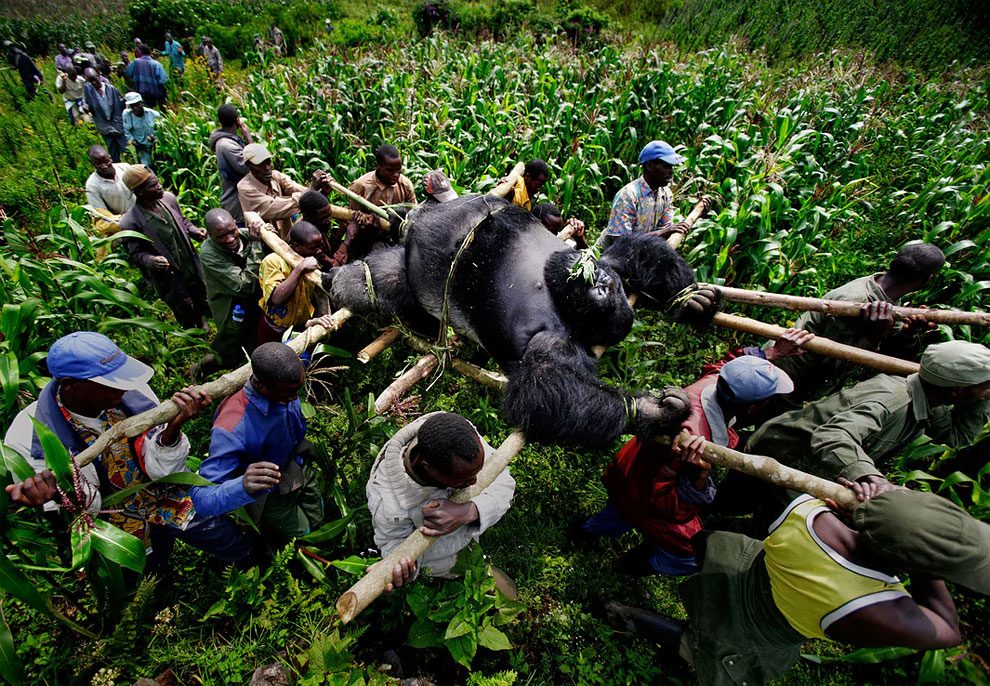 This Monkey Street in Bangkok is Full of... Street Monkeys, and They're Frisky!
Hundreds Of Dogs And Puppies Live In Chernobyl—And You Can Adopt One
2020 Pooping Dogs Calendar Is Here
Alabama Hunters Haul in 1,000-Pound Alligator
Cheerful Portraits Of Cats Shaking Themselves Clean
Monkey Selfie
The Good Person of Aleppo
Bear Smells Brownies — And Does Whatever It Takes To Get Some
People Are Submitting Pics Of Their Pets To This Instagrammer, And She Gives Them Hilarious Makeovers
These Portraits Reveal The Incredibly Humanlike Expressions Of A Variety Of Apes
Taiwanese Shop Owner Installed A Glass Ceiling For His Cats And Now They Won’t Stop Staring At Him
Indian Photographer Nitish Madan Captures Breathtaking Moments From The Lives Of Tigers
Airport Offers Dog Therapy to De-Stress Passengers
Real Life Teddy Bear’s Picnic: Model and Her Daughter Pose in Cute Snaps with Huge Brown Bear
Stunning Images Of The Marine Seals Were Captured By A Diver Who Did Well To Hang Onto His Camera When One Of The Seals Attempted To Take A Bite Out It
The Oldest Captive Orangutan in the World
Thecacera Pacifica: The Pikachu Of The Sea
Using a Strip of Paper To Give Birds Funny Eyes Is Ingenious
Not Quite Thigh High
This Man Drives Several Hours Everyday To Bring Water To Thirsty Wild Animals
The Alley Cats: Photographer Nayan Khanolkar Captures Leopards In The Middle Of Mumbai
Flying with Man's Best Friend
80-Year-Old Man Builds A Dog Train To Take Rescued Stray Dogs On Adventures
Kennel Club Dog Photographer Of The Year 2016
This Deformed Dog Is Still In Good Spirits Despite Suffering Horrific Abuse
Photographer Sabrina Boem Beautifully Captured The Monorail Cats
Toucan Beaten By Teenagers Shows Off New 3D Printed Prosthetic Beak
Flocks of Sheep Take over London's Savile Row
January 10 – 16: Animals
Sculpture Of Istanbul’s Social Media Phenomenon Cat Tombili To Be Inaugurated
congolese, gorillas, kings, photos