Rare Photos Of Hachiko, The World’s Most Loyal Dog 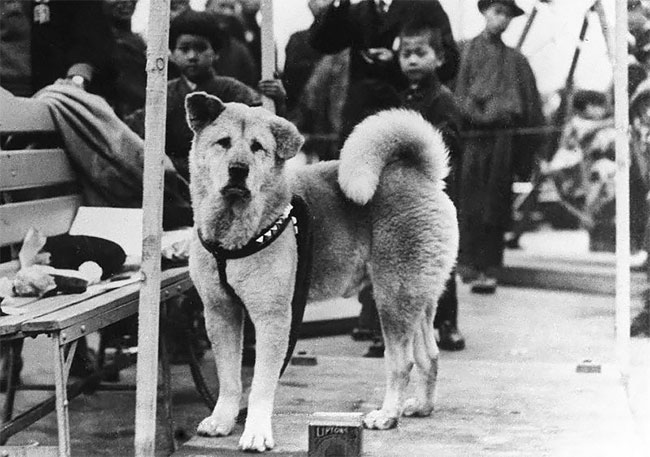 Hachiko, a golden brown Akita, was born on November 10, 1923 at a farm located in Ōdate, Akita Prefecture, Japan. In 1924, Hidesaburō Ueno, a professor in the agriculture department at the Tokyo Imperial University, took Hachikō as a pet and brought him to live in Shibuya, Tokyo.

Ueno would commute daily to work, and Hachikō would leave the house to greet him at the end of each day at the nearby Shibuya Station. The pair continued the daily routine until May 21, 1925, when Ueno did not return. The professor had suffered a cerebral hemorrhage, while he was giving a lecture, and died without ever returning to the train station in which Hachikō waited. 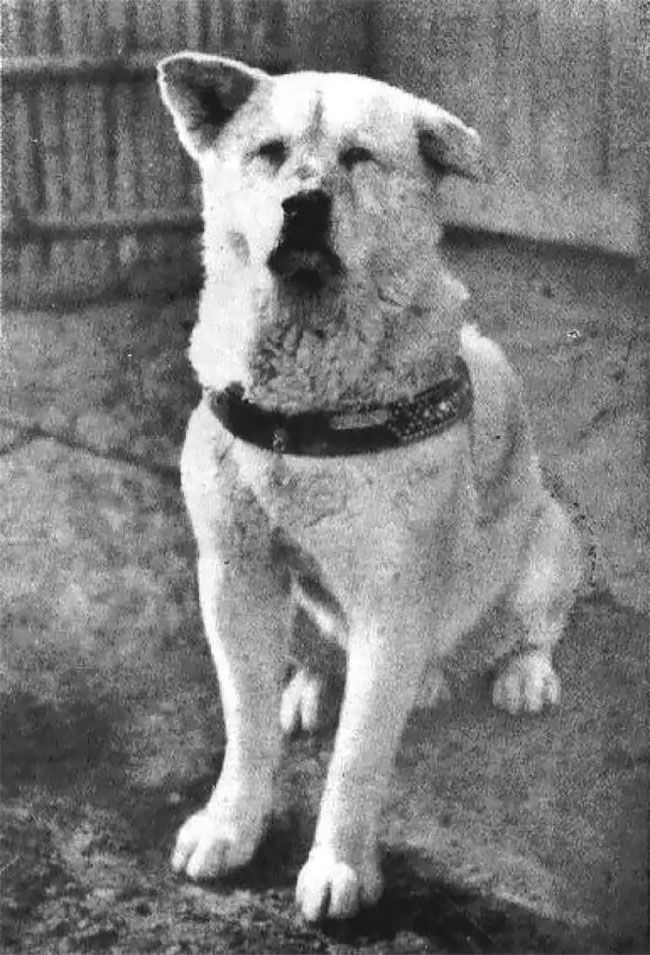 Each day, for the next nine years, nine months and fifteen days, Hachikō awaited Ueno’s return, appearing precisely when the train was due at the station. 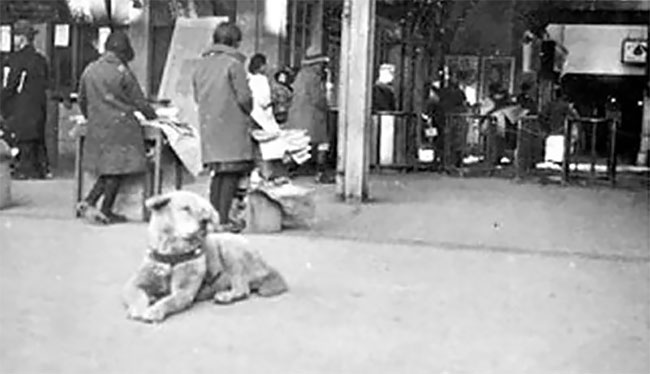 Hachikō attracted the attention of other commuters. Many of the people who frequented the Shibuya train station had seen Hachikō and Professor Ueno together each day. Initial reactions from the people, especially from those working at the station, were not necessarily friendly. However, after the first appearance of the article about him in Asahi Shimbun on October 4, 1932, people started to bring Hachikō treats and food to nourish him during his wait. 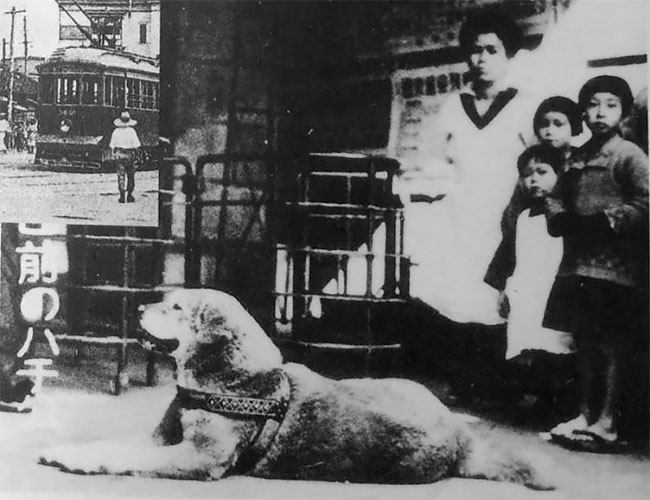 One of Ueno’s students, Hirokichi Saito, who developed expertise on the Akita breed, saw the dog at the station and followed him to the home of Ueno’s former gardener, Kuzaboro Kobayashi, where he learned the history of Hachikō’s life. Shortly after the meeting, the former student published a documented census of Akitas in Japan. His research found only 30 purebred Akitas remaining, including Hachikō from Shibuya Station.

He returned frequently to visit Hachikō, and over the years he published several articles about the dog’s remarkable loyalty. In 1932, one of his articles, published in Asahi Shimbun, placed the dog in the national spotlight. 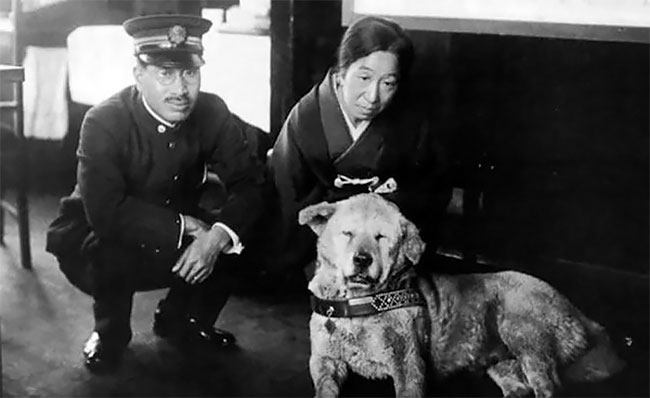 Hachikō became a national sensation. His faithfulness to his master’s memory impressed the people of Japan as a spirit of family loyalty to which all should strive to achieve. Teachers and parents used Hachikō’s vigil as an example for children to follow. A well-known Japanese artist rendered a sculpture of the dog, and throughout the country, a new awareness of the Akita breed grew. 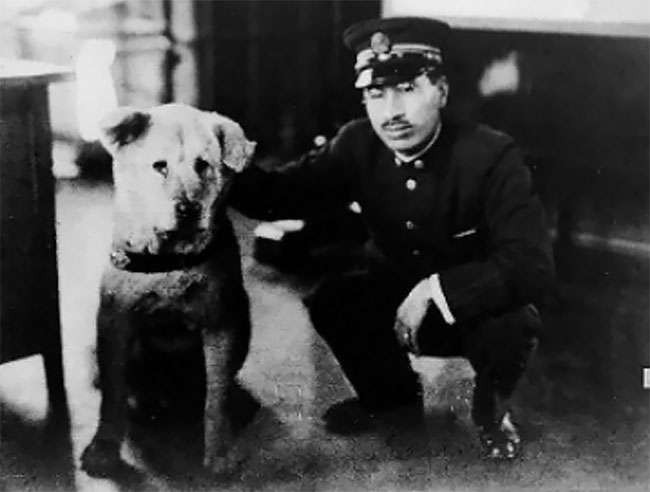 Eventually, Hachikō’s legendary faithfulness became a national symbol of loyalty, particularly to the person and institution of Emperors. 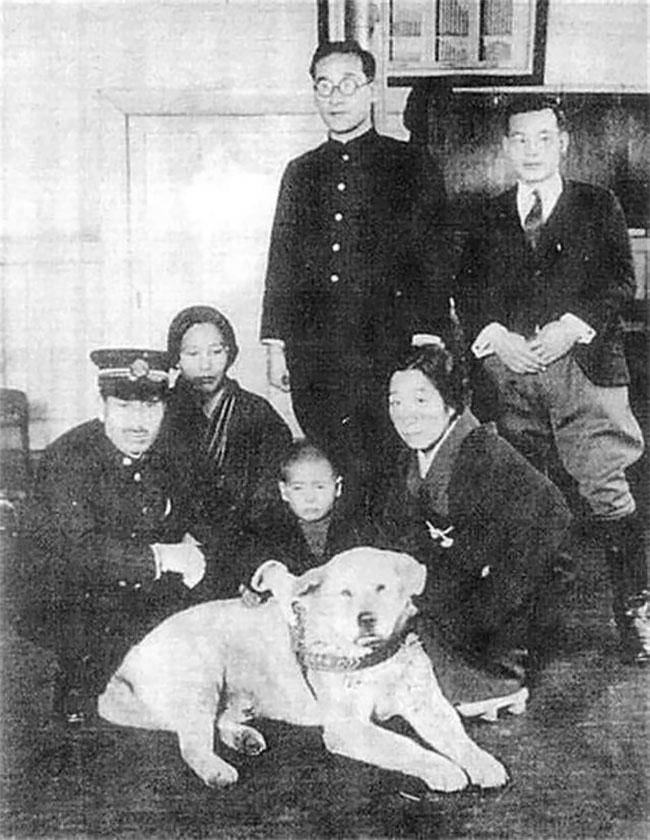 Hachikō died on March 8, 1935 at the age of 11. He was found on a street in Shibuya. In March 2011, scientists finally settled the cause of death of Hachikō: the dog had both terminal cancer and a filaria infection. There were also four yakitori skewers in Hachikō’s stomach, but the skewers did not damage his stomach nor cause his death. 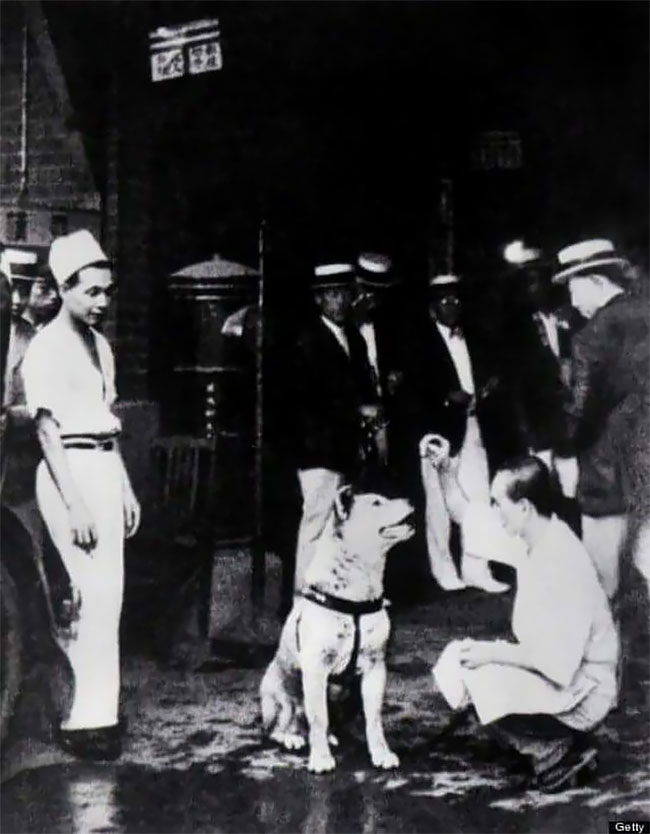 After his death, Hachikō’s remains were cremated and his ashes were buried in Aoyama Cemetery, Minato, Tokyo where they rest beside those of Hachikō’s beloved master, Professor Ueno. Hachikō’s fur, which was preserved after his death, was stuffed and mounted and is currently on permanent display at the National Science Museum of Japan in Ueno, Tokyo. 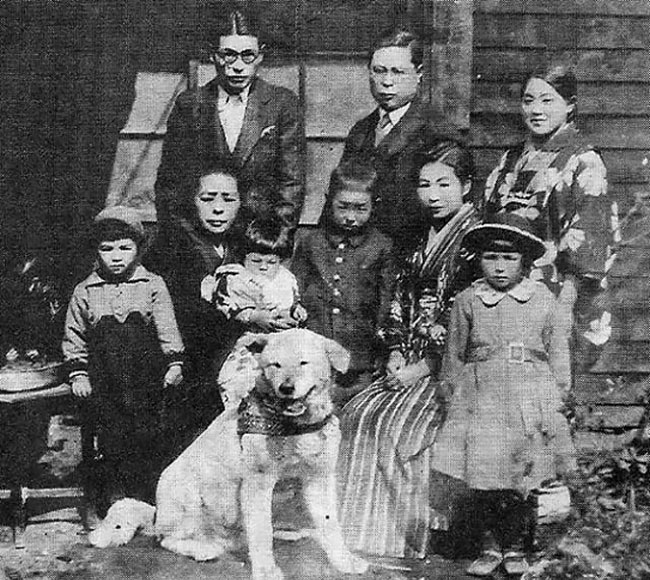 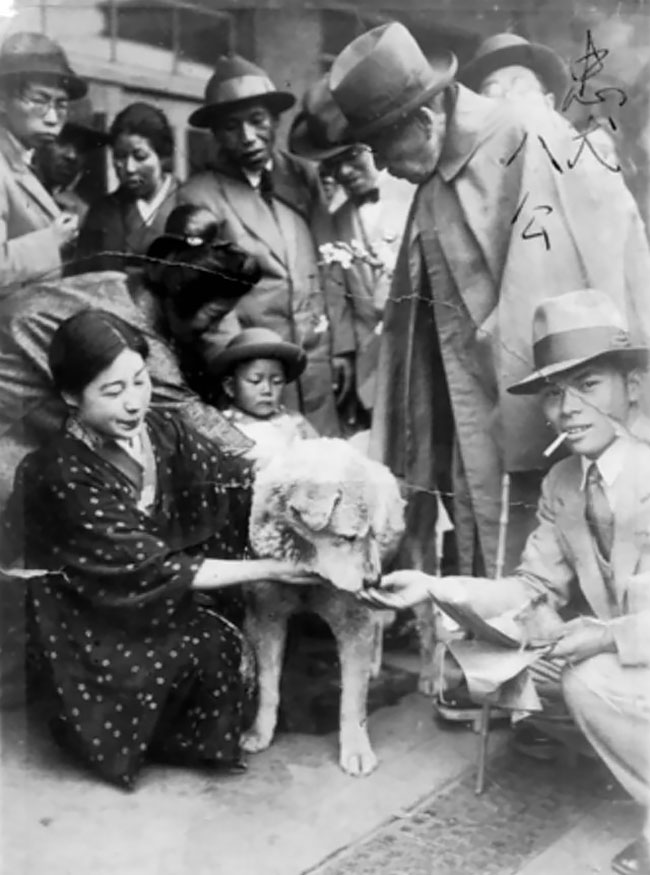 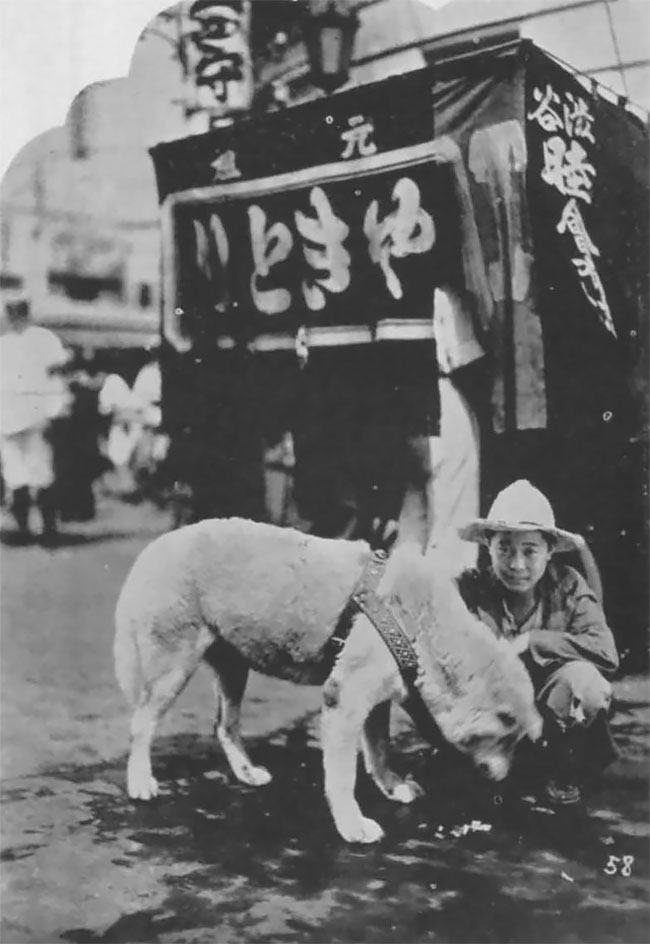 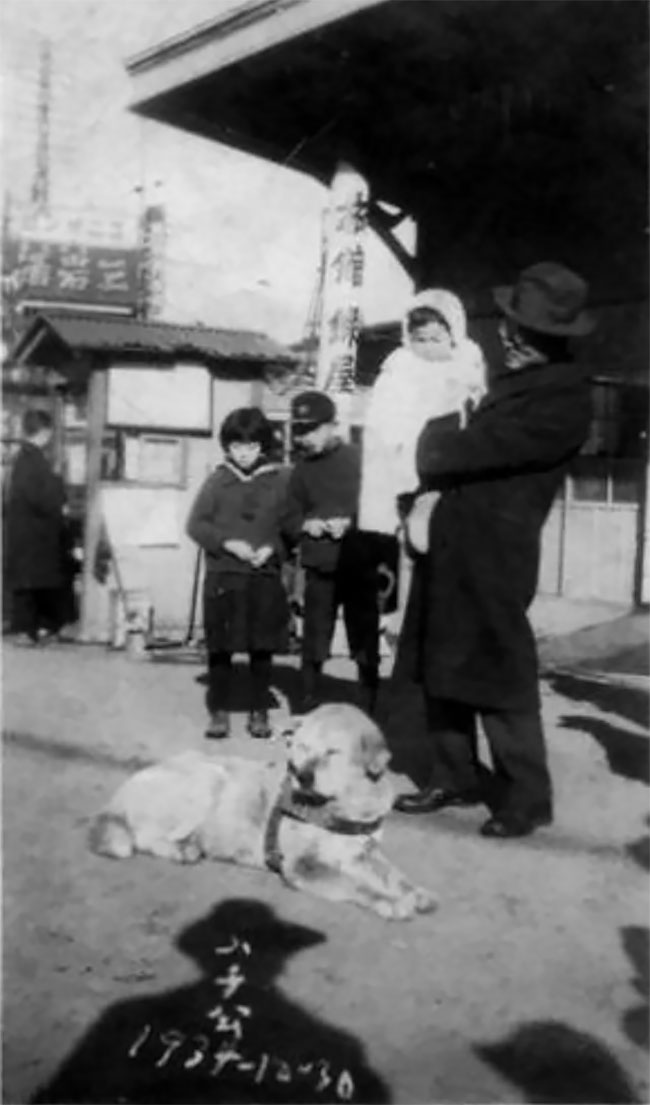 Last known photo of Hachikō – pictured with his owner’s partner Yaeko Ueno (front row, second from right) and station staff in mourning in Tokyo on March 8, 1935. 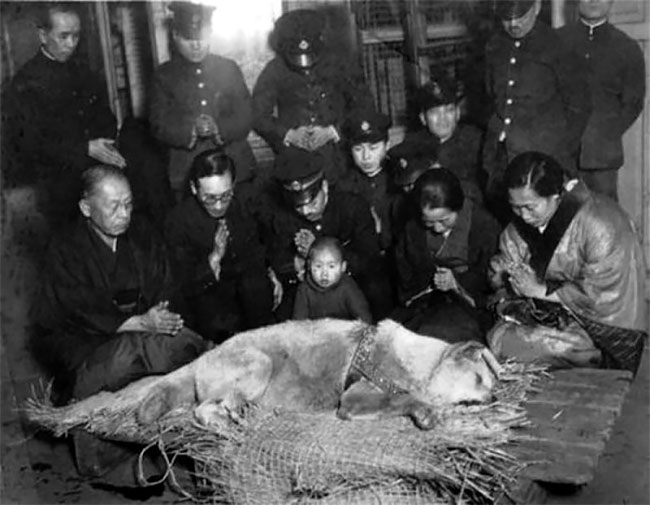 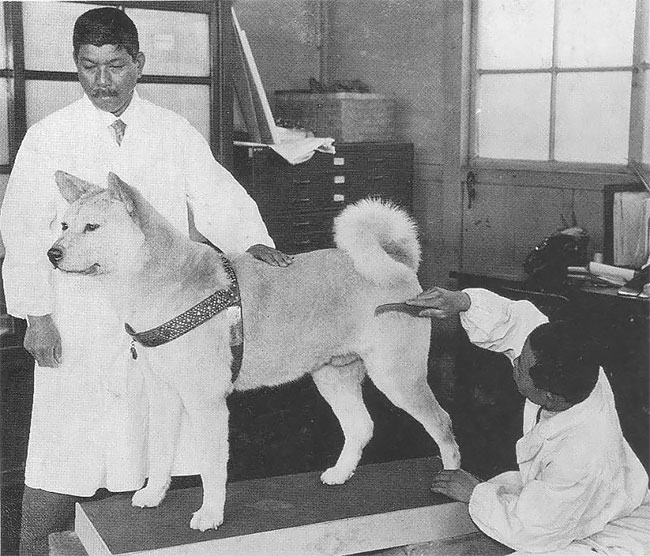 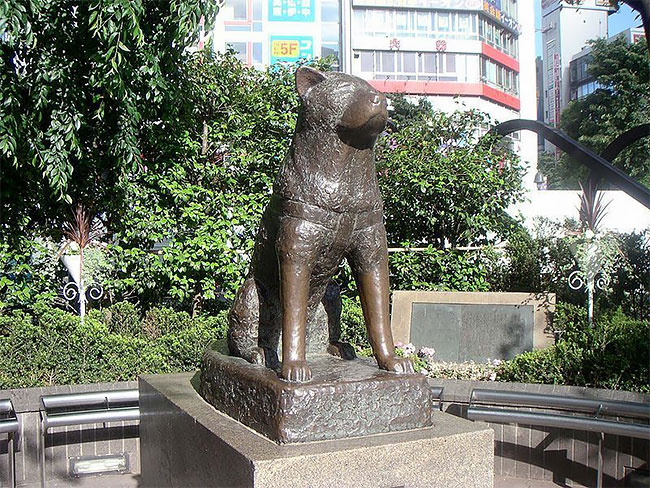 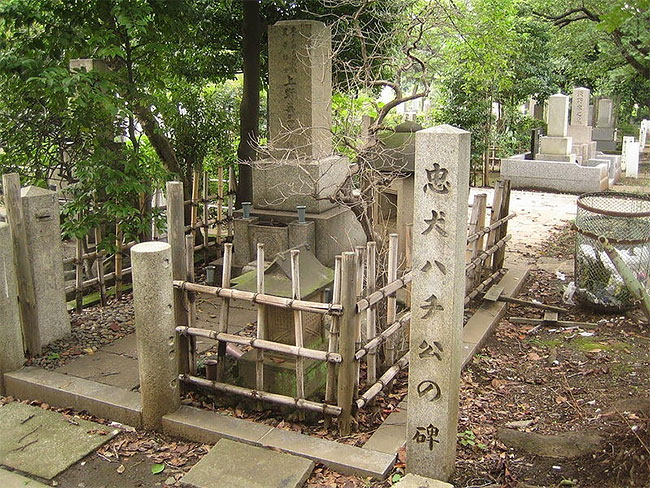 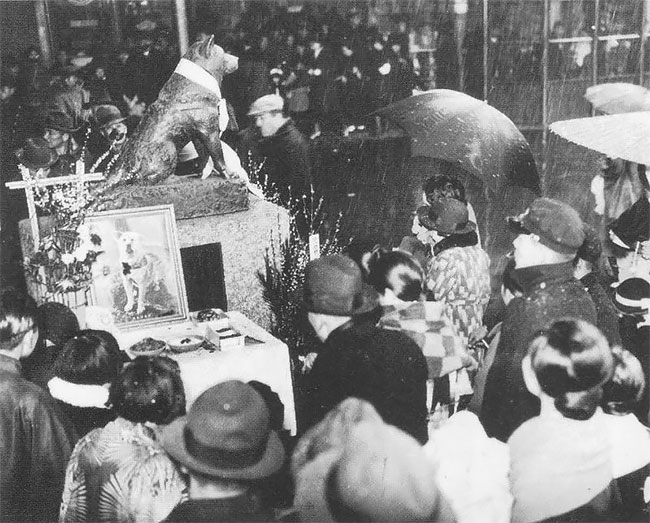 Guy Without A Date Does Epic Photoshoot With His Pug Instead
This Cat Table Gives Your Feline a Seat in the Table
Photographer Snaps A Frog ‘Horsing’ With A Beetle
PetCam: The World Through The Lens Of Our Four-Legged Friends
The World’s Most Romantic Gallery Of Insect Sex
Japanese Photographer Captures Breathtaking Shots of Shrine in A Swirling Sea of Fireflies
1986 Calendar Featuring Morris the Cat, the World’s Most Finicky Cat
This Is What Peacock Feathers Look Like Under A Microscope
Beautiful Photos Of Mali The Dog Enjoying Christmas Time
Low Resolution Pets Behind Pixelated Glass Doors
Reptiles – Life On White
Japanese Students Build Massive Boat Made Of Handmade Sweets
Incredible Bears Photography By Sergei Ivanov
Japanese Artist Makes Bento Boxes With Popular Anime Characters
Japanese Engineers Created a Huge Robot for Laying Railway Tracks and Performing Dangerous Work
This Clothing Brand Started Selling Matching Sweaters For Dogs And Their Owners And They’re Adorable
Perfect Imperfection: Photographer Documents The Beauty Of Animals With Disabilities
Catching a Ride
Plufl – The World’s First Dog Bed For Humans
Their First Steps
Oakland Zoo Lights Up its ZooLights
Check Out The Yorkshire Terrier That Will Give You Dream Hairstyle Goals
Animal Architects Bowerbirds Design
Japanese Illustrator Combines Animals and Vegetables to Make Charming Fairy Tale Creatures
dog, Hachiko, japan

Сat and Fox: Unlikely Friendship
Photographer Captures Cherry Blossom Path “Suddenly Appearing” In The Middle Of Tokyo
That Moment When Your Dog Has So Much Fur That You Can Practice Braiding With His Tail
The Dark, Droll and Devilish World of Illustrator Sakiyama
From Sailor Moon To Vincent Van Gogh’s “Starry Night”, This Teacher Surprises His Students With Stunning Chalkboard Art
Einstein: The World’s Smallest Horse
A Portrait Of Lost Habitats In Africa
This Dog Perfectly Recreated Madonna’s Iconic Photos
Cats Can Finally Destroy Priceless Artwork With These Masterpiece Scratching Posts
The Free Ride - Crow Rides On The Back Of An Eagle
2007 ‒ 2022 by Design You Trust. Proudly hosted by WebHostingBuzz.
Privacy Policy · Terms of Service · Content Removal Policy ❤️ 🇺🇦