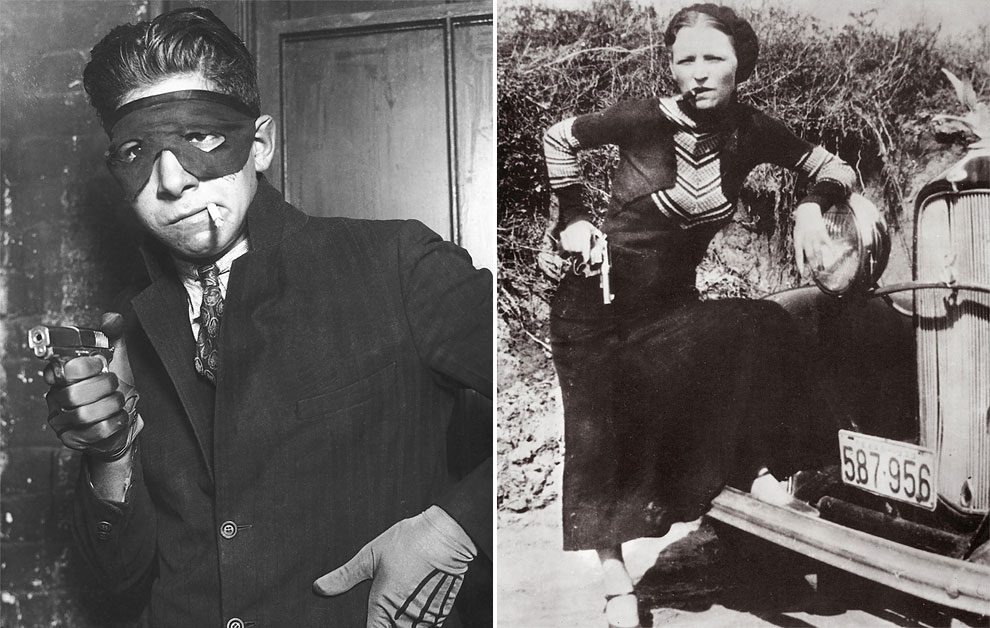 From cold-blooded murders to running battles with the police, these black-and-white pictures shed light on the brutal lives of gun-toting gangsters during the American Depression. The amazing images show notorious mobsters such as Al Capone who committed violent crimes in their search to get rich quick during the early 1930s.

A young man posing as a masked gunman, circa 1930: 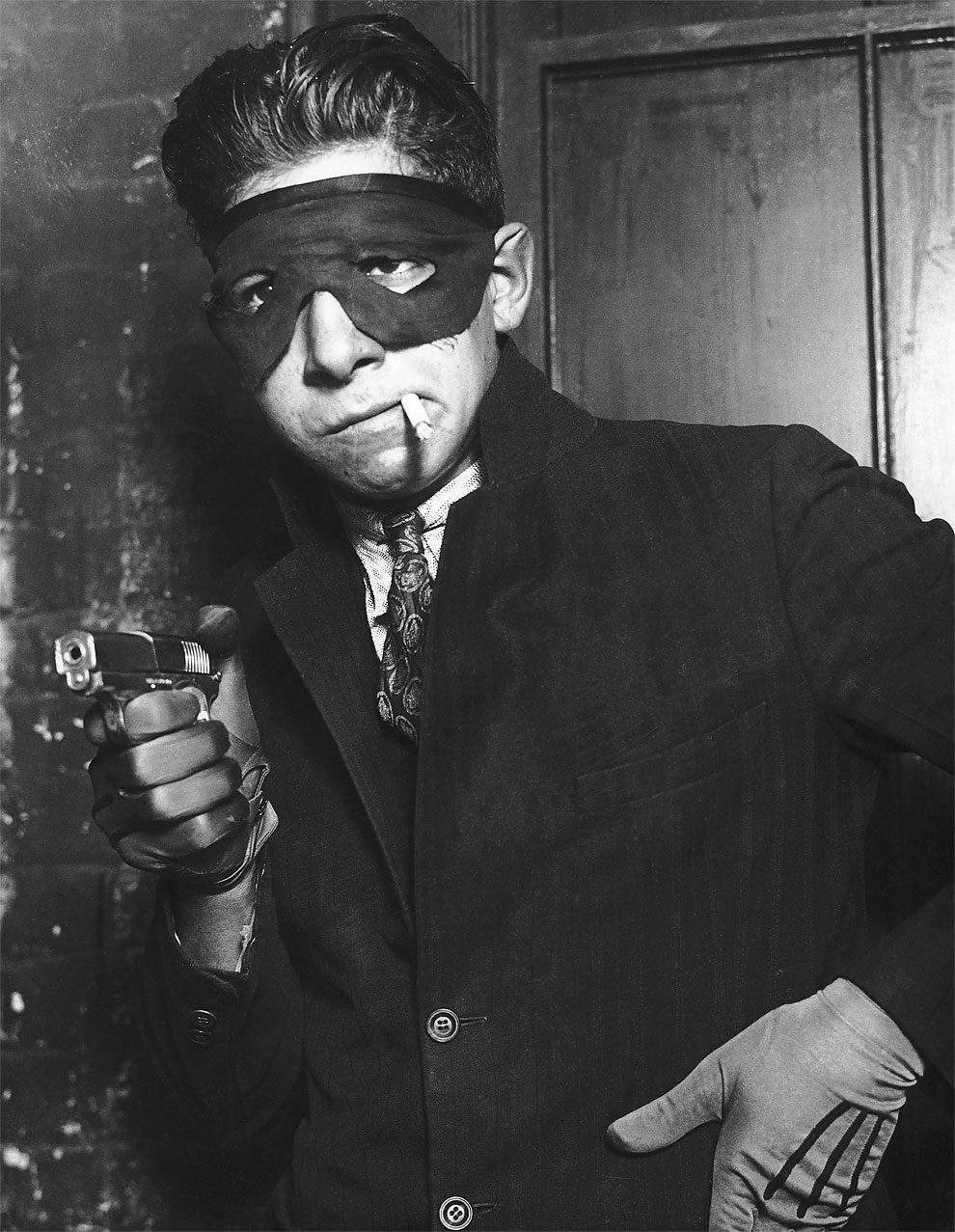 Full-length portrait of American criminal Bonnie Parker (1910 – 1934) smoking a cigar while leaning on the front fender of a car and holding a pistol on April 17, 1933: 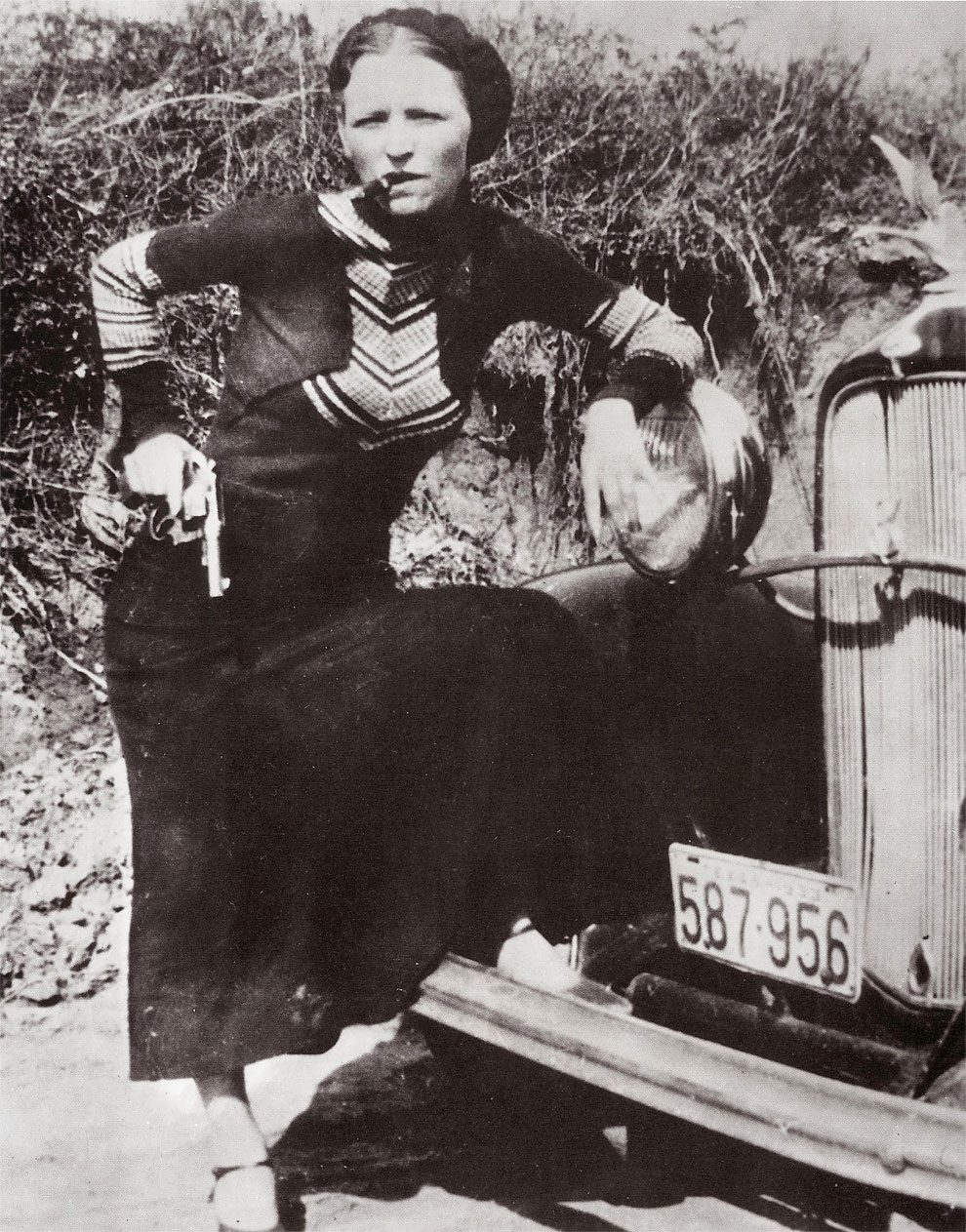 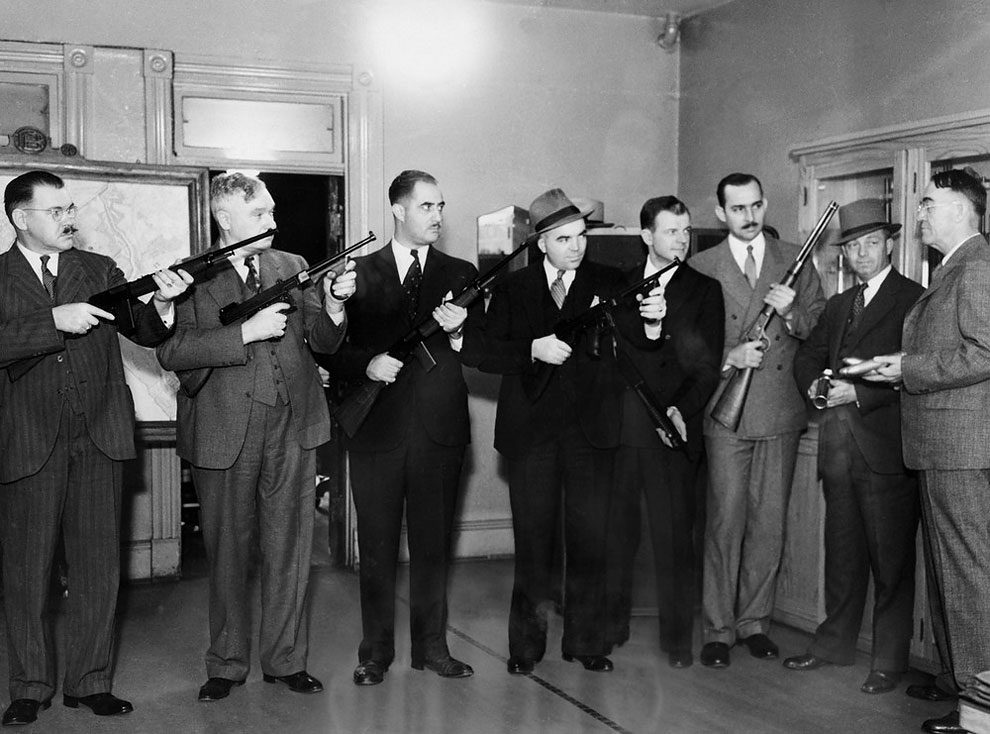 An armoured vehicle surrounded by Chicago cops at the time of the American depression, 1933: 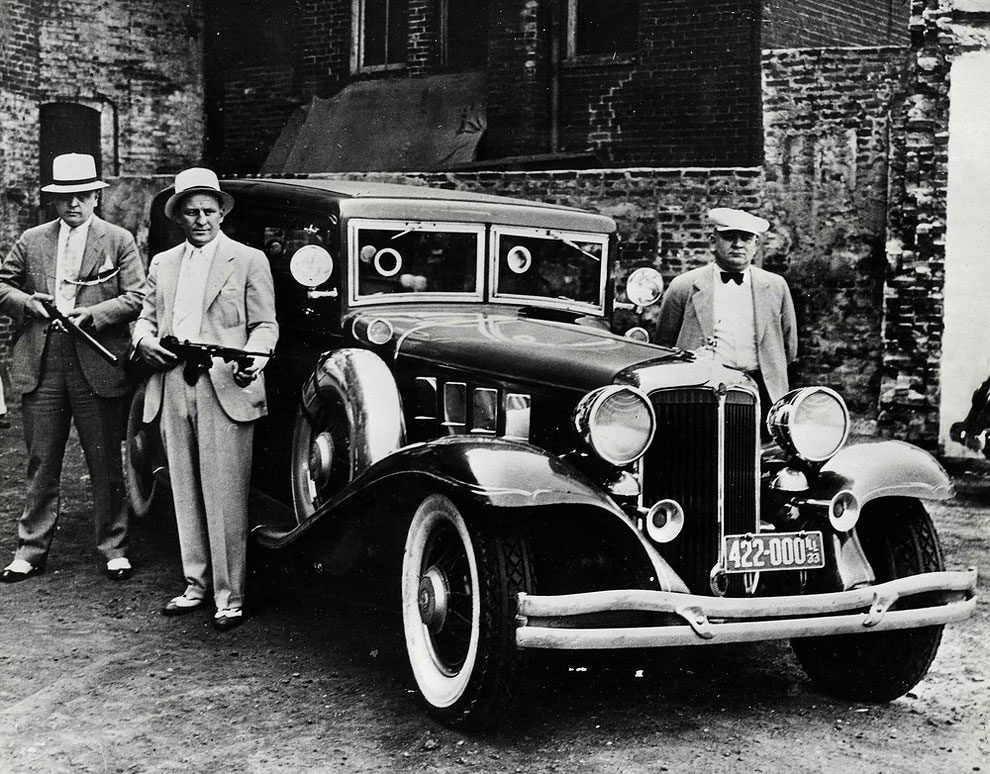 A group of men in suits and hats are obscured by the smoke from the guns, including Thompson submachine guns, shotguns, and revolvers, that they are firing in a shrubland, USA, 1930s: 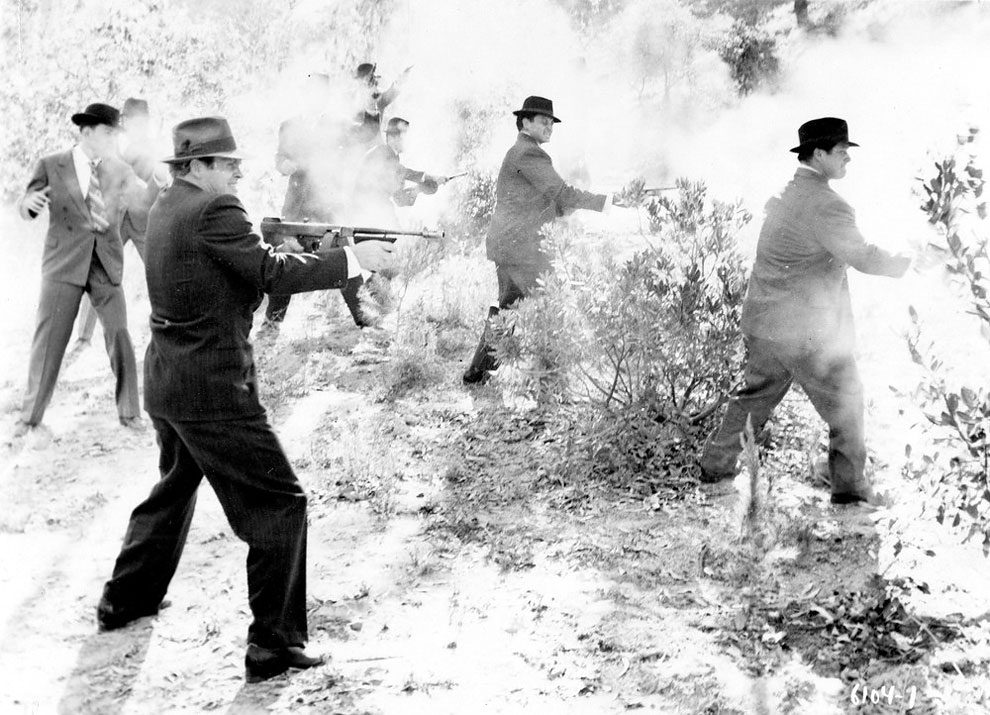 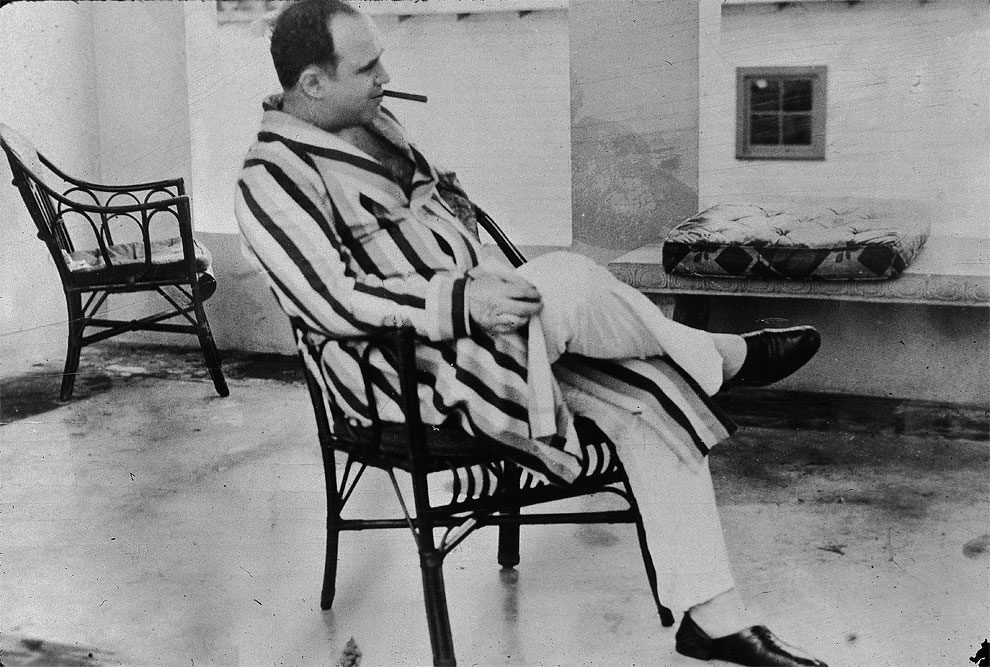 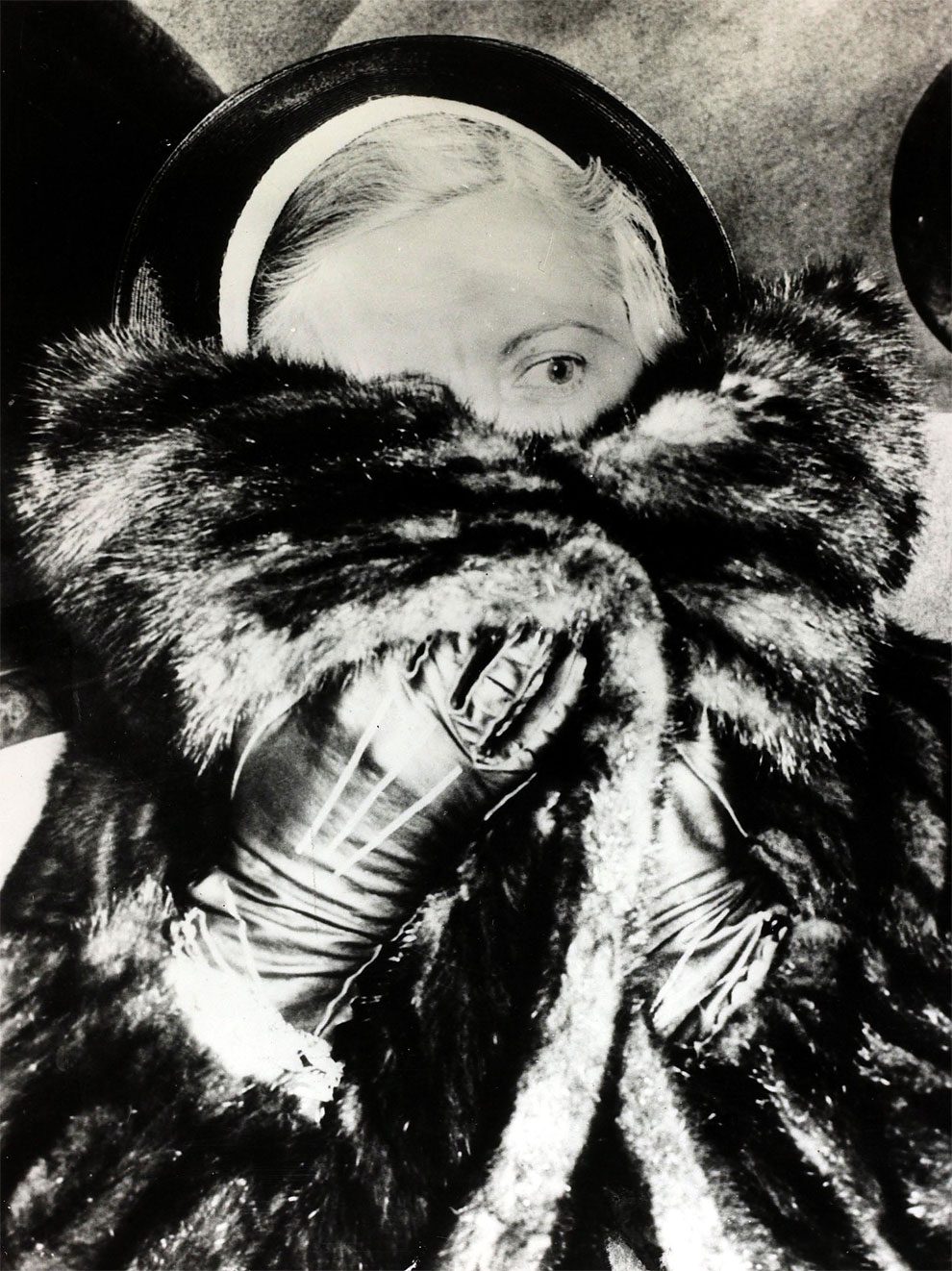 This sawed-off shotgun was carried in a violin case to the Port Newark National Bank in Newark, NJ on February 28, 1930. Three gunmen – determined to seize $25,000 – staged a wild west gun battle at the entrance of the bank in the center of the city, at 10:45 A.M. Osie Danneman, black messenger for the bank, was the hero, saving $25,000. Photo shows the violin-cased sawed-off shotgun: 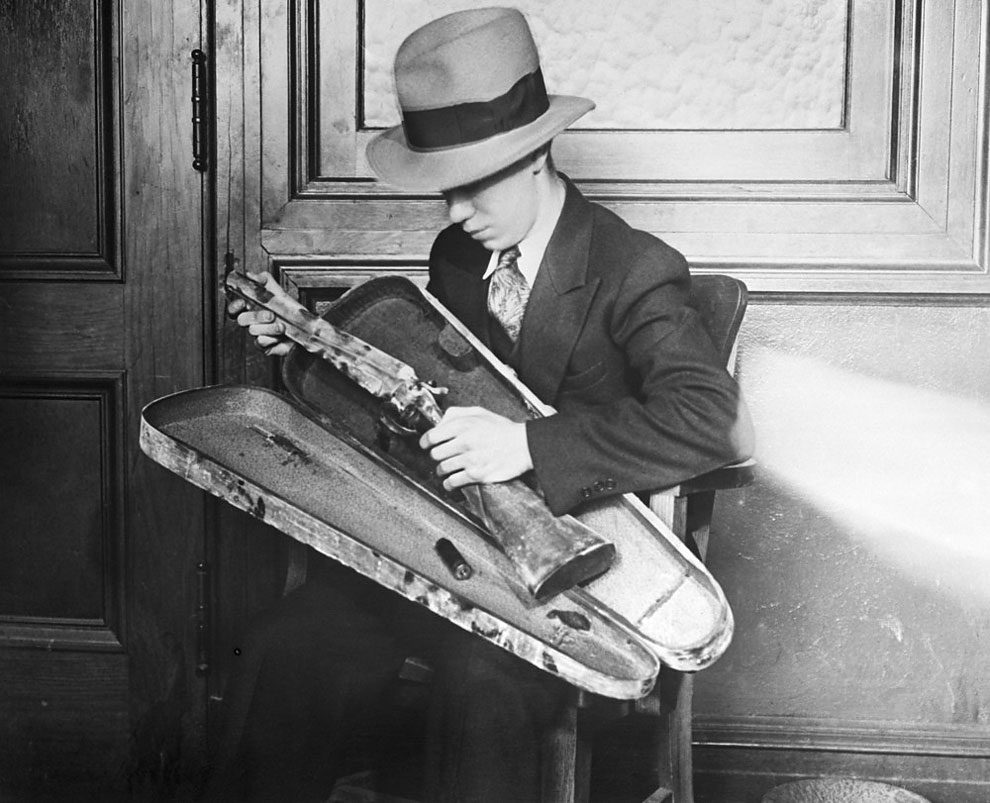 Police and Fireman’s Day display of a gangster’s car riddled by Thompson machine guns for ten seconds on September 24, 1930: 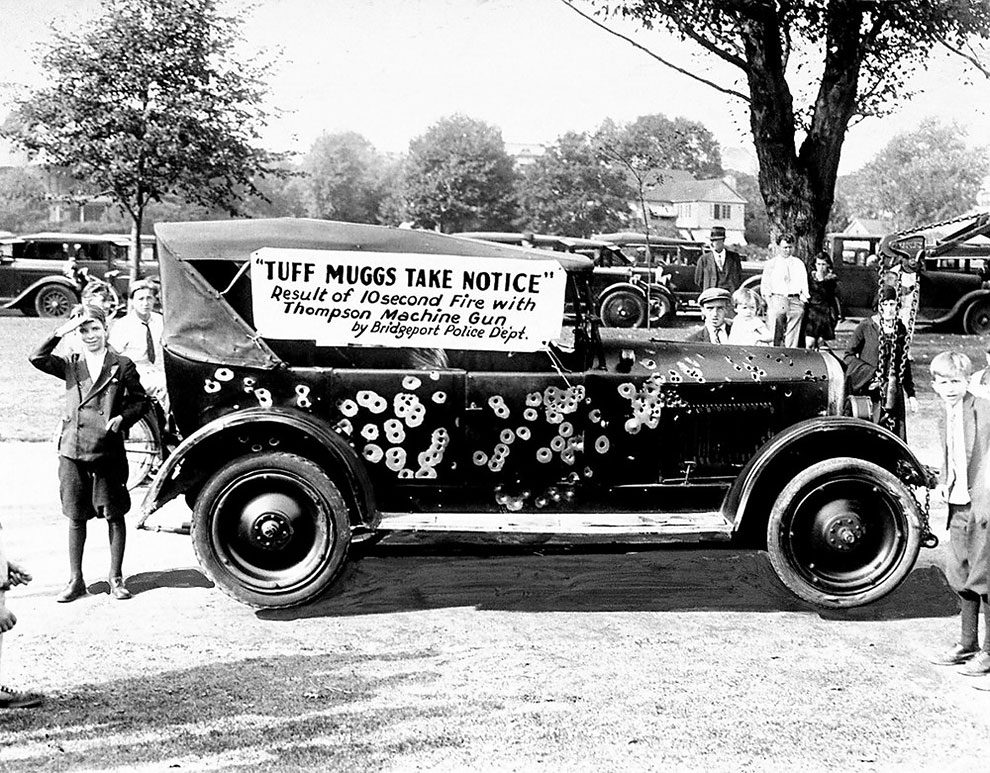 Primed for warfare, Chicago gangsters forced police to equip themselves with miniature arsenals to cope with gang wars. Deputy Chief Stege (right) hands out machine guns to detectives while Chief of Detectives Shoemaker (fourth from left) looks on, January 09, 1927: 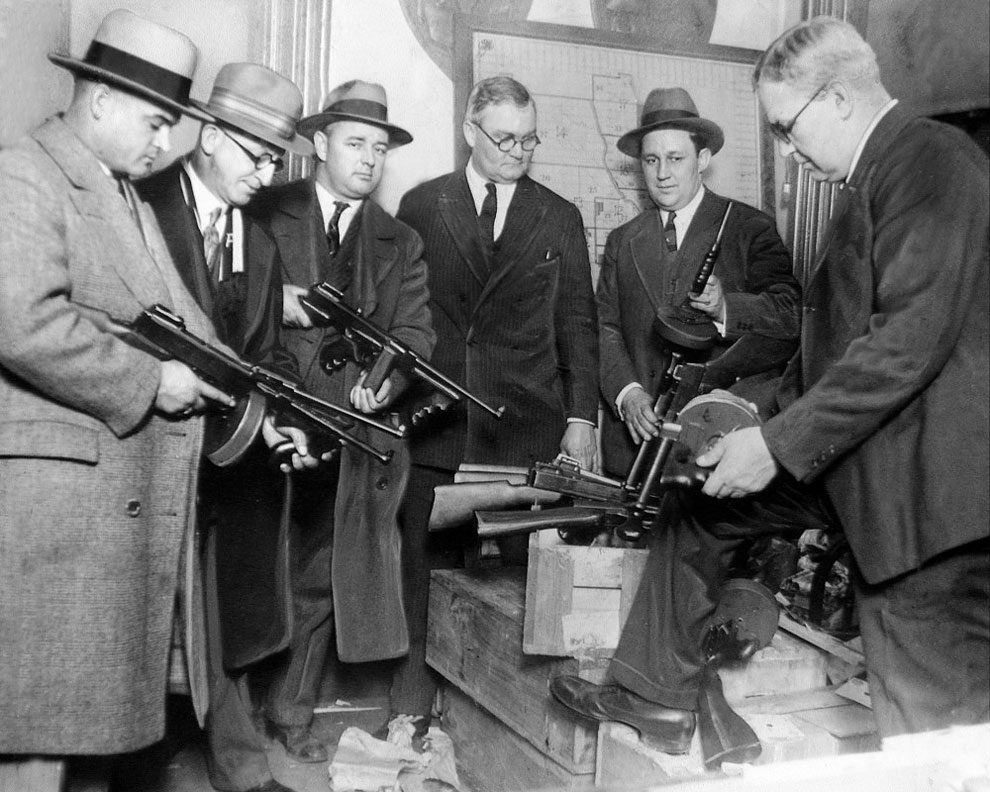 Lieutenant William Shoemacher stands and aims a Thompson machine gun, or tommy gun, Chicago, 1926. The gun, developed for World War I, was very popular with gangsters due to its high rate of fire. From the Chicago Daily News collection: 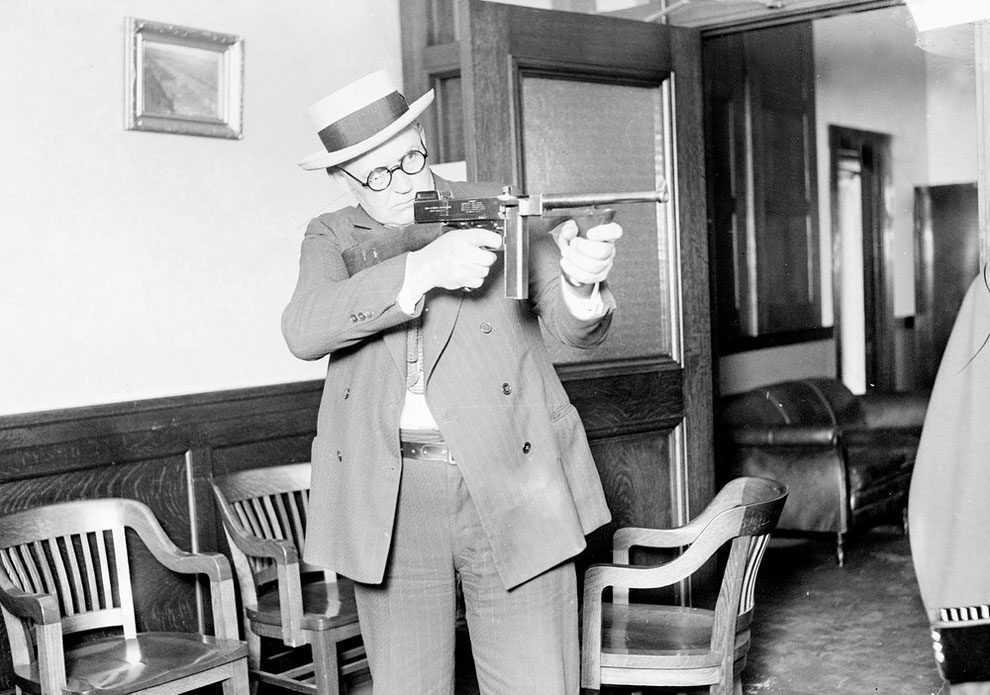 Edwin C. Arthur stands in the center of a collection of containers of moonshine taken during a South Side raid in Chicago, Illinois, 1922. From the Chicago Daily News collection: 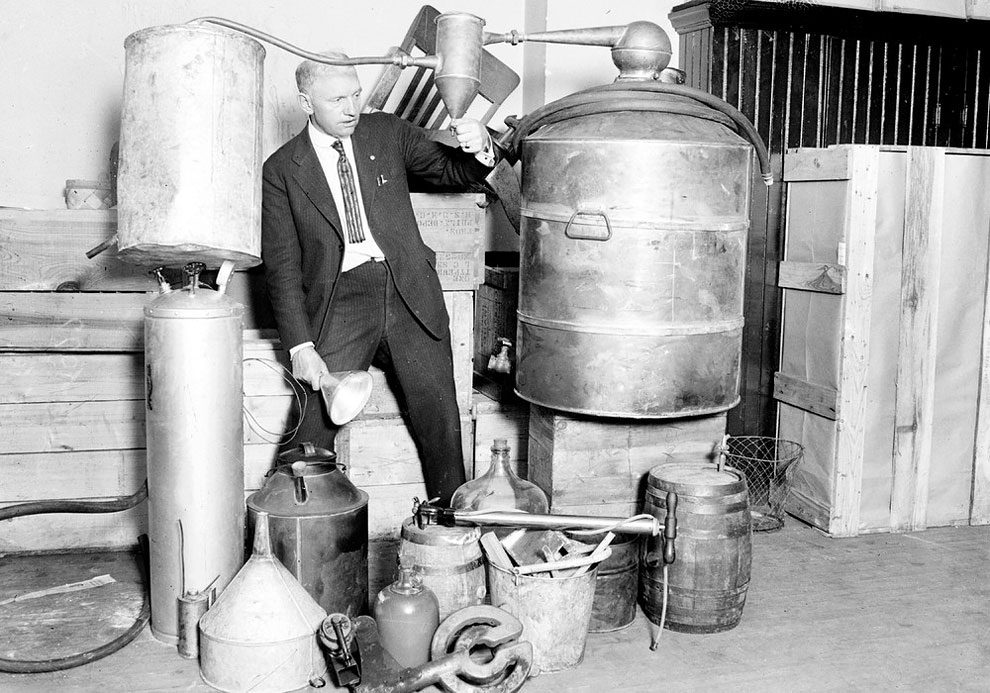 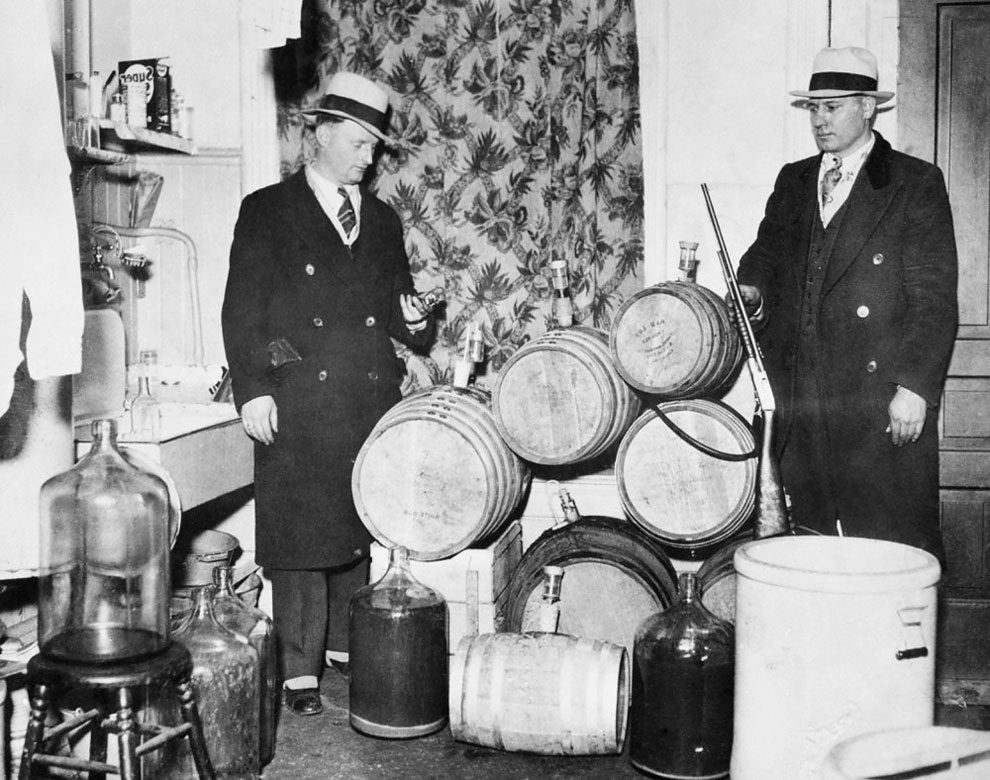 The body of noted gang chief Frankie Yale, who was born Francesco Ioele, lies beside his automobile at 44th Street, after Yale was shot to death from a pursuing automobile on July 02, 1928. Yale’s car crashed into a house and he was thrown out of the car: 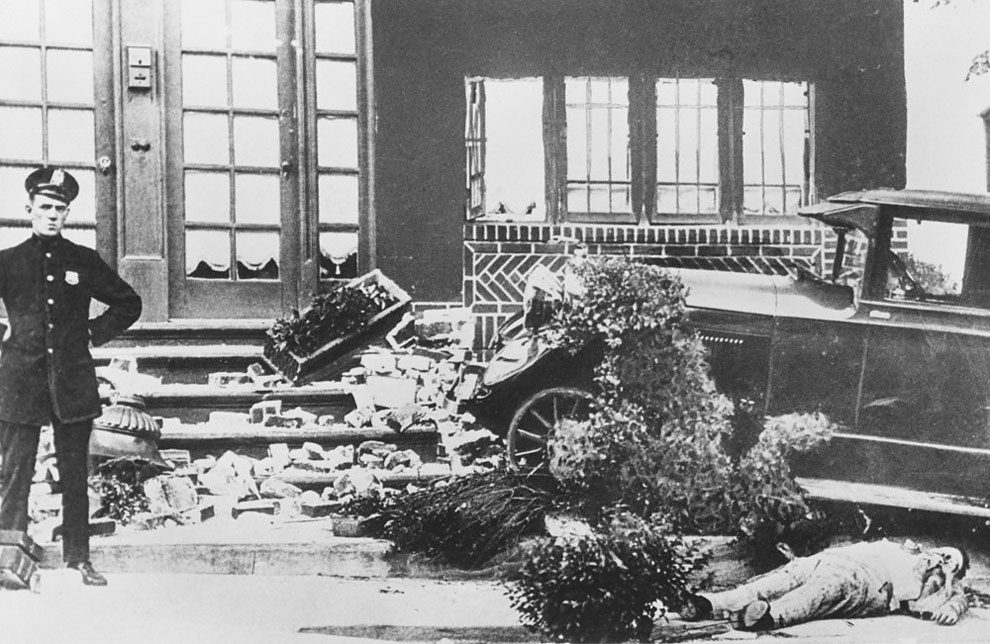 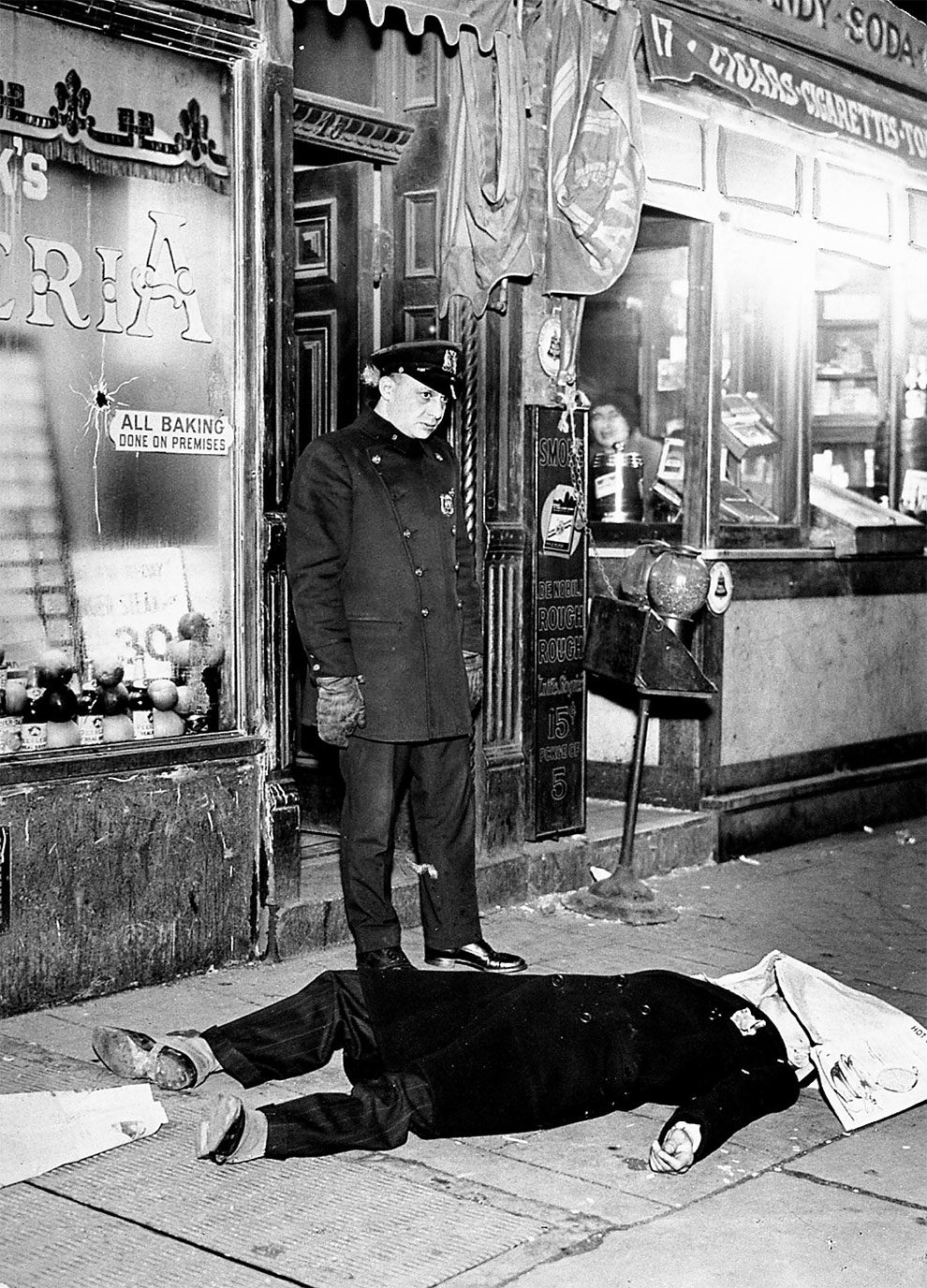 George (Bugsy) Moran, Chicago gangster, on trial at Waukegan, Illinois on December 11, 1930. Charged with vagrancy, he is being named one of Chicago’s “Public Enemies”. Vehemently denied in court the charges, and declared himself a business man. His wife was with him in court and was twice in tears during the arguments: 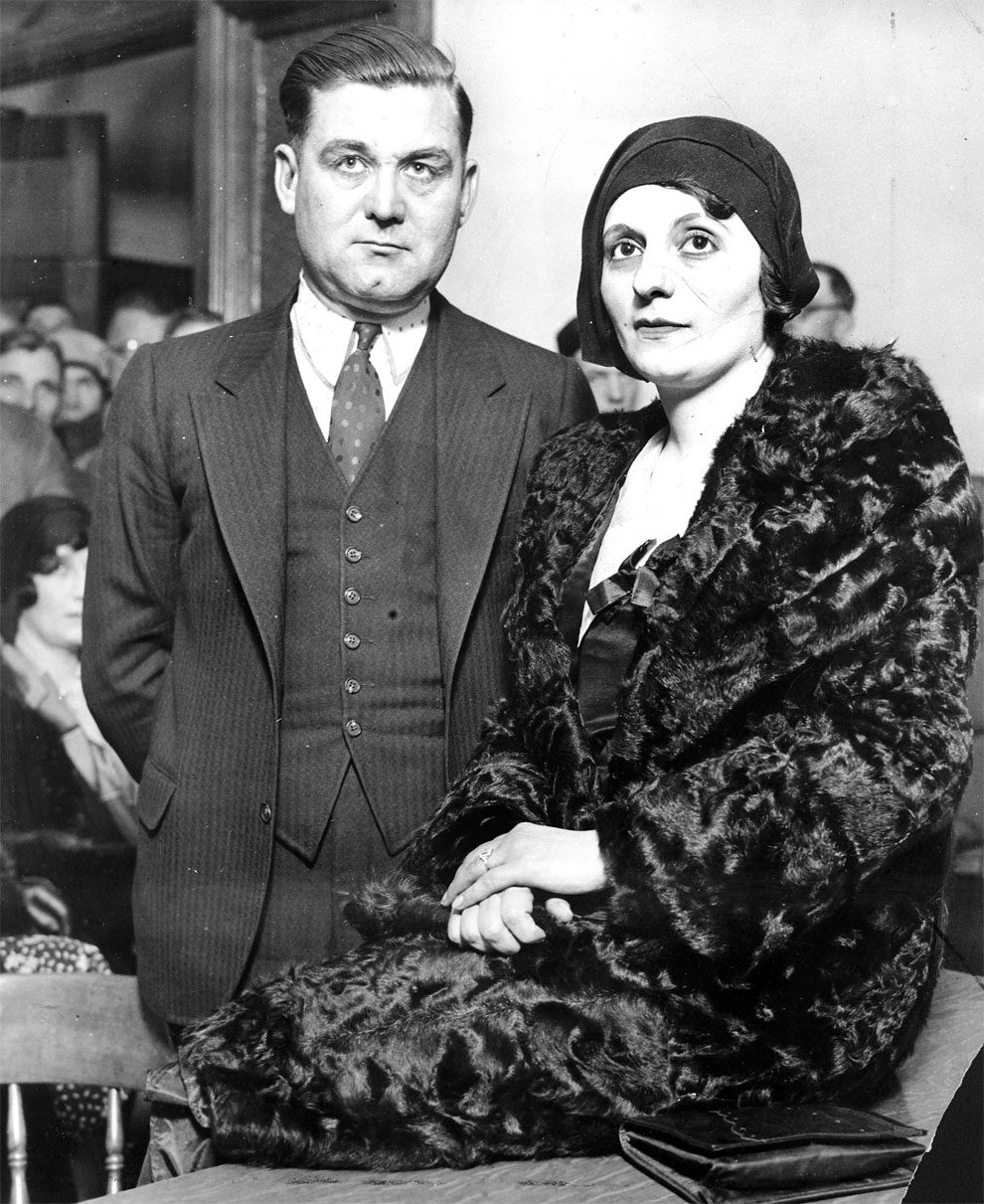 War veterans, members of a civilian organization for the suppression of crime, leading gangsters to the police station following their arrest in the United States in 1932: 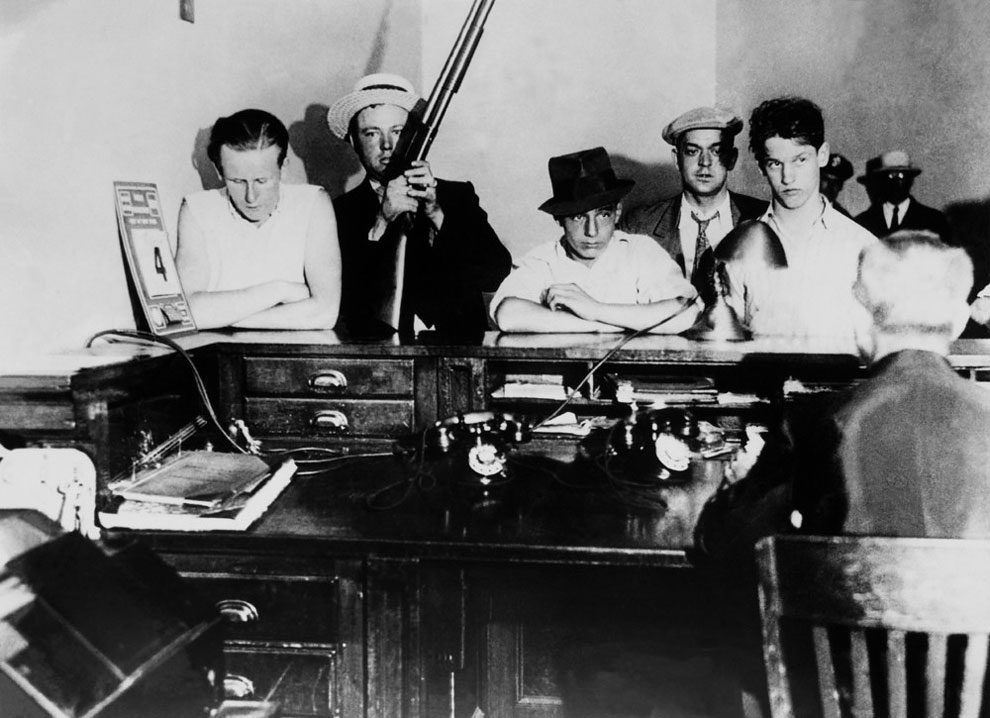 A car riddled with bullet holes belonging to New-York gangsters, in 1933. After a police chase, the criminals were arrested by policemen who had fired a hundred shots at their car: 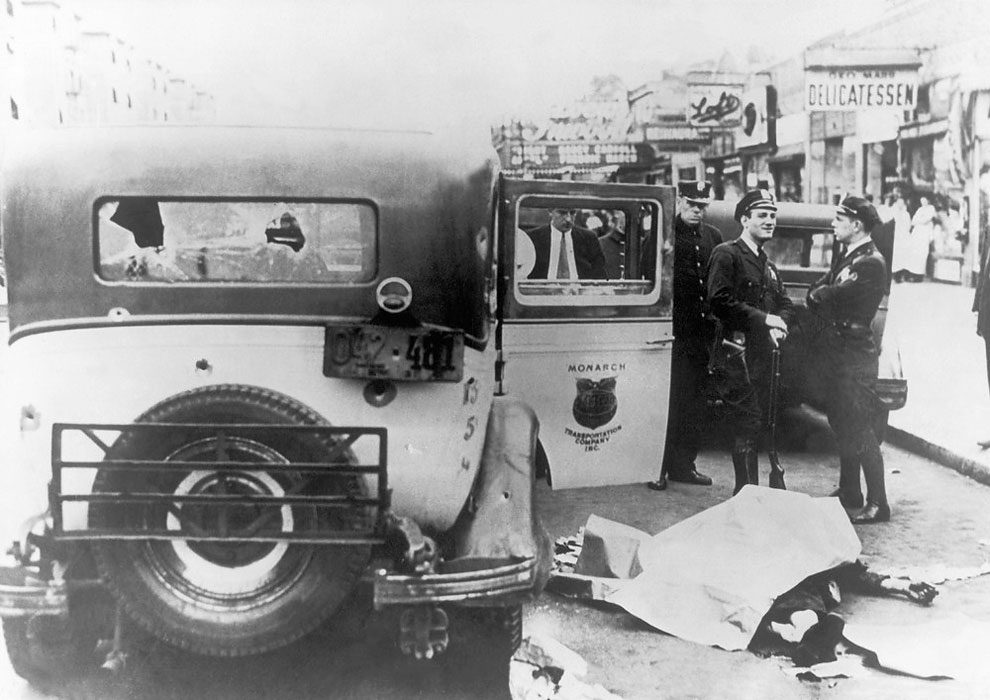 Italian-American mafioso Frank Frigenti sitting at a table in a restaurant. Italy, 1950s: 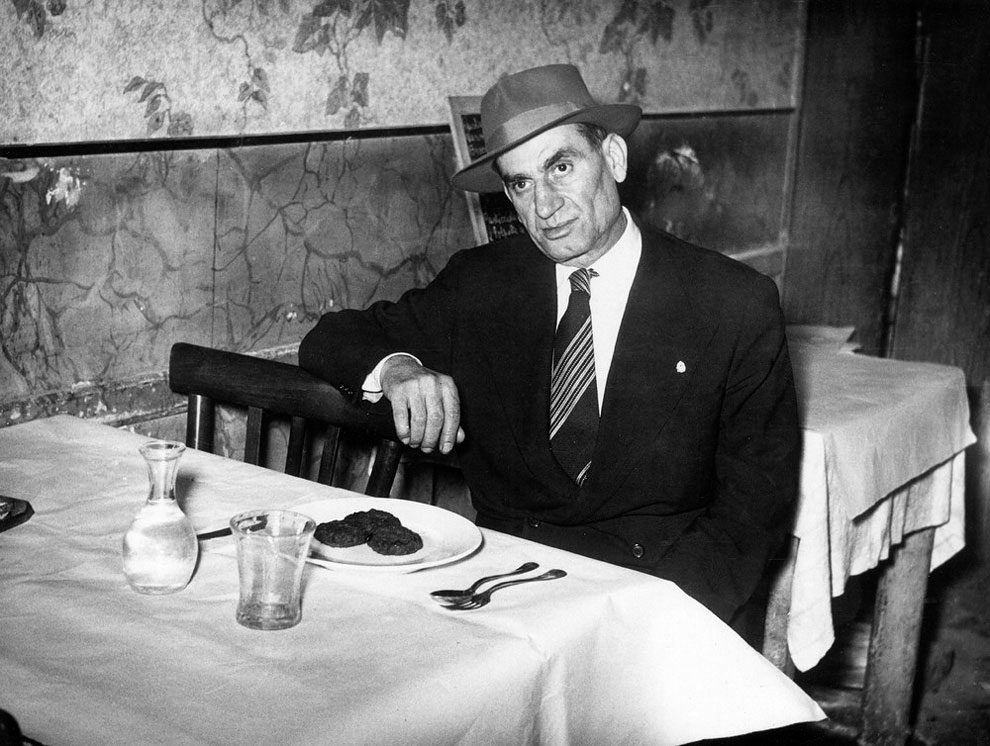 A man raises a stake to beat a drunken man sitting on a pier with a beer bottle, 1940s: 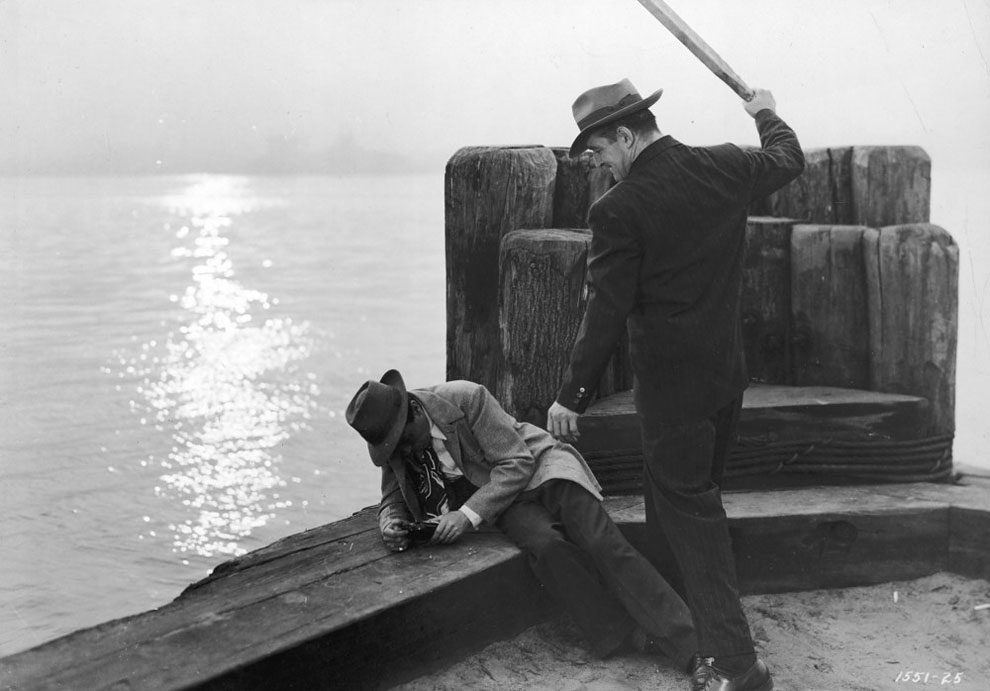 Stunning Winning Photos Of Wellcome Photography Prize 2021
12 Zombie Style Family Portraits Render Any Family Photos You Have So Alive And Well Boring
Mother And Daughter: Debbie Reynolds And Carrie Fisher Together In Pictures
These Young People from Lagos, Nigeria Took Smartphone Photography to The Next Level
Photoshop Master Showed Why We Should Not Believe Photos In Social Networks
Femme Fatales: Mug Shots Of Female Criminals From Early 20th Century Australia
Spectacular Winning Photographs from The World in Macro Contest 2020
2012 Victoria’s Secret Fashion Show
New York Secret Rooftop World
2019 Audubon Photography Awards Winners
Quirky And Extraordinary Moments Of Everyday Life In Japan By Shin Noguchi
Balloonists Take To The Skies To Launch The Bristol
80's Young Fashion: Color Photos Of US Teen Girls During The 1980s
15 Authentic Shots Of Motherhood In All Its Beauty
Rihanna for Harper’s Bazaar US, August 2012
Portraits From Brazil Crackland
"Visit Hungary": Artificial Lakes of Délegyháza from Above by Gabor Nagy
Sochi, The Russian Riviera Of 1988 Through The Lens Of Photographer Carl De Keyzer
Underwater Graveyard Full Of WWII Planes Is Otherworldly
Before Smartphones And Computers Kids Had Real Fun
"New Horizon": The Post-Soviet Landscape Through The Lens Of Rafal Milach
"Light And Its Form of Absence": Architecture Photography by Andres Gallardo Albajar
Photographer Paul Huf Captured Amazing Fashion Photoshoot In The Soviet Union In 1965
Intimate Vintage Photos Capture Romantic Couples In The 1950s
black, brutal, lives, photos, striking, white