Wildlife Photographer Of The Year 2018 Competition Winners Are Announced

The winners of the Wildlife Photographer of the Year competition are revealed at a ceremony at the Natural History Museum, London, which runs the international competition.

Dutch photographer Marsel van Oosten has won the prestigious Wildlife Photographer of the Year 2018 title for his extraordinary image, The Golden Couple, which frames a pair of golden snub-nosed monkeys in the temperate forest of China’s Qinling Mountains, the only habitat for these endangered primates. The winning portrait captures the beauty and fragility of life on earth, and a glimpse of some of the extraordinary, yet relatable beings we share our planet with. 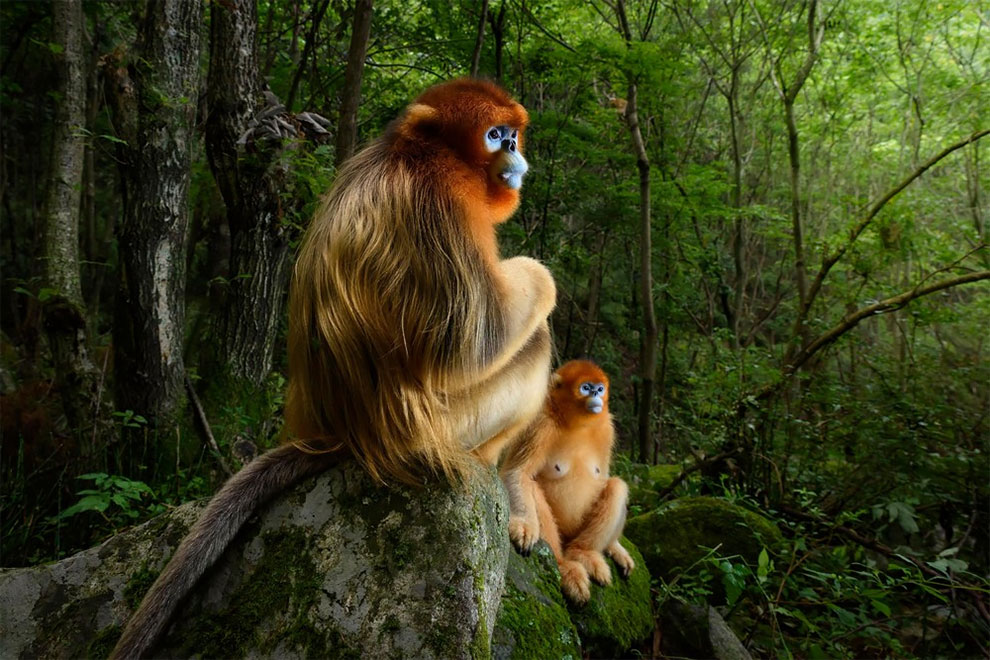 The golden couple by Marsel van Oosten, The Netherlands — grand title winner, Animal portraits. A male Qinling golden snub-nosed monkey rests on a stone, joined by a female from his group. Both are watching an altercation down the valley between the lead males of two other groups in the 50-strong troop. It’s spring in the temperate forest of China’s Qinling mountains, the only place where these endangered monkeys live. To show both a male’s beautiful pelage and striking blue face, Marsel had to shoot at an angle from the back. It took many days observing the group to achieve his goal. (Photo by Marsel van Oosten/2018 Wildlife Photographer of the Year)

More: Wildlife Photographer of the Year 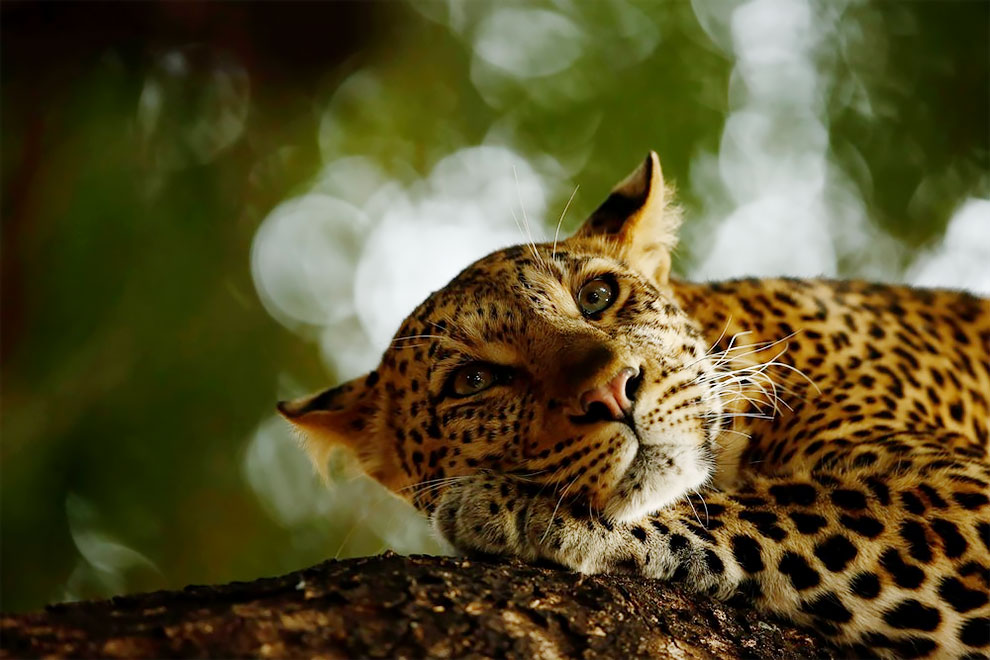 Lounging leopard by Skye Meaker, South Africa — grand title winner, 15-17 years. Old Mathoja was dozing when they finally found her, lying along a low branch of a nyala tree in Botswana’s Mashatu Game Reserve. Mathoja means ‘the one that walks with a limp’ injured when she was a cub, but otherwise she is a healthy, calm eight-year-old. The morning light was poor, leaves kept blowing across her face, and her eyes were only ever open briefly, making it hard for Skye to compose the shot he was after. Finally, a shaft of light gave a glint to her eyes, helping him to create his memorable portrait. (Photo by Skye Meaker/2018 Wildlife Photographer of the Year) 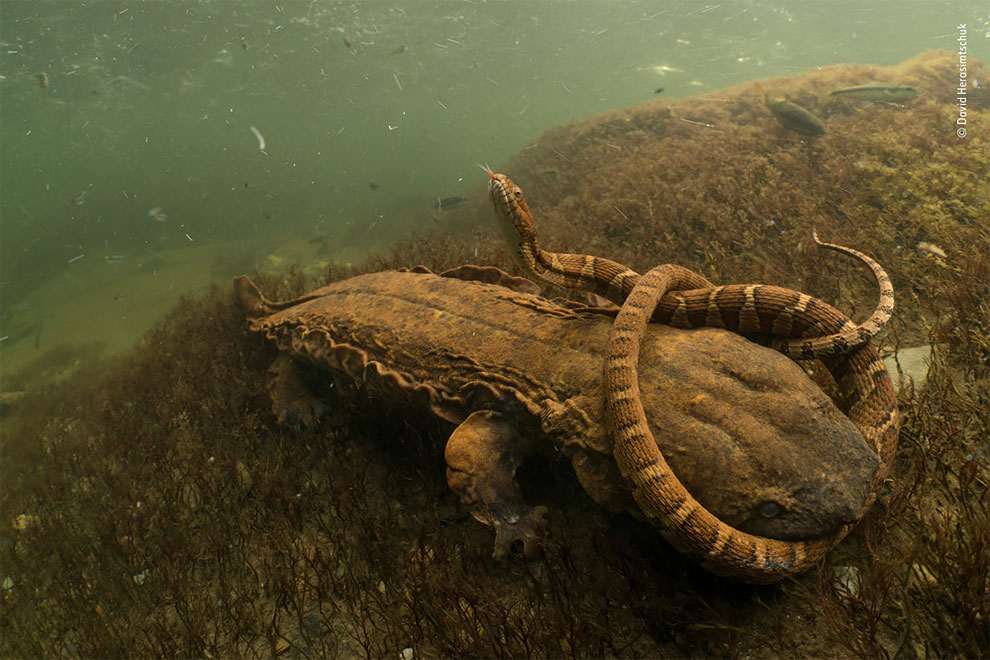 Hellbent by David Herasimtschuk, US — winner, Behaviour: amphibians and reptiles. It was not looking good for the northern water snake, clamped tightly in the jaws of a hungry hellbender, but it was a remarkable find for David. Drifting downstream in Tennessee’s Tellico River, in search of freshwater life (as he had done for countless hours over the past seven years), he was thrilled to spot the mighty amphibian with its struggling prey. The hellbender has declined significantly because of habitat loss and degradation and its presence indicates a healthy freshwater ecosystem. (Photo by David Herasimtschuk/2018 Wildlife Photographer of the Year) 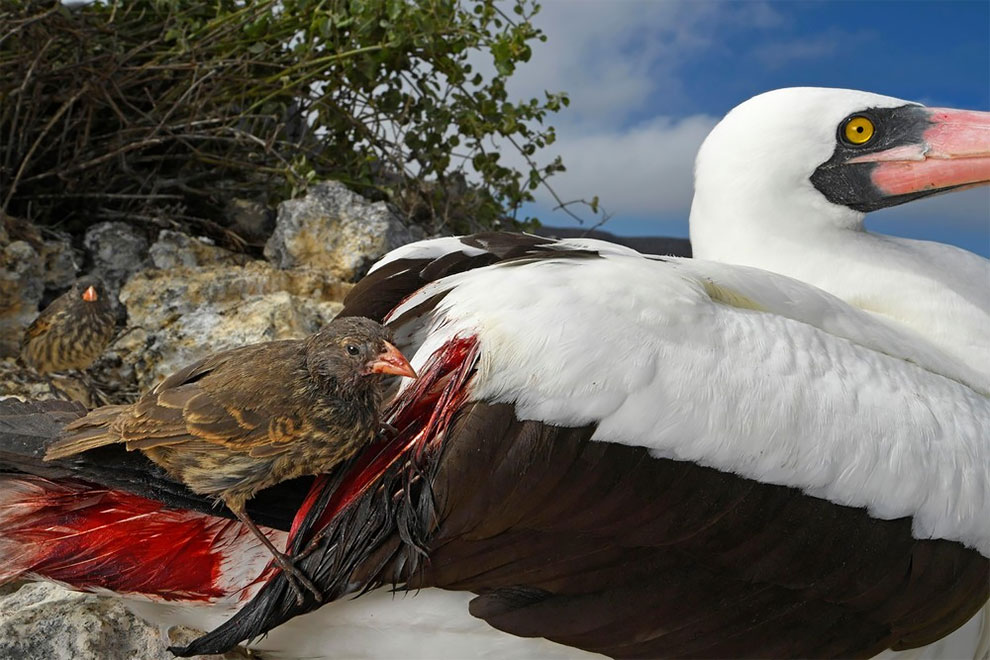 Bloodthirsty by Thomas P. Peschak, Germany/South Africa — winner, Behaviour: birds. When rations run short on Wolf Island, in the remote northern Galápagos, the sharp-beaked ground finches become vampires. Their sitting targets are Nazca boobies and other large birds. The finches rely on a scant diet of seeds and insects, which regularly dries up, so they drink blood to survive. ‘I’ve seen more than half a dozen finches drinking from a single Nazca booby,’ says Tom. Rather than leave their nests the boobies tolerate the vampires, and the blood loss doesn’t seem to cause permanent harm. (Photo by Thomas P. Peschak/2018 Wildlife Photographer of the Year) 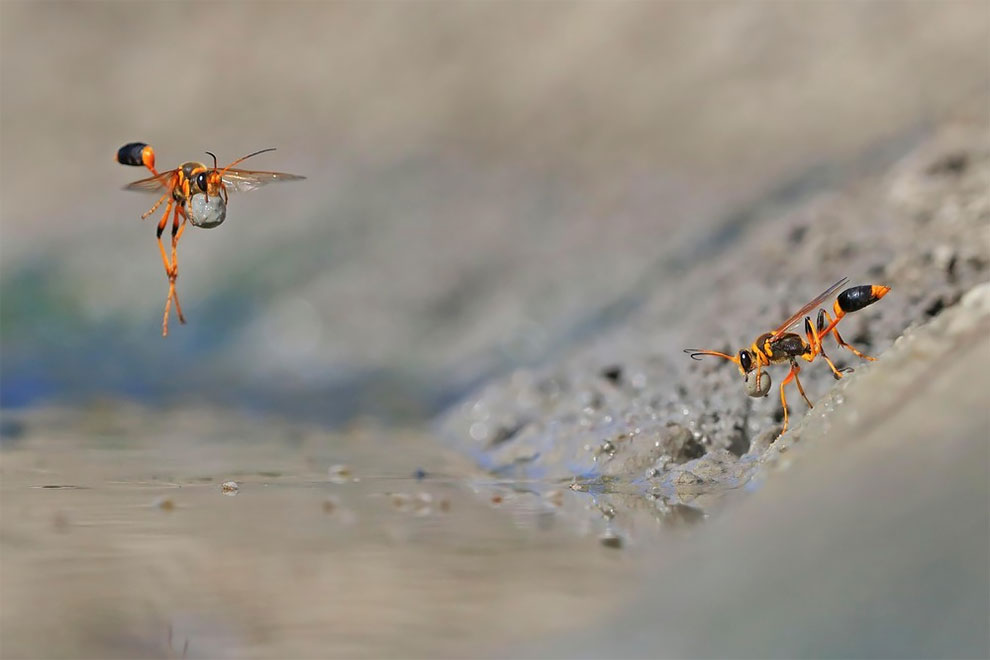 Mud-rolling mud-dauber by Georgina Steytler, Australia — winner, Behaviour: invertebrates. It was a hot summer day, and the waterhole at Walyormouring Nature Reserve, Western Australia, was buzzing. Georgina had got there early to photograph birds, but her attention was stolen by the industrious mud-dauber wasps. They were females, digging in the soft mud at the water’s edge, then rolling the mud into balls to create egg chambers for their nearby nests. A female builds her external nest completely out of mud, cylindrical chamber by chamber, which cement together as the mud hardens. (Photo by Georgina Steytler/2018 Wildlife Photographer of the Year) 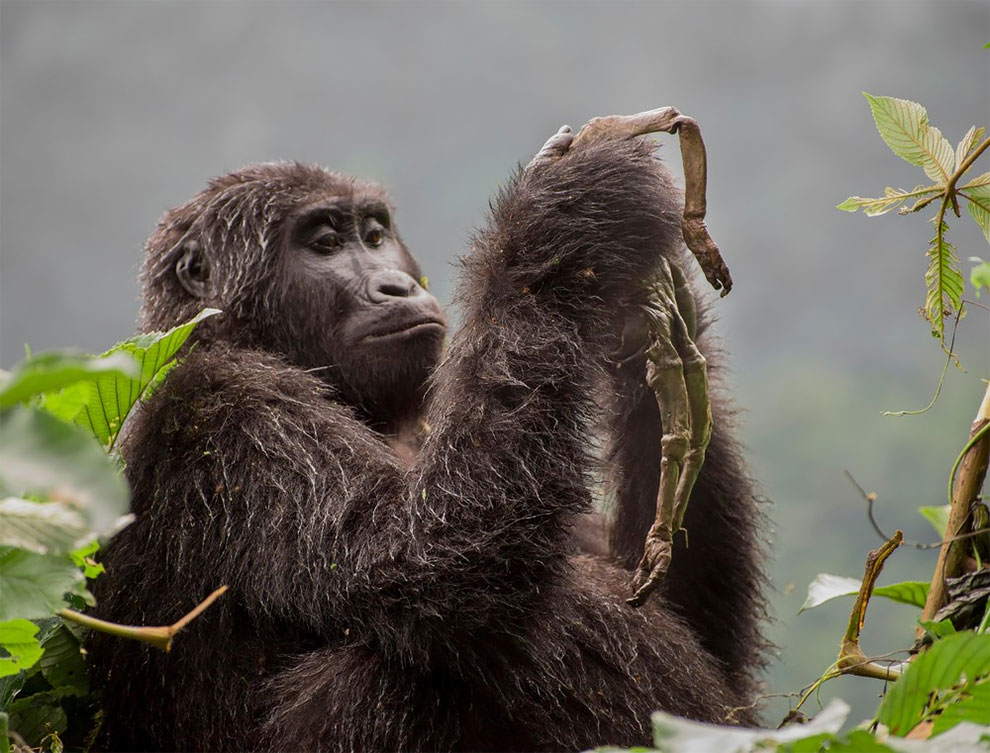 Kuhirwa mourns her baby by Ricardo Núñez Montero, Spain — winner, Behaviour: mammals. Kuhirwa, a young female of the Nkuringo mountain gorilla family in Uganda’s Bwindi Impenetrable Forest, would not give up on her dead baby. What Ricardo first thought to be a bundle of roots turned out to be the tiny corpse. Guides told him that she had given birth during bad weather and the baby probably died of cold. At first Kuhirwa had cuddled and groomed the body, carrying it piggyback. Weeks later, she started to eat what was left of the corpse, behaviour the guide had only seen once before. (Photo by Ricardo Núñez Montero/2018 Wildlife Photographer of the Year) 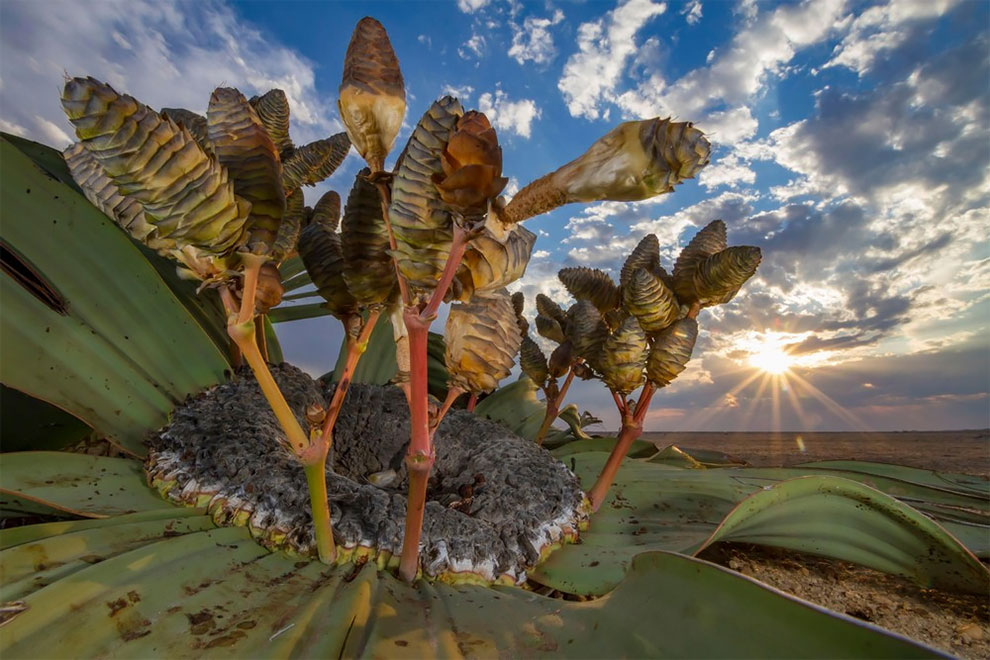 Desert relic by Jen Guyton by Germany/US — winner, Plants and Fungi. The cones of a female welwitschia reach for the skies over the Namib Desert. These desert survivors have an extraordinary biology. Male and female plants both produce distinctive cones. Each plant comprises just two leaves, a stem base and a tap root. The woody stem stops growing at the apex but widens with age, forming a concave disc, but the two original seedling leaves continue to grow, gradually splitting and fraying. The largest specimens span more than 8 metres (26 feet) and may be 1,000 years old or more. (Photo by Jen Guyton/2018 Wildlife Photographer of the Year) 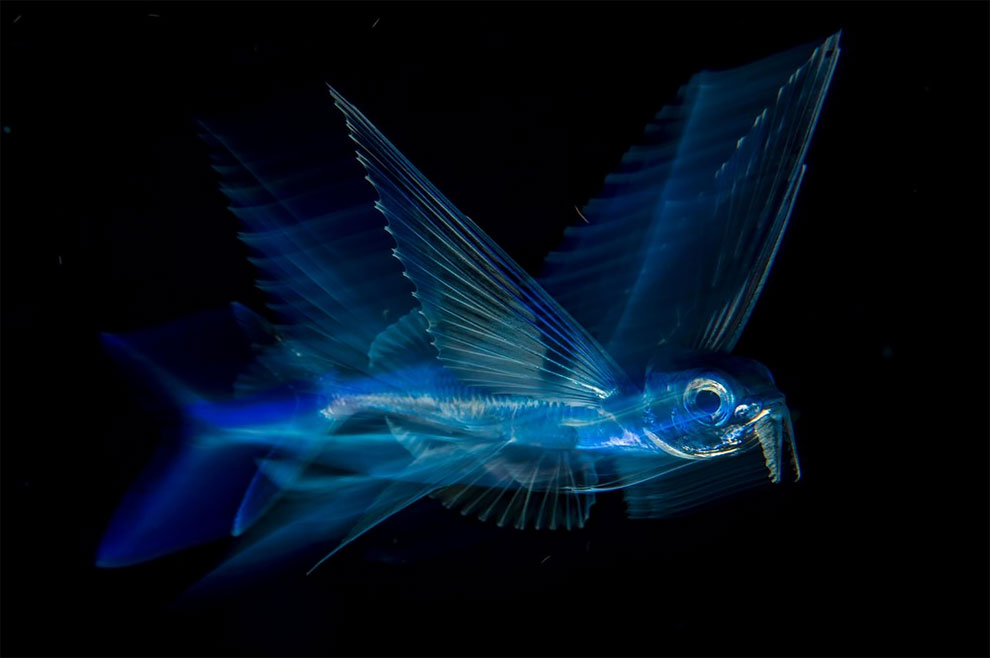 Night flight by Michael Patrick O’Neill, US — winner, Underwater. On a night dive over deep water in the Atlantic, far off Florida’s Palm Beach, Michael achieved a long-held goal, to photograph a flying fish so as to convey the speed, motion and beauty of this ‘fantastic creature’. By day, these fish are almost impossible to approach. Living at the surface, they are potential prey for a great many animals, including tuna, marlin and mackerel. At night, they are more approachable, moving slowly as they feed on planktonic animals close to the surface. (Photo by Michael Patrick O’Neill/2018 Wildlife Photographer of the Year) 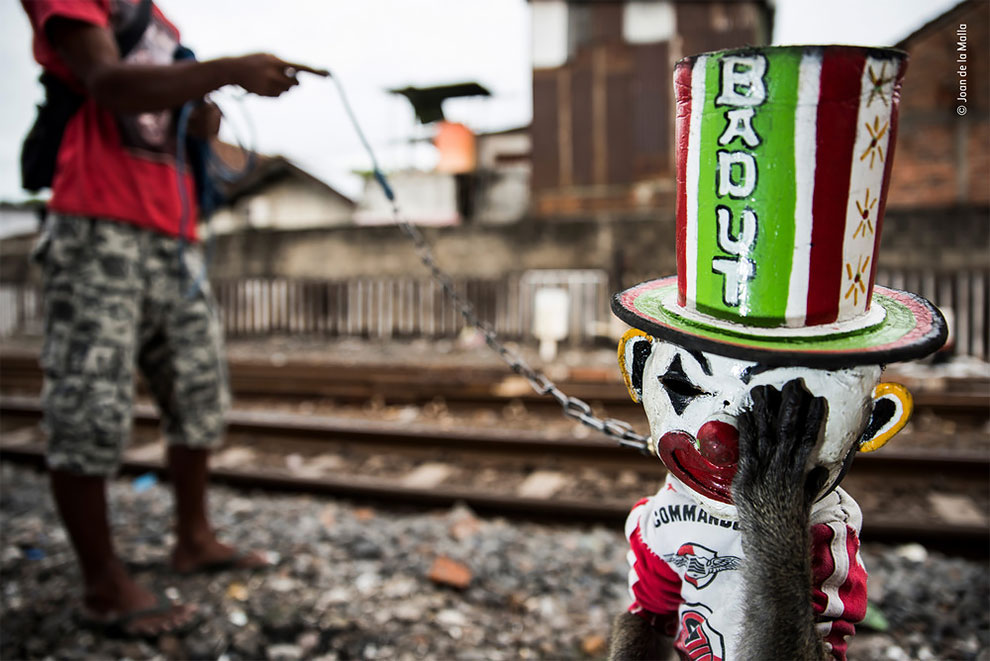 The sad clown by Joan de la Malla, Spain — winner, Wildlife photojournalism. Timbul, a young long-tailed macaque, puts his hand to his face to try to relieve the discomfort of the mask he has to wear. His owner is training him to stand upright so that he can add more stunts to his repertoire (Badut on his hat means clown). Macaque street shows are banned in several cities, but still take place in Indonesia. Joan spent a long time gaining the trust of the monkey owners in Surabaya, Java. ‘They are not bad people,’ he says, ‘They just need other opportunities to make a living’. (Photo by Joan de la Malla/2018 Wildlife Photographer of the Year) 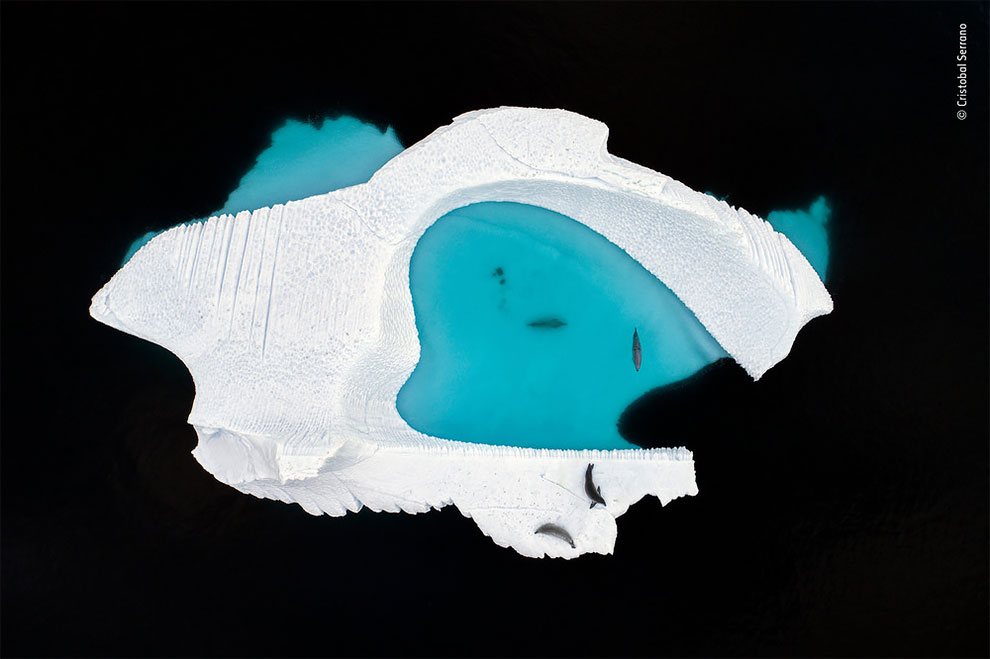 The ice pool by Cristobal Serrano, Spain — winner, Creative Visions. On a cloudy day, Cristobal scoured the Errera Channel on the west coast of the Antarctic Peninsula. The constant current through this relatively calm stretch of water carries icebergs of all shapes and sizes. Selecting one that looked promising — about 40m (130 feet) long and 14m tall) — he flew his low-noise drone high over the top to reveal an ice carving. Warmer air had melted part of the surface to create a clear, heart-shaped pool, within the curves of ice, set off by the streamlined forms of a few crabeater seals. (Photo by Cristobal Serrano/2018 Wildlife Photographer of the Year) 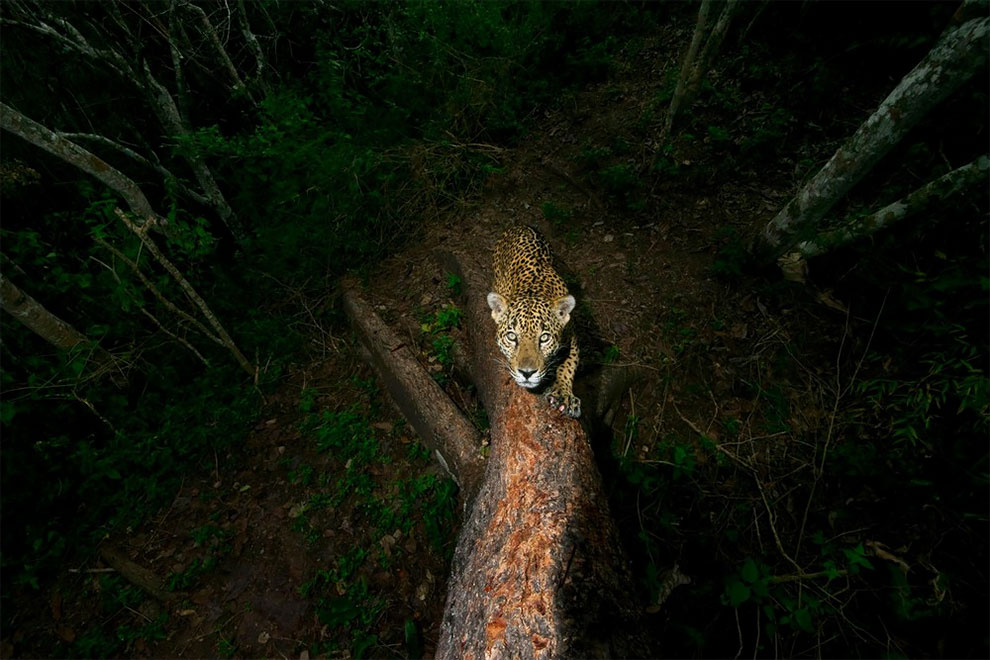 Signature tree by Alejandro Prieto, Mexico — from winning photo story Gunning for the Jaguar. A male jaguar sharpens his claws and scratches his signature into a tree on the edge of his mountain territory in the Sierra de Vallejo in Mexico’s western state of Nayarit. The boundary-post has been chosen with care – the tree has soft bark, allowing for deep scratch marks that are a clear warning, backed by pungent scent, not to trespass. Alejandro set up his custom-built camera trap six metres away and after eight months the jaguar eventually returned to refresh his mark. (Photo by Alejandro Prieto/2018 Wildlife Photographer of the Year) 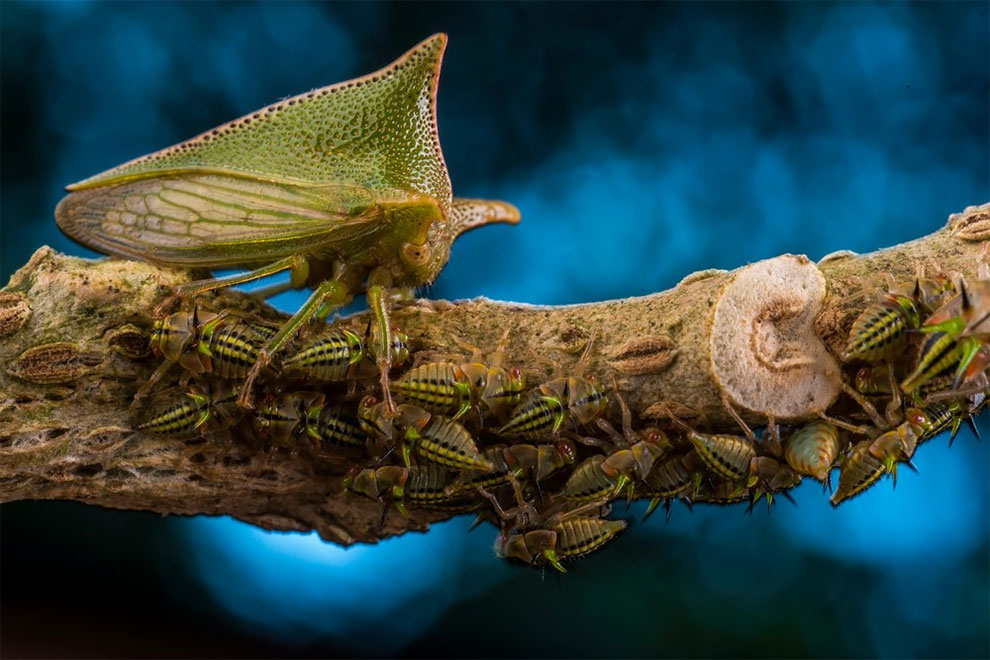 Mother defender by Javier Aznar González de Rueda, Spain — winner, wildlife photographer portfolio award (from a portfolio of six images). A large Alchisme treehopper guards her family as the nymphs feed on the stem of a nightshade plant in El Jardín de los Sueños reserve in Ecuador. Unlike many treehoppers, which enlist the help of other insects (mostly ants), this species is guarded by the mother alone. She lays her eggs on the underside of a nightshade leaf, covers them with a thin secretion and then shields the clutch with her tiny frame. (Photo by Javier Aznar González de Rueda/2018 Wildlife Photographer of the Year)

American Eagle Underwear Had An Increase In Sales. These Unretouched Pics Are Maybe A Clue Why
Vintage Photos Of People Wearing Masks During The 1918 Influenza Pandemic, One Of The Deadliest Natural Disasters In Human History
The Beauty Of The Light And Shadow Photography
Stunning Color Photography in the 1950s by Saul Leiter
Funny Family Photo By Bruce Osborn
"Into The Mirror" By Luca Meneghel
Funny Zoo Advertisements
Vintage Photos Of Lumberjacks Who Felled Big Trees Using Only Hand Tools In The Early 20th Century
Beautiful Redhead Portraits By Vitaliy Zubchevskiy
Scottish Photographer Alan McFadyen Digs Pool In Forest For ‘Mirrored’ Wildlife Photos
That’s How Bored Bookstore Employees Entertain Themselves
Vibrant Street Photography By Jimmy Chan
"Rebels Without A Pause" - Intimate Portraits Of Britain's Aging Rebels And Mavericks
"Hymn"
Fascinating Fashion Photography By Yuliia Stepanok
These Old Photos of Kit Harington & Emilia Clarke Kissing Has Driven Every “Game of Thrones” Fan Crazy
The World’s Greatest Gallery of Bread Butts
Marvelous Beauty And Lifestyle Portrait Photography By Evgeny Freyer
Satellite Image Shows Stricken Costa Concordia From Space
Disney Just Released Striking "Lion King" Photos Showing The Characters And The Stars Behind Them
Spider Wins in New Lockdown Wildlife Photo Competition 2020
Rare Vintage Photos Of Dwellers Of The Russian North Over A Century Ago
1920s Fashion Through The Lens Of Police Mugshots
Construction to Sinking to Legend: 100 Years of the Titanic
competition, photography, wildlife, winners