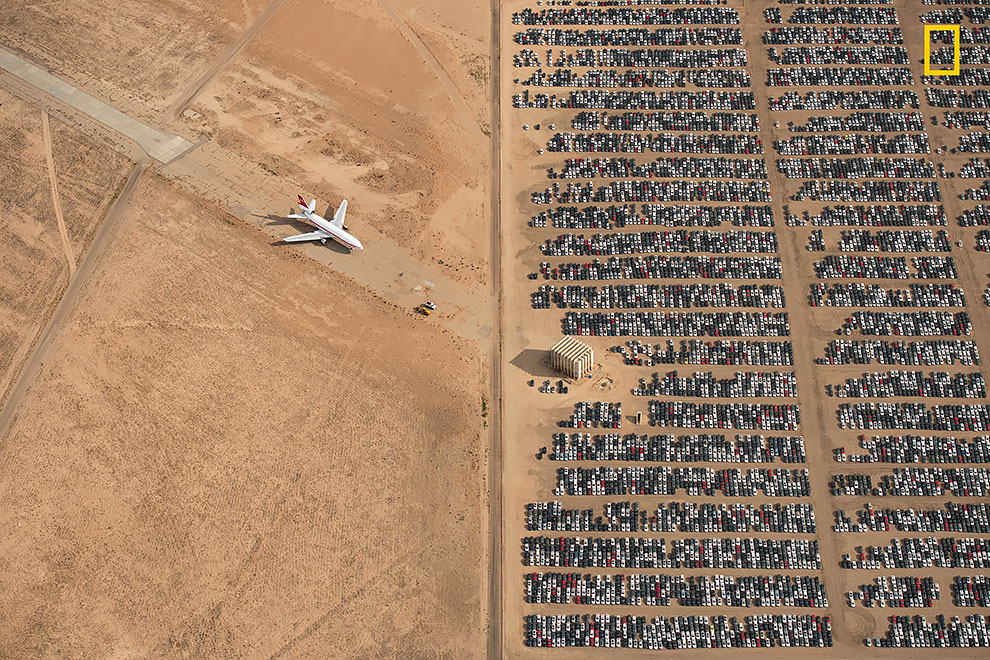 “Thousands of Volkswagen and Audi cars sit idle in the middle of California’s Mojave Desert. Models manufactured from 2009 to 2015 were designed to cheat emissions tests mandated by the U.S. Environmental Protection Agency. Following the scandal, Volkswagenrecalled millions of cars. By capturing scenes like this one, I hope we will all become more conscious of and more caring toward our beautiful planet.” (Photograph and caption by Jassen Todorov / 2018 National Geographic Photo Contest) 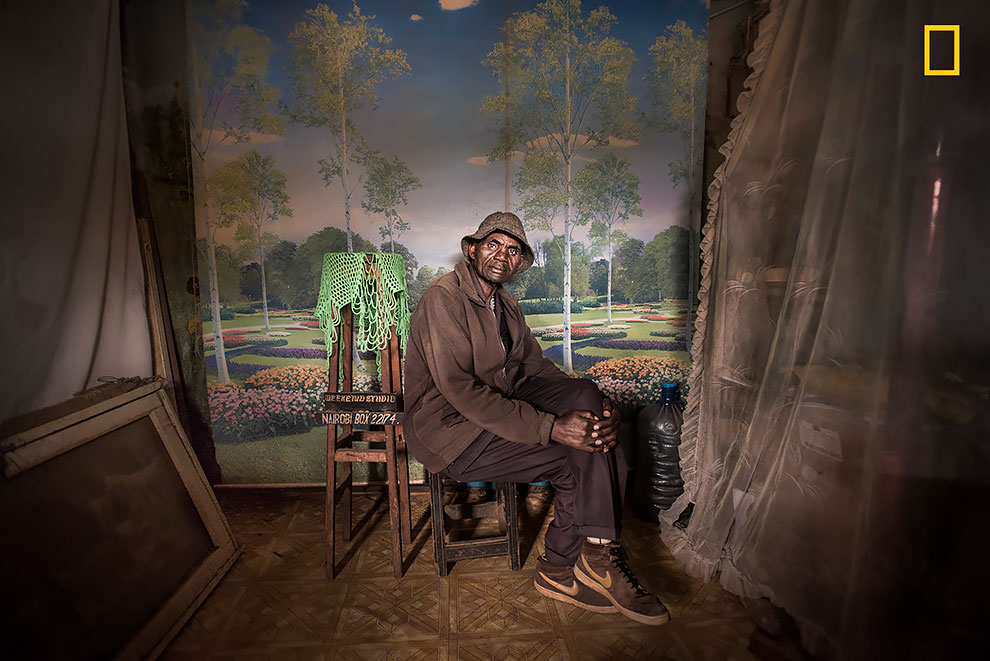 “I was looking to do a series of portraits showing people wearing their Sunday best when I made this photo of David Muyochokera. It was taken on his last Sunday working as a photographer at Weekend Studio, in Kibera—a large shantytown in Nairobi, Kenya. Myfriend Peter, a local resident, had pointed me to the photo studio just as I was about to leave the area. It was a stunning space, with whimsical backdrops and natural light coming through the doorway. David had worked there for 37 years, but Weekend Studio was about to close permanently. Phone cameras were so common now, he said, and fewer people wanted studio portraits. David planned to retire andreturn home to the countryside. I was troubled by the studio’s imminent closure, so I eventually took over the rent. A portrait of David now hangs at Weekend Studio in his memory.” (Photograph and caption by Mia Collis / 2018 National Geographic Photo Contest) 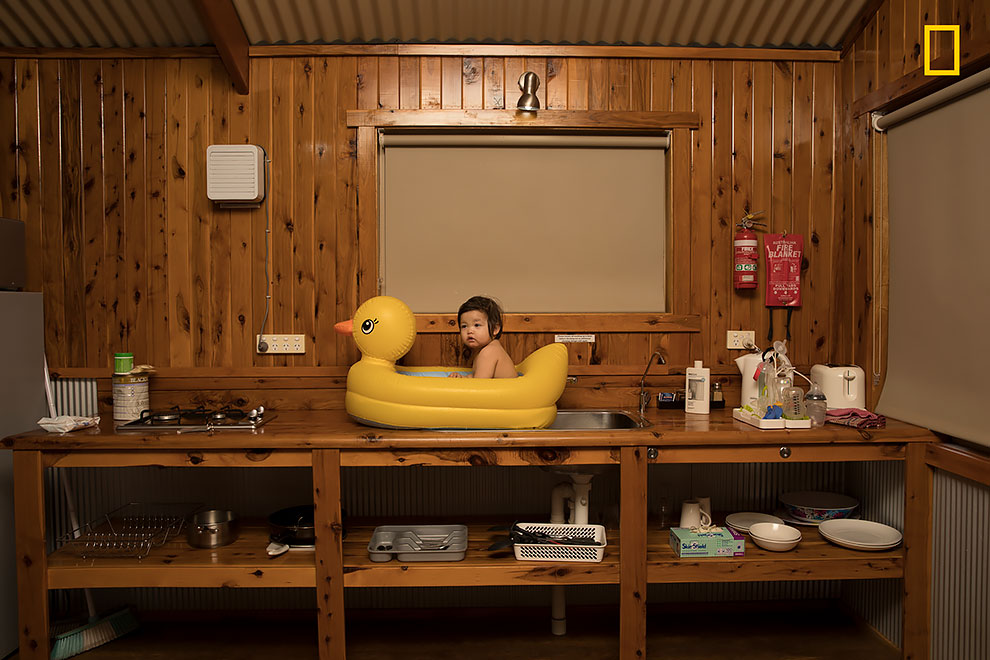 “On a family holiday driving from Sydney to Uluru, we stopped at a roadside motel in the small rural township of Nyngan, on the edge of Australia’s outback. The area is in the wheat belt, and it was unusually hot for that time of year—over a hundred degrees Fahrenheit and very dusty. Our daughter, Genie, is seen here enjoying a refreshing bath in a rubber ducky perched on the sink.” (Photograph and caption by Todd Kennedy / 2018 National Geographic Photo Contest) 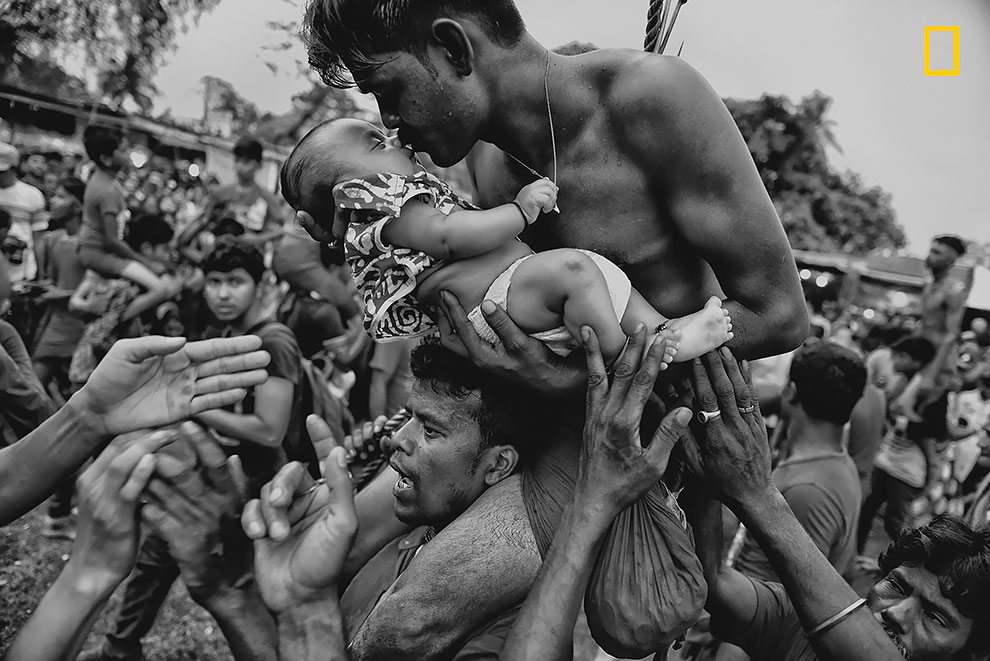 “A Hindu devotee kisses his newborn baby during the Charak Puja festival in West Bengal, India. Traditional practice calls for the devotee to be pierced with a hook and sometimes swung from a rope. This painful sacrifice is enacted to save their children from anxiety. While covering the festival, I was able to view the religious practice from the perspective of Hindu devotees. I tried to capture the moment of love and bonding between a father and his child—and show a father’s concern for his little son.” (Photograph and caption by Avishek Das / 2018 National Geographic Photo Contest) 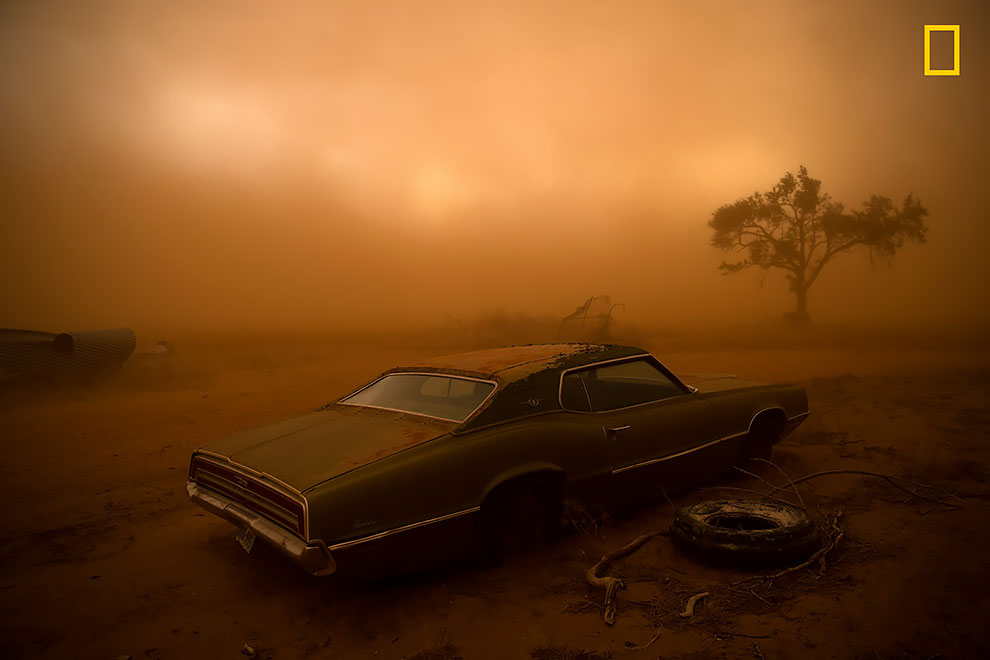 “A rusting Ford Thunderbird is blanketed by red dust from a supercell thunderstorm in Ralls, Texas. The dry, plowed fields of the Texas Panhandle made easy prey for the storm, which had winds over 90 miles an hour ripping up the topsoil and depositing it farther south. I was forecasting and positioning a team of videographers and photographers on a storm chase in Tornado Alley—this was our last day of a very successful chase, having witnessed 16tornadoes over 10 days. The target area for a storm initiation was just south of Amarillo, Texas. Once the storm became a supercell, it moved southbound with outflow winds that were easily strong enough to tear up the topsoil and send it into the air.” (Photograph and caption by Nicholas Moir / 2018 National Geographic Photo Contest) 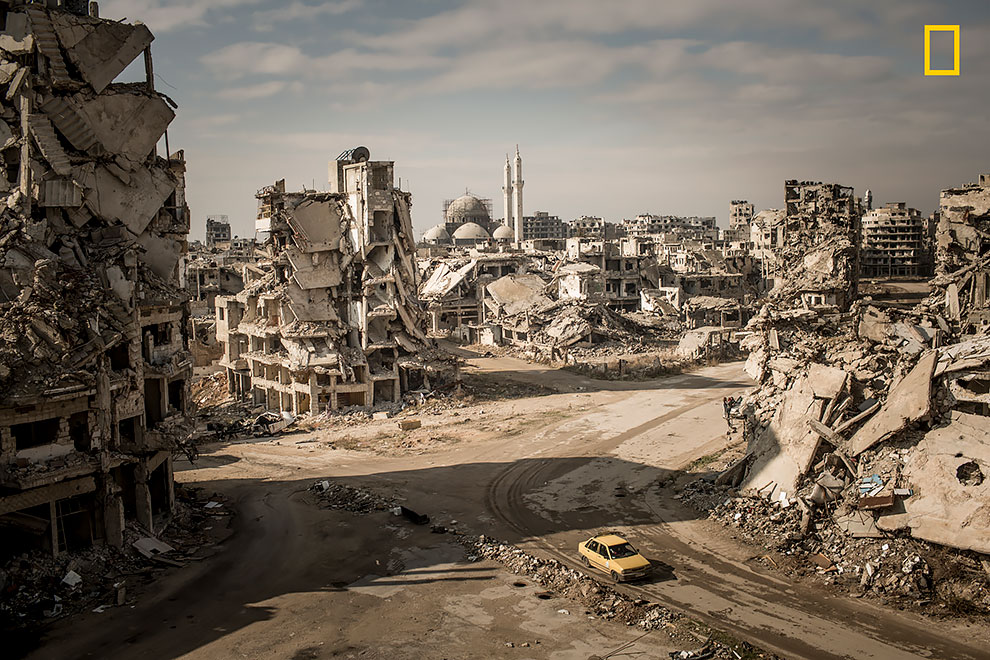 “While on assignment for Der Spiegel, we made a road trip through Syria to document the current situation in major cities. When I firstentered the Khalidiya district in Homs, I was shocked. I hadn’t seen such large-scale destruction before, and I had been to many destroyed cities. The area around the Khalidiya district was extremely quiet. No city sounds, cars—nothing. Only the chirping of swallows and the wind.We walked down the streets of Khalidiya, but the destruction was so large scale that you couldn’t have the big picture from the point of view on the street—you could only manage it with a view from above. To make this image, I asked a Syrian soldier in charge of the area if I could climb onto a ruin. The soldier agreed, allowing me to climb at my own risk. I climbed up the ruins of a former house—which was full of improvised explosive devices—and took the picture. I was very lucky to take the picture when I was on the rooftop. Without any sign of life, it would havebeen a dead picture. I can recall the memory vividly.” (Photograph and caption by Christian Werner / 2018 National Geographic Photo Contest) 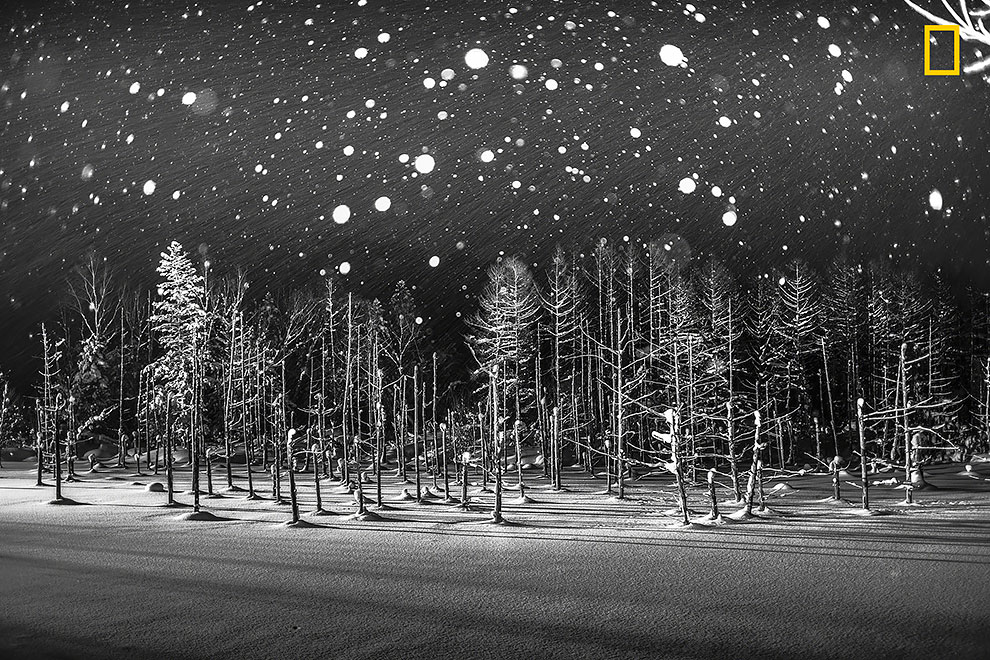 “Japan’s Blue Pond in Biei-cho, Hokkaido, has become very famous for attracting tourists from around the world. It is surrounded by beautiful mountains and trees. This pond, frozen during winter, was artificially made to prevent river contamination from the nearby active volcano, Mount Tokachi. The accumulated pond water contains high levels of minerals, such as those containing aluminum. The alluring view ofthe blue pond can take one’s breath away.To make this image, I made the exposure longer to capture the way the snow was falling. At the same time, I lit up the strobe for a moment to capture the snowflakes that are reflecting in the foreground. I took as many photos as I could and chose the one I thought had the best balance of the falling snow and the unfocused snowflakes. I wanted to express how time is created in just one moment and, by tying together these moments, history is made.” (Photograph and caption by Rucca Y Ito / 2018 National Geographic Photo Contest) 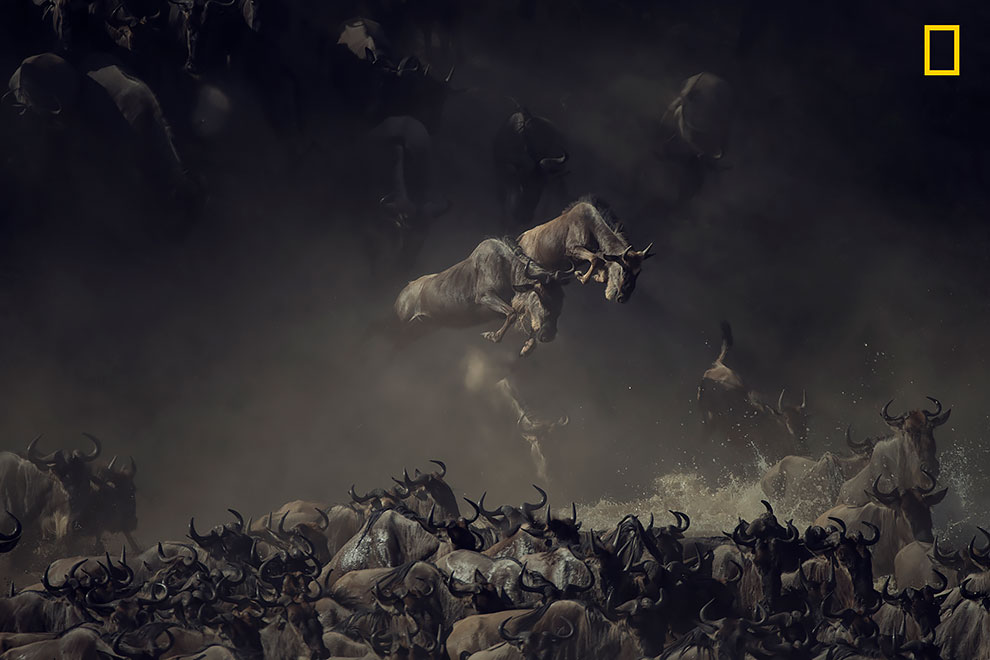 “It was early morning when I saw the wildebeests crossing Tanzania’s Mara River. The layering of dust, shade, and sun over the chaos of wildebeests kicking up water gives this picture a sense of mystique and allure. It’s almost like an old painting—I’m still compelled to search the detail of the image to absorb the unreal scene.” (Photograph and caption by Pim Volkers/ 2018 National Geographic Photo Contest) 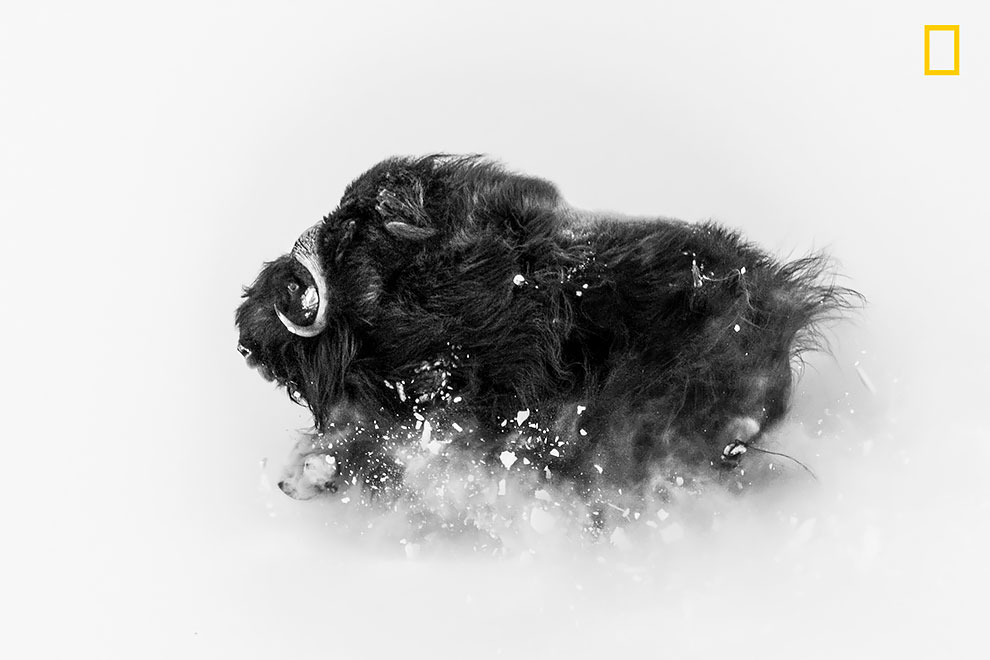 “A few miles from Qaanaaq (Thule), Greenland, I was on a hike in search of musk oxen when I came upon a group of them. This ox was running on a hillside in deep snow, which exploded underneath it—an amazing sight. The photo came together in a few seconds. I was lucky enough to be at the right spot to observe them frolicking, and then I had the incredible experience of watching them closely for about an hour. Ilove photographing musk oxen against the wintry landscape: They’re extremely tough Arctic survivors. This photo shows their beauty and their power—and the snow they deal with for about eight months of the year.” (Photograph and caption by Jonas Beyer/ 2018 National Geographic Photo Contest) 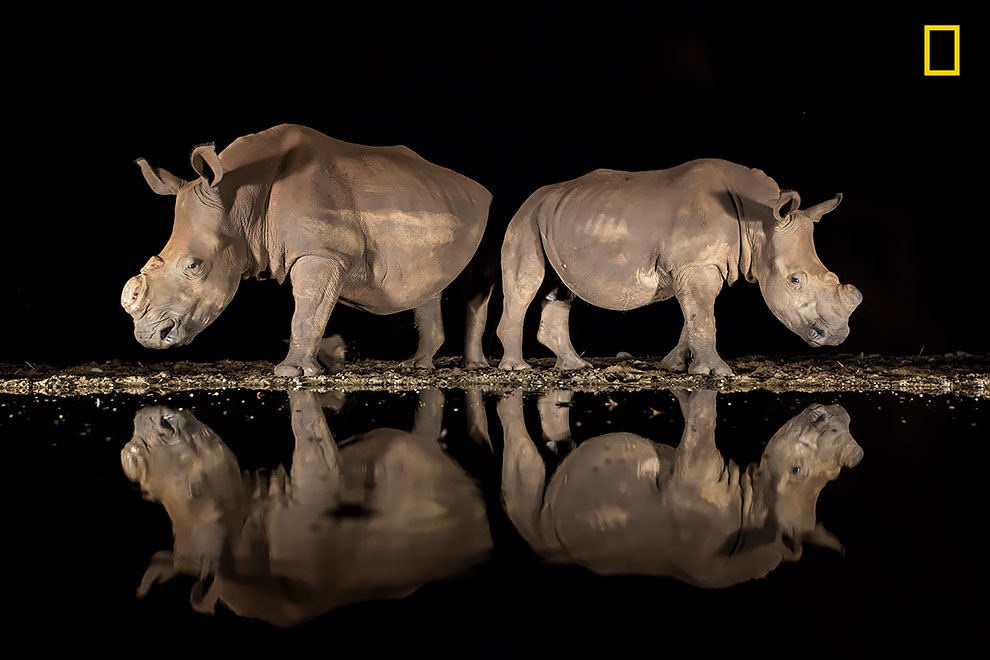 “As the late-night hours ticked by and my eyelids grew heavy, two southern white rhinoceroses appeared silently from the shadows to drink from a watering hole in South Africa’sZimanga Game Reserve. On alert, they stood back to back, observing their surroundings before lowering their heads. I felt privileged to share this moment with these endangered animals. While I was well prepared technically, with my camera set correctlyon a tripod, I underestimated the emotional impact the magnificent beasts would have on me. I had photographed them months earlier, and now both rhinos sported a new look: They had been dehorned to deter poachers. I had heard about this development but had not yet seen them. I was full of emotion—and horror—that poaching had such a devastating effect. It must have been a hard decision to dehorn their rhinos, and I am grateful for the reserve’s efforts.” (Photograph and caption by Alison Langevad/ 2018 National Geographic Photo Contest)

London is a Ghost Town
Brilliant Landscape Photography In Hawaii By Jason Wright
In Between Times: Lyrical And Nostalgic Atmosphere Of The Soviet Ural Region In Beautiful Black And White Photographs Of Ivan Galert
Photographer Captures Small Toys With Big Imagination
Artist Reimagines 5 Disney Fathers As Real Dads, And They’re Hella Handsome
Rosie Hardy Escapes Into Fantasy Worlds Through Her Self Portraits
Guardian Readers' Travel Photography Competition: July 2018 Winners
Artist “Completes” Clouds By Adding Silhouetted Shapes To Them, And The Results Are Beautiful
The Best Photos From The B&W Child Photography 2015 Photo Contest
Amazing Award-Winning Photos Of The Wildlife Photographer Of The Year 2017 Contest
The BirdLife Australia 2022 Calendar is Here!
We All Have a Happy Place, Where’s Yours? The Dark and Cinematic Photo Works of Corey Crawford
Spectacular Winning Images from The Wildlife Photographer of The Year 2020
Breathtaking Photos Of Isolated Tribes From All Around The World
Stunning Aerial Photographs Find The “Hidden City” Inside New York City
Wildlife Photographer Of The Year 2017 - Unforgettable Animal Behaviour
Set Of Photos Of Queen’s Face Taken For Use On Canadian Bank Notes Are On Sale For £3,000
Spot the Not: Body-Painting Artist Blends Nude Models in Various Landscapes
Mister Global Contestants Dress In Their National Costumes And Look Like Video Game Bosses
This Artist Uses Image Editing To Sculpt Icebergs, And No Icebergs Were Harmed In The Making Of This Art
In-Flight: Photography by Maria Netsounski
Horribly Happy Holidays: Stereotypical And Sarcastic Family Photography By Max Siedentopf
Spectacular Winning Images of The Drone Photo Awards 2021
5 Ridiculously Pretty Sisters Thank Their Parents for Their Expensive Weddings With a Photoshoot
contest, geographic, national, photography, winners