This Company Creates Unusual Coffins And Urns In The Shape Of Beer And Whiskey Bottles, Guitars And In A Geometric Style 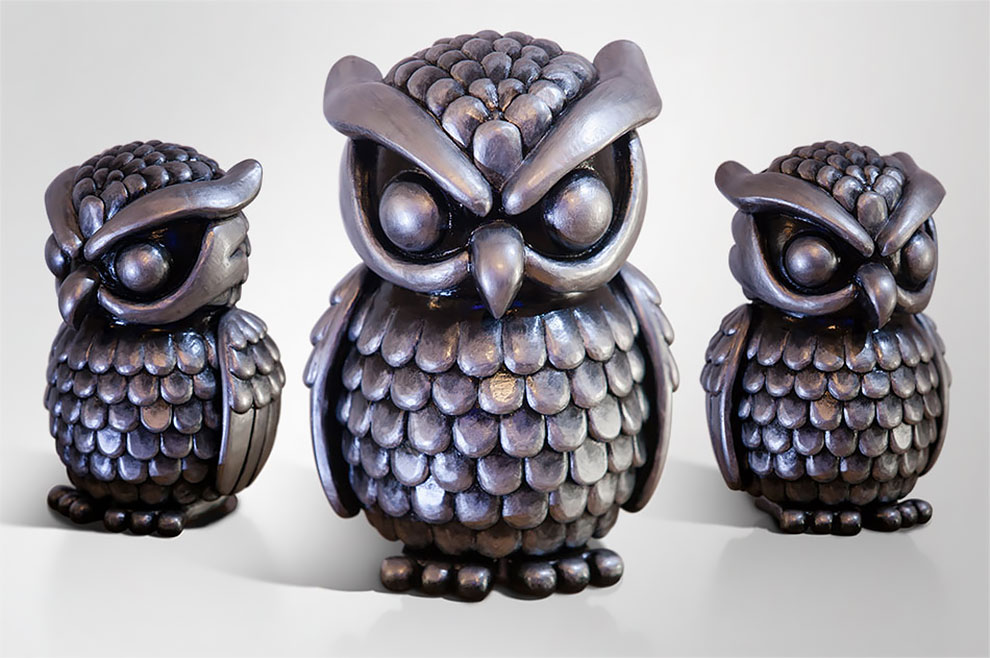 Nottingham-based Vic Fearn & Co. has created unusual coffins in the shape of beer and whiskey bottles, the Angel of the North, guitars and in a geometric style. The handmade caskets cost as much as £5,000 ($6,200). 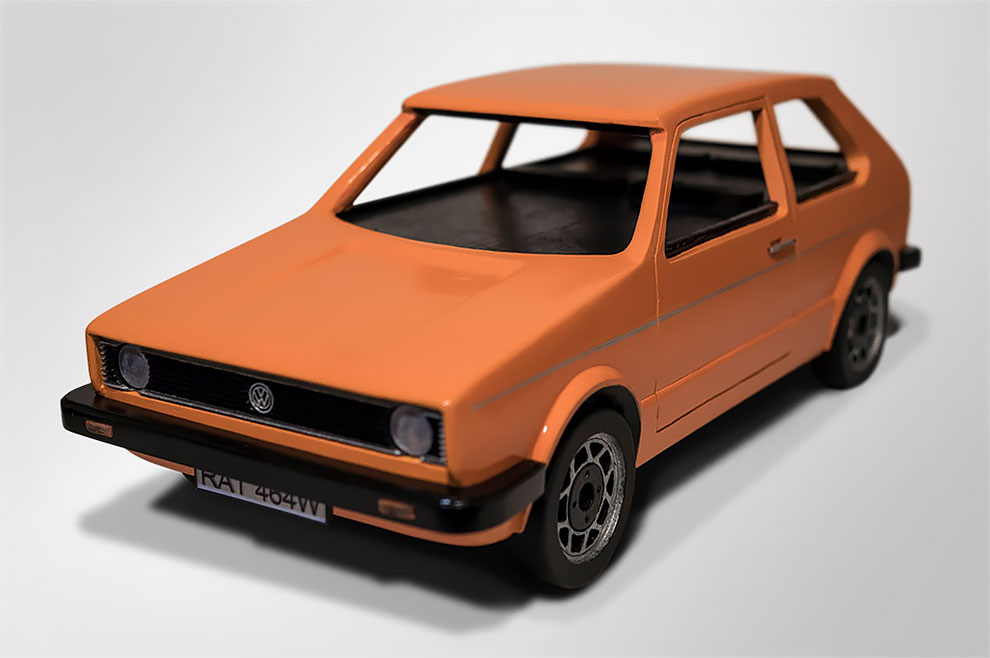 Mercedes Van
Relatives of the deceased commissioned this urn in the style of his favourite transport. 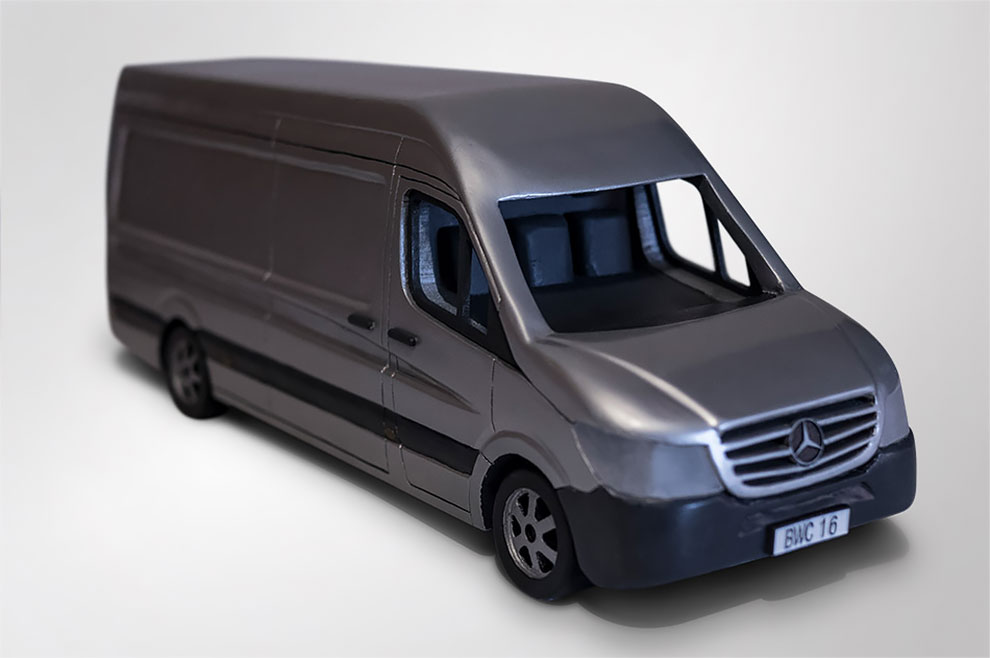 Owl
This owl urn was commissioned for the ashes of a wife and mother. 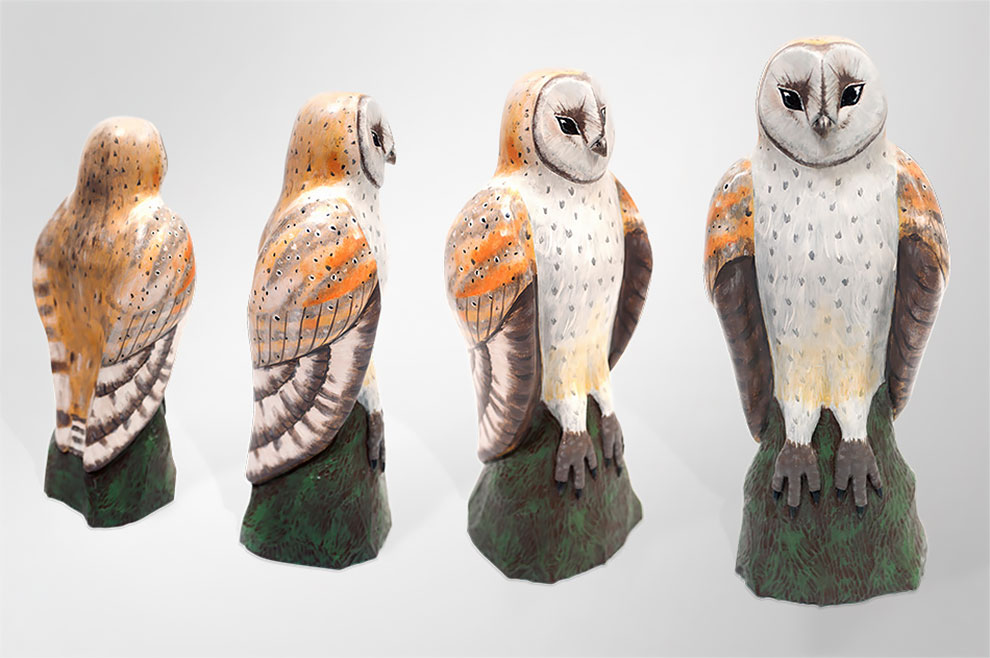 Tango 1
The Tango 1 orange airplane was commissioned by Malcolm Brocklehurst who often visits the factory to see his coffin and say hello. The coffin combines his twin passions of Blackpool football club and light aircraft aviation. The design is based upon a cartoon of himself flying a comically truncated aircraft, overflowing from the cockpit, with his football scarf trailing behind him. 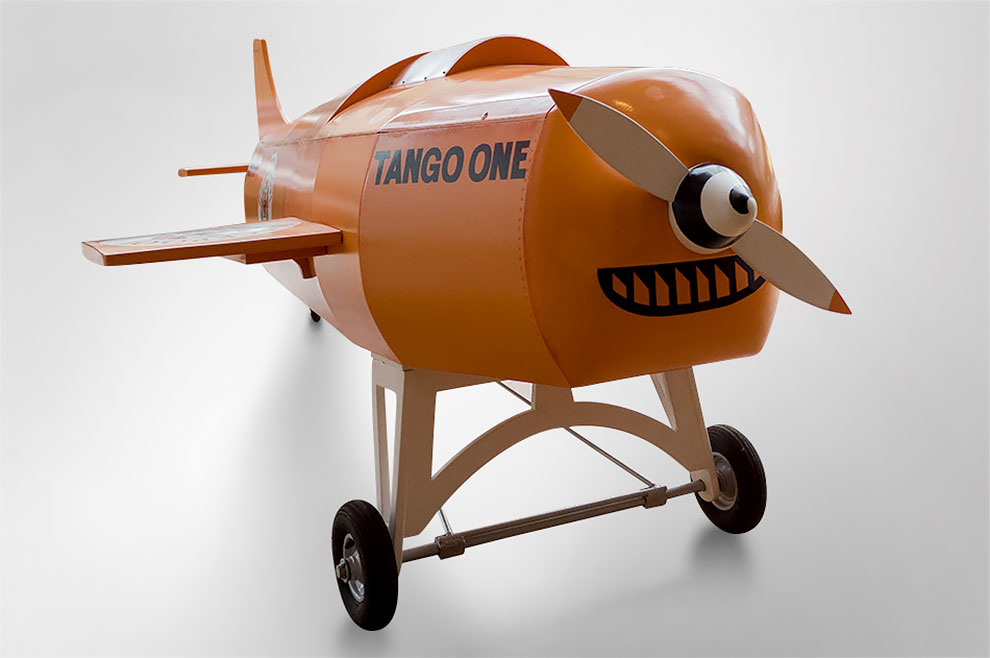 Ford Focus
This recent commission is a replica of a Ford Focus car with the customised registration plate of the late owner. It is painted in Chelsea blue in accordance with the client’s instructions. 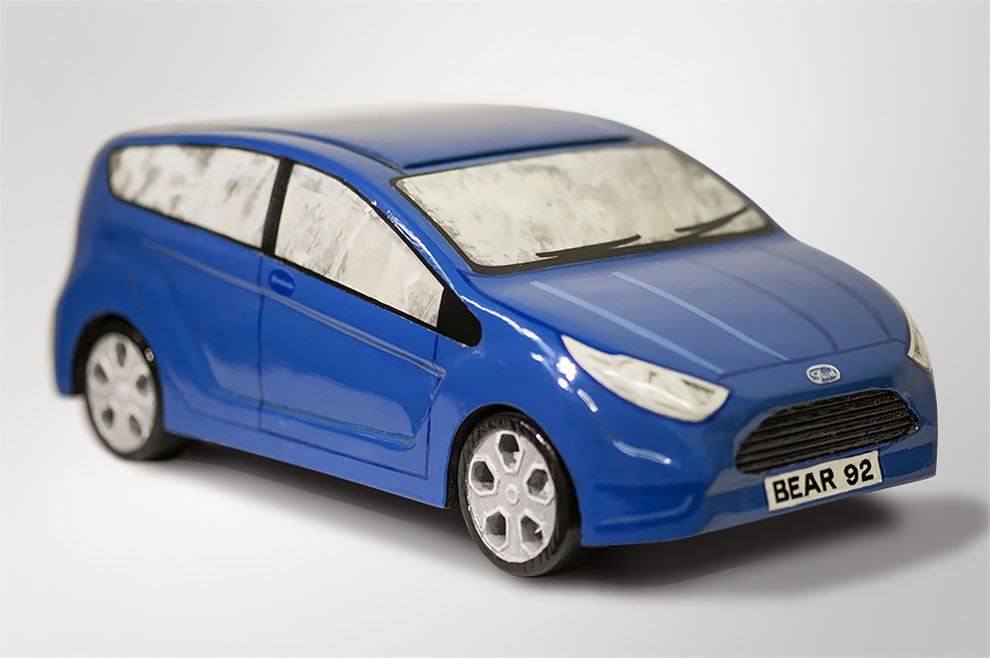 Enterprise 2
Our second Enterprise ashes urn was commissioned by an American lady. Unlike the first, which was completely painted, she requested it to be made in solid oak, with subtle, painted detail. A light silvery wash was applied which preserved the texture and grain of the oak and the details of the Enterprise overlaid. The whole was then given a hard lacquer finish. 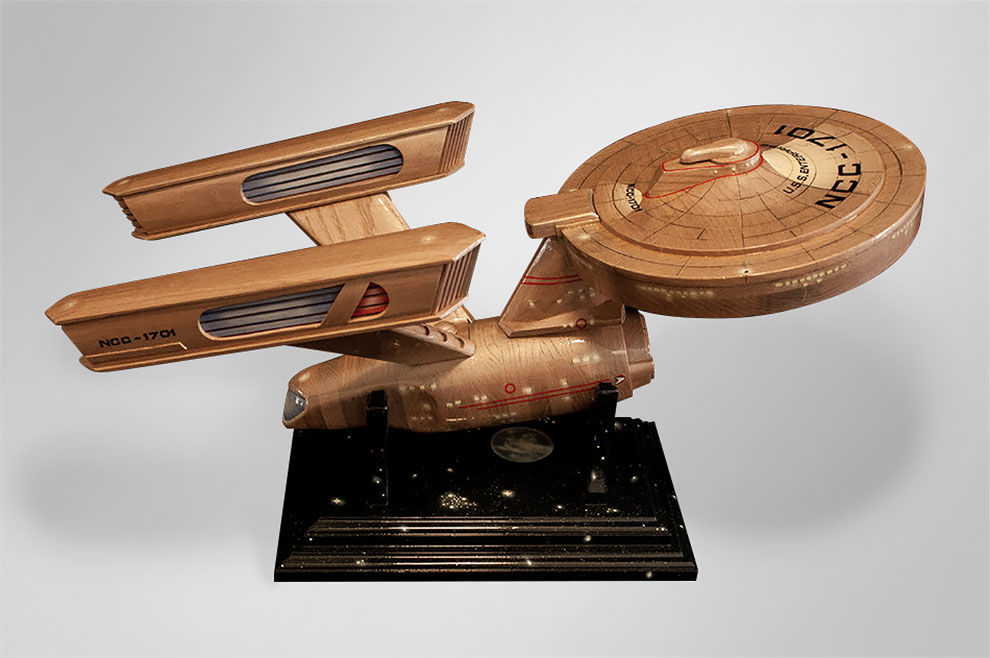 Triumph MkII
The owner drove his Triumph MkII for more than 20 years and used to joke that he wanted to be buried in it. This was the closest his widow could get to fulfilling his wish. 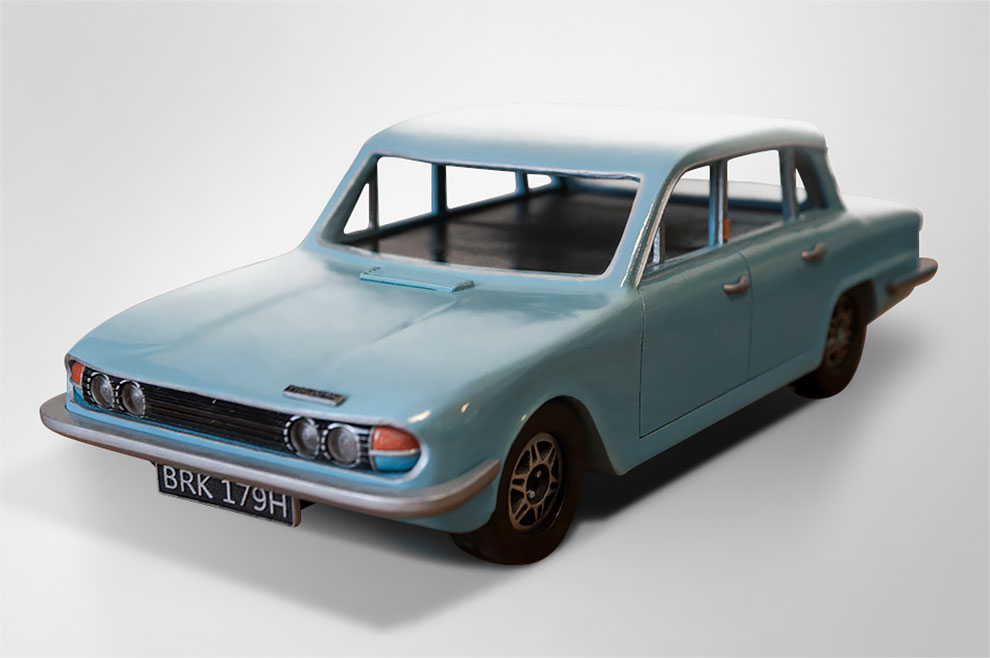 Jack Daniels
A Belfast man in the prime of life, working in the security industry in Afghanistan has commissioned this coffin, which celebrates his favourite tipple, “just in case”. The coffin, which stands 111″ high, is made of MDF and decorated with water-based paints. 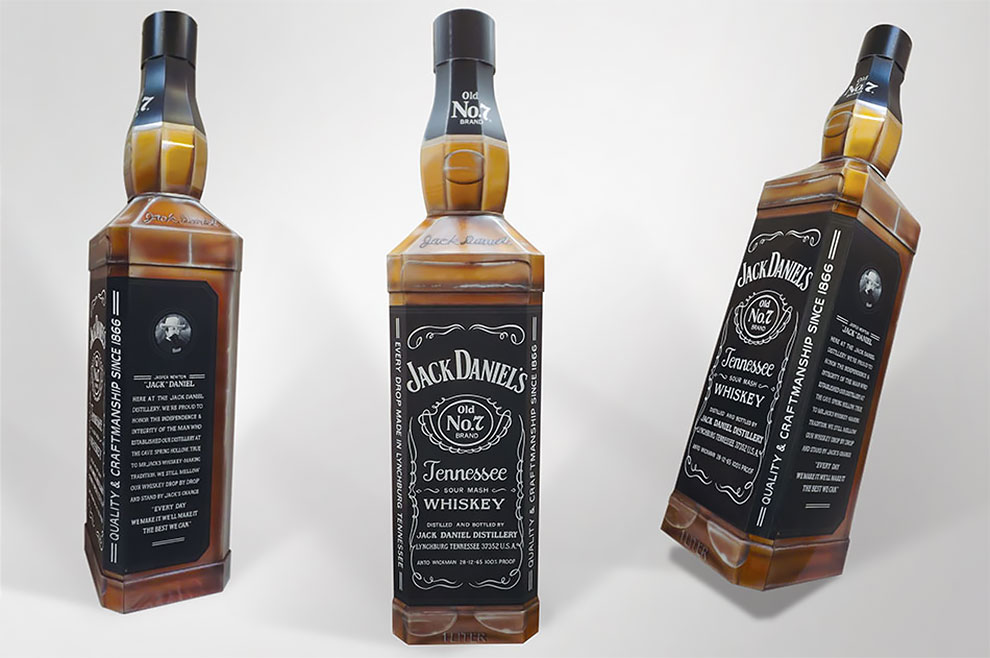 The Skip
To passers-by, a skip is a giant metal container, full of rubble, discarded furniture and television sets, which they ignore or help themselves to, according to their level of prosperity. However, John Gratton-Fisher, a building contractor, regards it as his business associate. On his final journey he will feel privileged to be put in a skip and go out with the rubbish. 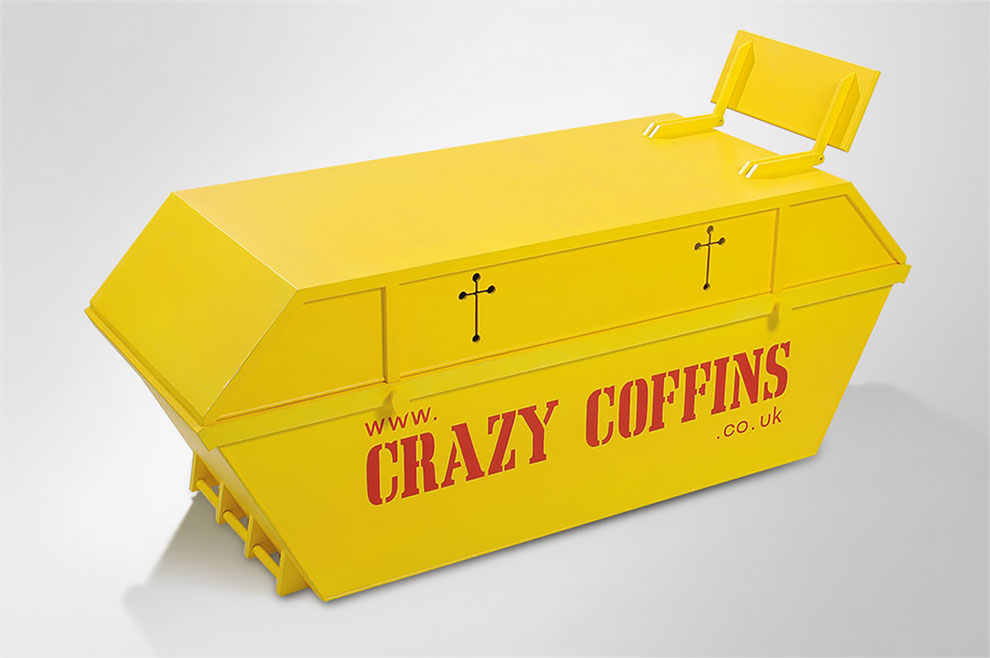 Canal Boat
The first canal boat was ordered by a narrow-boat enthusiast, who loved it so much, he decided to keep it in his living room! His wife shared his tastes, and he agreed to make her a narrow boat coffin of her own to match. 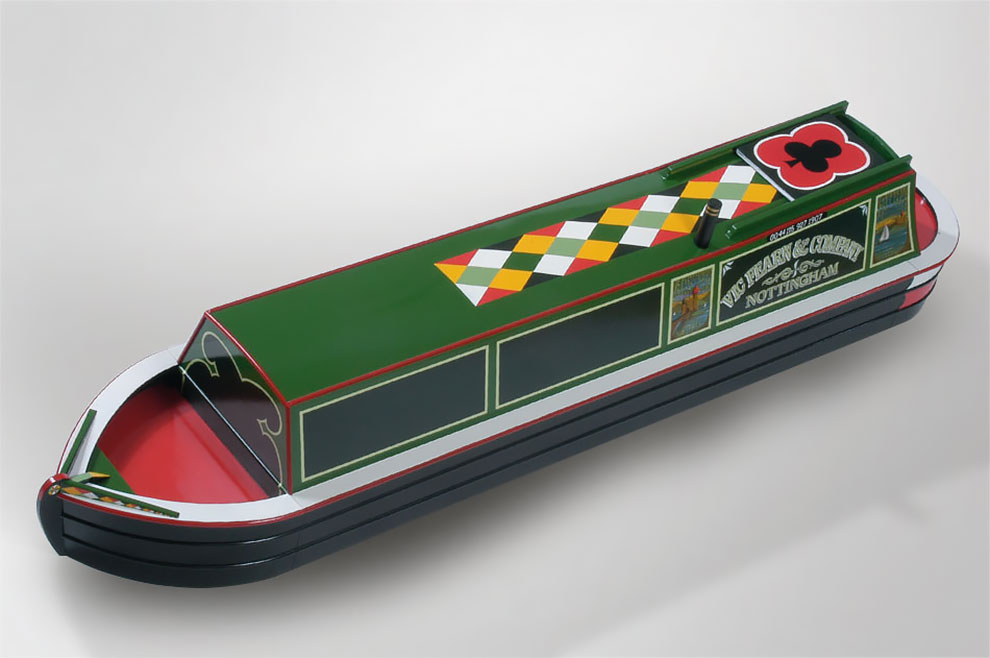 Yamaha Keyboard
This coffin order came via a funeral director, so all we can surmise is that a musician wished to depart his life in a favourite keyboard. 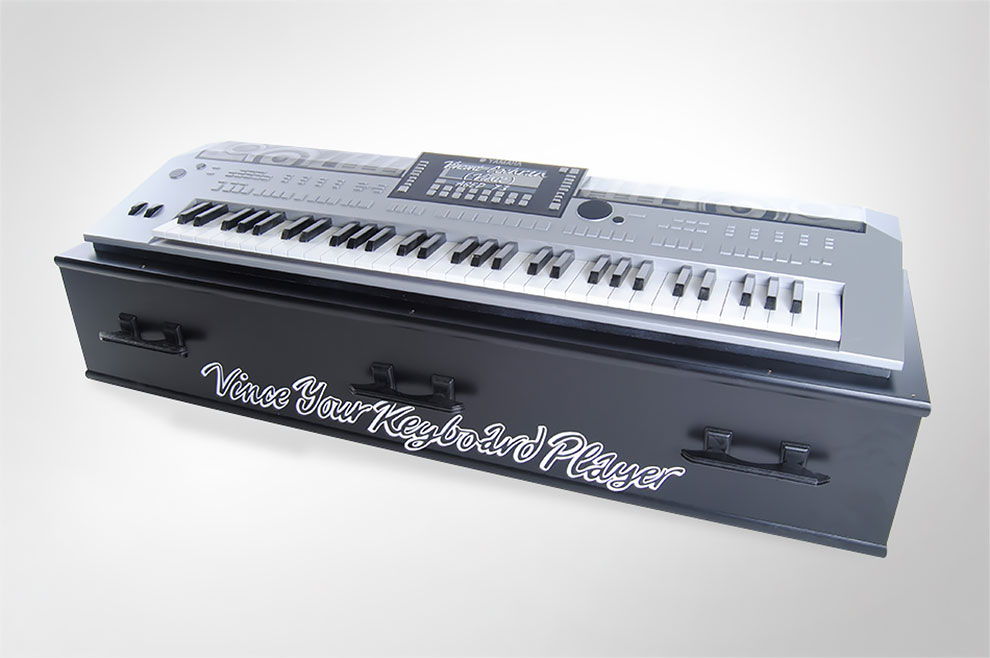 Nokia Phone
This coffin was commissioned by the family of a young person whose final weeks were spent in a hospice.
Messaging his family and friends was of great importance to him. The screen is blazoned with a text to his grandparent. 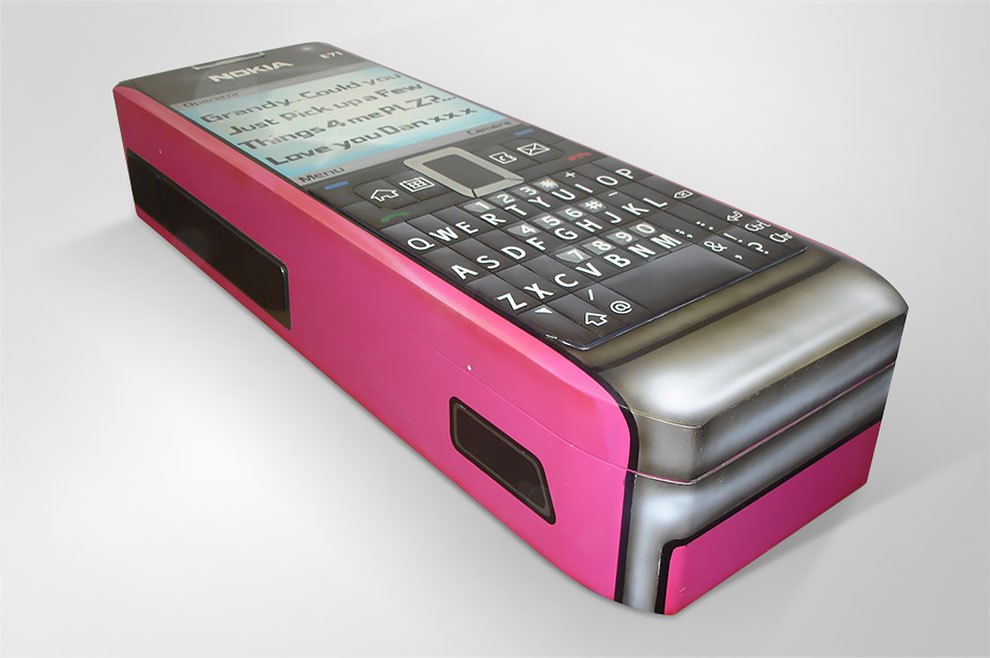 Viking Boat
The Viking ship was inspired by the Norwegian Osberg ship, and commissioned by a lady who had long been considering being buried at sea. The clinker-built prow of the Osberg ship is suggested by the paint work. The original ship carried the symbolism of the raven god Odin. 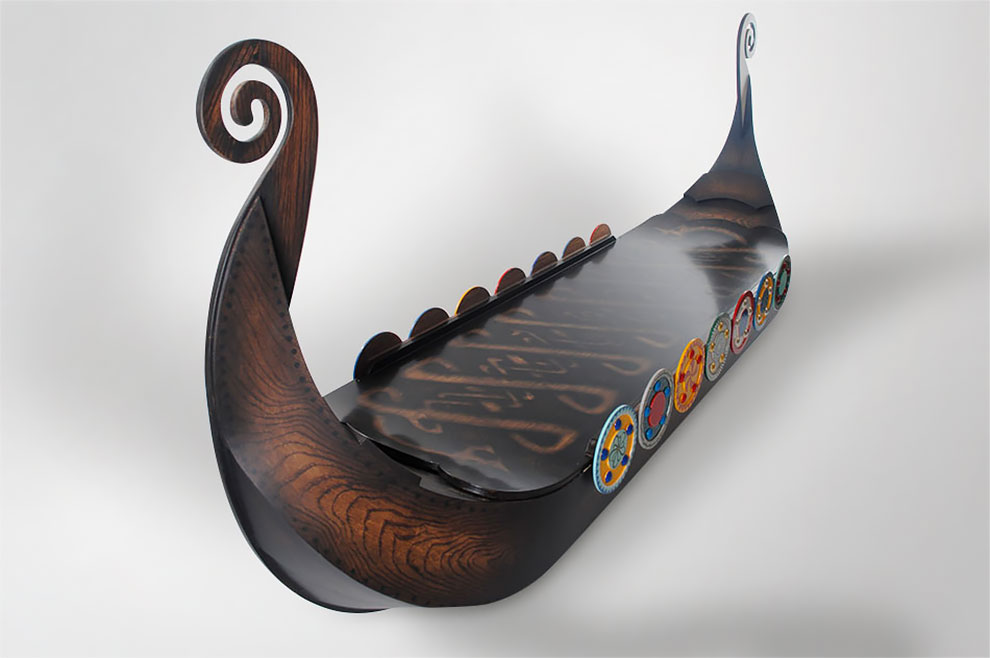 The Ballet Shoe
This coffin was commissioned by Mrs Pat Cox, nurse and music teacher, who’s lifelong passion was ballet. Mrs Cox has told us that she is arranging her funeral service around the ballet ‘La Fille Malgardée’ 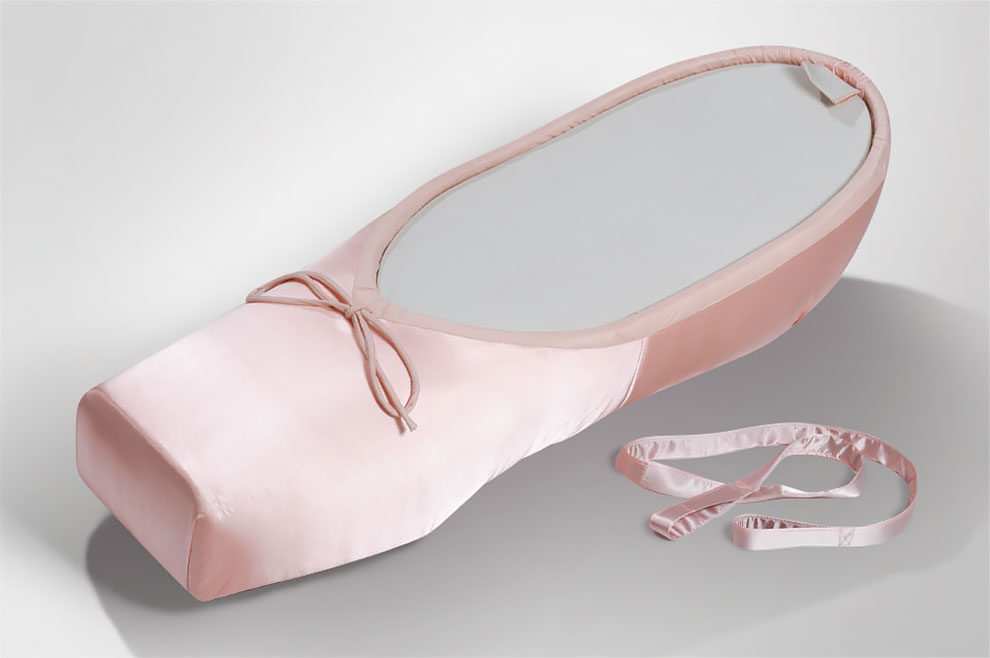 Acupuncture
Designed by Liam Mallin, Fine Arts graduate of Loughborough University, to present a holistic map of the body’s invisible pathways, or ‘meridians’, through which a person’s lifeforce, or ‘chi’ can flow freely from this world to the next. 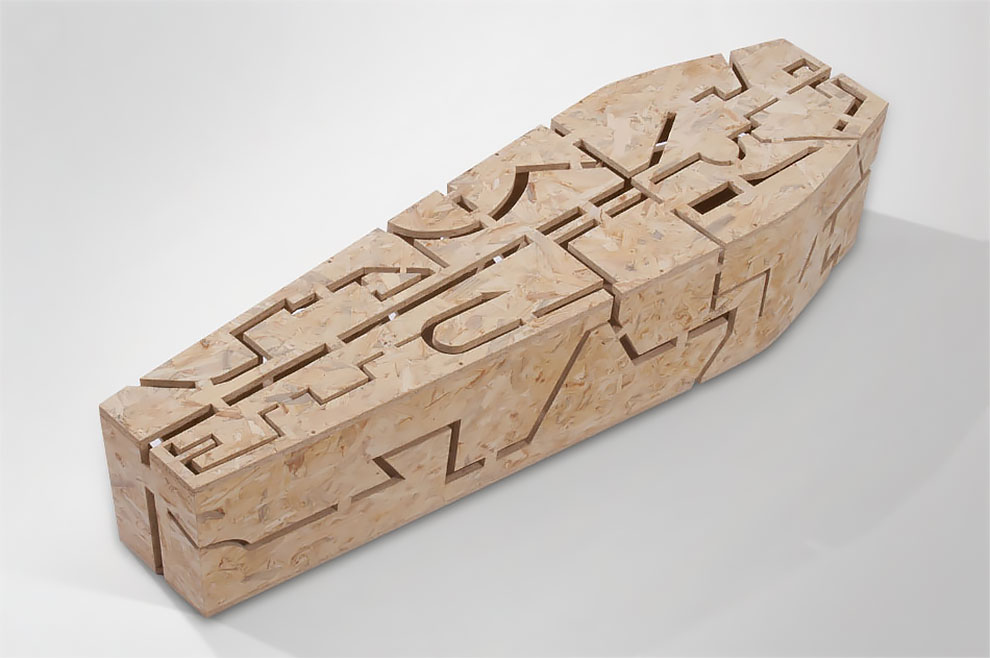 Rolls Royce
The order came from an undertaker on behalf of a family who wished to bury their father in their own garden, in a vintage Rolls Royce with “THE BOSS” on the registration plate. 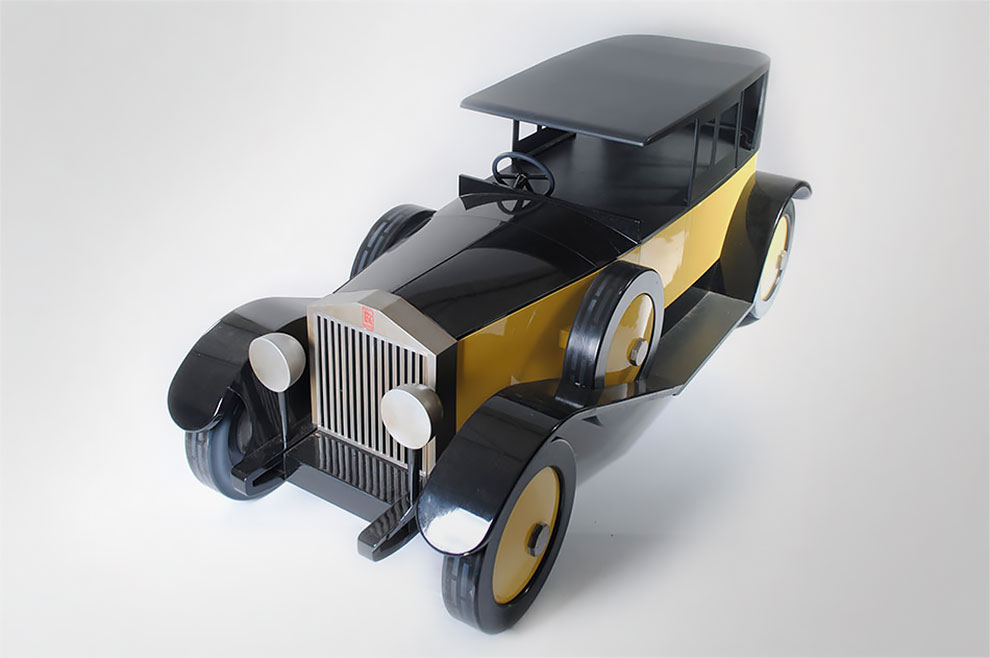 The Egg
The egg shape was commissioned by a woman who wished to be cremated in the foetal position. Since the egg is also a symbol of birth and regeneration, it is a fitting vehicle to celebrate the passing of one generation to another. This coffin was made using solid elm. 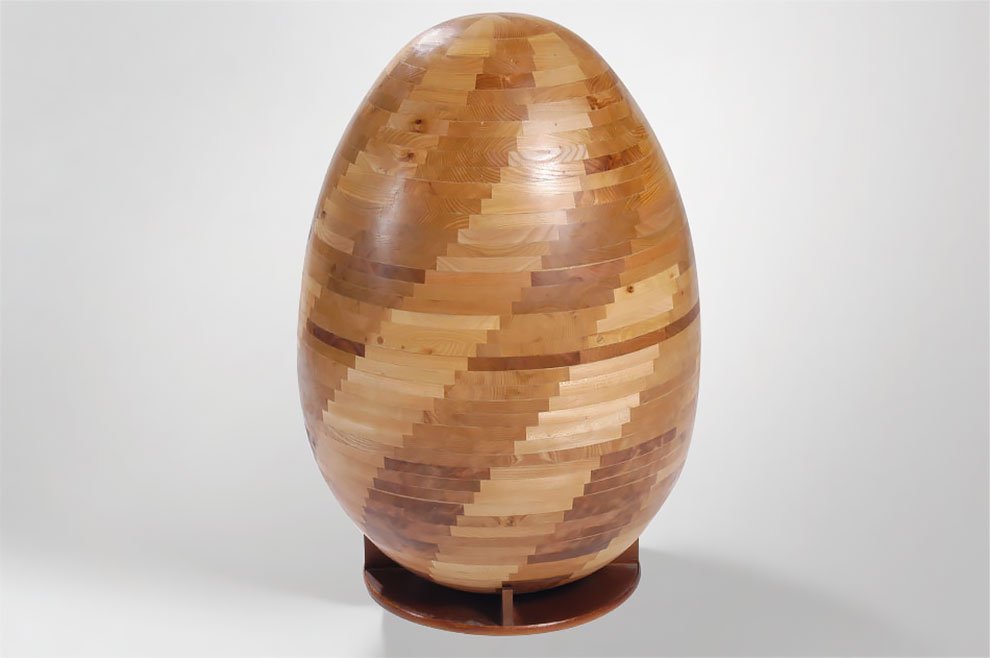 Sports Bag
Requests for coffins painted in football colours or emblazoned with a favourite supporter’s scarf or mascot are not unusual. A recent commission specified a coffin in the shape of a golf bag. While the company’s designers were experimenting, they came up with the idea of making a luxurious sports bag coffin in homage to Louis Vuitton. 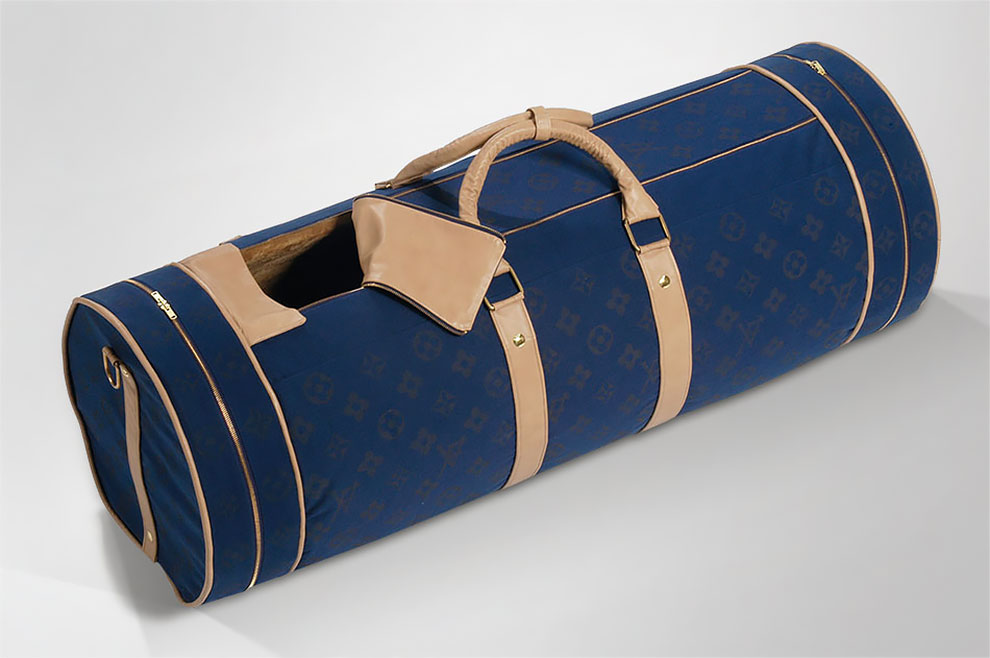 The Kite
Ivan Fox, boat-owner, enjoyed watching people flying their kites by the sea-side. One day the thought dawned on him, “We come into this life attached by a cord, and we fly up to heaven, attached by a chord.” 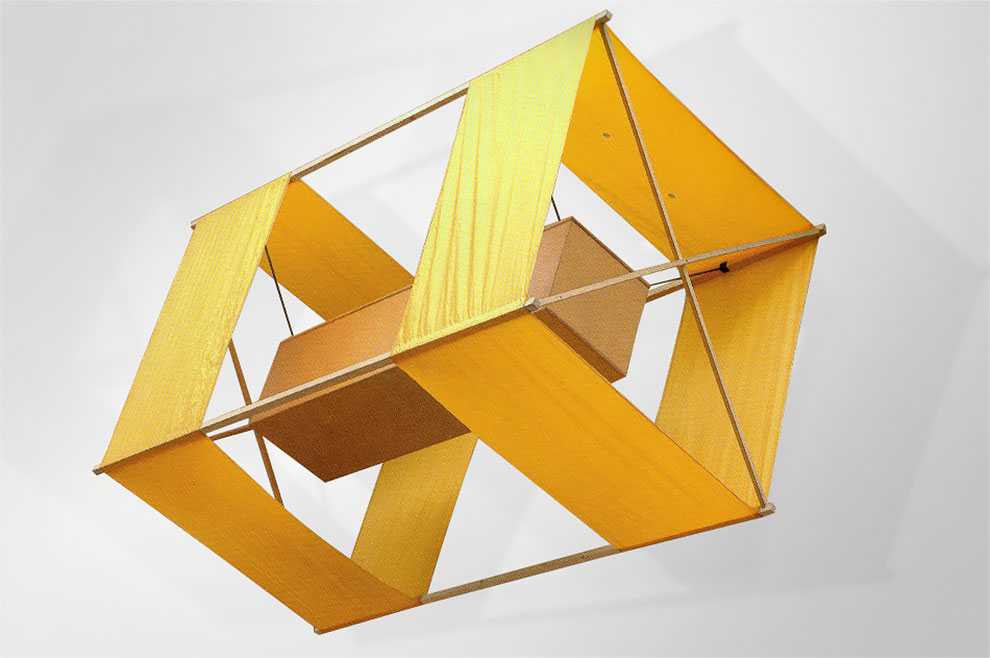 The Wicker Man
The sixties cult film “The Wicker Man” is the reference point to this design by Richerd Mullard. However, the resonance is altogether gentler and atuned to nature. Burial in wicker coffins is now well established among those seeking an (ecological) alternative to standard coffins. Paul Weir, a professional basket maker, from Bedfordshire, has remade “The Wicker Man” using traditional methods found in English basketry. 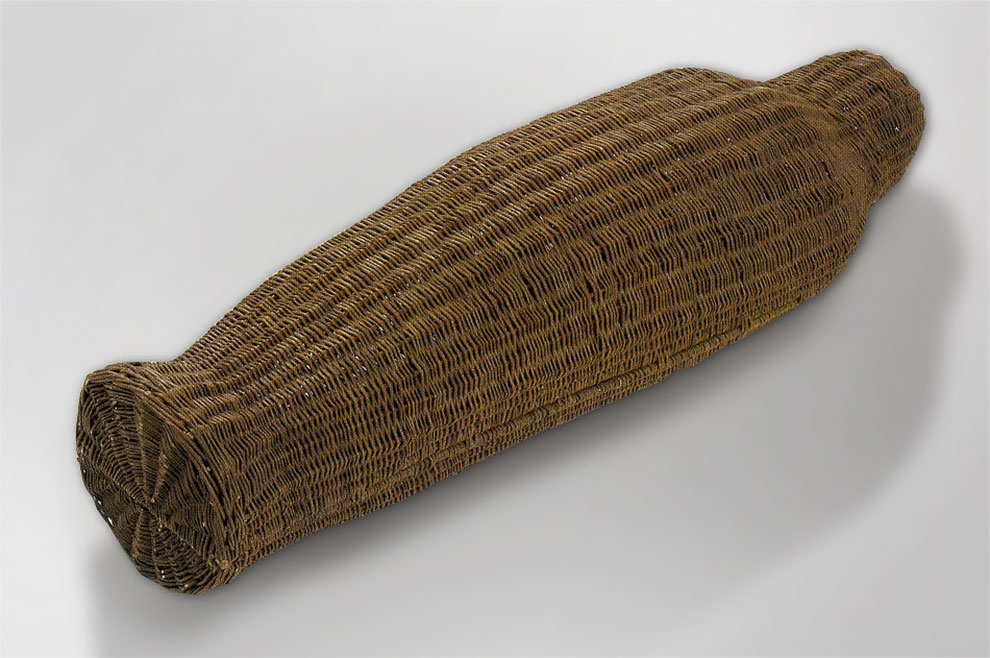 Urban Decay
An eleven year old boy, victim of a skateboarding accident, was buried at his family’s request in a replica of the board he played on every day. 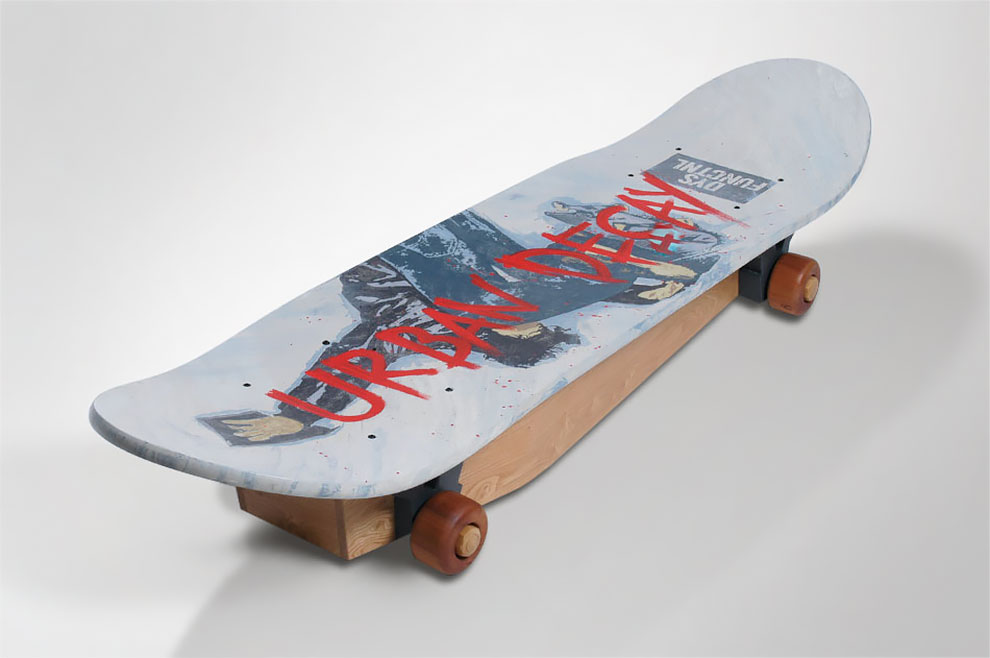 The Guitar
The family of a teenage boy, killed in a domestic accident, chose to bury him in a replica of the guitar he loved so well. 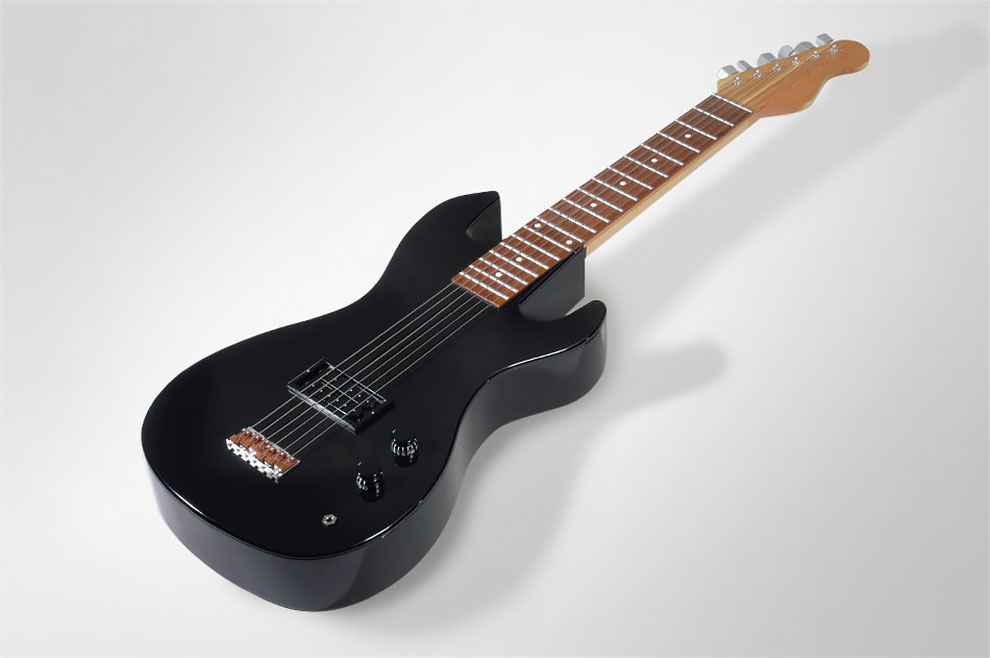 The Corkscrew
This coffin was made as a compliment to the City of Cork, on the occassion of the “Crazy Coffins” exhibition there. The Corkscrew also recommends itself as a departure point for a wine connoisseur.