Amazing Vintage Photos Of The Grateful Dead’s Wall Of Sound, 1974 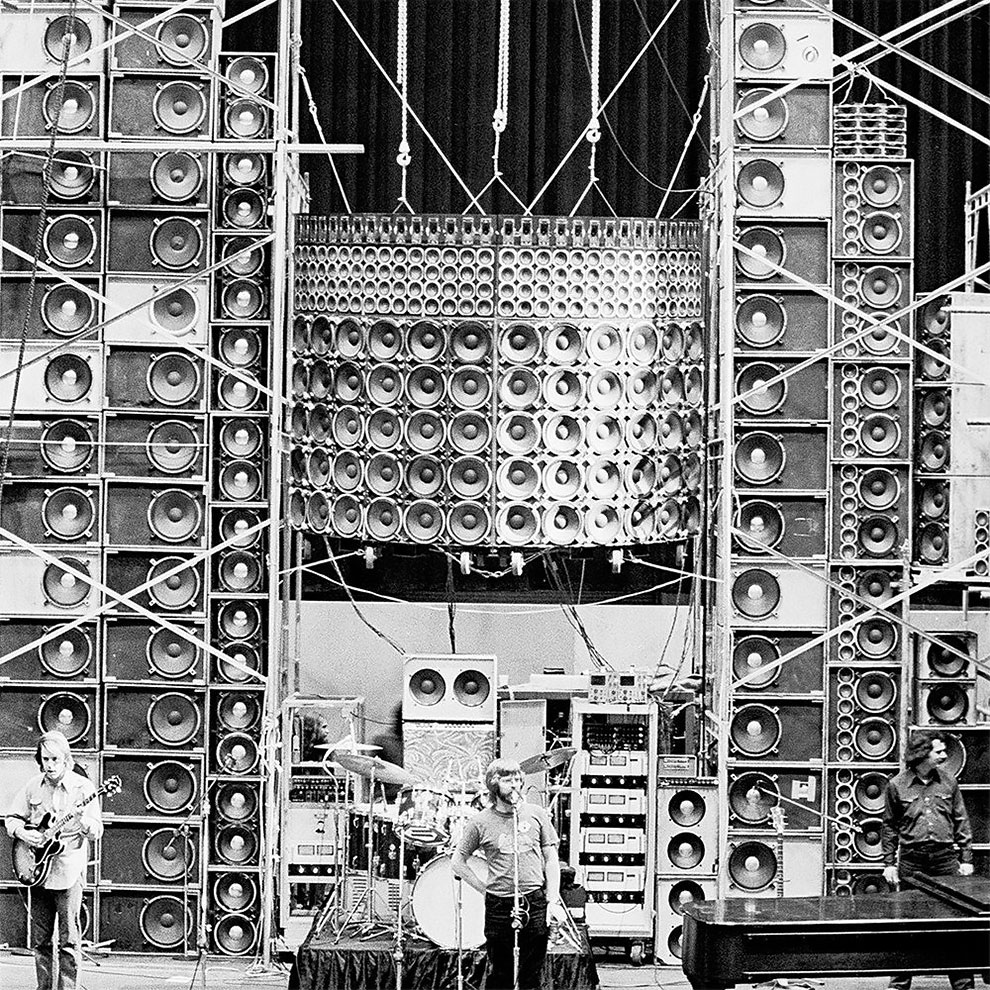 Weighed over 70 tons, comprise dozens and then hundreds of amps, speakers, subwoofers, and tweeters, stand over three-stories tall and stretch nearly 100 feet wide. Its name could only be the “Wall of Sound”. 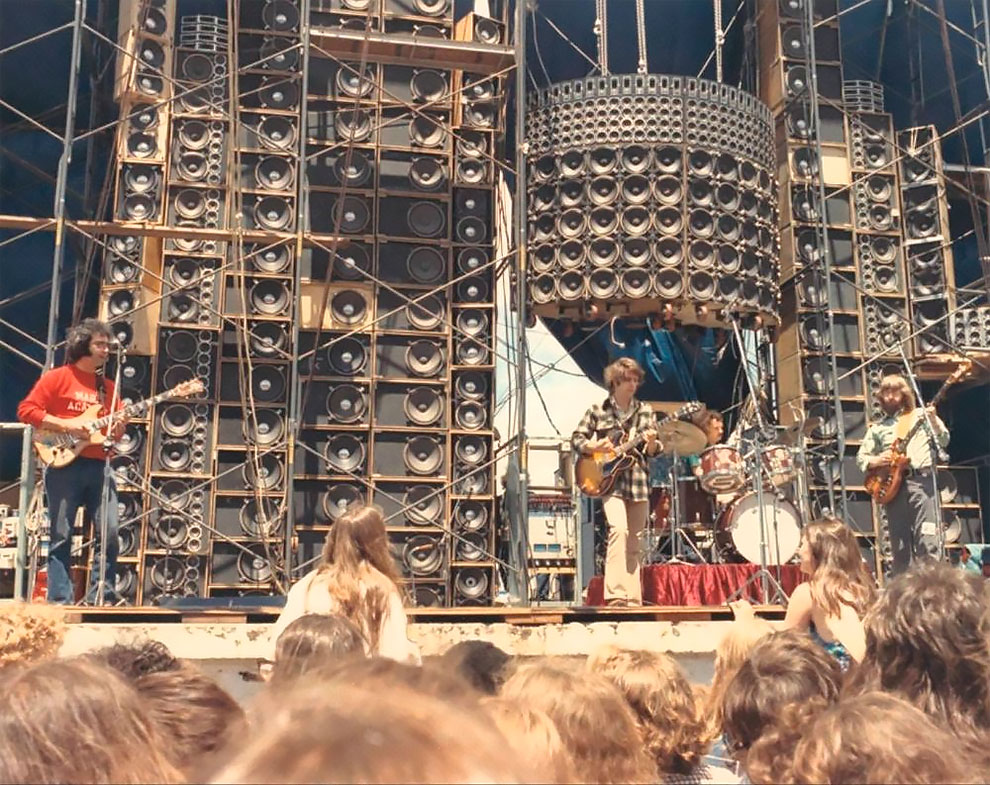 The Wall of Sound was an enormous public address system designed specifically for the Grateful Dead’s live performances in 1974. It was the creation of audio engineer Owsley “Bear” Stanley. The Grateful Dead gave the sneak peek of the Wall of Sound on February 9, 1973 at Stanford University’s Maples Pavilion but it was on March 23, 1974 when they debuted the completed system during their tour stop at the Cow Palace in Daly City, California. 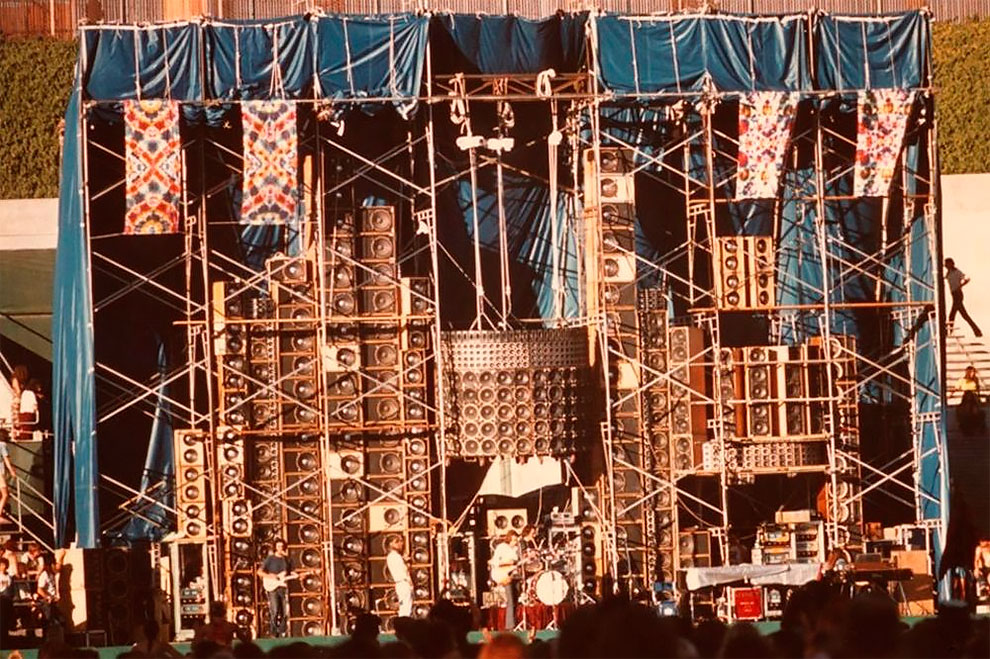 After got out of prison in late 1972, Stanley, Dan Healy and Mark Raizene of the Grateful Dead’s sound crew, in collaboration with Ron Wickersham, Rick Turner, and John Curl of Alembic, combined six independent sound systems using eleven separate channels, in an effort to deliver high-quality sound to audiences. Vocals, lead guitar, rhythm guitar, and piano each had their own channel and set of speakers. 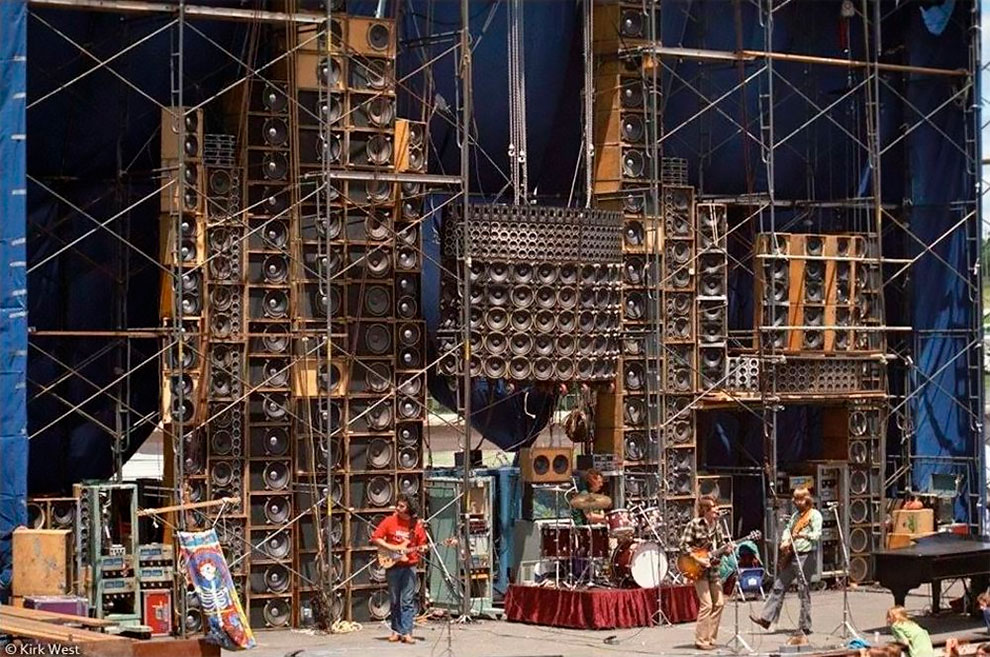 Phil Lesh’s bass was piped through a quadraphonic encoder that sent signals from each of the four strings to a separate channel and set of speakers for each string. Another channel amplified the bass drum, and two more channels carried the snares, tom-toms, and cymbals. Because each speaker carried just one instrument or vocalist, the sound was exceptionally clear and free of intermodulation distortion. 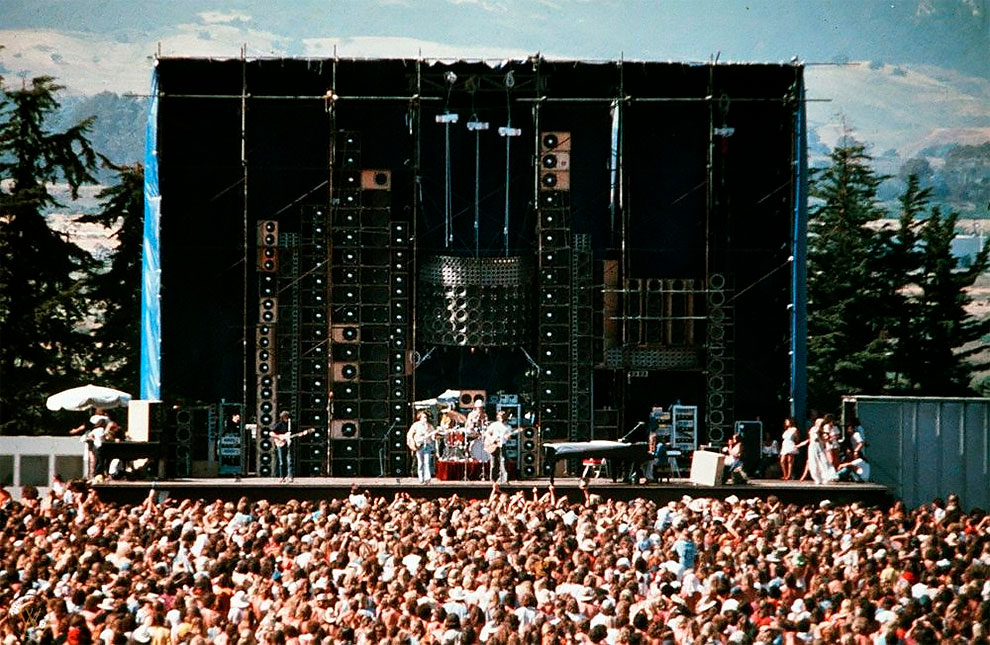 Bassist Phil Lesh told Rolling Stone magazine, “I started talking to Bear about our sound problems. There was no technology for electric instruments. We started talking about how to get around distortion and get a pure musical tone. He did some research and said, ‘Let’s use Altec speakers and hi-fi amps and four-tube amps, one for each instrument, and put them on a piece of wood.’ Three months later we were playing through Bear’s sound system.” 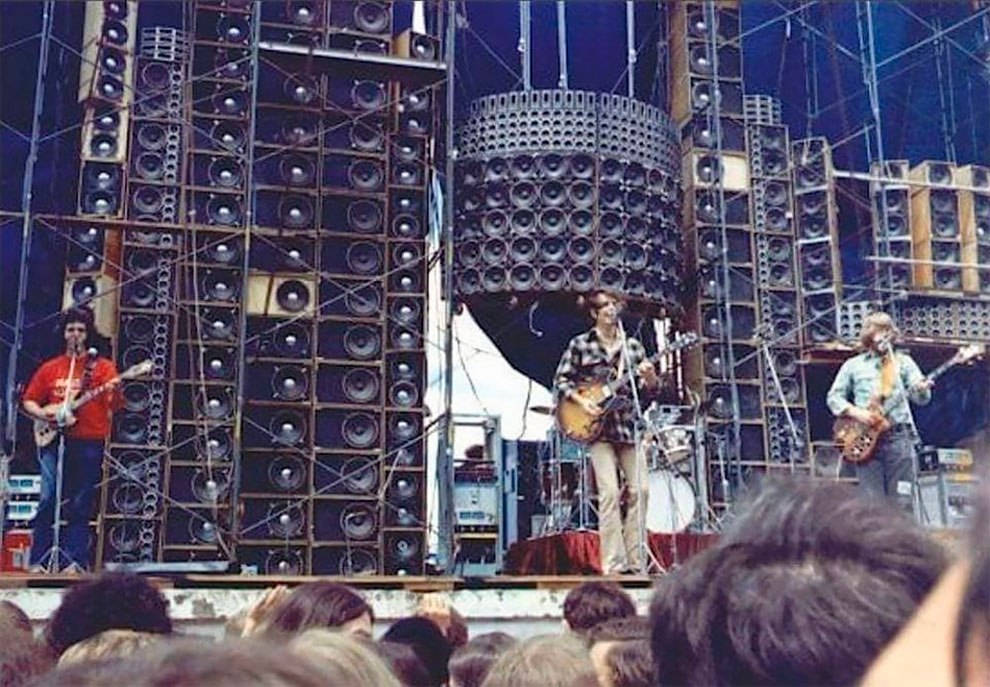 vThis system projected high-quality playback at six hundred feet with an acceptable sound projected for a quarter mile, at which point wind interference degraded it. The Wall of Sound was the first large-scale line array used in modern sound reinforcement systems, although it was not called a line array at the time. The Wall of Sound was perhaps the second-largest non-permanent sound system ever built. 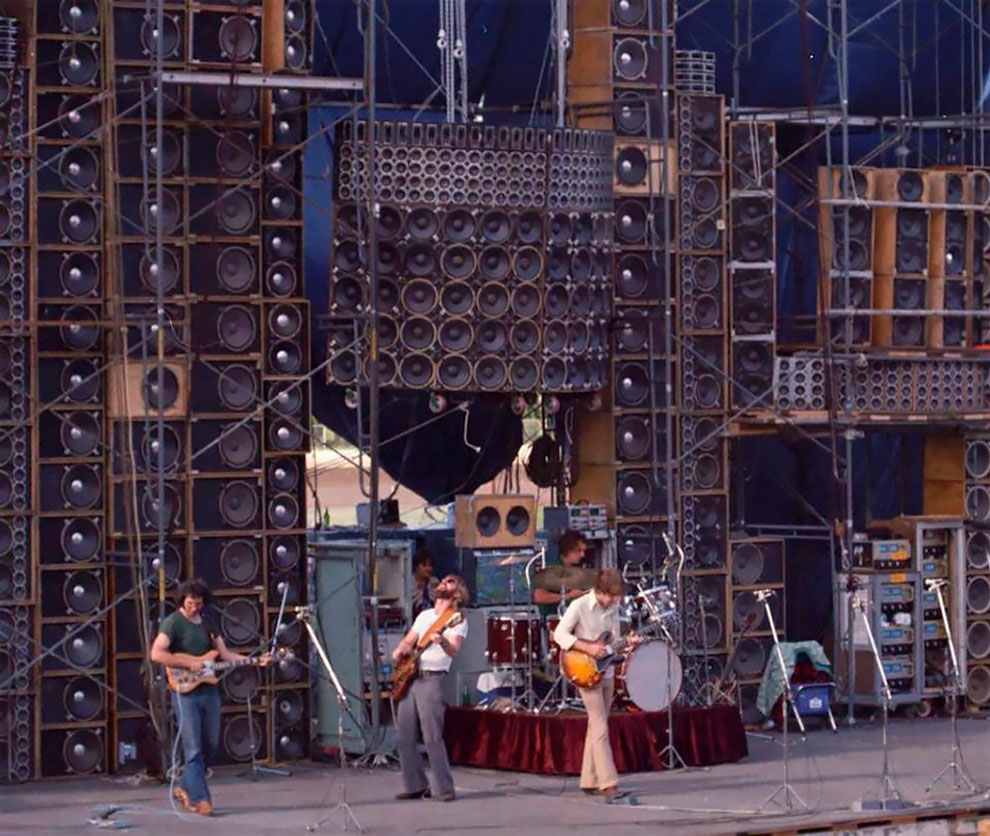 There were multiple sets of staging and scaffolding that toured with the Grateful Dead. In order to accommodate the time needed to set up and tear down the system, the band would perform with one set while another would “leapfrog” to the next show. According to band historian Dennis McNally, there were two sets of scaffolding. According to Stanley, there were three sets. Four semi-trailers and 21 crew members were required to haul and set up the 75-ton Wall. 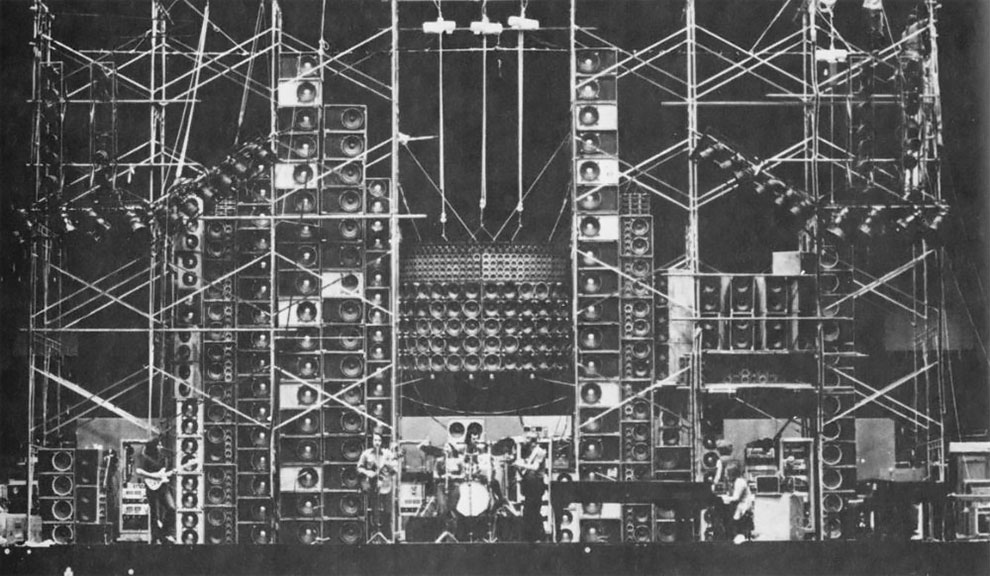 As Stanley described it, “The Wall of Sound is the name some people gave to a super powerful, extremely accurate PA system that I designed and supervised the building of in 1973 for the Grateful Dead. It was a massive wall of speaker arrays set behind the musicians, which they themselves controlled without a front of house mixer. It did not need any delay towers to reach a distance of half a mile from the stage without degradation.” 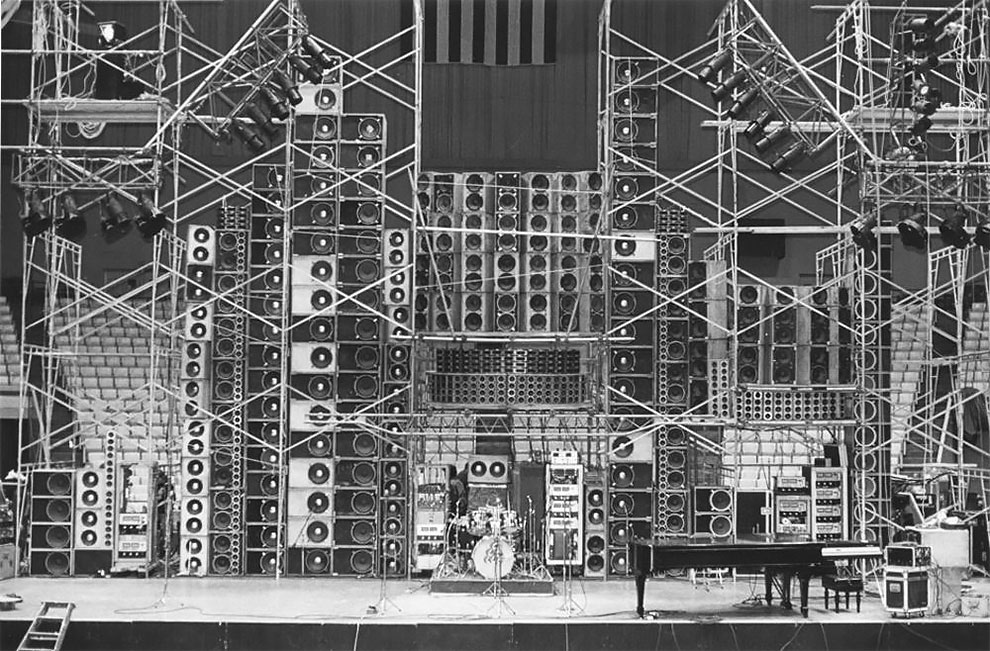 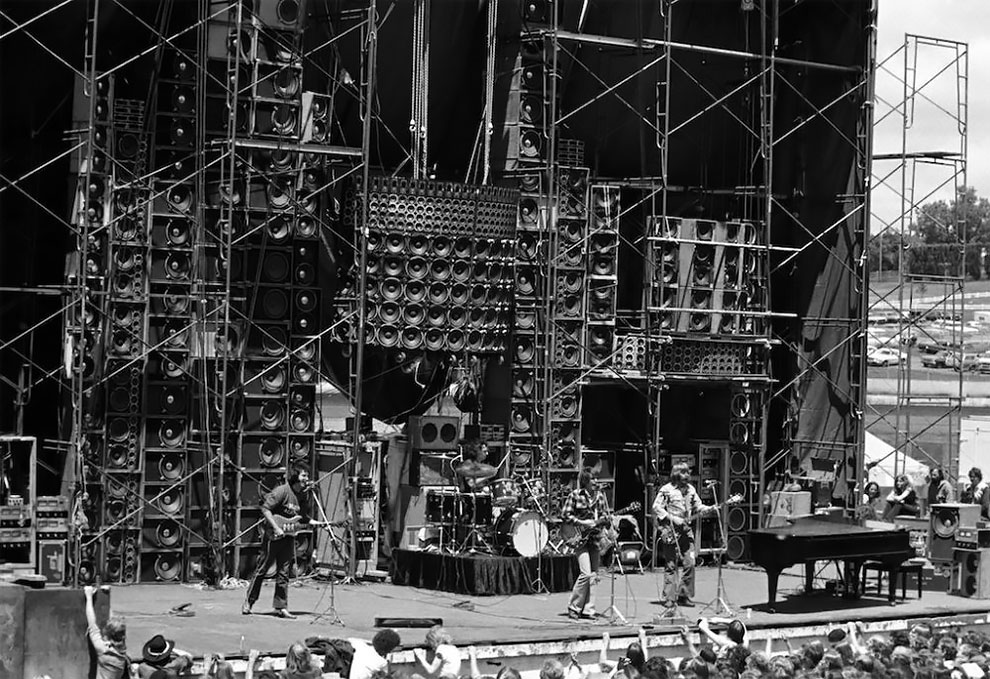 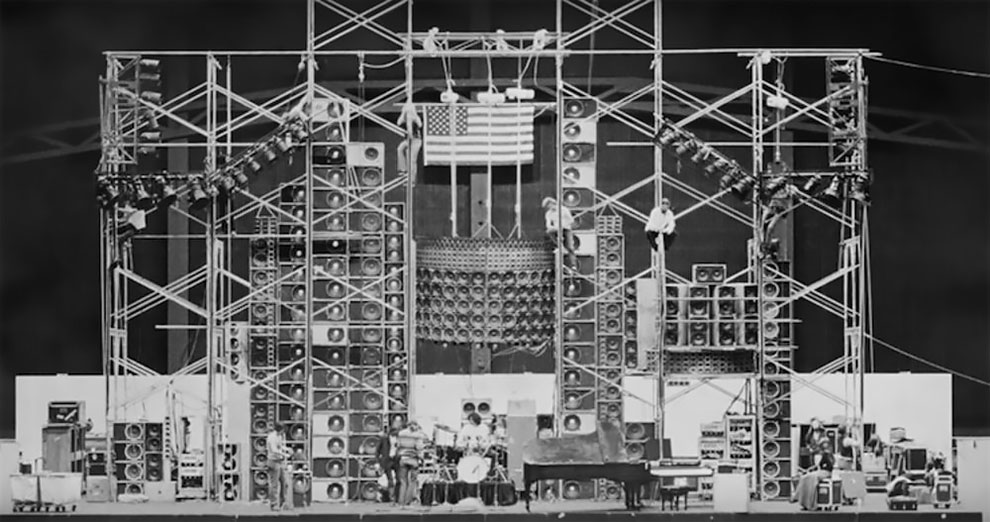 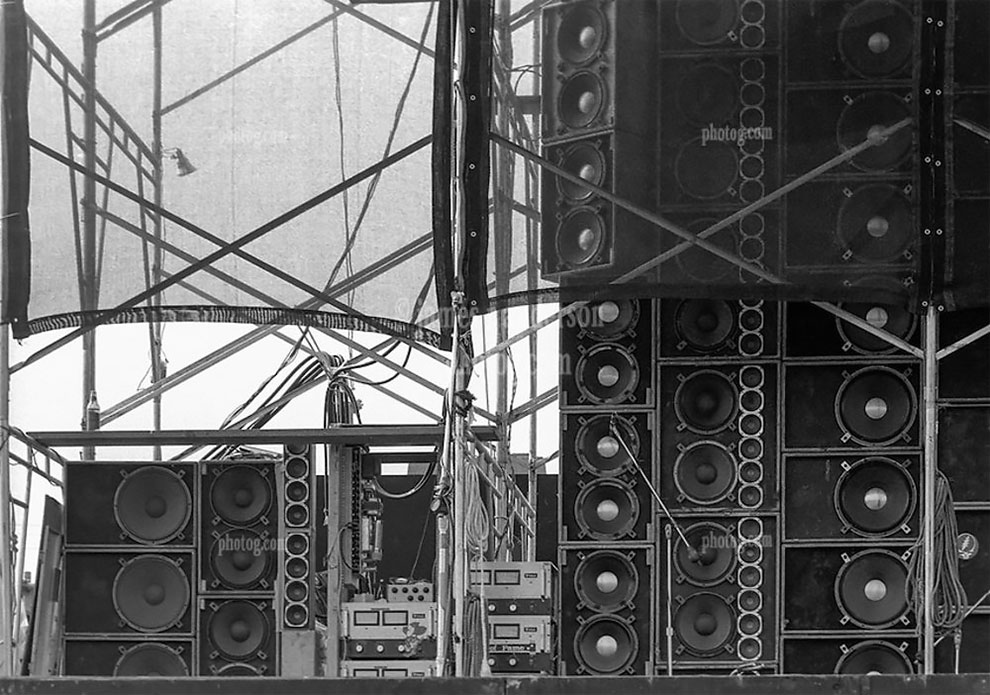 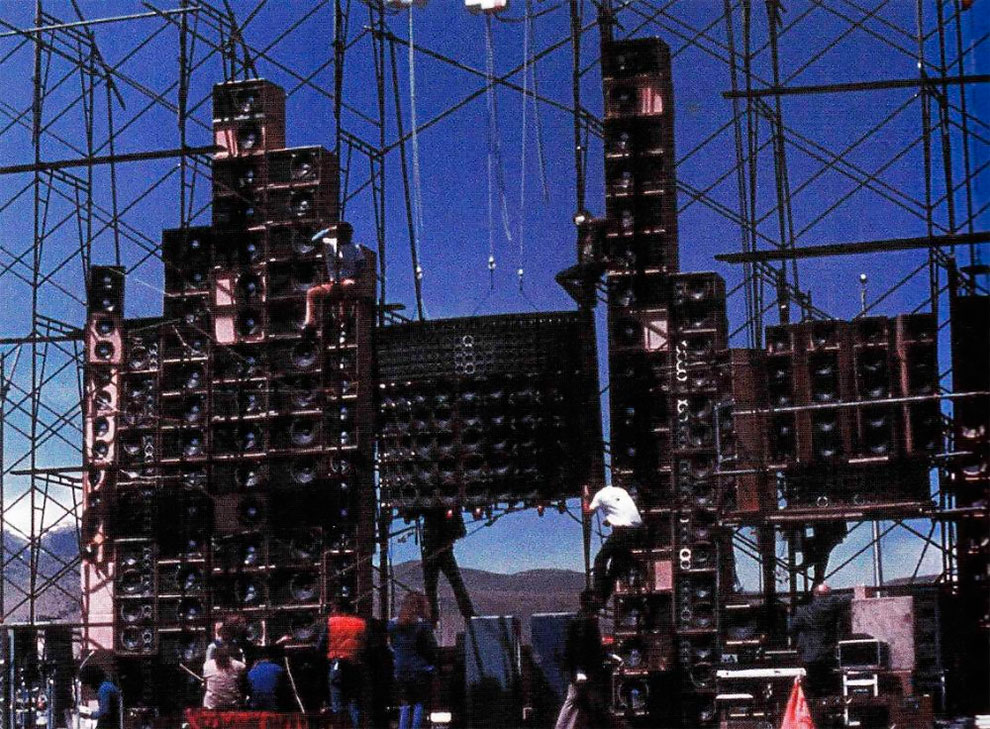 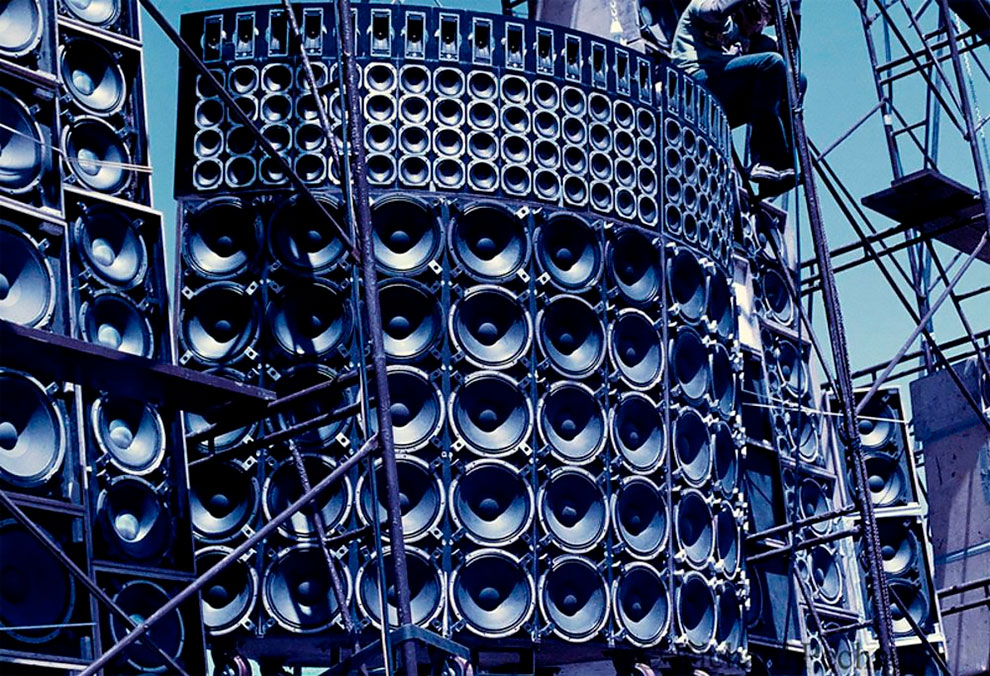 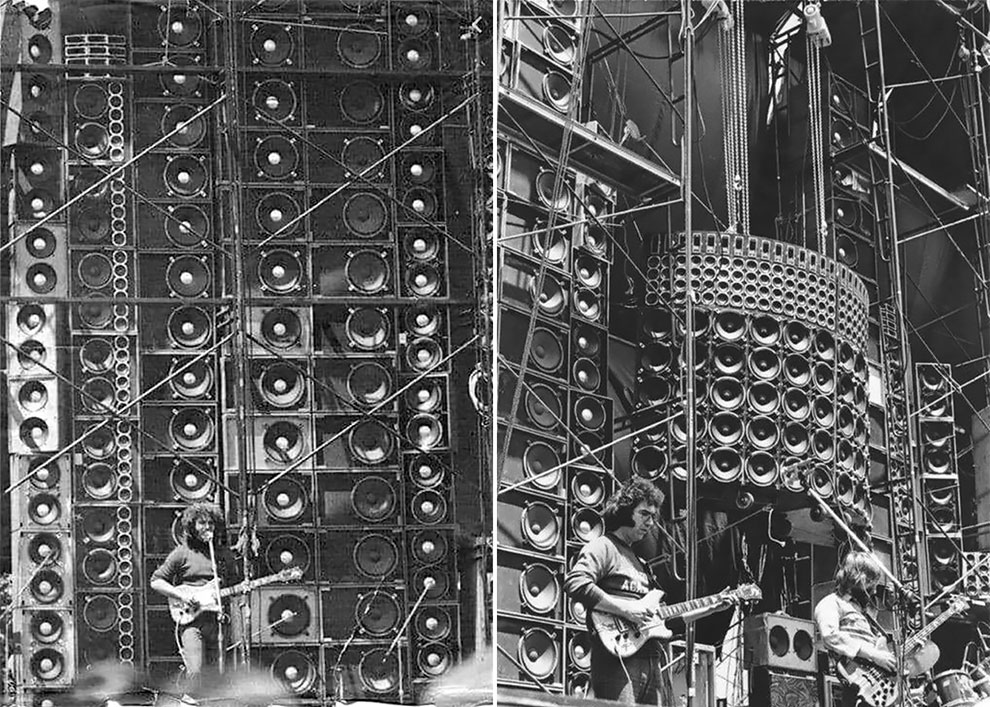 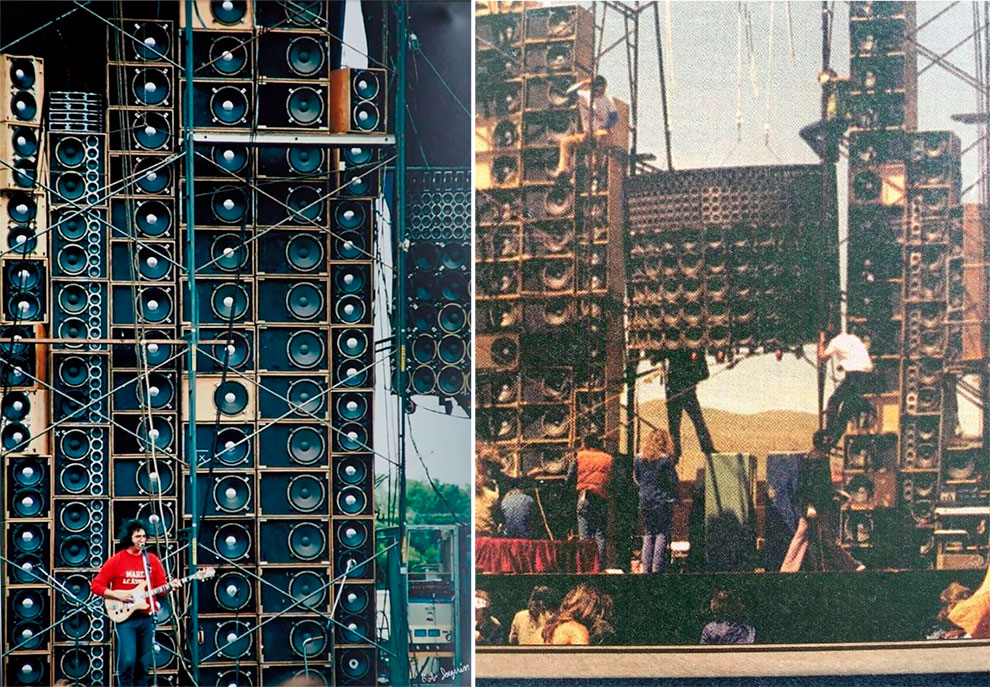 Australian Farmer Fights Erosion With A Patchwork Of Geometric Designs
Small Wonders in the Water
Before The Internet: Here's What A Publishing Company's Office Space Looked Like In The Mid-1980s
Watch Parts Motorcycles
Robot Guards will soon begin Patrolling South Korean Prisons
sQuba - Underwater Concept Car
Amazing dynamic projects by Aaron Koblin
An Incredible Jet Engine Barbeque Grill Built By Delta Airlines Techs Using Scrapped Pratt & Whitney Parts
This Small Artificial Island Is Thought Of As An Oasis Of Relaxation
The iCar: Five Apple Products Reimagined As Cars
"Passing Cloud" Reimagines What 21st Century Travel Can Be
This Oversized Helmet Is Designed To Block Out Noise In The Workplace
Apple Store Opening In Bologna, Italy
The Real Land-Walker Robot From Japan
Bizarre Vintage Photos Of Steam Engines After A Boiler Explosion From The Late 19th And Early 20th Centuries
The Nissan Production Line
As The Standard Of The World Turns: Lovely Photos Of 1965 Cadillac Coupe DeVille
You'll Be Amazed After Seeing The Classy Interior Of This Rolls-Royce!
This Supercargo Vehicle Is Something Out Of This World
Felt Jewelry by Hanan Kedmi for Real Geeks
"Goodbye, Diesel Train": This Brutal Soviet Bad Boy Has Been Destroyed In Estonia
This Elderly Couple Bought Their Household Appliances In 1950s, 50 Years Later They Still Work!
Giant Swings To Abolish The Wall Between The United States And Mexico: Take That, Donald Trump!
Computerspielemuseum in Berlin
Grateful Dead, sound, wall