A family of four tries to get on with everyday life despite living in a room where there is barely space to move in the urban slums of Hong Kong. 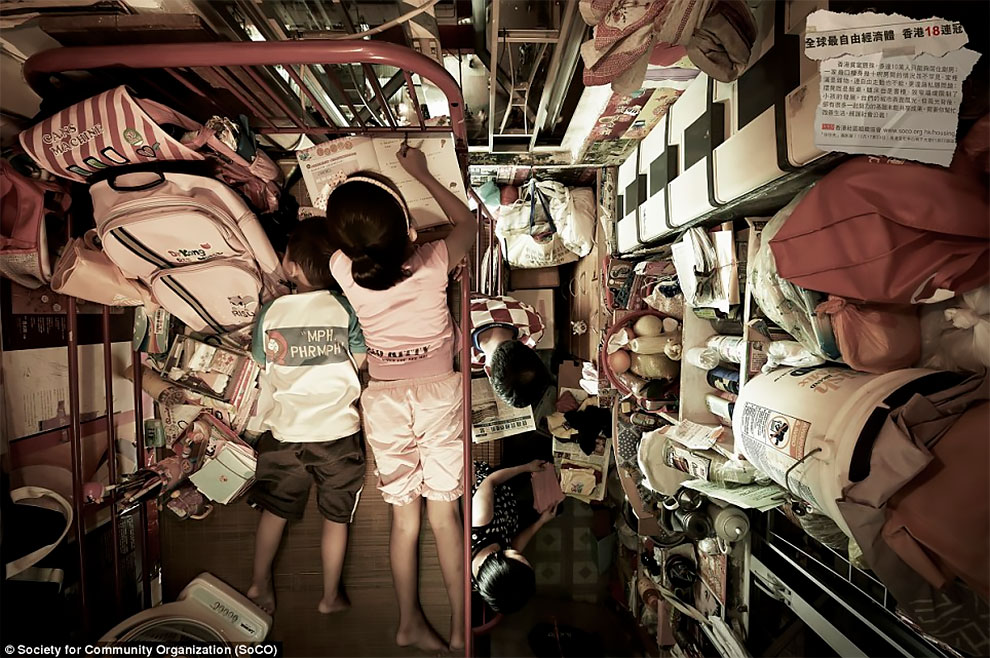 They are barely bigger than a toilet cubicle. Yet these depressingly cramped spaces serve as a kitchen, living room, dining room, bedroom, pantry and everything in between for their cooped-up inhabitants.

Those unfortunate enough to live in these urban slums range from the elderly and unemployed to low-income families and singletons.

Their location? Hong Kong. One of the richest cities in the world.

An elderly gentleman writes a letter completely surrounded by his life’s possessions. It’s not clear from the angle of this image where he sleeps or how he gets in and out. 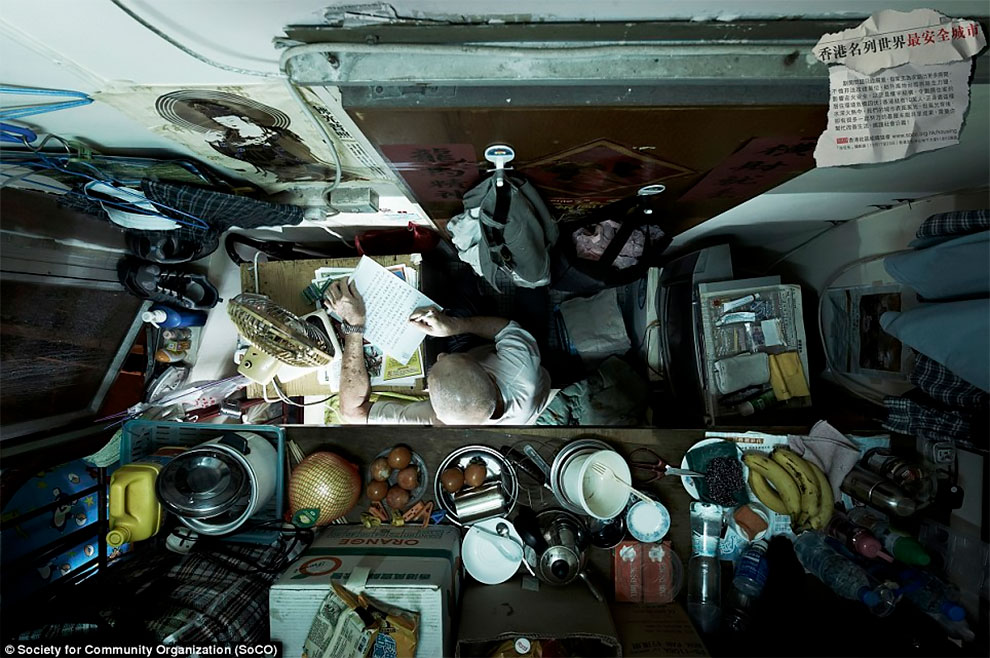 A man takes a nap on his bed which fills most of the tiny 4ft x 7ft room. These bird’s-eye images have been taken by a social group documenting the plight of the Hong Kong’s most underprivileged people. 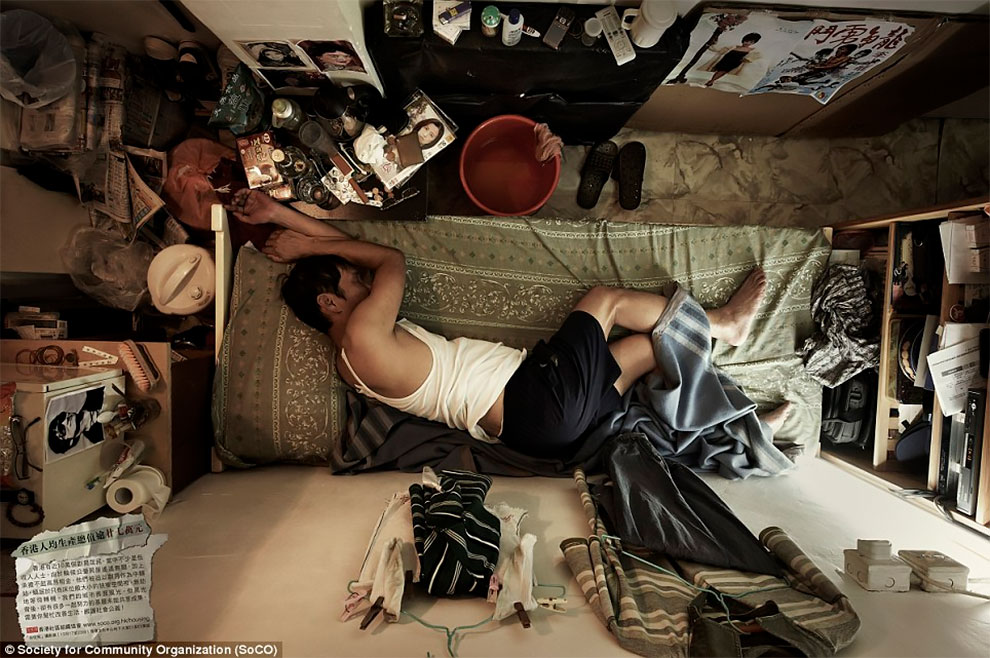 Three people have been forced to share this closet-like space because rent is so high and public housing waiting lists so long. 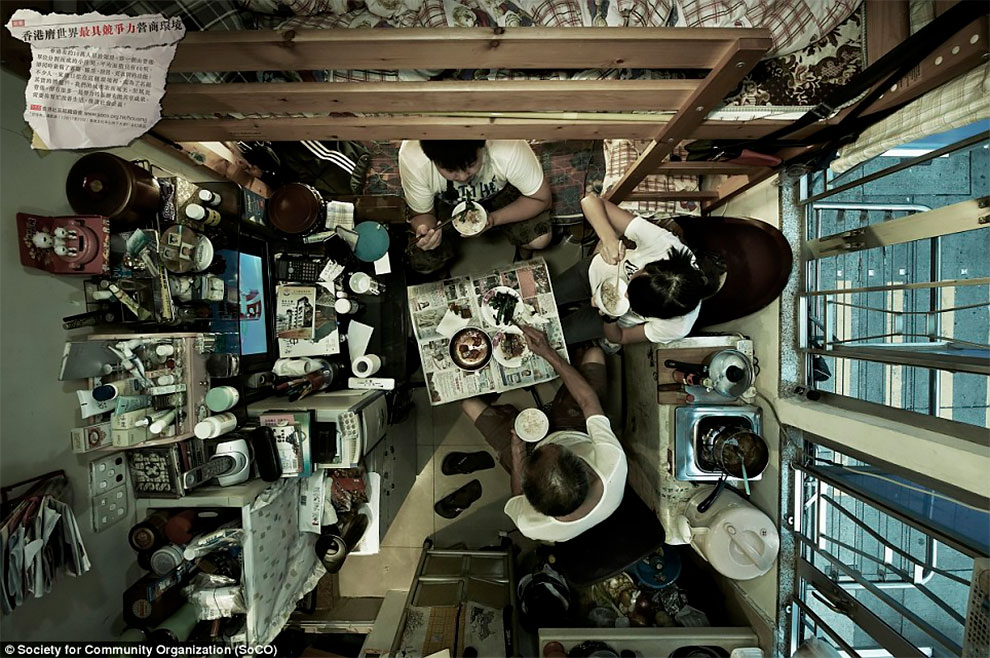 A man washes his clothes while sitting on his bed next to his ‘kitchen’. Hundreds of thousands of people still live in caged homes like this in Hong Kong. 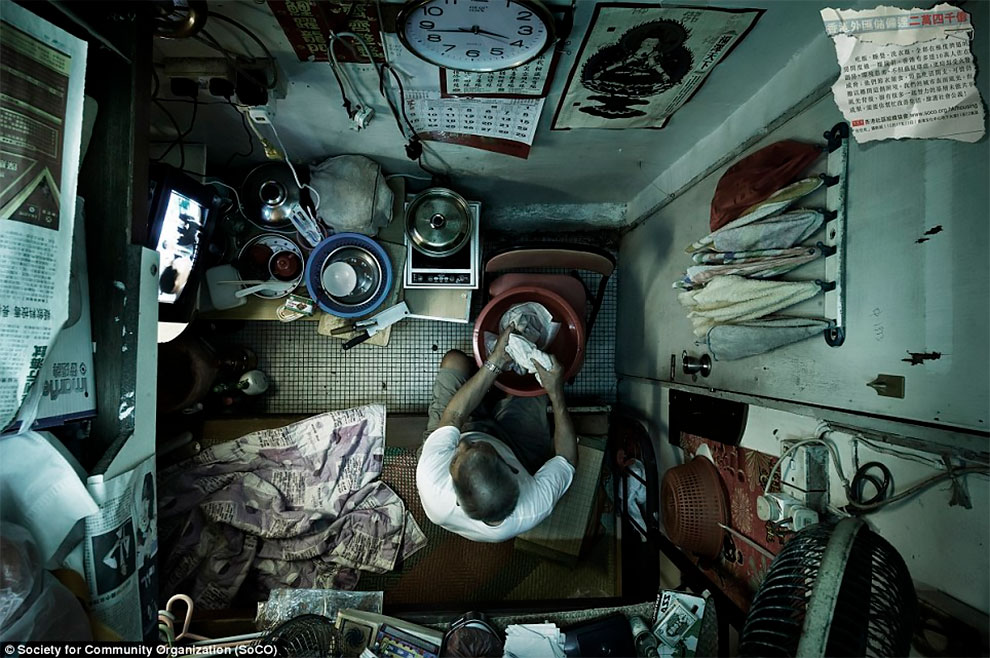 A woman sits in the only available space in her room. Campaign groups say many Hong Kong residents are being neglected by the city’s decision-makers. 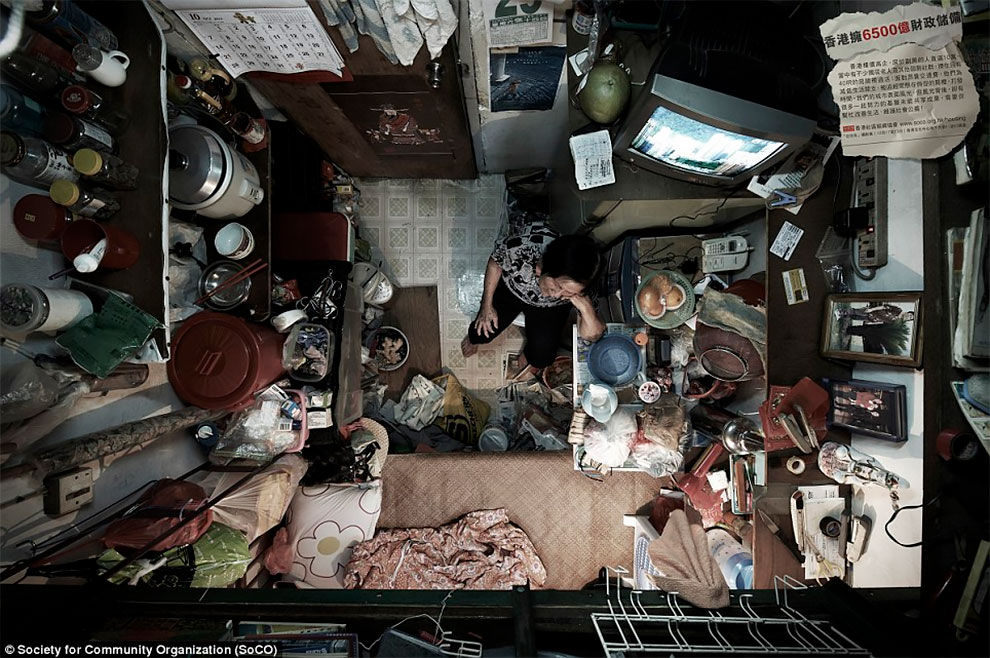 The Society for Community Organization has released these images to ‘promote respect for people’s rights and equality for all members of society’. 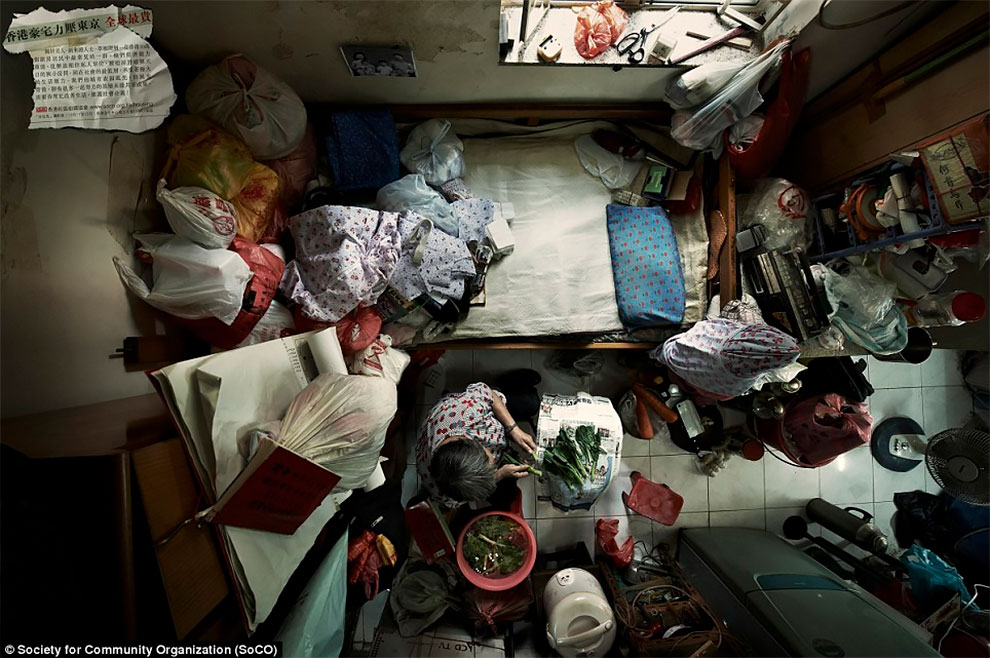 A man tucks into a takeaway as the walls of his room flake off around him. He has no proper bed to speak of. 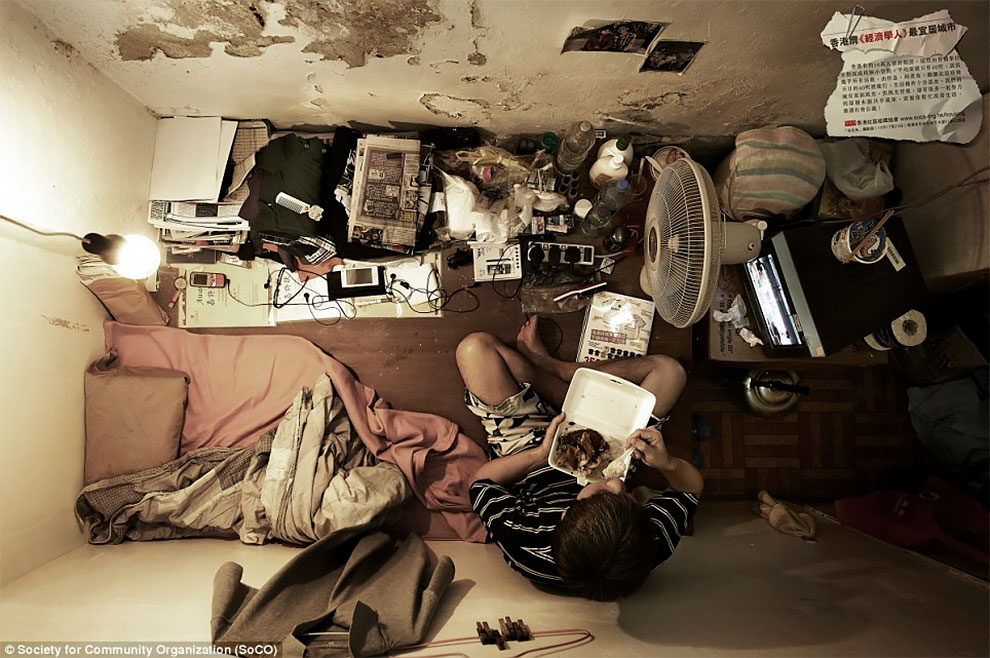 With a land mass of 1,104sq km and a population of 7 million, Hong Kong is one of the most densely populated areas in the world. 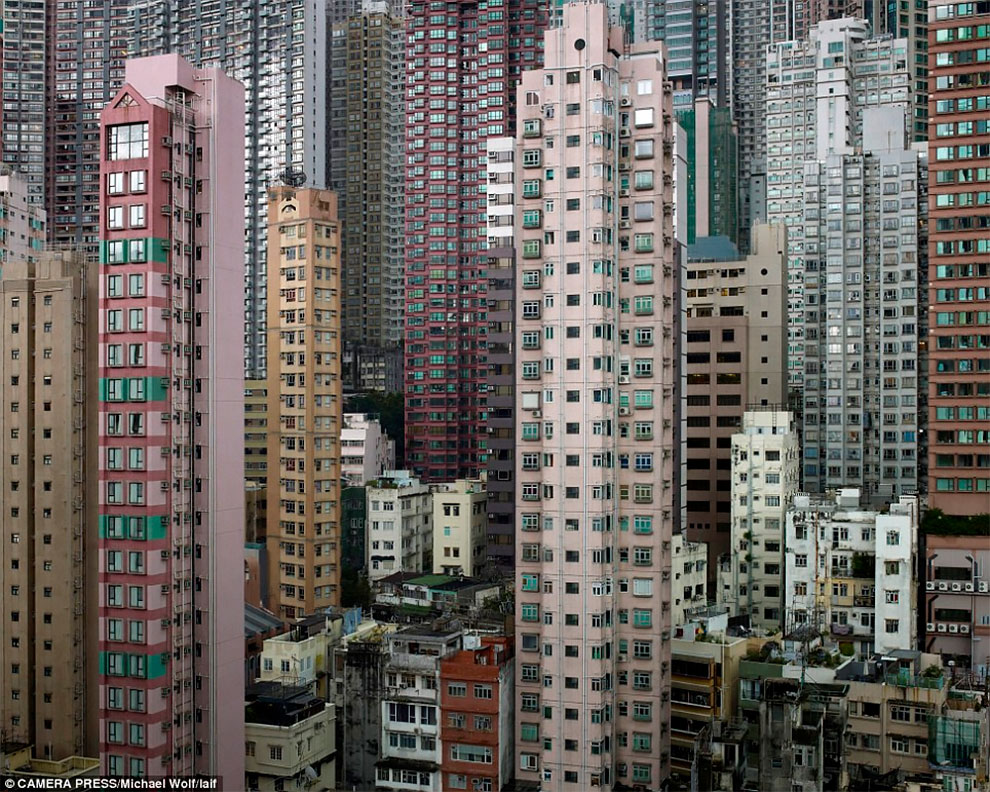 Apartments in the district of Kowloon City, where some of the aerial pictures were taken. The wealth to poverty imbalance in the city is among the world’s worst. 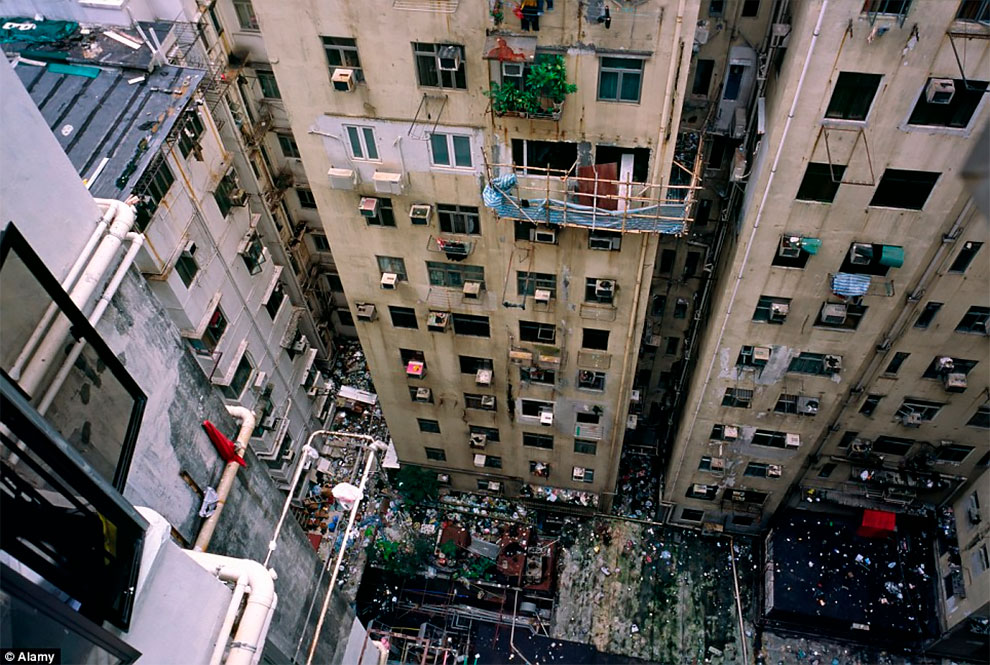