In what is no doubt a world first, the Isolation Wildlife Photography Awards was set up to showcase wildlife photos and video created during a global lockdown. The winners have now been announced, celebrating what photographers can achieve when faced with a rather unusual creative challenge.

The competition aimed to encourage keen photographers to engage with wildlife “on their doorstep,” such as in a back garden or even within the home. 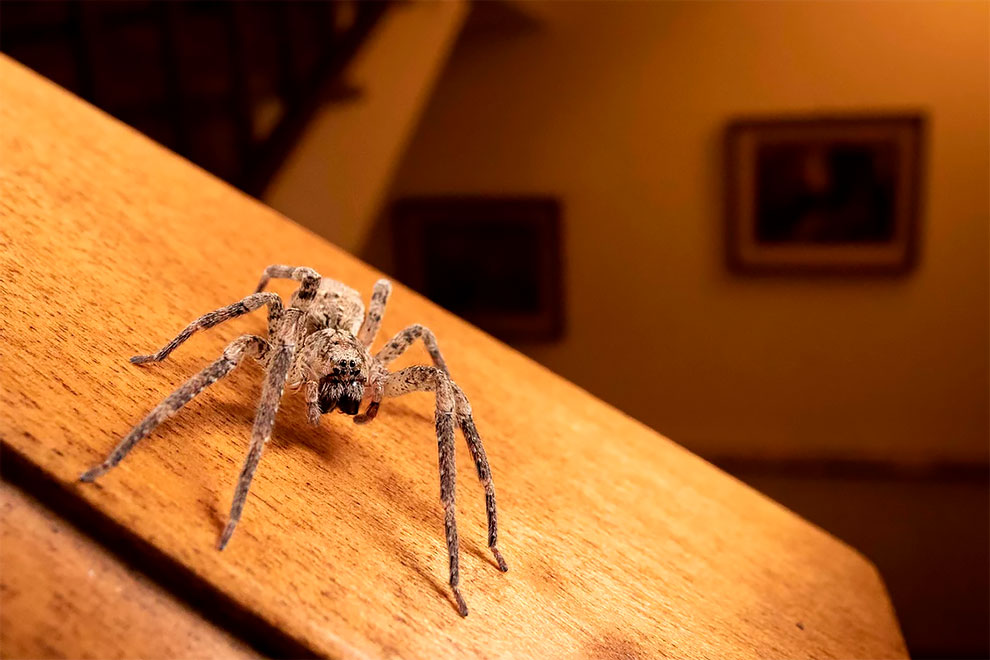 A prodigious climber and phlegmatic twilight hunter, the Zoropsis spinimana spends most of the day hidden under rocks, barks and sometimes even behind the furniture of our homes, and then starts the hunting activity at night. Unlike many other spiders, it does not weave the web but hunts in ambush, making lightning-fast sprints that leave no escape for the small invertebrates it feeds on. It is a generally shy and non-aggressive species, the bite (used only if surrounded or in the presence of offspring) has an effect similar to a bee sting. 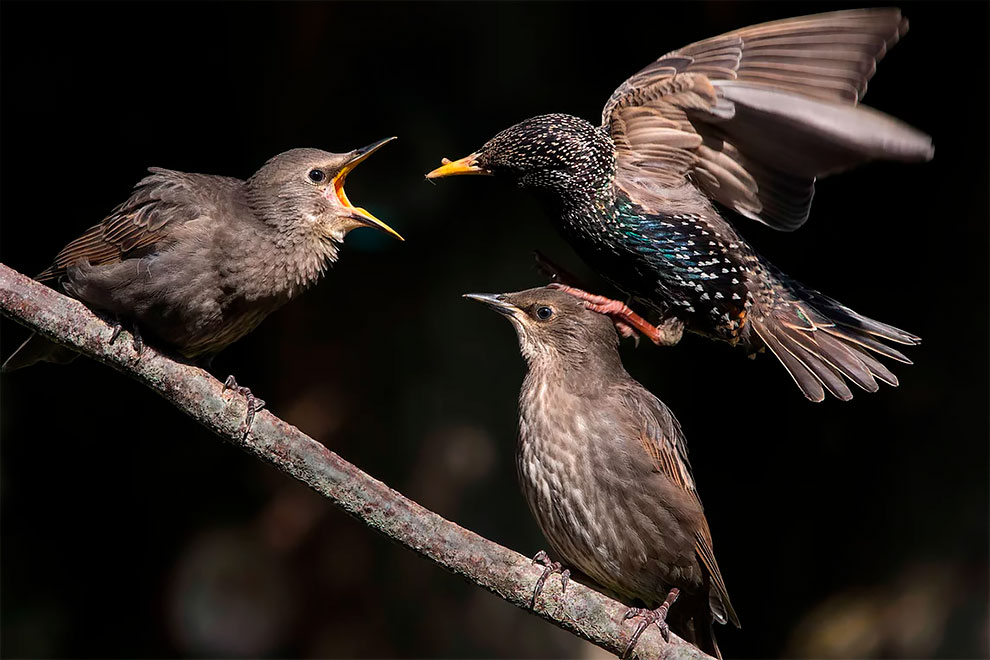 Due to the antics of the starlings who visit my garden, I haven’t suffered a dull moment during lockdown. Once they started to bring their chicks to the garden to take advantage of my all-inclusive feeders, I was determined to capture the tireless vibrancy of a doting parent responding to the shrill demands of its relatively dull looking young. With their family antics and common squabbles, it was hard not to view them anthropomorphically, and the close resemblance to the trials of family life in this image stood out; for me the main focus was the overlooked offspring, quite literally walked on for the benefit of its rival sibling. As I said, family drama. 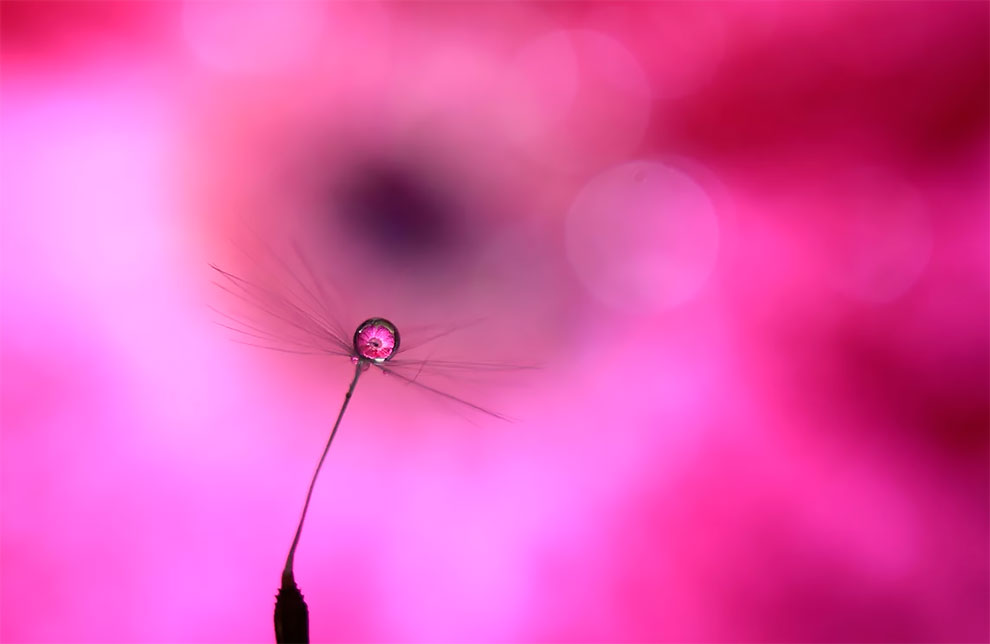 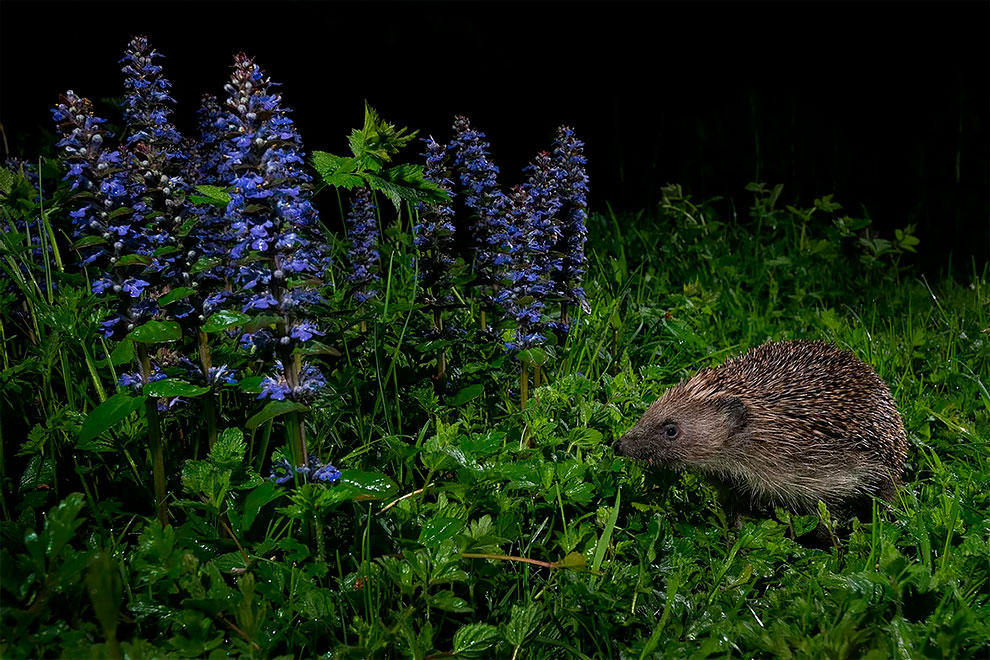 I managed to capture this image in a part of my garden where I say “No to the mow” This little hedgehog has been active all through the winter, having been seen regularly on my trail camera. I captured this shot on the second night of trying on my DSLR camera trap, using a small amount of pet food beneath the flowers as an attractant. 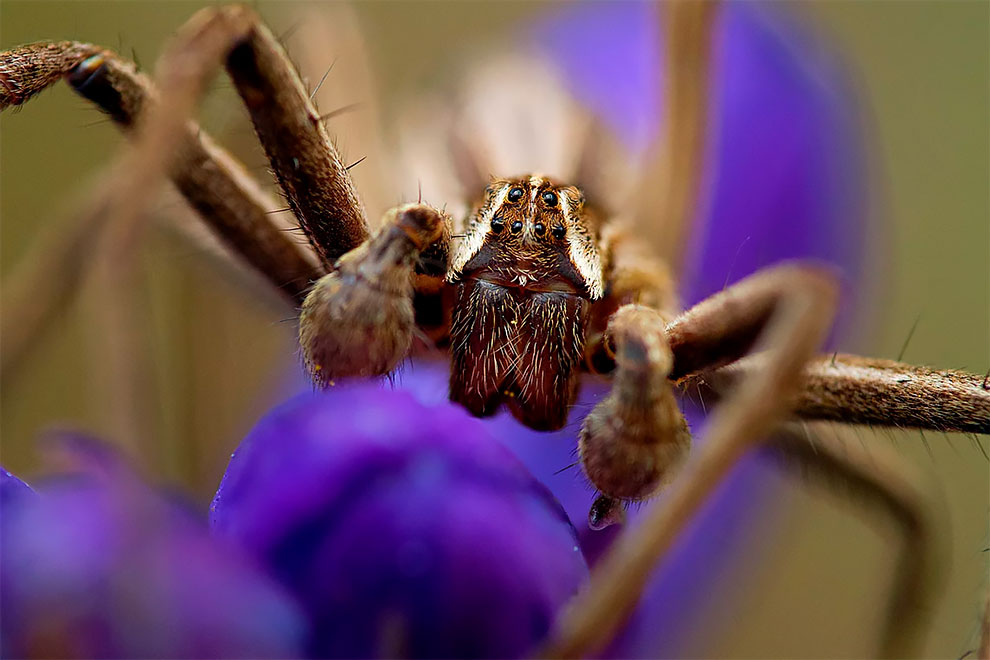 Nursery Web Spiders (Pisaura mirabilis) are fascinating inhabitants of gardens. They can sometimes be seen basking in the sunshine on the surface of leaves and flowers, which is what this individual was doing on a bluebell. This species has a fascinating element in its courtship. The male (like the one pictured), will sometimes offer a gift in the form of a neatly wrapped insect to the female before attempting to mate. This may reduce the chance of him being eaten while mating with her, as she will be occupied with the food. However, not all males get away with this! I wonder how this guy will get on? 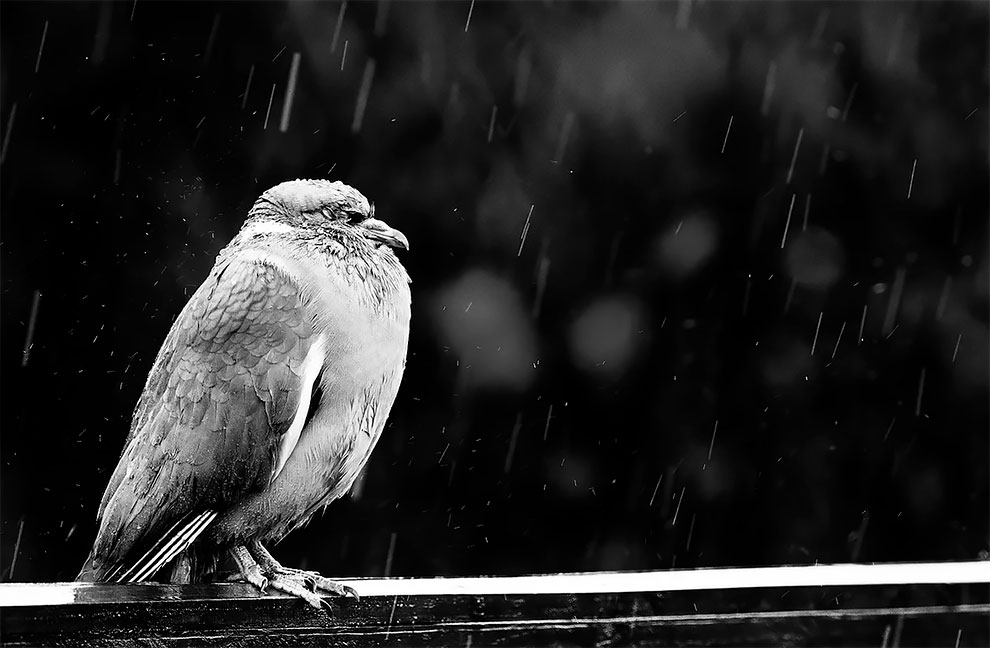 I was in the garden feeding the birds when I noticed this orb-web spider’s web. It was a very misty morning and the dew was still hanging in the web, which was hanging underneath a log feeder. I like the simplicity that black & white brings to this image. 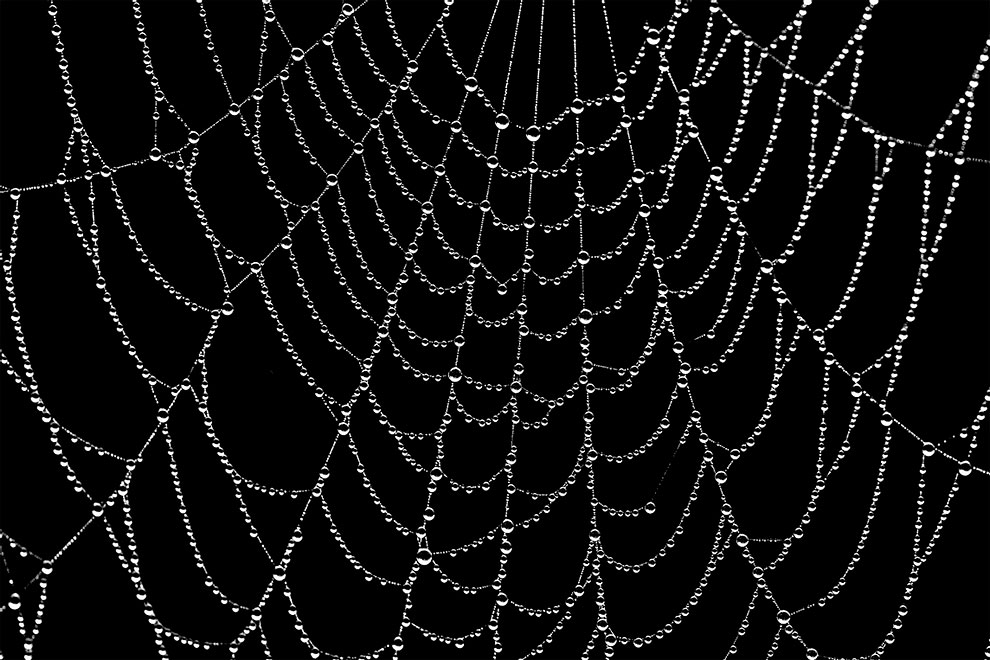 The image of a Pigeon, sitting on the garden fence, hunkered down waiting for the storm to pass, resonated with me. We were all in a similar situation under lockdown, isolated, weathering the storm, each in our own way.

Wildlife in Your Home – Runner up: House Spider – Josh Phangurha 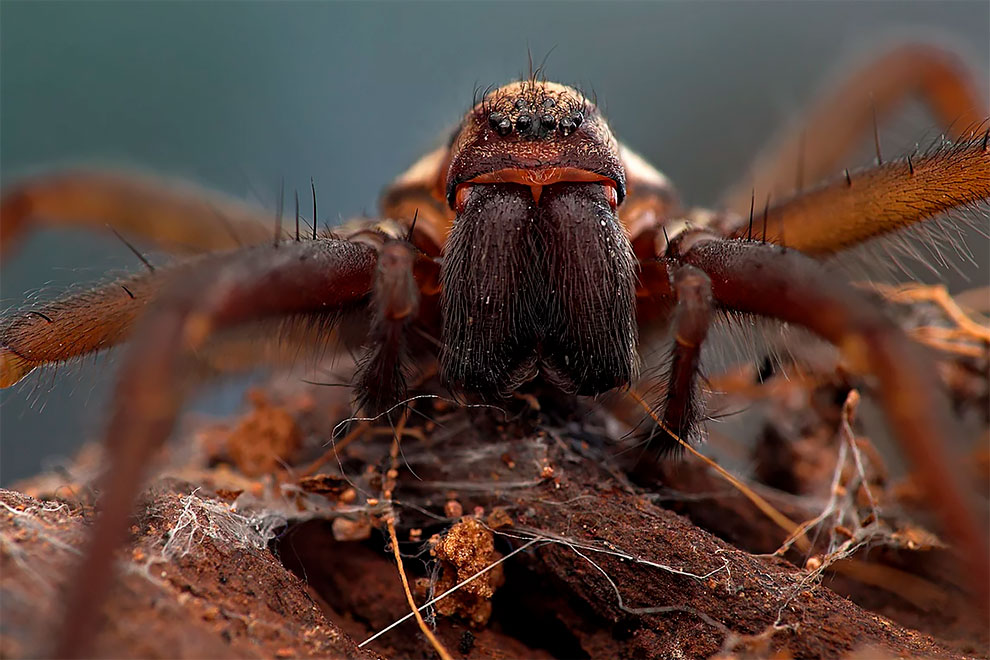 This large female house spider wandered into the bathroom one night during the first few weeks of lockdown. They make great macro subjects due to the fact that they remain very still if you do not spook them, as well as looking terrific at that sort of magnification! House spiders are probably one of the most feared creatures in the UK, but this fear is not necessary at all. They are shy creatures when discovered and do a great job of eating insects around the house. 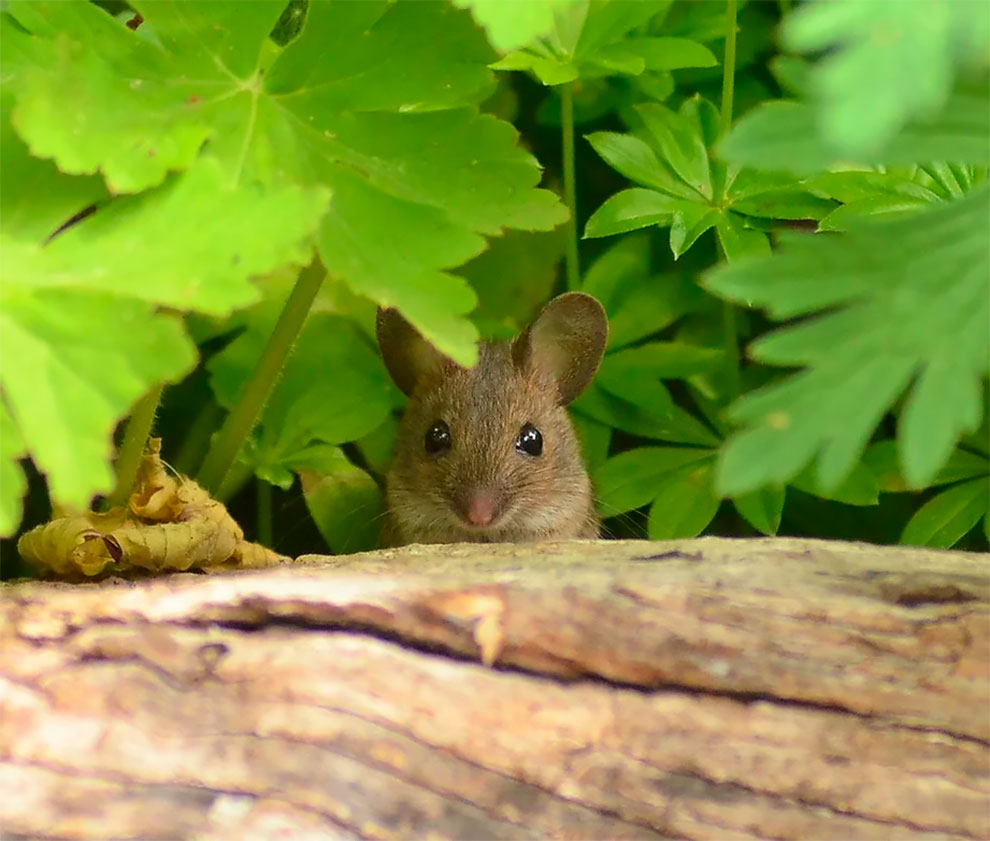 I had noticed this juvenile mouse by an old beam we use as an edge in the garden. I decided to get comfortable, stay quiet and still and sit and wait to see if it would come out again. As you can see it did! 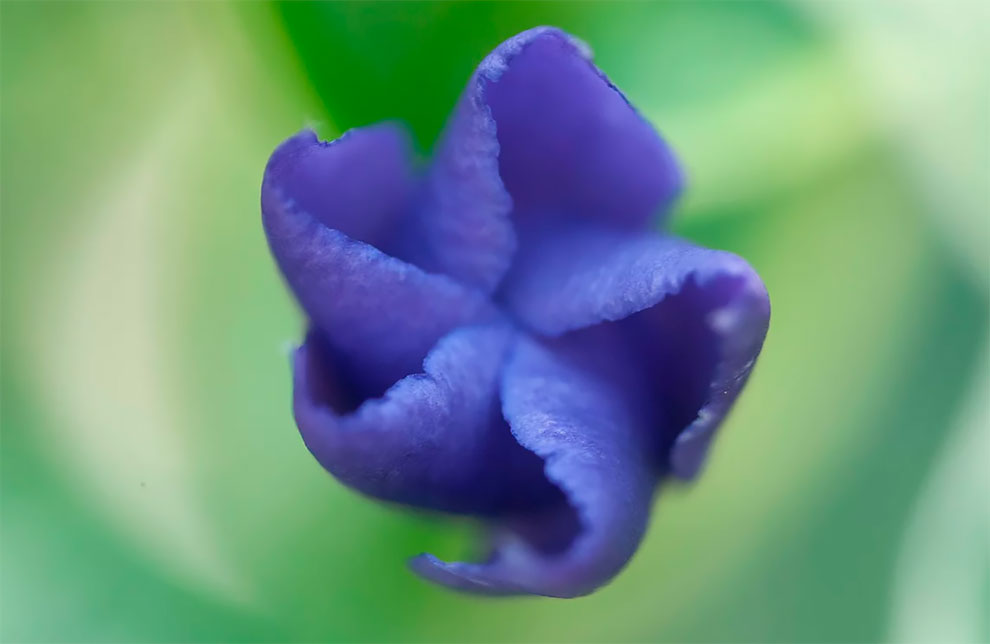 A budding periwinkle flower on the cusp of opening. Periwinkles are my favourite flower and it looked unusual and pretty.

Chinese Women Use These Swimsuits To Keep Their Skin White
Surreal Portraits Splicing Other People's Pictures
Inspiring And Glamorous Female Portrait Photography By Shibbi
A Day At Mission Beach, California, August 1970
Whimsical Photos of Everyday Objects Playfully Reimagined Through the Eyes of a Child
People’s Choice Finalists from the 2020 Wildlife Photographer of the Year Contest
Spectacular Winners Of The US Nature’s Best Photography Contest 2017
Photographer Andrius Burba Captures Stunning Photos Of Dogs From Underneath
These Photos Perfectly Capture The Beauty Of People With Albinism
Photo of the Day: Atomic Skyline
These Are The Spectacular Winning Photos In The 2017 Best Aerial Photography Contest
Fantastic Nightscapes Of Finland By Mika Suutari
Stunning Winning Panoramic Photography From The 2018 Epson Panoramic Awards
Giant Eyeball Found on the Beach
Historical Photos Of The 1918 Spanish Flu That Show What A Global Pandemic Looked Like In The 1910s
"Secret Window, Secret Garden": Dreamlike Photography By Shaina Sterrett
The Meditative Beauty Of Nighttime In Dreamy Photographs By Neil Kryszak
Amazing Portraits Of Louis Coulon And His 11-Foot Beard As A Nest For His Cats
Photographer Andreas Levers Captures The Hazy Glow Of Unpopulated Streets At Night
Photographer Takes Funny Pictures Of Herself And Her Dog In Silly Costumes
A Lot of Penguins
Rare Photos That Captured Incredible Moments from History
The Last Portrait Of Boxing Legend Muhammad Ali Showing The Destructive Effects Of Parkinson’s Disease
A Photographer Is Using A Unique Method To Show The Shift From Day To Night Across Famous Cities In Spectacular Images
contest, lockdown, wildlife, winners