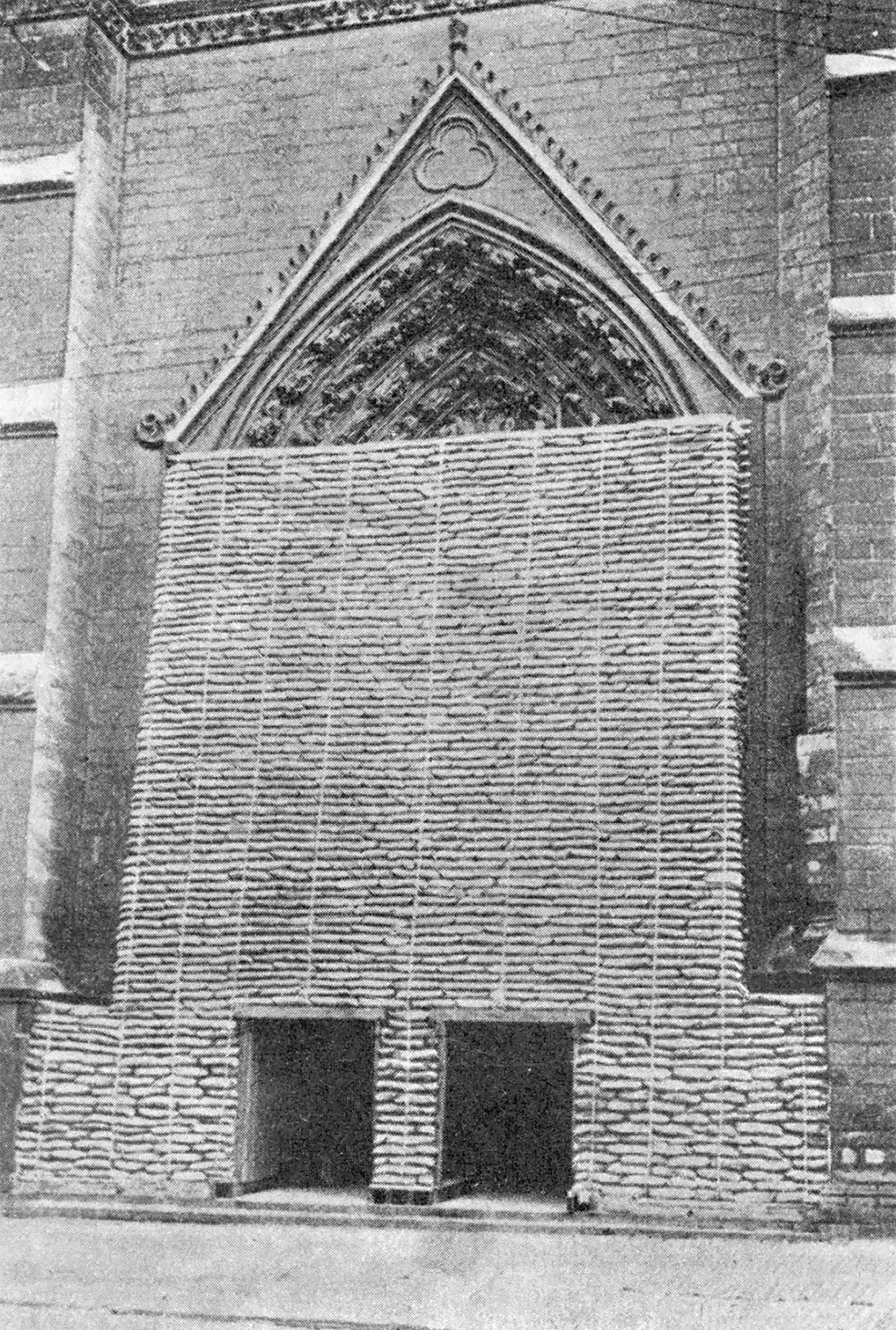 Notre-Dame de Paris (meaning “Our Lady of Paris”), referred to simply as Notre-Dame, is a medieval Catholic cathedral in the 4th arrondissement of Paris. The cathedral was consecrated to the Virgin Mary and considered to be one of the finest examples of French Gothic architecture. 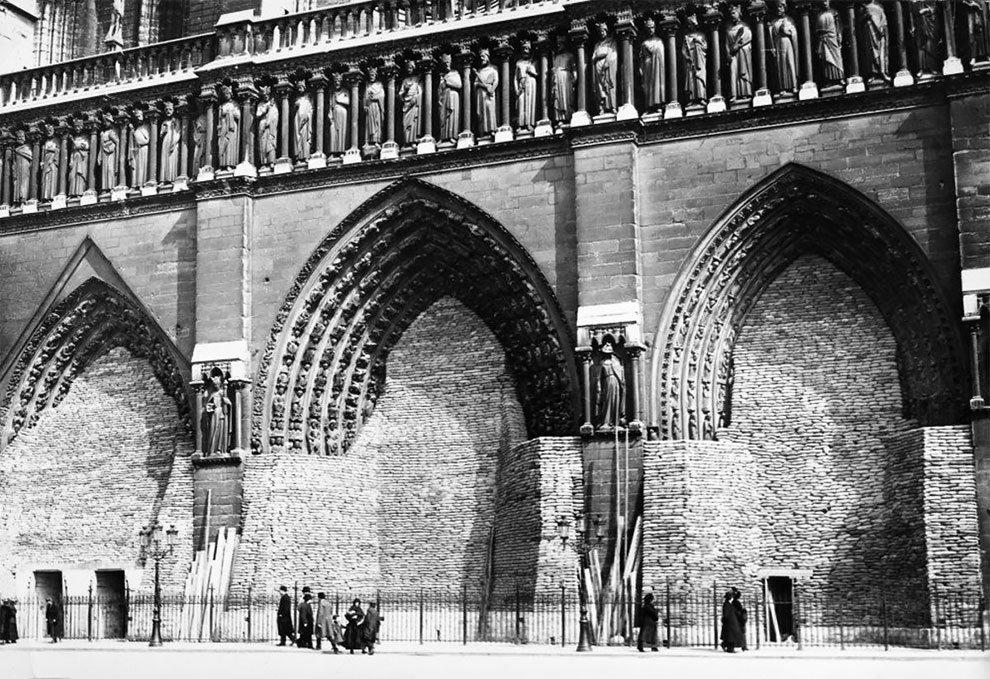 Its pioneering use of the rib vault and flying buttress, its enormous and colorful rose windows, as well as the naturalism and abundance of its sculptural decoration set it apart from the earlier Romanesque style. Major components that make Notre Dame stand out include one of the world’s largest organs and its immense church bells. 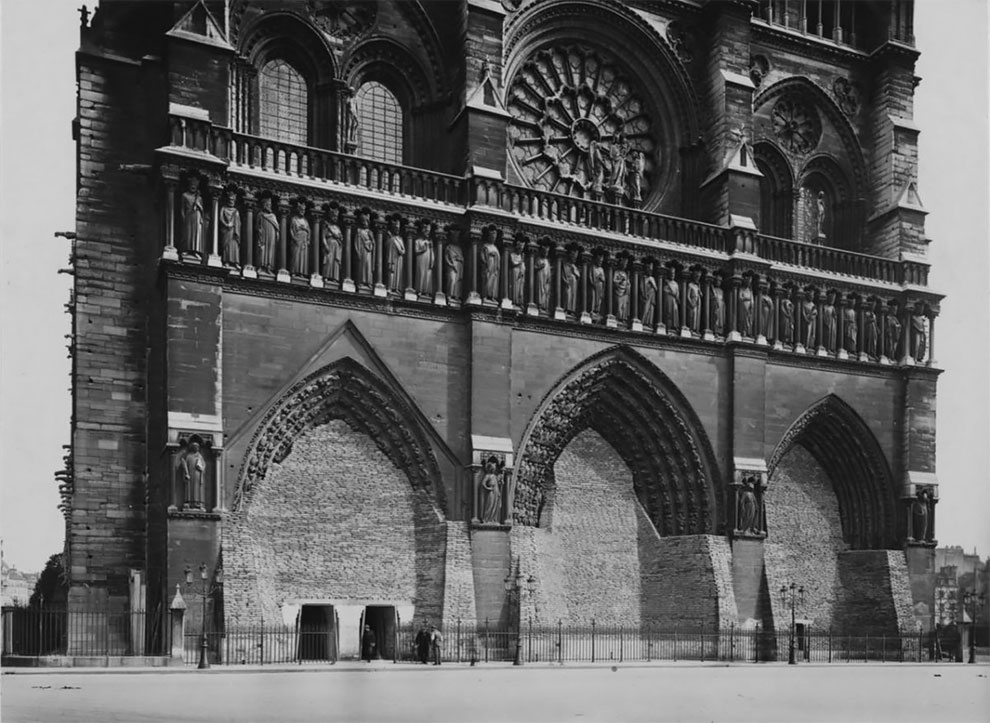 The cathedral’s construction began in 1160 under Bishop Maurice de Sully and was largely complete by 1260, though it was modified frequently in the following centuries. In the 1790s, Notre-Dame suffered desecration during the French Revolution; much of its religious imagery was damaged or destroyed. In the 19th century, the cathedral was the site of the coronation of Napoleon I and the funerals of many Presidents of the French Republic. 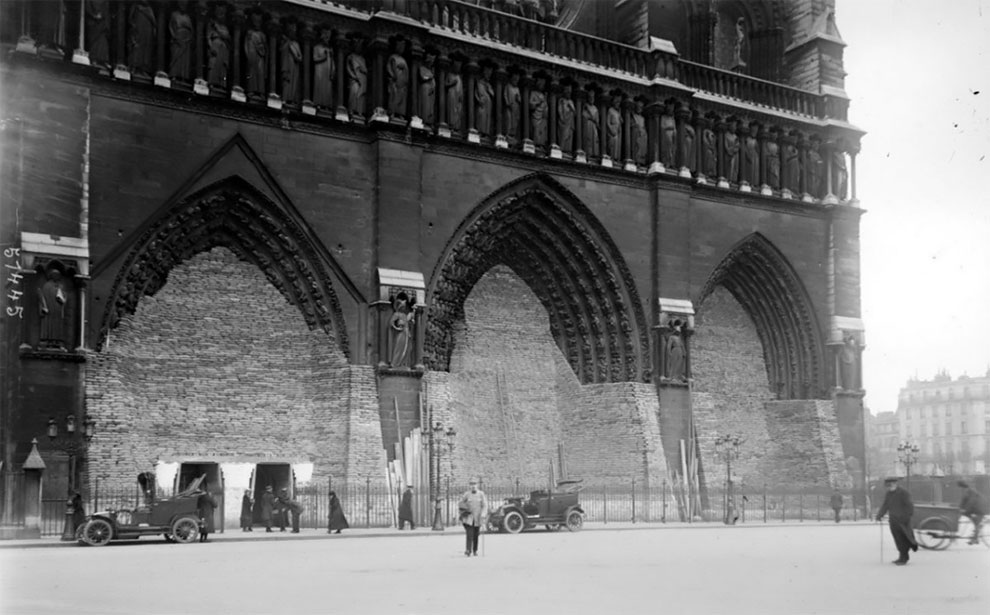 The cathedral was damaged during the First World War. In 1914 more than two dozen German shells hit the cathedral and the wooden scaffolding was set on fire, which in turn lit the oak of the roof. The lead used to seal the roof melted, which in turn set the wooden pews on fire. Stained glass windows and pillars and statuary were destroyed. 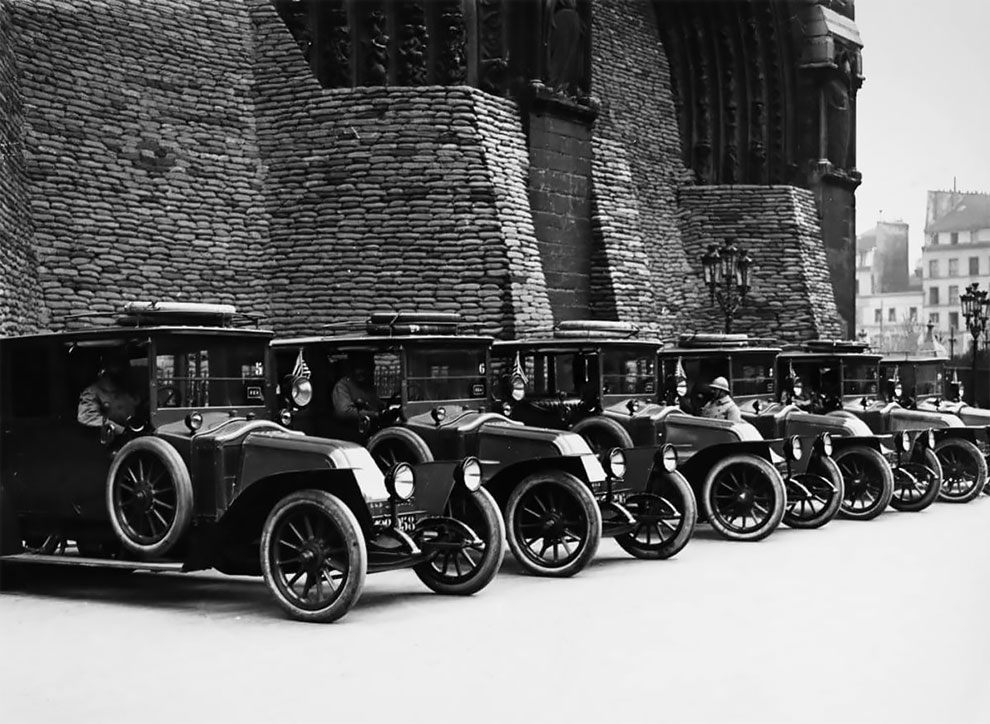 These vintage photographs show sandbags were stacked up against Notre Dame Cathedral to try and prevent the war damage. 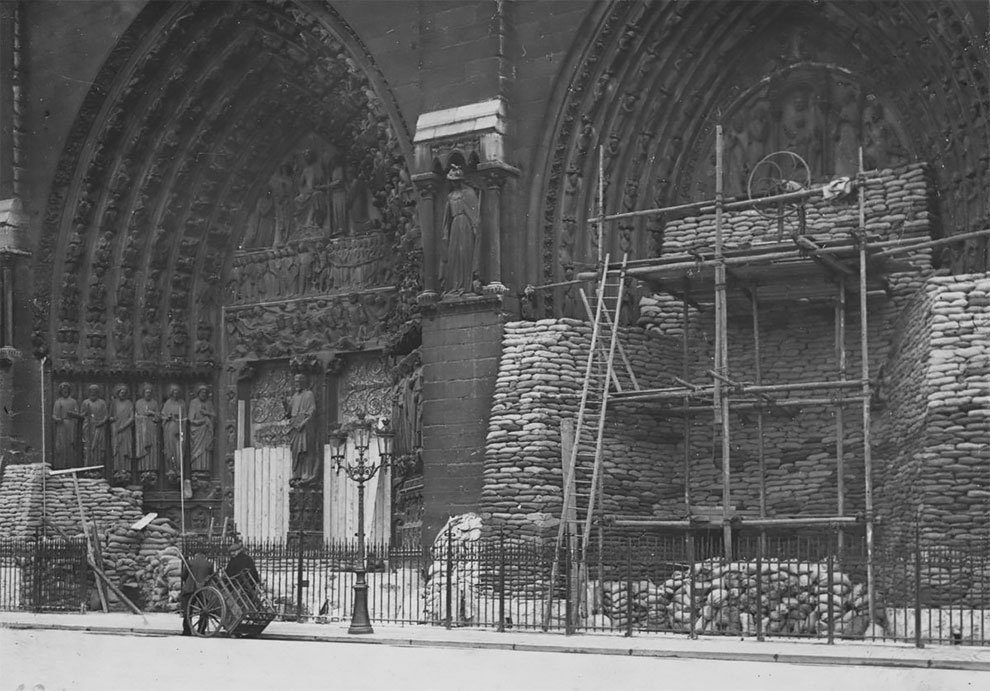 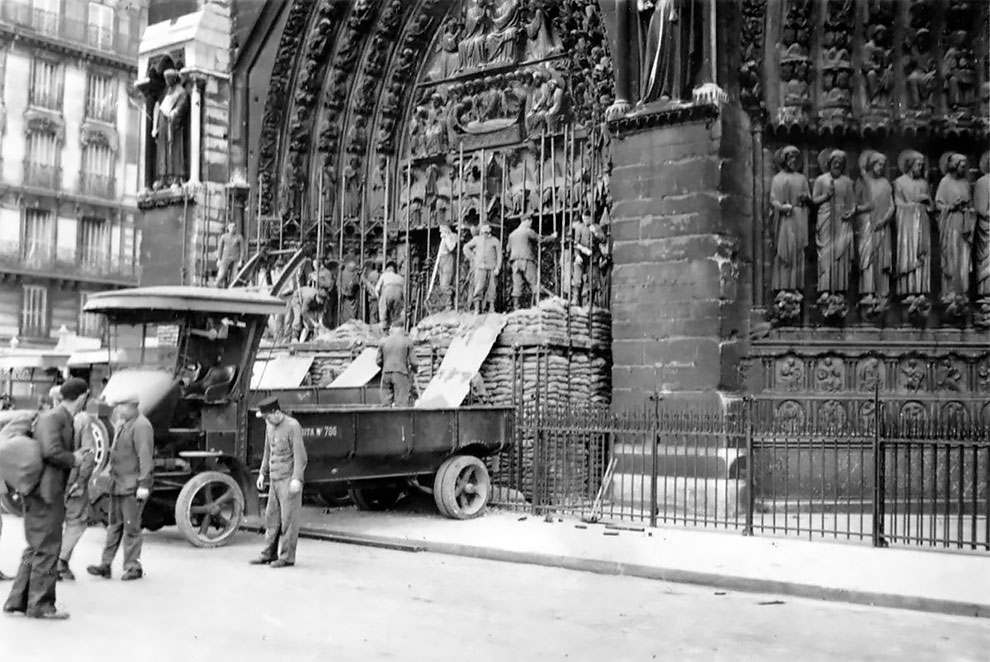 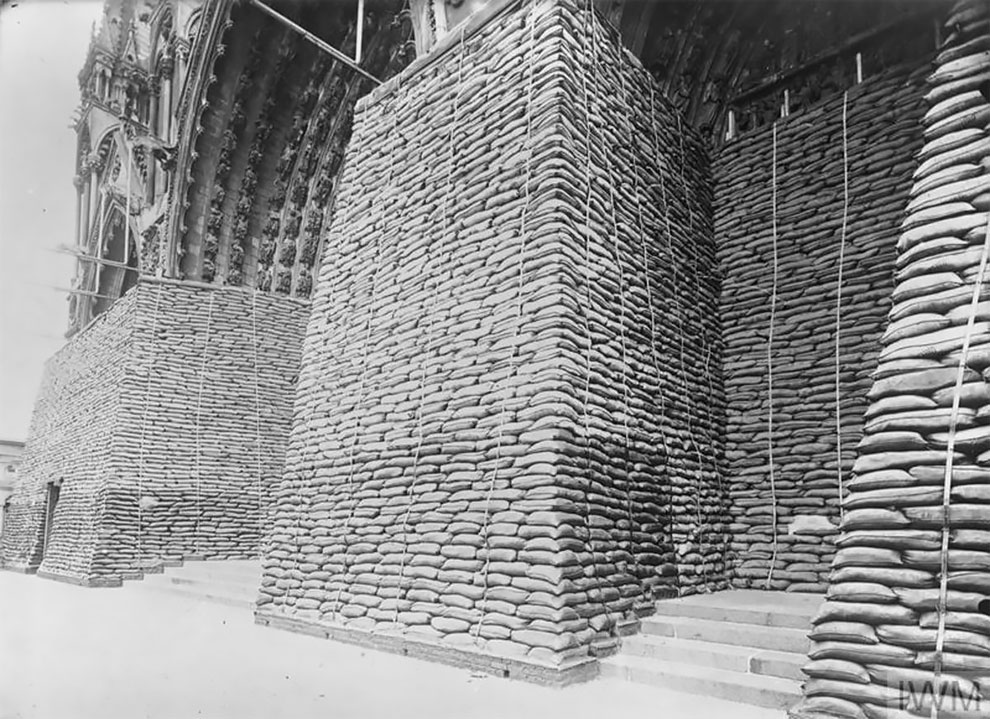 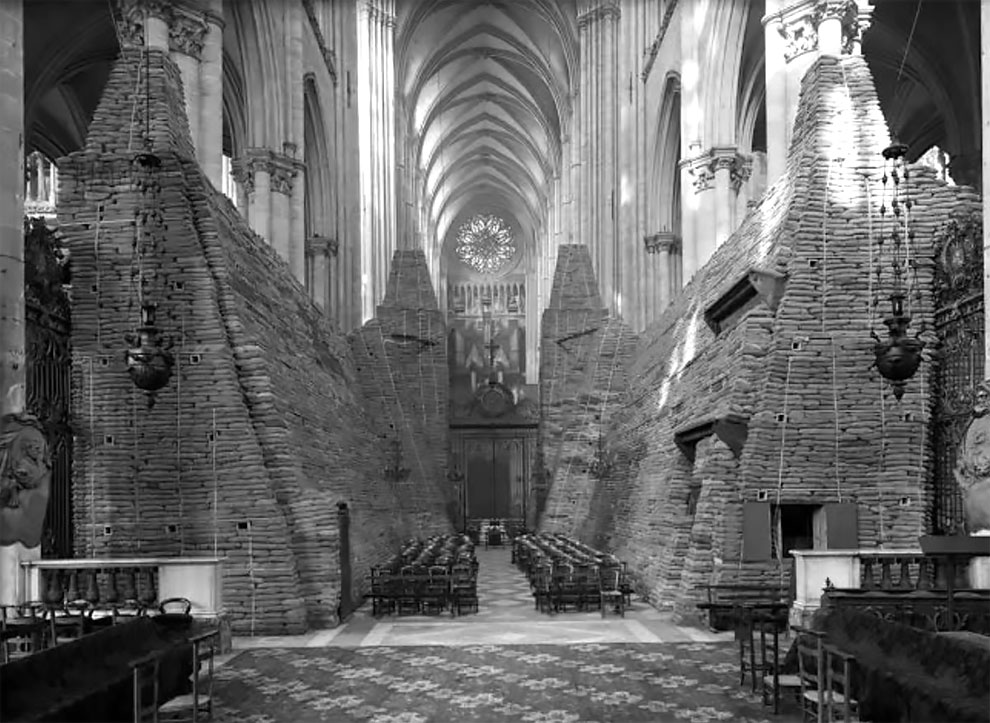 Secluded Timber Cabin on Stilts is a Creative Escape for Writers
This Building Uses Emoji Cast In Concrete As Modern Gargoyles
Vittra Telefonplan School in Stockholm
New Amazon Warehouse Facility in Tijuana Slum
Surreal Architectural Collages By Beomsik Won
The Image of an Orthodox Church in a Modern Architectural Solution
How To Go All Out For Halloween Without Decorating Your House
Shakhti 360 Leti: Luxury Hotel in Himalayas
Euro 2012: England Fans to Get Only 5,000 Tickets for Quarter, Semi-Finals
Slinningsbålet: The Battle For The Biggest Bonfire In The World
Extraordinary Design Shelter That Looks Like A 'Flintstones House', And No One Wants To Buy It
LEGO Architecture Studio
Impressive Examples of Soviet Brutalism in Architecture
Giant Swings To Abolish The Wall Between The United States And Mexico: Take That, Donald Trump!
This 200-Year-Old Unremarkable House Will Surely Surprise You
Tiger and Turtle
Indoor Pool at the Hotel Catell dels Hams
These Houses Are Designed In The Shape Of Famous Logos
Real Size Replica Of The Noah's Ark Opens At Kentucky Theme Park
New York Secret Rooftop World
Living On The Edge Of The Icelandic Cliffside Retreat
Explorer Matthias Haker Discovers Crumbling Churches, Overgrown Synagogues and Golden Chapels
Nemo 33: World’s Deepest Swimming Pool
An Incredible Design Of Space Age German Lifeguard Station
Klein Bottle House By McBride Charles Ryan
A Sculptural Arch Of Mist Has Been Installed In Japan
Charing and Relaxing At SPACE IN PAUSE With Veliz Architecto
"Reforming The Built Environment": Architecture Photo Collages By Michael Jantzen
Manipulated Photography by Victor Enrich of a Munich Hotel
Tiny Church On A Tiny Island In Russia Gets More And More Beautiful Each Season
cathedral, Notre Dame, protection, sandbags, WWI