This Bulldog Loves Watching The Street Through A Hole, So His Owners Paint 2 Costumes On The Fence 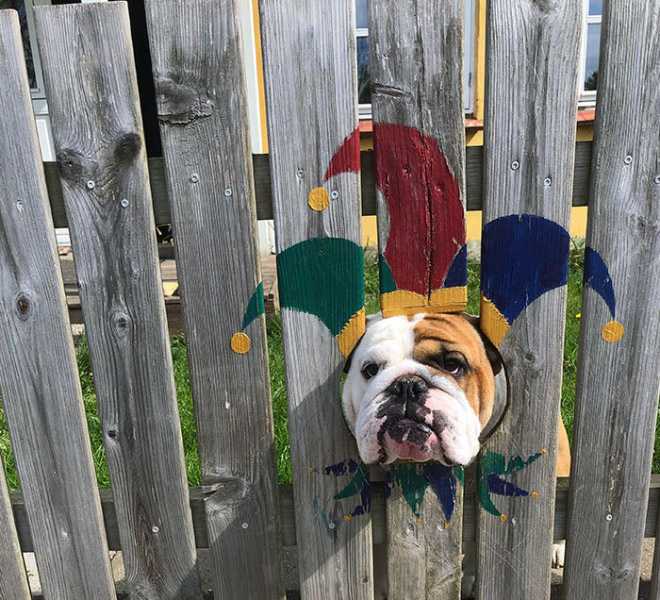 The handsome 4-year-old English Bulldog comes from Gråsten, Denmark and his name is Bogart. Bogart’s owner, Ranveig Bjørklid Levinsen, decided to brighten everyone’s mood during the Coronavirus pandemic, and came up with a brilliant idea to paint costumes on the fence for her dog. 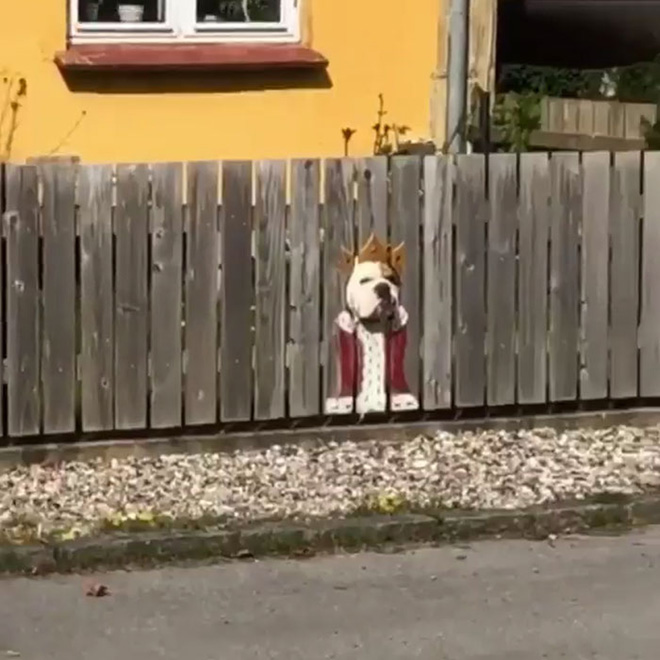 Well… actually she has two dogs: Winston and Bogart. Winston is actually Bogart’s mother (she doesn’t care about the male name). So the fence accordingly has two holes and two costumes, so they can peek out of them simultaneously.

“We are living close to a walking path, so many people pass by every day, and the dogs are just so curious,” the owner explained. “To prevent them from skipping the fence, we made the holes, but even if it was funny to see them from the other side, I just thought it would look even funnier if we painted something,” she revealed how the paintings appeared on the fence. 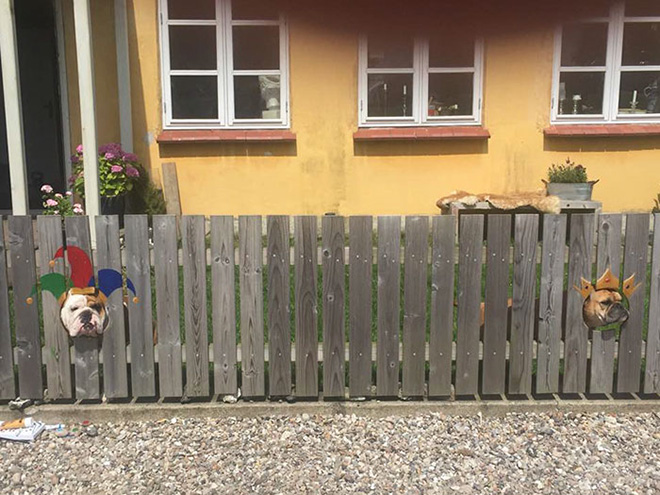 “You know, like in amusement parks where you can have your photo taken in these kind of holes,” Levinsen elaborated on where she got the idea from. The woman settled on a crown and a jester hat. Although it was Ranveig who came up with the idea, the actual paintings were done by her daughter. 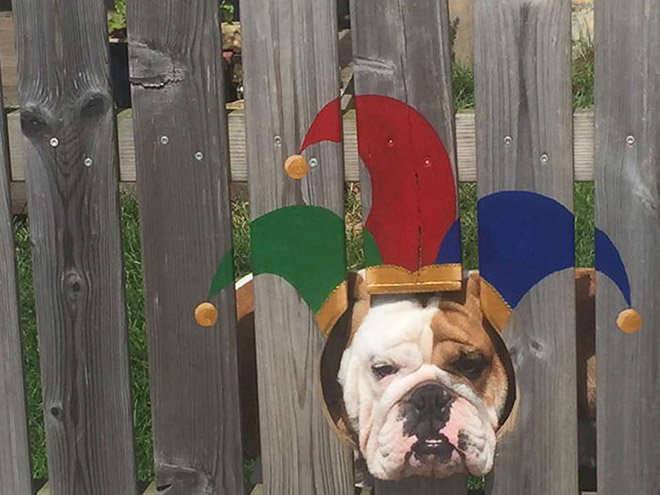 When asked about the reaction from the people, Levinsen said that it’s been overwhelming. She also added that complete strangers reach out to her to tell that they think her dog and the fence painting are hilarious. “I, myself, am blown away that my little dog has gone viral – just because he looks goofy,” she concluded. 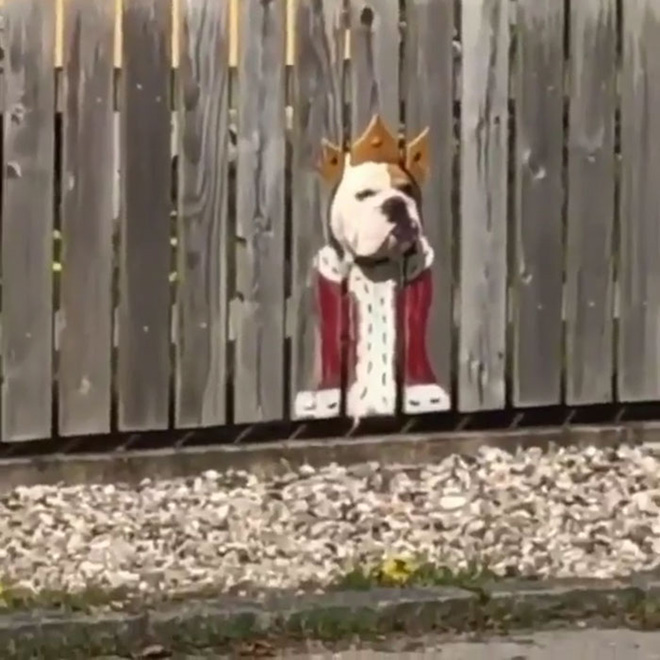 Naughty Cat Remains Completely Unbothered After Breaking A 2,432-Piece Doraemon Figure Its Owner Spent A Week Building
Two Pet Lovers Had Rescue Kittens At Their Wedding And The Photos Are Adorable
This Pet Dentist From Alaska Conquered The Internet With His Indescribably Cute Dogs
75 Honest Out Of Context WikiHow Captions You’ll Feel Guilty For Laughing At
Panda-suited Pickers
Why Paint Cats: The Ethics Of Feline Aesthetics
80-Year-Old Man Builds A Dog Train To Take Rescued Stray Dogs On Adventures
Moose Comes to Work
"Marty In The Movie": Artist Created Hilarious Edits Of Himself In Iconic Movies
Bizarre, Provocative And Imaginative Collages By Naro Pinosa
Meet Sygmond, The Beautiful Gray Cat Of Your Nightmares
Artist Creates Surreal Photo Manipulations Using Animals, Plants, People, And Objects
Funny And Twisted Cartoons by Ben Chen
Woman Parodies Perfect Instagram Travel Photos With Hilariously Unphotogenic Selfies
Artist Creates Punny Illustrations To Brighten Your Day
Meet the Kitten with No Name Who is Purrrmanently Sad
This Instagram Account Creates Sinister Parodies of Kid’s Cooks To Ruin Your Childhood Memories
Humorous Comic Fat Lady Postcards by Donald McGill From the Early 20th Century
Artist Perfectly Illustrates The Social Issues Of 2020
'3D Printed' Animals Illustrate The Irreplaceable Nature Of Endangered Species
Artist Shows The ‘Unseen’ Side Of Popular Characters And People Are Saying It Looks Just Wrong
A Series Of Photos Show The Frogs Hitched A Lift On A Passing Crocodile
Big Feelings: How to Be Okay When Things Are Not Okay by Liz Fosslien
Dogs Ease Namibia's Cheetah-farmer Conflicts
bulldog, costume, humor

Super Fun Shark Bed for Your Pets
2015 World's Ugliest Dog Contest
Photographer Photoshops Her Dogs All Around The World So They Can ‘Travel’ During This Quarantine
Hard-Working Sausage Dog Takes On A Part-Time Job As A Mechanic
Artist Cathy Lam Draws The Everyday Lives of the Cuddly Cats
Goat Put In Tiger Enclosure As Lunch, Steals Tiger’s Bed And Becomes Boss
Sculpture Of Istanbul’s Social Media Phenomenon Cat Tombili To Be Inaugurated
Scared Of Coronavirus, Chinese People Have Started Putting Masks On Their Pets
2022 Dog Shaming Calendar Is Here!
Edible Anus Company Makes Chocolate Buttholes, And People Are Actually Buying Them
2007 ‒ 2023 by Design You Trust. Proudly hosted by WebHostingBuzz.
Privacy Policy · Terms of Service · Content Removal Policy ❤️ 🇺🇦