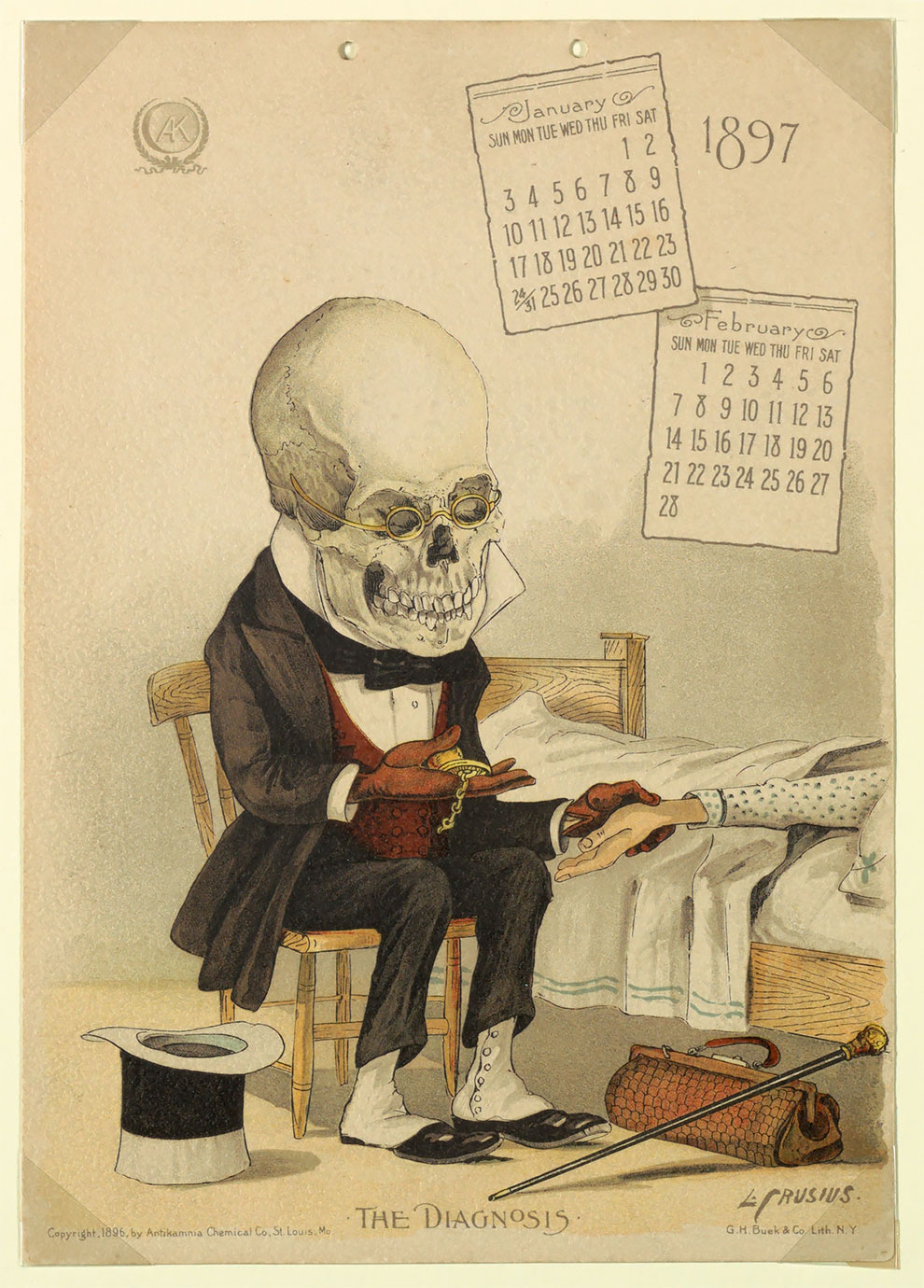 Using memento mori to sell medical treatments designed to hold off death was the idea of the Antikamnia Chemical Company, which featured skeletons employed in various professions in adverts for its drugs. 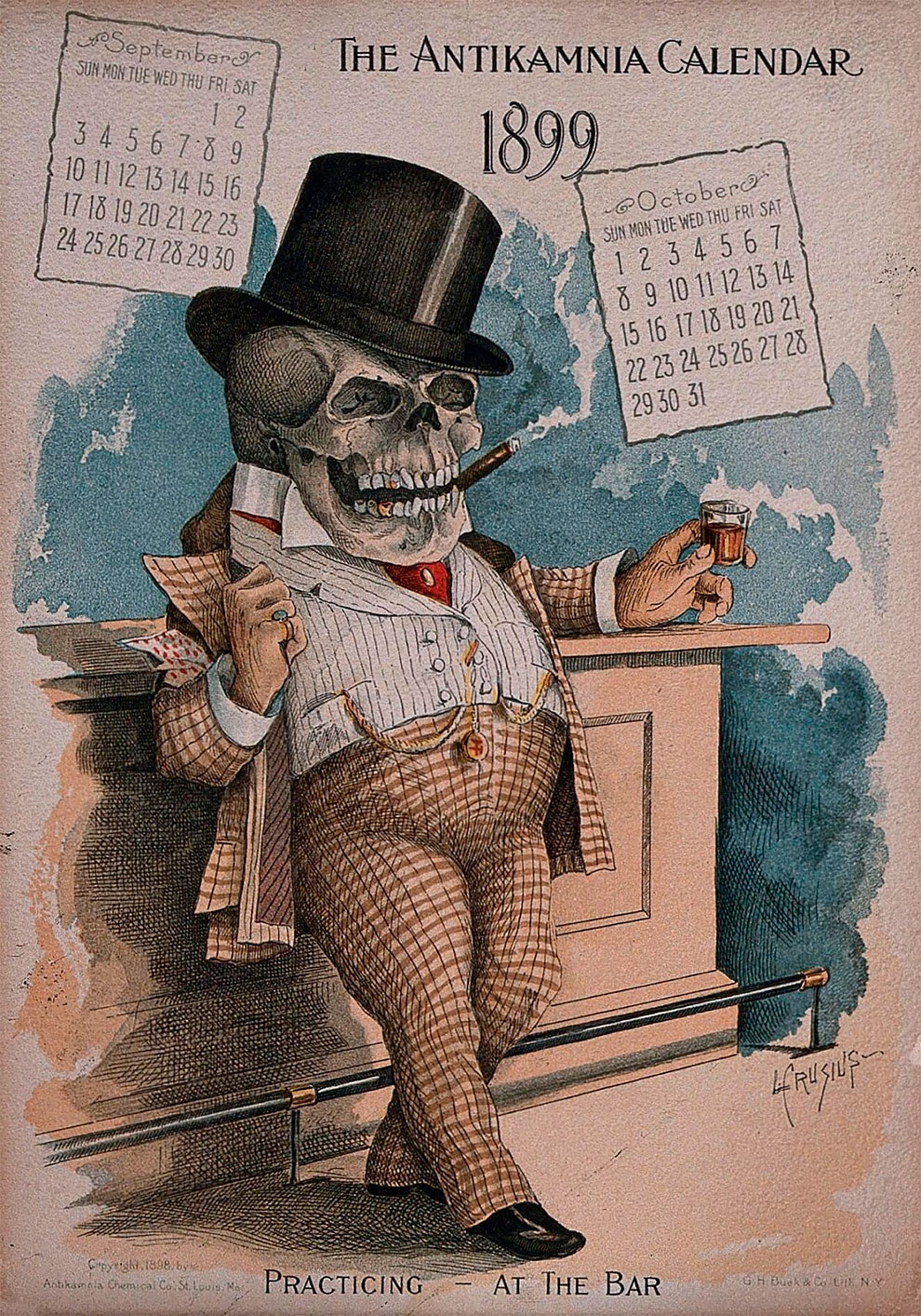 The illustrations, watercolour “skeleton sketches”, were created by Louis Crusius (1862-1898), a doctor and artist based in the city. 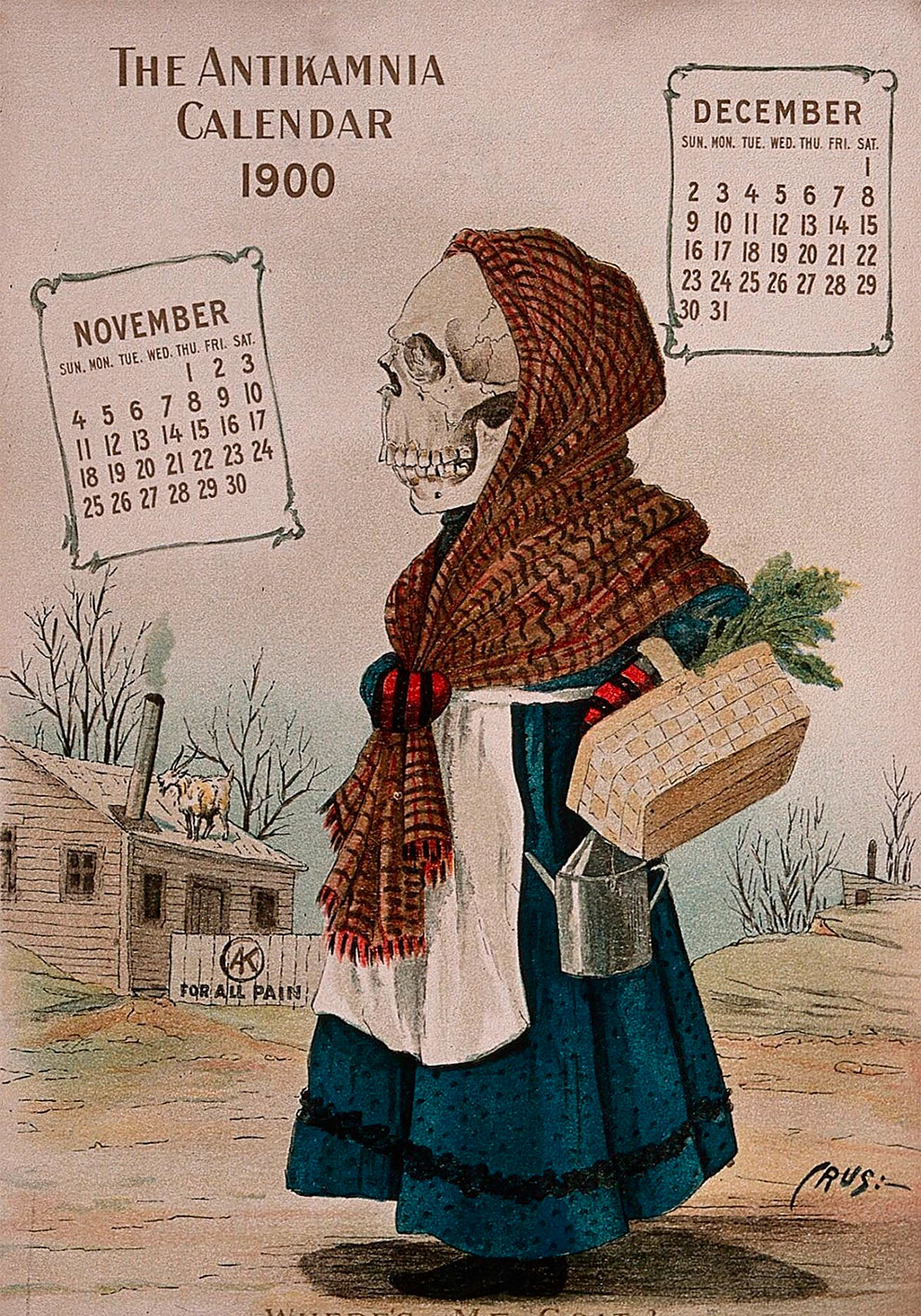 As the skeletons advised, the pills were a “certain remedy, unattended by any danger”. Pop enough of them and you’d be free of worries and pain, because you’d be dead. They contained acetanilide, a synthetic organic compound introduced in therapy in 1886 as a fever-reducing drug. However, excessive or prolonged use damaged the function of haemoglobin, the oxygen-carrying pigment of the blood, possibly leading to cyanosis, when your skin or lips turn a bluish-purple hue. 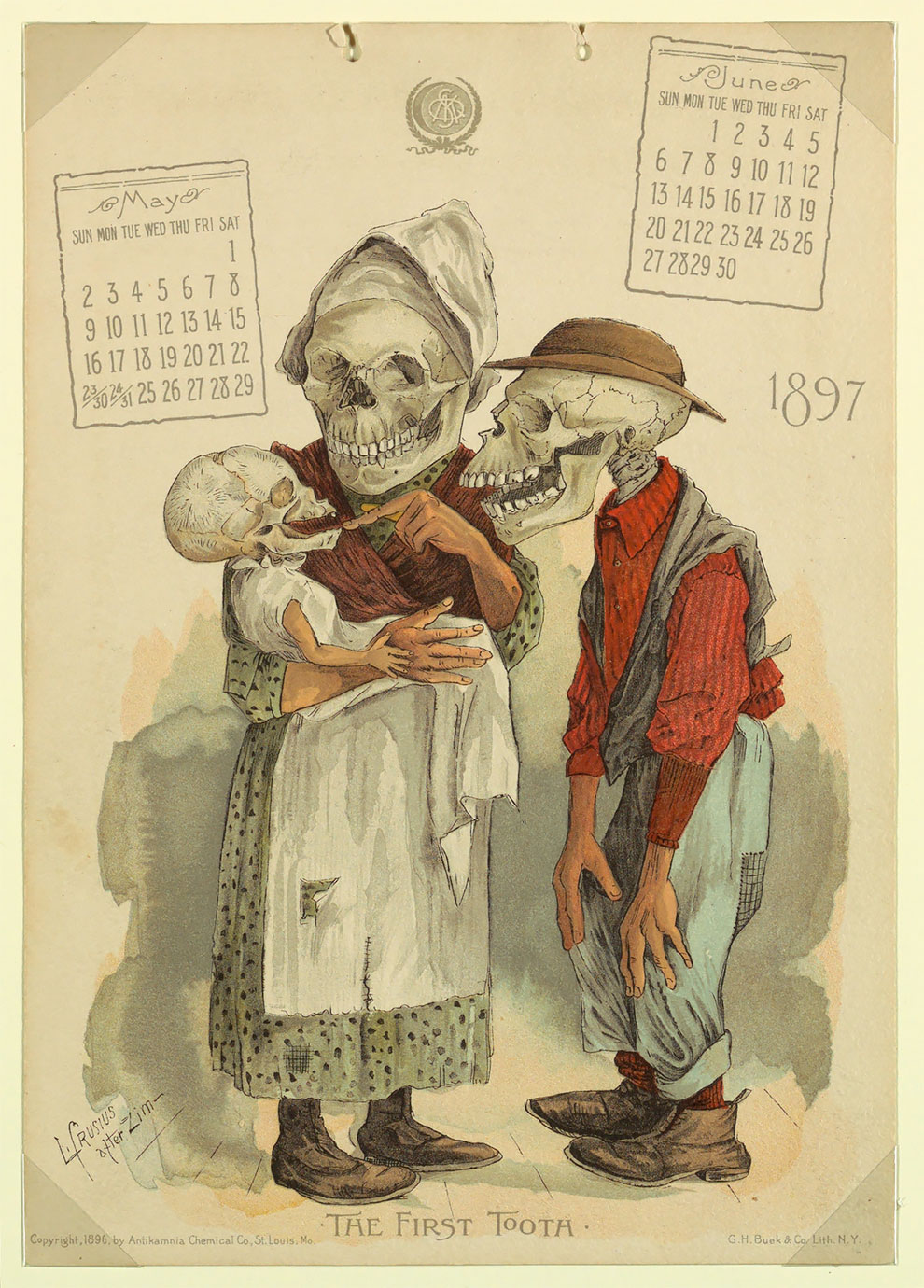 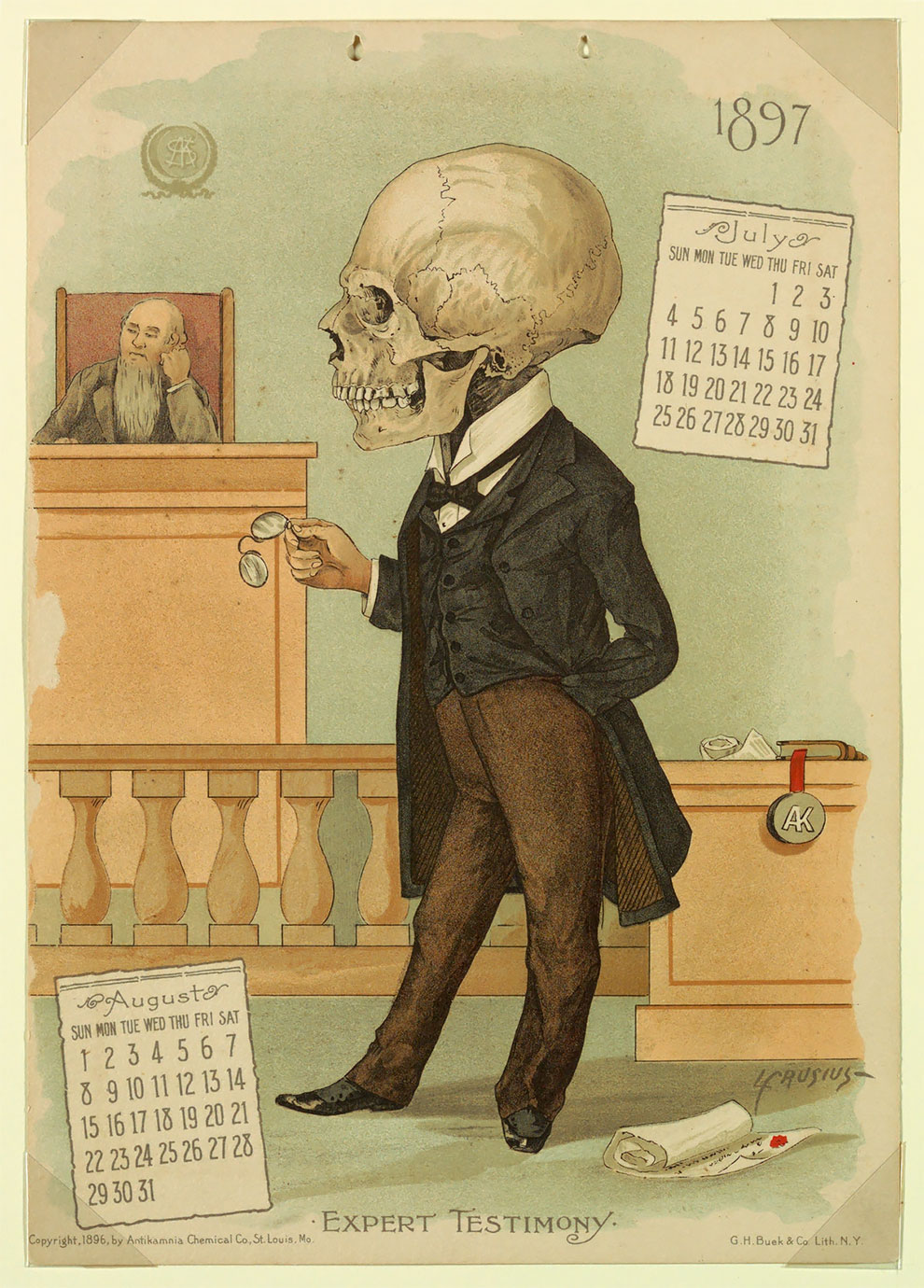 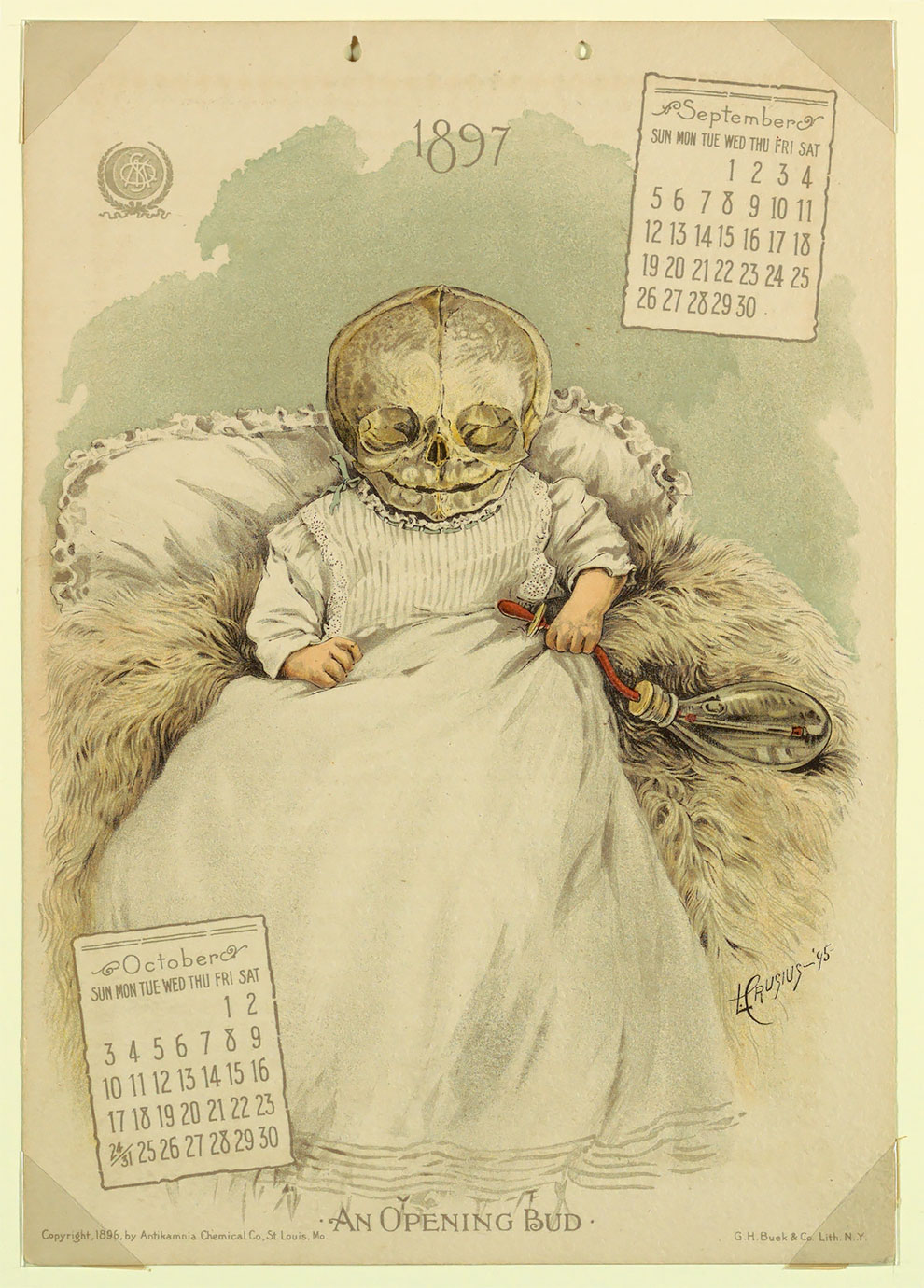 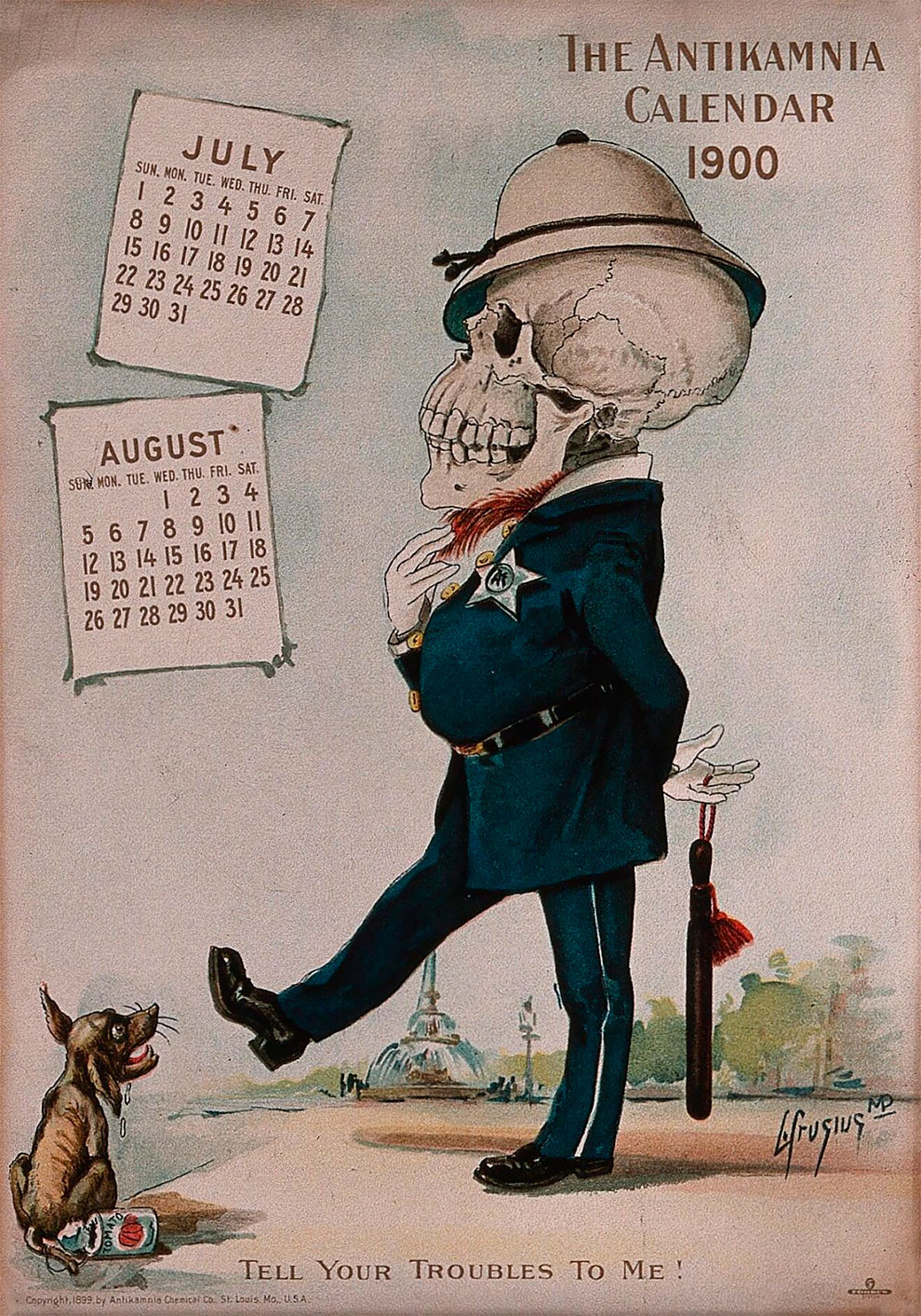 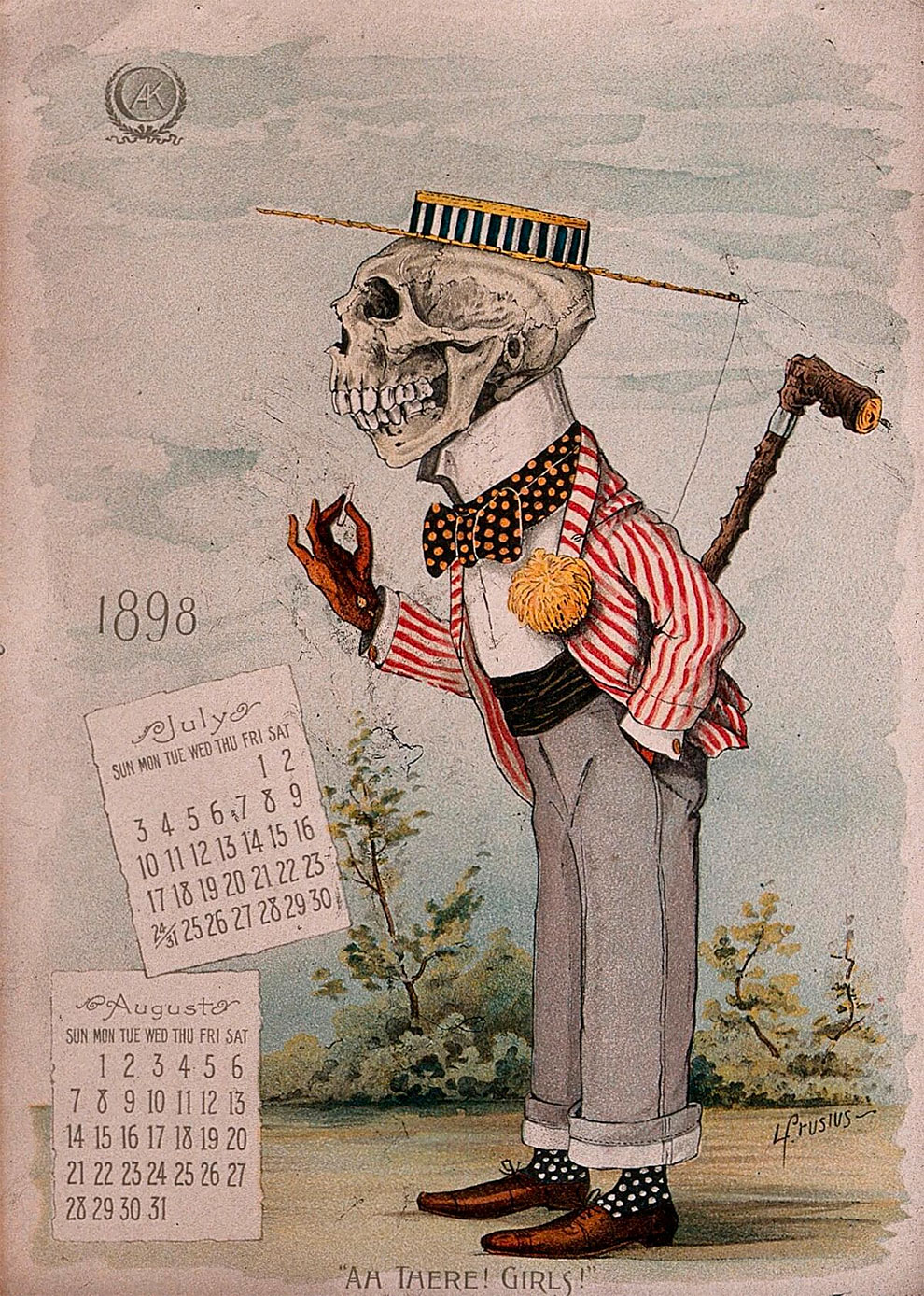 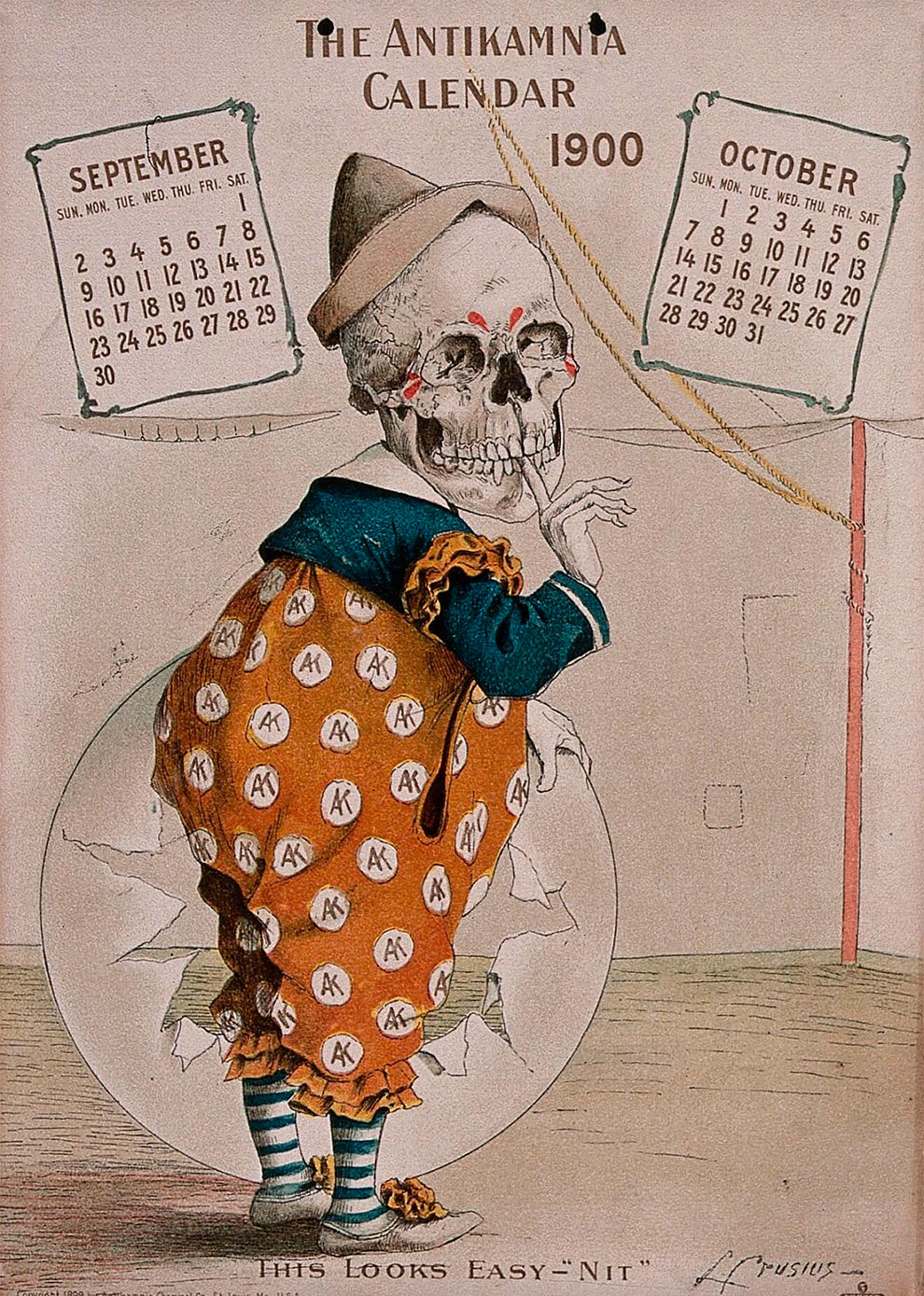 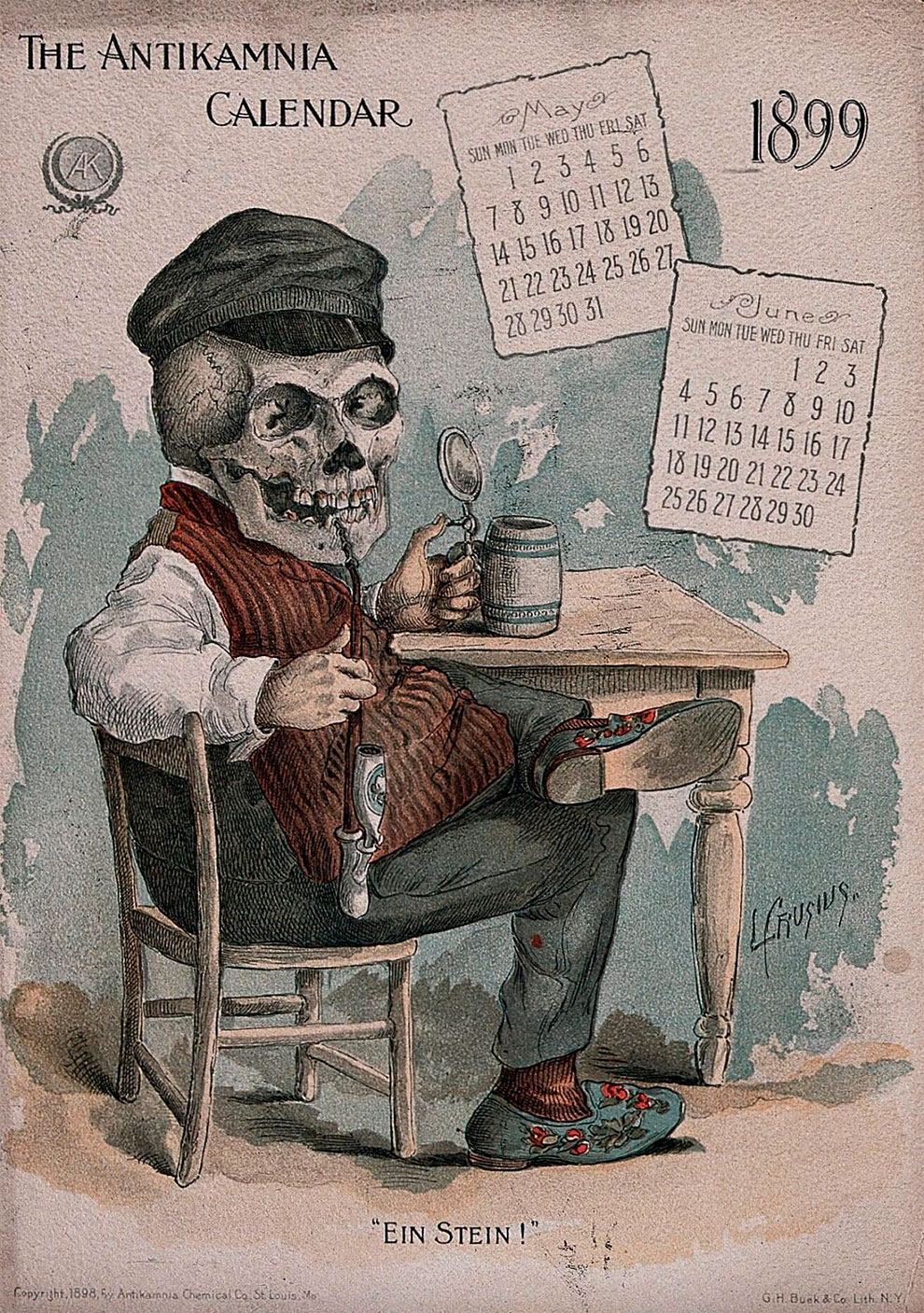 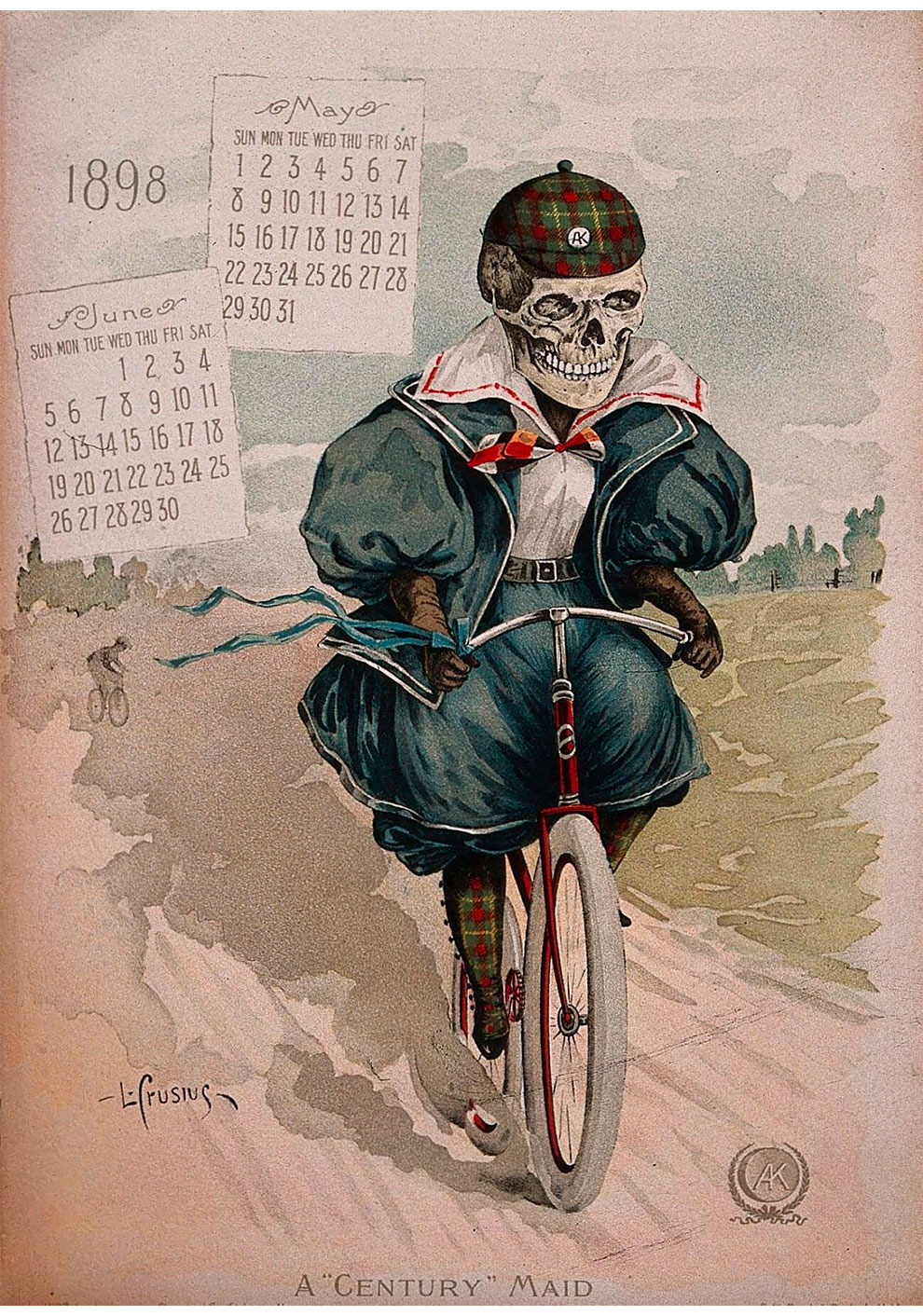 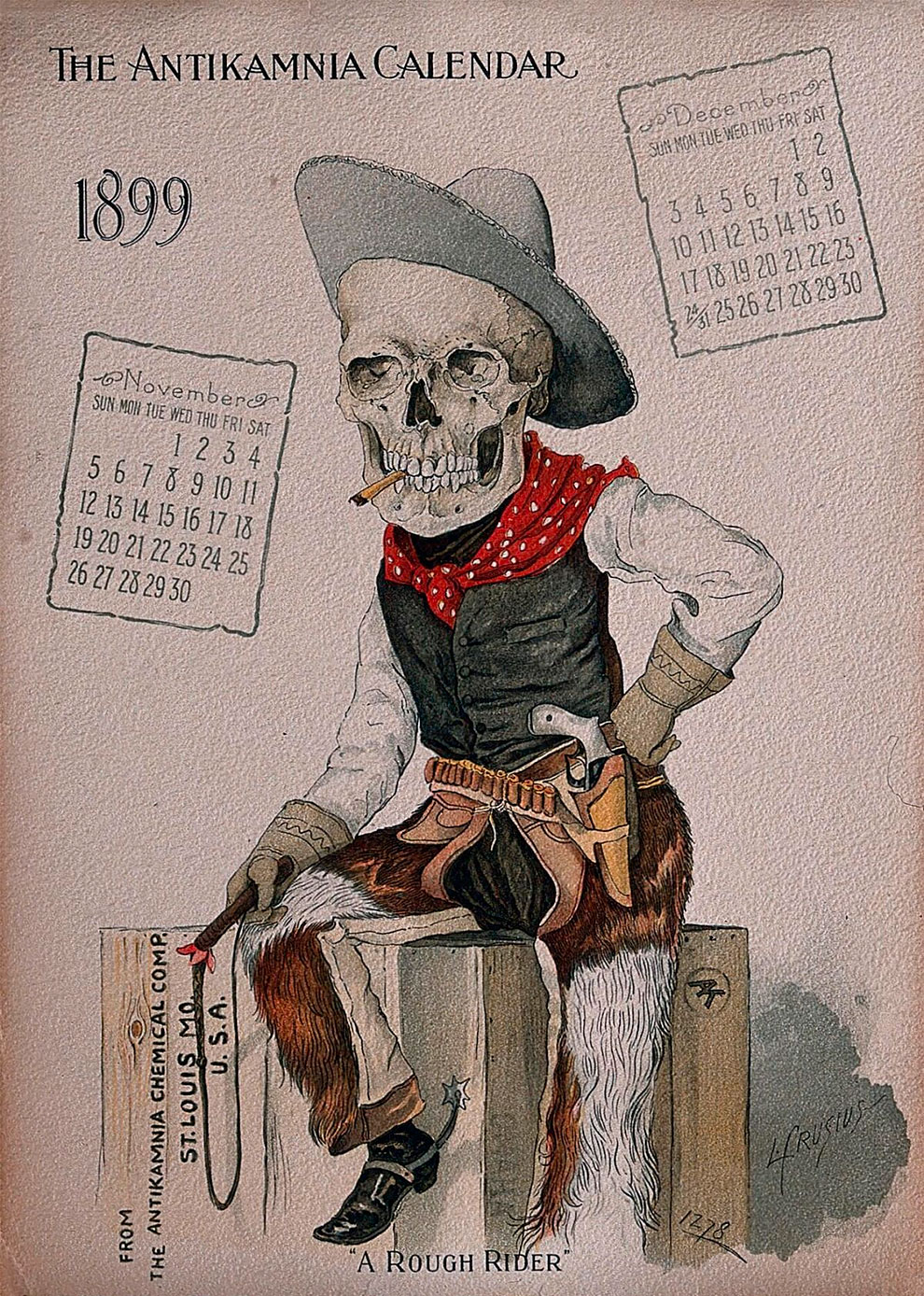 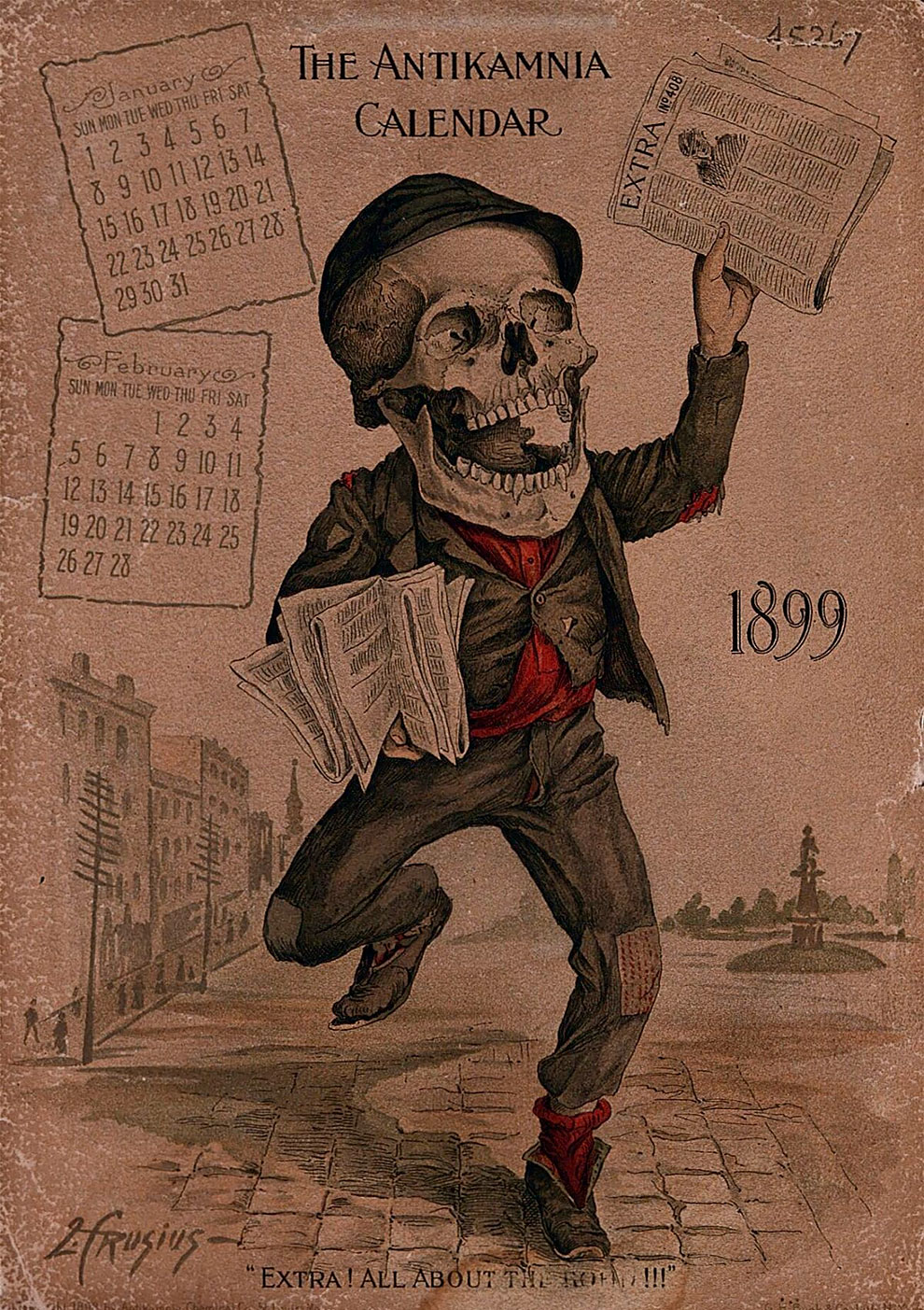 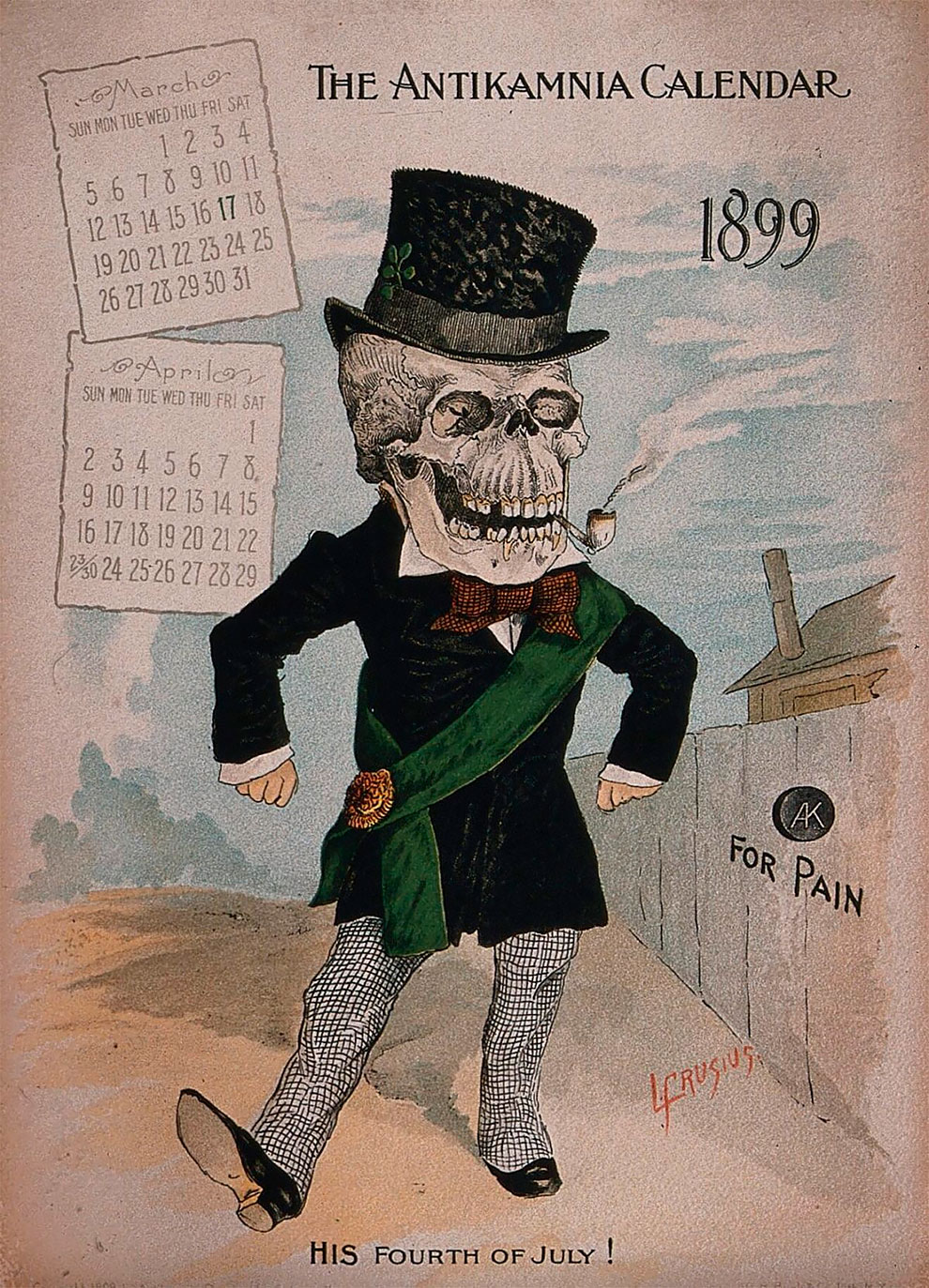 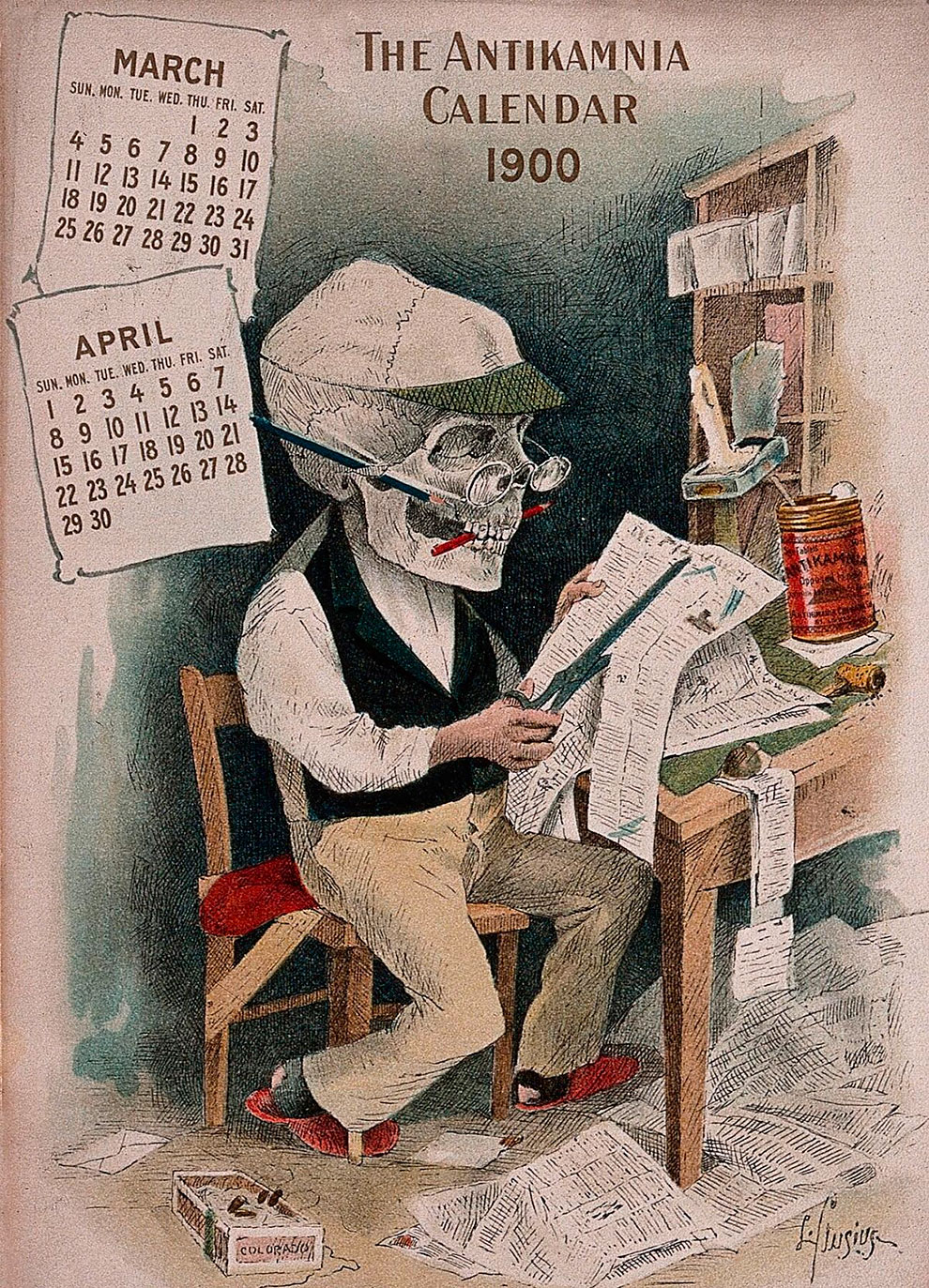 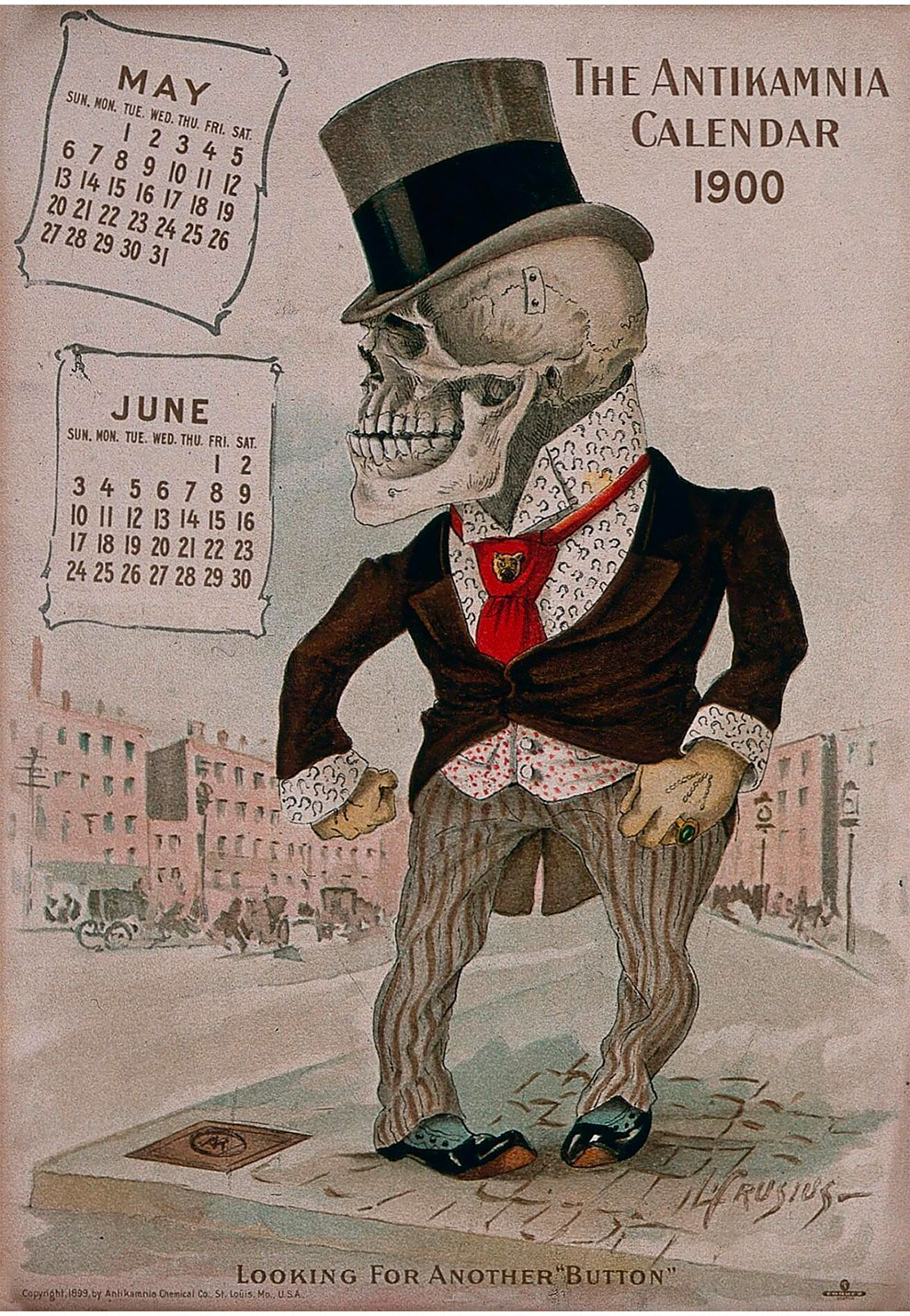 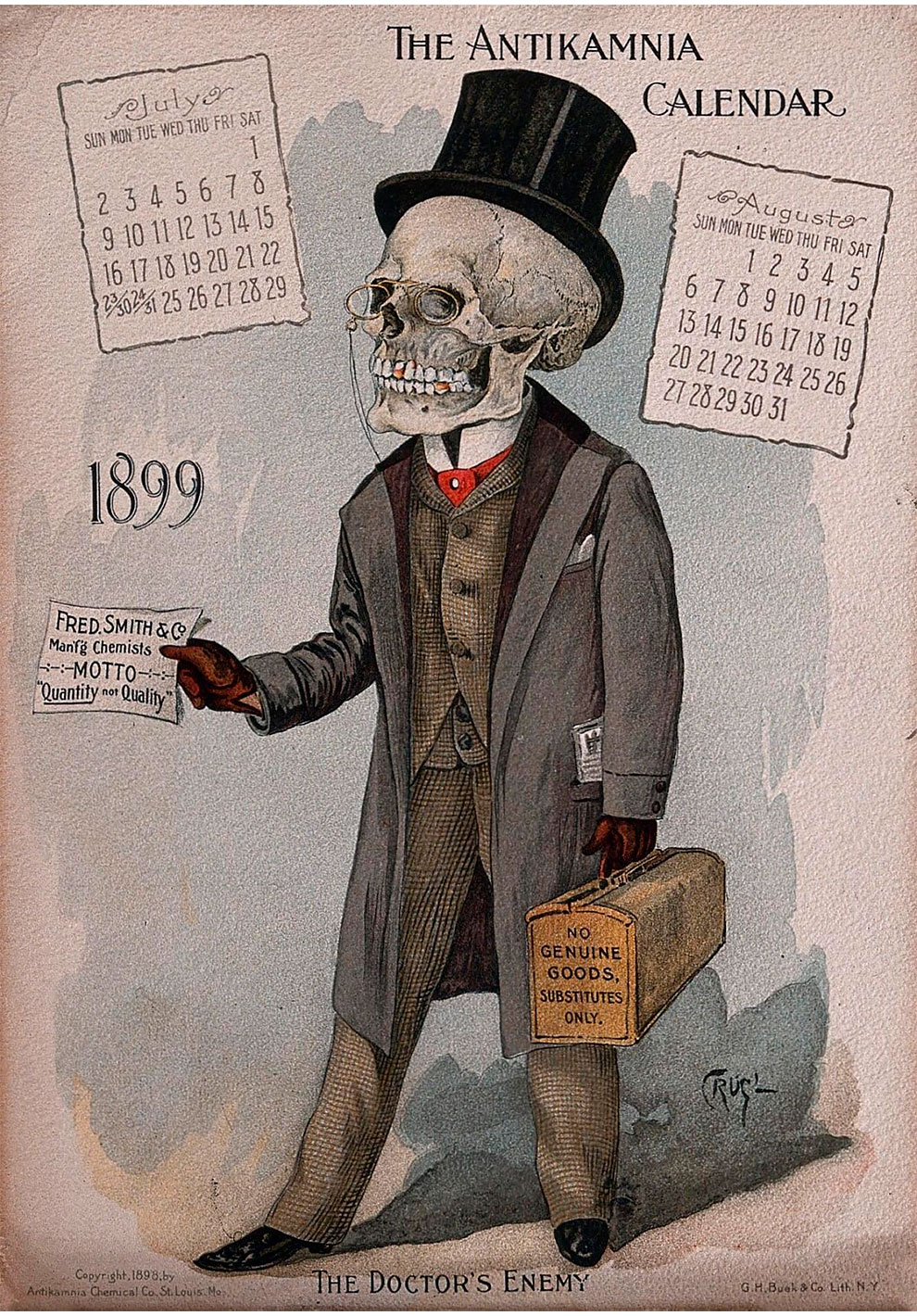 This Is A Carpet Made Of Vintage Jeans Labels
Hilarious Vintage X-Rated Movie Posters From Your Dad's Era
Cool Vintage Photos of Victorian People Posing With Their Penny-Farthings
Rare and Fascinating Historical Photos of Pasta Production From the 1920s to 1950s
Sad and Happy Moments on the Photos of Boris Register
Beautiful Photos of Fiat X1/9, One of the First Truly Affordable Mid-Engine Sports Cars
A Broken Vintage Piano Turned Into A Unique Analog Hybrid Of 20 Instruments Connected To The Piano Keys
Cool Pics That Capture Naughty Ladies of the 1950s
Yarnvertising: DIY Fashion Adverts Of The 1970s
In 1980, American Express Teamed Up With DeLorean To Produce A 24K Gold Plated DMC-12, But Only Two Were Sold!
Honeywell Kitchen Computer, The $70,000 Machine That No One Bought In The Late 1960s
Something’s Going On: Mary Lou Fulton’s Newly Rediscovered Photographs Of Punks, Mods, And Rockabillies From The 1980s
Amazing Black & White Photographs That Capture Everyday Life Of Paris From The 1930s And Early 1940s
People Use This Online Photo Enhancer To Restore Old Pictures And Share The Results
Billboards In Los Angeles Are Showing Artwork Instead Of Advertising
Before Facebook: This Is How We Used to Unfriend People Back Then
Beautiful Flight Attendant Uniforms Around the World From the 1970s
In 1909, The Strand Magazine Imagined What Would Happen If Giant Insects Attacked London
Modern Actors and Celebrities in Retro Style
Yokai Horrors From The 18th Century Bakemono Zukushi Scroll - The Nightmarish, Curious And Rather Cute Demons Were Created In The Edo Period
1938 Phantom Corsair: The Regret Of A Car Ahead Of Its Time
Vintage Album Covers From Yugoslavia Are Amazingly Awkward
In 1996, Vogue Italia Featured a Photograph of Carla Bruni Taken by Javier Vallhonrat
Joyful Illustrations of the Artist Who Misses Soviet Days
1800s, advertising, drugs, retro, skeletons, vintage