Spectacular Winners Of The US Nature’s Best Photography Contest 2017 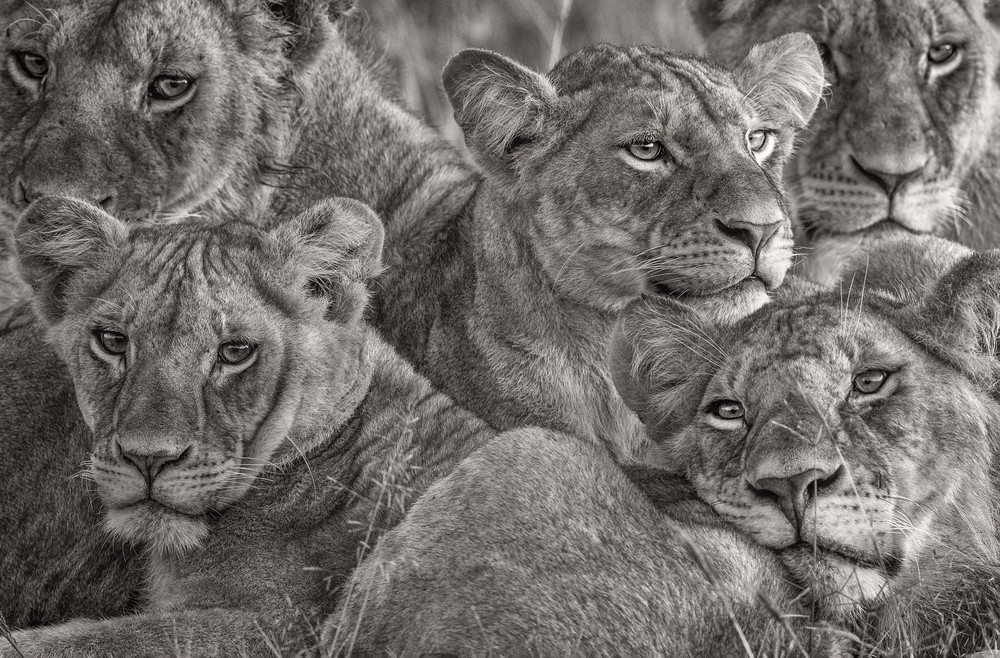 Grand Prize. African Lionesses, Maasai Mara National Reserve, Kenya: Lions are the only truly social cats; the females and offspring reside together in prides. Typically hunting in groups, the lionesses prey mostly on large hoofed mammals. Within each pride, females will often reproduce in synchrony and cross-suckle their cubs. “It was early morning in the Great Rift Valley as we searched for a famous pride of lionesses. Since it was very cold, the females were piled on top of each other, forming groups and staying close. This particular set grabbed my attention because they were staring glassy-eyed in different directions. I wanted to capture all possible details in the frame with a tight crop to make a striking black and white conversion”. (Photo by Lakshitha Karunarathna/Nature’s Best Photography Awards 2017) 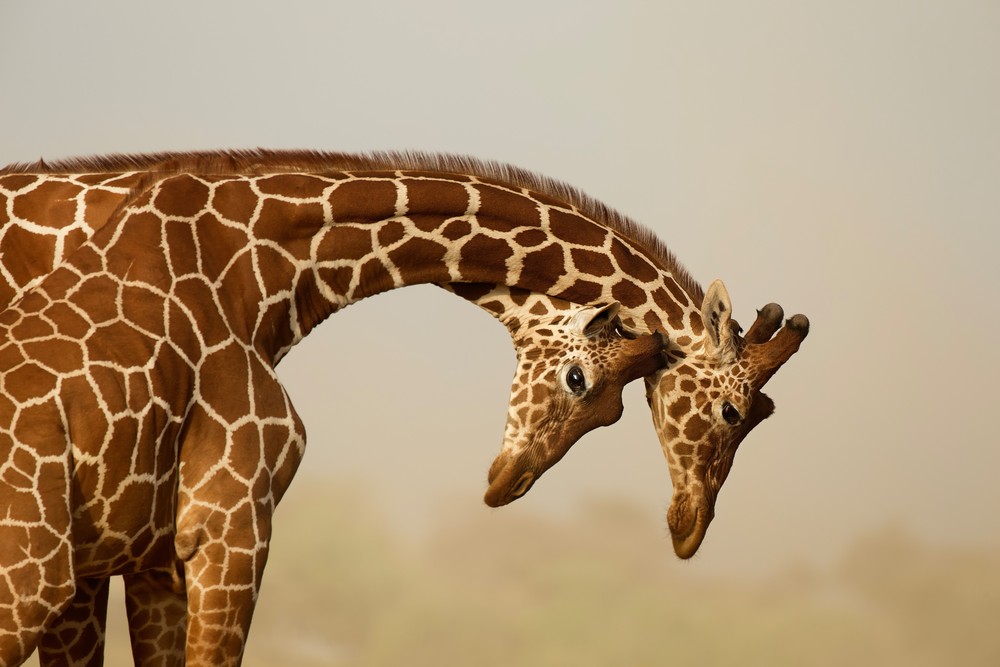 Reticulated Giraffes, Samburu National Reserve, Kenya: Young bull giraffes living in bachelor herds will spend hours each day engaging in sparring contests to establish their social hierarchy and preparing to compete with older bulls for access to females (the practice rarely results in injury). However, when the mature males leave these herds, ritualized “necking” ceases and fights for dominance are less frequent but more brutal. “While driving across stunning landscape, we came across five pairs of young giraffes ‘necking’ for dominance. Necks were swinging in high arcs, delivering thundering blows to their opponents. Although the image may look simple, it was extraordinarily challenging to frame the shot and click the shutter as they moved erratically”. (Photo by Piper Mackay/Nature’s Best Photography Awards 2017) 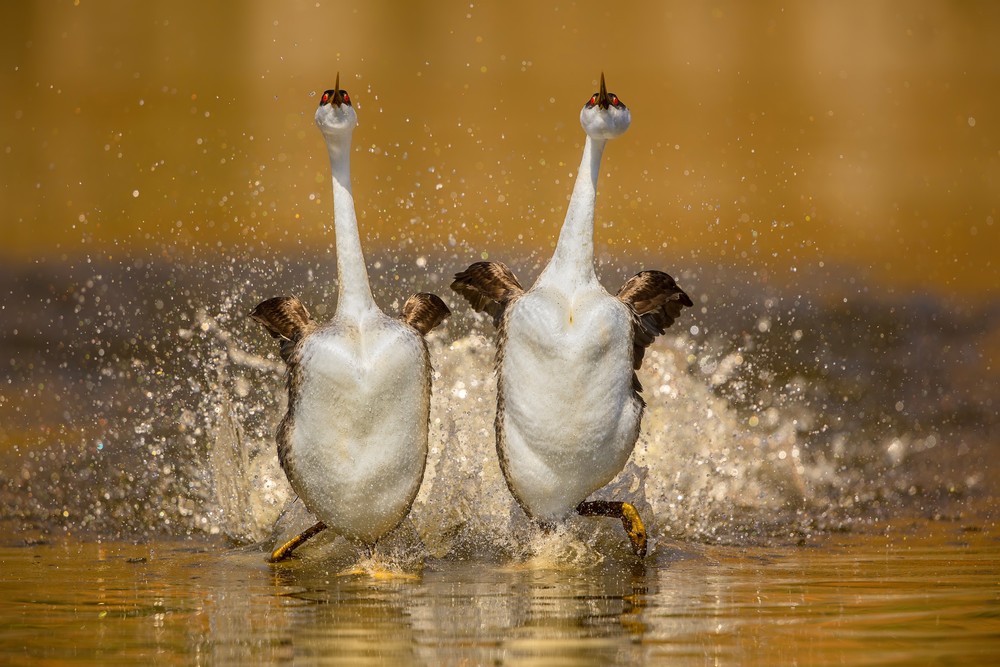 Western Grebes, San Diego, California, USA: The largest of the North American grebes, this migratory species breeds on freshwater lakes. The western grebe has an elaborate courtship display in which a couple will dance and run across water. The female lays three to five bluish-white eggs in a nest floating on the water. Both sexes take care of their young, becoming very territorial while nesting. “I waited for hours hoping to capture a western grebe pair perform their “rushing ceremony” the courtship dance in which they choose each other as their mate. Then, with their curved necks held high, the pair rose to their full height and sprinted across the water toward me. It was an explosion of beauty I will never forget. Through my image, I hope others will feel the same sense of awe I felt when I beheld this spectacle”. (Photo by Thanh Tran/Nature’s Best Photography Awards 2017) 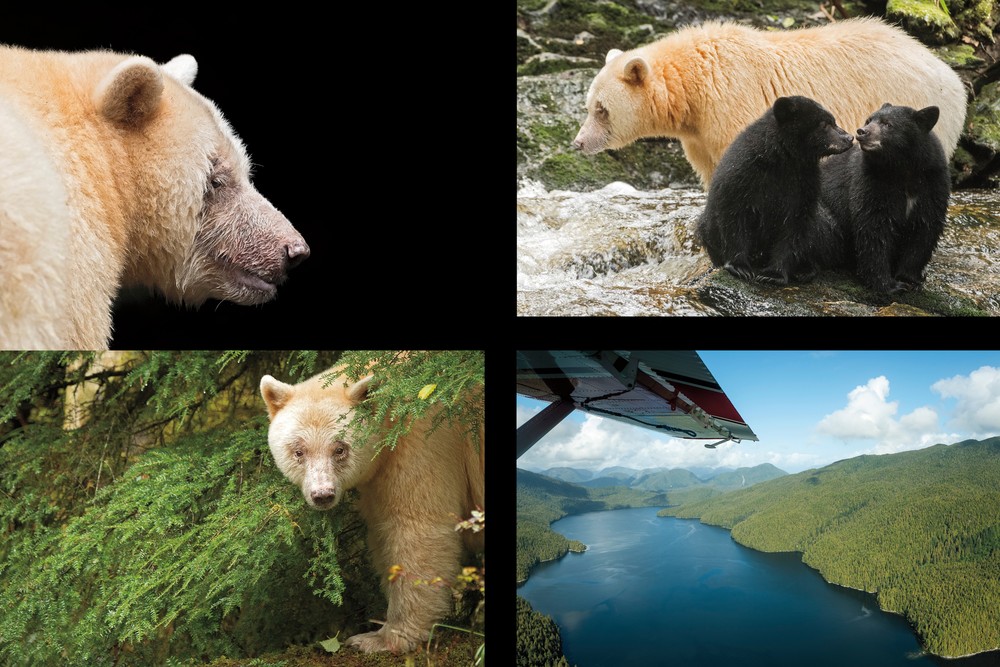 Kermode Black Bear, Great Bear Rainforest, British Columbia, Canada: The Kermode bear, sometimes called the “spirit” bear, lives only in the pristine Great Bear Rainforest. This subspecies of the North American black bear has white or cream-colored fur due to a mutated recessive gene. “My interest in documenting this region began in 2011, when I found out about a proposal to build a pipeline through the forest. Along with other environmental organizations challenging the plan – the International League of Conservation Photographers and Pacific Wild, just to name two – my goal was to help bring awareness for the protection of the rich ecosystem and this rare animal”. (Photo by Daisy Gilardini/Nature’s Best Photography Awards 2017) 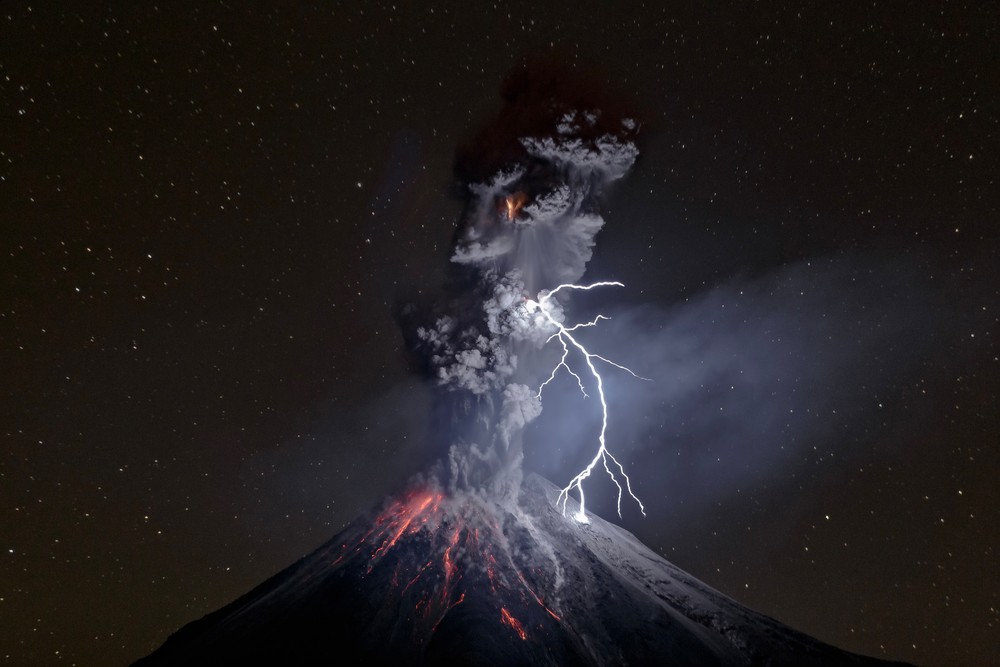 Colima Volcano Eruption, Comala, Colima, Mexico: The Colima volcano of southwest Mexico is one of the most active in North America. Constructed within a 3-mile (4.8 km) wide caldera, this stratovolcano has had more than 30 periods of eruption since 1585, including several significant eruptions since the late 1990s. “In December of 2015, I was set up 8 miles (12.8 km) away to record some activity. That night, there was incandescence over the crater – a signal that something was about to happen. An ash column began to emerge, rockfalls and minor lava flows appeared, and a massive lightning strike brightened the whole scene. This electrical activity, called a “dirty storm”, occurs when ash particles in the volcanic plume collide, producing static charges. After 15 years of constantly documenting this volcano, I finally captured the power of nature in one image”. (Photo by Sergio Tapiro Velasco/Nature’s Best Photography Awards 2017) 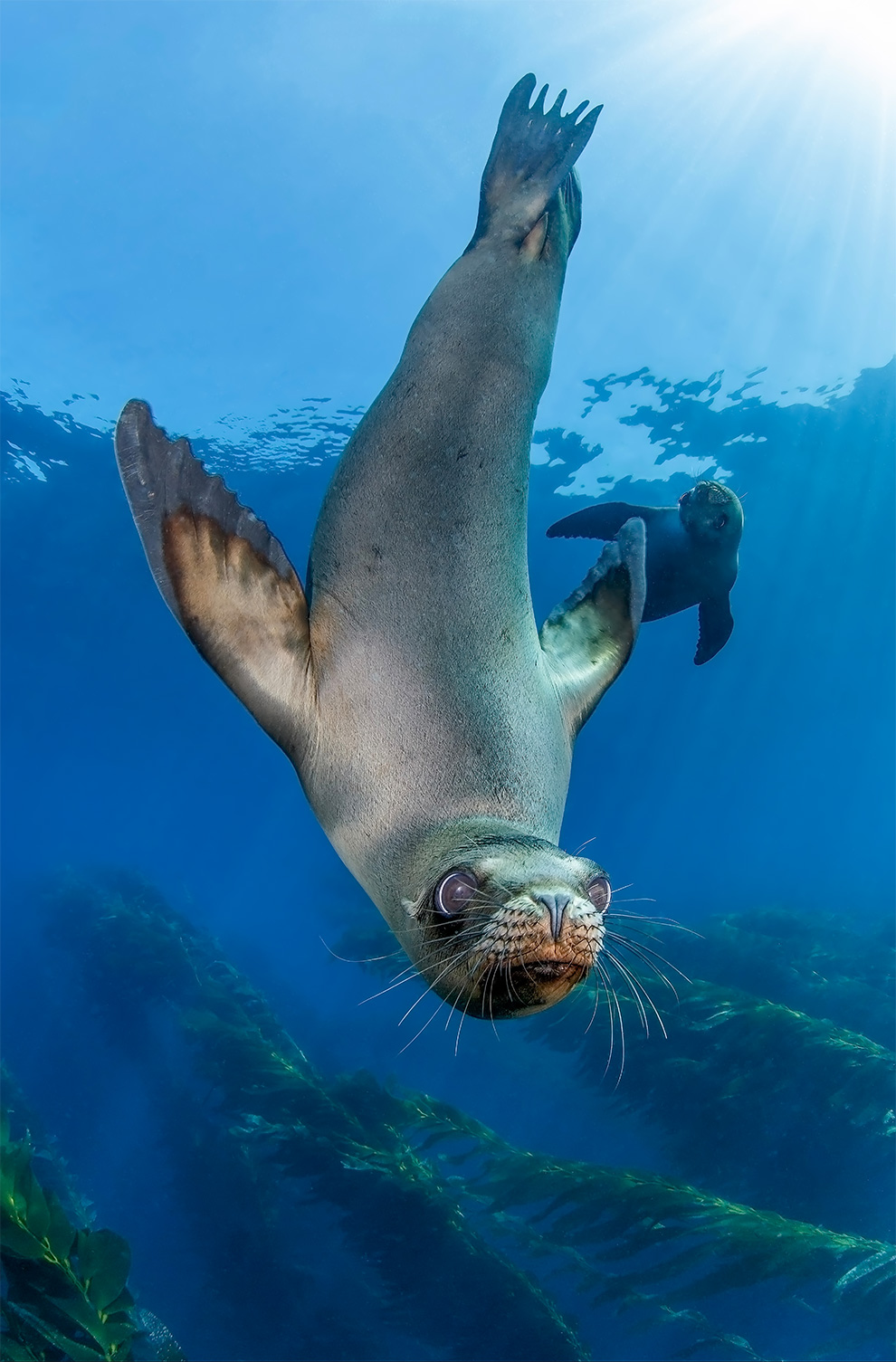 California Sea Lions, Santa Barbara Island, Channel Islands National Marine Sanctuary, California, USA: The California sea lion is a highly social and intelligent species well adapted to a semi-aquatic lifestyle. Spending most of their time in coastal waters, they feed on a large variety of fish species. They can stay underwater from two to ten minutes. Often diving an average of 85 to 320 feet (26-97 m) deep, they have been known to go well below 650 feet (198 m). “At the end of our dive, five young sea lions entertained us with high-speed passes and cavorting. This individual briefly stopped and held an inquisitive pose, with the clear blue water and kelp in the distant background”. (Photo by Andrew Sallmon/Nature’s Best Photography Awards 2017) 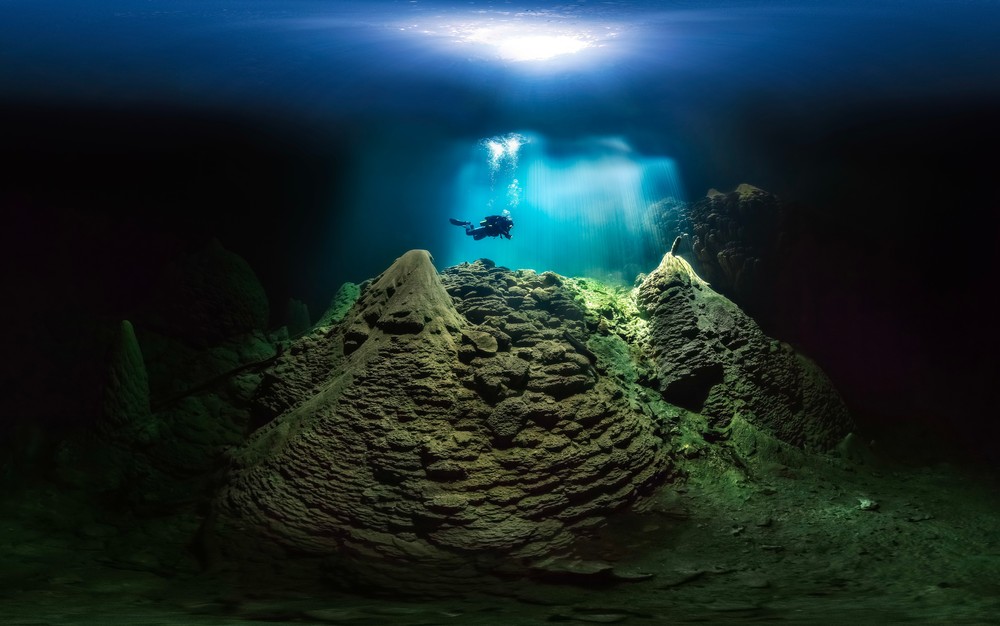 Cave Diver, Anhumas Abyss, Bonito, Brazil: The Anhumas Abyss is an underground cavern with a crystal-clear lake below, more than 260 feet (79 m) deep. A visitor must enter through a narrow opening at the top of the chamber and rappel into the cave. Snorkeling and scuba diving in the lake reveal amazing scenery. Distinctive, conical limestone stalagmites and stalactites occupy the lake and the surrounding area, some reaching 65 feet (20 m) high. “One must rappel about 235 feet (72 m) to get down into this deep lake. The photo was taken at a depth of 50 feet (15 m). It was a challenge to create the image because of the high contrast, plus the diver could not see into the darkness, making communication impossible”. (Photo by Marcio Cabral/Nature’s Best Photography Awards 2017) 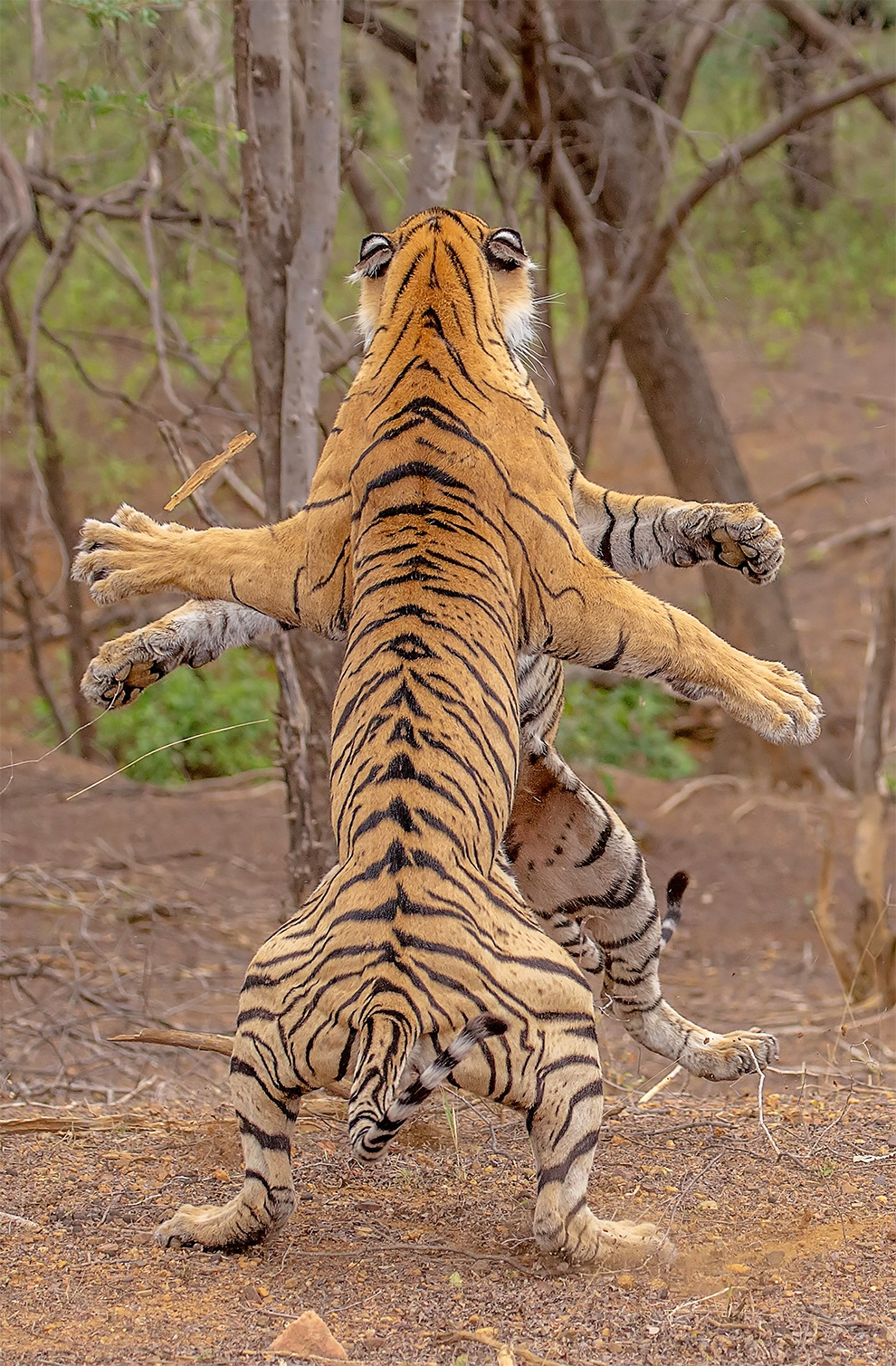 Bengal Tigers IUCN Status: Endangered , Ranthambhore Tiger Reserve, Rajasthan, India: The largest of the big cats, tigers can be found in many different environments across Asia, from the steamy jungles of India to the snowy woodlands of Siberia. The pattern and distribution of the stripes is unique to each individual. “On a visit to Ranthambhore, I was tracking a family of three sub-adult tigers and their mother. About 20 minutes before we were leaving for the day, the family made an appearance. With the cubs almost full grown, they were starting to show signs of aggression toward each other, a behavior not uncommon between tigers learning to stake out their territory. This dramatic scene happened right in front of our vehicle; I am glad to have captured it. We anticipated the fight based on their behavior and body language”. (Photo by Rahul Sachdev/Nature’s Best Photography Awards 2017) 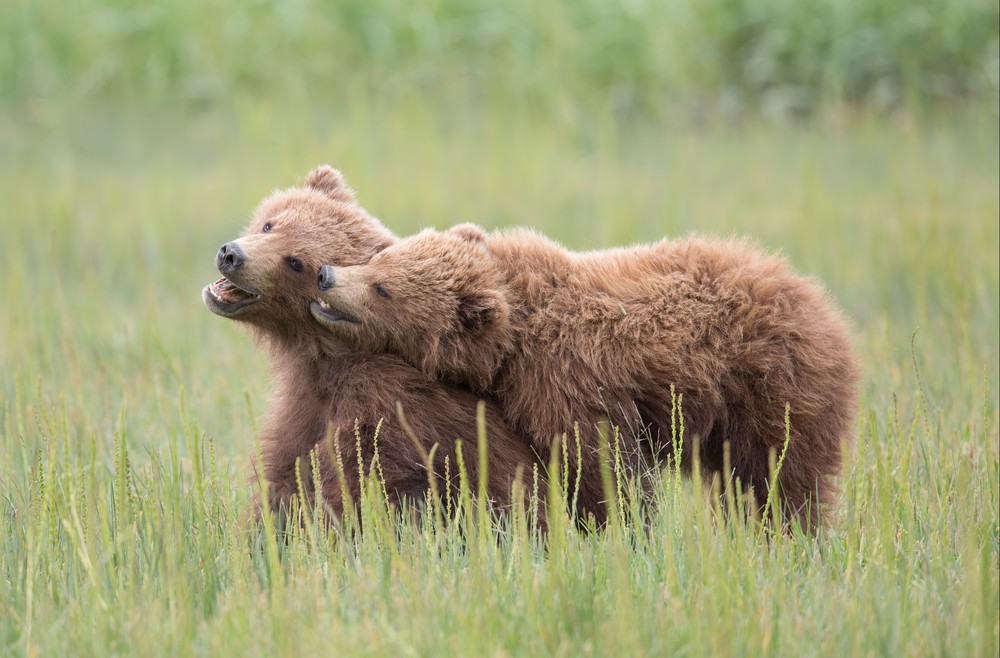 Brown Bear Cubs , Lake Clark National Park, Alaska, USA: Brown bears exhibit an enormous disparity between birth weight and adult weight. Cubs are born during hibernation and begin their life suckling in complete darkness. They remain with their mothers for two to four years, during which time they learn survival techniques: how to hunt, fish, forage and defend themselves. As the days grow short and the shadows grow long in the fall, they retire to their winter lairs. “Last June, I spent time with a mother brown bear and her two playful yearling cubs. When the sow refused to pay attention to their constant badgering, they began biting, chewing, and wrestling with each other over the sedge grass meadows”. (Photo by Ashleigh Scully/Nature’s Best Photography Awards 2017) 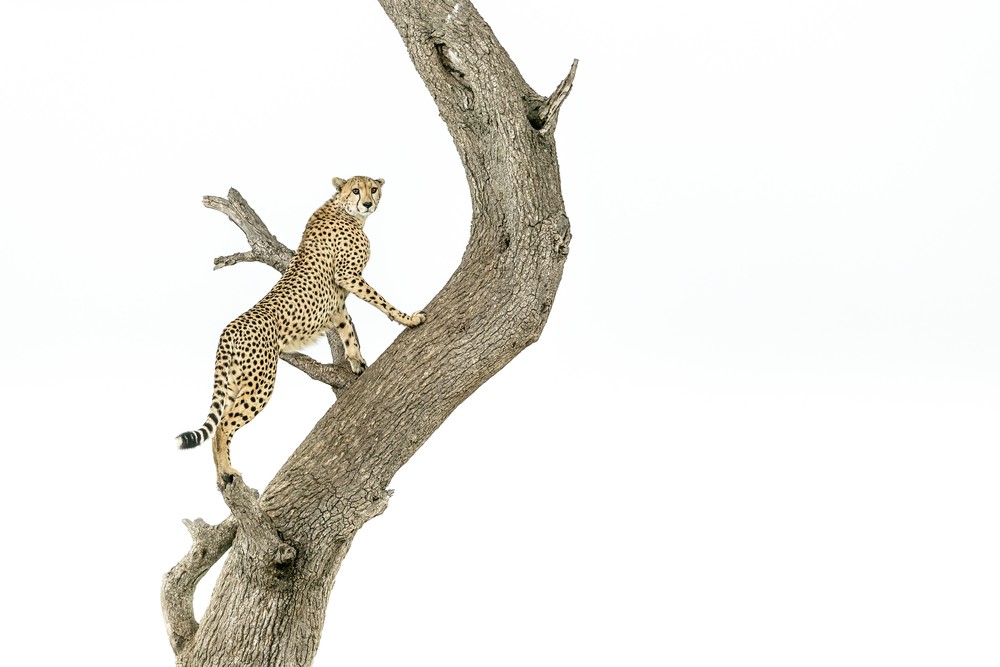 Cheetah, Maasai Mara National Reserve, Kenya: The fastest land mammal in the world, the cheetah has adaptations that allow it to sprint across the African plains. Enlarged lungs, adrenal glands, and nasal passages allow greater amounts of air to enter the lungs, and the tail is elongated to provide extra balance when running. Cheetah claws also have ridges that provide traction on the ground. “This tree was the perfect lookout point for the cheetah mother. She had not eaten for a while and was searching for a meal to feed herself and her two cubs. I opted not to get too close, instead staying back to include the shape of the tree, which proved to be the perfect prop for a photo. Over-exposing on the overcast sky provided the ‘high-key’ look”. (Photo by David Lloyd/Nature’s Best Photography Awards 2017) 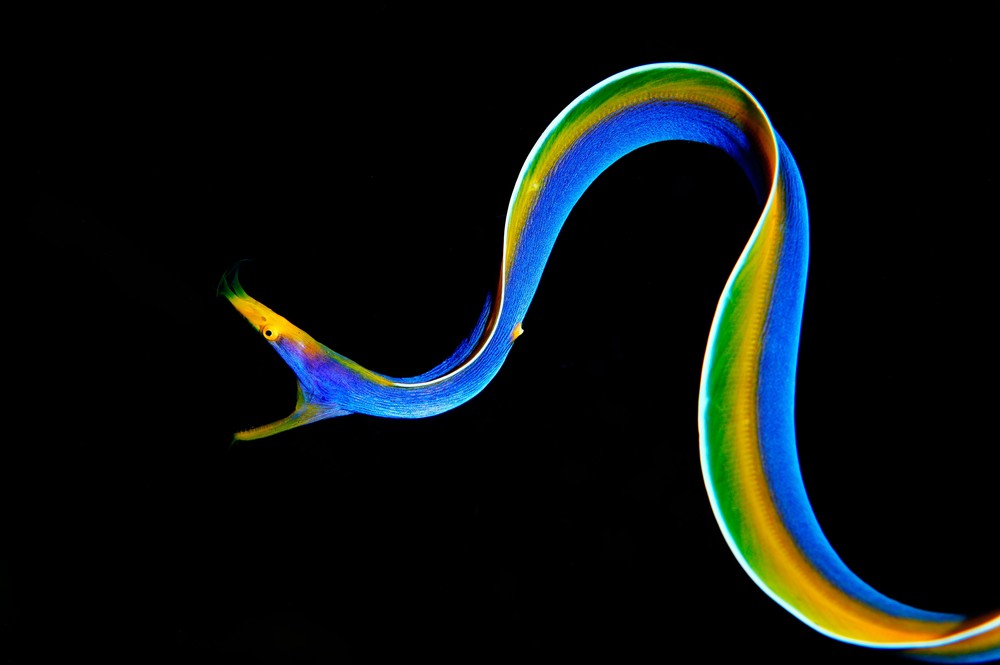 Ribbon Eel, Lembeh Strait, Indonesia: The secretive ribbon eel is most commonly seen in sand, mud, or coral rubble. An eel will sometimes stay in the same hole for months or even years. During the day, these eels feed on small fishes passing the burrow entrance. Adults are bright blue and yellow or black and yellow. The ribbon eel grows to an average length of 3.3 feet (1 m), and may have a life span of up to thirty years or more. “The ribbon eel’s habitat is the coastal reef and reef crest in clear water between 10 and 200 feet (3-61 m). They usually remain hidden in their small holes or caves and timidly poke out their heads. It’s unusual to find these eels swimming freely, which is what excited me most about this photo”. (Photo by Eduardo Acevedo/Nature’s Best Photography Awards 2017)

Photographer Posts The Alarming Results After Asking Teens To Make Their Selfies ‘Social Media Ready’
Bond Girl Halle Berry Introduces Her First 5th Avenue Shoe Collection
Majestic Photos Of Mount Fuji At Dawn That Will Inspire Your Week
Beautiful Vintage Photos Of The Circus Girls Of Sarasota Taking A Break In 1949
Rare Pics Of The Infamous '50s London Girl Gang Are Unbelievably Cool
Artist Makes A Fun Virtual Road Trip With Her Photoshopped Family
Dreamy Photos Of Boston And Massachusetts Suburbs By Greg DuBois
"Graphemic Synesthesia": Artist Duo Spent 2 Years Photographing ‘Colored’ Letters To Show How They See Them
Incredible Images Taken By A Professional Photographer From An Aerial Point Of View
Hooray for Jia Jia
Artist Reimagines 5 Disney Fathers As Real Dads, And They’re Hella Handsome
Shocking Before and After Composite Portraits of Drug Abuse
Dark, Surreal And Moody Photo Works By Simon Kerola
Beautiful Photographs By Brock Elbank In Tribute To Freckles
Madagascar's Monster
1980s: The Period Of Women Rock Hairstyle Boom
80 Wonderful Black And White Photographs Of The Famous (And Not So Famous) People Who Have Left Their Mark On History
T-Rex Wedding Photo Shoot Proves Love’s Not Dead
Photographer Paul Clifton Perfectly Captures A Brutal Beauty Of Classic Motorcycles
6-Legged Lamb Born in Georgia Plus 16 Other Bizarre Creatures
18 Photos Of America Like You’ve Never Seen It Before
These Colourised Photographs Show How People Took Shelter in The London Underground in The 1940s
Portraits of Lovely Ladies Featured on the Covers of Radio Control Modeler Magazines From the 1970s and 1980s
No Name
contest, nature, photography, spectacular, winners