A selection of images from this year’s World Press Photo 2022 contest, with regional as well as overall winners for the first time, supported by a regional judging process.

Story of the year: Saving Forests with Fire 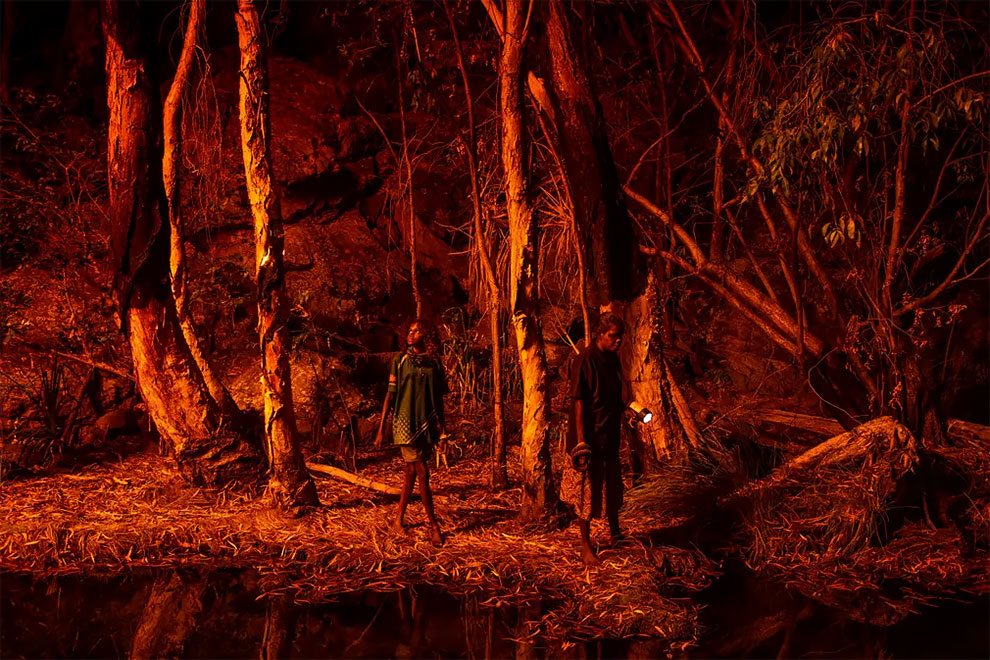 Indigenous Australians strategically burn land in a practice known as cool burning, in which fires move slowly, burn only the undergrowth, and remove the buildup of fuel that feeds bigger blazes. The Nawarddeken people of West Arnhem Land have been practising controlled cool burns for tens of thousands of years and see fire as a tool to manage their 1.39m-hectare homeland.

“It was so well put together that you cannot even think of the images in disparate ways. You look at it as a whole, and it was very well done” – global jury chair Rena Effendi. Photograph: Matthew Abbott, Australia, for National Geographic/Panos Pictures/World Press Photo 2022 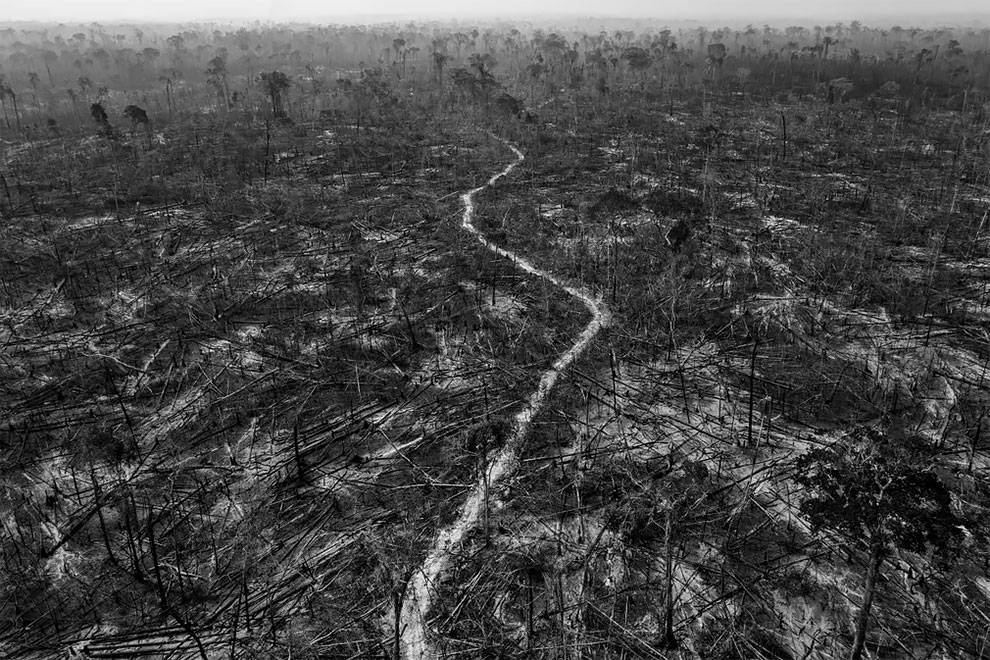 The Amazon rainforest is under great threat, as deforestation, mining, infrastructural development and exploitation of other natural resources gain momentum under President Jair Bolsonaro’s environmentally regressive policies. Since 2019, devastation of the Brazilian Amazon has been running at its fastest pace in a decade. An area of extraordinary biodiversity, the Amazon is also home to more than 350 different Indigenous groups.

“This project portrays something that does not just have negative effects on the local community but also globally, as it triggers a chain of reactions on a global level” – Rena Effendi. Photograph: Lalo de Almeida, Brazil, for Folha de São Paulo/Panos Pictures/World Press Photo 2022 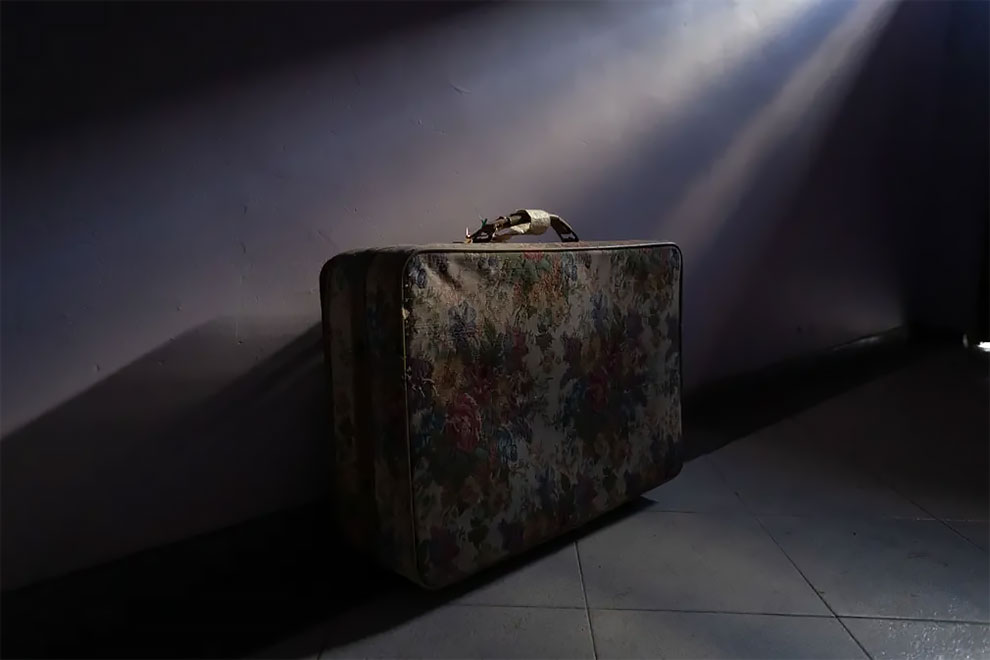 Through personal stories, La Sangre Es Una Semilla questions the disappearance of seeds, forced migration, colonisation, and the subsequent loss of ancestral knowledge. The video is composed of digital and film photographs, some of which were taken on expired 35mm film and later drawn on by Romero’s father. In a journey to their ancestral village of Une, Cundinamarca, Colombia, Romero explores forgotten memories of the land and crops and learns about her grandfather and great-grandmother who were ‘seed guardians’.

“There are so many layers to this narrative in terms of her use of audio, video, stills and sequencing” – global jury member Clare vander Meersch. Photograph: Isadora Romero/c/o World Press Photo 2022

World press photo of the year 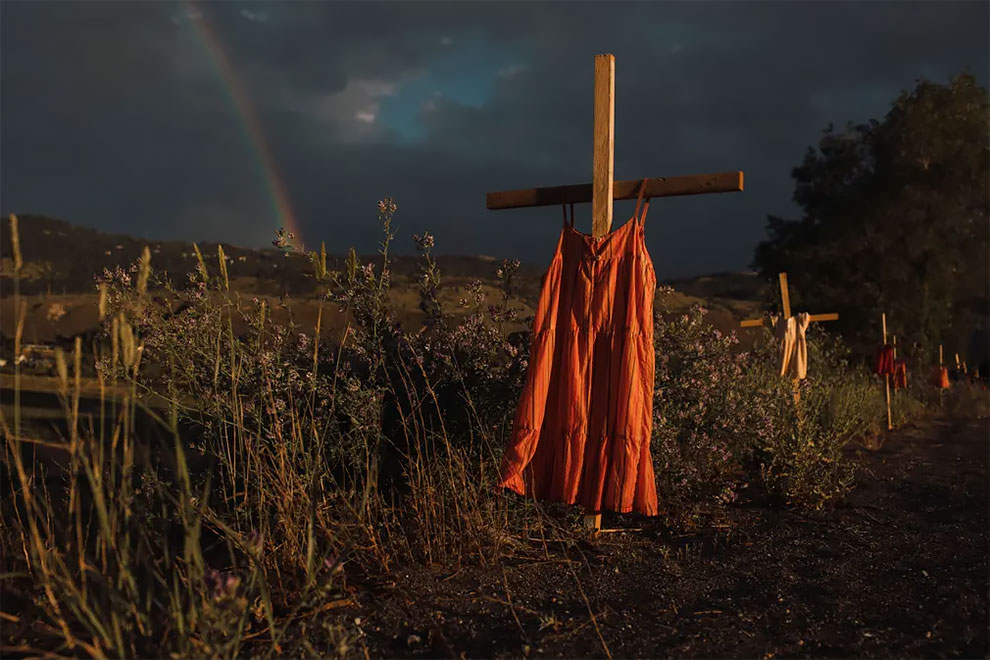 Red dresses hung on crosses along a roadside commemorate children who died at the Kamloops Indian residential school, an institution created to assimilate Indigenous children, after the detection of as many as 215 unmarked graves.

“It is a kind of image that sears itself into your memory, it inspires a kind of sensory reaction. I could almost hear the quietness in this photograph, a quiet moment of global reckoning for the history of colonisation, not only in Canada but around the world” – Rena Effendi. Photograph: Amber Bracken, Canada, for The New York Times/c/o World Press Photo 2022 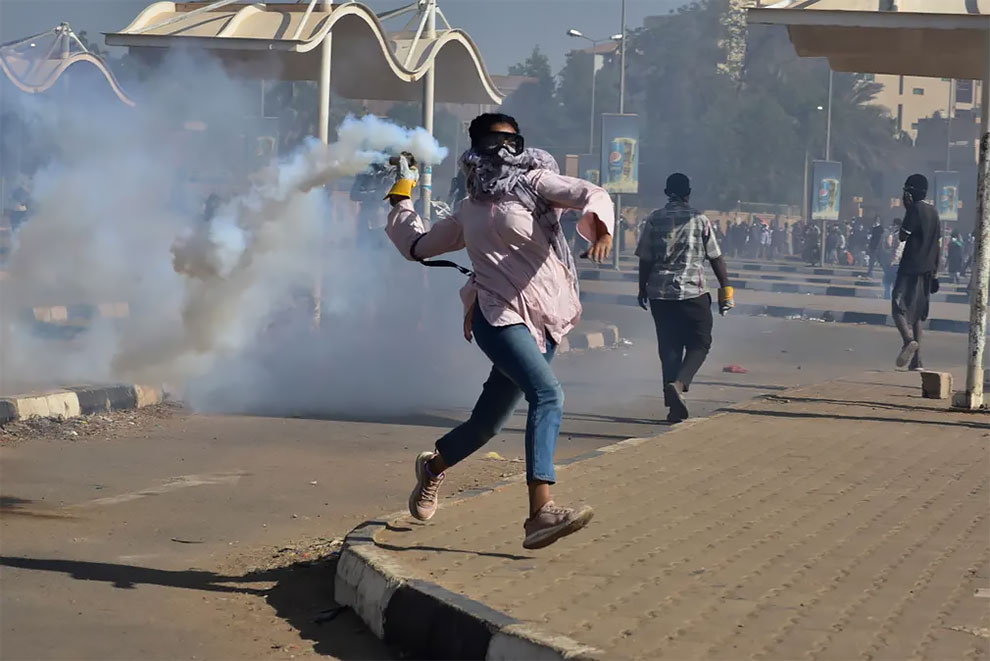 A protester throws back a teargas canister fired by security forces, during a march demanding an end to military rule, in Khartoum, Sudan, in December 2021. Demonstrators marched through Khartoum and the neighbouring cities of Omdurman and Bahri, demanding political power be transferred to civilian authorities. The protests were brutally suppressed. Photograph: Faiz Abubakr Mohamed/c/o World Press Photo 2022 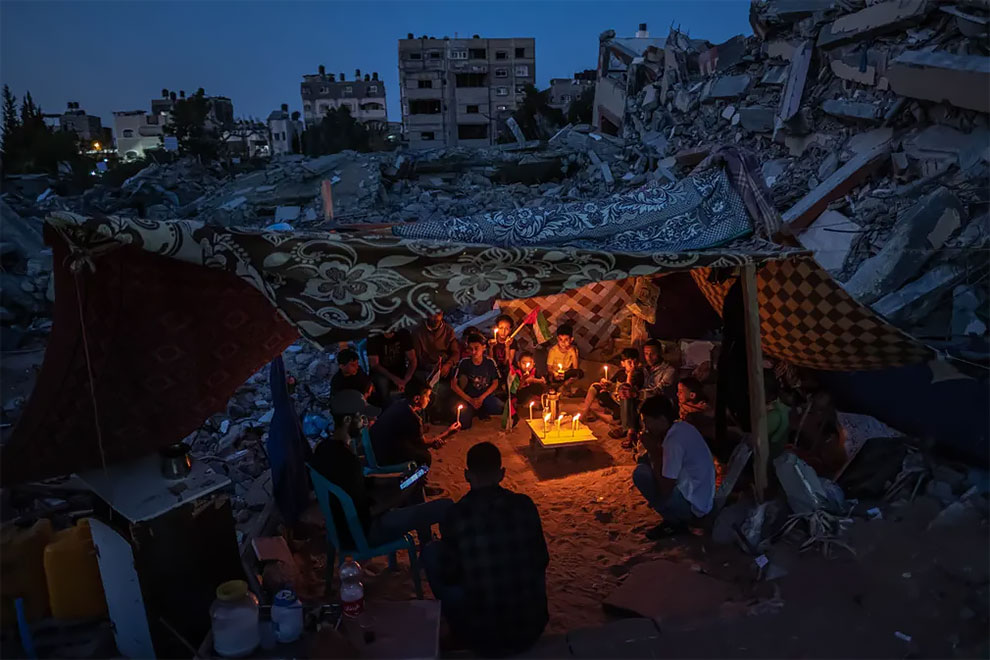 Palestinian children hold candles during a rally amid the ruins of houses destroyed by Israeli strikes, in Beit Lahia in May 2021. Gaza residents returned to damaged and destroyed homes as the ceasefire between Israel and Hamas appeared to be holding. The ceasefire ended 11 days of fighting that killed more than 250 Palestinians, many of them women and children, and 13 Israelis. Photograph: Fatima Shbair/Getty Images/c/o World Press Photo 2022 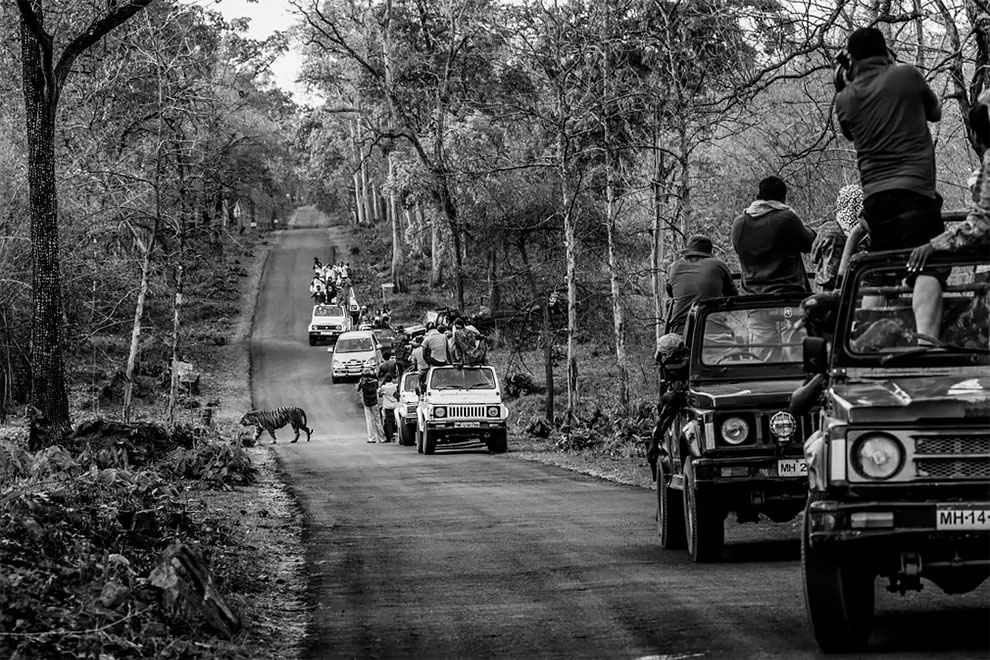 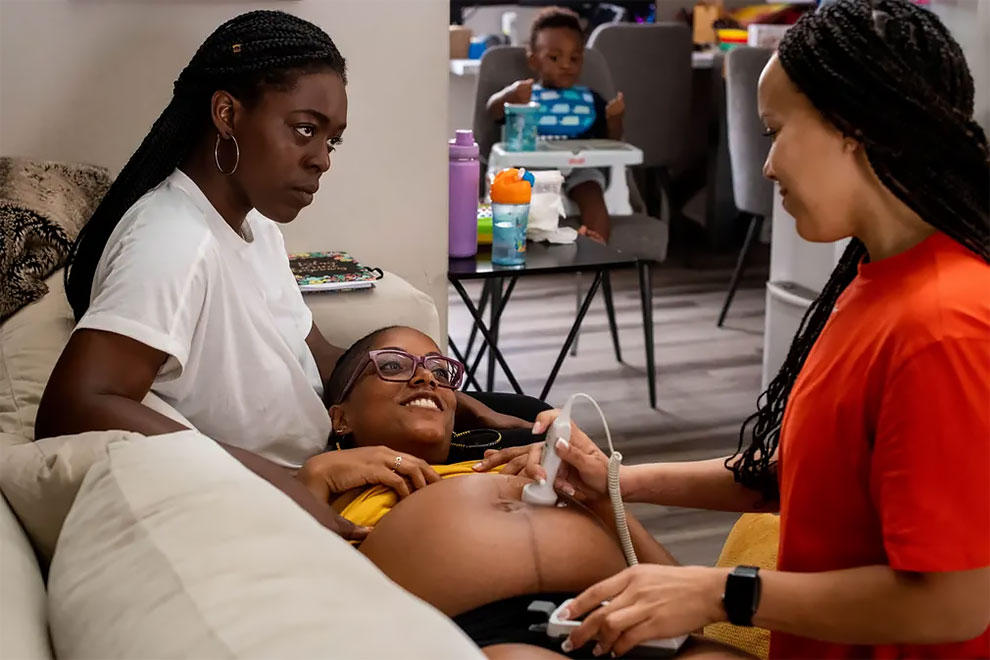 Angie Miller listens to the heartbeat of MyLin Stokes Kennedy’s baby as her wife, Lindsay, and their child, Lennox, watch at their Fountain Valley home. Mortality rates of Black women from perinatal complications are notably higher than for white women. Black women in the US can find it hard to trust the medical establishment, because of their experience of deep-running racism that may affect medical outcomes. Photograph: Sarah Reingewirtz, for Los Angeles Daily News and Southern California News Group/c/o World Press Photo 2022 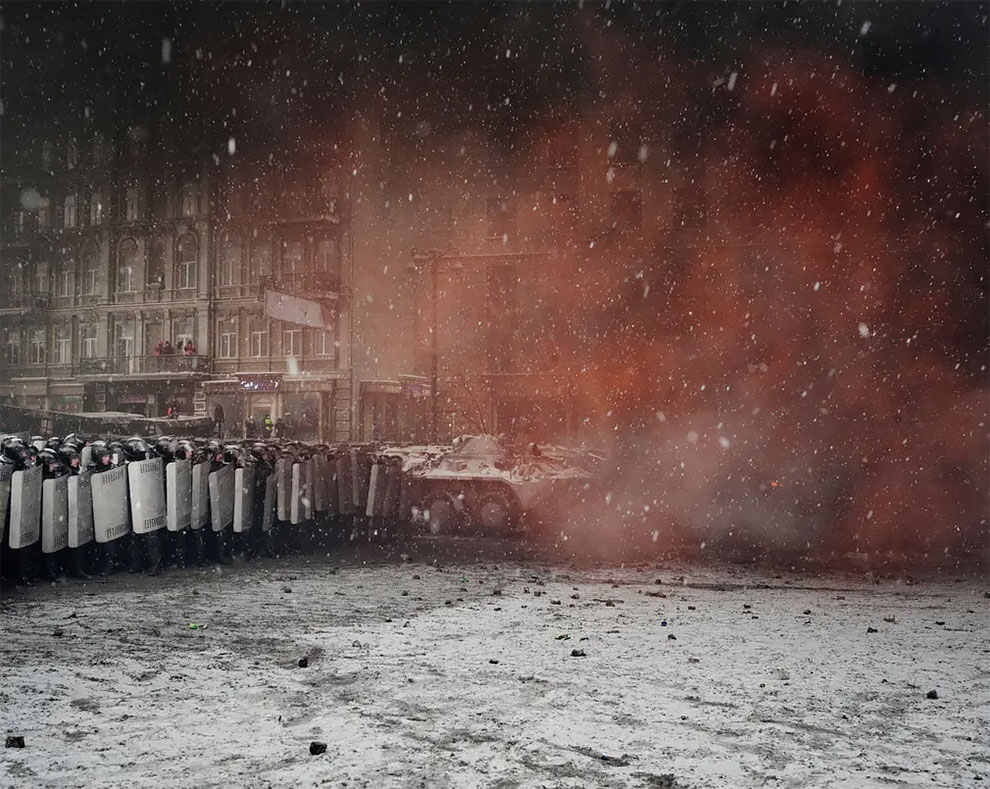 Hrushevskoho street in Kyiv, on 22 January 2014, the second day of violent confrontations between law enforcement and pro-EU protestors. The special anti-riot units, the Berkouts, use weapons against the masses. At the end of the day, they count five dead and many hundred wounded. Photographed over 2013-2021, this project looks at the longer-term context leading to the 2022 war in Ukraine. Photograph: Guillaume Herbaut, Agence VU’/c/o World Press Photo 2022 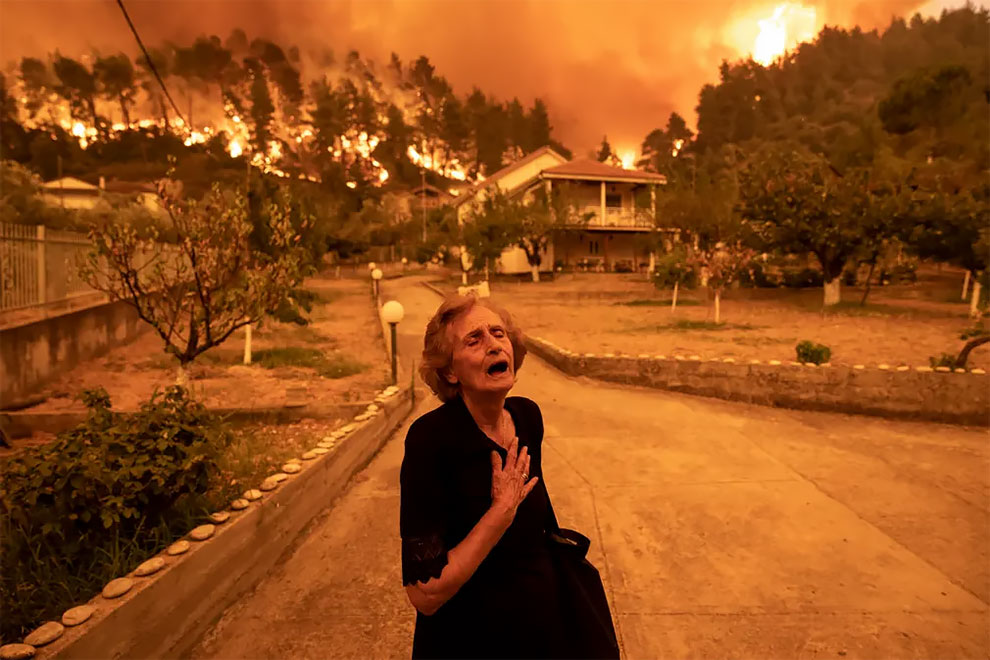 Kritsiopi Panayiota, 81, reacts as a wildfire approaches her house in the village of Gouves on Evia island, Greece, on 8 August 2021. After a long heatwave period, the hottest weather Greece had seen for 30 years, thousands of residents were evacuated by boat after wildfires hit Greece’s second-largest island. Photograph: Konstantinos TsakalidisTsakalidis for Bloomberg News/c/o World Press Photo 2022 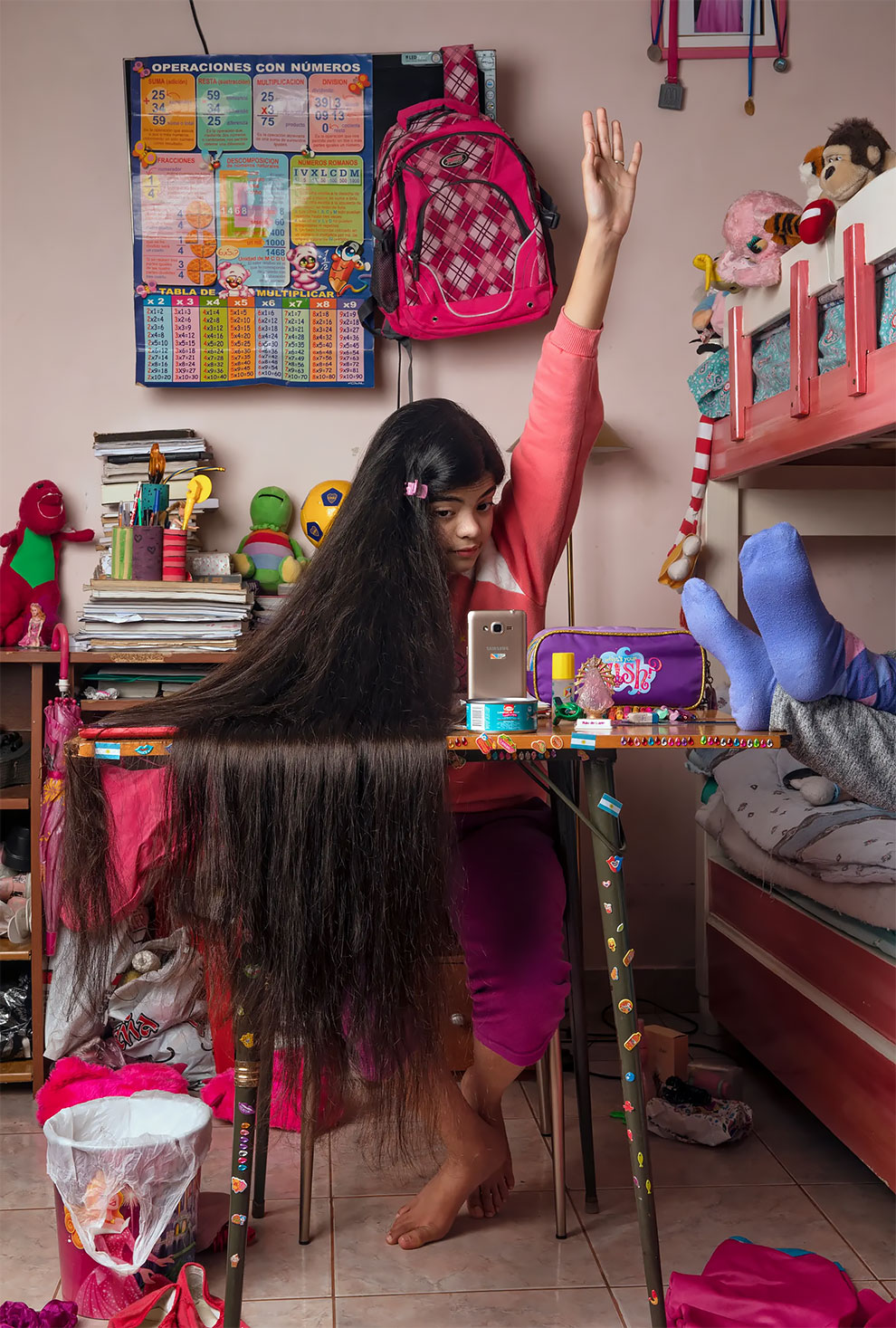 Antonella studies via Zoom, using her mother’s mobile phone, in her room at home in Buenos Aires, Argentina, in June 2021. Her parents are keen that she keeps up to date with her education, and, along with other parents, organise group studies and virtual get-togethers via WhatsApp. In August 2020, Antonella vowed to cut her long hair only when she could resume in-person classes at school, which had been suspended as a result of the Covid pandemic.

She said: “When I finally go back to school they will know I’m a different person, I feel like a different person.” She cut her hair on 25 September 2021, on the weekend before she returned to classes. Photograph: Irina Werning, Pulitzer Center/c/o World Press Photo 2022 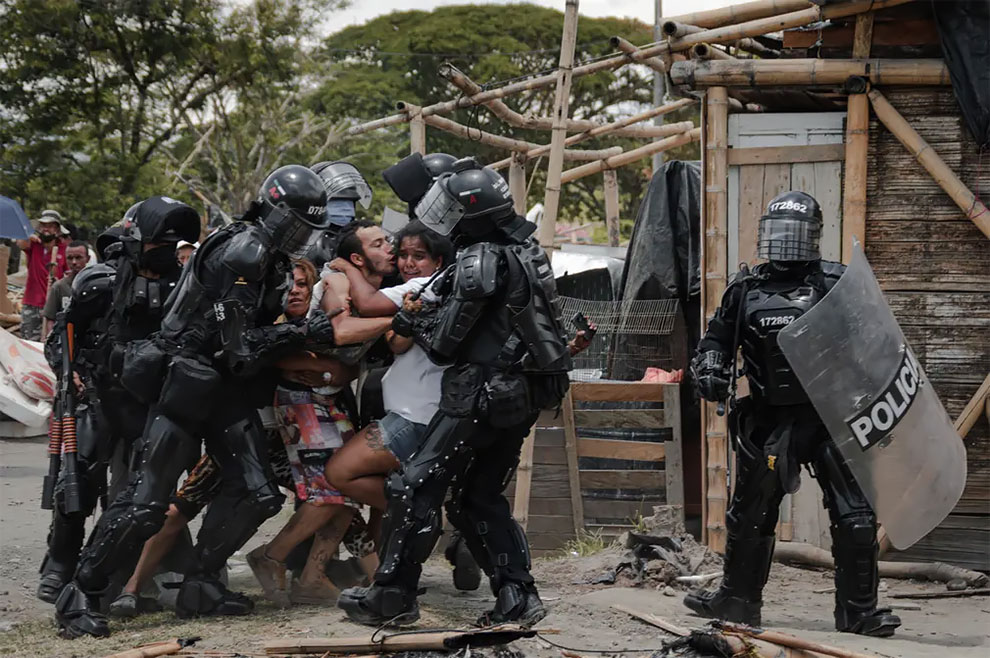 Police agents arrest a man while his wife and family resist, during evictions of people from the San Isidro settlement in Puerto Caldas, Colombia, on 6 March 2021, ahead of construction of a railroad planned to connect the capital of the Risaralda district with Buenaventura, Colombia’s main Pacific seaport. Authorities said the megaproject would bring work and investment to the area, and that the ground did not officially belong to the people being evicted. After publication of Encina’s photographs, members of the central government intervened and evicted residents from San Isidro were promised rehousing and compensation. Photograph: Vladimir Encina/c/o World Press Photo 2022 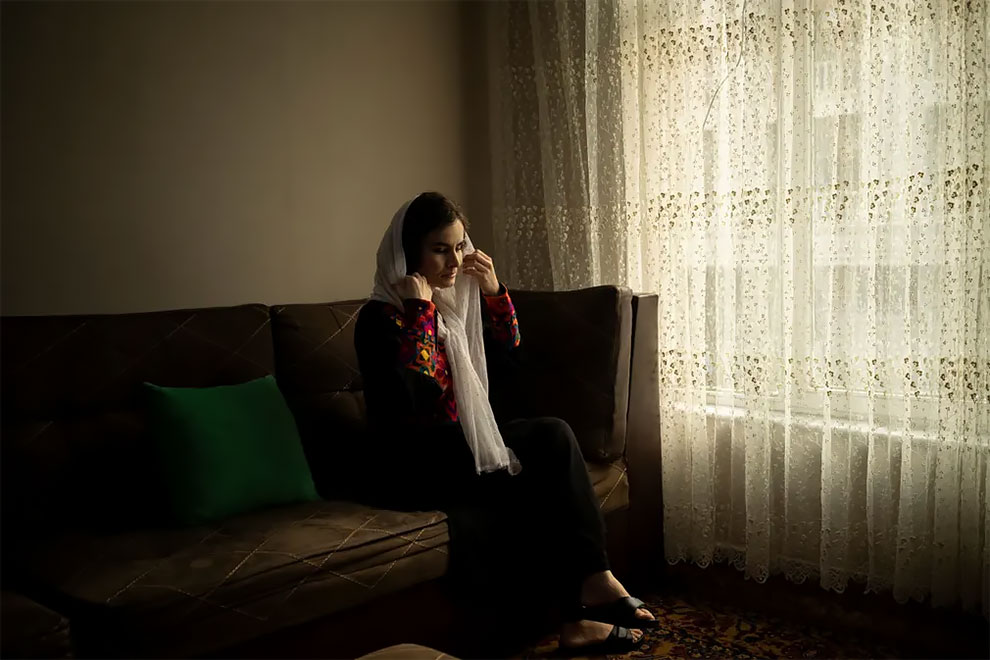 Asita Ferdous sits inside her home in Kabul, Afghanistan on 10 November 2021. She is the director of the Ariana Cinema, but is not allowed to enter the cinema because the Taliban ordered female government employees to stay away from their workplaces. Photograph: Bram Janssen/Associated Press/c/o World Press Photo 2022 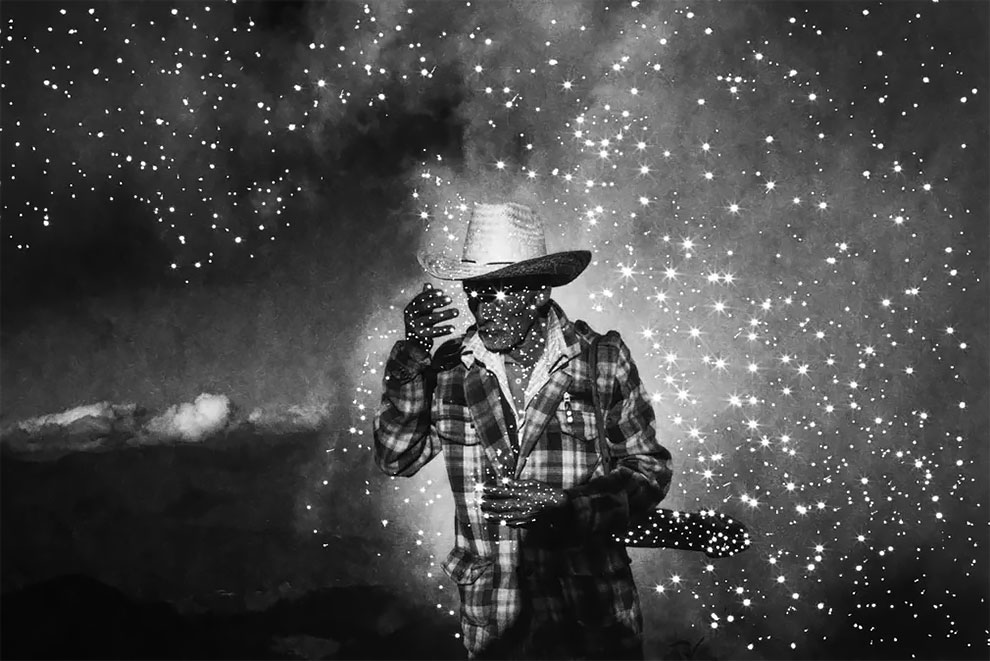 Abuelo-Estrella, an elder in the Garza hill, Mexico. For the Na Savi people, elders are respected since they contain wisdom and connection with ‘mother earth’. Every 31 December, the Na Savi indigenous communities climb the Cerro de la Garza to perform rituals that commemorate the end and beginning of a cycle. Photograph: Yael Martínez/Magnum Photos/c/o World Press Photo 2022

Regional winner (Africa), open format: The Longing of the Stranger Whose Path Has Been Broken 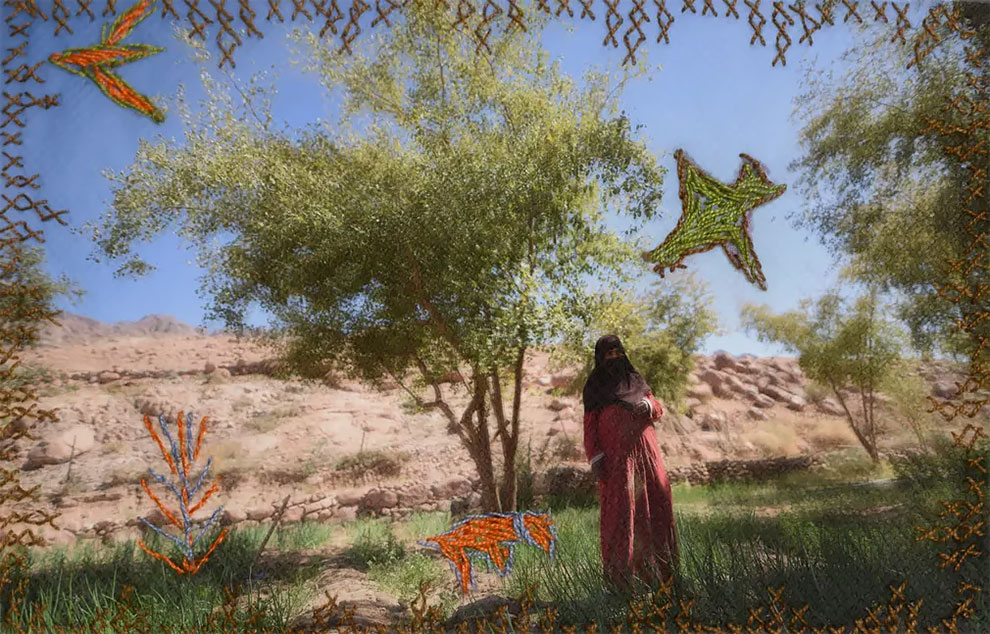 An embroidered photograph of Hajja Oum Mohamed, 53, in her garden in Gharba Valley. Embroidery by her. Photograph: Rehab Eldalil/c/o World Press Photo 2022 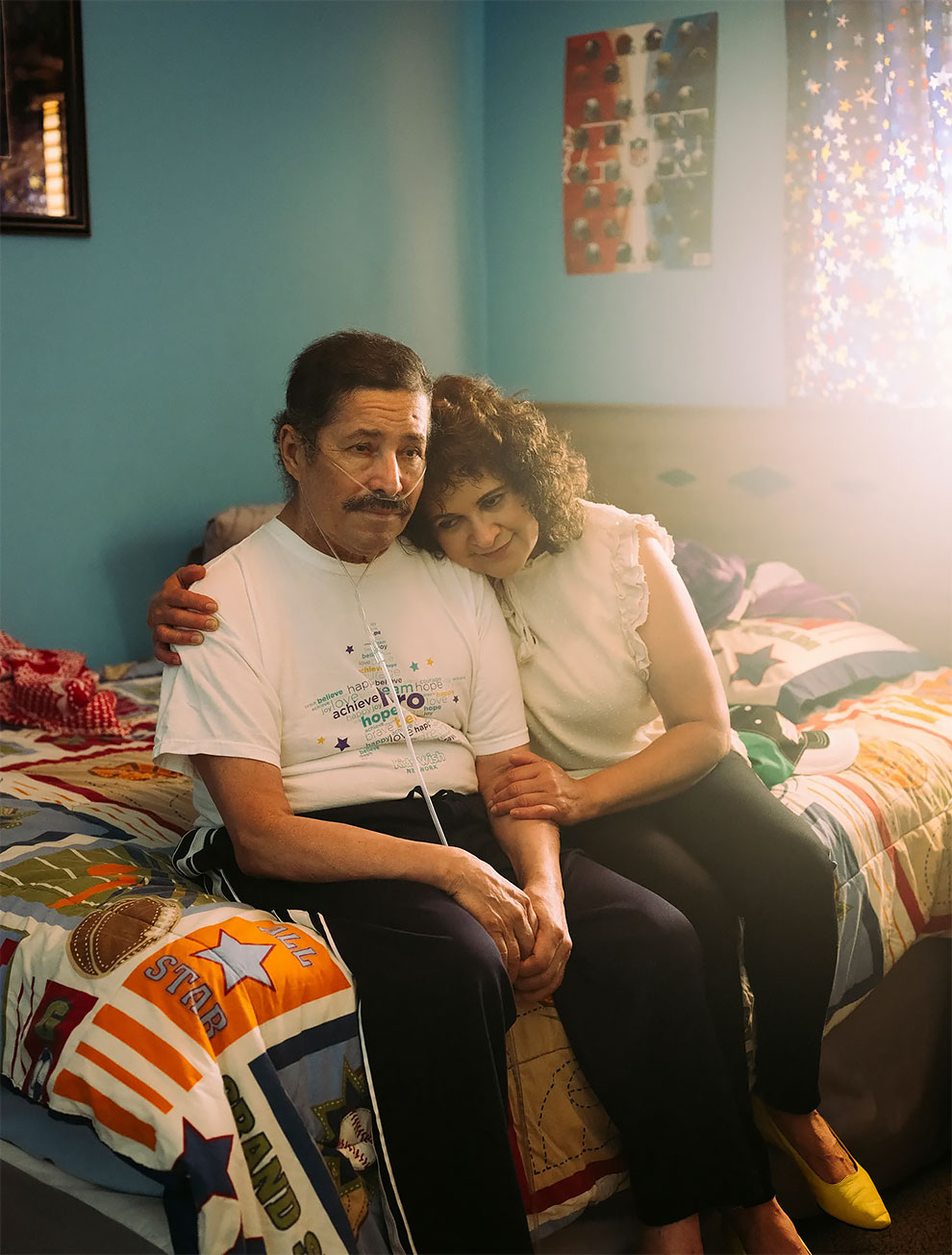 José sits in his room with his sister, Sara, in Sioux Falls, South Dakota, US, in September 2020. Jose worked in a meatpacking plant until contracting Covid in April 2020. He was in the hospital on a ventilator for five months, and still uses an oxygen cylinder. Sara also worked at the factory, but left to become a house cleaner. She took care of her brother during his illness. Nationally, immigrants make up 37% of the meat industry labor force. During the pandemic, meatpacking plants remained open as they were considered critical infrastructure. The coronavirus spread quickly in an industry where workers operated in close proximity to each other. Photograph: Ismail Ferdous/Agence VU/c/o World Press Photo 2022 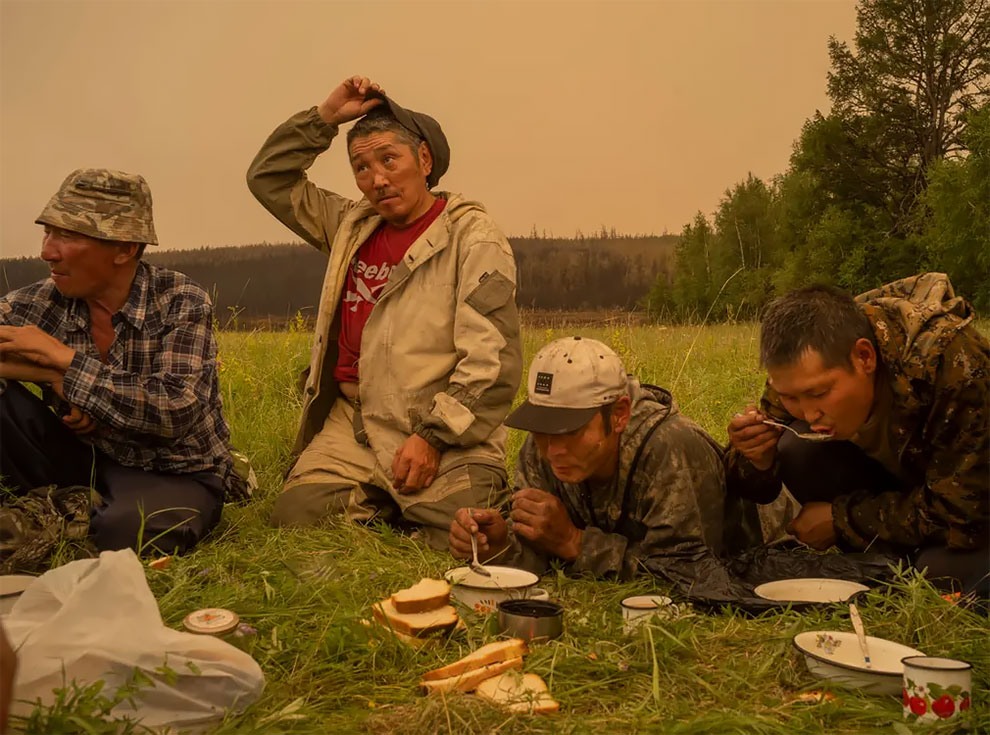 Local firefighting volunteers take a break for food in Magaras, central Sakha, Siberia, in July 2021.Sakha, also known as Yakutia, which extends over more than 3m sq km in the far north-east of the Russian Federation, experienced devastating wildfires, severe smoke pollution, and melting of its permafrost in 2021. By mid-August, more than 17m hectares had been ravaged by fire, according to Greenpeace Russia – larger than the areas burned by fires in Greece, Turkey, Italy, the US and Canada combined. Photograph: Nanna Heitmann/Magnum Photos/c/o World Press Photo 2022 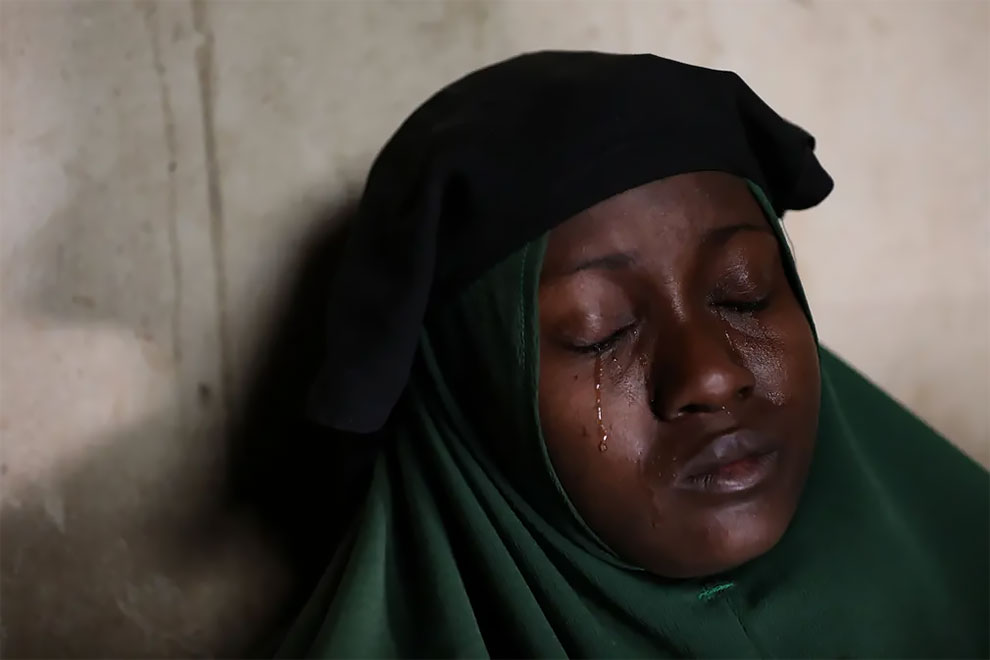 Humaira Mustapha, whose two daughters were kidnapped by gunmen at the government girls secondary school, cries at her home, the day after the abduction of more than 300 schoolgirls in Jangebe, a village in Zamfara state, north-west Nigeria in February 2021. More than 300 schoolgirls were snatched from dormitories by gunmen in the middle of the night on 26 February, in the third known mass kidnapping of students since December. Photograph: Sodiq Adelakun Adekola, Agence France-Presse/c/o World Press Photo 2022 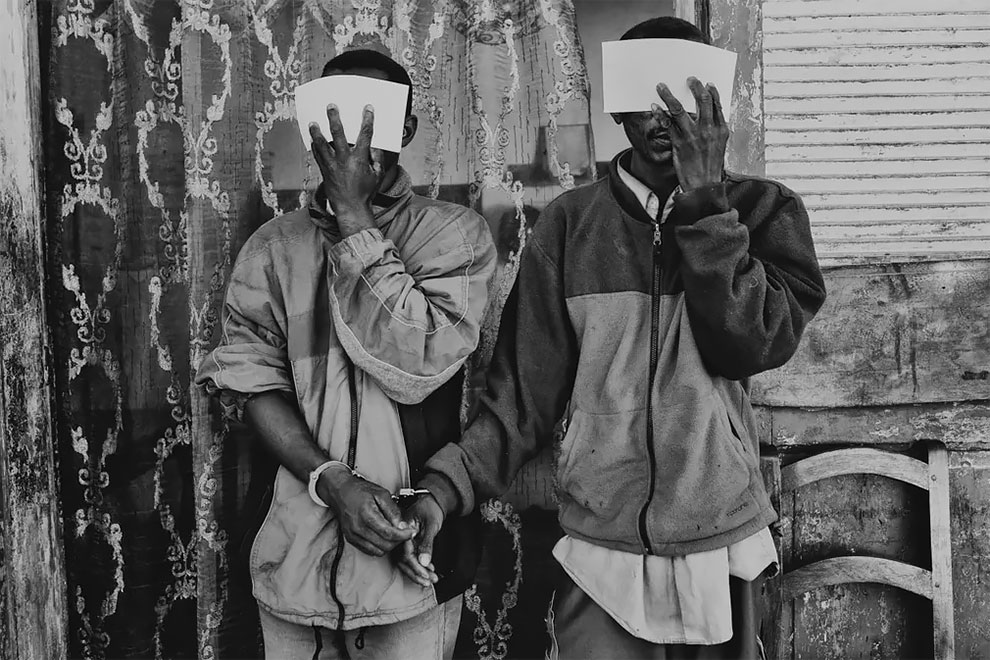 Etosoa Mihary and Tsiry Tam, from the village of Ambatotsivala, considered by authorities to be a zebu-raiding village, stand after being arrested on suspicion of the murder of an inhabitant of neighbouring village in Amboasary Sud, Madagascar, in June 2014.For decades, the rural population of southern and western Madagascar have faced violence and the daily theft of their zebu, highly prized humped cattle, by groups of men called dahalo (roughly translated as ‘bandits’). Government intervention against zebu theft has been harsh, and in 2014, Amnesty International accused Malagasy security forces of indiscriminate acts of violence. Photograph: Rijasolo/c/o World Press Photo 2022 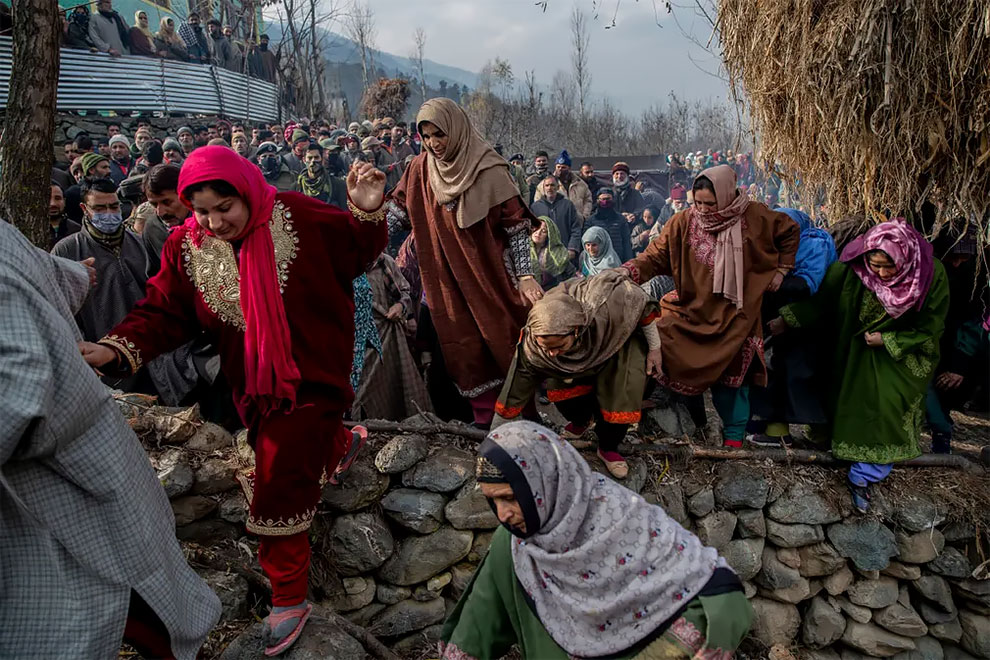 Kashmiri women cross a stone wall to join the funeral of Rameez Ahmad, a police officer killed in a gun attack, in Yachama, north-east Srinagar in Indian-controlled Kashmir in December 2021.Violence and unrest continues in Kashmir as a result of a dispute between India and Pakistan that dates back to independence from Britain and partition of the region in 1947. Both nations claim Kashmir in its entirety. Photograph: Dar Yasin/AP/c/o World Press Photo 2022 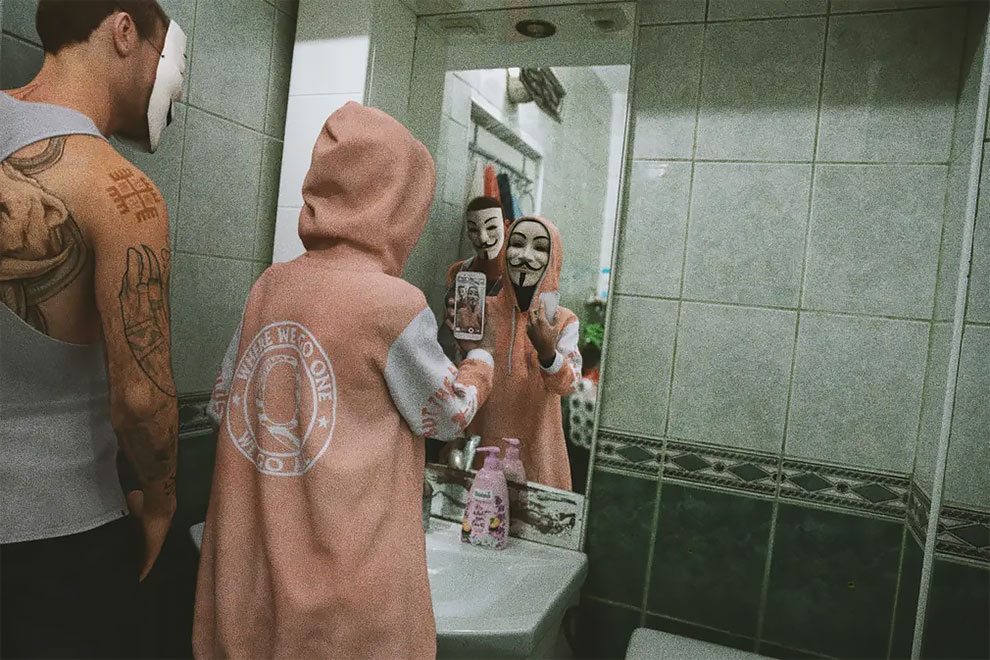 Two fake news producers pose with ‘Anonymous’ masks on (fictional caption). The Book of Veles was published in April 2021 as a documentary project on the production of fake news in Veles, a provincial North Macedonian town that placed itself on the world map in 2016 as an epicentre for fake news production. Six months after publication, the author, Jonas Bendiksen, revealed that it was a forgery. All the people portrayed are computer-generated 3D models. The backgrounds of the images were made by photographing empty spaces in Veles and converting them into 3D spaces. The project questions the ease at which fake news can be produced, circulated and believed. Photograph: Jonas Bendiksen/c/o World Press Photo 2022 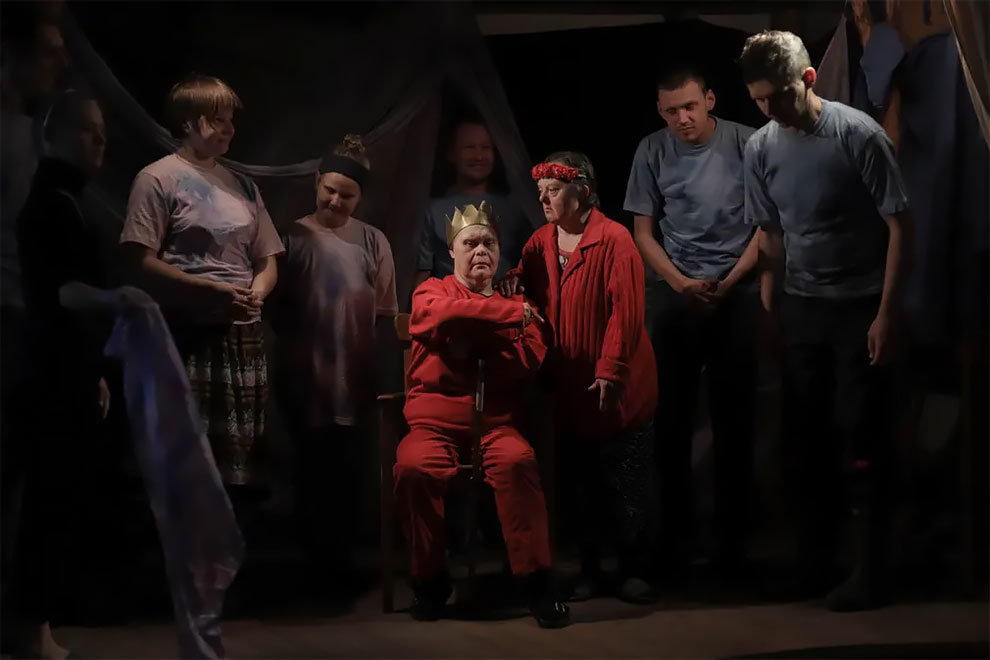 Svetlana residents rehearse for a performance of The Little Prince, with Minya as the King and Tatyana as the Rose, in October 2020.This is an intimate story about the love of a couple – Minya and Tatyana, both in their 50s – with Down syndrome in the social village of Svetlana, St Petersburg, Russia, which is home to people with various mental differences, as well as their mentors and volunteers. Svetlana is not an asylum or a clinic. Every resident is valued as a person, and everyone works for the common good. The photographer has visited Svetlana and stayed there for a few days every two months since 2016, and feels it has become a part of her life. Photograph: Mary Gelman/c/o World Press Photo 2022