Spectacular Winning Images of The Astronomy Photographer of the Year 2022

Some of the winning images from the Royal Observatory Greenwich’s 14th Astronomy Photographer of the Year competition. The selection includes the winning image by Gerald Rhemann, Disconnection Event, a rare photograph of a piece of Comet Leonard’s gas tail being disconnected and carried away by the solar wind. 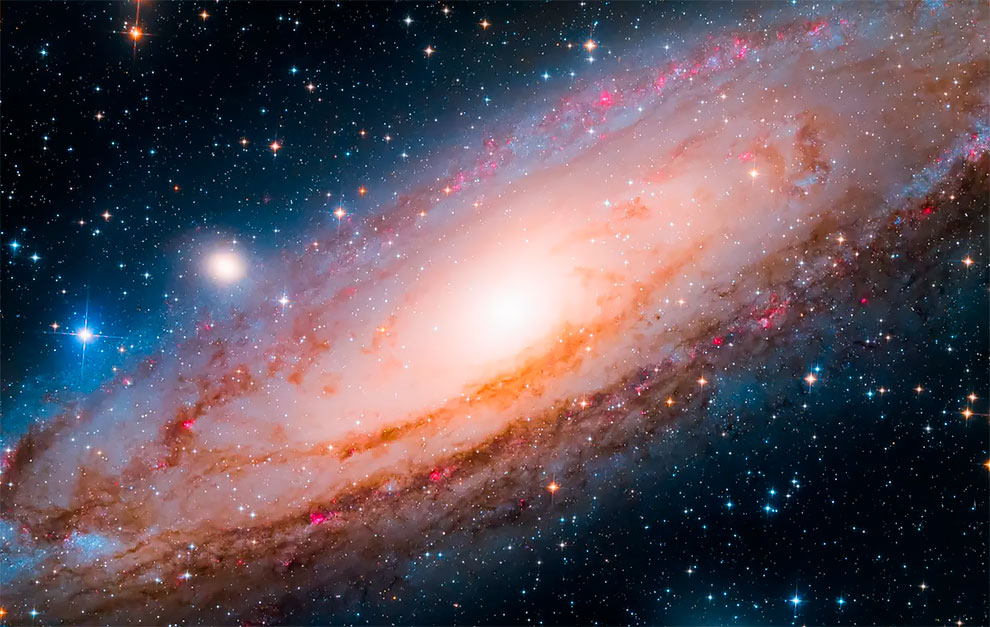 The Andromeda galaxy, or Messier 31 (M31), is one of the closest and the largest neighbour of the Milky Way, and the most distant object the human eye can see. Yang Hanwen provided the original picture of M31.

“From the dark dust lanes to the HII regions, this young photographer has expertly bought out the galaxy’s stunning details to produce a vibrant image” – Melissa Brobby

More: The Astronomy Photographer of the Year h/t: guardian

Comet Leonard was discovered by GJ Leonard on 3 January 2021. It made its closest pass on 12 December 2021 and, having left the solar system, won’t be seen from Earth again. On 25 Dec 2021, a dramatic tail disconnection event happened. A piece of the comet’s tail was pinched off and carried away by the solar wind.

“Astronomy, myth and art come together beautifully in this shot. It holds great value to scientists, as it elegantly captures a disconnection event” – Imad Ahmed

Winner, our sun category – A Year in the Sun by Soumyadeep Mukherjee 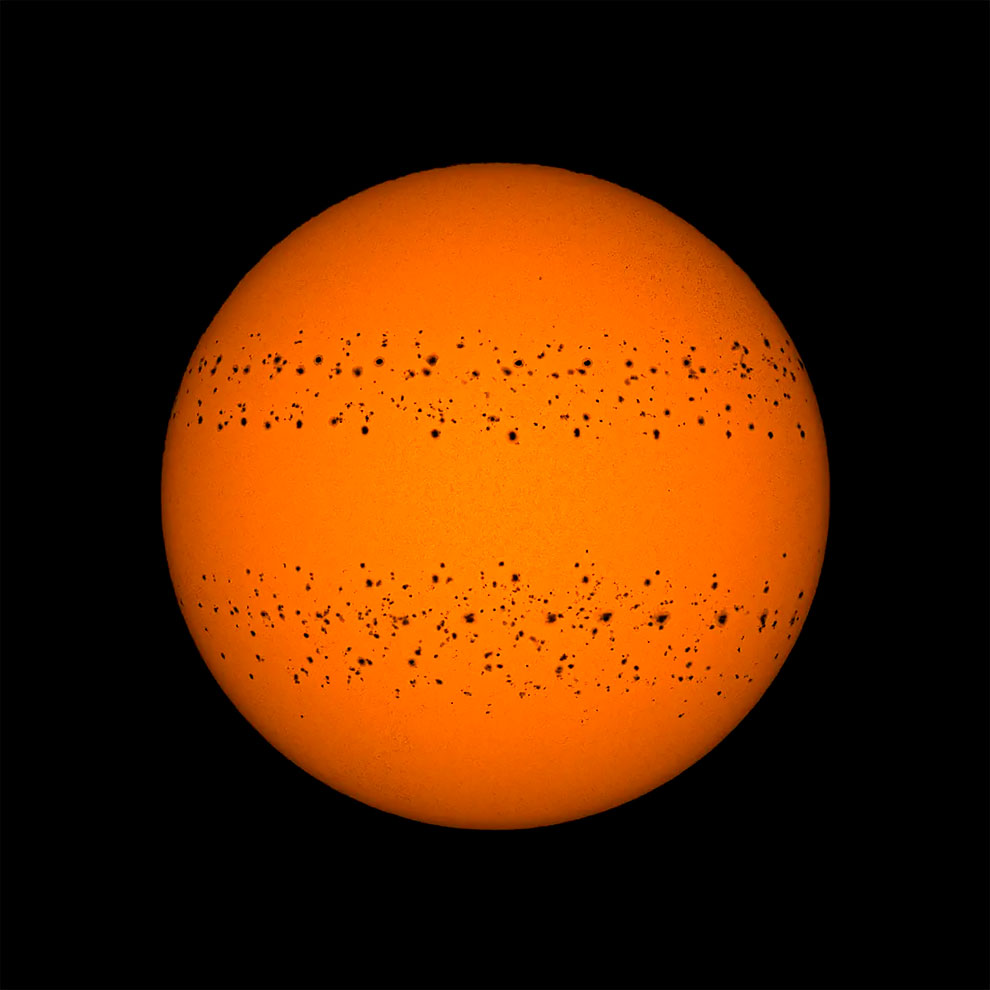 Mukherjee imaged the sun for 365 days between 25 December 2020 and 31 December 2021, missing just 6 days, blending the images to create a single shot. The sunspots create two bands on the solar disc, around 15–35 degrees north and south of the equator, and gradually start drifting towards it.

“The commitment and diligence needed to image the sun every day for a year is a feat within itself. This photographer has achieved a fascinating and unique look at the progression of sunspot bands across its disc” – Steve Marsh

Runner-up, stars and nebulae category – What a Flaming Star! by Martin Cohen, Fareham 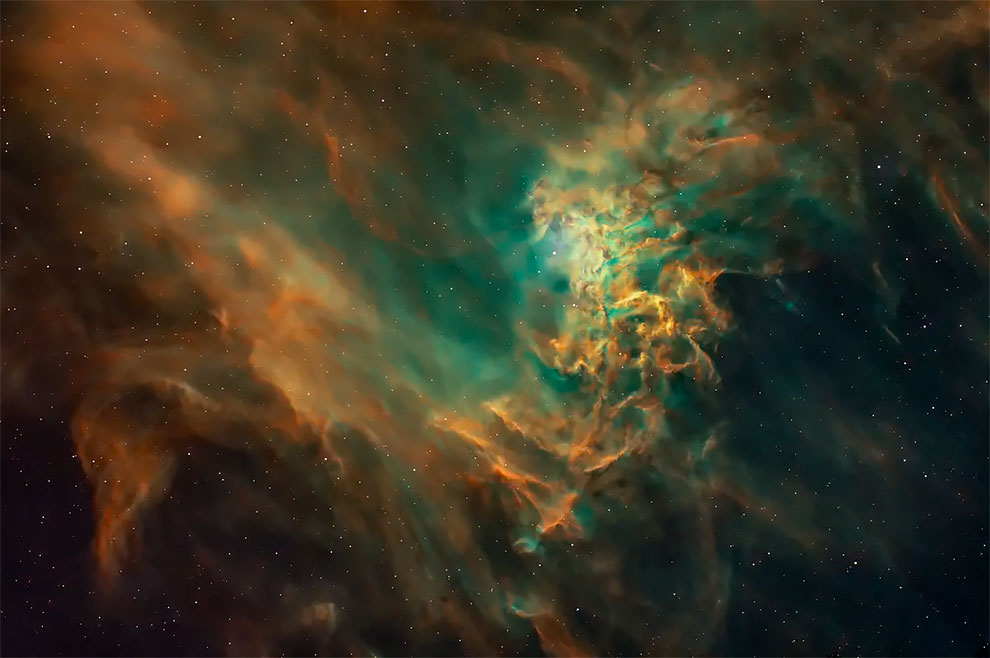 The Flaming Star Nebula (IC 405, SH 2-229 or Caldwell 31) is an emission and reflection nebula in the constellation Auriga, about 1,500 light years from Earth, and is about 5 light-years across.

“A stunning image of a beautiful complex of interstellar clouds of gas and dust illuminated by a hot O-type star. The nebula’s dusty filaments reflect the starlight, producing a variety of shapes and colourful wisps. Masterful processing reveals an almost three-dimensional view of the whole scene” – Yuri Beletsky

Highly commended, our sun category – A Giant in the Sun’s Limb by Miguel Claro 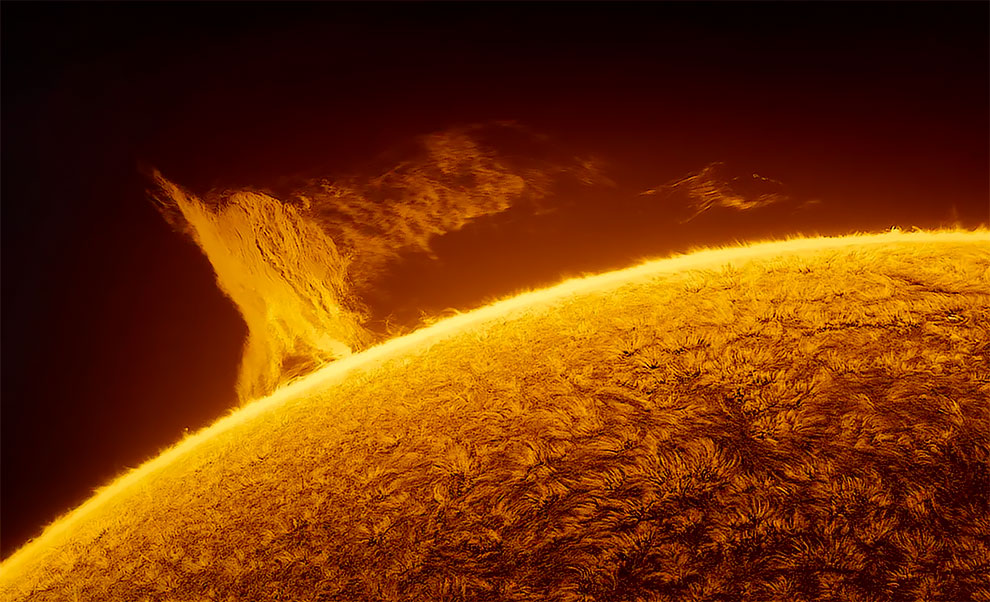 A gigantic solar prominence appears over the chromosphere of the the apparent edge of the sun. This giant was visible for two days in February 2022 and then erupted, throwing a coronal mass ejection into space.

“I loved this image for two reasons. Firstly, for the sheer level detail on the surface of the sun, showing us its gorgeous texture. And then there is the dramatic prominence – masterfully capturing the fiery drama of our very own indomitable sun” – Imad Ahmed

Highly commended, stars and nebulae category – The Centre of the Heart Nebula by Péter Feltóti 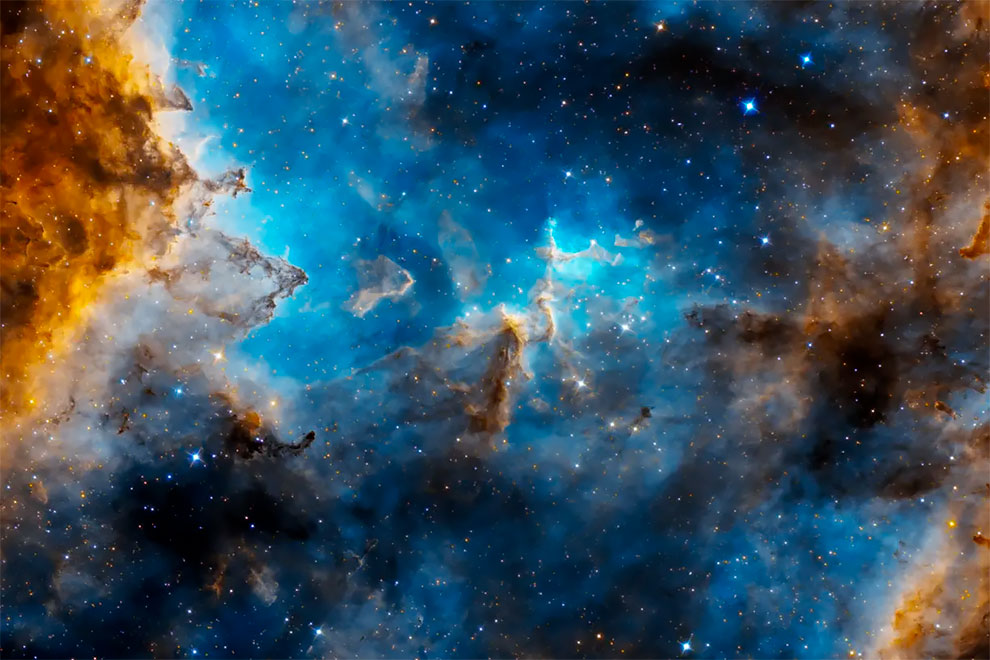 IC 1805 is an area of vast amounts of ionised gas and interstellar dust. The strong stellar wind of the hot stars born here blows the surrounding material outwards, creating a cavelike hollow shape in the parent gas cloud.

“There are many captures of this target, but few appear unique. Stunning details, beautiful contrast of colours and a new composition are what make this image outstanding” – László Francsics 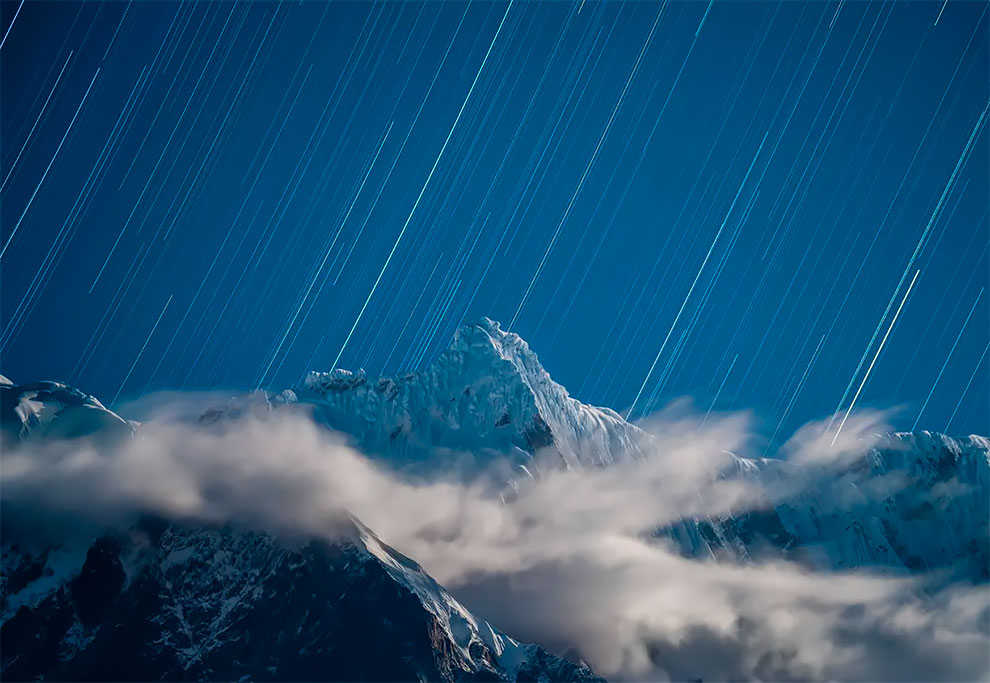 Namcha Barwa is the most beautiful snow-capped mountain in China. The name of the mountain in Tibetan means ‘spear thrusting into the sky’. This untouched land is also home to the purest of starry skies, the trails of which weave a wide net even on full moon days. Namcha Barwa, like a spear, pierces this net.

“I love the juxtaposition of the star trails against the clear peak of the mountain. The motion of the clouds adds to the drama” – Sheila Kanani 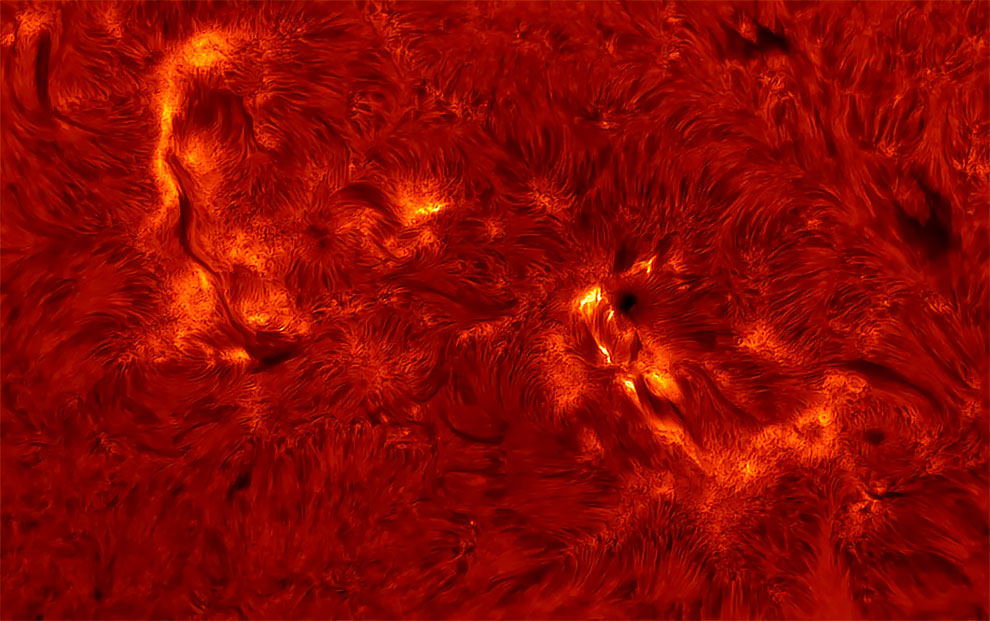 The sun looks different every time astrophotographers capture an image as new sunspots form, grow and eventually fade away. The photographer here selectively filtered out all wavelengths of light except a narrow red band (known as the H-alphaline) to reveal an active region of change in the sun.

“There is something almost terrifying about getting up close and personal with the surface of the sun. Nowhere is this better realised than in the turbulent ferocity of this image” – Steve Marsh

The Milky Way rises above the Minya Konka mountain, the highest peak in Sichuan China, in the early hours of the morning on 21 February 2021.

“The icy, ragged mountaintop is contrasted beautifully with the Milky Way, the lighter pink and indigo hues of which offer us a mesmerising, warm glow. I also have to commend the photographer’s dedication – standing in the snow in freezing conditions – to capture this picture!” – Imad Ahmed

Winner, stars and nebulae category – The Eye of God by Weitang Liang 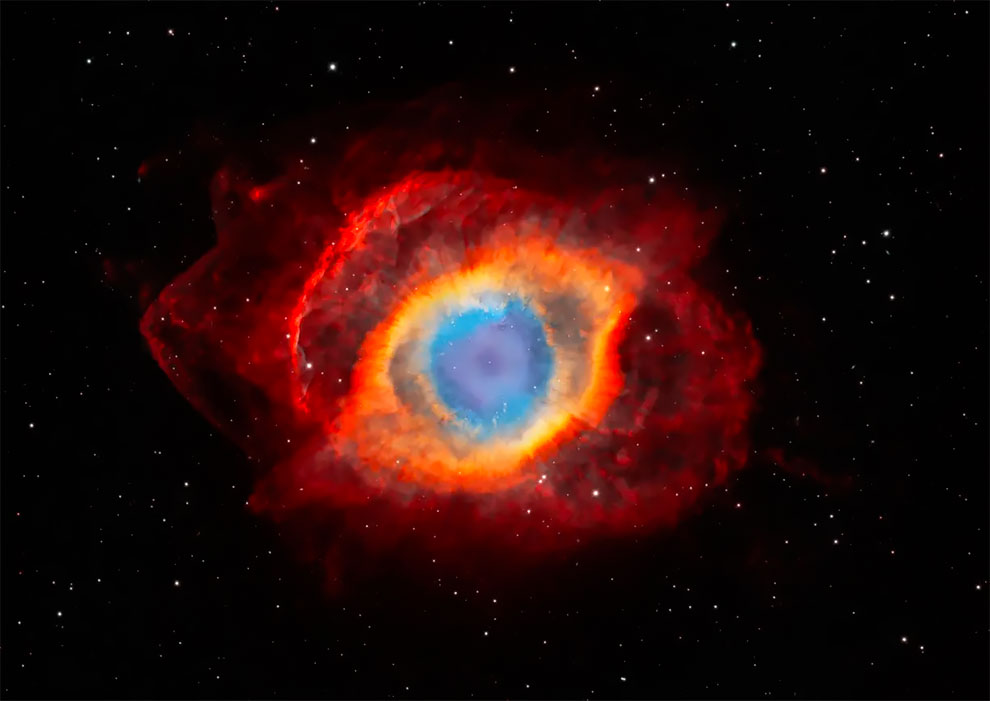 This ultra-deep exposure of the ‘Eye of God’, also known as the Helix nebula, reveals the glorious colours of the core and rarely seen surrounding details. The core appears in purple and cyan, creating an ethereal, dreamy feeling.

“The colours in this photograph make for a stunning composition – from the fiery red to the defiant, moody blue at the centre of the ‘eye’. It’s easy to see how the ancients used to stargaze and imagine that the cosmos was looking back, keeping a watchful eye over us” – Imad Ahmed

Runner-up, people and space category – Back to the Spaceship by Mihail Minkov, Buzludzha 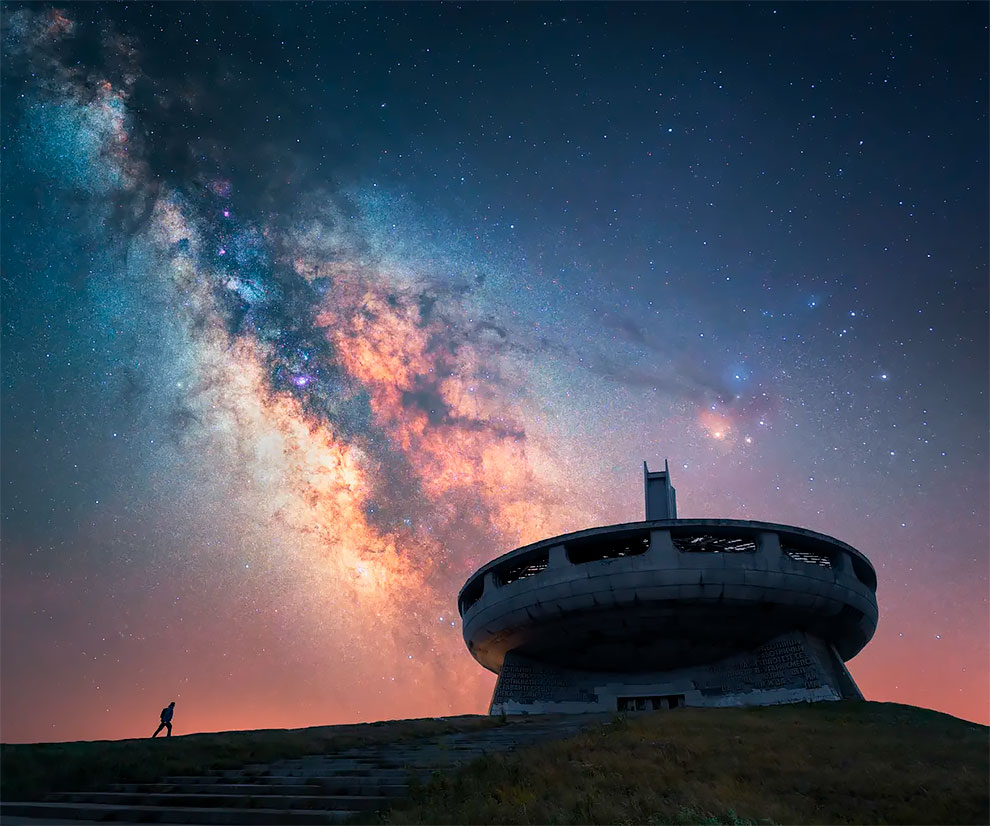 Built between 1974 and 1981, this spaceship-like structure was designed by Georgi Stoilov and involved the removal of more than 15,000 cubic metres of rock from the peak of Buzludzha, reducing the mountain’s height by 9 metres.

“An exceptional image of an iconic brutalist building, perched on the northernmost edge of Bulgaria’s Balkan mountains. The spaceship-like structure, combined with the luminous skyscape and the ascending figure, create an eerie yet calming symphony” – Hannah Lyons

Winner, aurorae category – In the Embrace of a Green Lady by Filip Hrebenda, Hvalnes, Iceland 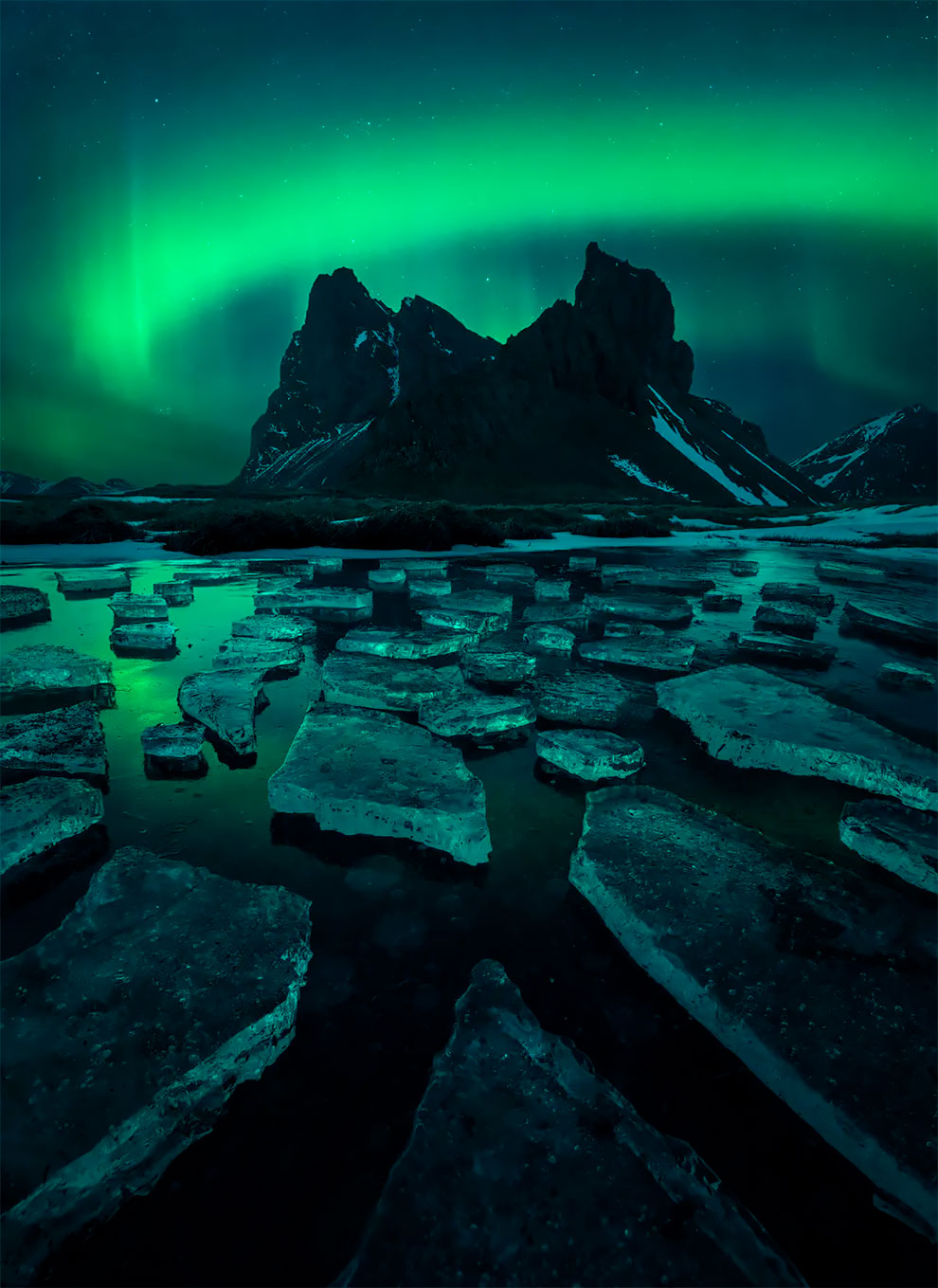 The northern lights are one of the most interesting natural phenomena. Although they are usually shot in the winter months, this photograph was taken during the late spring. It shows the dancing aurora borealis, reflected in a little frozen lake above the Eystrahorn mountain.

“I love this photo because it really sums up aurorae for me: the green swoosh reflected in the icy lake, the clarity of the edges of the ice blocks and the looming shadow of the mountain” – Sheila Kanani 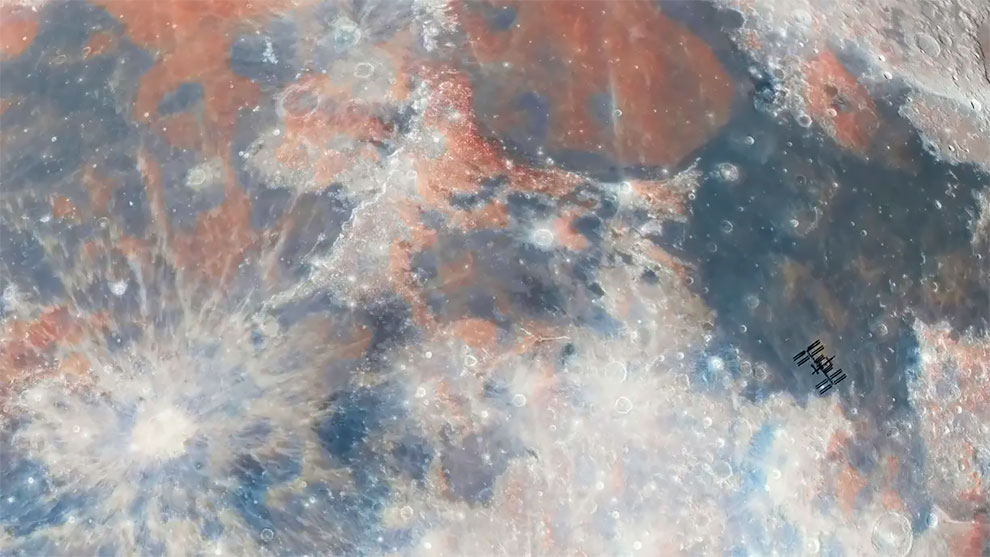 The ISS positioned directly over the Apollo 11 moon-landing site in the Sea of Tranquility. The moment only lasted a handful of milliseconds and required precise positioning to capture the pass at the perfect time. 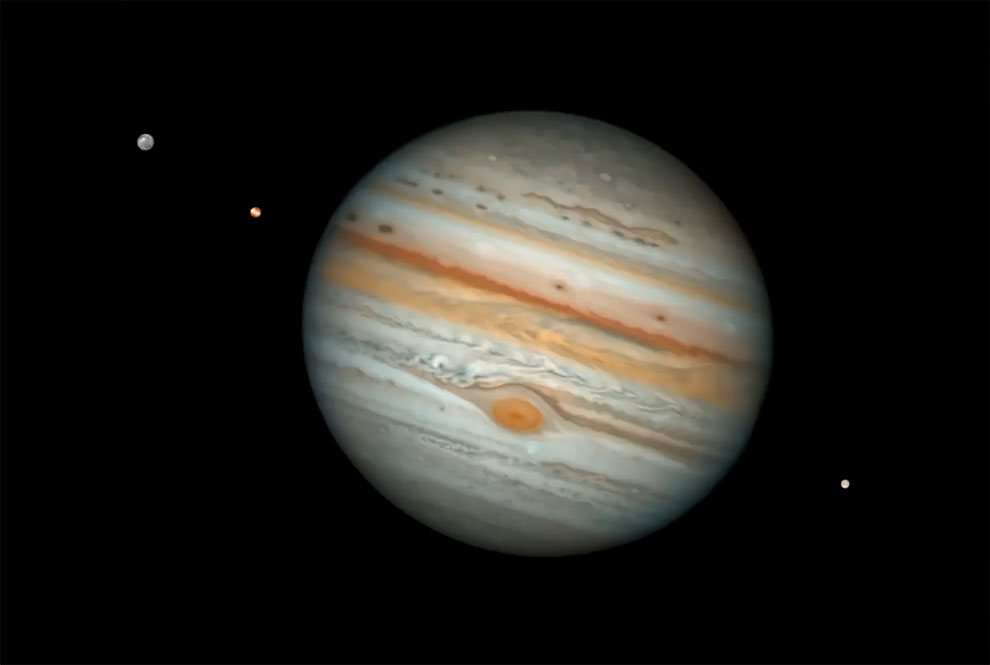 Here Jupiter can be seen alongside three of its largest moons. The famous red spot is clearly visible on the planet, along with many other spots and storms. Similar details are also evident on all three Jovian moons. The bright ray crater Osiris can be seen on the moon Ganymede at the upper left.

“Not only has the photographer shown the vibrancy of the colours in Jupiter’s turbulent upper atmosphere and Galilean moons in orbit, but also colour and detail on the moons themselves” – Ed Bloomer 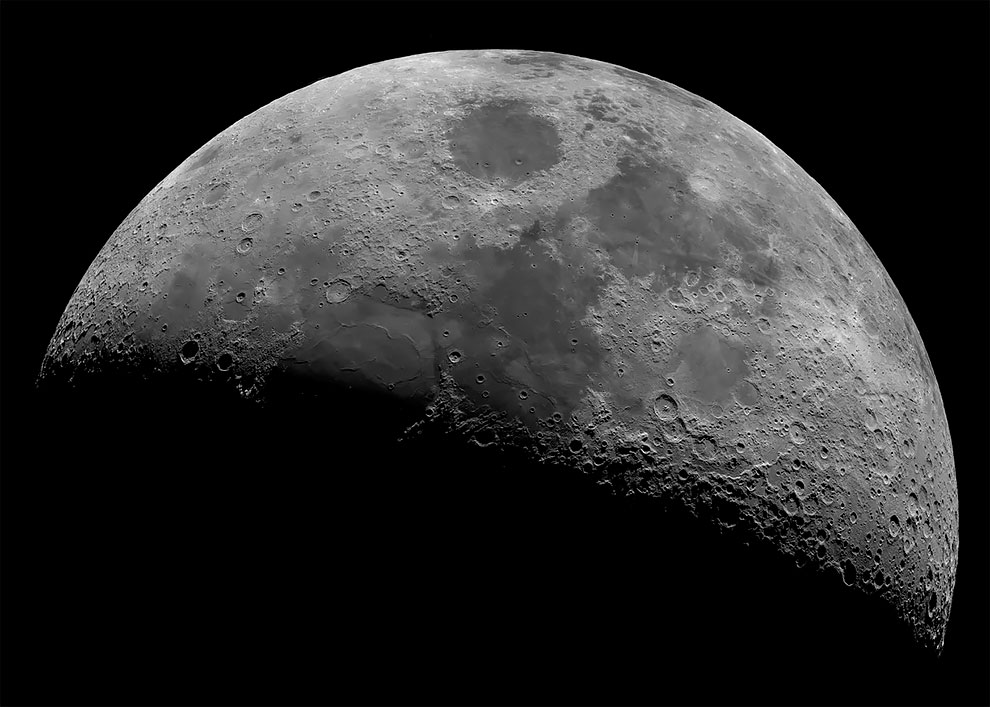 This is a 32-panel mosaic of the crescent moon. In this image you can see the most famous craters, rims, mountains, domes and seas of this lunar phase.

“The creation of mosaics is a popular aspect of lunar astrophotography, yet the immense amount of work that goes into one can never be overstated. This mosaic goes a step further with perfect processing and balance of light and dark shades from terminator to limb” – Steve Marsh 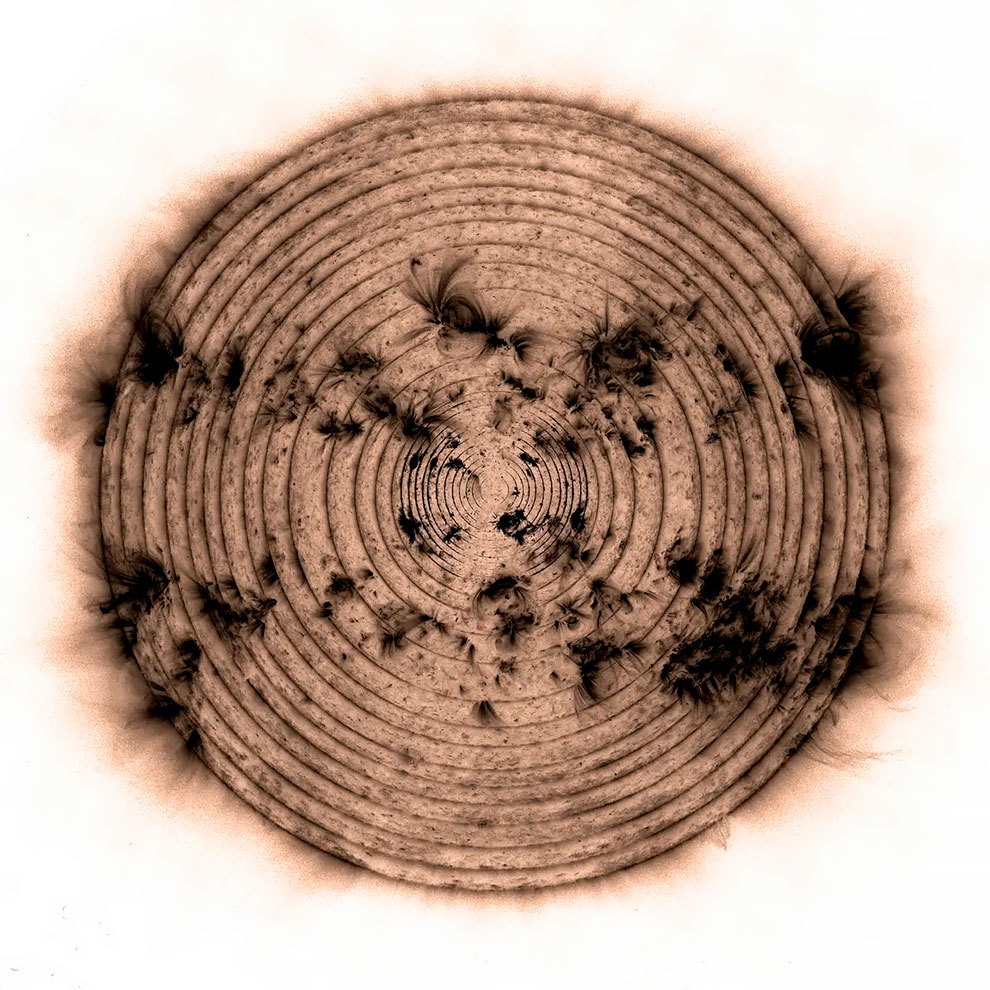 The making of this work derived from Woolley’s research into carbon-14 traces found in some studies of tree-ring dating or dendrochronology. Twenty-six images of the sun from the first part of Solar Cycle 25 have been layered to create concentric rings. The oldest ring lies in the centre, while the most recent sits furthest away. 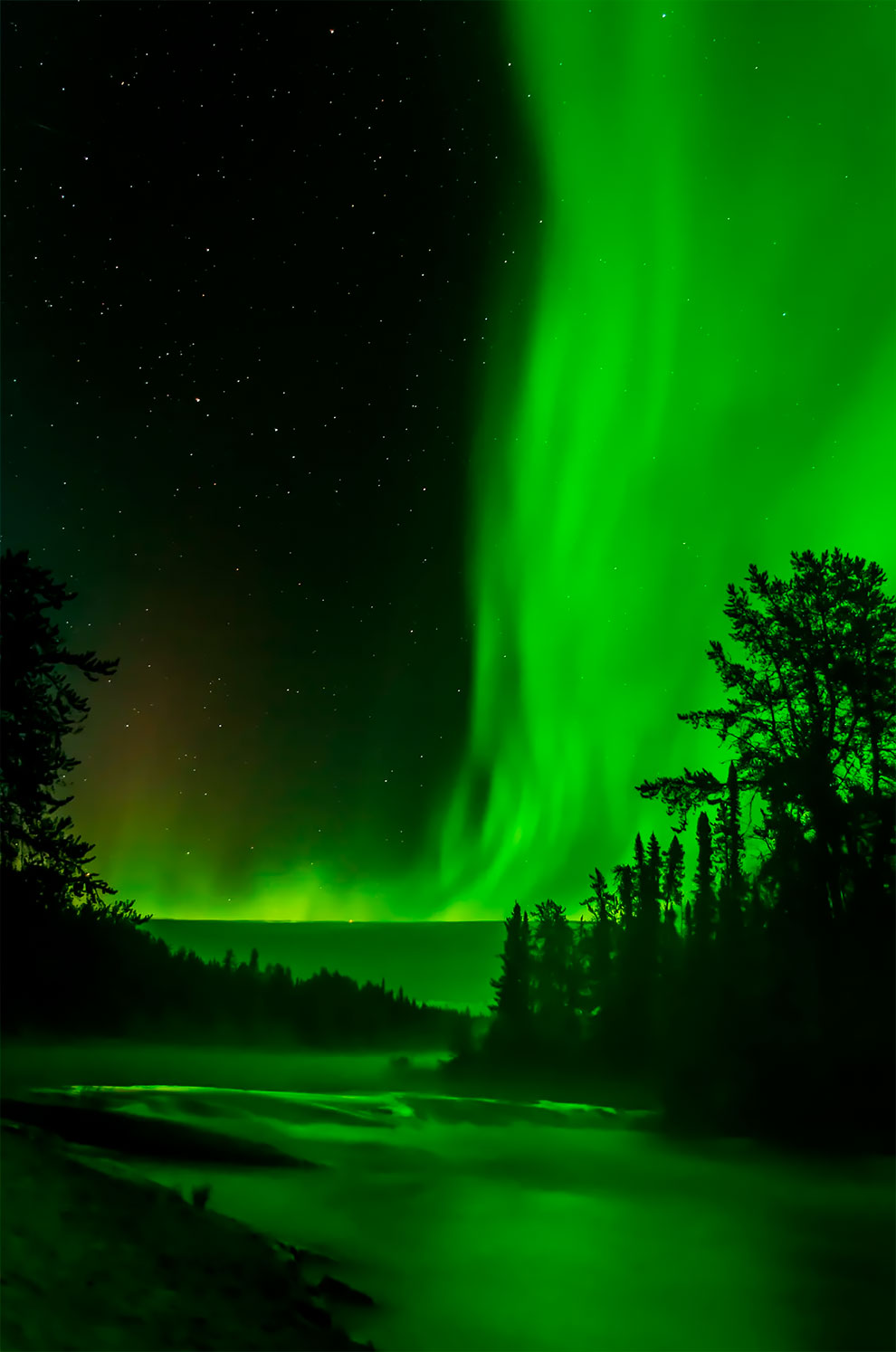 Captured over the Cameron River in Canada’s Northwest Territories, this shot points up the contrast between the aurora and the dark sky.

“I loved the composition of this shot, balancing motion and stillness. The aurora appears to be arrested and held in the middle of the sky, only to pour down onto the trees and into Cameron River below” – Imad Ahmed 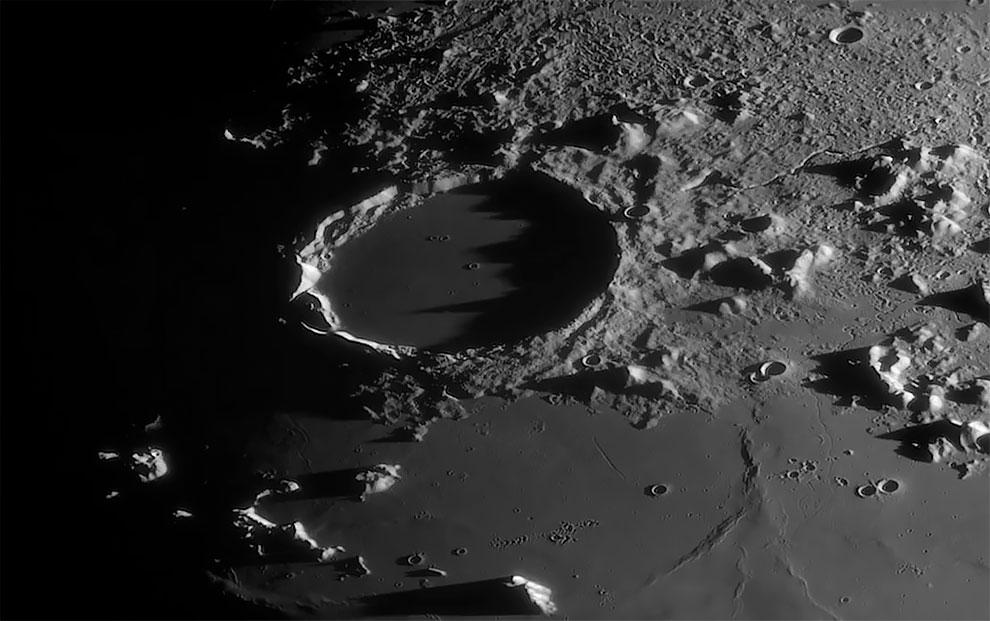 Once a month, the sun rises over the giant lunar crater Plato and casts huge shadows from its east rim across its lava-filled floor. Occasionally this event coincides with a night of good visibility.

“This close-up of the Plato crater has become one of my favourite photographs of the moon. This image of the east rim being hit by the sun’s rays is wondrously unique and proves that, no matter how often we look at the moon, it always has many more wonderful sights for us to observe” – Melissa Brobby 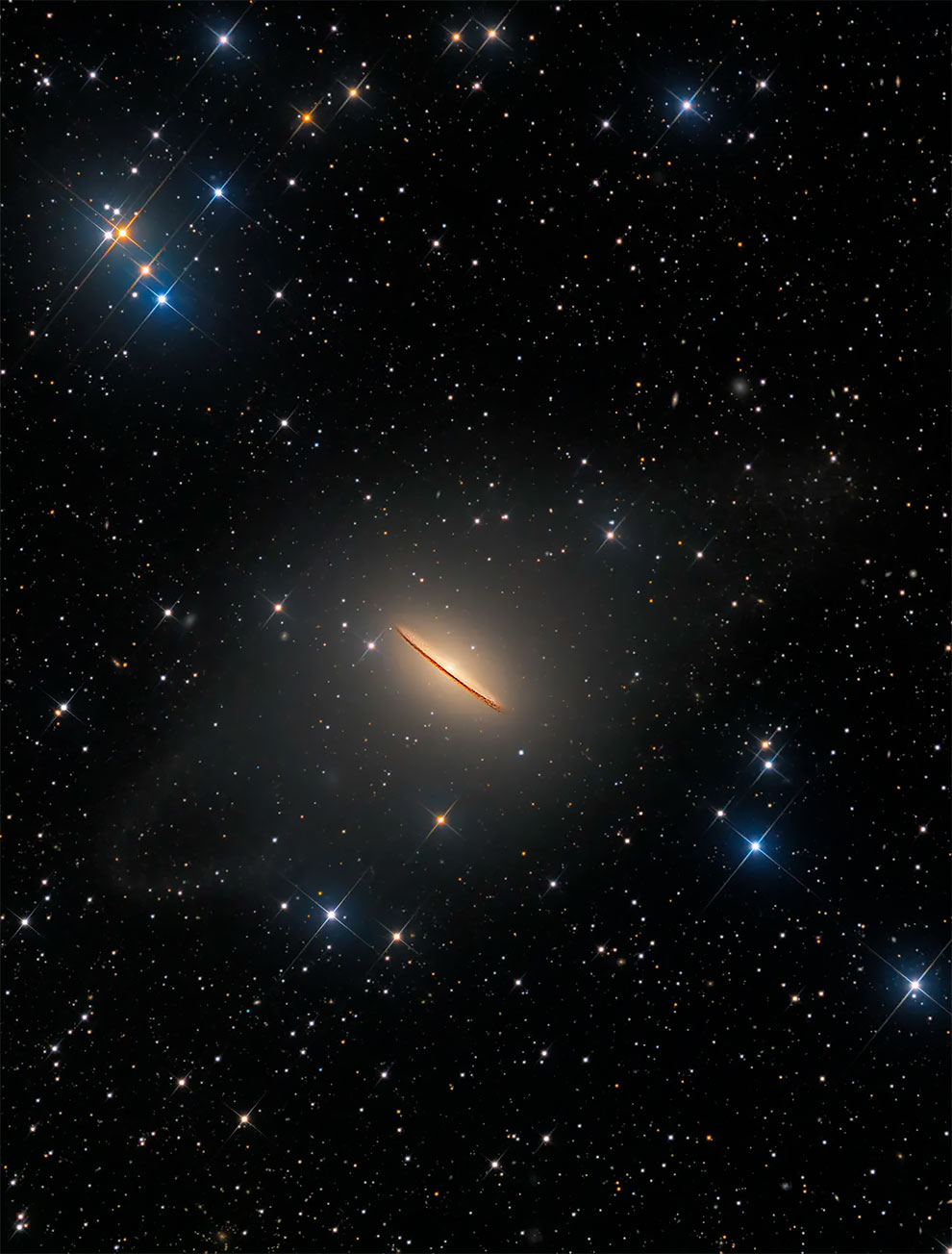 A shot of the faint star streams that were created when a smaller galaxy collided with, and its remnants then began to orbit, the Milky Way. Photograph: Utkarsh Mishra, Michael Petrasko, Muir Evenden

“The Sombrero is a well-documented galaxy, yet astrophotographers still find ways to tease more majesty from it. To see the misty remnants of previous collisions surrounding the galaxy, itself floating alone in the void, is just exquisite” – Steve Marsh 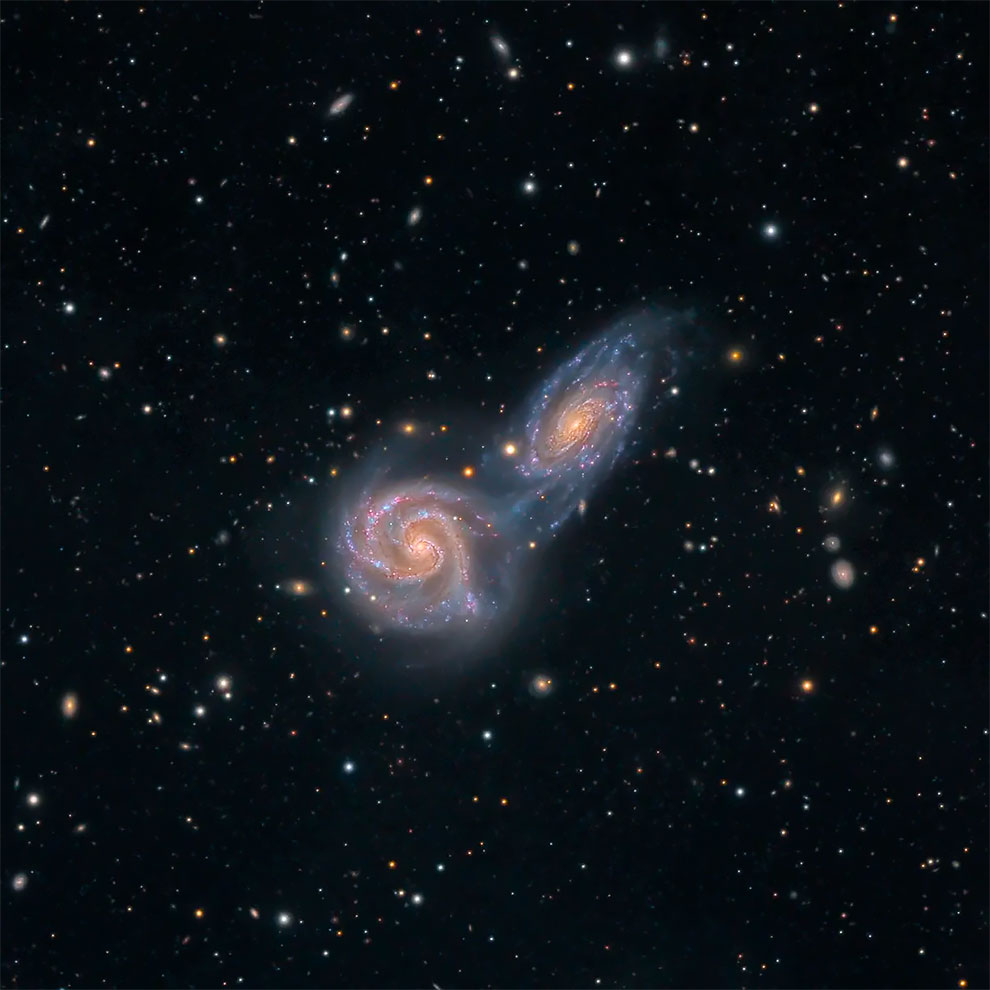 NGC 5426 and NGC 5427 are two spiral galaxies of similar size engaged in a major interaction. Known collectively as Arp 271, the interaction is expected to continue for tens of millions of years. Photograph: Mark Hanson and Mike Selby

“The scale of this picture boggles the mind. The vast size of each of these spiral galaxies is almost beyond comprehension, yet here they are presented in a single stunning photograph, appearing almost to be playing with each other” – Imad Ahmed