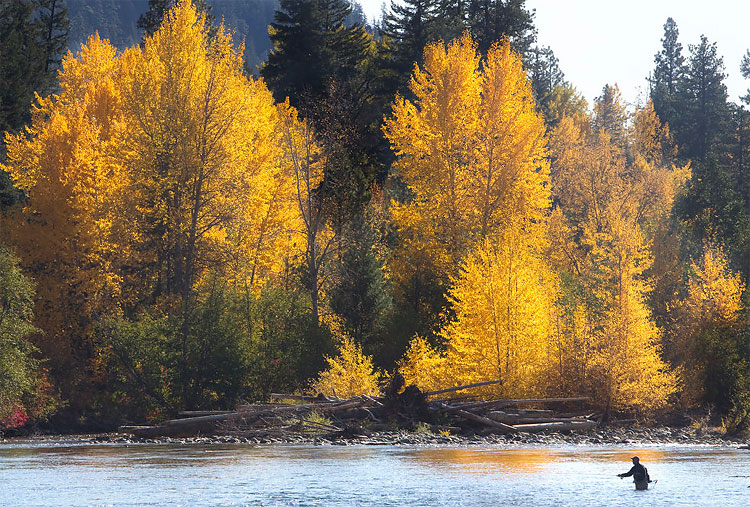 A fly fisherman tries his luck in the Naches River against a backdrop of autumn color near Cliffdell, Wash. Oct. 24, 2011. (Yakima Herald-Republic / Gordon King) 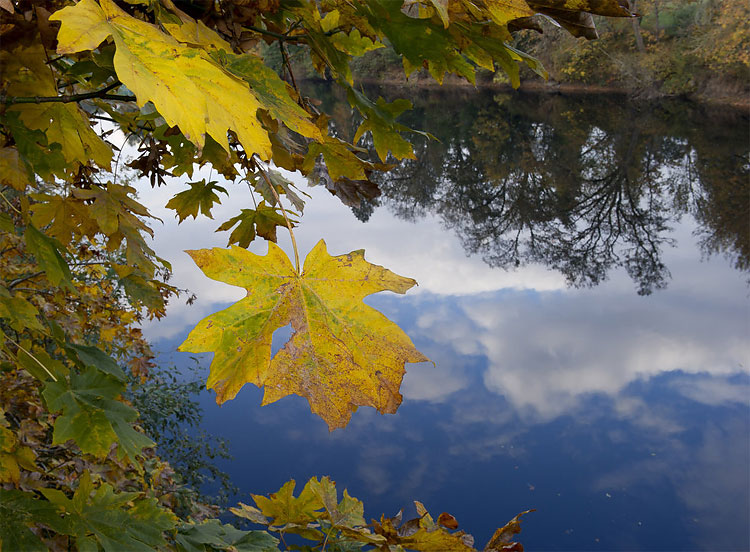 Fall leaves show their colors along the reflective glassy surface of the South Umpqua River in Roseburg, Ore. on Nov. 4, 2011. (ZUMA24.com / Robin Loznak) 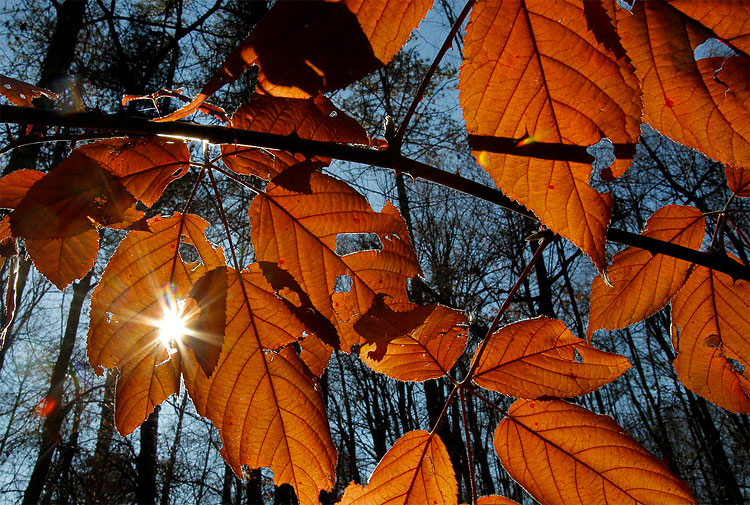 The sun peeks through the last of the fall leaves along a trail in South Chagrin Reservation in Bentleyville, Ohio, on Sunday, Nov. 6, 2011. (AP / Amy Sancetta) 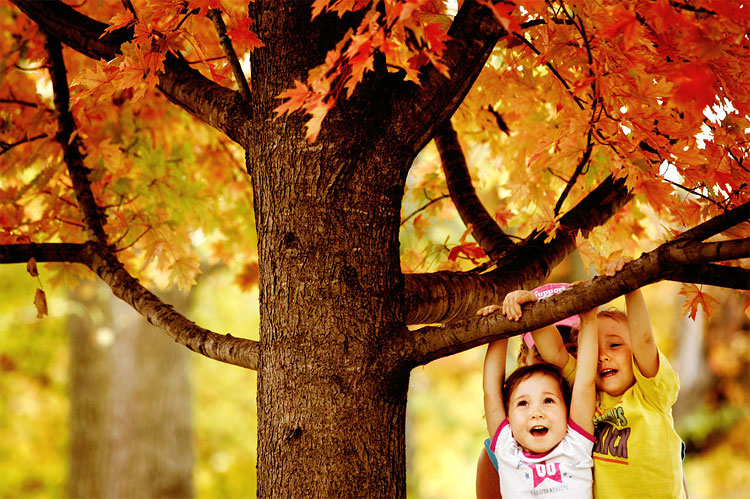 Twins Grace Ann Young, left, and Sophie Mae Young, 2, of Franklin, Ill., are lifted to the bottom branch of a tree by their great-aunt Sherry White on Oct. 25, 2011. (Jacksonville Journal-Courier / Nick Turner) 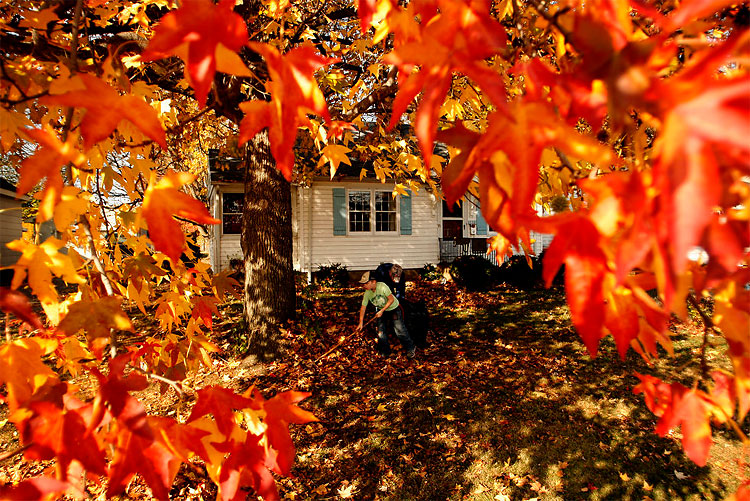 Eddie Autery bags leaves for his neighbor in Jacksonville, Ill., who is recovering from surgery, with help from his grandson Ryan Greer, 8, who is visiting from Des Moines, Iowa on Nov. 5, 2011. (Jacksonville Journal-Courier / Robert Leistra) 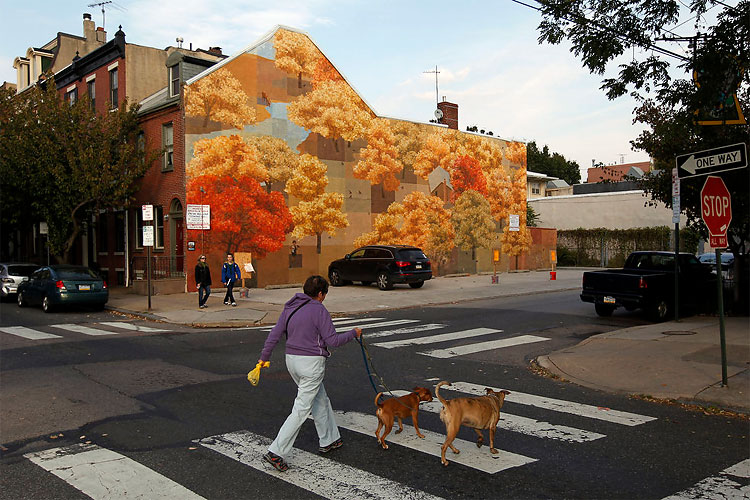 A woman walks her dogs past a mural titled “Autumn” by David Guinn Monday, Oct. 24, 2011, in Philadelphia. Neighbors are trying to preserve the fall-themed mural from planned new construction that would likely block the view of the mural of a small house nestled in a forest of color-changing foliage. (AP / Matt Rourke) 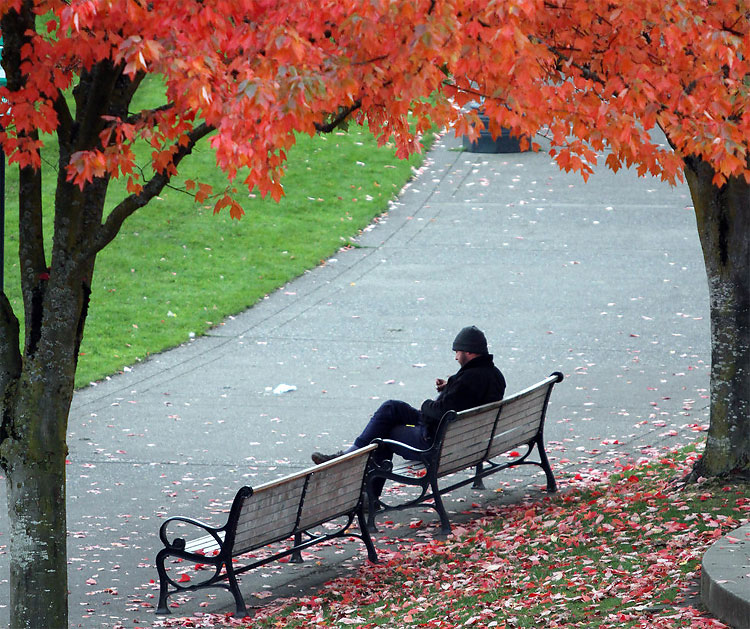 A solitary figure sits on a park bench under a colorful canopy of leaves in Portland, Ore., Wednesday, Nov. 9, 2011 (AP / Don Ryan) 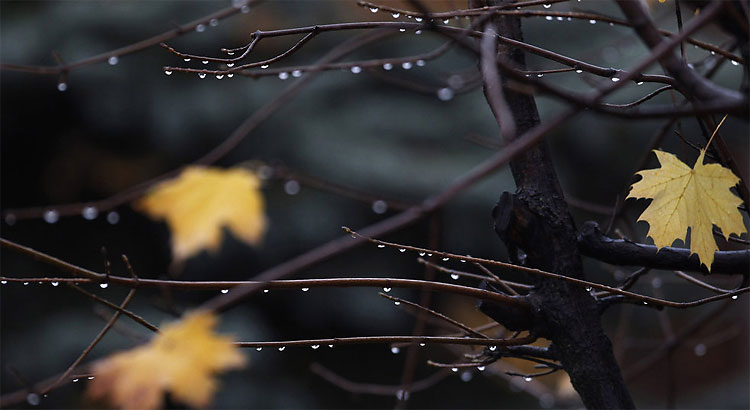 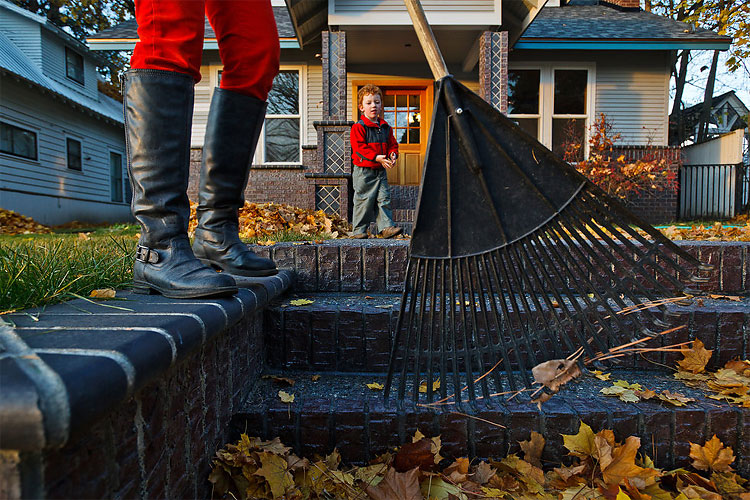 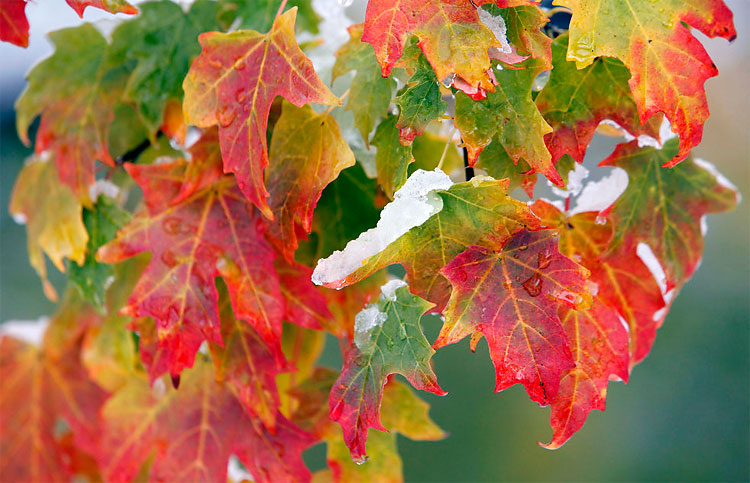 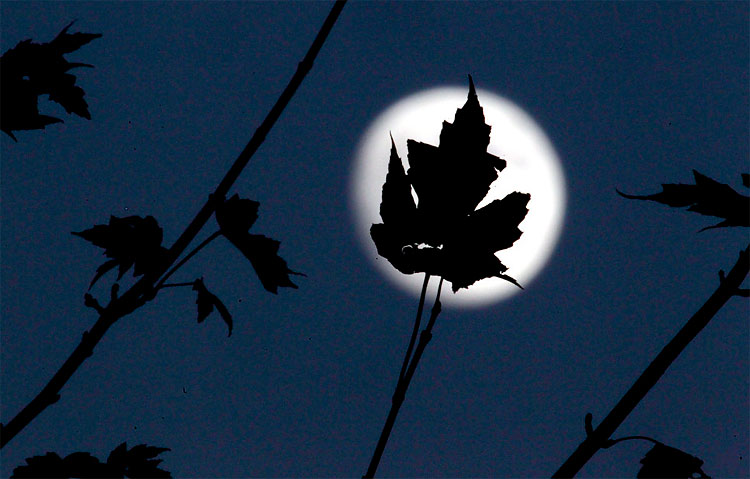 A leaf hangs from a tree at Eagle Rock Reservation with the rising moon in the background on Tuesday, Nov. 8, 2011, in West Orange, N.J. (AP / Julio Cortez) 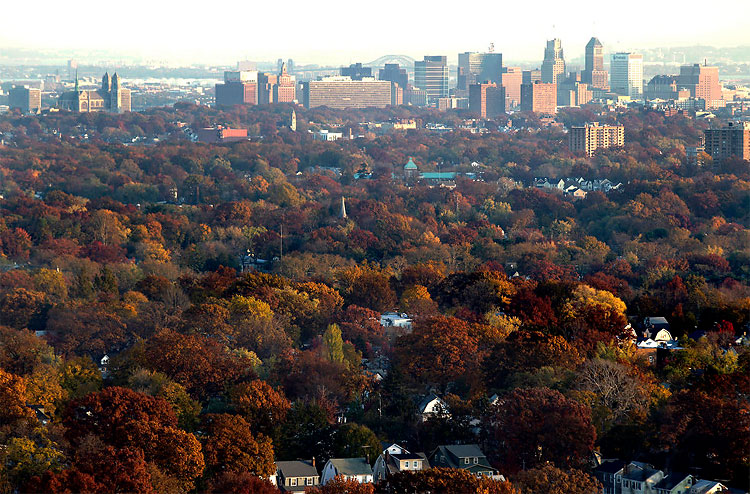 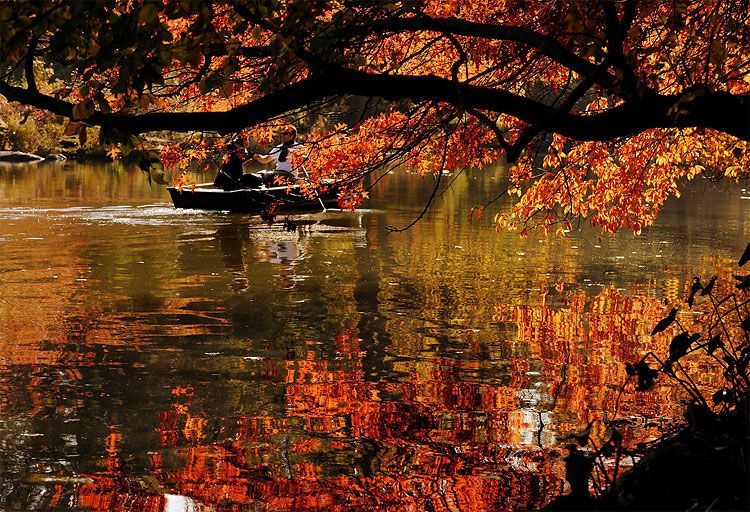 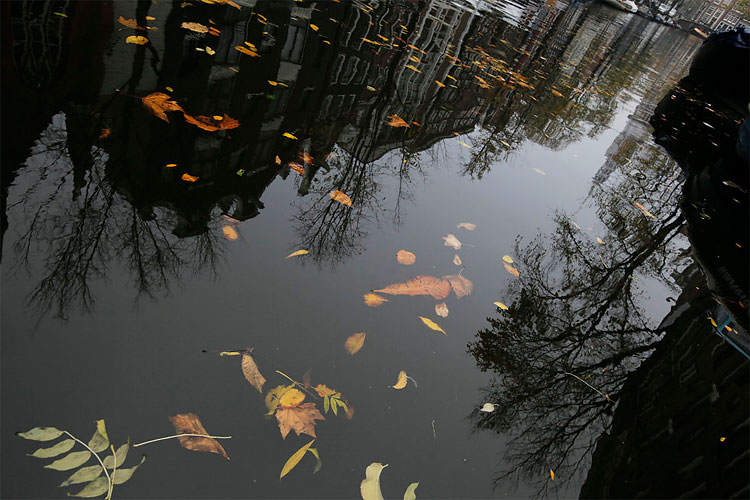 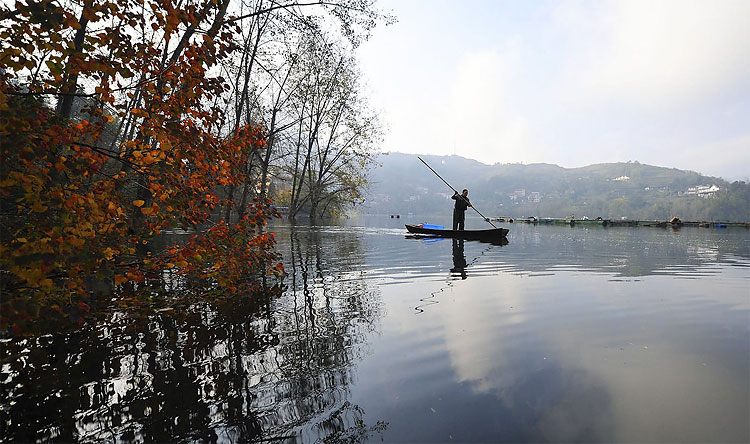 A boatman pushes his craft through the tranquil scenery of Shuanglong Lake, as fall comes to Xuan’en County in Hubei Province on Nov. 10, 2011. (ZUMA24.com / Song Wen) 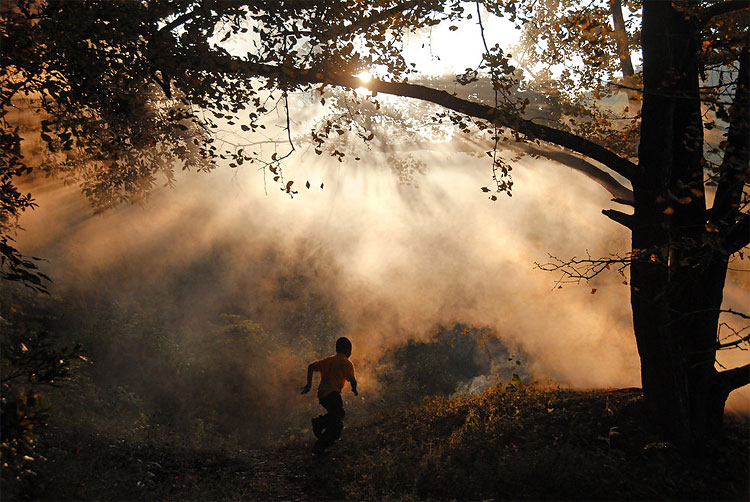 A child runs in woods as light streams through the leaves of trees in the suburb of Nanxiong City on Nov. 8, 2011. (ZUMA24.com / Chen Diqing) 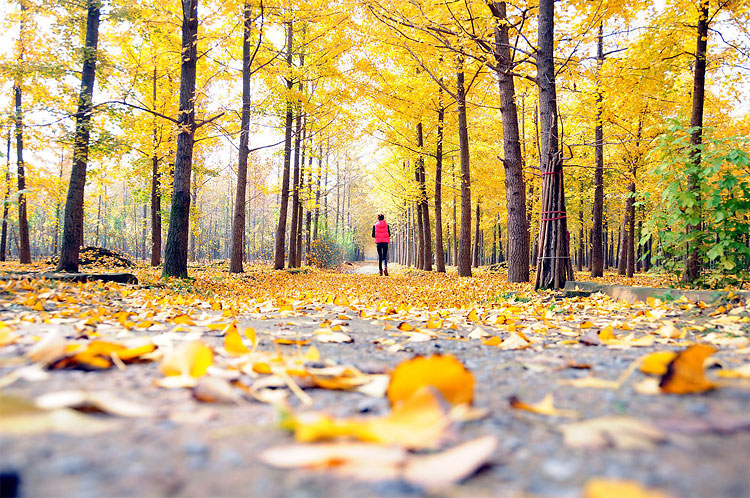 A visitor strolls in a ginkgo wood in Tancheng City, China on Nov. 6, 2011. The beautiful scenery of ginkgo trees in the county attracts tens of thousands of visitors every autumn. (ZUMA24.com / Fang Dehua) 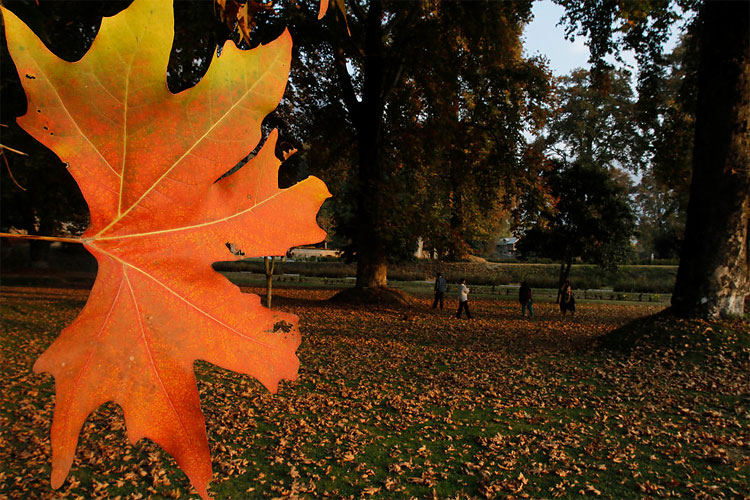 Tourists walk though a garden as partially dried leaves of Chinar trees are seen in foreground on the outskirts of Srinagar, India, Wednesday, Nov. 2, 2011. (AP / Mukhtar Khan) 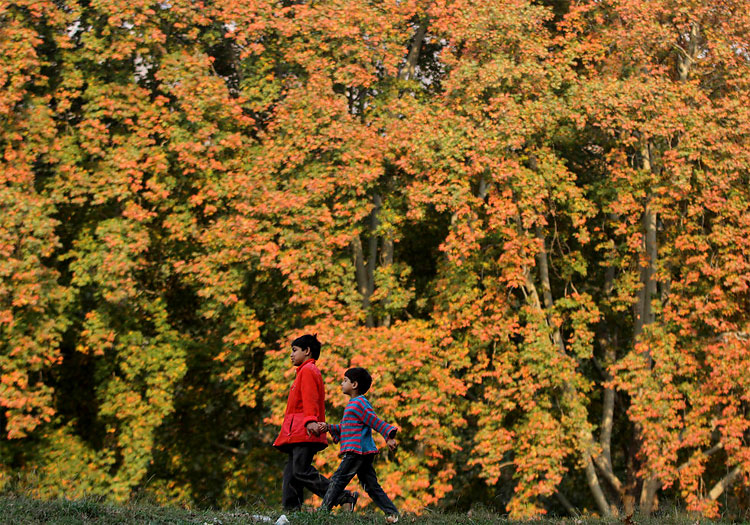 Kashmiri children walk though a garden as partially dried leaves of Chinar trees are seen in background on the outskirts of Srinagar, India, Wednesday, Nov. 2, 2011. (AP / Mukhtar Khan) 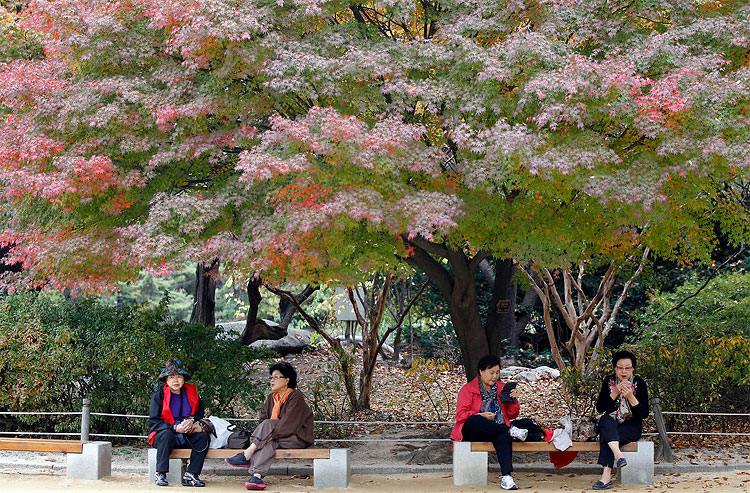 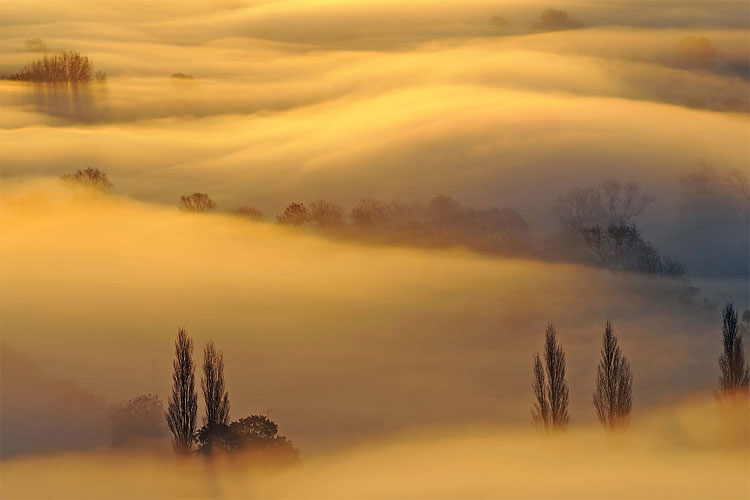 With autumn in full swing, houses are shrouded in fog as a wave of early morning mist sweeps across the Somerset Levels at sunrise in Somerset, England on Oct. 28, 2011. (ZUMA24.com / Stephen Spraggon) 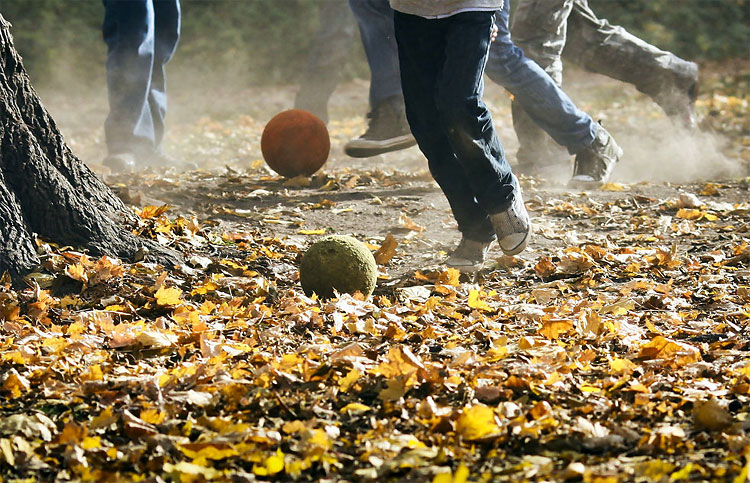 Kids play soccer on a layer of autumn colored leaves at the Guenthersburg park in Frankfurt, Hesse, Germany on Nov. 4, 2011. (ZUMA24.com / Frank Rumpenhorst) 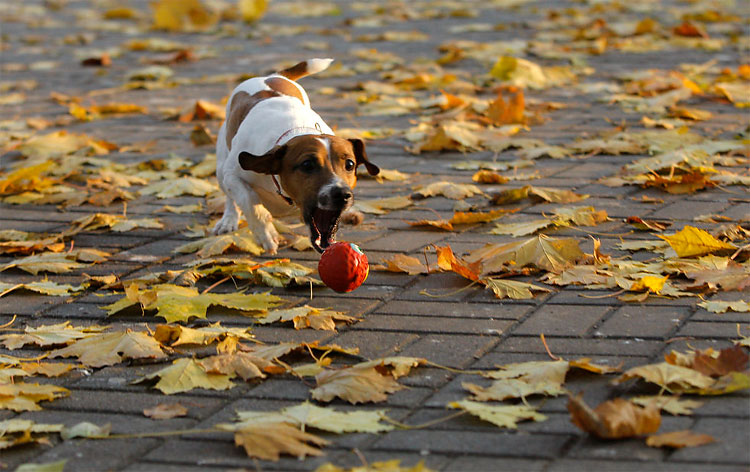 A small dog plays with a ball amongst fallen autumn leaves in a park on a sunny day in the Belarusian capital of Minsk, Tuesday, Oct 25 , 2011. (AP / Sergei Grits) 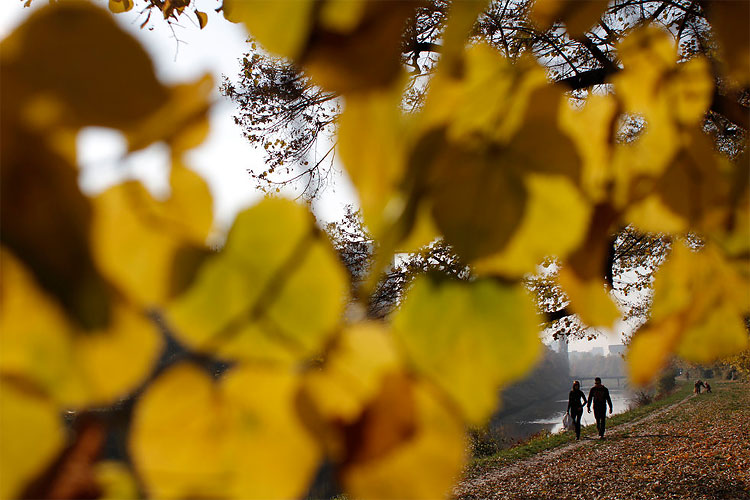 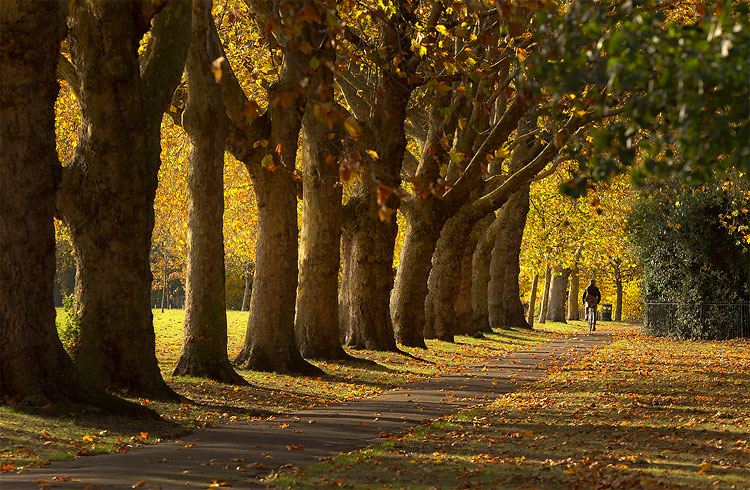 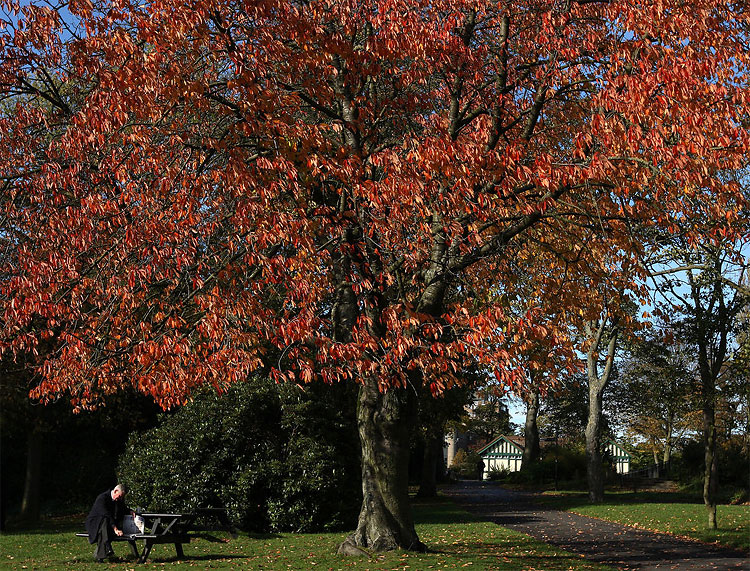 A man enjoys the autumn sunshine while sitting under a tree of red autumn leaves at Leazes Park in Newcastle, England, Friday, Oct. 28, 2011. (AP / Scott Heppell) 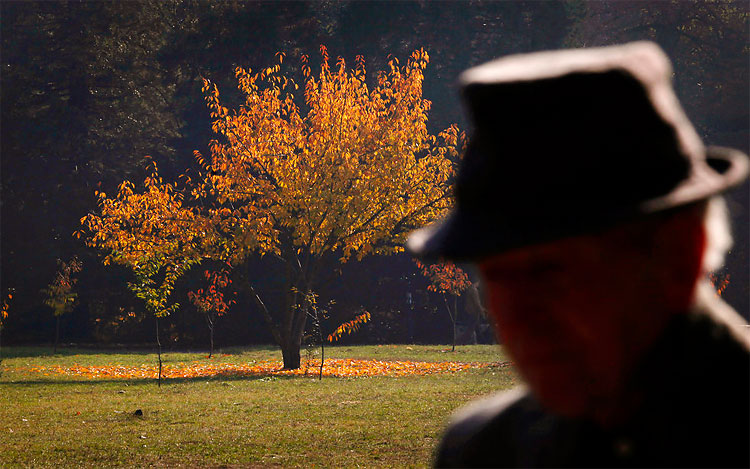 An elderly man is seen in front of seasonal colored trees during a sunny autumn day in Sofia, Bulgaria on Saturday, Nov. 5, 2011. (AP / Valentina Petrova)