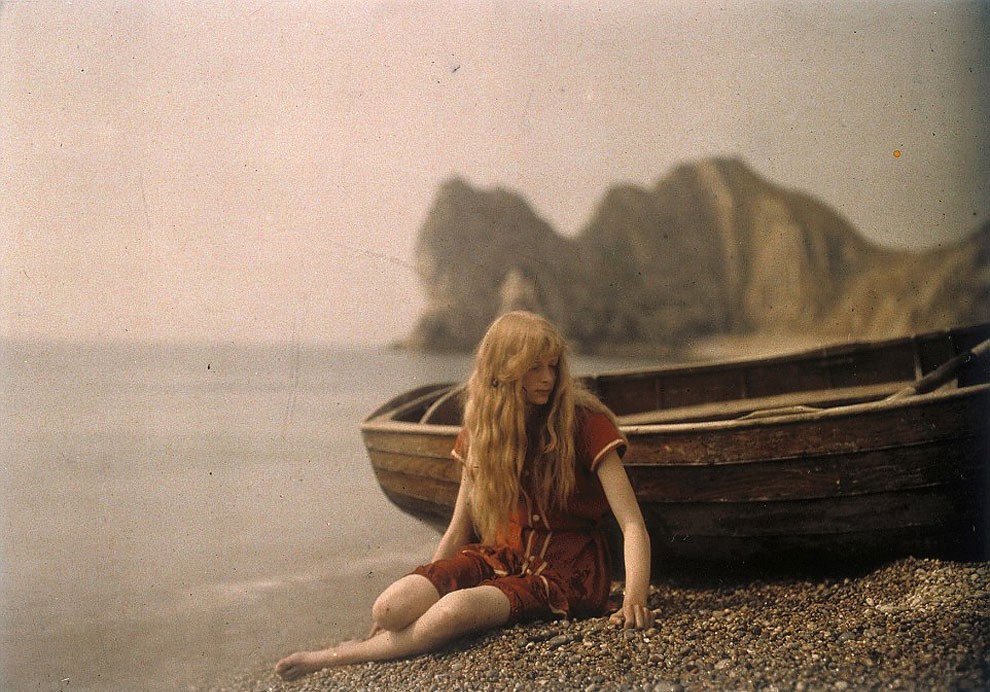 A portrait of O’Gorman’s daughter, Christina, taken on the beach at Lulworth Cove, Dorset. The comparatively long exposure time has given the sea a glassy quality and the large aperture setting and narrow depth of field has put Durdle Door in the background into soft focus. 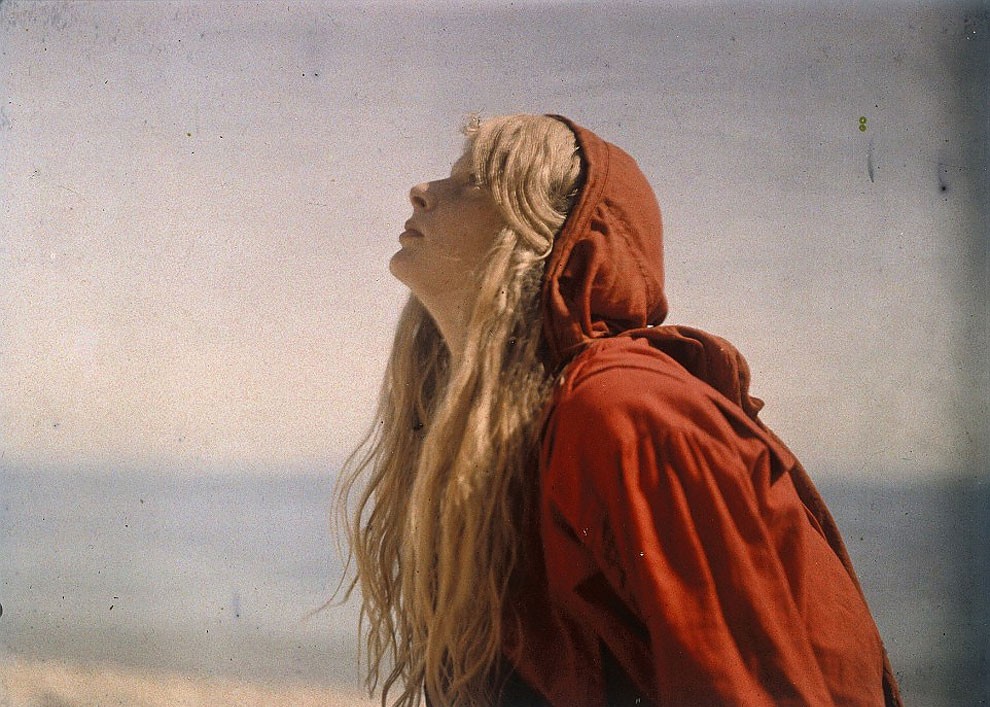 A dramatic and comparatively unusual close-up portrait of O’Gorman’s daughter, Christina, taken on the beach at Lulworth Cove, Dorset in 1913. The large aperture setting has reduced the background to near abstraction and the lack of any obvious period references gives this image a remarkably modern feel. 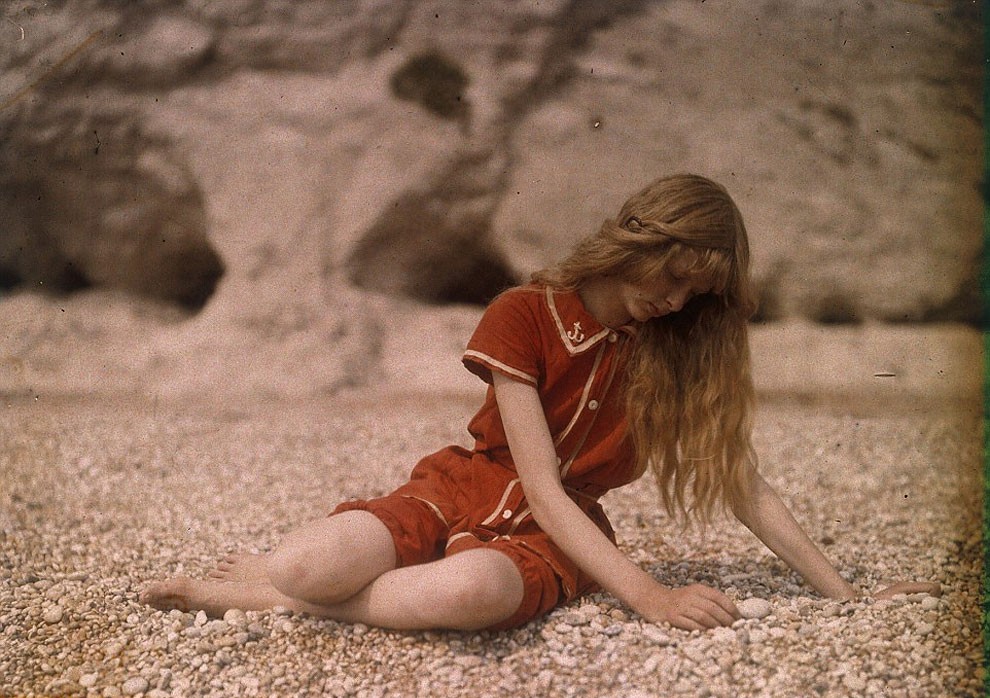 An evocative portrait of O’Gorman’s daughter, Christina, taken on the beach at Lulworth Cove, Dorset in 1913. Her choice of swimming costume was a fortuitous one since red was a colour which the Autochrome process captured particularly well. 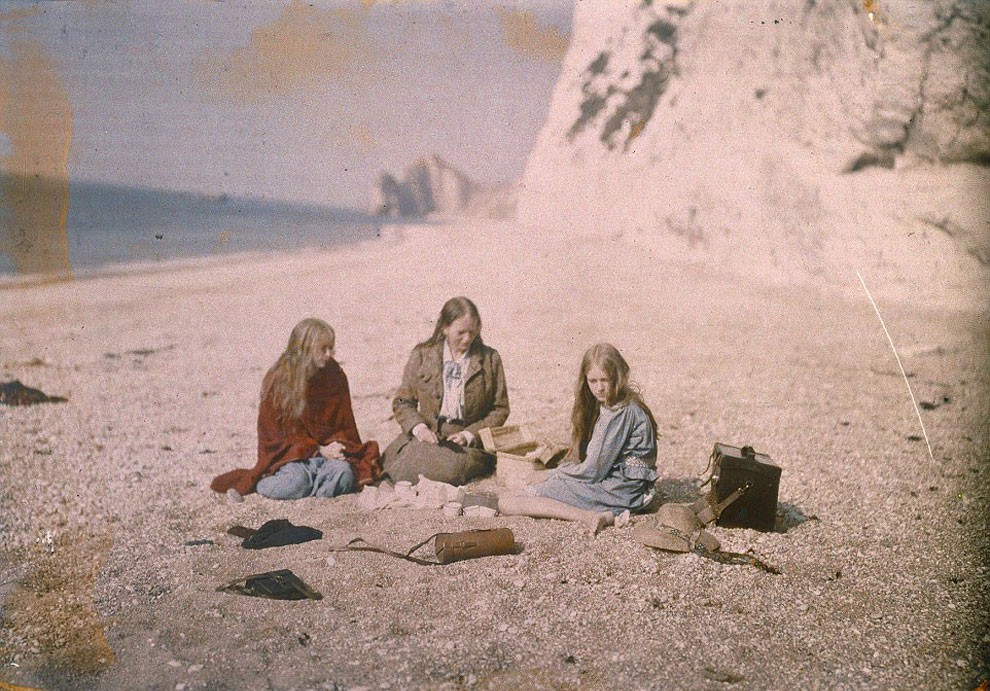 O’Gorman captures a timeless scene as his family eat their picnic on the beach in Dorset, with Durdle Door in the background. In 1897 O’Gorman had married Florence Rasch, who is sitting between their two daughters. O’Gorman’s camera case can be seen close by. One of the great advantages of the process was that it didn’t require special apparatus – photographers could use Autochrome plates in their existing cameras. 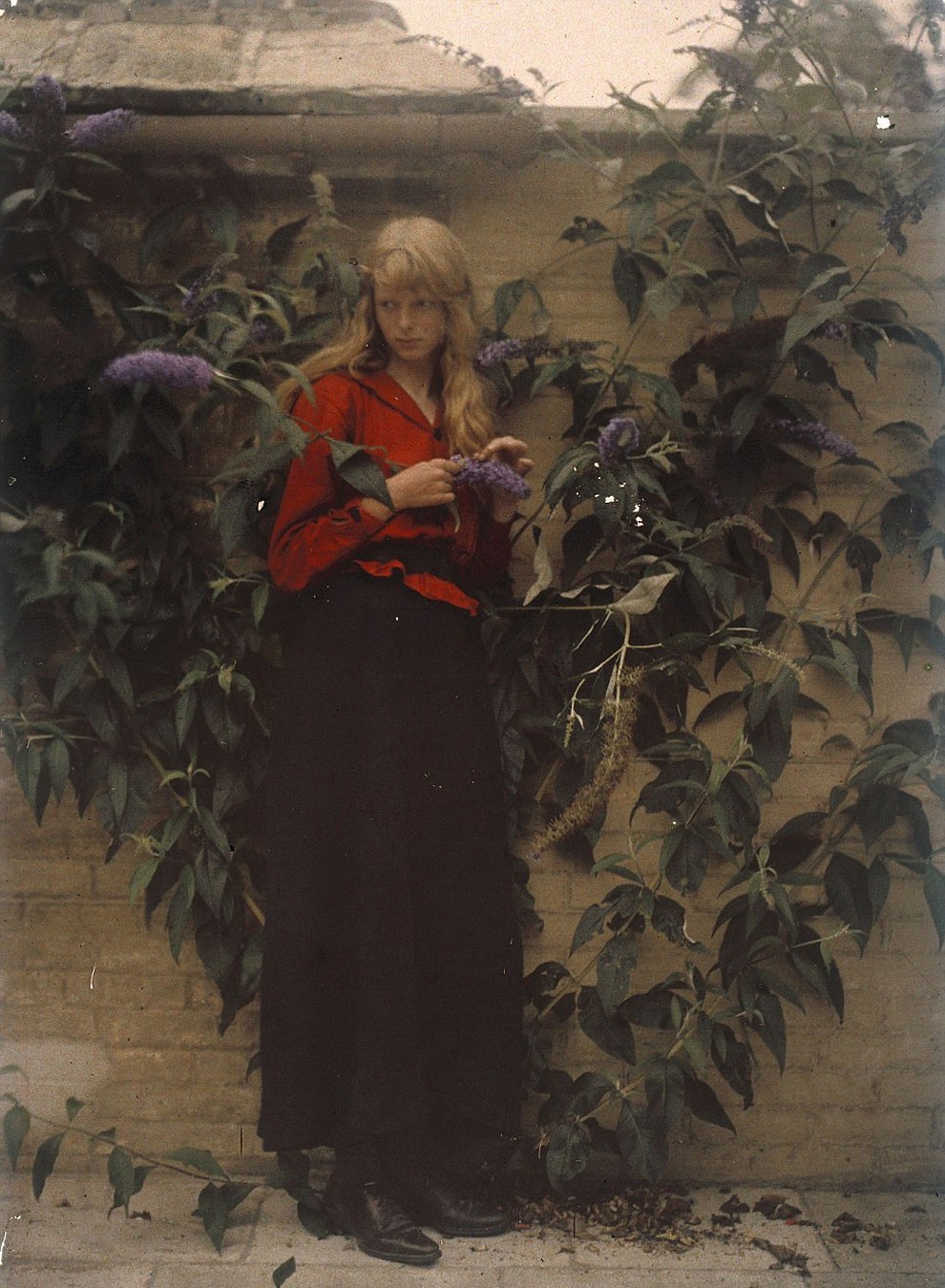 The subject of Mervyn O’Gorman’s pictures could have been a relative or family friend but experts say the pioneering amateur photographer’s wife Florence was 44 when they married in 1897, which makes their having children unlikely. 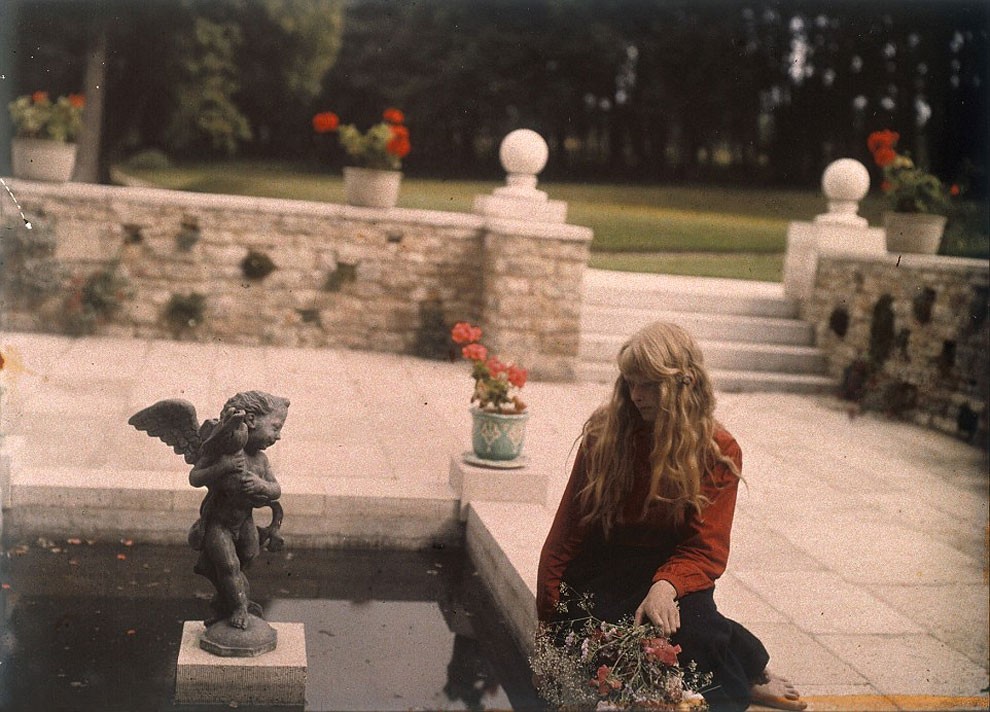 A portrait of O’Gorman’s daughter, Christina, gazing thoughtfully into an ornamental pond. The location for this photograph is not known but may possibly be the gardens of Rempstone Hall near Corfe Castle in Dorset. 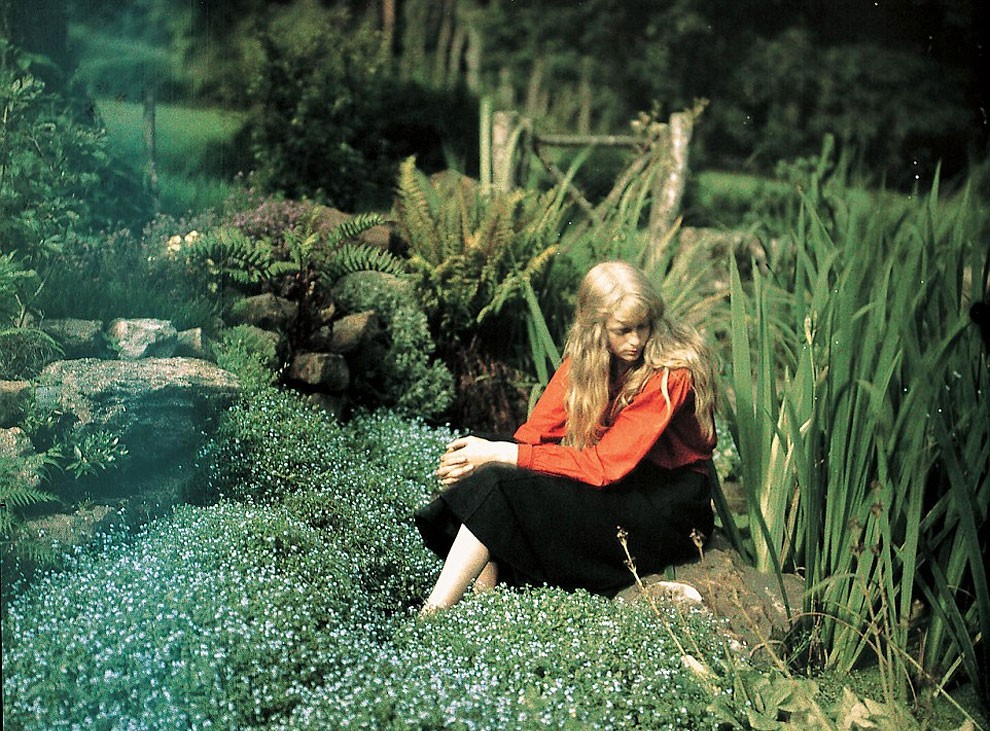 The vivid colours in this photograph, with Christina’s red blouse standing out against the green garden looks eerily modern.

Via The Daily Mail (h/t: The Dawn of Colour)

Atkins Ciwem Environmental Photographer Of The Year 2016 Winners
Two Sisters from Norway with Magical Photos Inspired by Nature and Music
Fascinating Vintage Photographs of Dutch Men In Traditional Volendam Worker Pants
Naughty NSFW Photo Series Gives A Whole New Meaning To Foodporn
Soviet Mystery Amphibious Vehicle Has Been Discovered In Chelyabinsk
Edwardian Angels: The Pure Beauties From The 1900s
17 Photos Of Classic Cars Next To Their Modern Version
"Europe From Above": Striking Drone Photography By Ewout Pahud de Mortanges
Breathtaking Photos Of London From Above
Wayne Sorce's Cityscapes Captured NYC And Chicago In Gorgeous Color
"Selfie": Photographer Flora Borsi Photoshops Herself Among A Famous Historical Figures
Child Photo Contest 2017 – The Best Pictures Dedicated To Childhood
In the Swim
Photo of the Day: The Opening Bell Dancer
Singapore From Above: Inspiring Drone Photography By Ryan James
Stunning Colorized Photos Show Child Laborers In Early 20th Century America
Photographer Captures The Laid-Back Cool Of California And Its People
A Fresh Breath of Icelandic Air
Realities Of The Twenties: Cool Snaps Show How Well They Dressed From The 1920s
The Meditative Beauty Of Nighttime In Dreamy Photographs By Neil Kryszak
Candid Photos Show Fashion Styles of Teenage Girls From the 1990s
"Mercury Ahead!": The BepiColombo Mission Has Captured Its First Views of Planet Mercury
Portraits of Twiggy Taken by Ron Burton for the Mirror and Herald in 1966
The Orphans Of Mother Russia: An Intimate Look At The Daily Life In The Ancient City Of Pskov
appeared, colour, gorman, mervyn, mystery, photos