Film producer Mike Kaplan has been an avid collector of posters of movie musicals for years. As an exhibition of his favourites goes on display in New York, he offers a guide to the cream of his collection. 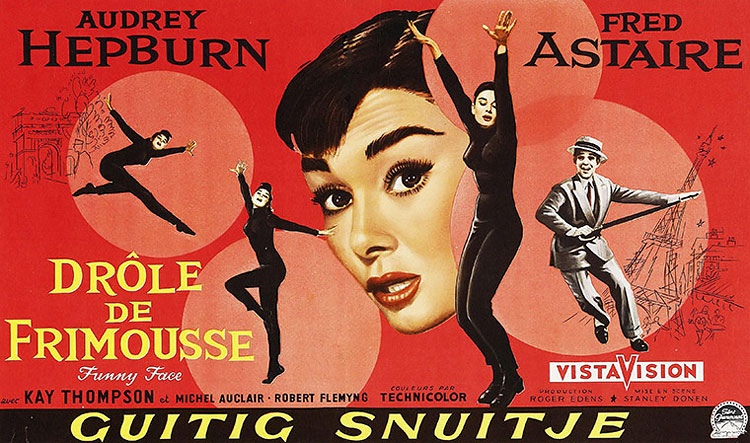 Three Audrey Hepburns in a black leotard, Fred Astaire with straw hat and cane, all dancing within four adjoining circles, plus a full colour Hepburn portrait, keep this Belgian poster for the delicious Funny Face in motion. Style in the movies was never better achieved than in Stanley Donen’s toast to romance and fashion. 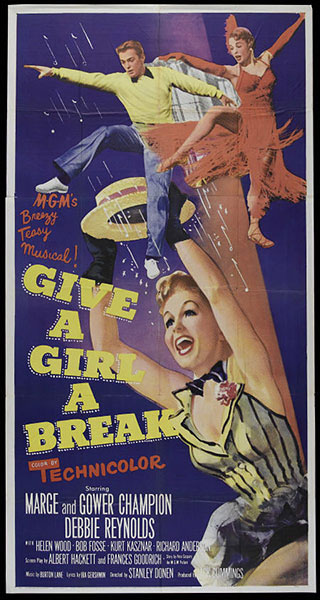 An exuberant Debbie Reynolds reaches towards top-billed dancers Marge and Gower Champion in this exhilarating design combining photography and artwork. 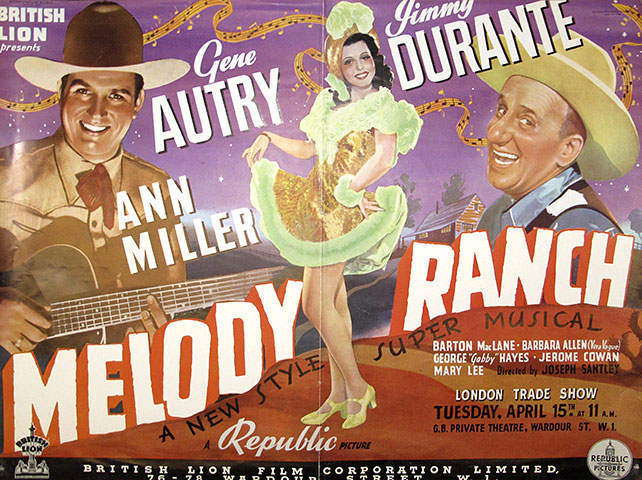 The unique star trio of Gene Autry, Jimmy Durante and an alluring Ann Miller are given major treatment in this colourful, enticing British poster promoting one of the singing cowboy star’s most expensive western musicals. Joseph Santley, who directed many of Ann Sothern’s popular comedies and musicals in the early 1930s, was behind the camera. 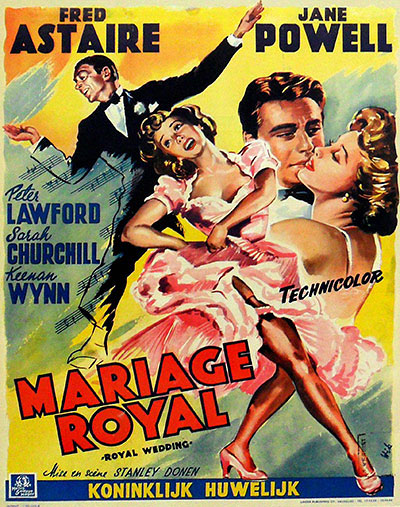 As one of the crown jewels of MGM’s musical royalty, Jane Powell’s singing and acting were never in doubt, but she proved to be an equally inspired dancer as Fred Astaire’s sister and partner in, arguably, Royal Wedding’s best poster. Another Stanley Donen gem. 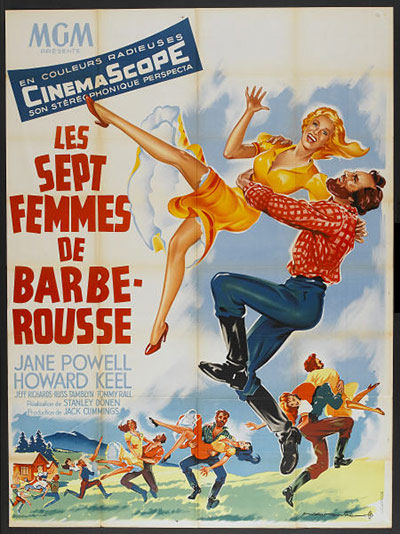 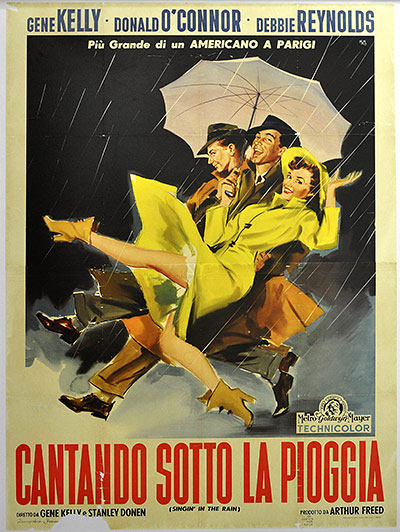 A rainy grey-black background contrasts with the colourful, joyous trio of Gene Kelly, Donald O’Connor and Debbie Reynolds, the three major talents who headline one of the great movies. This Italian poster is arguably their most imposing rendering. 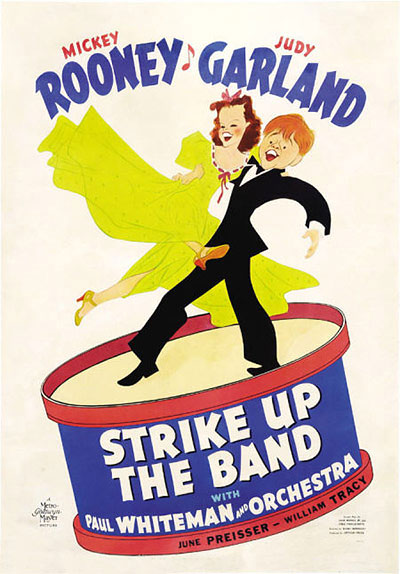 Mickey Rooney and Judy Garland spring to dancing life in this rare poster of Busby Berkeley’s musical – created by the master of caricature art, Al Hirschfeld. Hirschfeld eventually worked for all the studios but the majority of his movie work was for MGM. 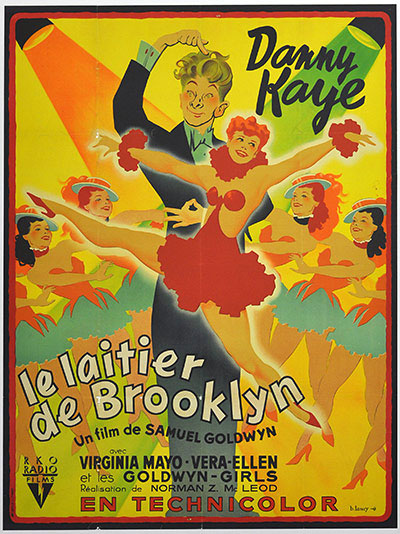 A wealth of inspired colour, a bevy of dancing girls and a humorous illustration of Danny Kaye vibrate in the star’s second film with Virginia Mayo and Vera-Ellen. Note the violation of the French “auteur theory”, wherein producer Samuel Goldwyn receives the “film by” credit rather than director Norman Z McLeod. 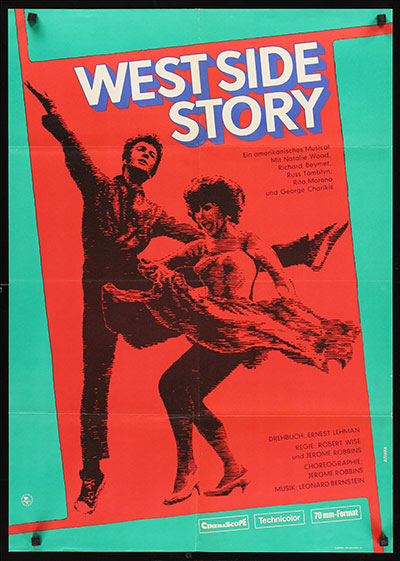 George Chakiris and Rita Moreno – the charismatic best supporting actor and actress Oscar winners dominate this East German poster for Robert Wise and Jerome Robbins’ landmark musical drama. It is the only version of the poster in which they are central to the design. 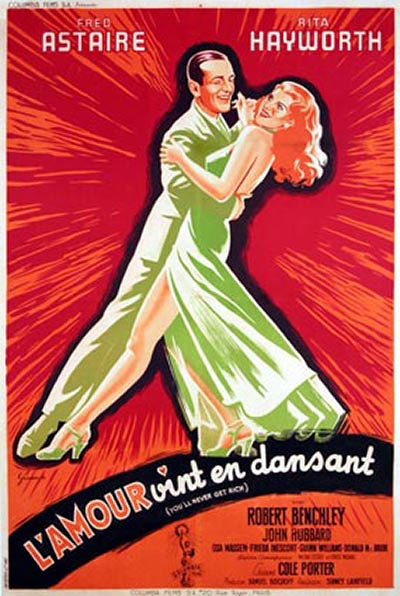 The first teaming of Fred Astaire and Rita Hayworth vibrate with energy in this timeless French design, which could have been conceived today. Artist Boris Grinsson took an image used in many countries, and made it pulsate, reflecting the magnetism the stars brought to each other.