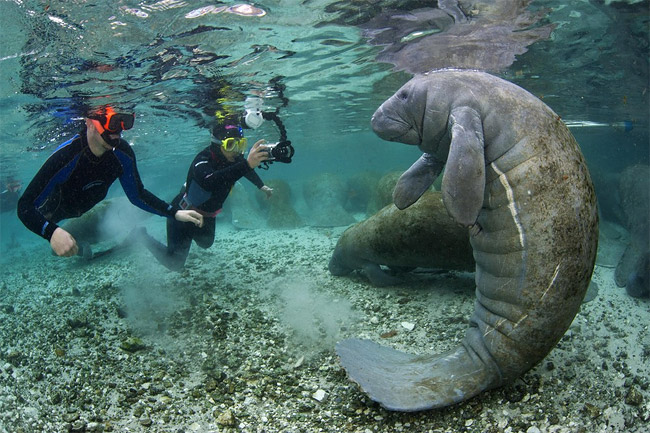 Snorkellers approach an adult manatee at Three Sisters Spring, Crystal River, Florida. You might imagine that coming face to face with one of these enormous underwater mammals would cause some concern. However, the likelihood is that the rotund creature just wants you to scratch its belly while it floats around happily, as world-renowned underwater photographer Alex Mustard discovered. (Photo by Alexander Mustard/Barcroft Media) 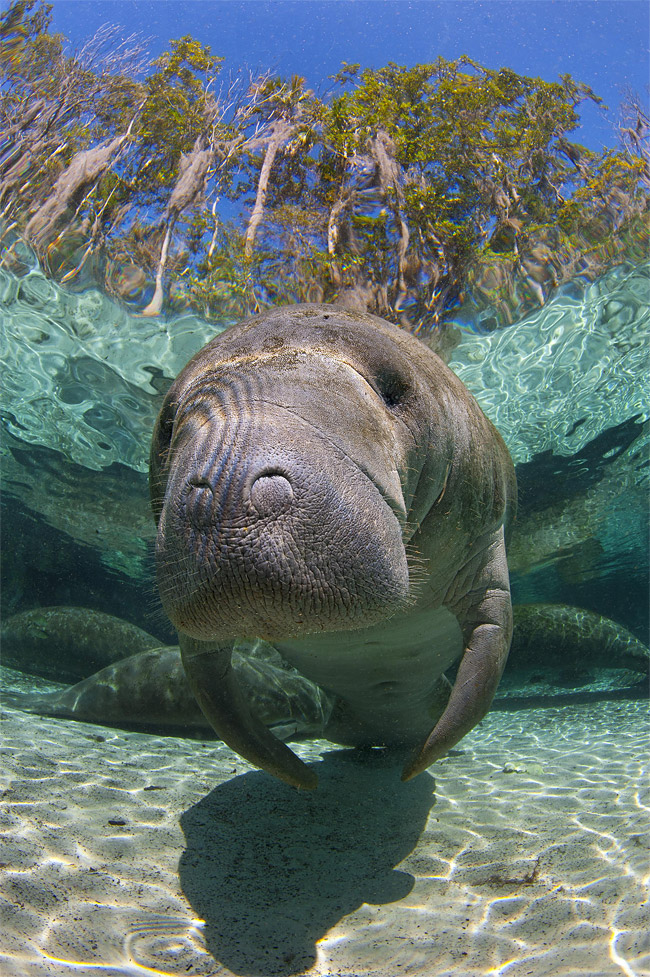 Alex travelled to the west coast of Florida, close to Crystal River city, in February, where the animals congregate in the winter. Here, several freshwater springs attract the manatees when their normal ocean habitat becomes too cold. (Photo by Alexander Mustard/Barcroft Media) 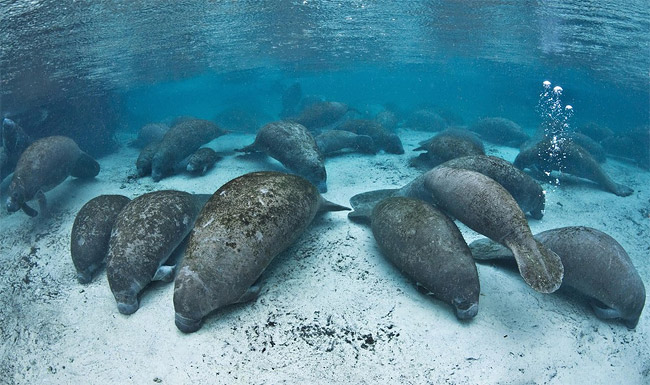 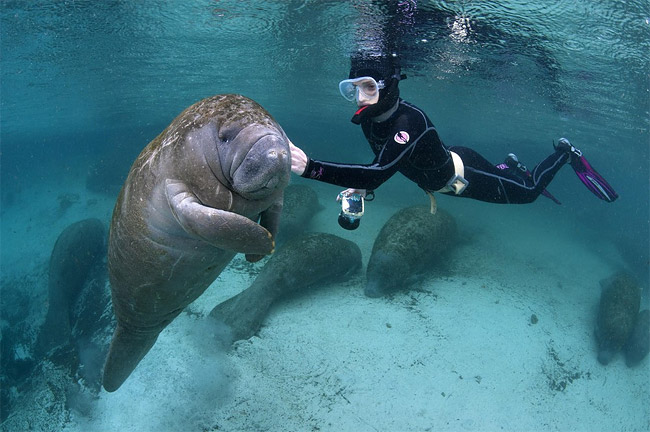 “Manatees live life at a slow pace, so when you swim with them you are forced to chill down to their speed”, explained the 36-year-old from Hampshire. “They’re just floating about in a sort of zen state. Then, when they come up to you and want you to scratch them, it is so exciting you get a real connection”. (Photo by Alexander Mustard/Barcroft Media) 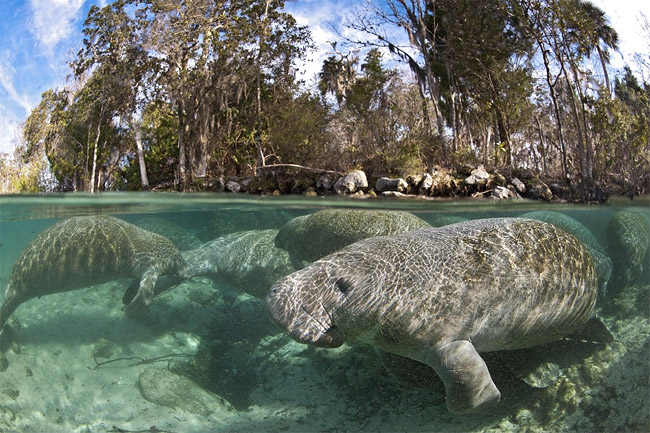 A group of manatees wallow in shallow water in Crystal River. (Photo by Alexander Mustard/Barcroft Media) 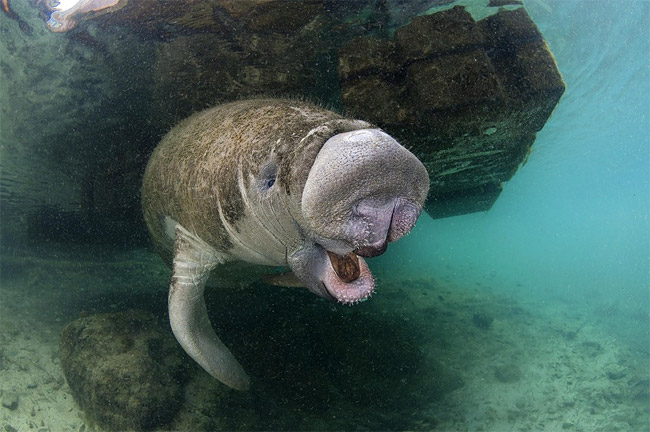 After so many years capturing the underwater beauty of some of the world’s most exotic destinations, Alex says it is the waters around Britain which excite him the most. “Our own seas and rivers are a hard place to photograph because they are cold and usually murky, so for years I ignored them, preferring to travel to find conditions more conducive to producing pleasing images. But for the last 18 months I have been working on a British conservation photography project called 2020VISION, where a team of 20 photographers are documenting the importance of the wild places of Britain for both wildlife and the British people. It has made me appreciate our waters more than ever”. (Photo by Alexander Mustard/Barcroft Media)

Living With Wolves
This Is A Tiny Hamster Rides Her Own Personal Subway Train
"It Needs to Be Clean, Not Wet": Hilarious Dog Shampoo Ads
"Cat Selfies": An Amusing Collection Of Cats Taking "Selfies"
Fun Animal Facts You May Never Knew Existed Or Cared About
Very Rare Baby South Philippine Dwarf Kingfisher Photographed For The First Time Ever
Beautiful Photos Of Siberian Husky Goes For A Walk On A Frozen Lake
The Extremely Rare Black Leopard Confirmed In Africa For First Time In 100 Years
This Is The Most Ridiculously Fashionable Feline Ever
The Black Intruder
100 Cameras Were Given To The Homeless And This Is What They Photographed
No Rat Shall Pass: Cats of the Hermitage Museum
Exploring The Dark: Spectacular World By Alexander Joseba
Polar Bears in Sunset
Photographer Mark Taylor Captures Hilarious Photos Of Pet Doppelgängers Sharing The Same Colors
Japanese Photographer Releases Book Of Breasts And Cats
Puppies Around Fire Pit For Warmth
See Inside This Cat Cafe In New York
Juniper, The Happiest Fox In The World
Riding a Snail
2021 Pooping Dogs Calendar Is Here, and This Year Contains a Puzzle
Rescued Deer Becomes A Local Celebrity In Norway
Meet The World's Oldest Cat: Nutmeg The Grumpy Tabby Who Is Going Strong At 31-Years-Old
Swimming Pig Off The Island Of Big Major Cay
alexander, florida, friendly, manatees, mustard, photographed

Photographer Documents Chickens, And They All Look Like Supermodels
Japanese Cats Love Nothing More In The World Than Watching Farmer Next Door Plant His Rice
Fun Animal Facts You May Never Knew Existed Or Cared About
Baby Mammoth Yuka on Display in Moscow
Japanese Artist Turns Awkward Animal Photos Into Beautiful Sculptures
Perfect Imperfection: Photographer Documents The Beauty Of Animals With Disabilities
The Japanese Use a Real Rabbits As Case For Smartphone
Stunning Winners Of The 2018 Dog Photographer Of The Year Contest
Rescued Dog Loses 35 Pounds Of Hair After Getting Its First Haircut In 6 Years
Couple's Dog Is the Cameraman On Their Enchanting Wedding Day
Source of inspiration since 2007. Proudly hosted by WebHostingBuzz.
Privacy Policy · Terms of Service · Content Removal Policy 🇺🇦 ❤️