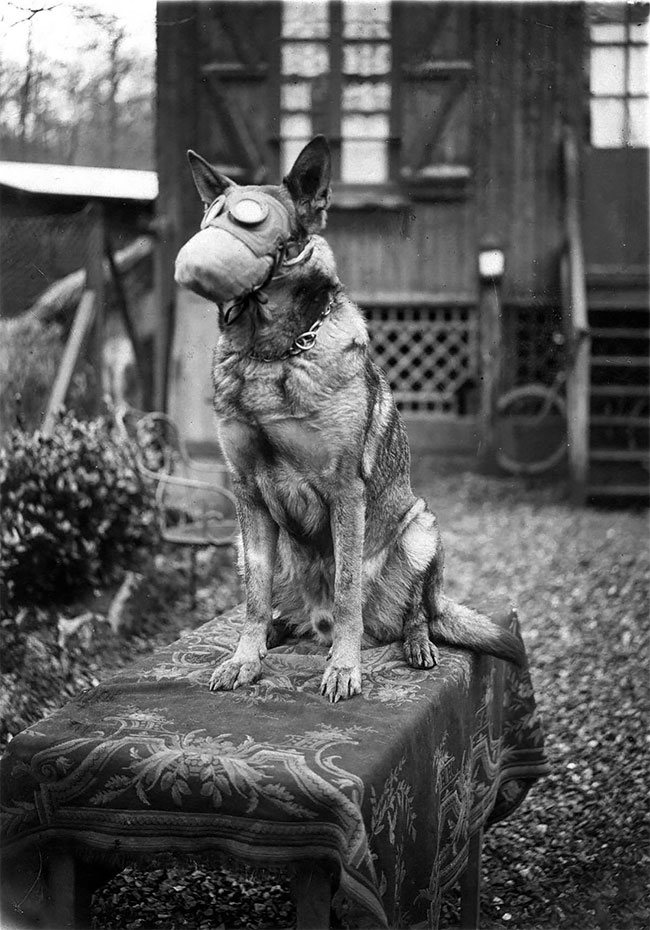 More than eight million horses, mules and donkeys and a million dogs died in World War I. Everyone knows the enormous human cost of the conflict, but it is easy to forget the fates of the million of animals that supported the war on all sides. Animals were important companions and workers to the soldiers at the front, and like their human compatriots they needed protection from the perils of chemical warfare. 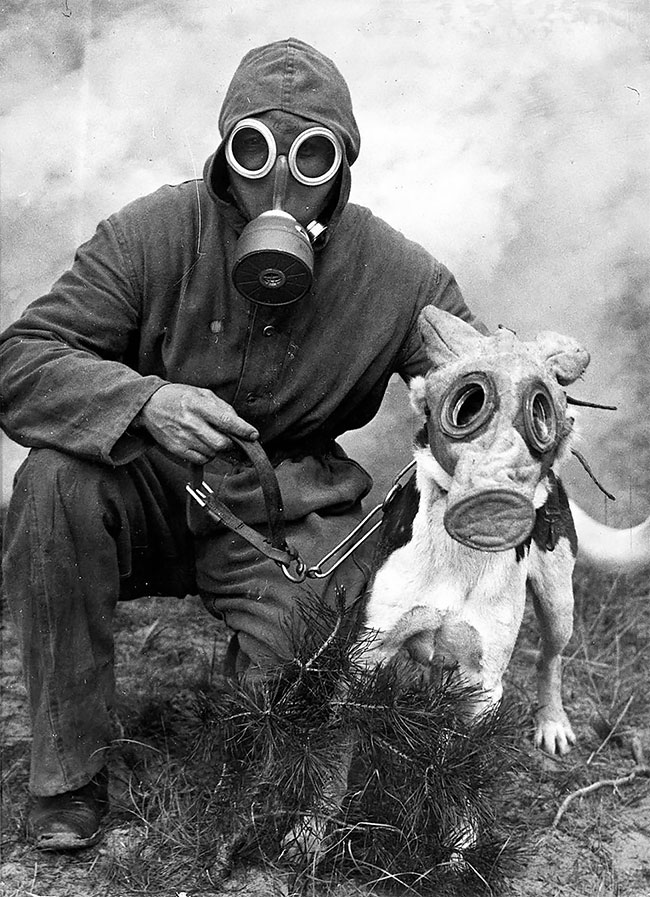 Pack animals carried supplies and weapons on the front and rear lines. The railways that carried the millions of tons of food and ammunition to the rear were frequently several miles away, so horses, mules and donkeys bridged the gap even after engineers set up light railway and automobile supply lines. (The German army would remain majority horse-drawn through World War II.) 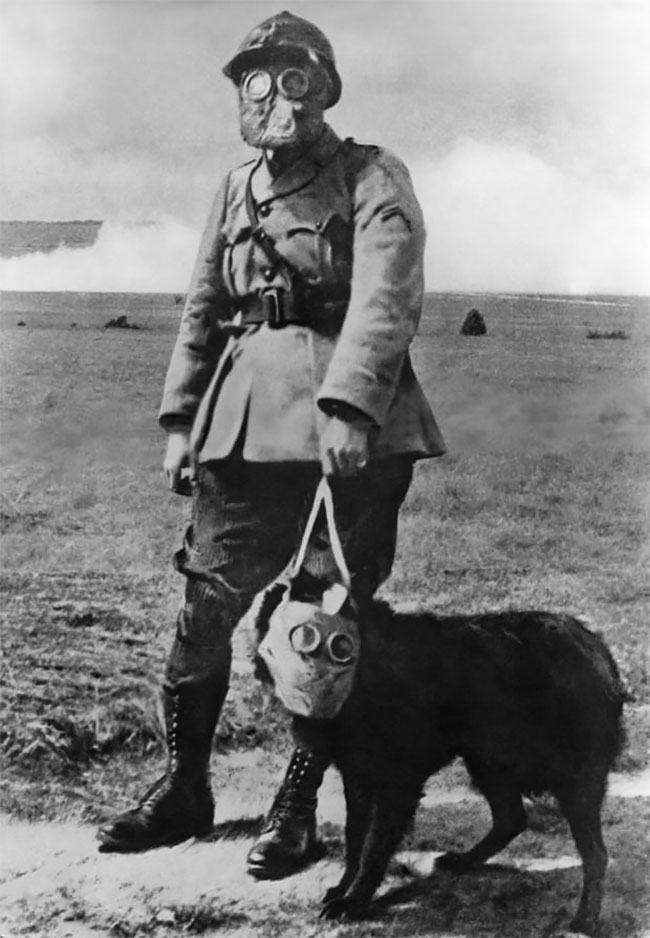 Between 1916 and 1918, gas hospitalized 2,200 horses and killed 211, mostly because logistical uses limiting their exposure to the more dangerous areas at the front. 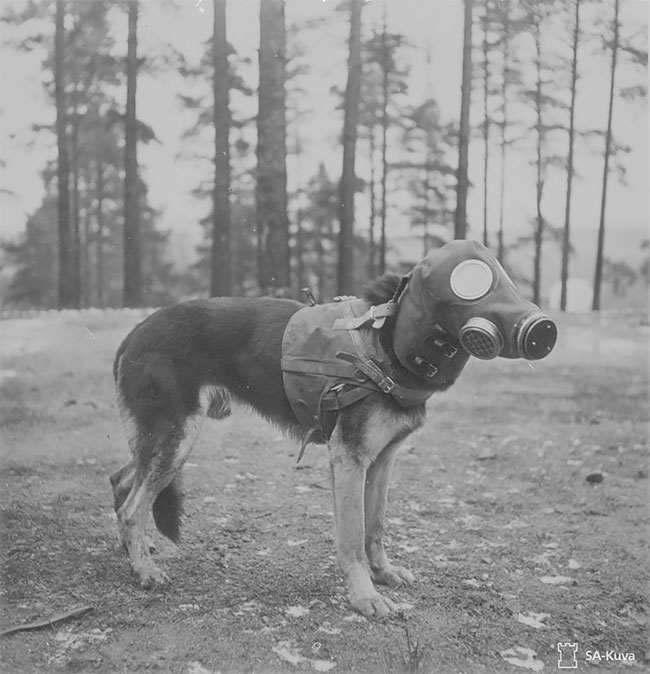 The Germans used some 30,000 dogs on the Western Front, and the Entente kept around 20,000. Some dogs pulled heavy machine guns on trolleys, others used their keen sense of smell and hearing for sentry and scout work. Their small size helped them slip over and between trenches to deliver messages, shuttle medical supplies or lay down communication wires. 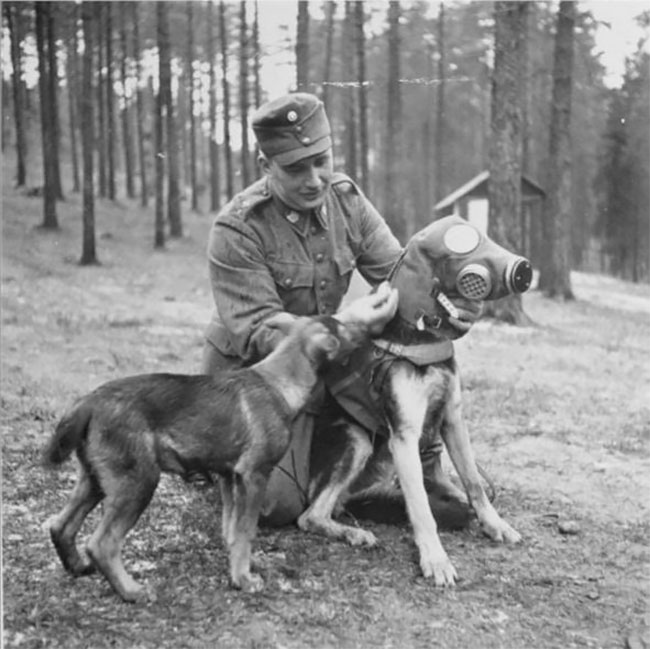 In a less formal way, dogs improved morale within the trenches by hunting rats and acting as companions to troops in miserable conditions. Cats also performed well in this role. 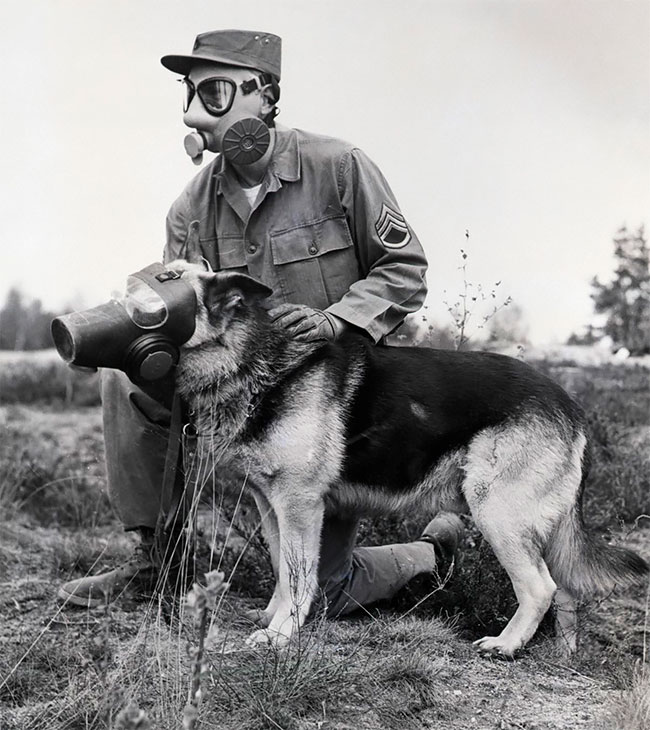 Before animals received customized gas masks, many soldiers simply attached human masks. Troops wrapped straps around the noses of pack animals, or squeezed dogs’ faces into the soft baggy masks they used for themselves. This caused some problems. The shallow covering of the human mask could not protect a dog’s sensitive ears. For horses, mules and donkeys, the distance between their eyes and nose left some blinded during poison gas attacks. 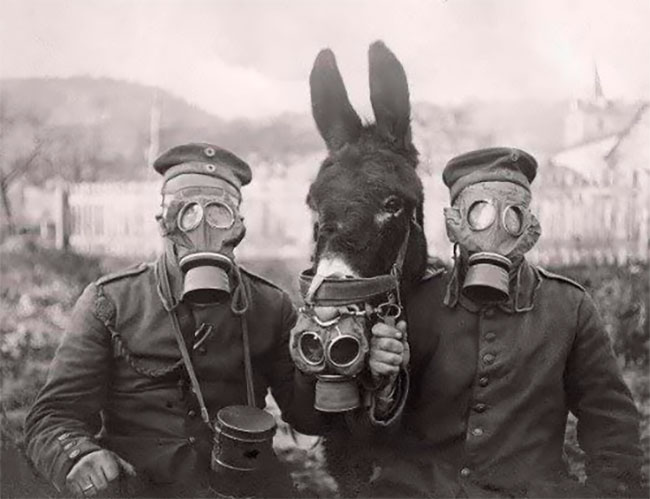 So the Army found inspiration from existing technology — the equine feedbag attached to the horses’ heads. Both the Germans and British armies developed a five-inch by 14-inch flannelette and cheesecloth bag soaked in filtering chemicals fitted around a horse’s nose. But this afforded limited protection. 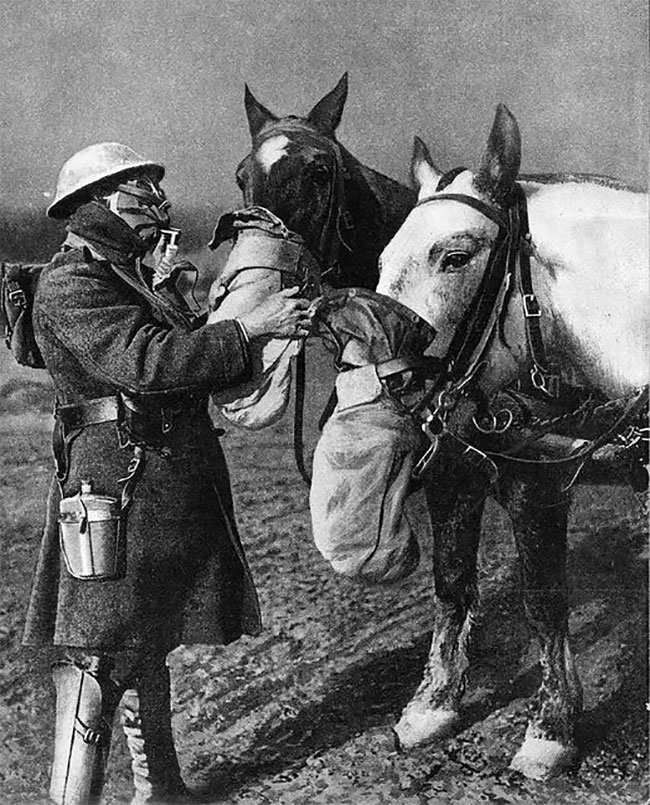 Horses often chewed through the canvas bags after mistaking them for feed. They were still vulnerable to skin blistering during mustard gas attacks and irritation from eating contaminated feed. Some cavalry horses had their own goggles to protect their eyes during chlorine gas attacks, but issues with fogging limited the use of goggles. As a result, exposure to the more dangerous gases left horses blinded alongside their human comrades. 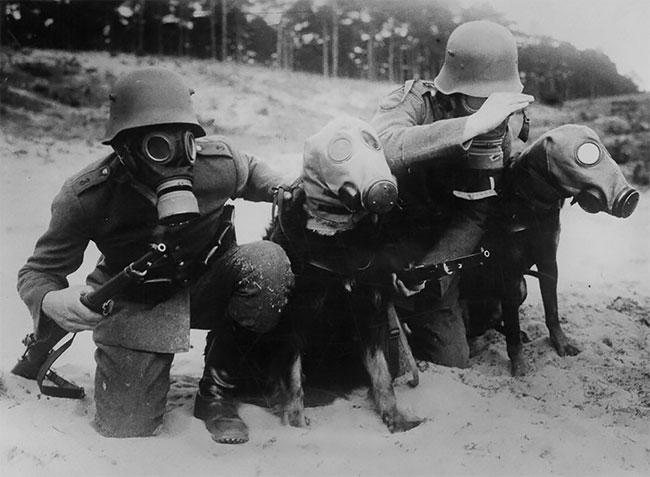 Dogs had their own gas masks, too. Many of these early masks simply restitched the goggles and respirator from the human mask and fitted the apparatus to a canvas bag or sock that wrapped around the dog’s neck. This protected the entire head from exposure. 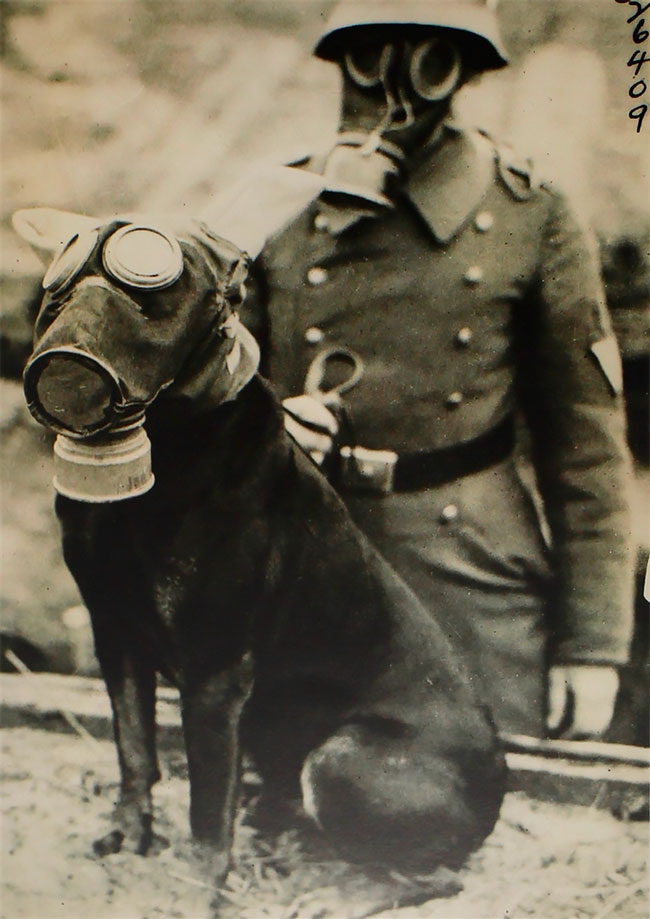 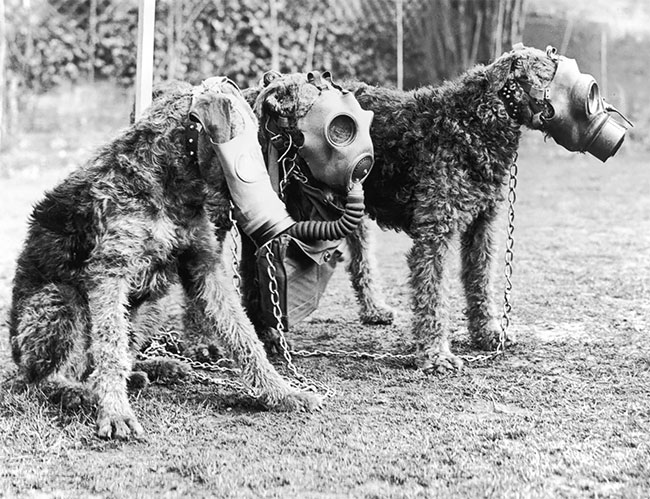 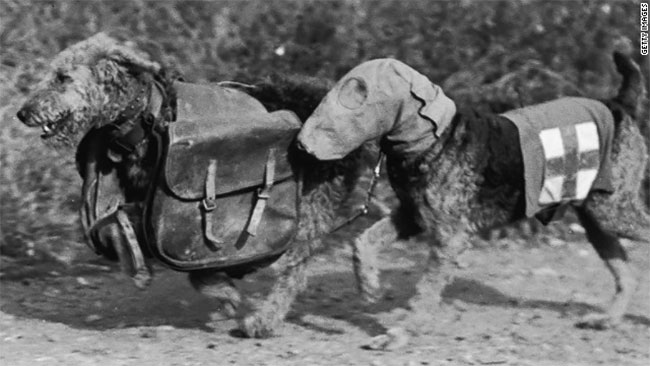 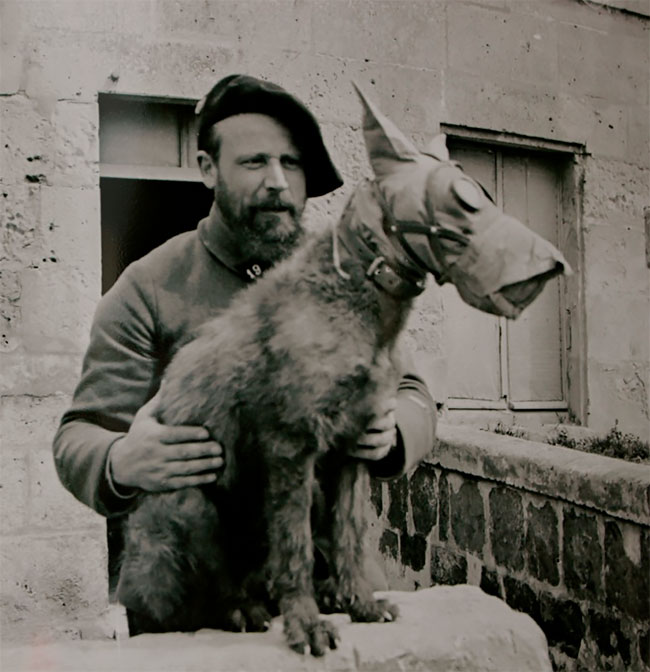 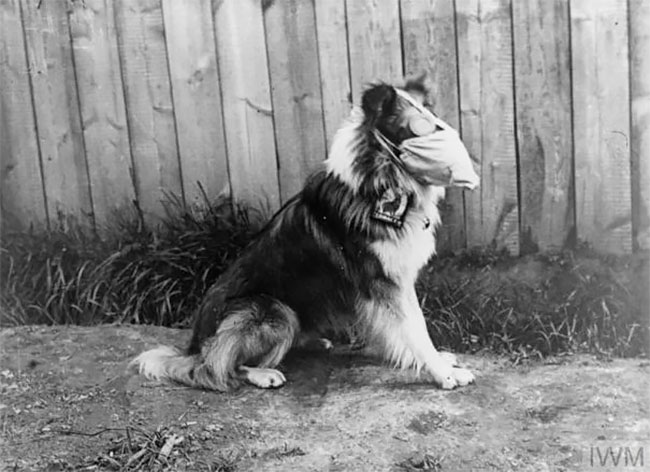 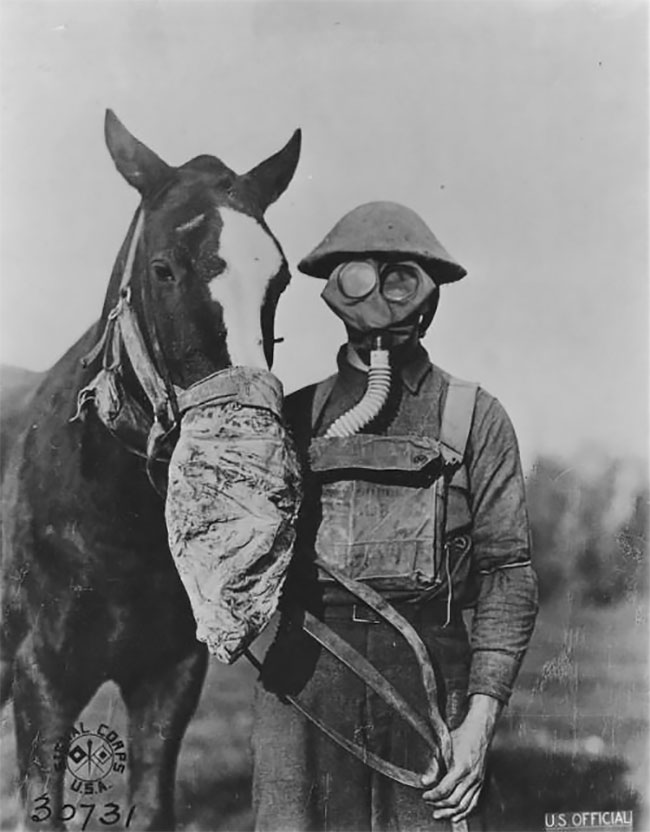 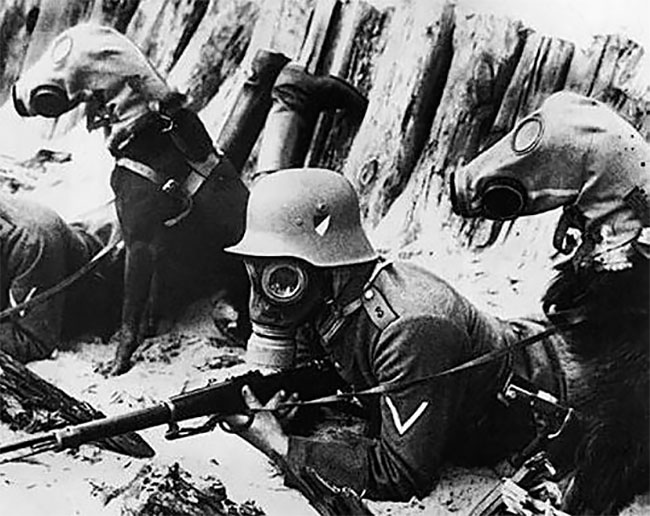 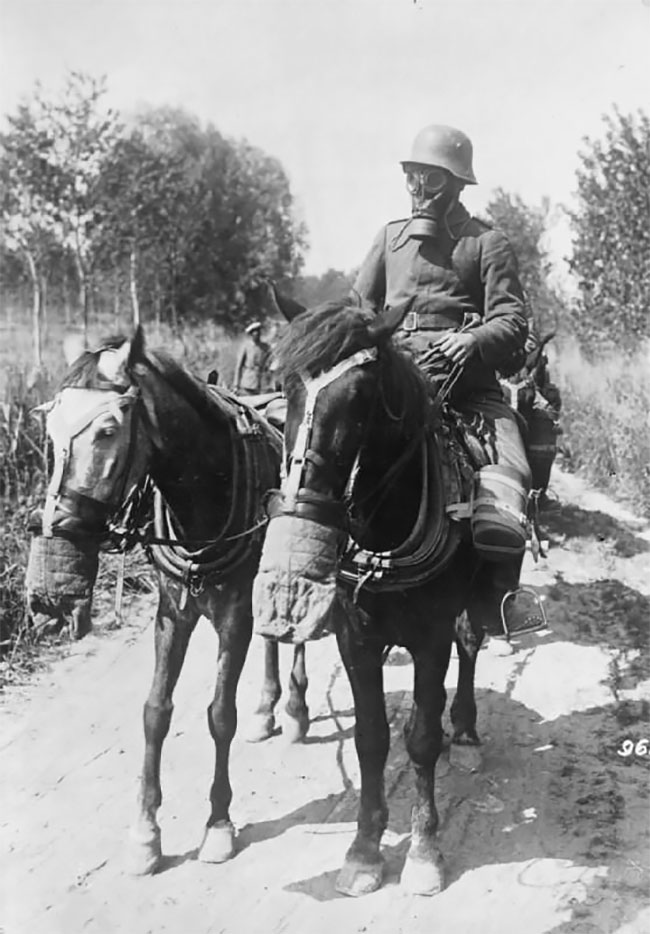 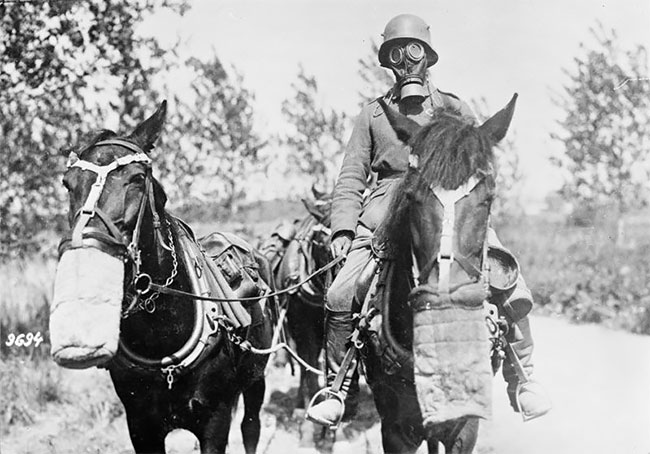 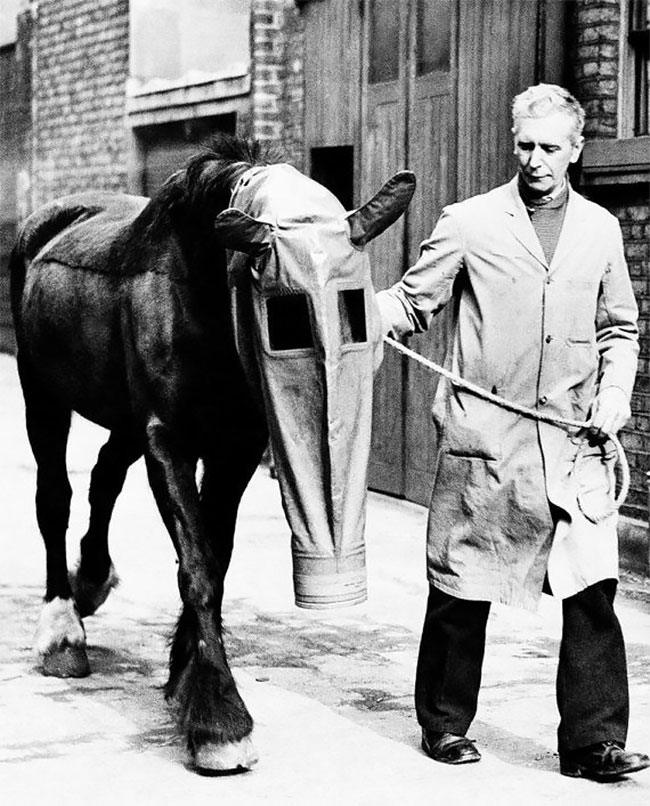 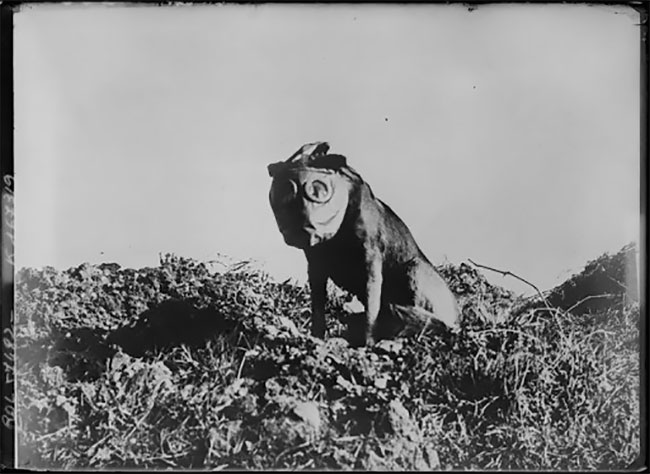 Meet Kyle, A Cat With A Cute Mustache And A Troubled Past
How Animals Chill in Summer Heat
Shelter Dog Photobooth Pics Helps More Pups Find Forever Homes
Juniper, The Happiest Fox In The World
Funny Animal Pics That Just Don’t Make Any Sense, As Shared On This Instagram Account
Cheerful Portraits Of Cats Shaking Themselves Clean
Baby Pygmy Hippopotamus Is Ridiculously Cute!
Cats Are Ninjas, And This Japanese Photographer Proves It
An Artist Created A Needle-Felt Realistic Sculptures Inspired By Real Animals
Sygmond The Grey Majestic Cat
Prankster Replaces Pet Names With New Labels In Local Pet Store
If You Ever Feel Sad, Just Remember That Horses Can Grow Mustaches
This Guy Makes 3D Printed Helmets For His Cat
This Art Collective Creates Concepts That Have Emerged From The Coronavirus Pandemic
Bored Sitting At Home? Try To Find A Cat In Each Picture!
This Is A Tiny Hamster Rides Her Own Personal Subway Train
The Surprising Beauty Of Microscopic Insects, Isopods And Crustaceans Illuminated With Polarized Light
The Serengeti Lion by Michael "Nick" Nichols
This Dog Loves to Play Dress Up With Cardboard Cutouts
Cat Fishing: Leopard Gets Covered In Mud Catching Its Fish Supper
When Dogs And Their Humans Become One By Isaac Alvarez
BooBoo the Guinea Pig
Monkey Adopts Kitten
Tiger Cubs Take Swimming Test at Smithsonian National Zoo
gas, masks, pets, ww1