Vivid Sydney is a unique annual event of light, music and ideas, featuring an outdoor ‘gallery’ of extraordinary lighting sculptures, a cutting-edge contemporary music program, some of the world’s most important creative industry forums and, of course, the spectacular illumination of the Sydney Opera House sails. It positions Sydney as the creative hub of Australia and the Asia-Pacific region, and delivers both innovative live entertainment and creative inspiration on a grand scale.

The creative people of the world – from industry professionals to aspiring practitioners to the merely curious – are invited to Sydney annually to watch the city transform into a breathtaking canvas of creative expression. For 18 days, creative practitioners, corporate professionals, families and people of all generations take advantage of Sydney’s mild winter weather and engage with a truly spectacular event. 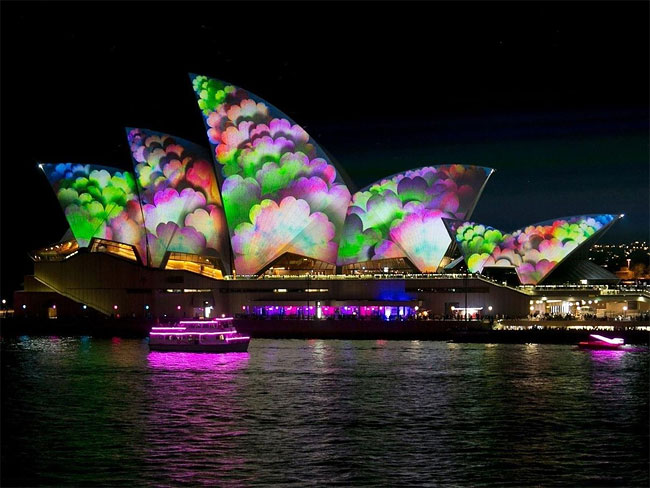 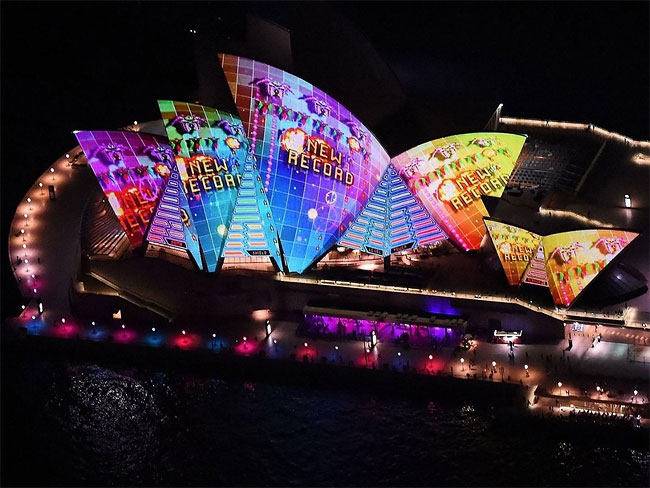 NSW Premier Mike Baird said: “Vivid Sydney has become one of the city’s most anticipated events, drawing massive crowds from Sydney, interstate and overseas. This event showcases the state’s creative talent and transforms the way the city’s most famous landmarks are viewed using spectacular lighting displays and projections.” 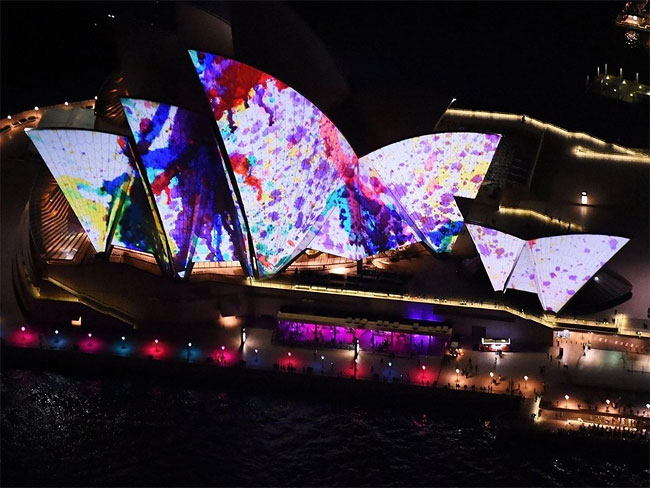 Last year’s Vivid festival attracted around 800,000 visitors to Sydney, and as the festival has expanded to new parts in the city, it is expected this year will bring even more people to the city. 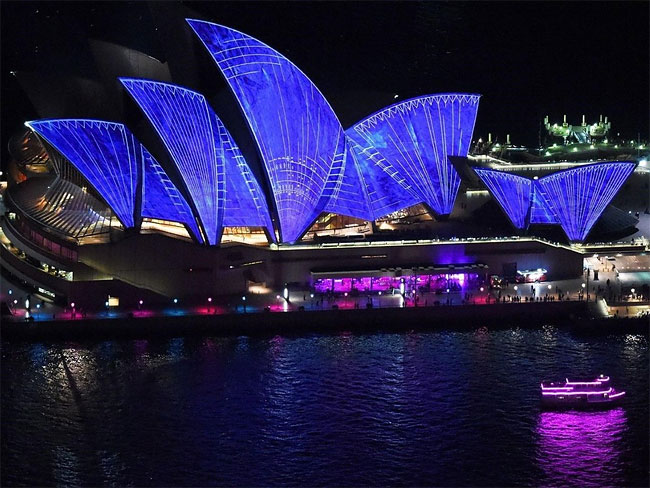 The Opera House video display is one of the most popular visitor attractions during the festival and being close to the Opera House affords visitors great views of the Harbour Bridge and across to the Museum of Contemporary Art. 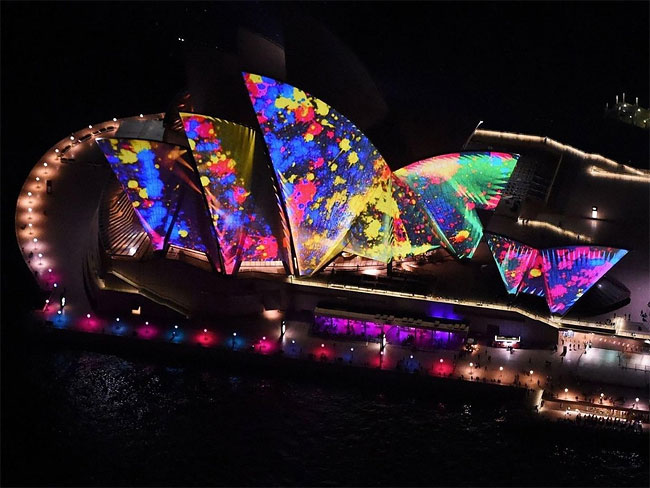 The Sydney opera house has a series of video displays on it, from 59 Productions, the video designers who worked on the 2012 London Olympics opening ceremony. 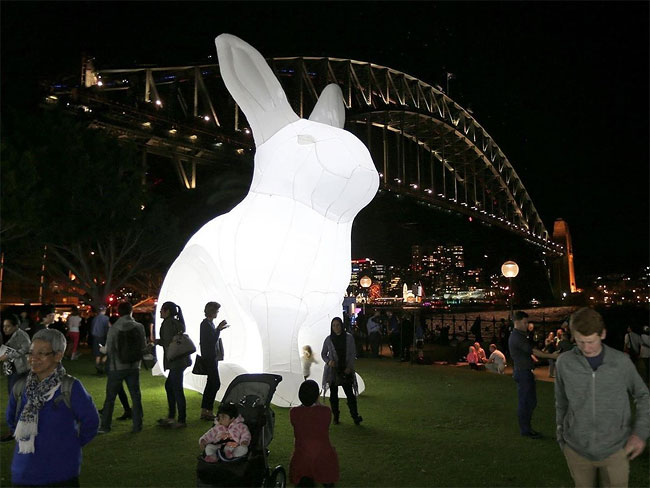 The festival will have been boosted by the unseasonably warm weather that Sydney is enjoying at the moment, with record warm temperatures for the month of May. 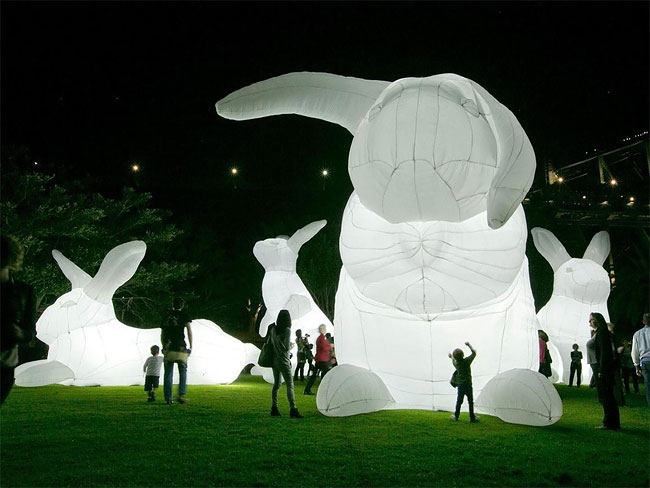 These large white rabbits, by artist Amanda Parer, can be found at Sydney’s harbourside, at the location where rabbits were first brought ashore in Australia in 1788. Rabbits are now an out of control pest in Australia and these 7m bunnies represent a problem that’s too easy to ignore. 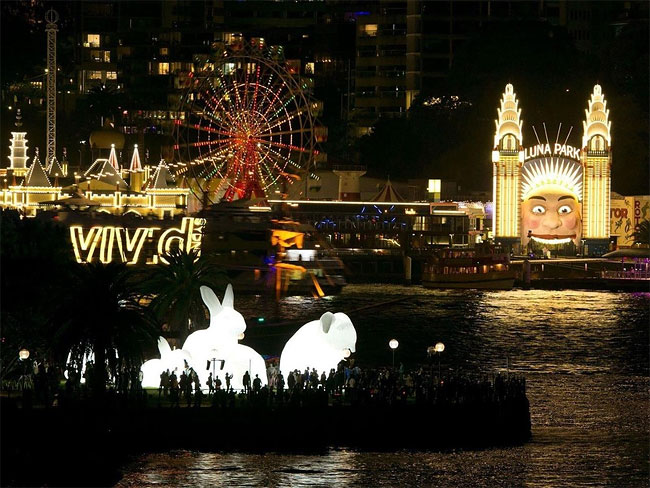 This is the sixth year of the Vivid festival and it sees areas such as Luna Park light up. The festival also bring light art, such as these rabbits, to Sydney. 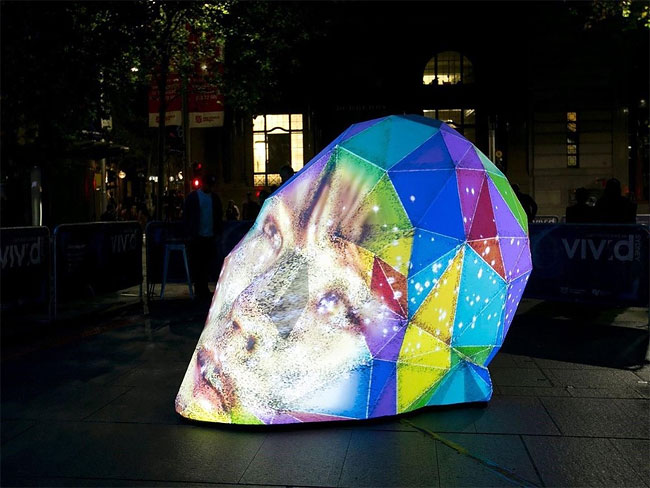 One of the new parts of the city to host Vivid this year is Martin Place in the CBD. The e/MERGEnce installation is a 1.6m sculptured head onto which a webcam can map your face. 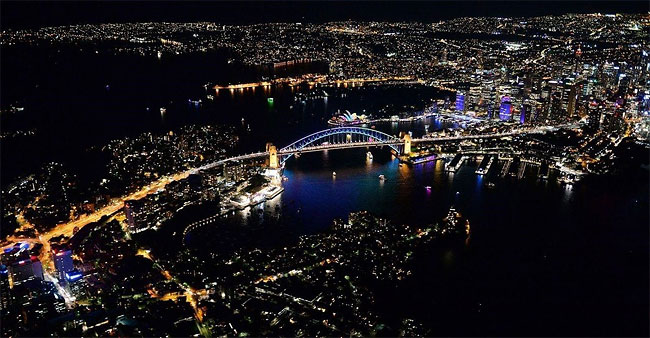 The Vivid festival runs until 9 June and is made up of more than 200 events including around 50 free light installations across Sydney. 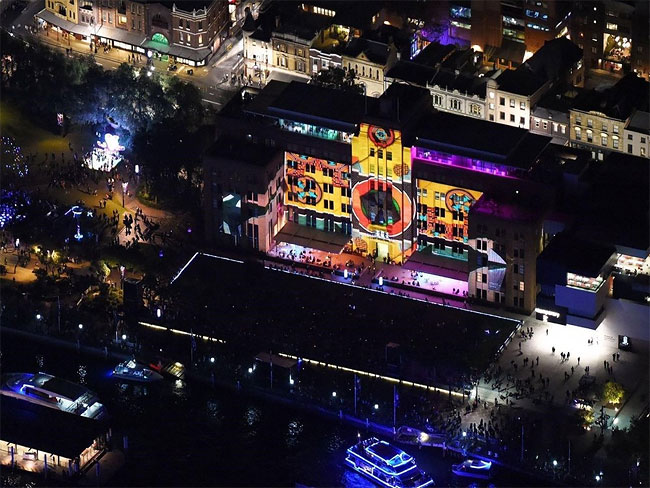 Sydney’s Museum of Contemporary Art, also situated at Circular Quay, has an eight-minute loop of images that have been inspired by cosmology and science fiction. 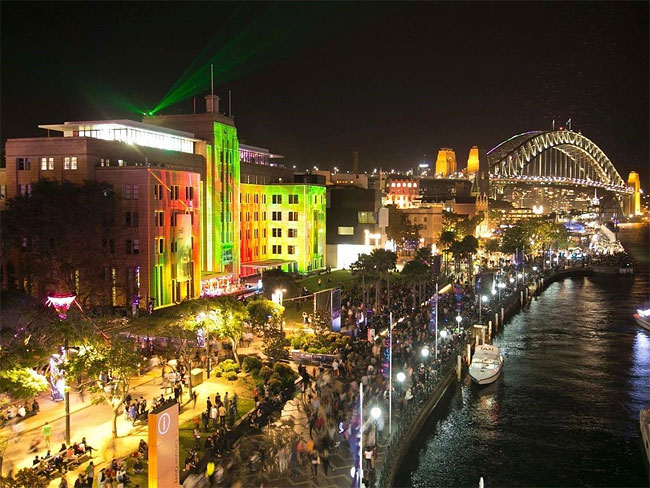 Here visitors can be seen outside the Museum of Contemporary Art, on Circular Quay heading towards the Harbour Bridge, while the whole area enjoys the lights of the Vivid festival. 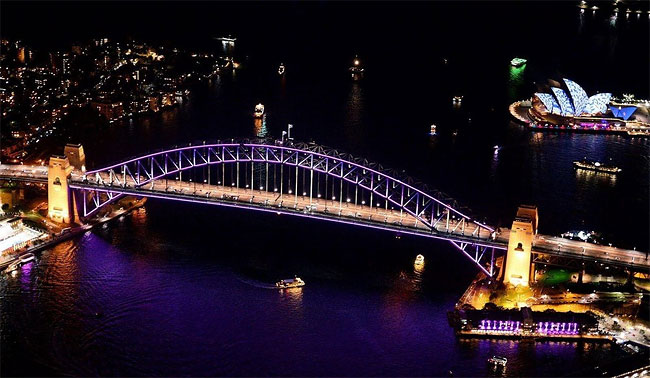 The harbour bridge and opera house are lit up as part of Sydney’s Vivid festival. 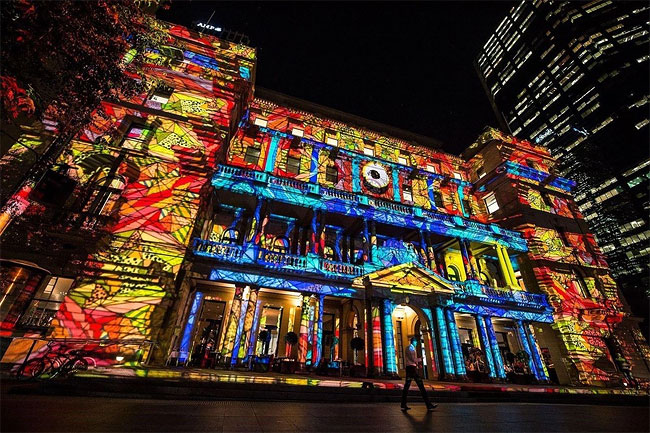 Customs House at Circular Quay, has the “Play Me” installation, which covers the front of the building with a range of patterns which can change in reaction to instruments that are played by visitors. 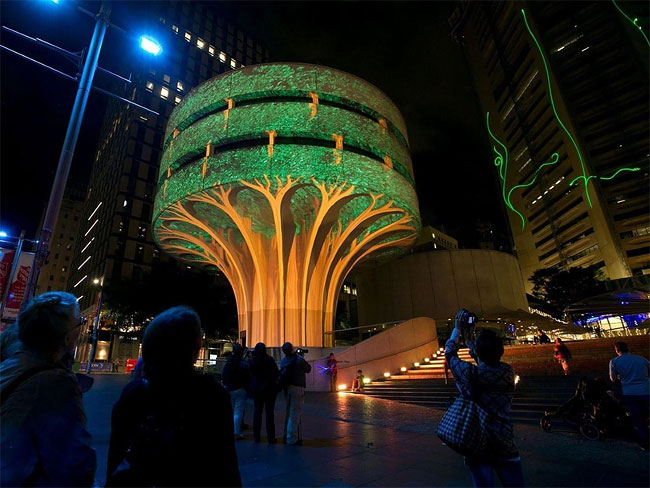 The Urban Tree Project is also part of the festival experience at Martin Place, where the MLC building has been transformed into a living tree.

"Build The Future" - Lego’s Brilliant Print Ads From The Cannes Festival
Artist Spray Paints Floors Of Abanoned Buildings With Colorful Tile Patterns
Hellfest Festival 2013
Madame Tussauds Exhibition Opens in Japan
"Superman"
Artist Spends Up to 8 Hours on Beautiful Sand Paintings that will be Swept Away by the Wind
Monster Made Out of Plastic Bags
The Cocoon Light Structures
The Mysterious “Mirror Man” in L. A.
Boryeong Mud Festival in South Korea
The Chase is Better than the Catchphrase
Cheetos for President
Harry Potter: The Exhibition
Art mashup. What would happen if there were no main figures and more!
Osama is Inside Everyone of Us
Out of Sync
Cercle et Suite D’éclats by Felice Varini
Sydney Beaches Turn Blood Red From Algae
2 Pieces of Modern Chinese Art
Costly Error
French Artist Turns Everyday Objects into Playful Characters
"Estuaire" and "Le voyage a Nantes" Art Events
A Giant Nuclear Mushroom Cloud Made of Steel
Recycled Art by Jane Perkins
festival, sydney, vivid

The Stoned Fox Forever
What is the WEEE Man and What does He Represent?
Star Wars Mashed Up With Classic Art
Into Papers
Sculptures by Bruno Catalano
Dr. Lakra's Mutant Laboratory
A Wind Turbine is Illuminated in an Installation by French Artist Patrick Raynaud
Pumpkin Fish
Unconditional Surrender
A Giant Rabbit by Florentijn Hofman
2007 ‒ 2023 by Design You Trust. Proudly hosted by WebHostingBuzz.
Privacy Policy · Terms of Service · Content Removal Policy ❤️ 🇺🇦