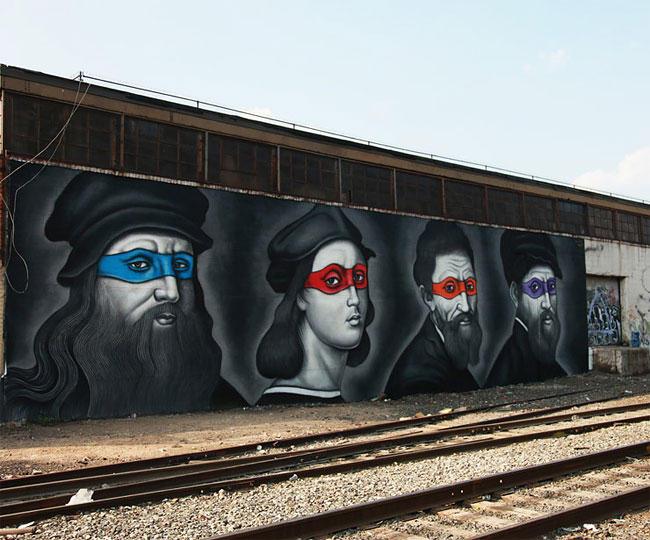 Owen Dippie has been restless lately in Brooklyn, cooling his heels and trying to stay invisible like a ninja while he waits for his big opportunity to slaughter a wall. He’ll need 5 days of good weather but New York is only doing 3 at a time, so he’s slicing between rain drops, sharpening his aerosol blades on this masked quartet by the railroad tracks. 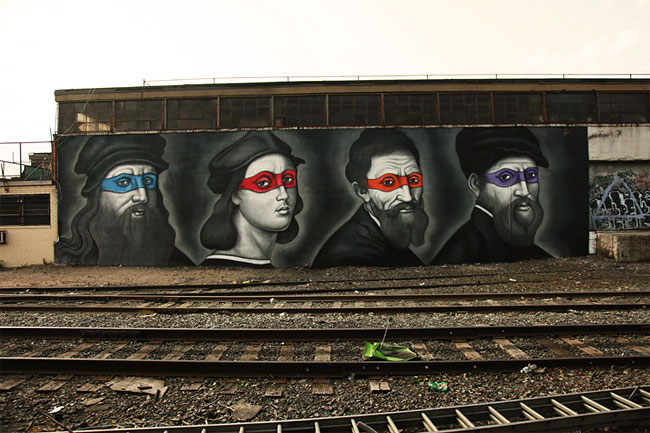 Not quite legendary yet, you can tell that it is well within his future province. Here we see that shinobi Dippie has just scaled these walls with Leonardo, Raphael, Michelangelo, and Donatello – not the turtles, but the Renaissance painters. A child of the 1980s and 90s in New Zealand, Owen loves the teenage mutants as well, so why not combine the Renaissance with modern cartoon crime fighters? 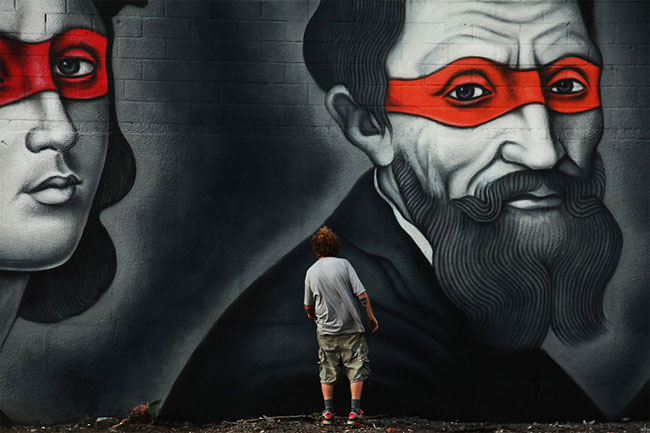 The only crime he has had to fight so far has been to rise above the stench of Bushwick trash ; a box of chicken carcasses rotting nearby is just one example of stuff that individuals and industry have dumped here. It’s of little consequence to him as he climbs the ladder because Owen is painting in the city of some of his other heroes – Tupac, Biggie, Basquiat, Haring. Today he met another hero – Charlie Ahearn stopped by. Last week he caught the Coney Island art walls that are going up by contemporary urban artists from the last four decades, many of whose work he has long admired. 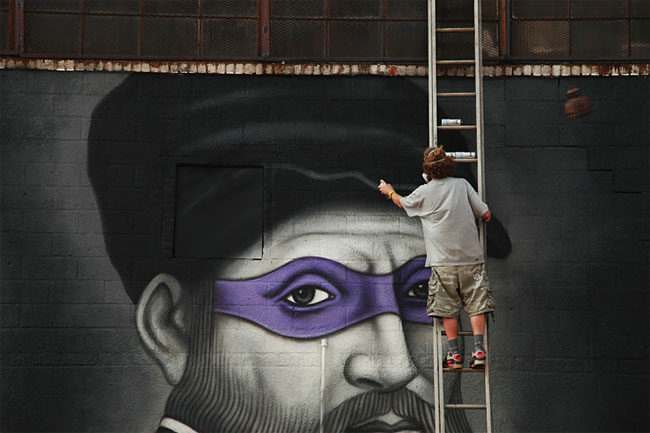 His own work here is not finished but he’s keeping a tight lid on his plans. An original all his own, he is determined, dedicated, contemplative. This modern renaissance will be continued in a large way before Owen Dippie races from NYC for further adventure on the US west coast. Like a ninja. Keep your eyes open. 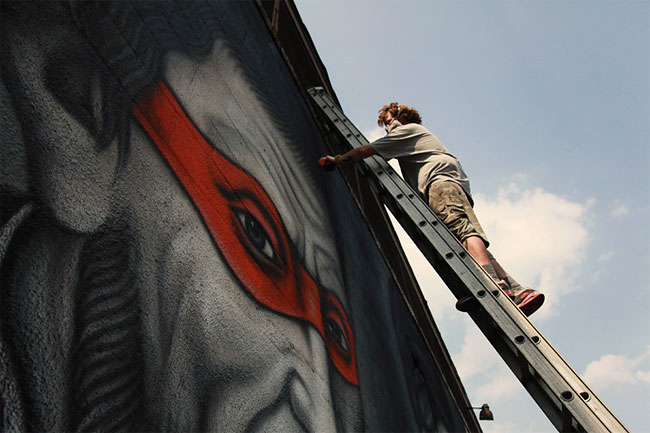 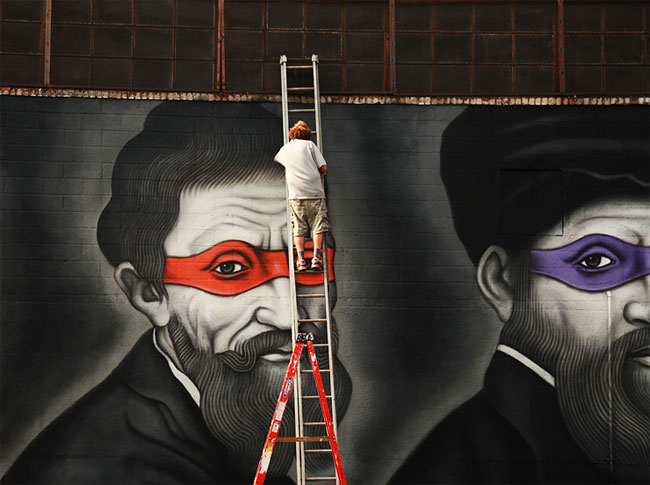 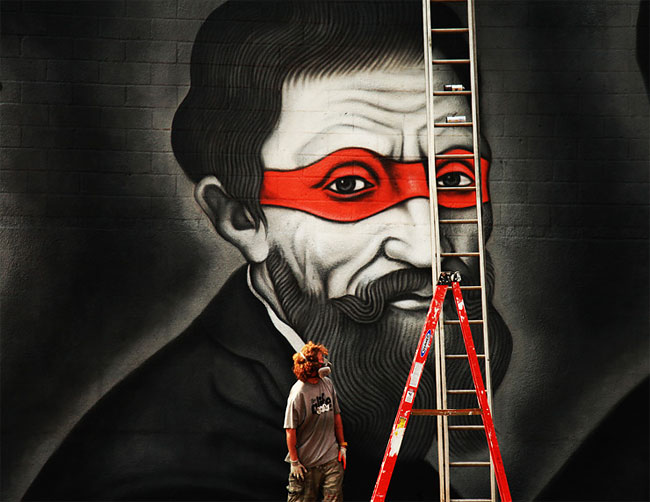 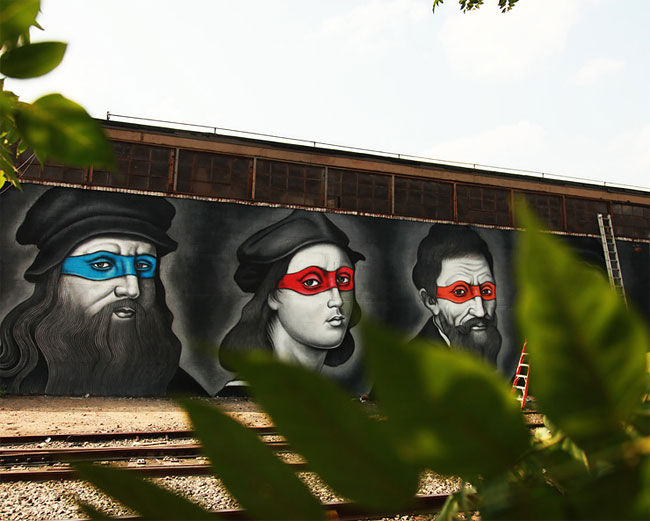 'Fantastic Beasts' Take Over St. Petersburg In Stunning Photo Manipulations By Vadim Solovyov
Shower To The People! Generous Man Turns Old Truck Into Mobile Shower For The Homeless
Artist Paints Creatures She Sees ‘Living’ In The Walls Due To Pareidolia
Artist ‘Vandalizes’ The Streets With His Fun And Unique Pixel Art
Safe Baby Pregnancy Tips: Simple Diagrams Help You Manage Your - Cravings, Fashion Choices, Mind-Numbing Labor Pain
Superb Vector Illustrations By The Polish Artist Krzysztof Nowak
Treebeard: Portraits Of My Friends With Plants Growing From Their Heads
Kurdish Dandies Start Iraq’s First Fashion Club
Artist Reimagined Famous Paintings To See What They’d Look Like If They Were Painted During The Coronavirus Crisis
Photoshop Master Showed Why We Should Not Believe Photos In Social Networks
“In A Parallel Universe”: Artist Exposes Sexism By Switching Up Gender Roles In Old-School Ads
Book Of Shadows: 2D Shape Cutouts Cast Silhouettes On Pages
Making Fun Of Hipsters’ Melodramatic Captions
Unique And Memorable Color Palettes To Inspire You
"I am who I am. And I have Down Syndrome."
Darth Vader and the Underworld: Kevin Cassidy's Brutal and Infernal Demons
Grandpa's Life: Cozy and Melancholic Paintings by Gary Bunt
"Journey to the East": The Superb Concept Art Works by Dom Lay
This Guy Can’t Stop Photoshopping Animals Into The Most Random Things
This Artist Turns Everyday Objects Into Surreal Pop Art Photo Collages
Beyond: Artist Imagines Of What The World Will Look Like If Quarantine Doesn’t End
Motivating Posters for Your Startup
Gisele Bundchen in New Inspiring Photo Session
Wonderfully Weird Paintings By Piotr Jabłoński
mutant, ninja, painted, renaissance, teenage, turtles