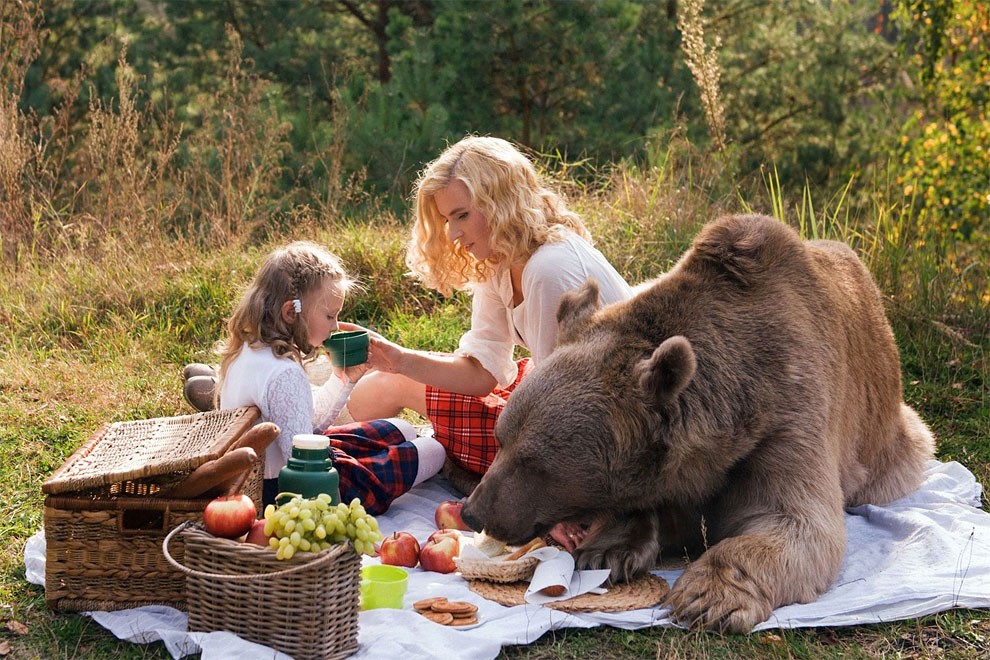 A MUM and daughter enjoy a quiet picnic in the countryside with a real-life teddy bear. 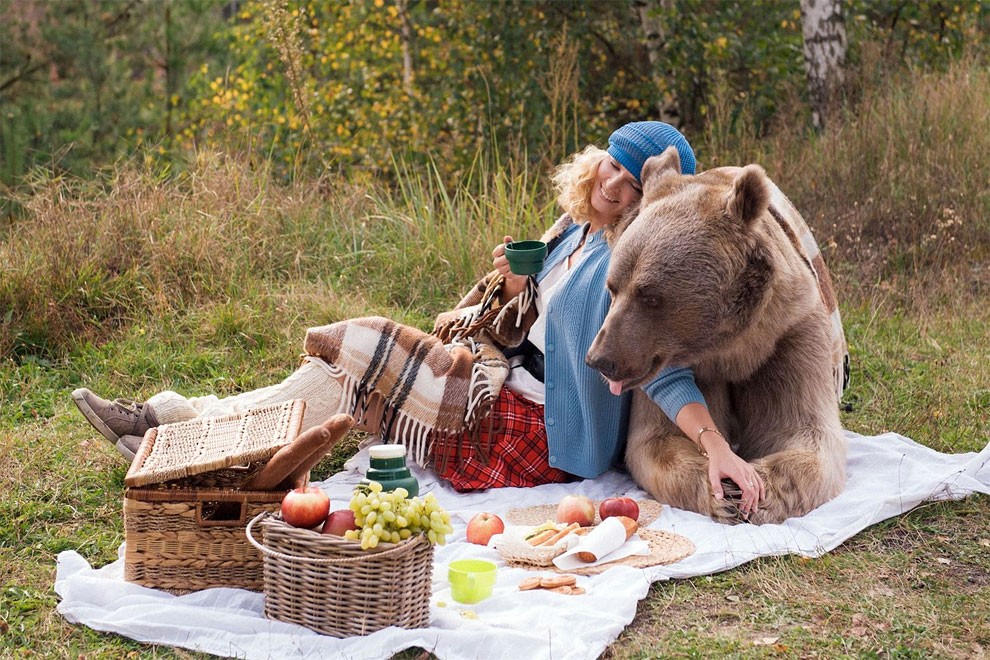 Model Irina was originally nervous about the shoot, which took place in Moscow, but after seeing how gentle the bear was asked if her daughter Katya could join in. 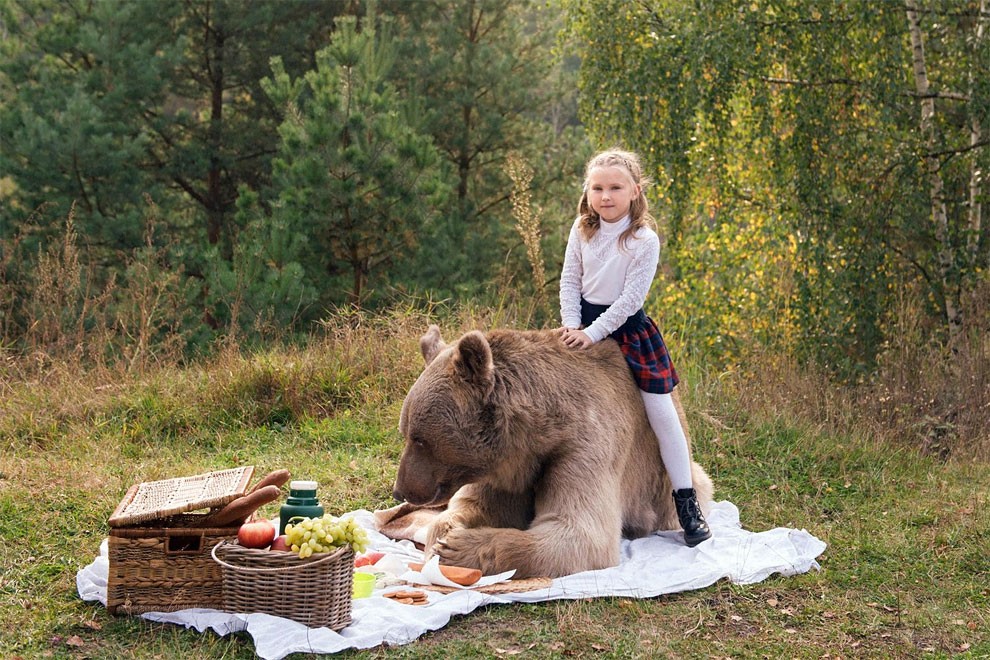 The tame bear, named Stepan, has been raised in a Russian couple’s home since he was abandoned at birth and has become very used to humans. 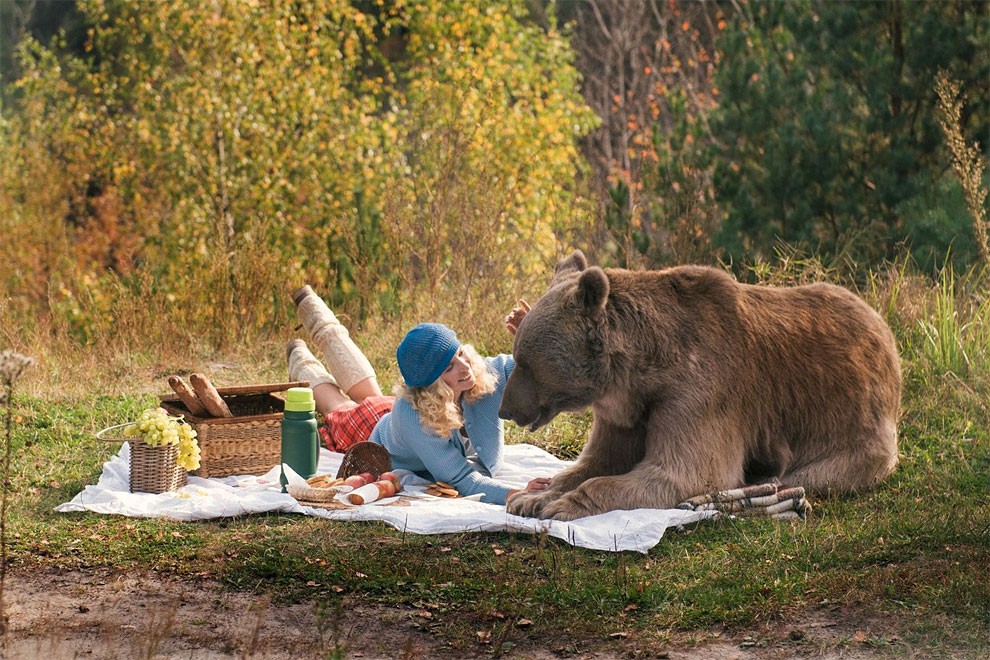 Irina gently strokes Stepan’s head as the pair lie together on a picnic blanket. 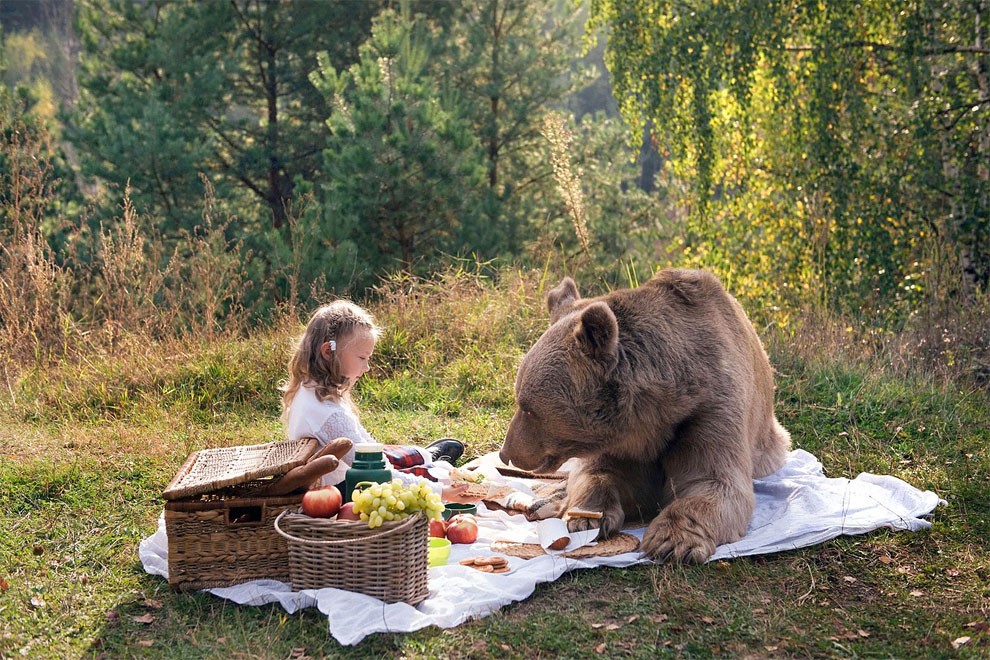 Katya and Stepan look like they make the best of friends as they share fruit and biscuits. 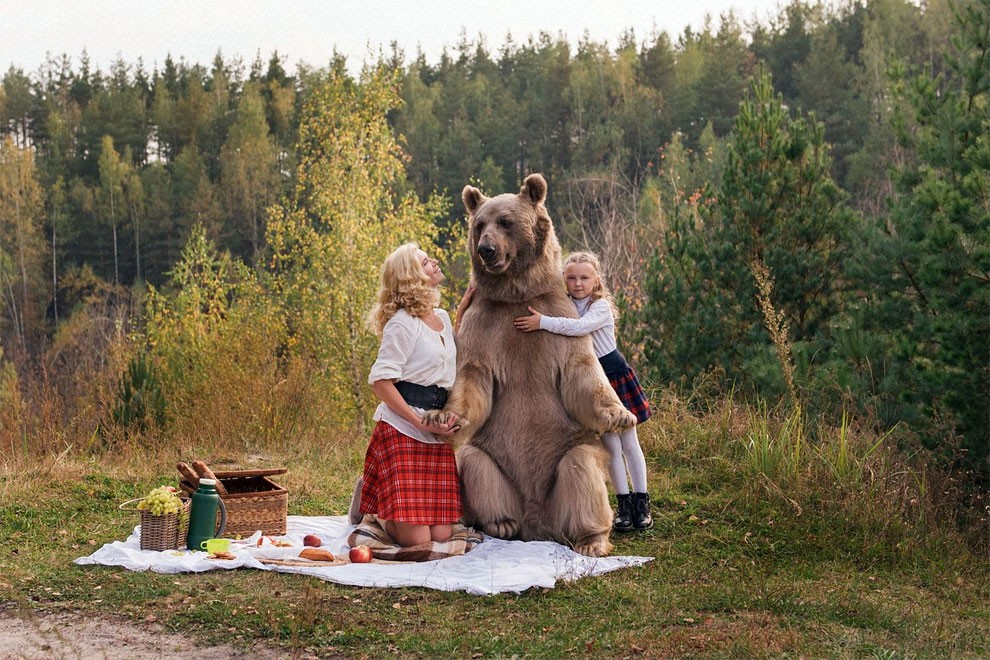 Katya gives Stepan a big “bear hug” as her mum takes hold of one of his powerful paws. 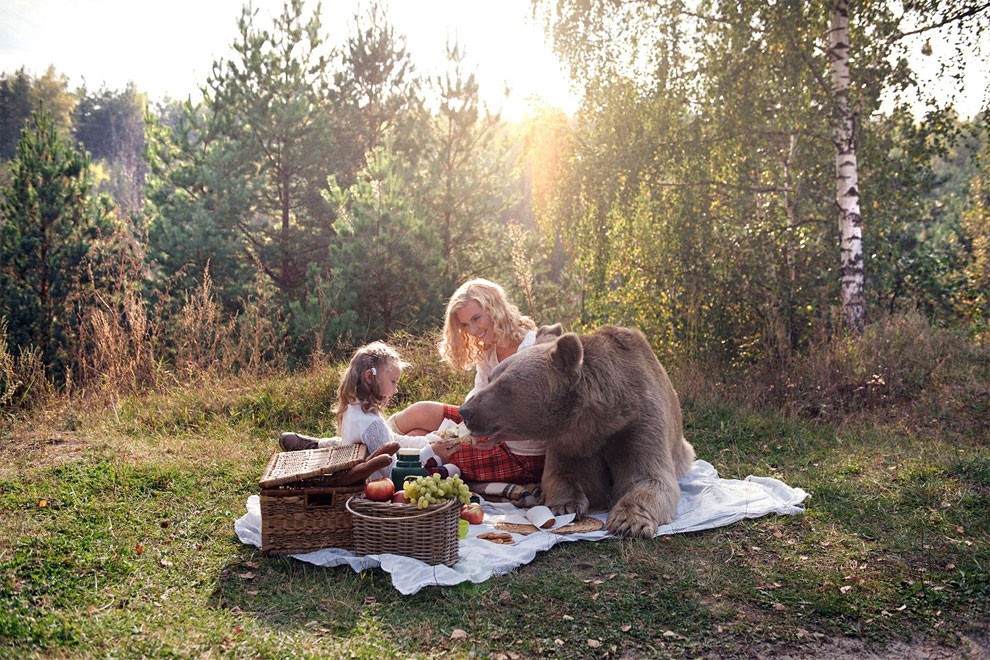 Katya holds out some food for Stepan to nibble on as her smiling mum looks on. 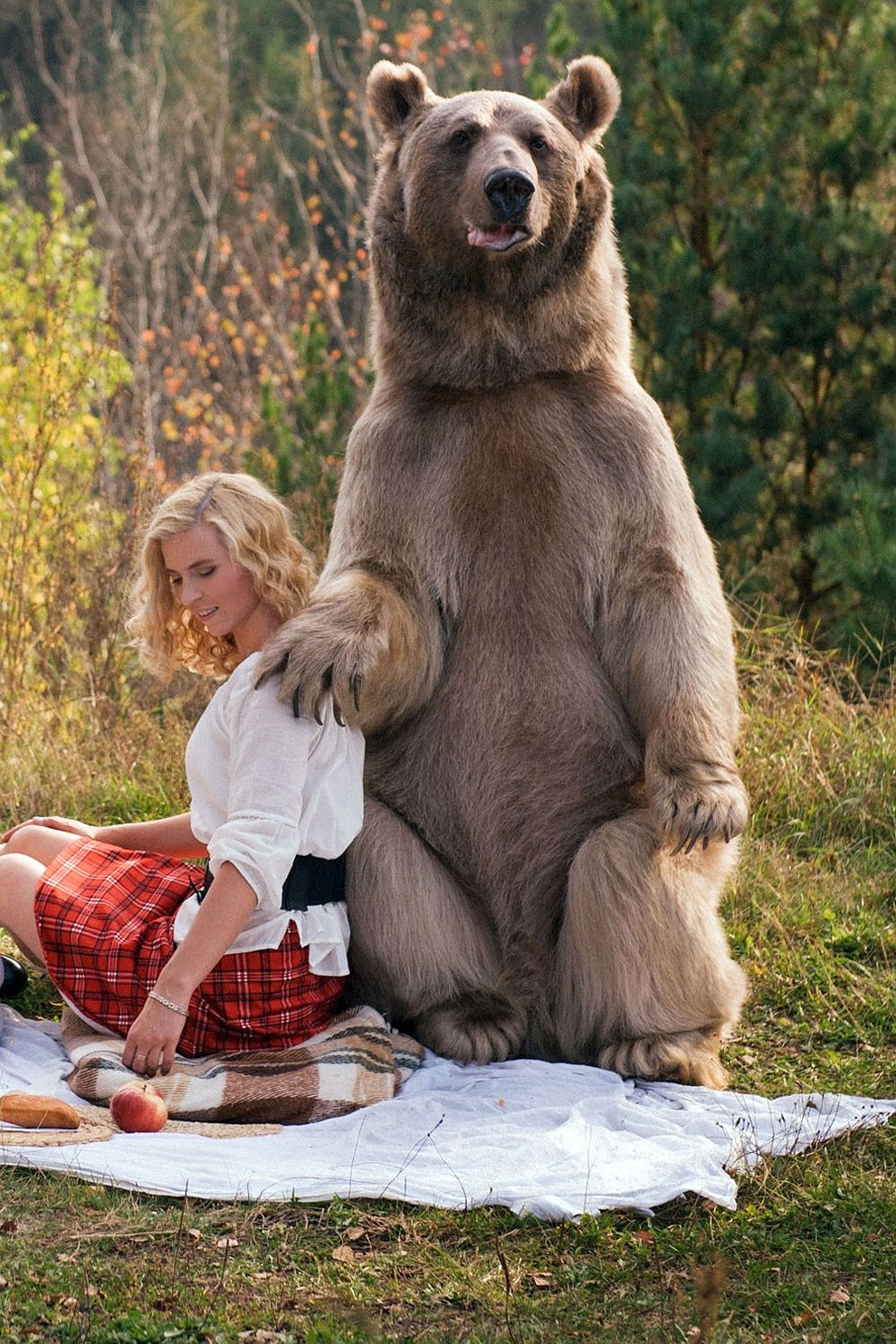 Stepan seems to have taken quite the shine to Irina as he puts a protective paw on her shoulder.

Oscar 'The Traveller Dog' Visits Most Famous Landmarks
South African Leopard Catches Sandgrouse
Living With Wolves
Child Breaks Model Father Was Working On, Mother Turns It Into Gorgeous Car Ruins
People Are Submitting Pics Of Their Pets To This Instagrammer, And She Gives Them Hilarious Makeovers
Poop Factory: The Best DIY Halloween Costume For Your Dog
The Urban Herons Of Amsterdam
A Young Elephant Calf vs Buffalo Bull in South Africa
Terrifying Portraits of Indonesia’s Street-Performing Macaques
Dog-Shaped Scratching Post Lets Cats Have Their Sweet Revenge
Hilarious Entries For The First Ever Comedy Pet Photography Awards 2017
Vintage Photographs of Christine Keeler Posing in a Swimsuit on a Beach in Spain and France, 1963
This Is What Peacock Feathers Look Like Under A Microscope
Chevrolet Has Another Life-Size LEGO Build, This Time Its A Silverado
These Thought Provoking Photos Show Why We Need To Improve The Standard Of The Worlds Zoo’s
A Photographer Has Created A Series Of Paw-Traits Of Hungry Dogs Pulling Hilarious Faces As They Try And Catch Treats
This Little Cat Got Stuck In Ice Puddle At Russian -35°C Harsh Weather
The Extremely Rare Black Leopard Confirmed In Africa For First Time In 100 Years
Meet Loki – The World’s Grumpiest Sphynx Cat
Bertie, the Agoraphobic Owl
Indian Photographer Nitish Madan Captures Breathtaking Moments From The Lives Of Tigers
Heartwarming Moment: A Husky was Freed After Falling Through the Ice on Her Morning Walk
Bionic Cat Vito Becomes 'Superstar' With His Prosthetic Legs
Norwegian Man Saving a Duck
brown, daughter, model, picnic, snaps, teddy