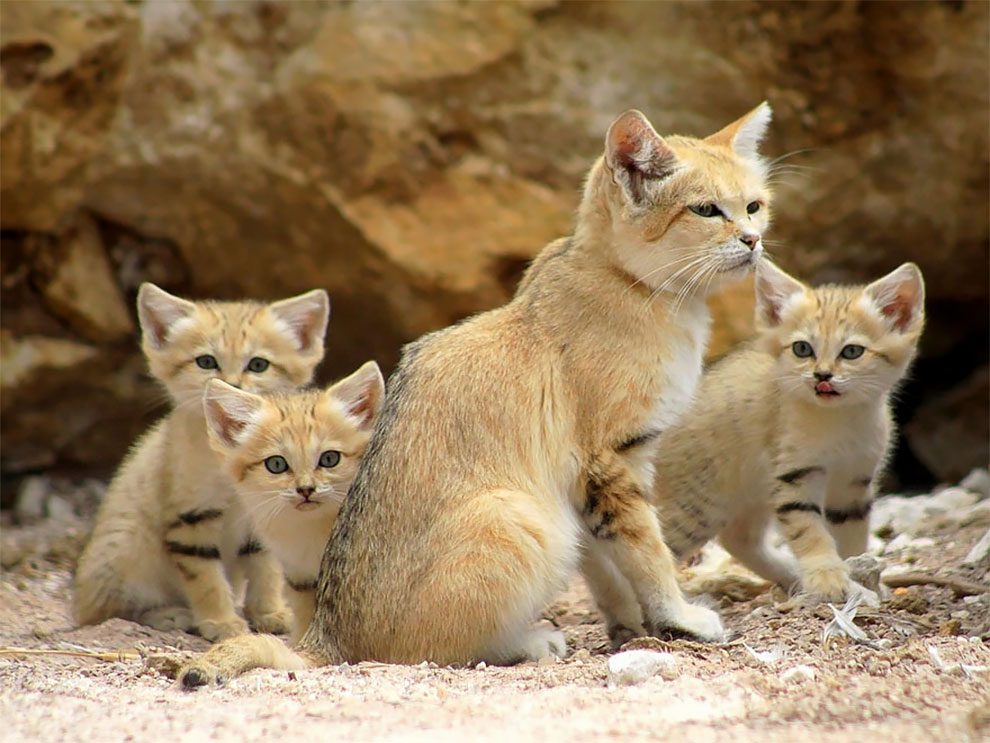 Sand cats are a small, solitary cat native to deserts in Africa and Asia. Superbly adapted to life in the desert, they can live without water, run on shifting sand and detect prey underground. 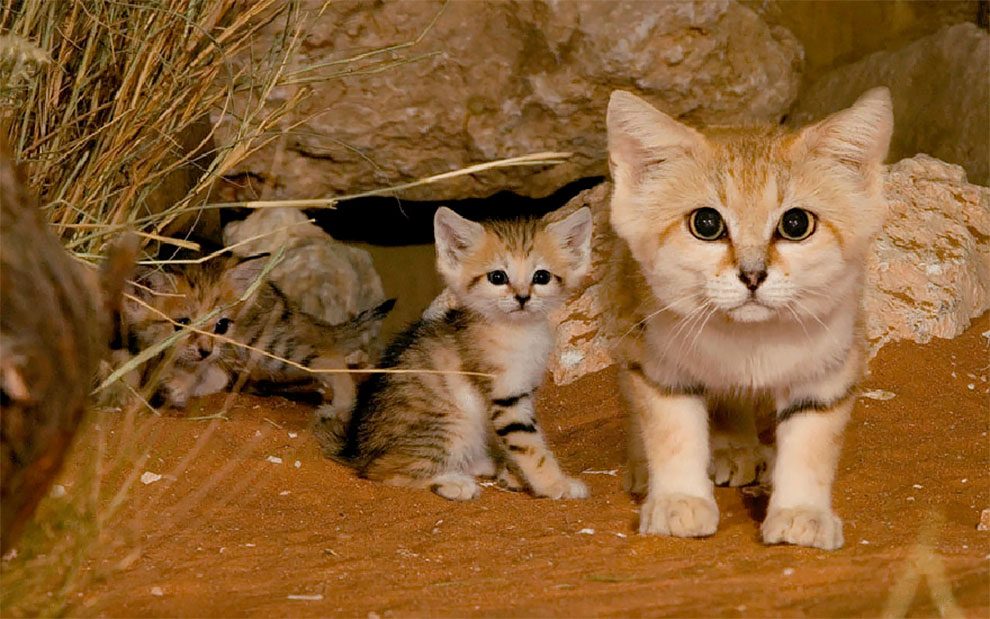 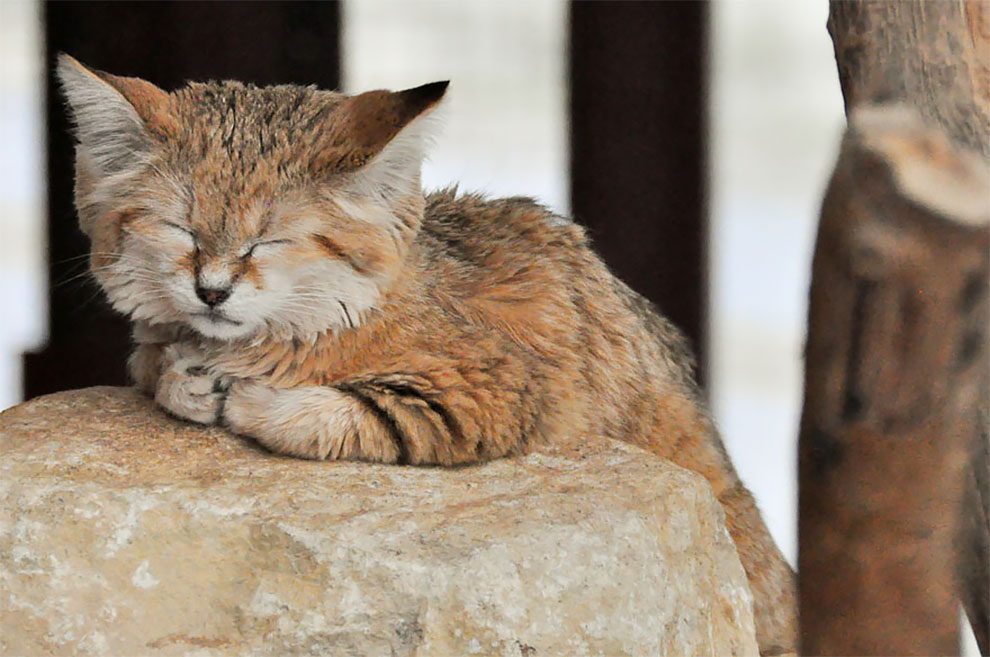 Sand cats live in three distinct regions of the world: Africa’s Sahara desert, which stretches through Algeria, Niger and Morocco; throughout the Arabian peninsula; and in parts of central Asia including Turkmenistan, Iran, Pakistan and Afghanistan. 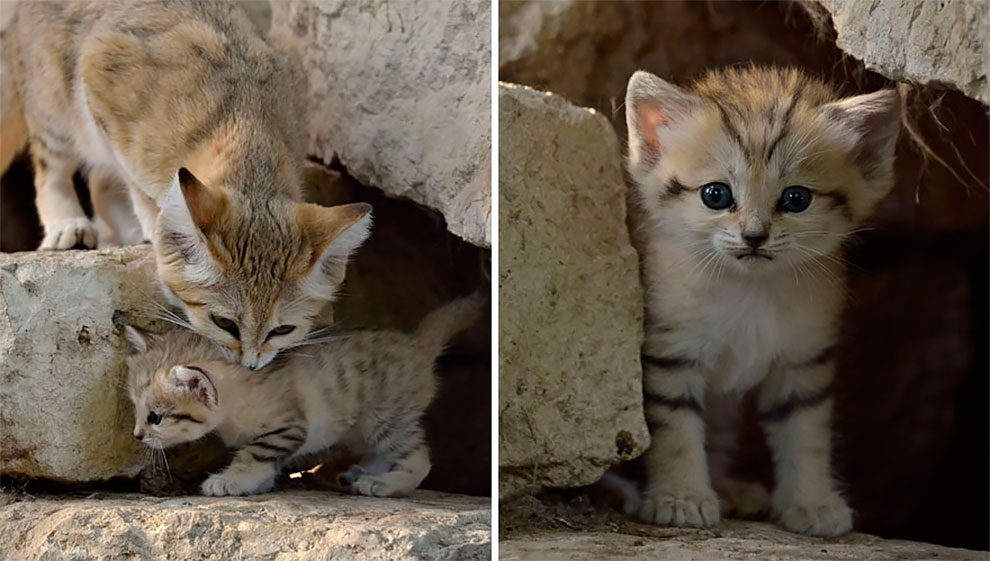 Sand cats prefer a very dry, arid habitat with little vegetation, for which they are well adapted. They are sand-dwelling creatures, inhabiting dry plains and rocky valleys where conditions are extreme. Surface temperatures can reach 124 degrees Fahrenheit (51 degrees C) during the daytime, then drop to as low as 31 degrees Fahrenheit (-0.5 degrees C) at night. This species prefers flat or rolling terrains, and will retreat to burrows when temperatures become too extreme. Due to the importance of burrowing and digging to sand cats, they are not found in areas where soil is compacted. 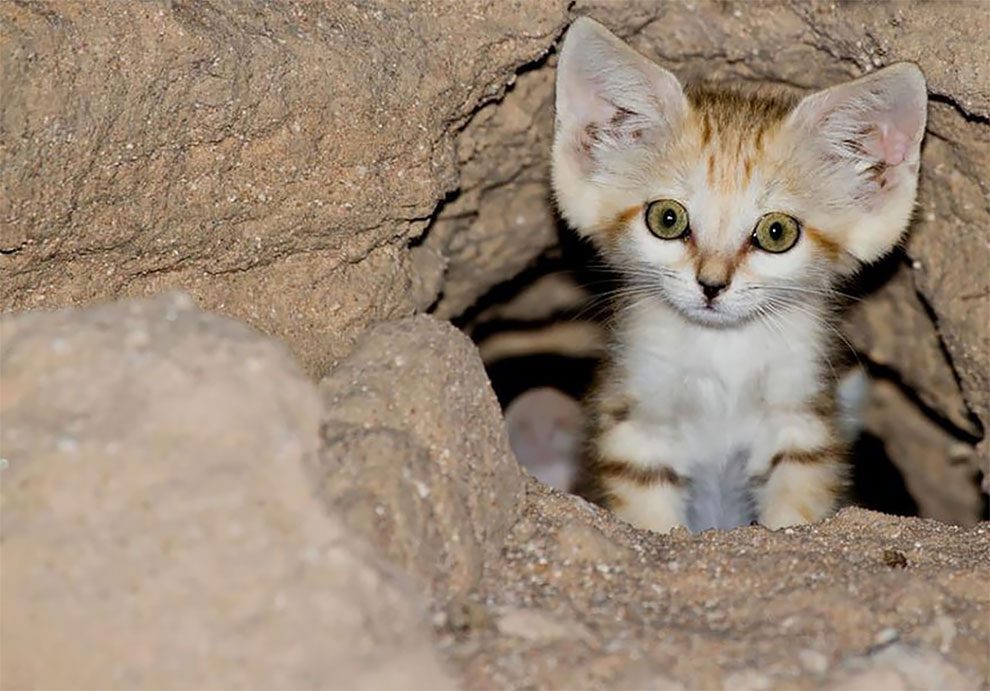 Sand cats eat primarily small rodents, occasionally hares, birds, spiders, insects and reptiles. They are fearless snake hunters—their prey can include venomous vipers and other snakes. Living in a relatively desolate habitat, sand cats are opportunistic feeders out of necessity. Like many desert-dwelling species, sand cats can survive without drinking water for weeks at a time. They will instead obtain any moisture they need from their prey. 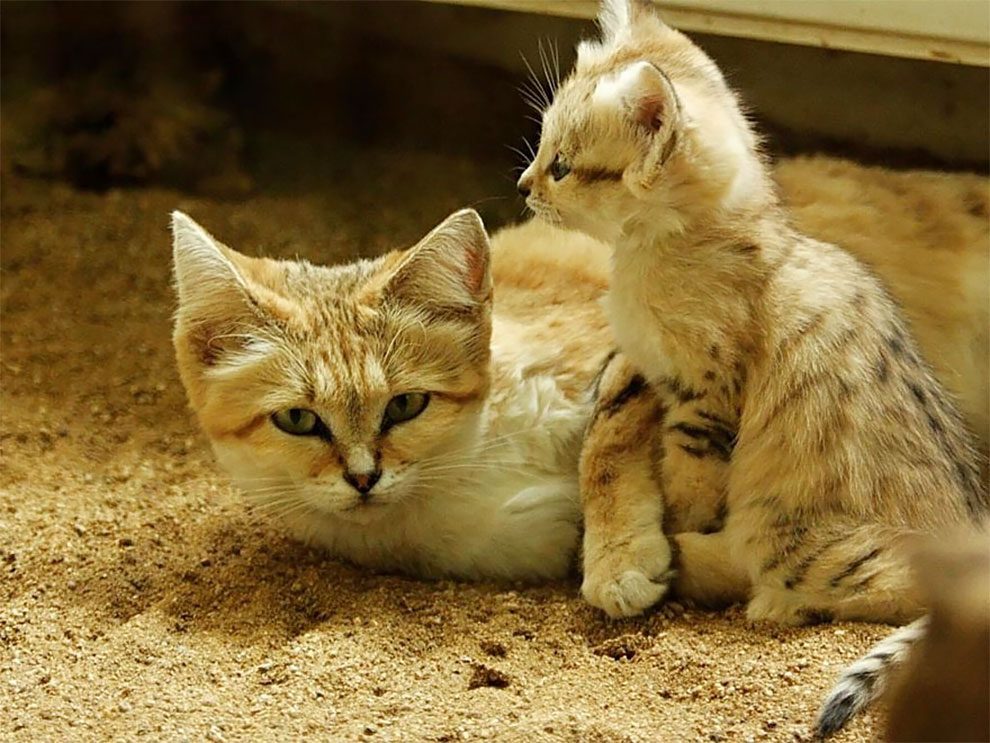 Sand cats hunt by skulking close to the ground and using their enhanced sense of hearing to detect prey. Sounds of a potential meal burrowing underneath the ground trigger sand cats to begin digging rapidly to expose and capture prey. Upon capture, they may cover its kill and return later to feed. 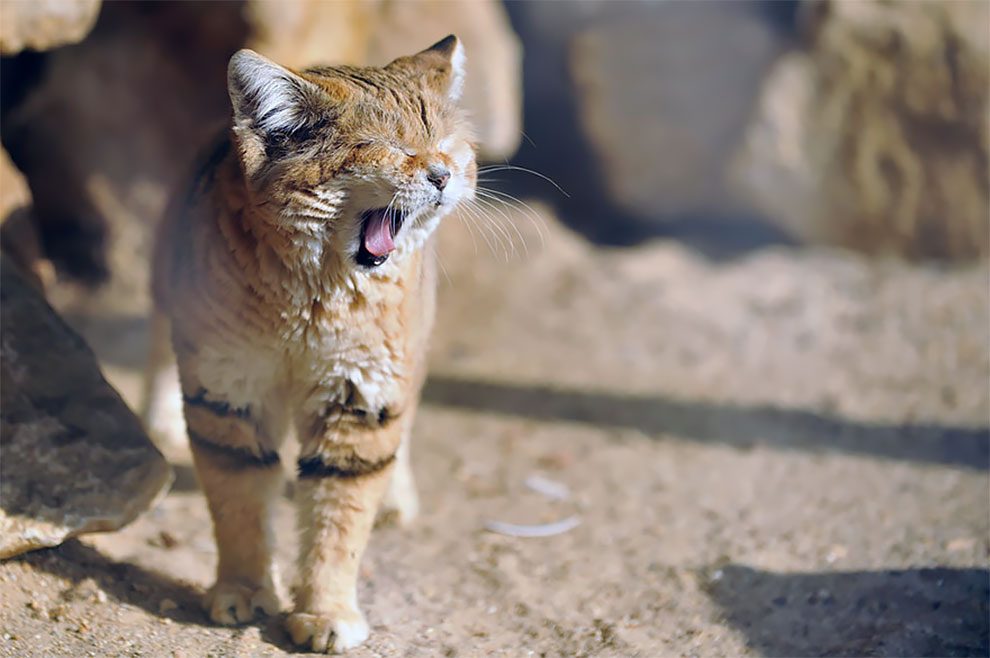 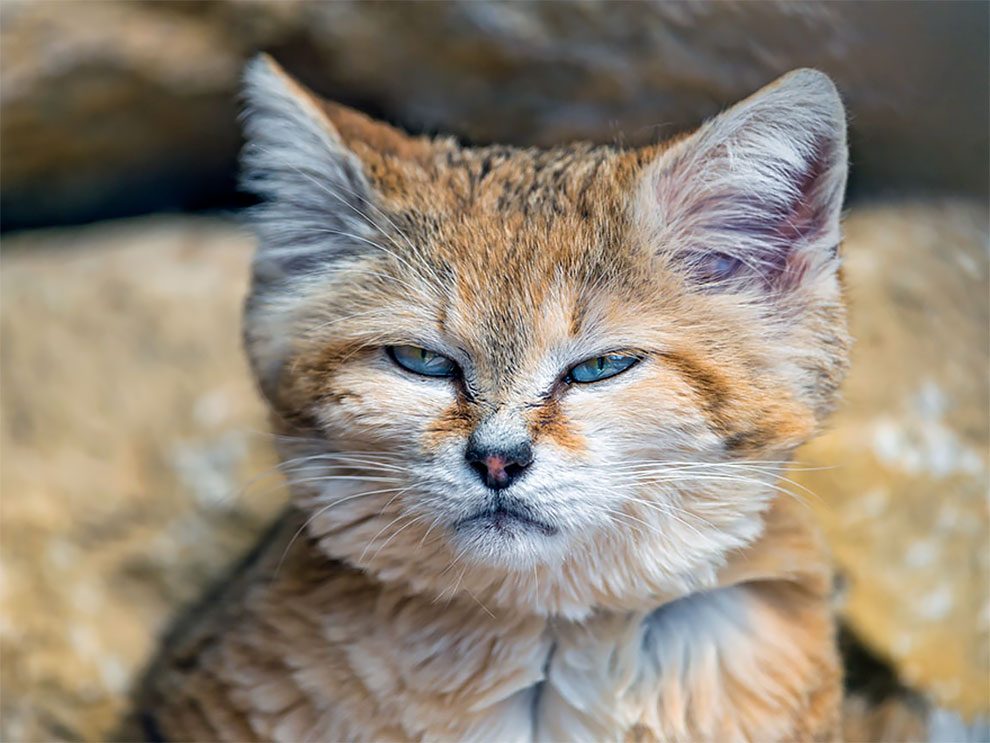 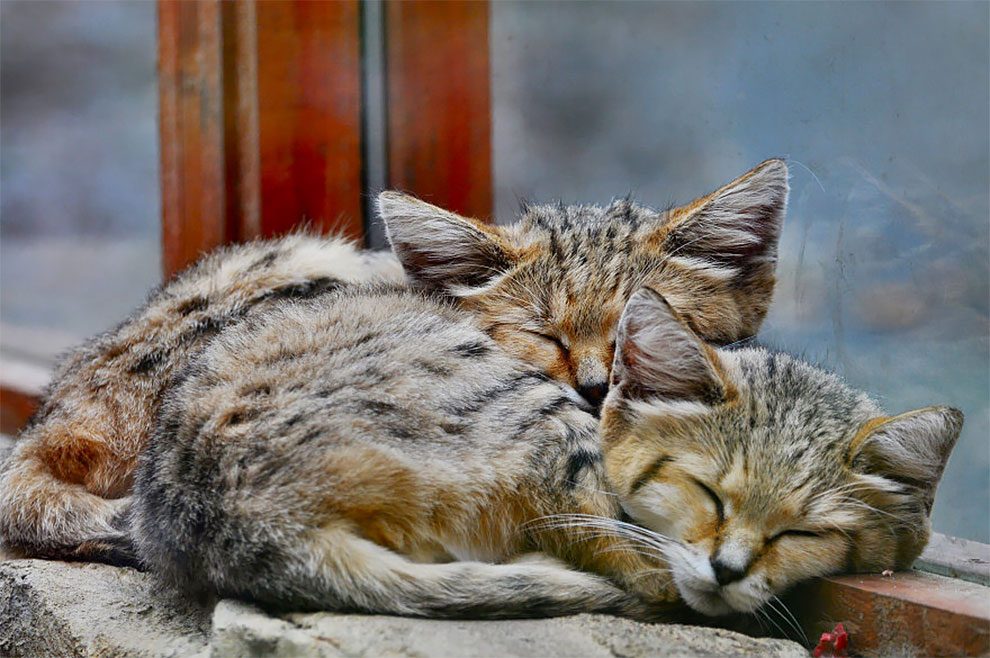 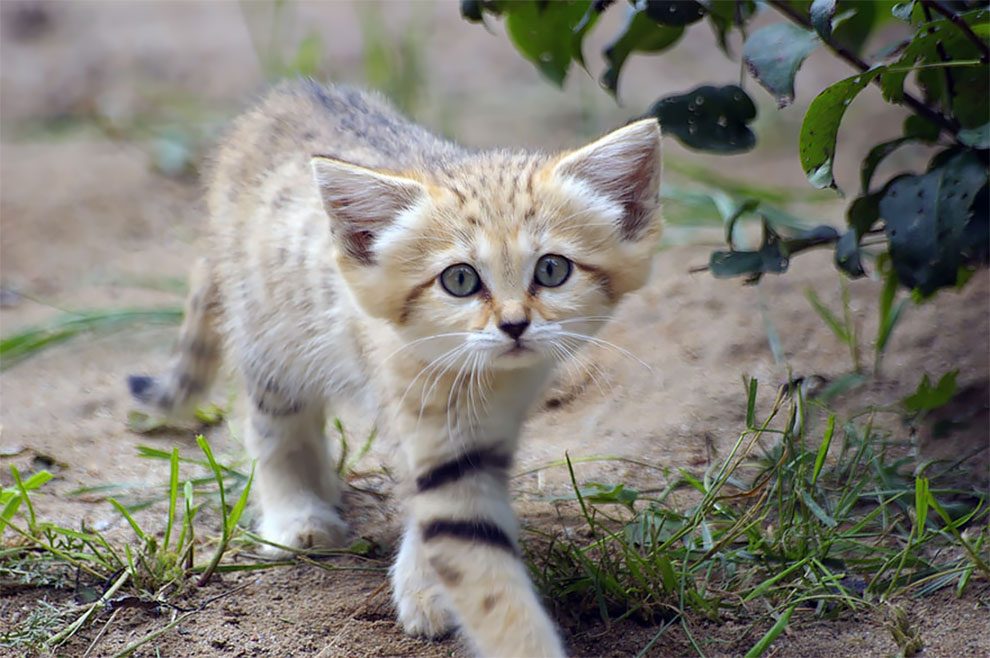 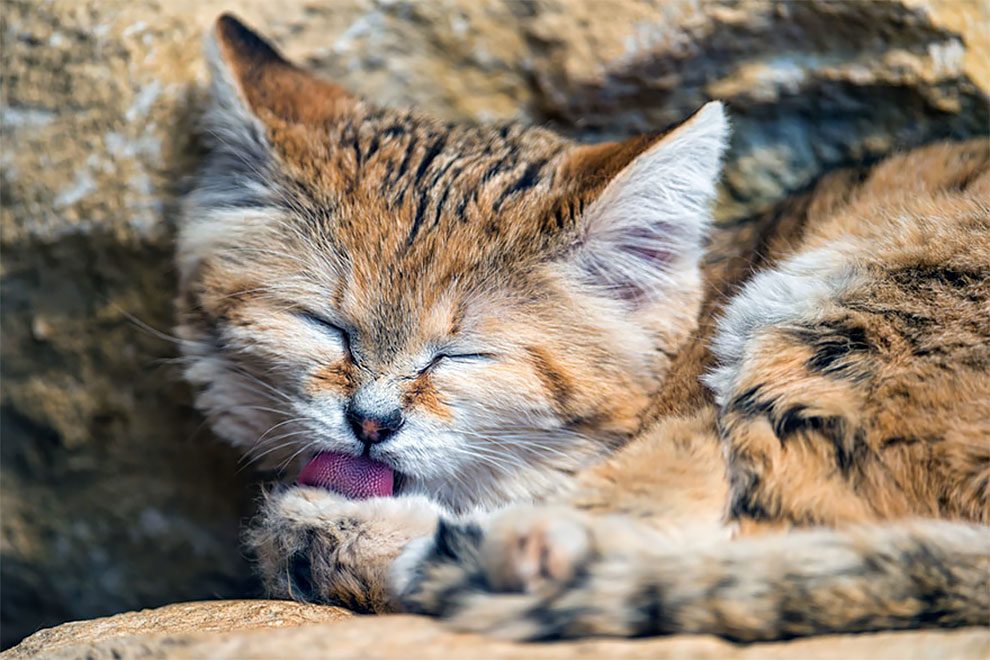 Snoopy the Cat
Taiwanese Shop Owner Installed A Glass Ceiling For His Cats And Now They Won’t Stop Staring At Him
This Little Cat Got Stuck In Ice Puddle At Russian -35°C Harsh Weather
This Man And His Cat Recreate Famous Movie Scenes And It's Amazing!
Vancouver Cops, Four-Legged Pals Pose For 2019 Police Dog Charity Calendar
Meet the Lykoi: An Odd New Breed of "Werewolf" Cats
This Monkey Street in Bangkok is Full of... Street Monkeys, and They're Frisky!
The Japanese Use a Real Rabbits As Case For Smartphone
Yana, The Two-Faced Kitty Whose Parents Ran Out Of Ink
The 2019 Australian Firefighter Calendar Is Here And Still The Hottest Way To Raise Money For Charity
The Good Person of Aleppo
Here's A 3D Animal Print Underwear With Ears!
Polar Bear Floats Adrift Surrounded by an Endless Sea of Icebergs
Feel Your Heart Melt into Bubble Bath at a 'Wet Dog' Photo Series
The Cutest Panda Ever
Photographer Julia Christe Snaps Of 'Flying' Dogs In Mid-Air
2022 Dog Shaming Calendar Is Here!
"Cats In Hats"
Ugly Medieval Paintings Of Cats
The Algonquin Hotel In NYC Has A Kitty Concierge Named Matilda
Meerkats Use Photographer As Lookout
The World’s Most Romantic Gallery Of Insect Sex
Reuters Pictures Of The Year 2018: Animals
This Guy Makes 3D Printed Helmets For His Cat
Sculpture Of Istanbul’s Social Media Phenomenon Cat Tombili To Be Inaugurated
Meet The Cutest Fish Vendor In Vietnam Who Is Taking The Internet By Storm With His Adorable Pics
Orphaned Raccoon Thinks She's a Dog After Being Rescued and Raised by Family with Dogs
Single Guy Recreates His Twin Sister’s Baby Photos Using A Cat
Annual Flamingo Count in Spain
Photographer Leila Jeffreys Captures The Diverse Beauty Of Naturally Colorful Birds
adults, kittens, species, their, there, where