This Is Strange But True 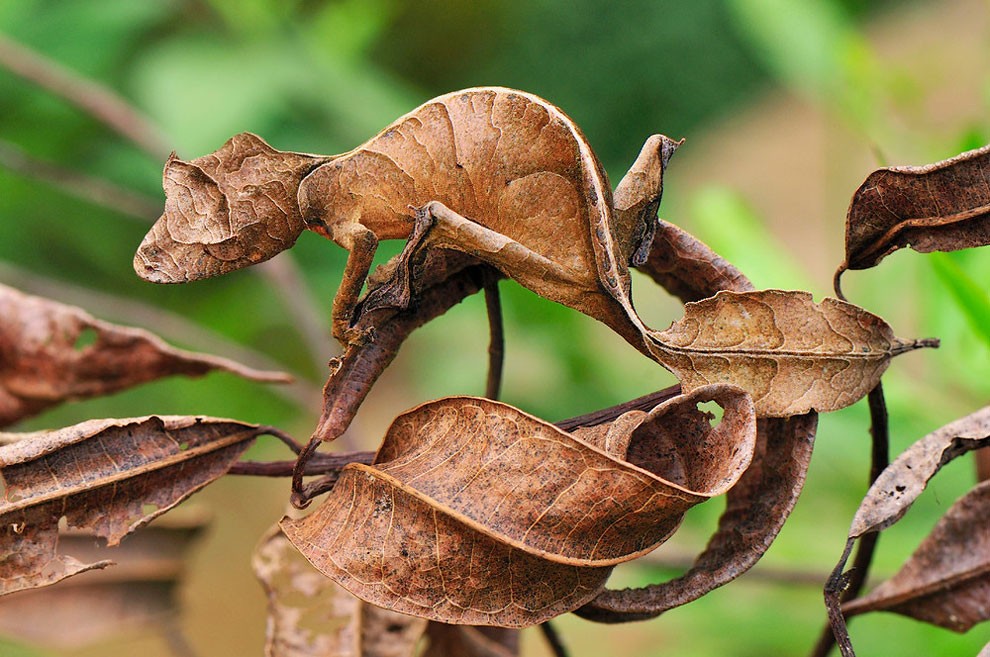 Is it a leaf? Is it tree bark? No, it’s the Satanic leaf-tailed gecko. Cleverly disguised as a rotting leaf, Madagascar’s camouflage king has red eyes, pointy horns and a taste for night hunting: it’s nature’s most devilish deceiver. The twisted body and veiny skin echo the detail of a dry leaf, which ensures the gecko blends in with its forest home. The mottled tail appears to have sections missing, as though it has withered over time. This mini-monster epitomises survival of the fittest, having adapted gradually to become today’s extraordinary leaf impersonator. (Photo by Thomas Marent/ARDEA) 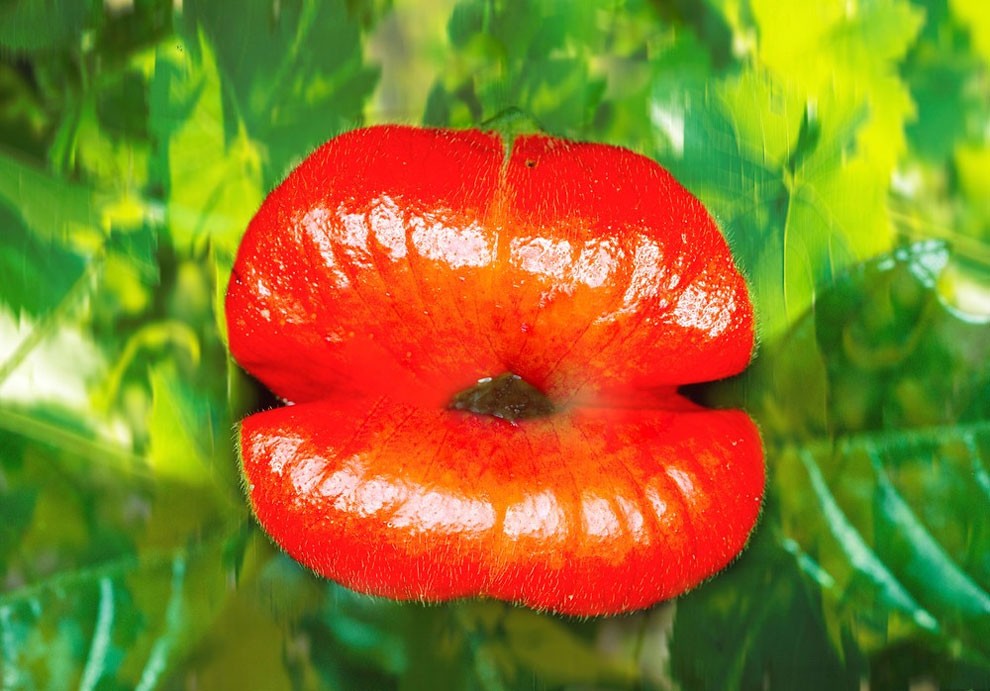 This plant may look like it is puckering up for a saucy smooch, but it is really saving all its love for hummingbirds and butterflies. Psychotria elata is the scientific name for the hot lips plant, which flowers in the humid forests of Costa Rica, Panama, and Colombia. Called bracts, the glossy red leaves are the perfect colour to catch the eye of pollinators because butterfly and hummingbird eyes are very sensitive to red light. As butterflies and hummingbirds land on the flowers to drink nectar, they transfer the pollen from flower to flower. This is essential for the plant’s reproduction. (Photo by Dr. Morley Read) 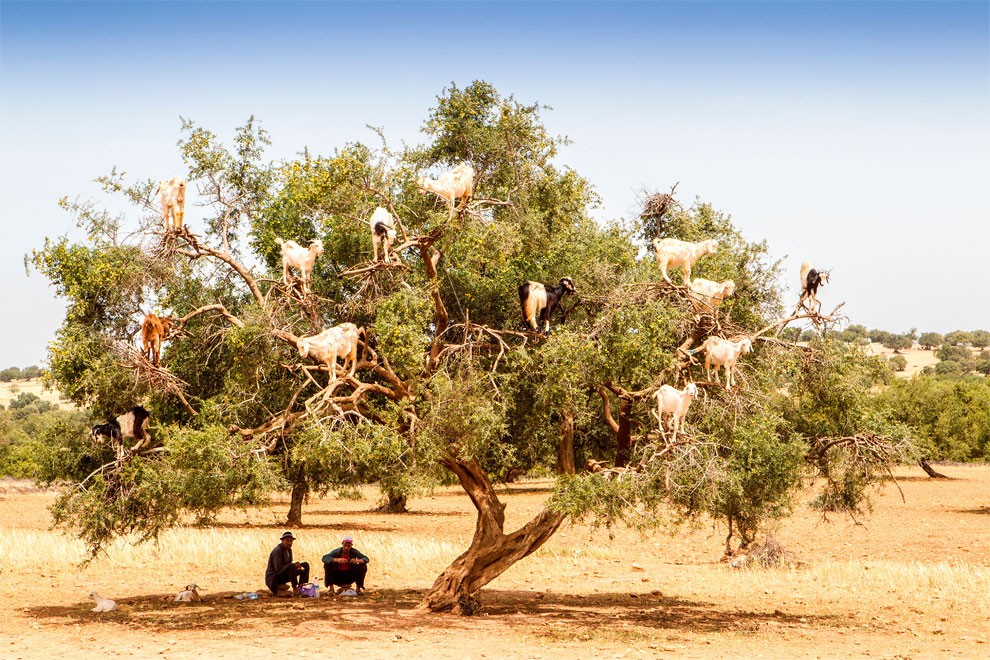 Goat gymnasts – the goats of Tamri village in Morocco show great agility in searching for their favourite food. These nimble nibblers claw, jump and scramble up the argan trees to reach their beloved berries, setting in motion a practice that’s been around for centuries. The olive-like argan berry is perfect nourishment in an area where food is scarce. The Tamri goats can climb 9 m (30 ft) up to the tree tops. (Photo by Paul Strawson/Alamy) 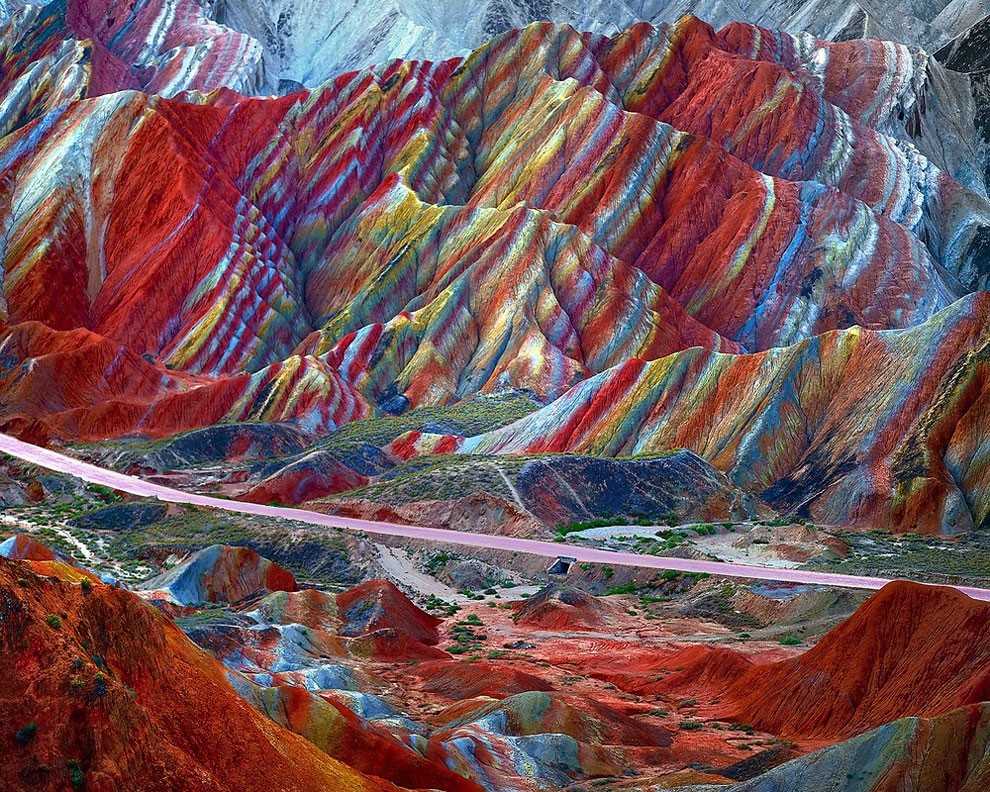 There is no need to roll out the red carpet at Daxia in China’s Gansu Province. The jaw-dropping rocky landscape is naturally red from a build-up of sandstone over many millions of years, while the rainbow effect comes from colourful mineral deposits. Sandstone and red mineral deposits were compressed into multi-coloured layers of rock. Movement of the giant plates that form Earth’s crust pushed, cut, and folded the layers. The name Danxia means “rosy clouds” in Chinese. (Photo by Imaginechina/Corbis) 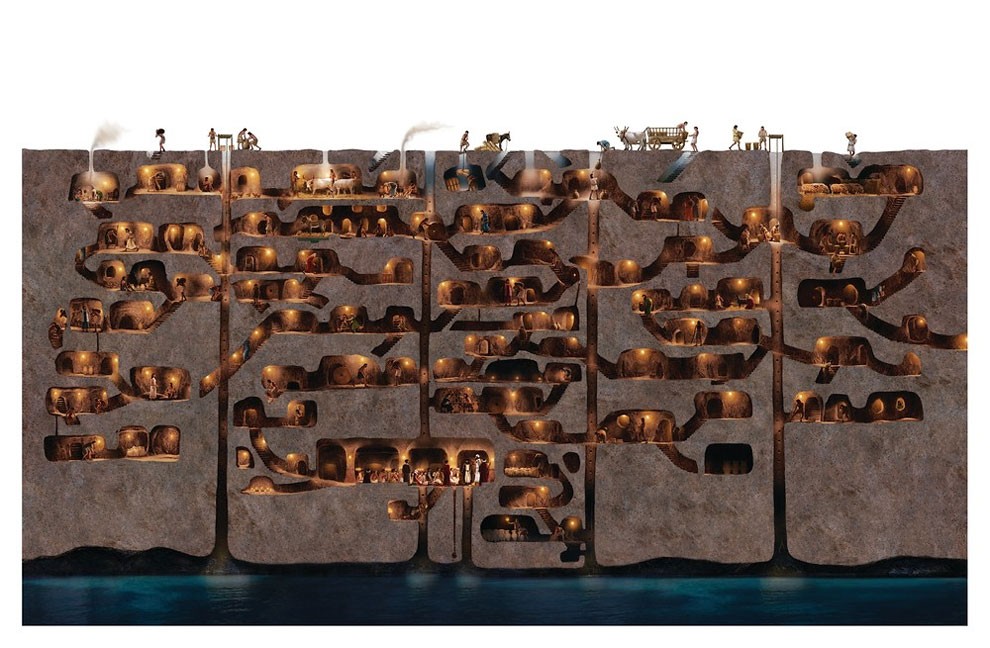 Turkey’s ancient underground caves of Cappadocia were once inhabited cities. Steep, hollowed hillsides mask a secret subterranean world. The deepest of Cappadocia’s underground cities, Derinkuyu, had sleeping quarters, communal rooms, bathrooms, cooking pits, wells, ventilation shafts, churches and stables for animals. Historians believe this was the hiding place for early Christians trying to flee persecution from the Roman Empire. At its peak, the city may have housed up to 20,000 people. Derinkuyu is about 85 m (279 ft) deep, carved out of volcanic rock. (Photo by Stuart Jackson Carter) 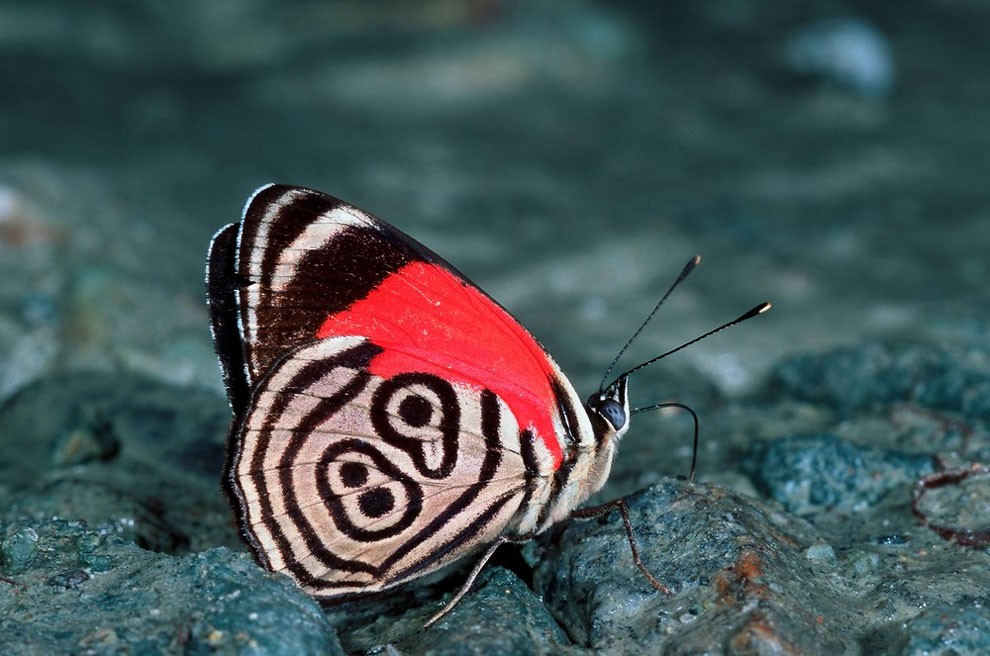 Considered a sign of good fortune in its native Central and South America, the Callicore butterfly’s lucky numbers are 88 and 89. Emblazoned across each wing, the striking digits help the species to attract mates amidst the flora and fauna. The exact markings of the 88’89 butterfly depend on the specific subspecies. There are 12 types, with the marking taking a different form, colour and shape each time. (Photo by Thomas Marent/Getty Images/Visuals Unlimited, Inc.) 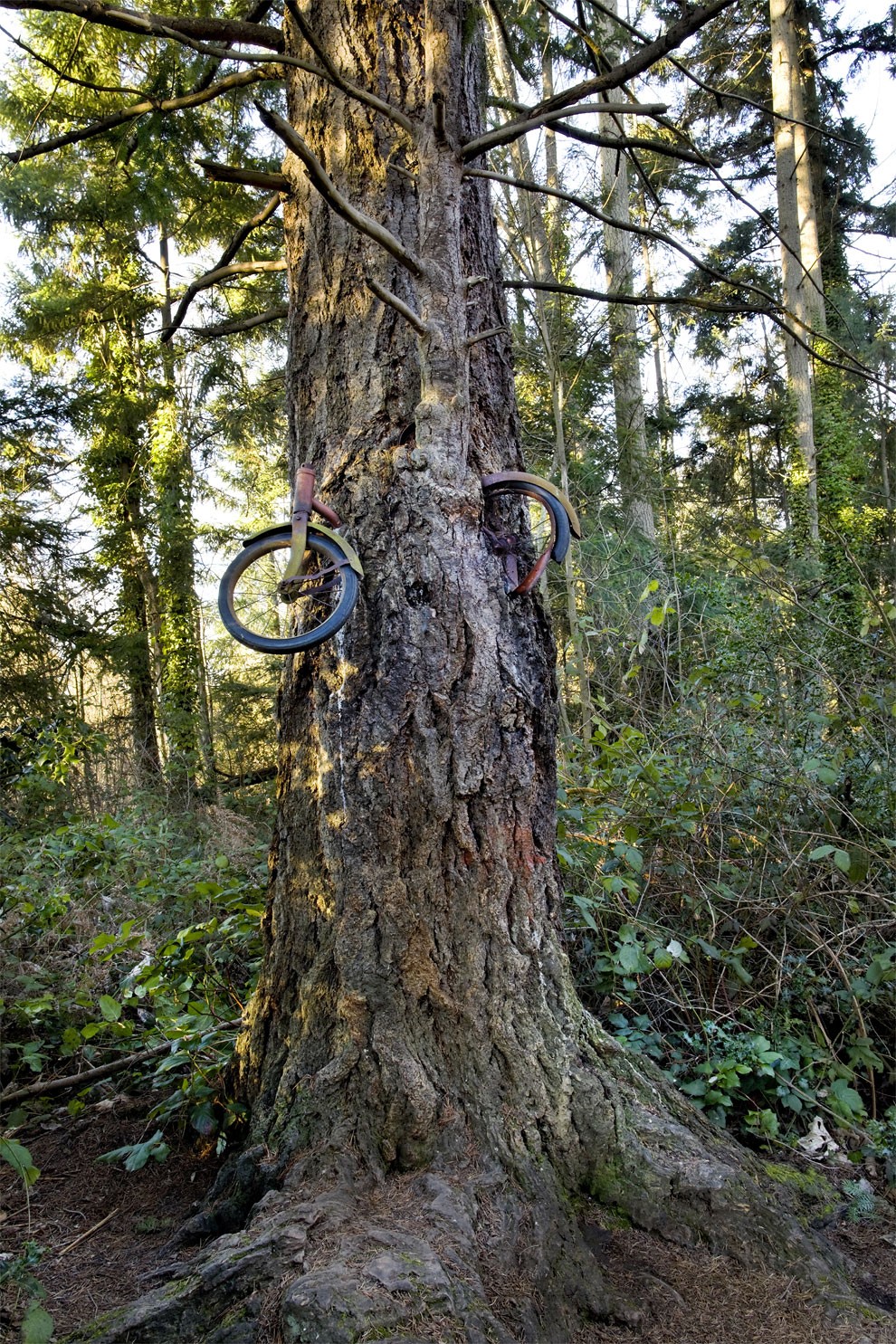 Whoever got on this bike definitely reached the end of the road. A tree can grow slowly around an object placed, on, in or close by it. The tree cannot move away so it has to stop growing, grow away, or grow around the object when its trunk increases in size. It takes decades for an object to be truly stuck. The riddle of the bicycle up a tree is legendary in Vashon Island, USA. One story goes that a boy tied his bike to the tree before going to war in 1914, while town sheriff Don Puz is sure he left the bike behind in the 1950. Sceptics insist it is nothing more than a hoax. (Photo by Spaces Images/Getty Images/Blend Images RM) 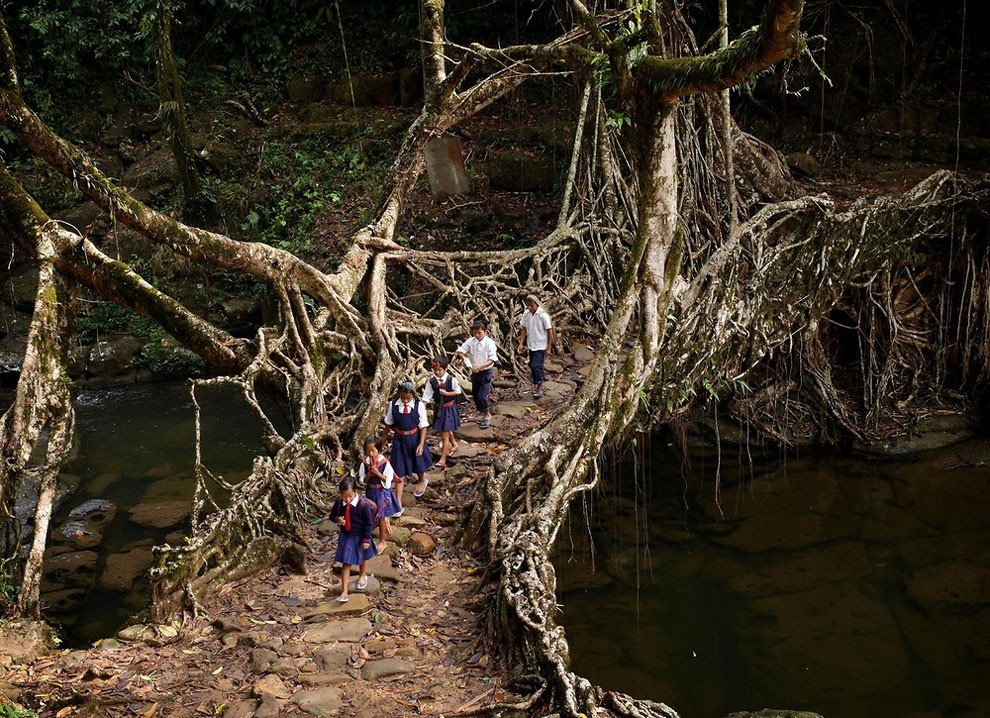 In the forests of north-eastern India, rivers and streams are crossed using structures crafted from ancient banyan trees. Forged by tangled roots and vines, these living tree bridges are both a natural wonder and an engineering masterclass. Cherrapunji is one of the world’s wettest places, so normal wooden structures would rot and break. Living bridges avoid this problem. By carefully guiding the strong, thick tree roots across rivers and voids, local Khasi people have grown permanent crossings that only get stronger over time. Planning is required: they take 10 to 15 years to grow. (Photo by Amos Chapple/Rex Features) 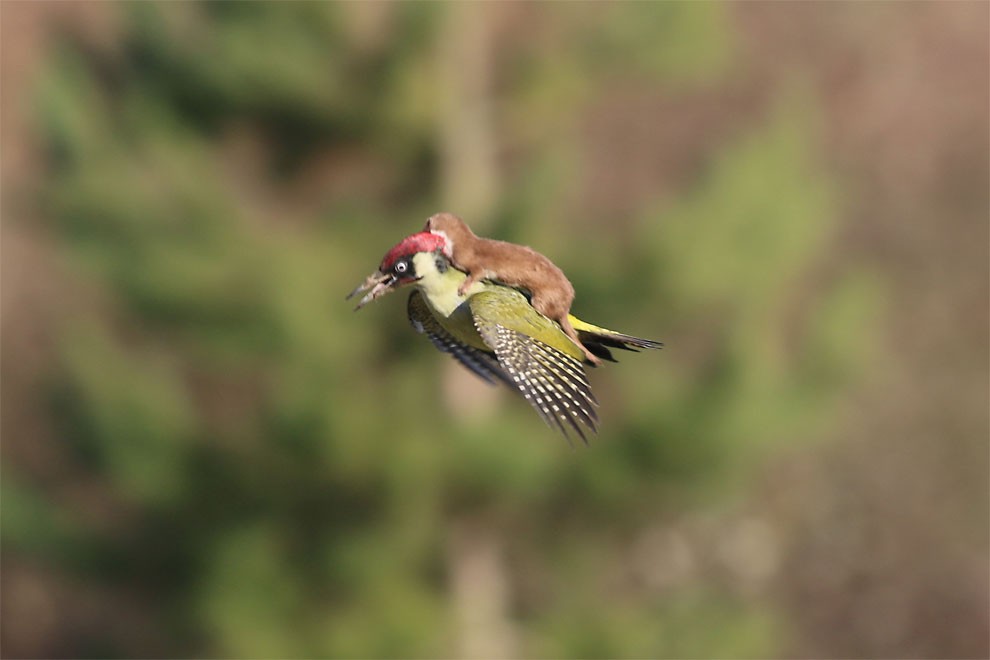 In 2015 amateur photographer Martin Le-May shot this image in Hornchurch Country Park, London, UK, but the picture doesn’t tell the full story. The weasel attacked the woodpecker and refused to give up even when the bird took flight. An aerial scrap ensued before the weasel tumbled and the woodpecker escaped. A sign now marks the spot where the sensational snap was taken. (Photo by Martin LeMay) 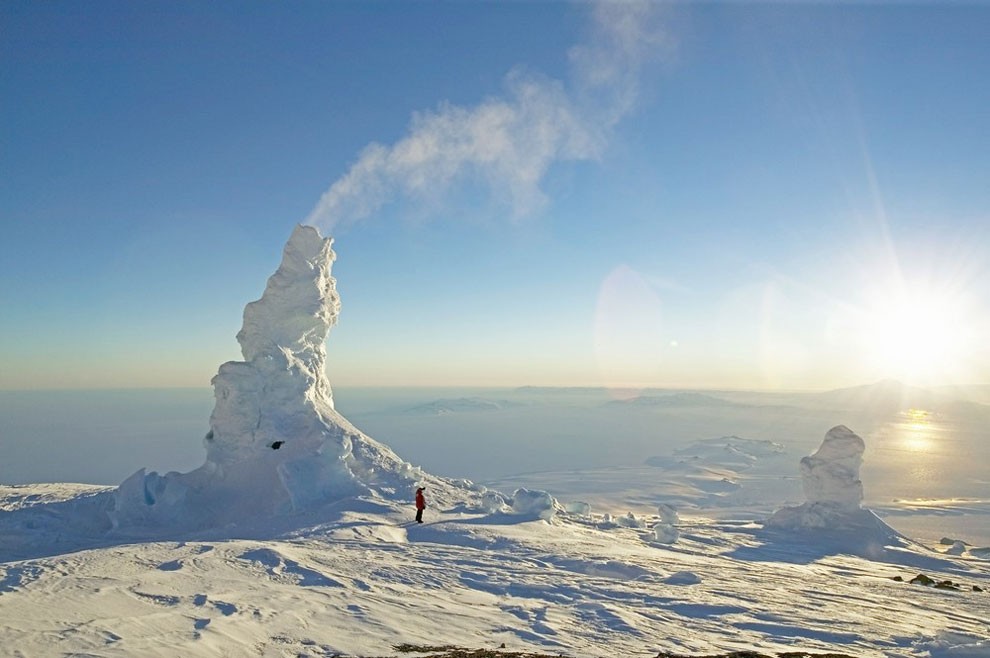 Winter wonderlands can be home to the unexpected sight of snow chimneys, or fumarole, puffing steam into the sky. These steaming vents in Earth’s surface always occur in regions with active volcanisms. They work in a similar way to geysers: underground water meets magma and its heated until it boils and bursts through cracks in the rock, making its way to the surface. A fumarole has a smaller reserve of water so emits only steam. In the Arctic areas, the exiting steam freezes, forming vast snow chimneys around the volcanic opening. Gas can be released for centuries or just a few weeks. (Photo by George Steinmetz/National Geographic Creative) 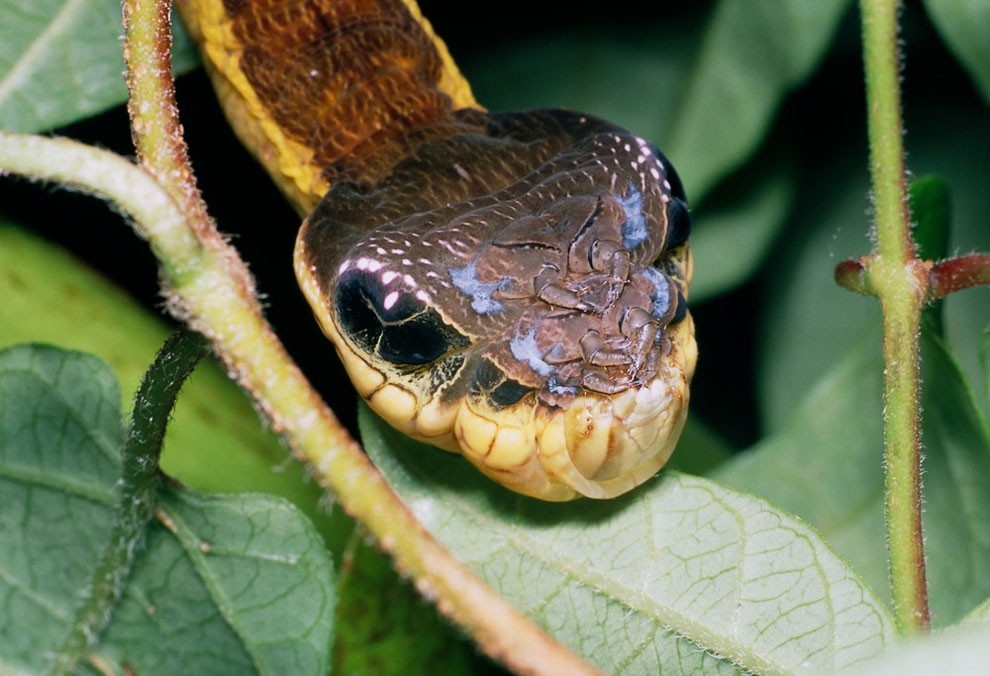 When is a snake not a snake? When it’s a caterpillar! If this hawkmoth caterpillar feels threatened, it immediately takes on snake-like characteristics and behaviour. Pulling in its legs and head, the caterpillar adopts a slithering motion. The caterpillar then inflates the head-end of its body to create a realistic-looking snake’s head. The body is large by caterpillar standards and covered in scales, ensuring this species is one convincing masquerader. (Photo by Science Photo Library)

National Geographic Traveler Photo Contest 2014 Is Underway
Shark Island in Central Indonesia
This New Zealand Street Is So Steep It Makes The Houses Look Like They're Sinking
The Lost Tribes Of Tierra Del Fuego: Rare And Haunting Photos Of Selk'nam People Posing With Their Traditional Body-Painting
The Earth From Space Through The Eyes Of French Astronaut Thomas Pesquet
Guy Finds Abandoned Graveyard Of Supercars In UAE
North Carolina's Abandoned 'Wizard of Oz' Theme Park Will Haunt You
Young Garbage Pickers in India
Halloween-Obsessed Couple Build 'Doll Asylum' By Filling Home With Mutilated Toys
Japanese Photographer Has Created Amazing Panoramic Images Of The World's Largest Salt Flat In Bolivia
Bizarre Photographs of Thailand’s Buddhist Hell Garden
Holi - Traditional Festival of Colours in India
Wide Seats And Plenty Of Legroom: These Old Pan Am Photos Show How Much Airline Travel Has Changed
Glass Beach: Where Nature Has Turned Pollution Into Beauty
Father And Son Convert Old School Bus Into Mobile Tiny Home For Cross-Country Road Trip
Rescue 'Fortress' In Tanzania Protects Albinos From Human Hunters
"Big In Japan": 30 Times People Traveled To Japan And Realized They’re Too Tall For It
Seoul’s Poop Café Offers Sweet Treats
As the World Plunges Into the Flames of The Pandemic, Thousands of People at The Halloween Parade in Wuhan
Beyound The Postmodern Kitch: World’s First Gold-Plated Hotel Opened In Vietnam
Surreal Abandoned Building From Kamchatka
This Man Spent 25 Years To Create The ”World Map” On The Banks Of Lake Klejtrup, Denmark
La Maison Du Gouffre - Tiny Old House Between The Rocks
Is This Terrifying Swing Over a Hawaiian Valley Your Worst Nightmare?
strange