The town of Pripyat, in Ukraine, sprang up just three kilometres from the ill-fated Chernobyl power plant. But on April 26 1986, one of the reactors deep within the plant exploded, causing the world’s worst nuclear disaster. 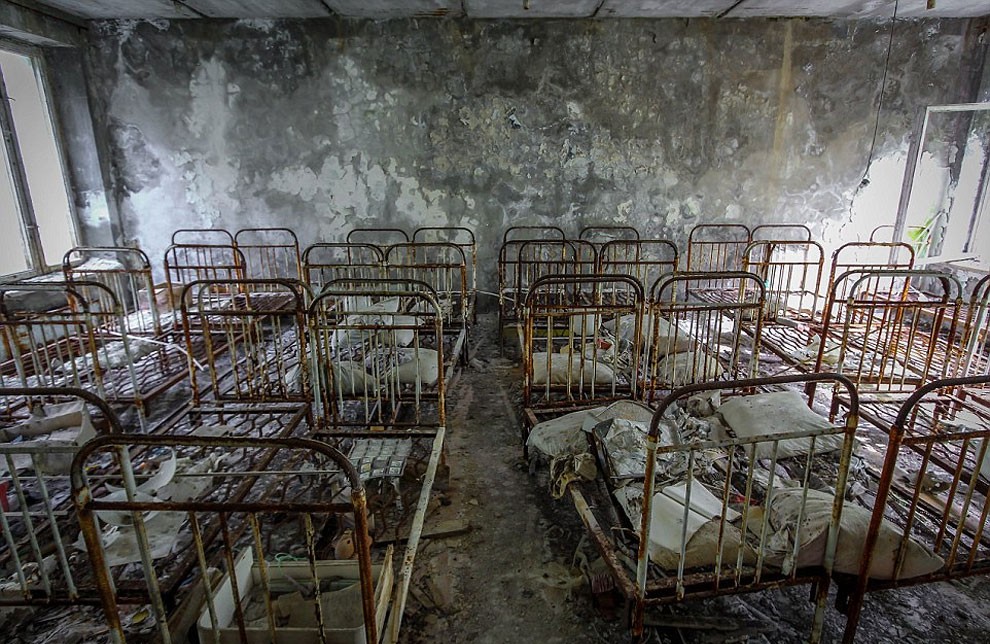 Photographer Roland Verant, 35, from Vienna, captured a series of stunning images of the Ukrainian town of Pripyat, 30 years after the Chernobyl nuclear disaster that decimated the town. 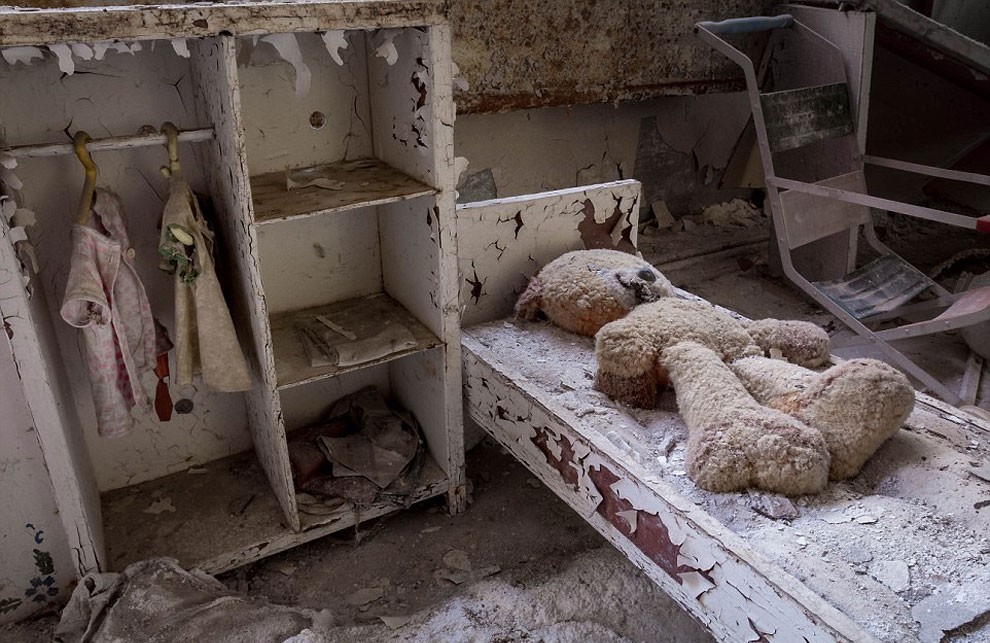 The once-bustling town of Pripyat sprang up just three kilometres from Ukraine’s first nuclear power plant, which exploded on April 26 1986. 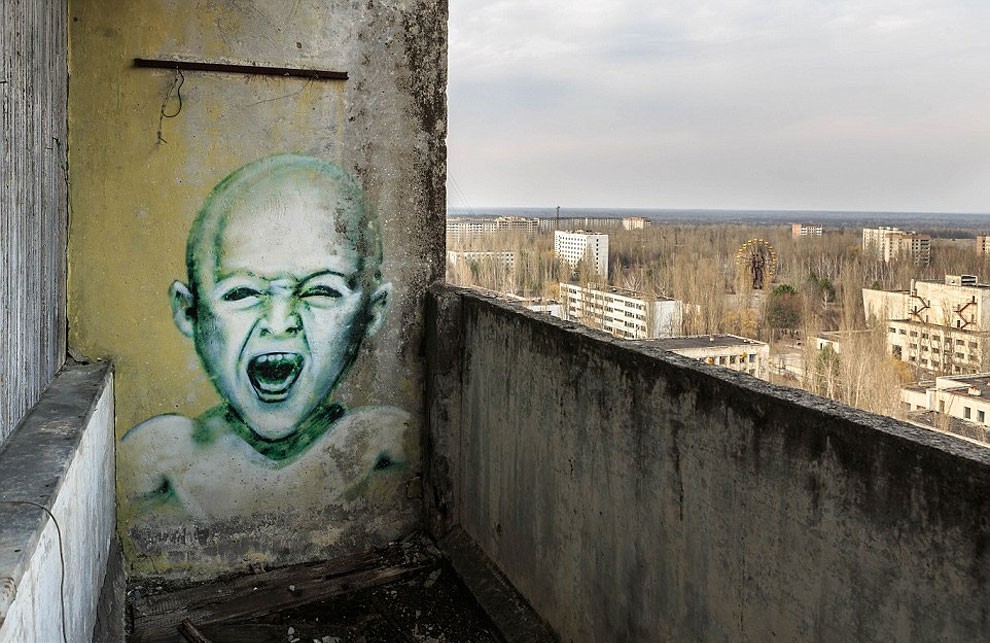 Pripyat is still a no-go zone because of the high levels of radiation, but graffiti artists have broken the rules and used the abandoned town as a blank canvas. 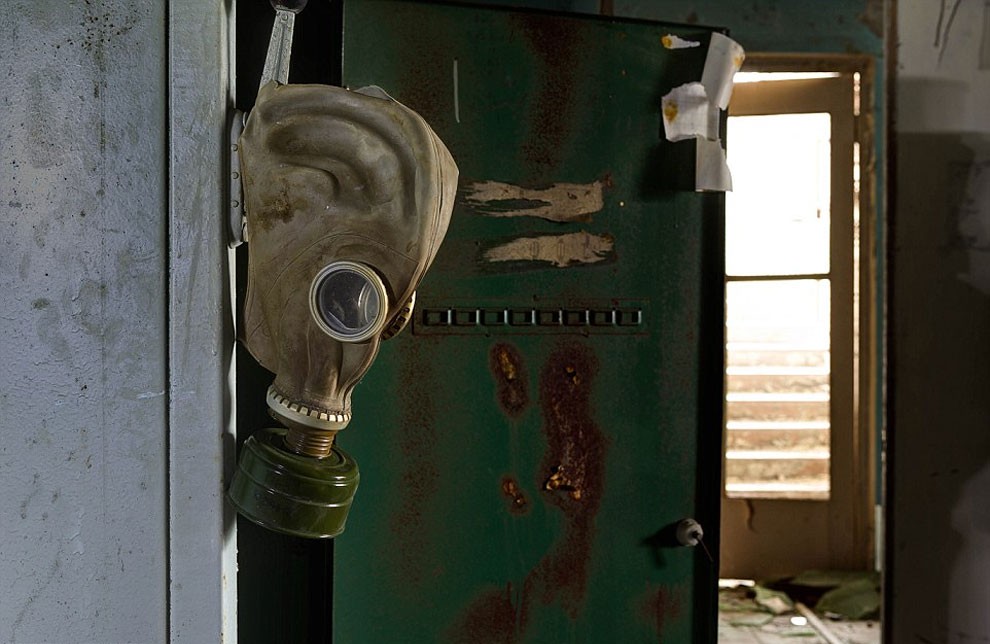 It wasn’t until the next day that the government realised the extent of the disaster, and ordered the evacuation of the town’s 50,000 residents. 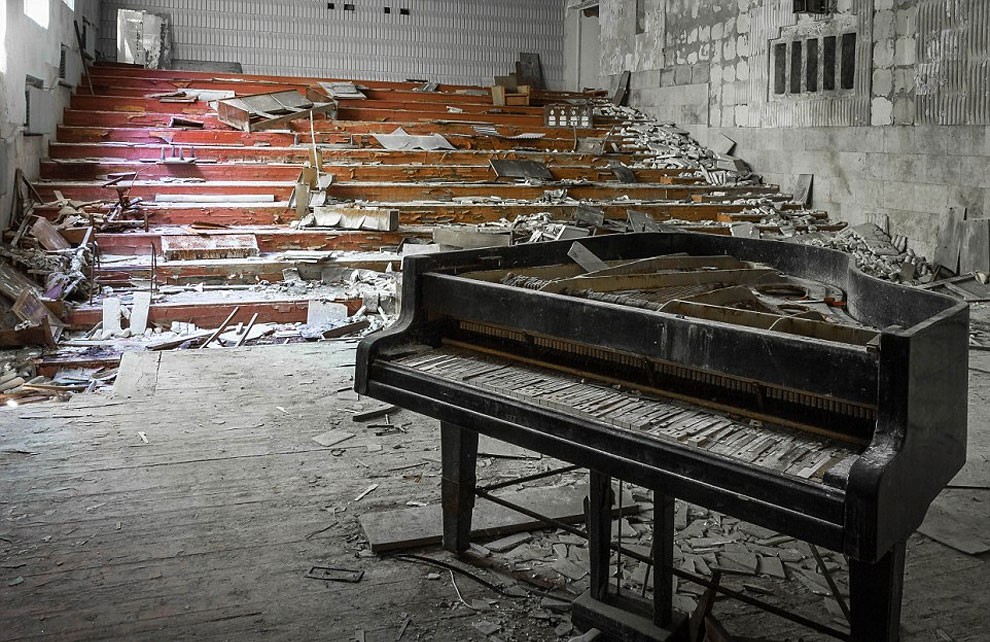 The scientists, workers and military personnel that staffed the power plant upped and left, taking their families with them, but leaving behind almost all their possessions. 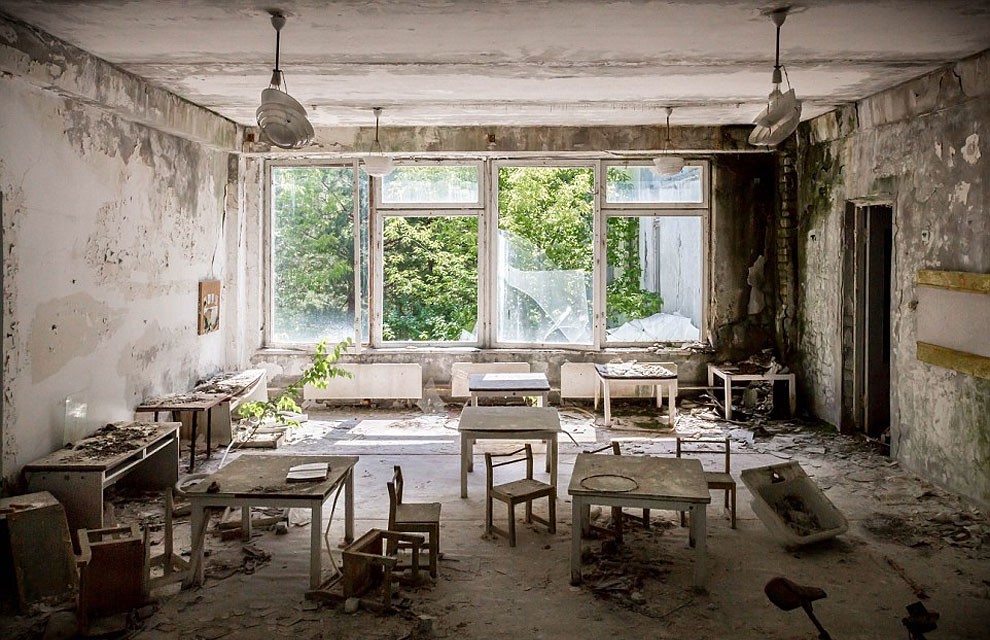 Most had no idea they would never return to the town that they had once called home, before the world’s worst nuclear disaster struck. 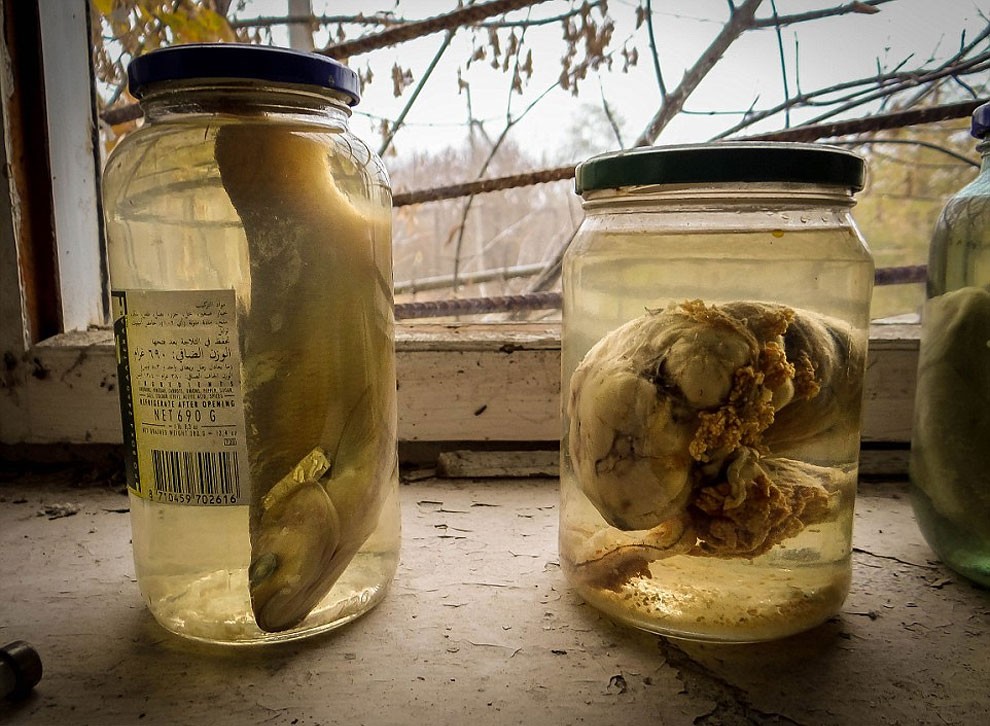 The series of photographs reveal what Pripyat has now become, nearly 30 years after the disaster that forced the evacuation of 50,000 residents. 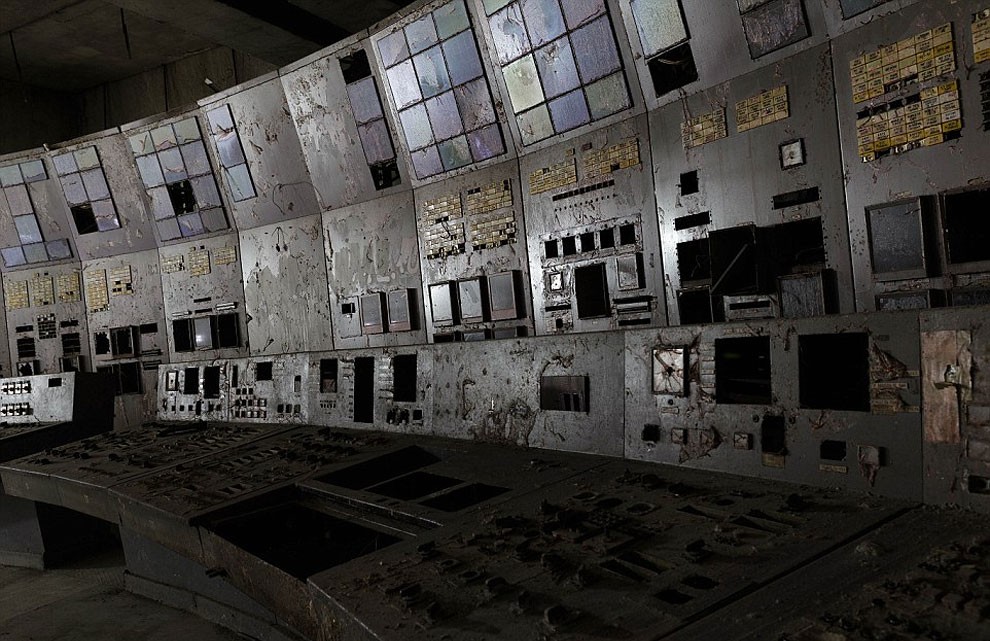 Chernobyl was Soviet Ukraine’s first nuclear power plant, but on April 26 1986, a reactor deep inside the plant went into meltdown. 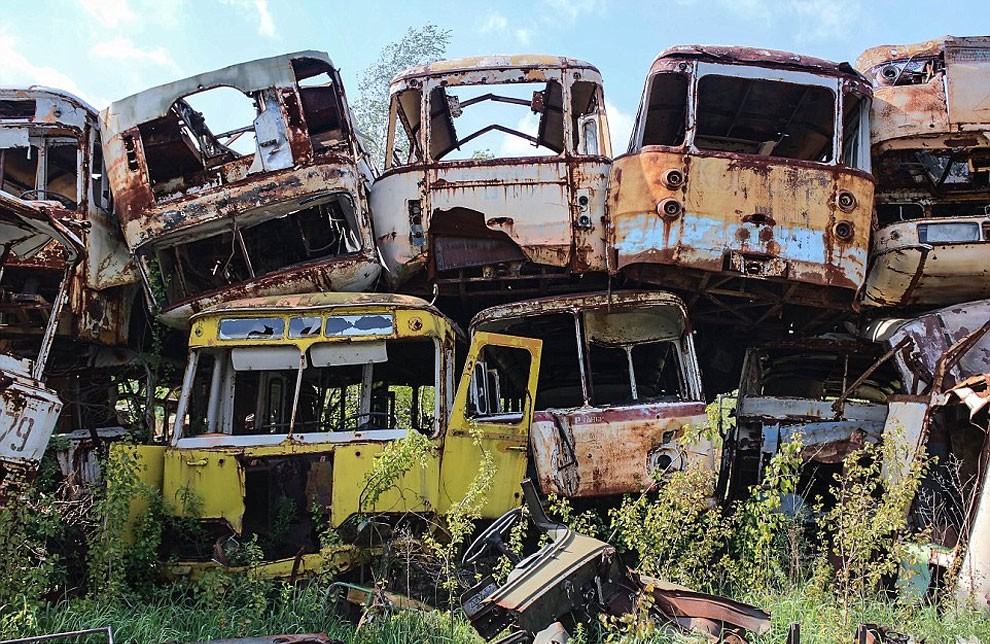 Nature has reclaimed the once-thriving city, that was hailed as a vision of the future with progressive town-planning and modern architecture. 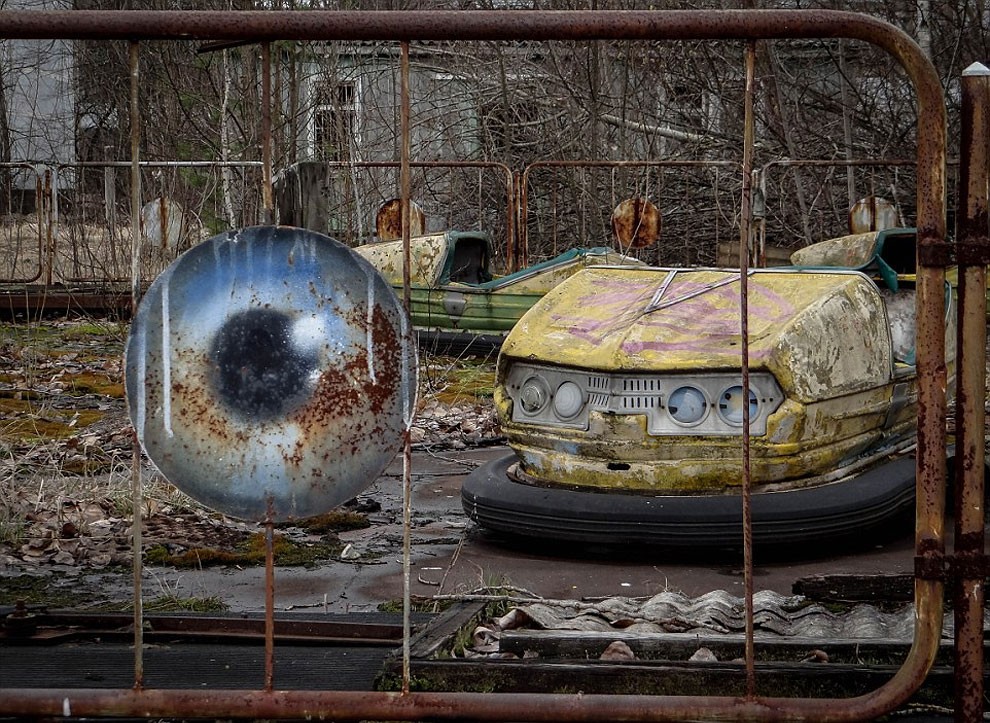 The town was even home to a fairground, complete with bumper cars and a Ferris wheel to entertain the families of the workers. 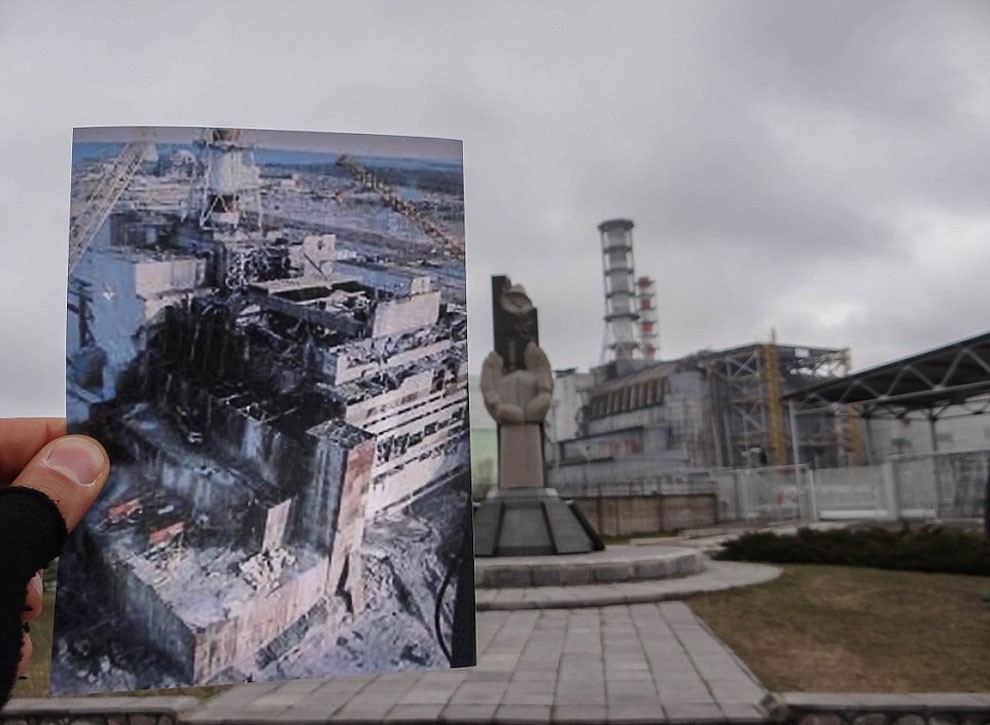 Photographer Roland Verant, from Vienna, holds up a photograph of the power plant after the explosion on April 26 1986 against a backdrop of the plant as it stands today. 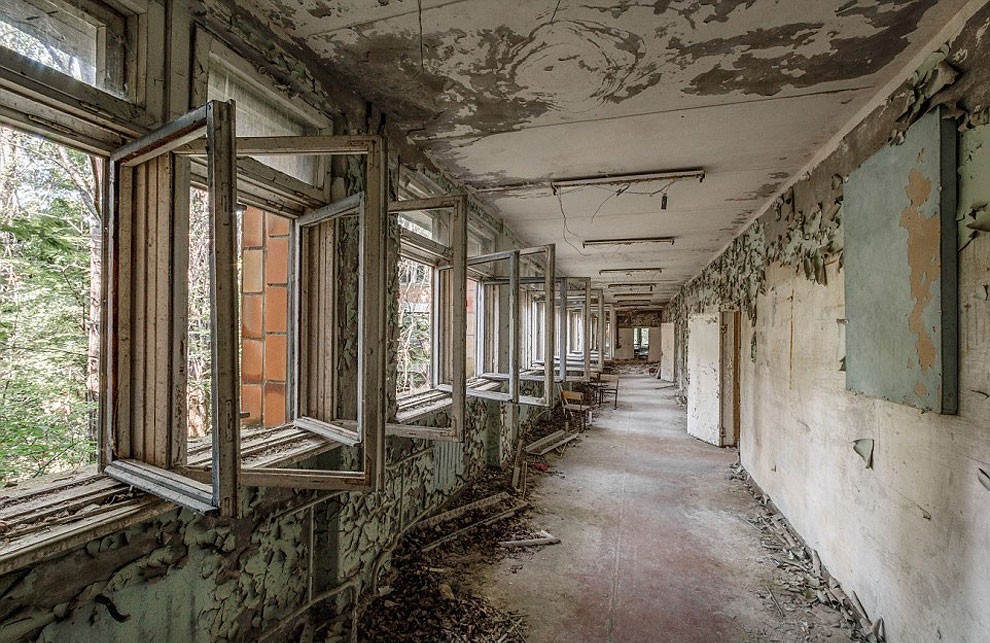 Buildings today still stand as they were left during the emergency evacuation, with paint peelings and glass long gone from the windows. 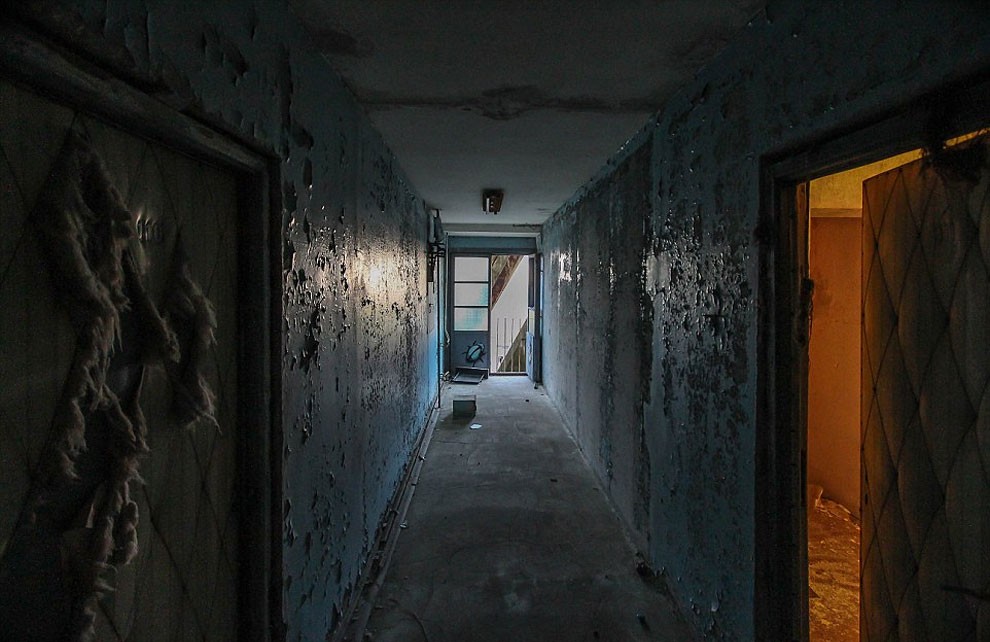 Families were forced to abandon their homes during the government evacuation, which lasted just three hours, on the day following the explosion. 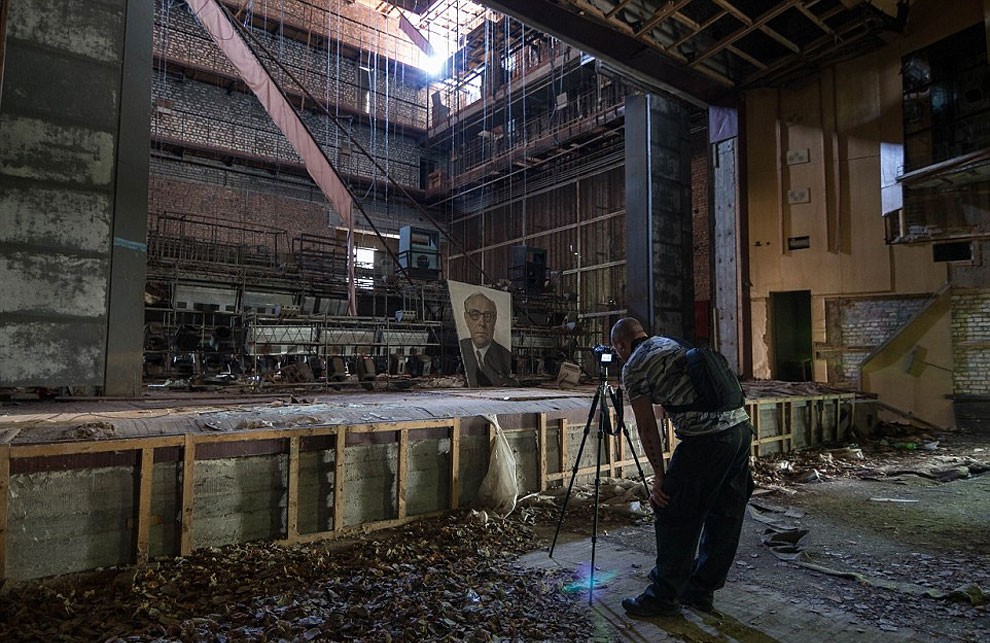 Photographer Roland Verant (pictured), from Vienna, managed to gain access to the no-go site, accompanied by a trained guide. 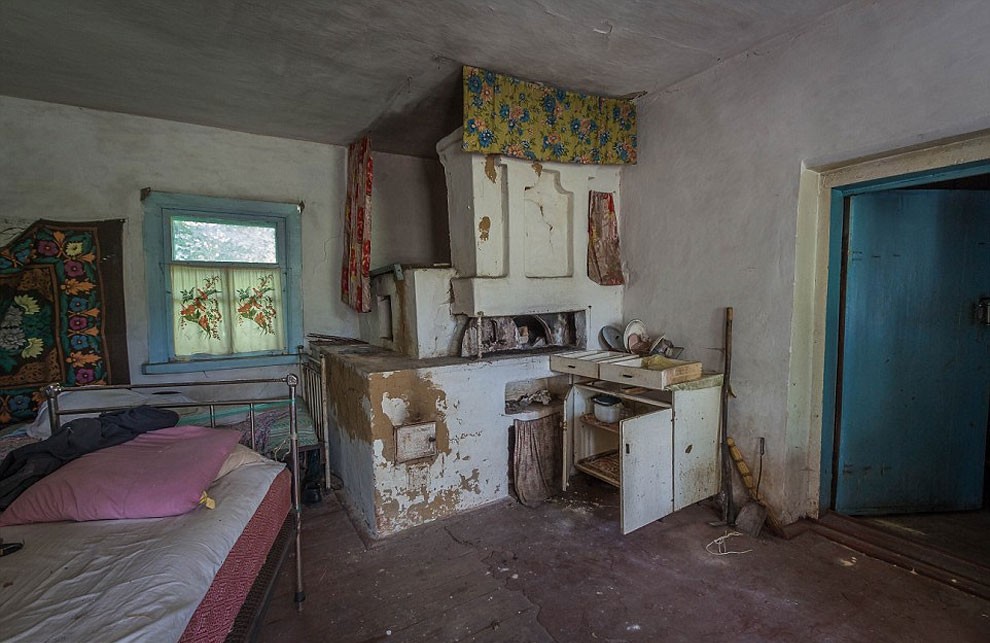 Families were forced to leave nearly all of their possessions behind when the town was evacuated. Today, houses still stand with food in the cupboards and sheets on the unmade beds. 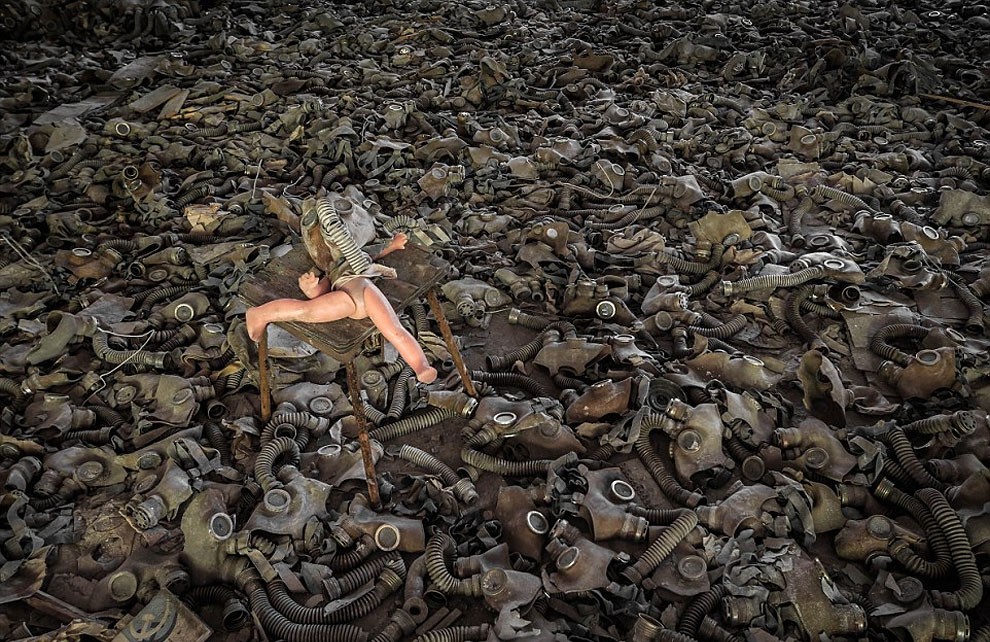 Masks litter the floor of the factory in the ghost town that Pripyat has become since the disaster, nearly 30 years ago. 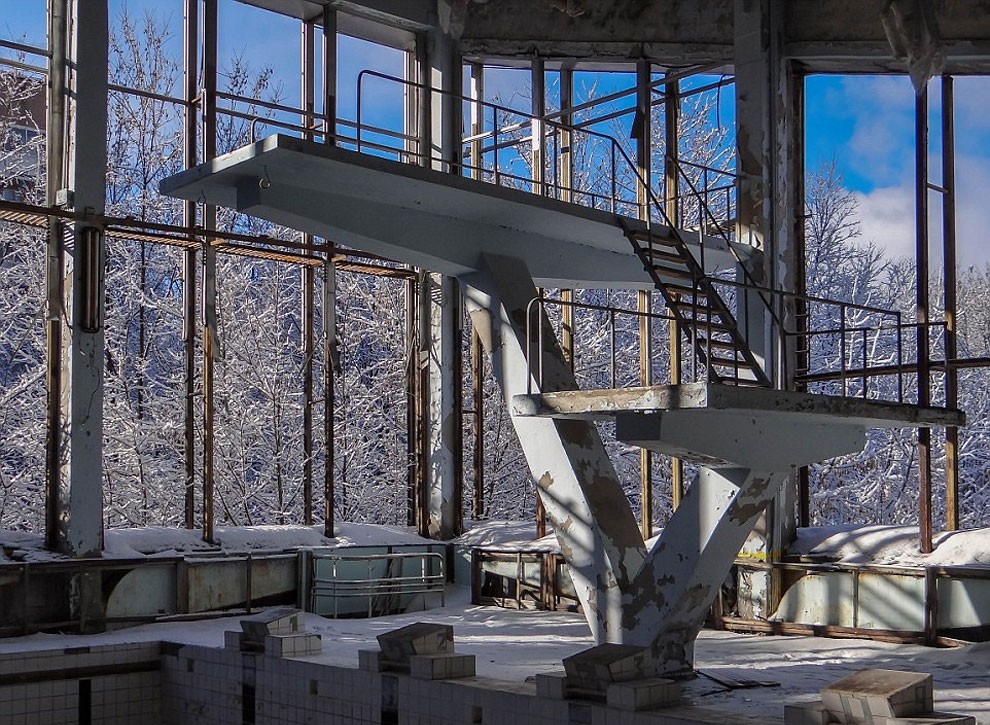 An abandoned swimming pool remains, with layers of dust over the diving board and pool where workers and their families once played. 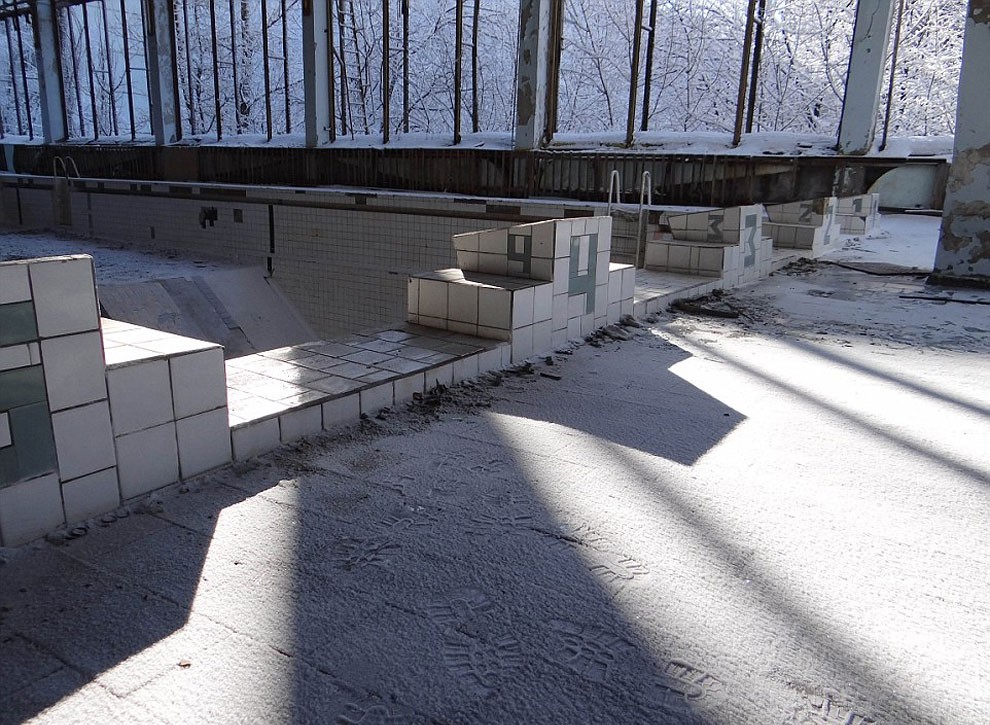 Footprints in the layers of dust that now cover the town’s swimming pool, evidence that it was once a place that thousands of people called home. 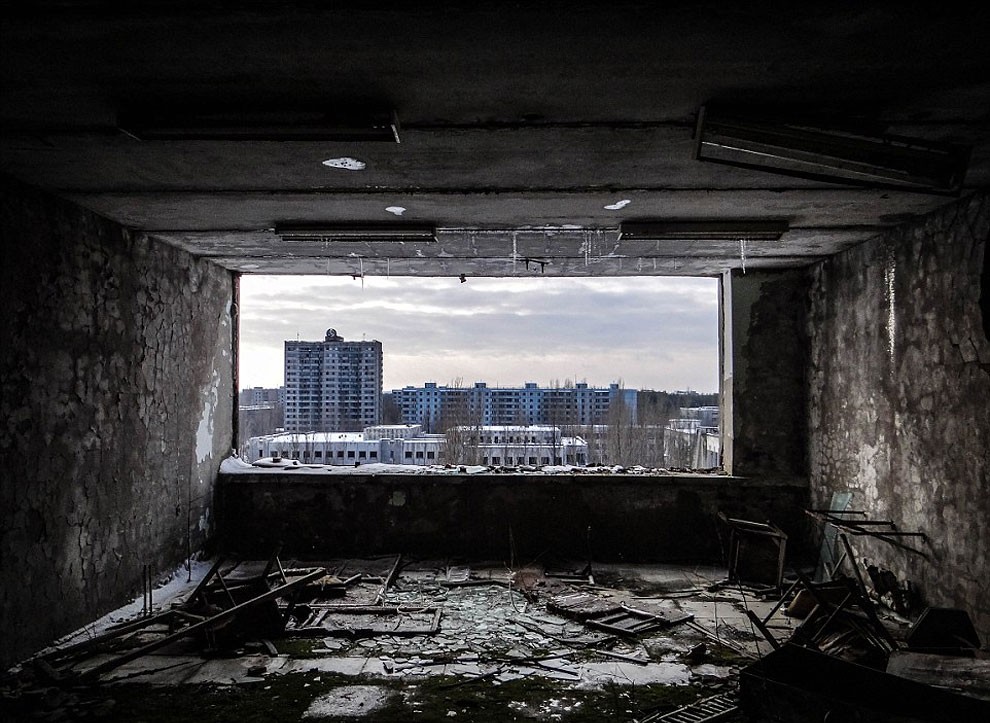 Shattered glass and fragments of furniture litter the floor, with a view looking out over the ghost town that Pripyat has become. 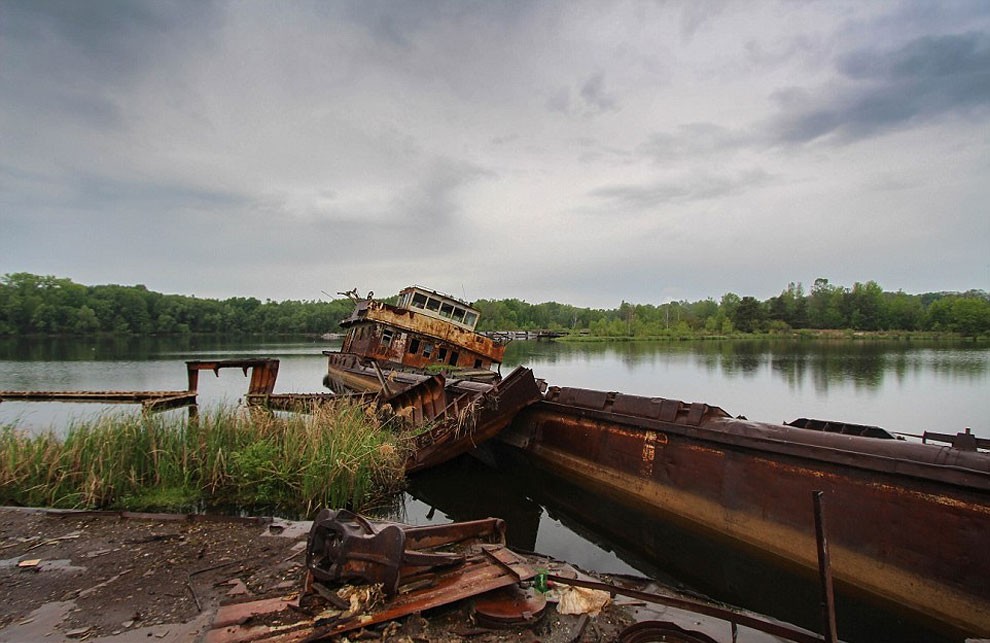 An abandoned boat lies in a lake in the town. Russia, Ukraine and Belarus suffered the worst of the contamination from the blast, but increased radiation levels were detected across Europe. 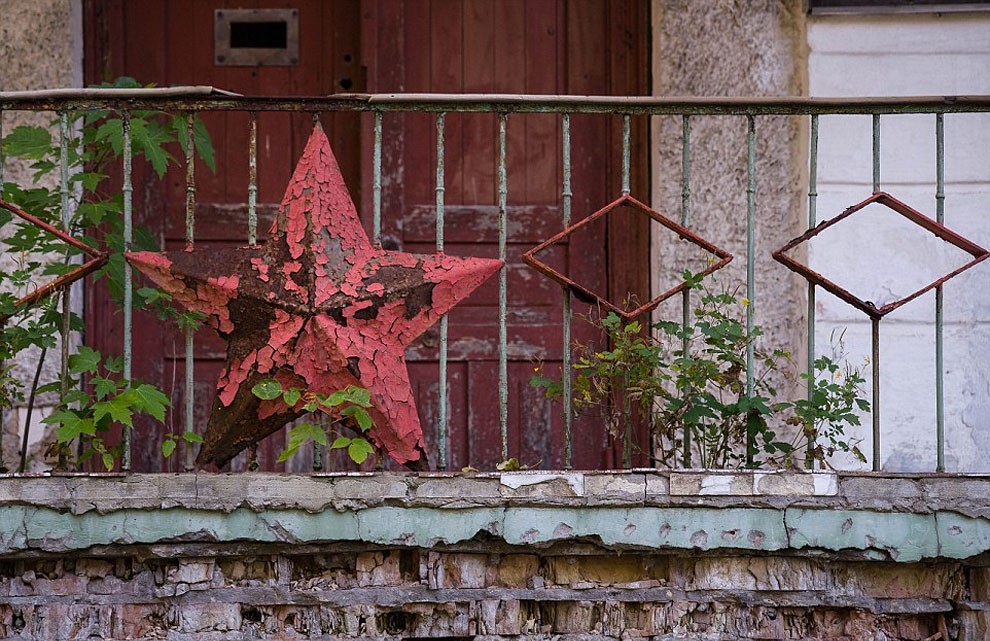 The red paint on a balcony flakes off, as nature reclaims the Pripyat site, where factory workers lived with their families. 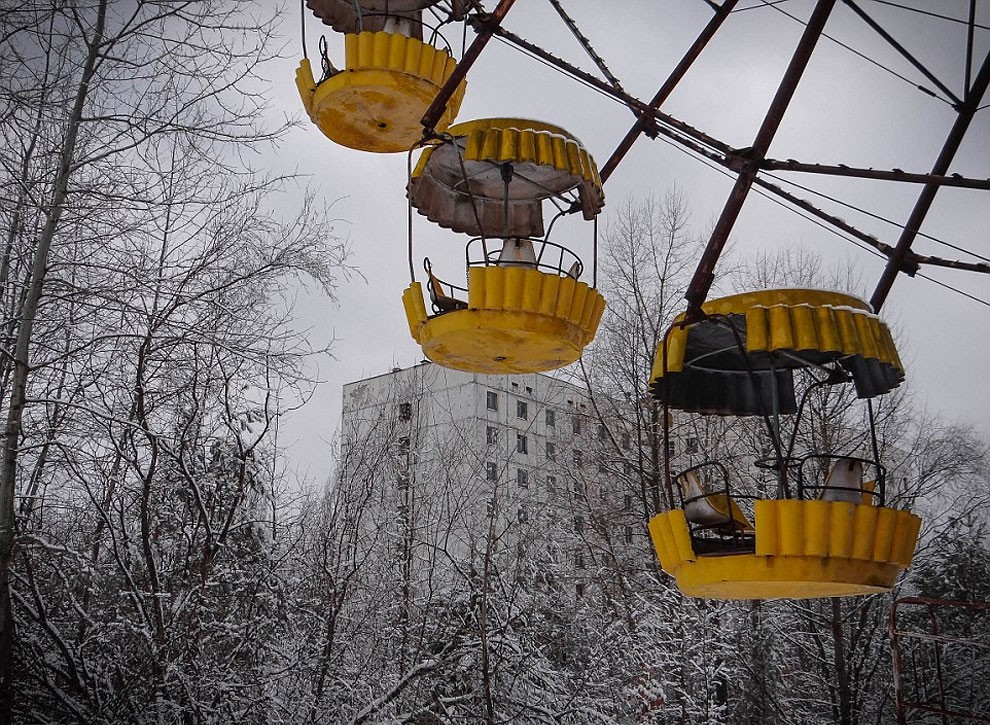 A Ferris wheel had been erected in the town, due to be opened to the public in May. But the explosion put an end to the plans. 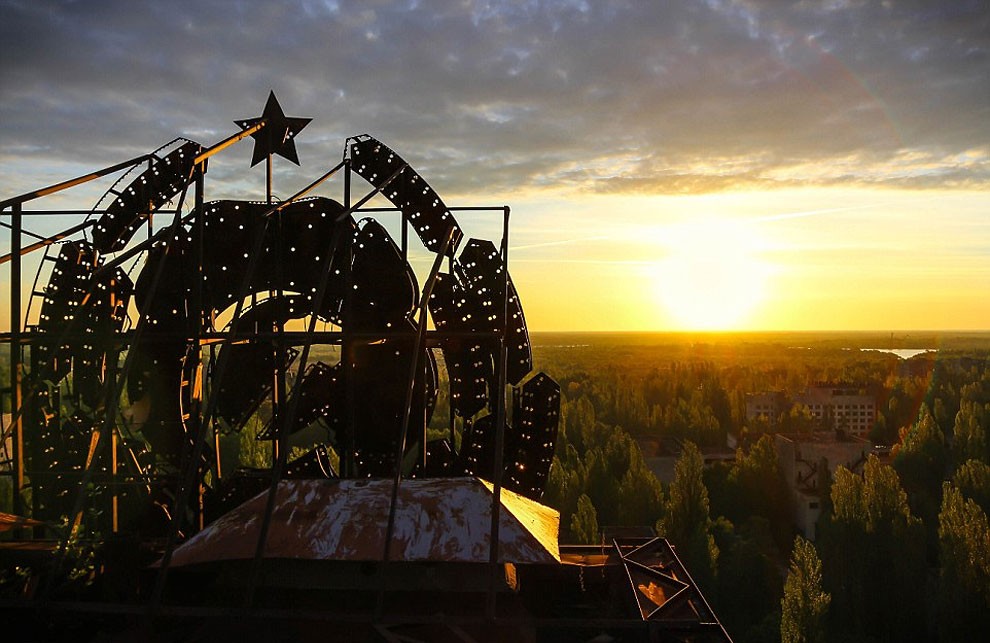 The sun sets over Pripyat, in Ukraine, with the town’s much-anticipated Ferris wheel in the foreground. 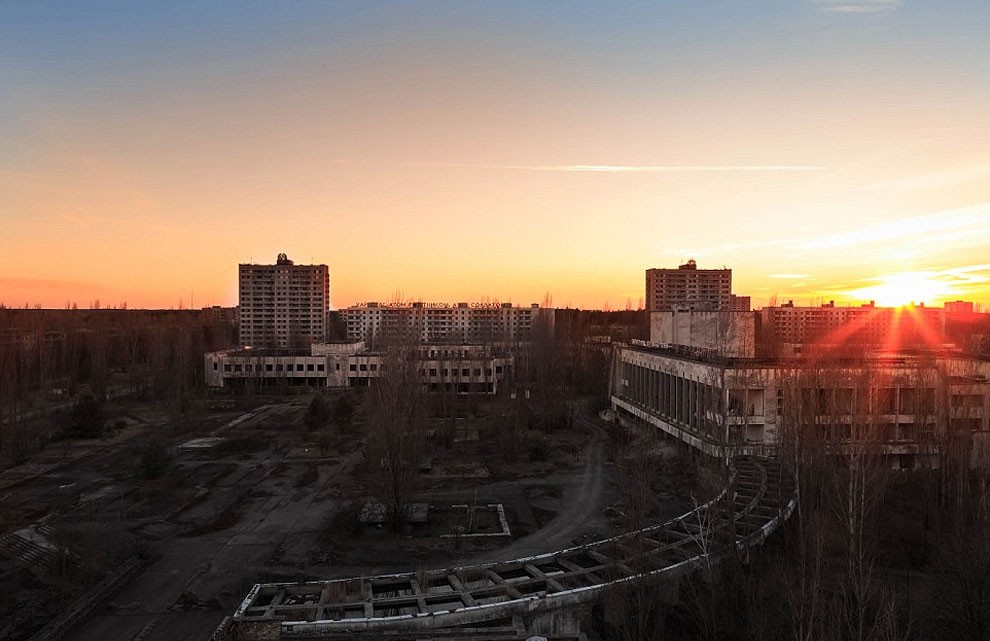 Although the external structures of buildings still stand, the insides are littered with broken glass, fragments of furniture, and the remnants of the lives of people who called Pripyat home. 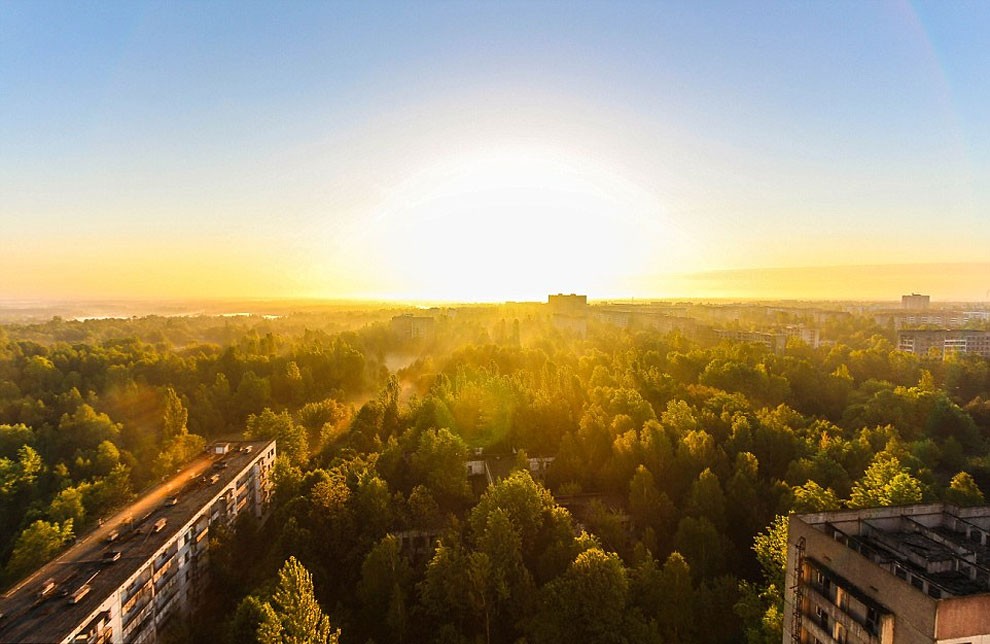 The sun shines over the trees of Pripyat, which has slowly been reclaimed by nature in the 30 years since the catastrophe.

Haunting Photos Of A Deserted Island In Japan
87-Year-Old Collector Gathered 110 Fighter Jets In His Chateau In France
Dive In And Join The Chaos – If You Can Find Any Water Left In These Crowded Swimming Pools
Drainage Canal In Japan Is So Clean They Yven Have Koi In It
Would You Swim In Rio De Janeiro's Polluted Waters?
Man Takes the World’s Most Impressive Selfie. You Gotta See How Far He Climbed.
No Pants Subway Ride 2016
Beautiful New Zealand: Earth’s Mythical Islands
Two Look Books, Two Countries, Two Minds: Akomplice in Brazil Summer Lookbook
Bone Church of Rome: Amazing Vintage Photos Show Inside Rome’s Capuchin Crypt From the Late 19th Century
In An Old Village In Southern Bavaria, A Unique Ancient Pagan Tradition Is Still Alive
Eerie Statues Of American Presidents Forgotten By Time
Old Fire Truck Turned Into Spacious Hotel Room
Inside Japan’s New Luxury Suite Train That Departs From Ueno’s Platform 13½
The Swasthani Brata Katha Festival in Nepal
Stewardess Skill Training In China
A Real-Life Yellow Submarine for Rent
The Island In A Lake On An Island In A Lake On An Island
Color Run in Brussels
The City that Builts into the Rock
World’s Eco-Friendliest Country, Bhutan, Celebrates Birth Of New Prince By Planting 108,000 trees
This Woman Captures Charming Photos Of Her Lovely Giant Teddy Bear
The 37th International Hot Air Balloon Week in Switzerland
This Guy Bought A Giant Plastic Godzilla, And Now They Travel Everywhere Together
This Restaurant In Bangkok Uses Cartoon Dragon Dolls As Space Keepers For Social Distancing
Inuits from Remote Russia Get Used to being Photographed for the Very First Time
Amazing Treehotels in Sweden
Elephant Festival in Nepal
Winter Has Come
Inside North Korea: Silk Mill Workers
after, apocalypse, chernobyl, inside, nuclear, years