The Mercury, Gemini and the Apollo Missions of the late 1950s and 60s still remain one of NASA’s greatest achievements — one that enabled humans, for the first time in history, to leave the surface of the Earth for another heavenly body. This monumental task was made possible through the hard work and genius of thousands of engineers, and the incredible infrastructure they built along the coast of Florida. With the advent of reusable rockets, private space programs and a change in NASA’s goals, unfortunately, many of these facilities were abandoned and left to the elements. American photographer Roland Miller has spent 25 years documenting these buildings in his photographs before they rot and crumble to the ground. Indeed, Miller estimates that about half of the locales he shot have already disappeared since he started shooting. 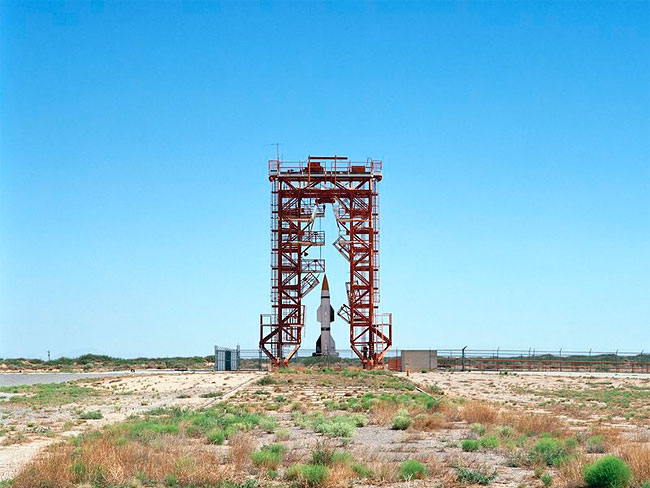 V2 Launch Site with Hermes A-1 Rocket, Launch Complex 33 Gantry, White Sands Missile Range, NM, 2006. “One of the earliest launch complexes built. Used to test launch captured German V2 rockets. Many of the features in LC 33’s blockhouse made there way into other blockhouses at Cape Canaveral–like multiple panes of glass laminated together to allow for protected viewing of the launch from the blockhouse.

The project began in 1988 when Miller, a photography instructor at Brevard Community College, was contacted by an environmental engineer at Cape Canaveral Air Force Station who needed help disposing of old photographic chemicals at the facility. Hoping to snag the free stuff from the photo lab, Miller visited Launch Complex 19 of Gemini Program, and was immediately awestruck by the way it was slowly rusting away. Miller has been obsessed with space for as long as he could remember. His own dreams of becoming an astronaut were dashed to the ground by his but poor eyesight. Seeing the deteriorating buildings, Miller resolved photograph them while there was still time.

It took two years of haggling with NASA officials before he was finally allowed permission to visit the ruins. Since then he has visited 16 space launch sites, research facilities, and museums, in Virginia, Florida, Alabama, Mississippi, Louisiana, Texas, Kansas, Utah, New Mexico, and California. Miler has now successfully raised over $25,000 through Kickstarter to publish a photography book titled “Abandoned in Place” which is scheduled to be published in January of 2016. 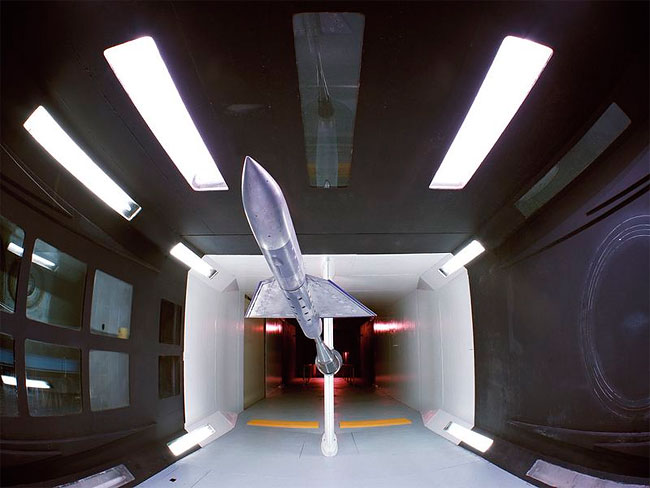 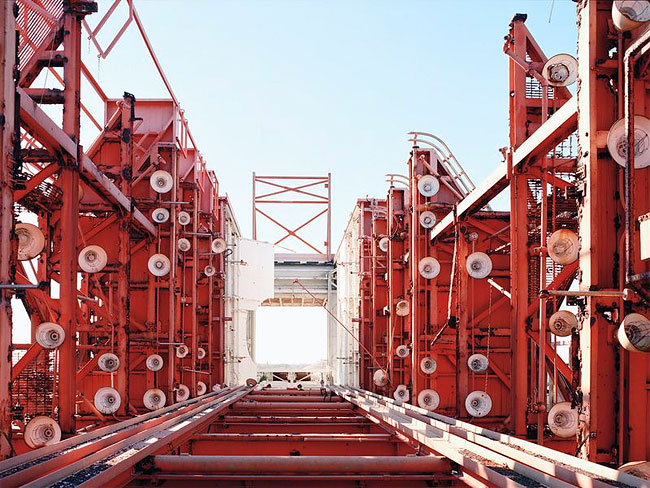 “This was the first abandoned launch pad I visited. It was 1988. I was amazed that the light bulbs were mostly intact 22 years after the last Gemini mission. The erector at Pad 19 was hinged at the base, and lowered before every launch. After the final launch, it was left horizontal.” 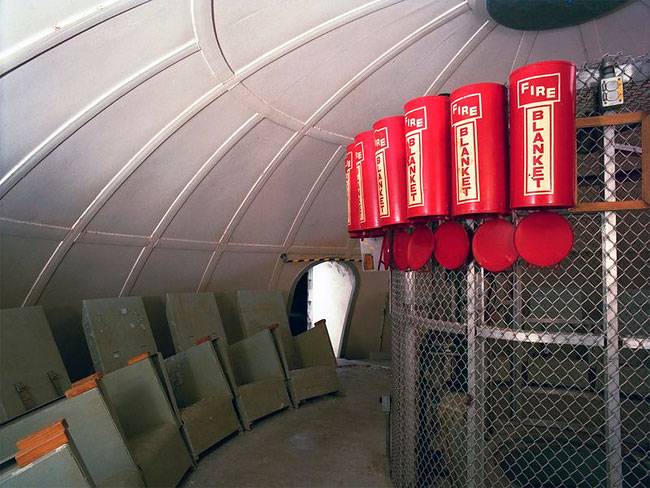 “Adjoining the Rubber Room was a Shelter Dome room with the floor set on springs to isolate the occupants from whatever conflagration may be occurring above them as they seek shelter.” 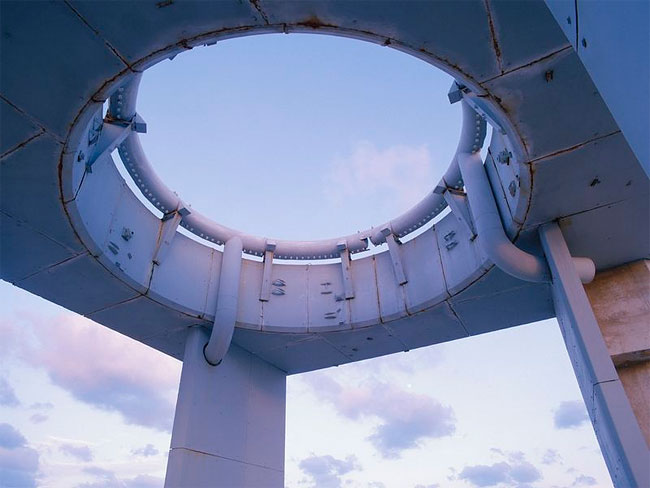 “In 1998, the launch ring at Complex 34 was sandblasted and painted to protect it from weathering. I had been trying for years to capture the spiritual quality of this site. I made this photograph near sunset with the blue sky reflecting on the launch pedestal and the last pink rays of sunlight illuminating the ring and clouds behind.” 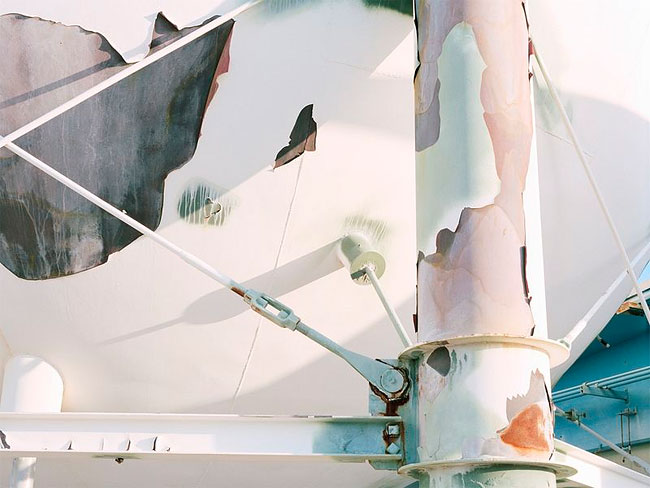 “There were two of these fuel pressure spheres near the entrance to Launch Complex 37. One has been repurposed and is now used to support Delta IV rocket launches. The other sphere was removed.” 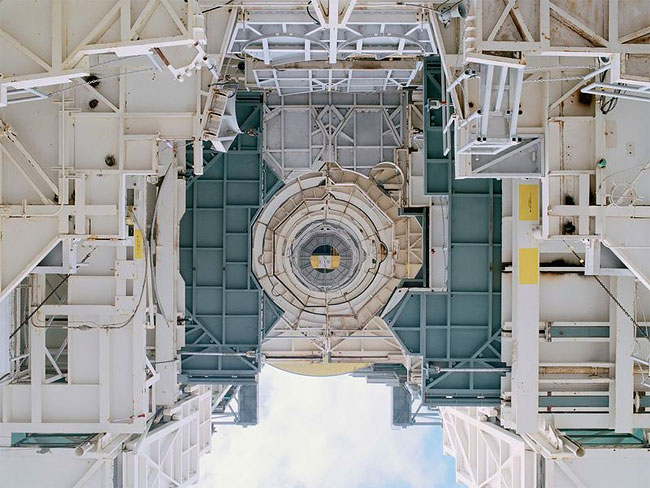 “I photographed Atlas Launch Complex 36B while it was being decommissioned. The mobile service towers of Pads A and B were imploded in 2007. Launch Complex 36 on Cape Canaveral Air Force Station sent Surveyor, Mariner, and Pioneer missions on their way to explore the Moon and the planets of our solar system.” 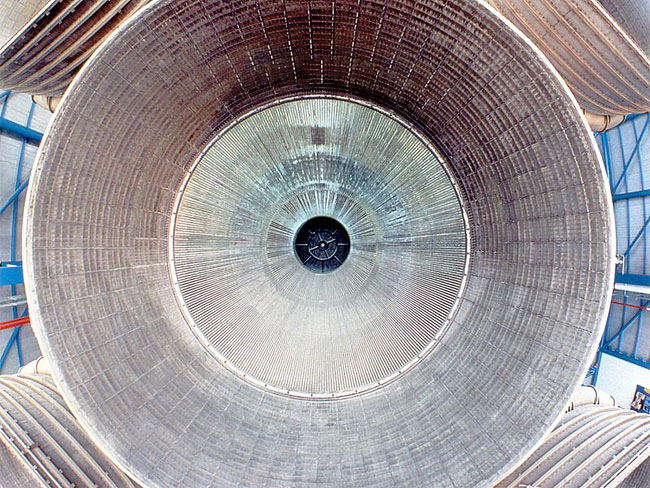 “I was asked, in 1997, to photograph the newly opened Saturn V Center, including access to a high-lift for vantage points like this view of the center Saturn V F1 engine.” 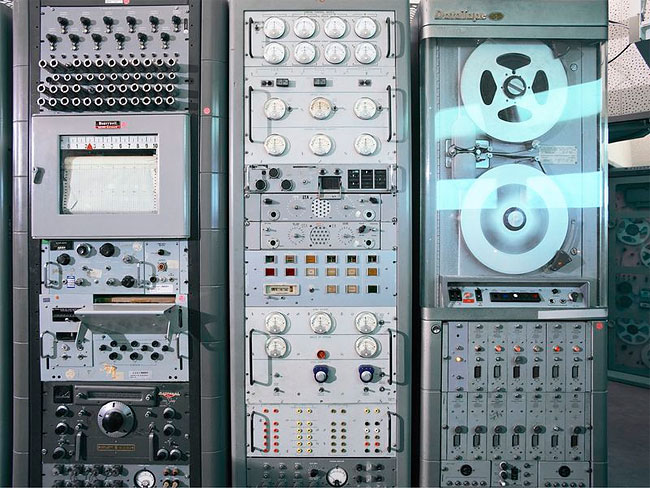 “A stop on one of the Kennedy Space Center bus tours. The blockhouse is often staffed by retired NASA employees who actually worked in the blockhouse and on the Redstone rocket. They explain the procedures and technology of the day.” 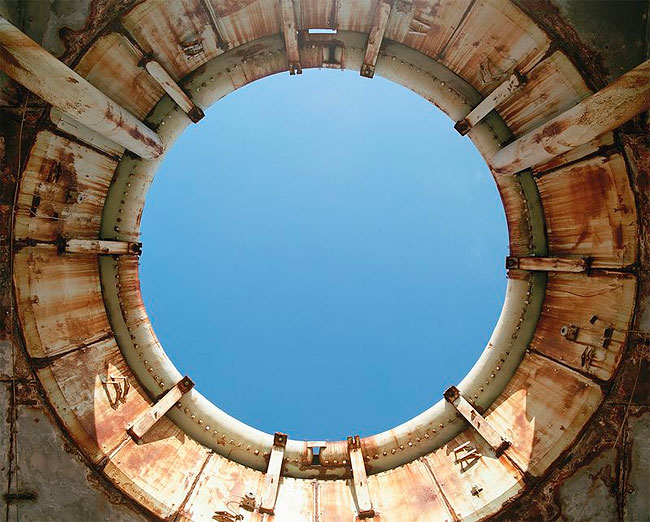 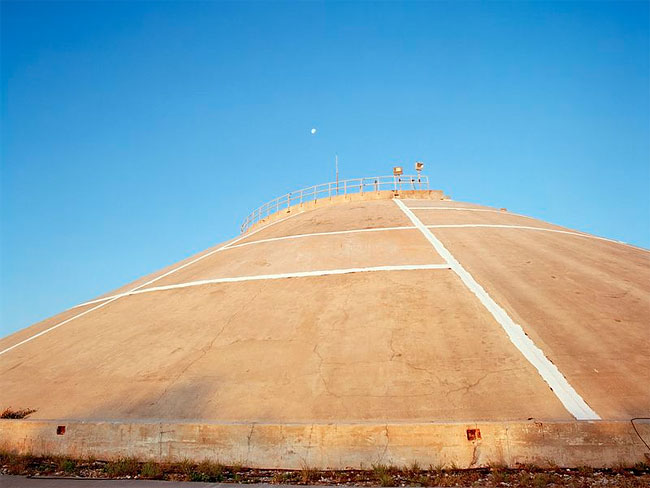 “Many of these abandoned space launch and test facilities bring to mind other archeological sites. This blockhouse reminded me of a pyramid or ziggurat.” 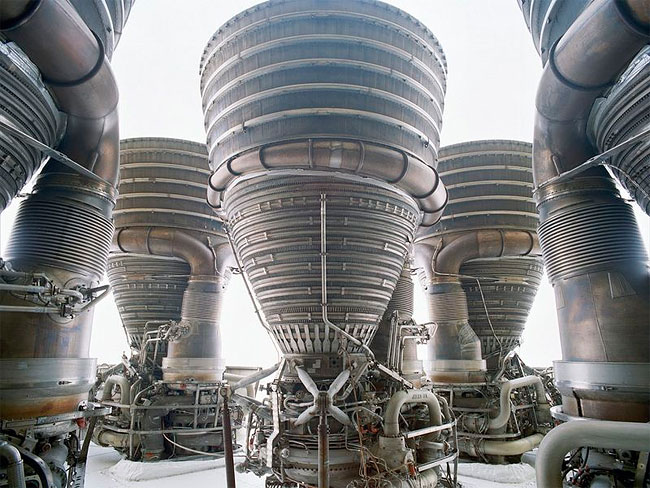 “I made this image laying on my back with my camera on my face in a light rain. I enjoy the visual reference to Nefertiti.” 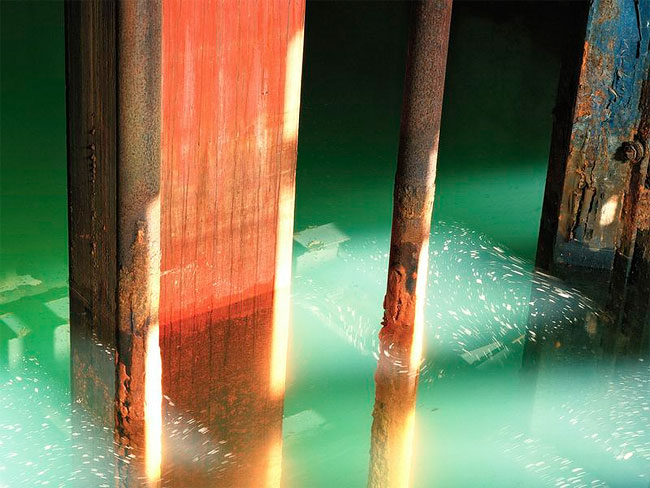 “This is an image of a large square girder in a flooded compartment beneath the launch pad. What I couldn’t have predicted were the swirling reflections of light in the water coming from openings in the roof. They looked like little galaxies.” 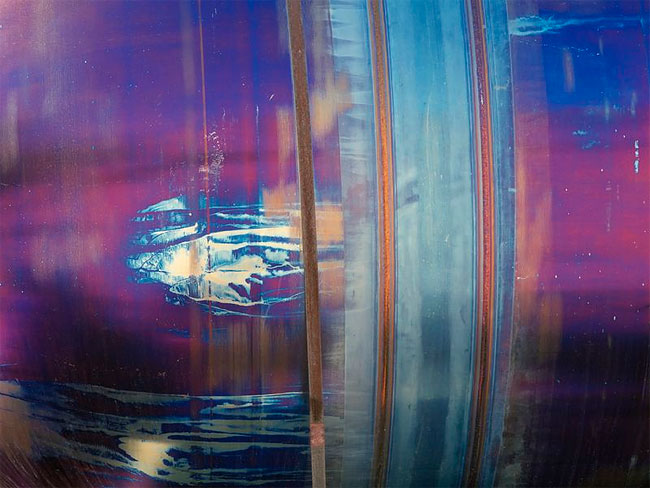 “I photographed this fuel tank while it was in storage, attracted to the amazing colors the oxidation created.” 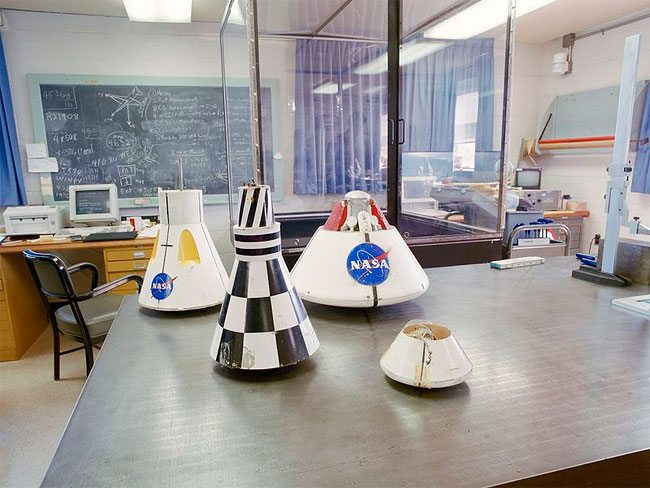 “I asked the staff if I could photograph these models. I was planning on photographing right where they were. When I returned from photographing the Spin Test Tunnel, the staff had set them on the counter showing off the scientific illustrations on the blackboard behind them — a wonderful background.”

Also, don’t miss “A Photographer Found An Abandoned Wooden Model Of Russian Buran Spacecraft” and “Man Noticed This Abandoned Hangar But Whats Inside Caught Him By Surprise“