The White Frontier: Female Photographer Captures Beautiful Images Of Canada’s Most Remote Regions In The 1900s 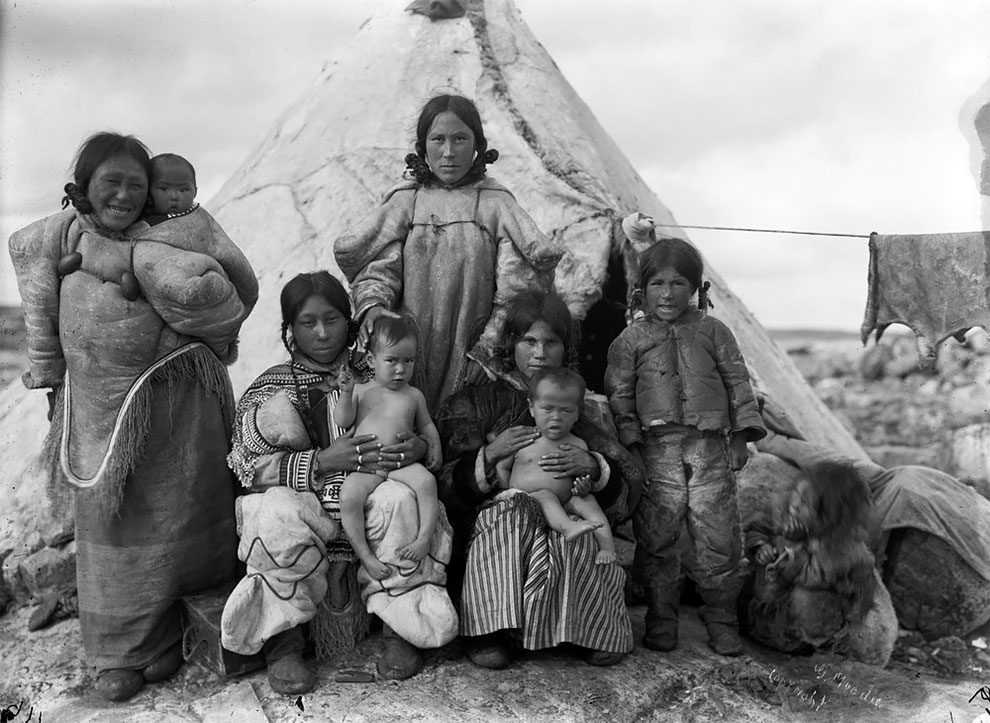 Moodie was born in 1854 in Toronto, and after a move to England she met and married John Douglas Moodie in 1878, and had six children. 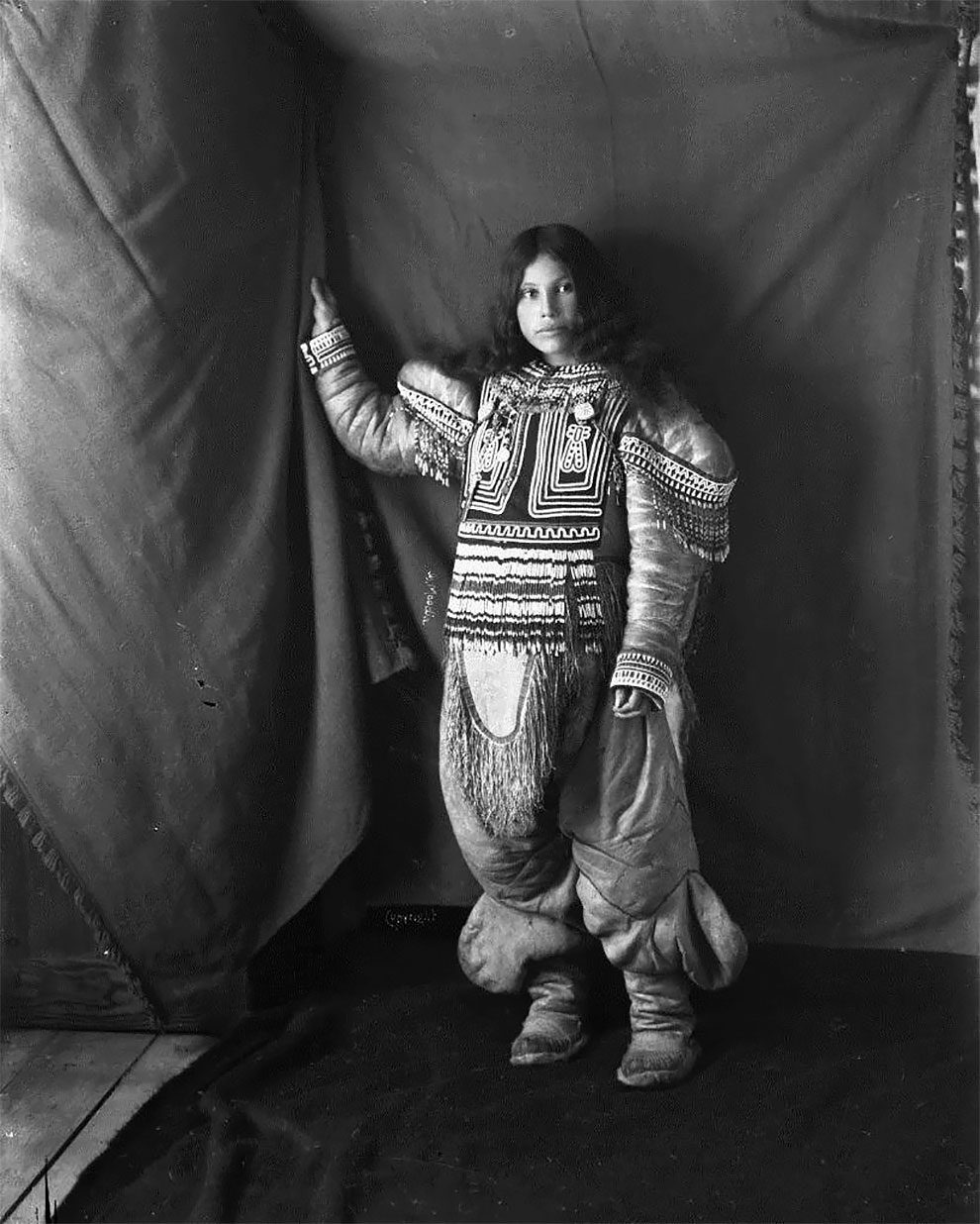 The family returned to Canada to farm in Manitoba, before John began working with the North-West Mounted Police (aka the Mounties). 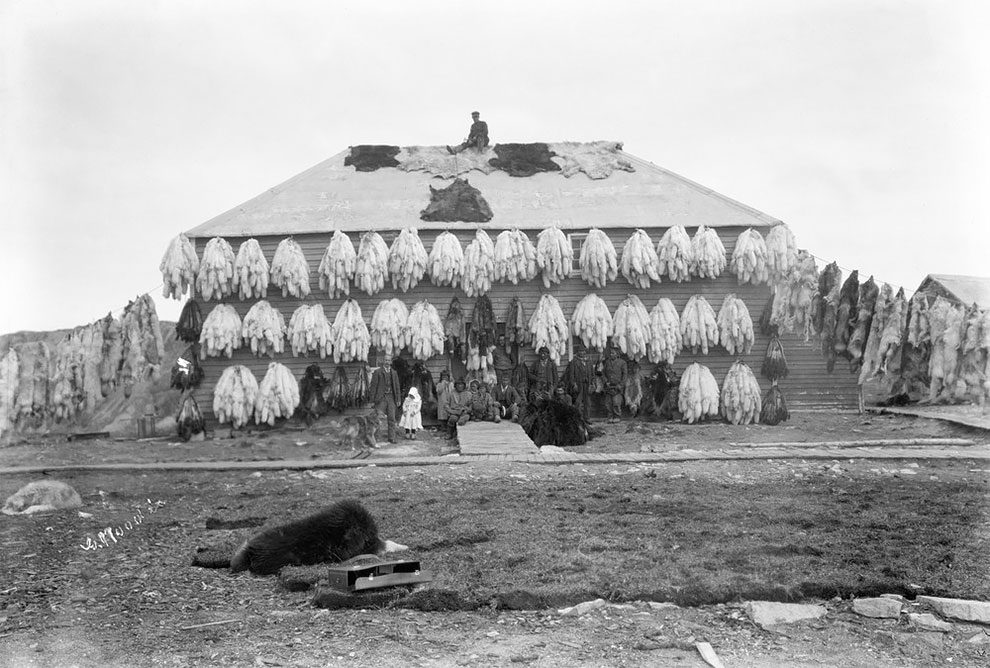 Geraldine accompanied her husband on expeditions to the police’s detachment at the now-deserted Fullerton Harbour in Hudson Bay – an obscure, frozen point in Canada’s far north in what is now Nunavut territory. 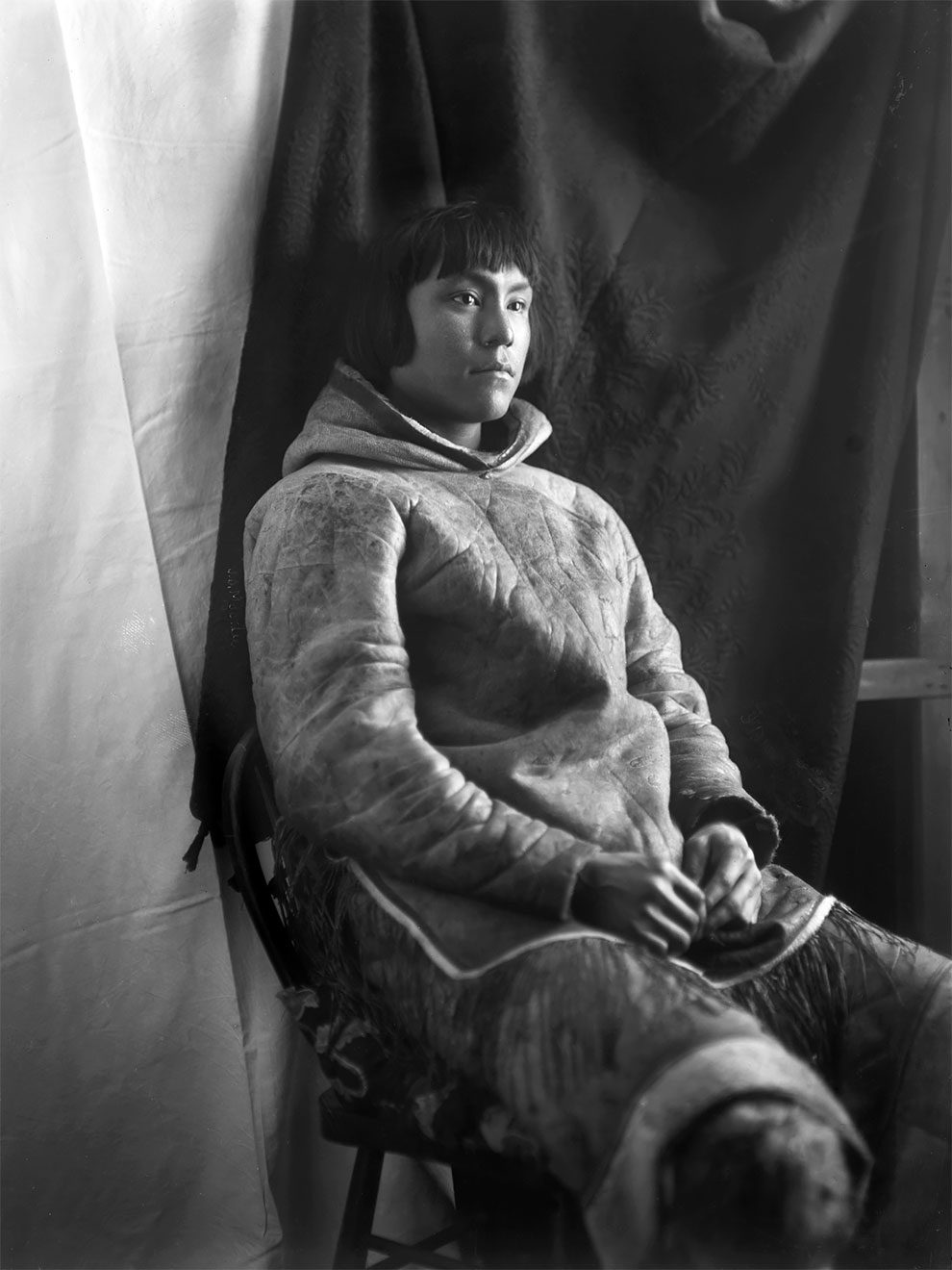 She took portraits of the local Inuit people, while he documented the landscapes he found during his police patrols. 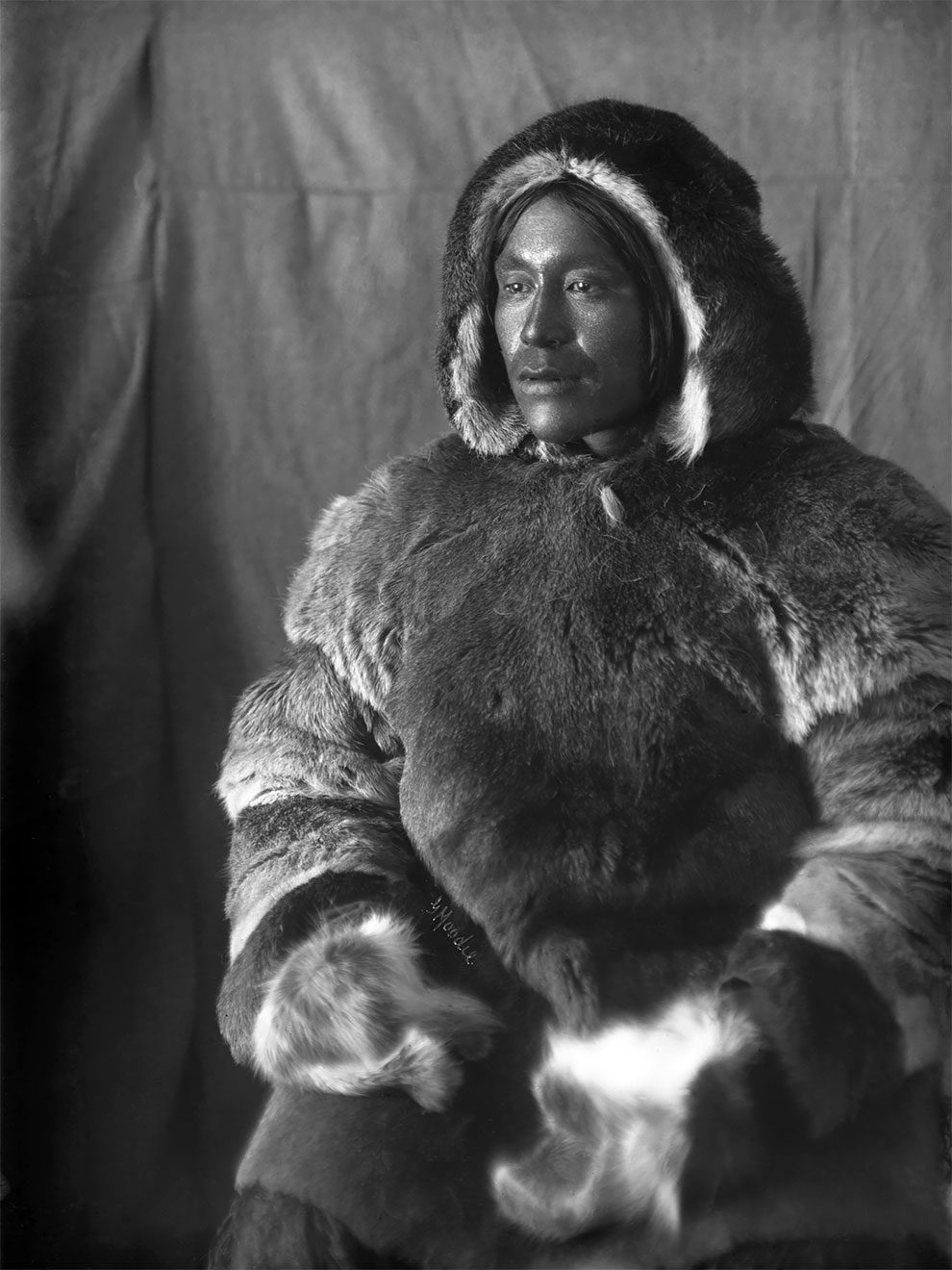 “Words cannot describe this wonderful coast, apparantly (apparently) devoid of everything that goes to make a land attractive, it still has a grandeur and beauty all its own”, she wrote in her diary. 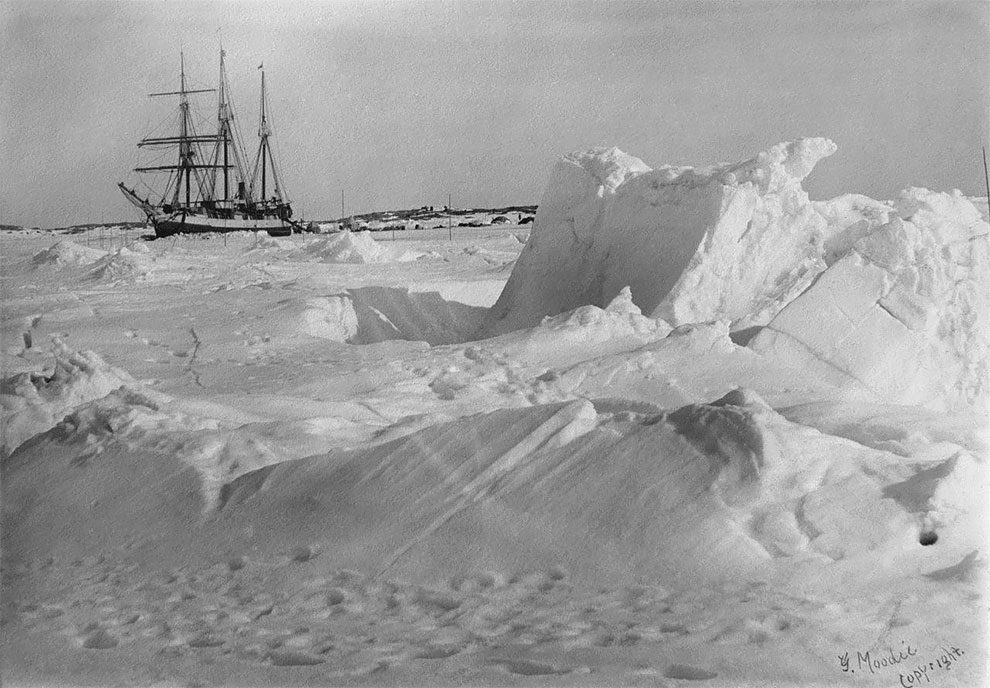 She wrote of the Inuit: “They are very bright and intelligent, her eyes were taking stock of everything all the time”. 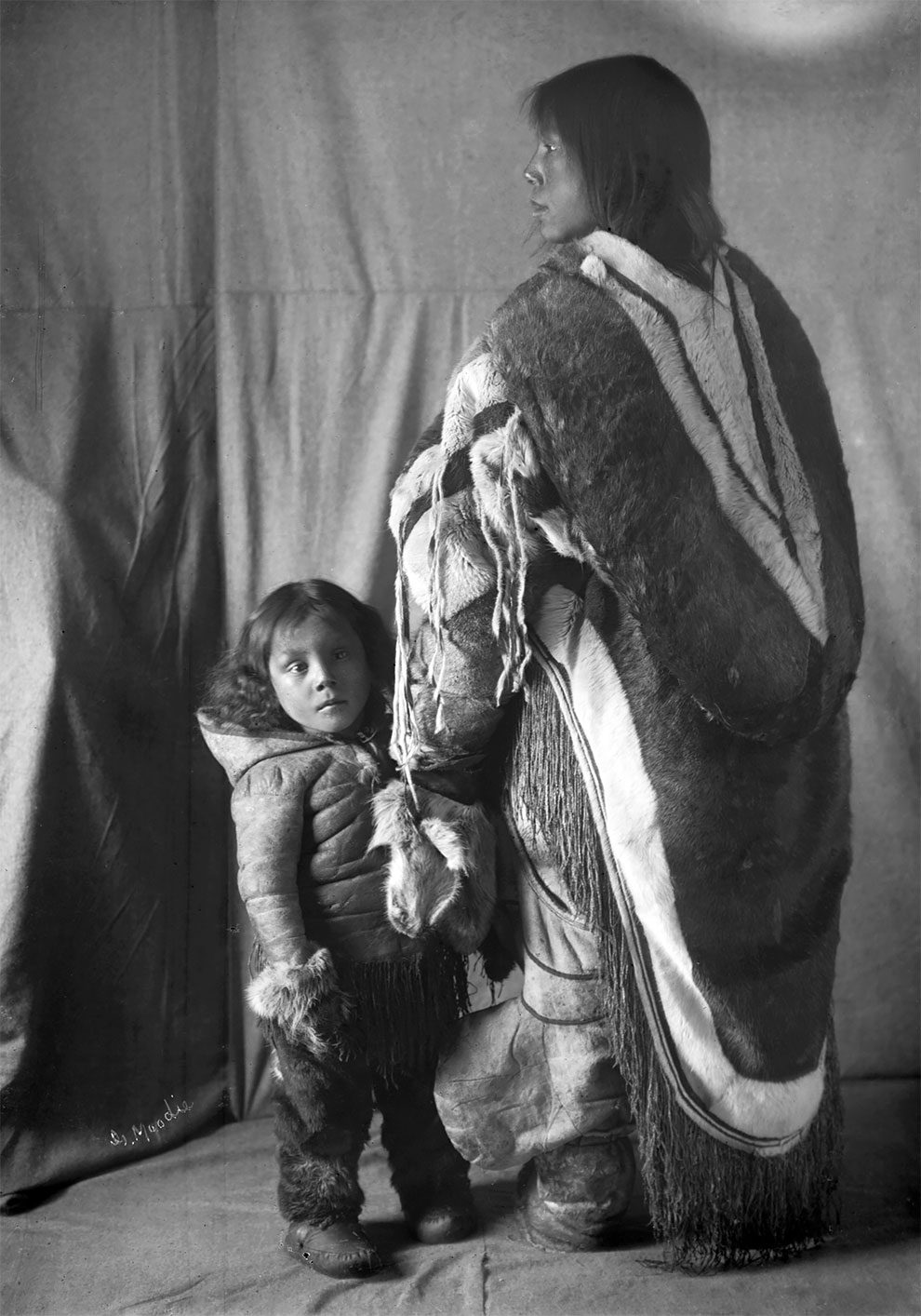 “The whole sea and land as far as the eye can see lends itself to inspire ghostly imaginations, nothing but snow & the sea in an unbroken expanse of ice and snow. In the sunshine it is beautiful, but at night it looks uncanny, the northern light shifting and changing all the time” 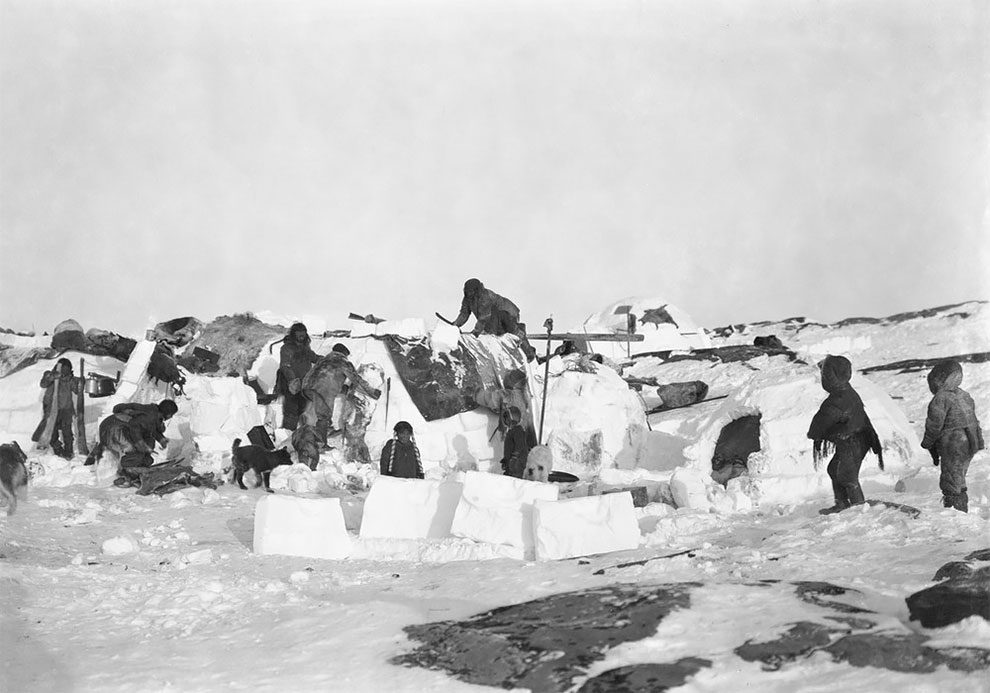 “There is a shooting and trapping mania on board at present, a good thing as it keeps them in health and good spirits”, she writes, also mentioning plenty of dances and football matches. 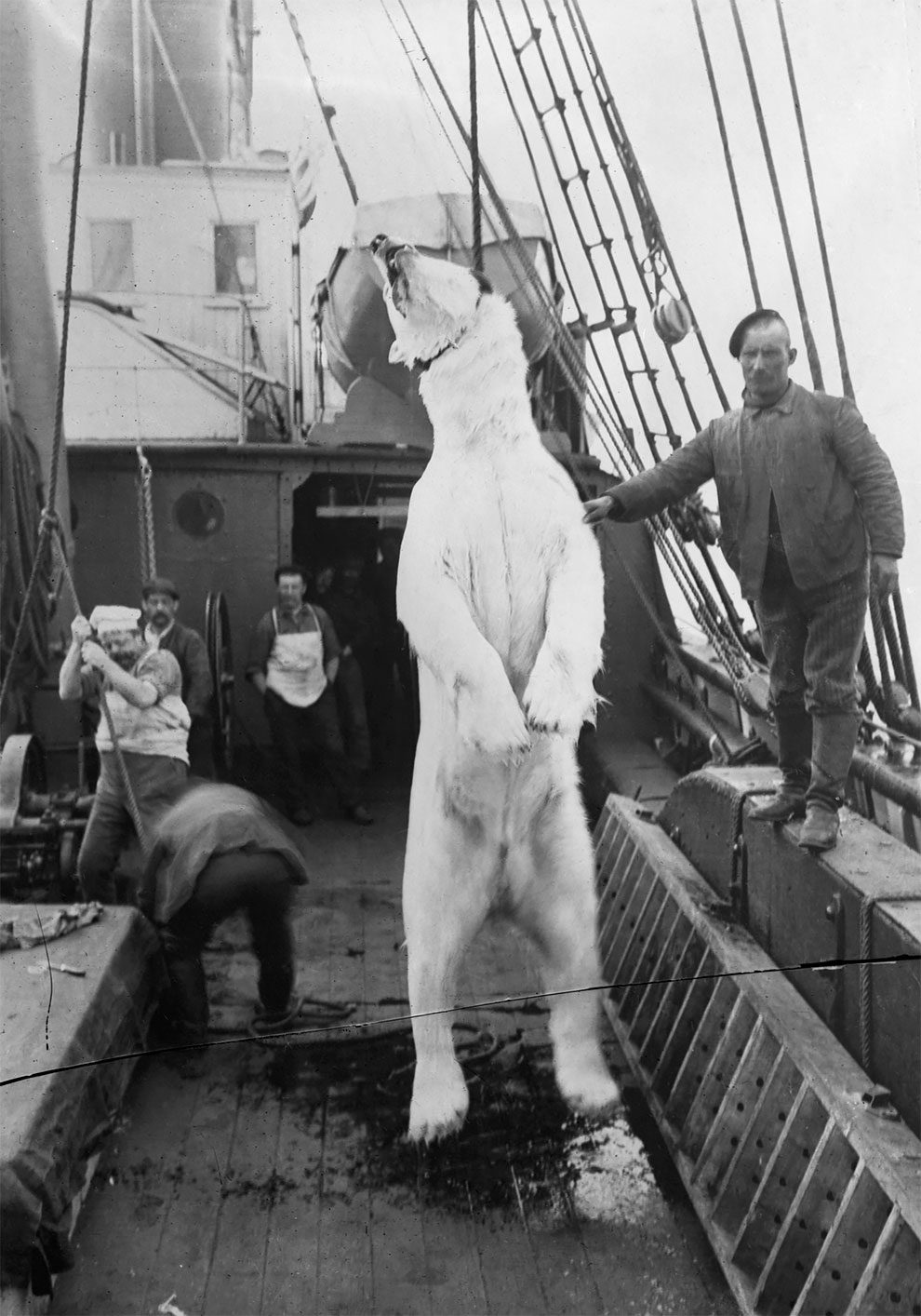 She complains of the challenges of trying to take decent photographs amid waterlogged supplies and harsh weather. 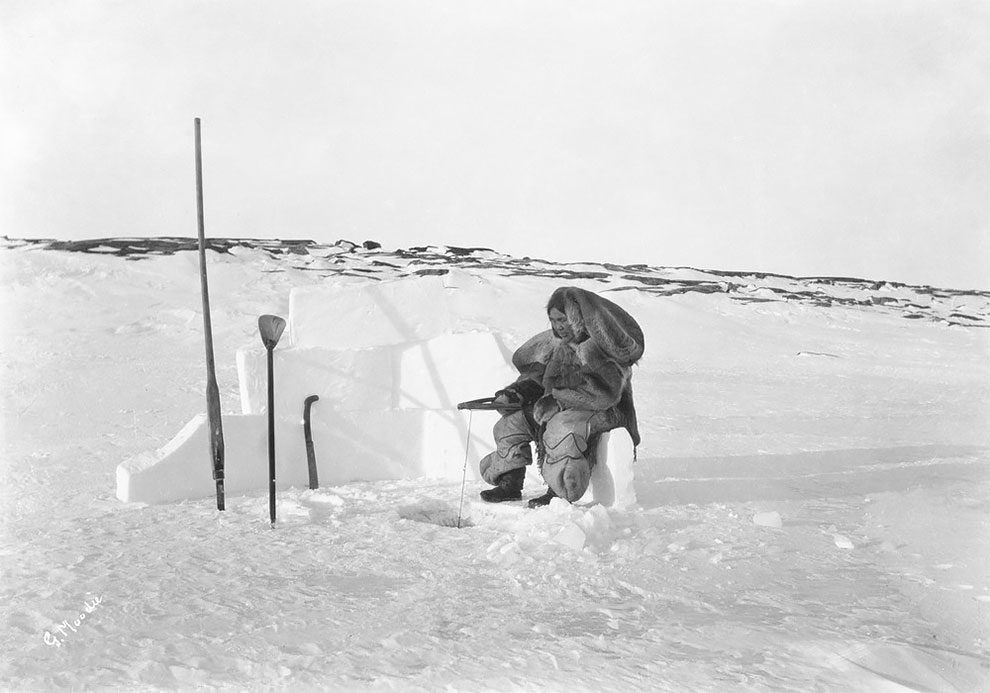 Geraldine also writes of improving her technique, while photographing this boat, the Arctic.

“There has always been such a glare of snow with nothing to relieve that it gave no definition when photographed, and made a poor negative. I tried it under every condition of light, and finally found by stopping my lens very low and taking the photo when the afternoon sun was very bright, throwing strong shadows that I succeeded in getting a fine negative”

Dominion Government steamer Arctic in front of an iceberg, at the mouth of Hudson Strait, Nunavut, c.1904: 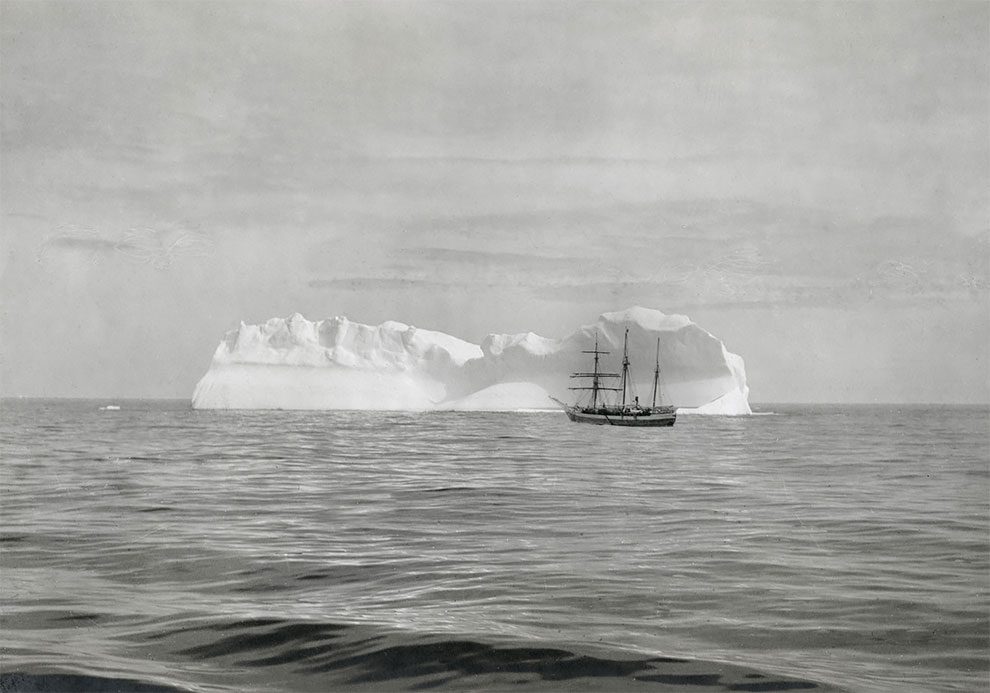 She went on to work further south in the city of Regina, Saskatchewan, and when accompanying John on expeditions for the Canadian Pacific Railway. With hundreds of emotive and lyrical images to her name, her legacy is of a true photographic artist, rather than a dispassionate documenter of rural life. 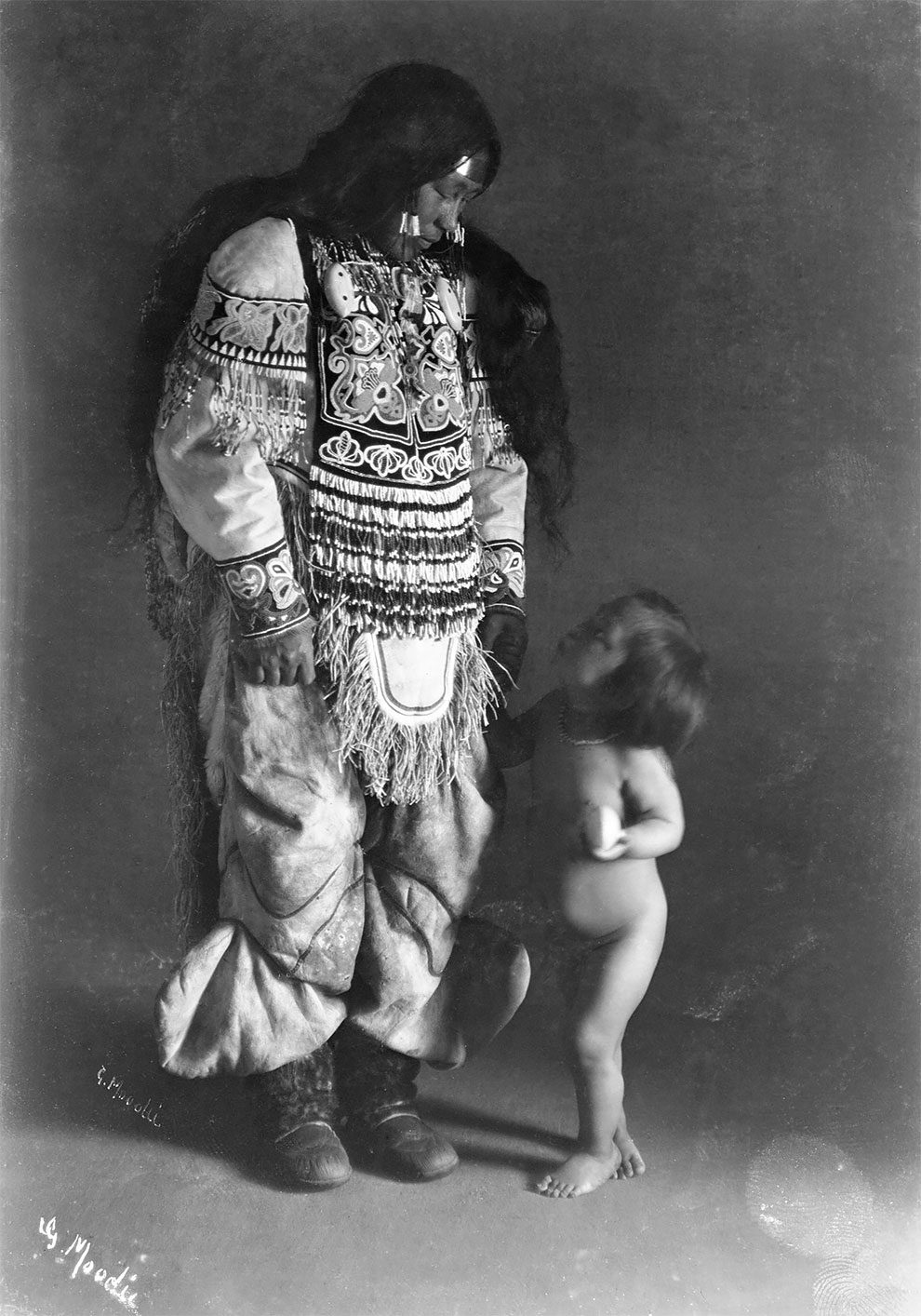 This Public Toilet At The Central Bus Station In Russian Voronezh Is So Romantic They Lit Candels In It
This 87-Year-Old Grandmother Creates Her Beautiful Artworks Using Microsoft Paint
This Photographer Tied A Model Up In Shark-Infested Waters And It Was More Beautiful Than Scary
Stunning Milky Way Formation Above the Isle of Wight
Beautiful Scenery of Hulun Buir Grassland
Beautiful Portraits Of Gorgeous Japanese Women By Kato Yasuo
Artist Turned 3000 Kilograms Of Clothing Destined For Landfill Into An Art Installation
This Small Village In Indonesia Is Literally Made Out Of Rainbows
The Atlas of Beauty: Photographer Mihaela Noroc Provides a Rare Look at Women in North Korea
Vedema: A Fire Harvests The Stone
Meet The NY Taxi Driver Who Moonlighted As A Photographer And Captured His Passengers For 20 Years In Some Very Candid Shots
The Oddest Subway Station In China
People Of The World: Māori In Stunning Photographs By Jimmy Nelson
Fully Tattooed, This Young Polish Man Is A Real-Life White Walker
Photographer Jack Daly’s Satirical ’80s Ads Challenge The Concept Of Masculinity
A Landscape Photographer Turned The Camera On Himself To Take A Set Of Incredible Selfie While Visiting Some Of The World's Most Beautiful Destinations
Beautiful Nordic Nature Through The Lens Of Photographer Roger Brendhagen
New York Homes Become ‘IGLOOS’ After Ice Blast Sends Temperatures Plummeting
Alone Together: Photographer Portrays Ordinary People In Their Homes In A Downbeat And Ultra-Stylised Manner
"Naked City": Lost In Shanghai With Photographer Liu Tao
Cats Are Ninjas, And This Japanese Photographer Proves It
"The Traveler Saga": Explore The Beautiful Outworlds And Creations With Gorgeous Concept Art Of Tyler Smith
How Soviet Space Dreams Became A Photographer’s Inspiration
This Residential Complex Is Fully Submerged In Natural Sea Of Green
beautiful, captures, female, frontier, photographer, white