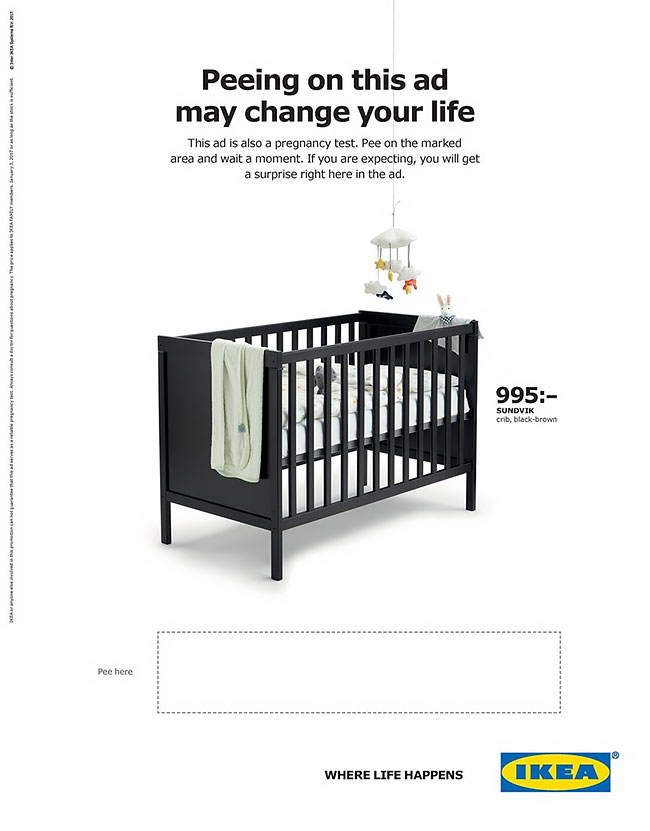 Standard pregnancy tests are so 2017 — this year it’s all about weeing on magazine ads to find out if you have a bun in the oven. IKEA’s magazine ad in Sweden is causing a splash thanks to its revolutionary built-in pregnancy test, which expectant mothers can claim for a discount on cribs. The colourful ad idea came from Swedish agency Åkestam Holst, which has held the IKEA account since 2013.

The ad, which is running in Amelia magazine, a women’s publication in Sweden, uses a similar technology to your standard pregnancy test, but rather than yes or no symbols showing up, the page will give you a coupon for discounted cribs if you’re pregnant.

“In order to make the interactive functions of this ad work in reality, we had to make several technical advancements,” Åkestam Holst said in a statement. “The pregnancy test strip was used as a starting point, which relies on antibodies that bind to the pregnancy hormone hCG, resulting in a colour change. For scaling up of this technique and adopting it to the physical format of a printed ad, Mercene Labs has used their experience in development of surface active materials for microfluidics and medical diagnostics.”

After the deed is done, expecting mothers will then need to take the pee-soaked paper to their local IKEA to redeem it. 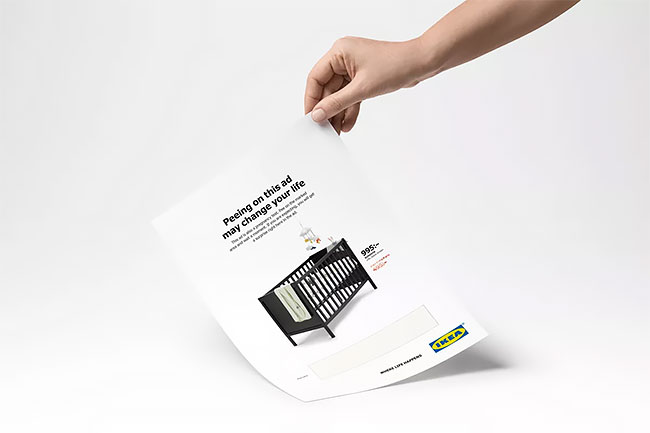 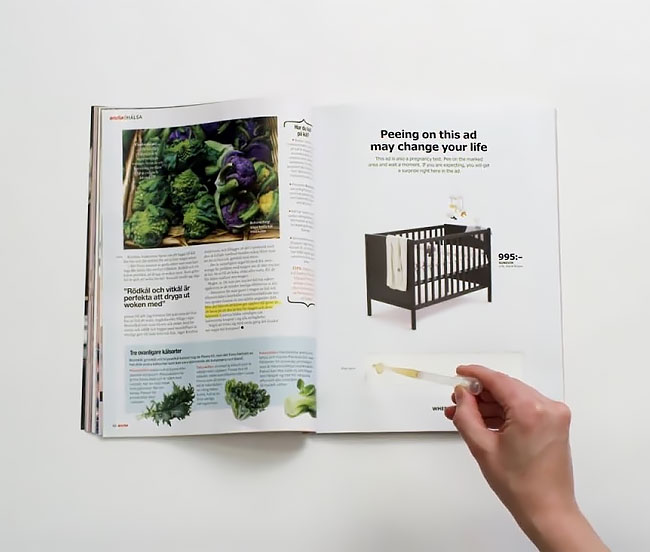 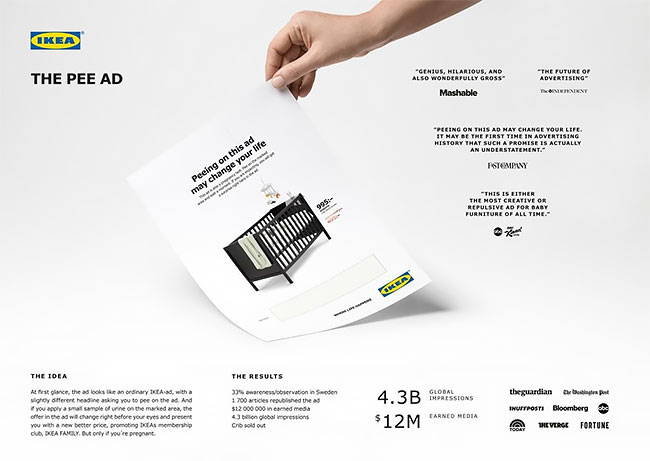 Valeriia Karaman for OOB Magazine
These Zoom Backgrounds Turn Your House Into the Cover of An IKEA Catalog
Eye-popping China Int'l Optics Fair
Vintage Cover Photos of Popular Mechanics Magazine in the 1930s and ’40s
Artist Uses Neural Network To Create These Images Of The Hit Series Stranger Things
This Is a Real Wheelchair Car from 1956
"Boyfriend Hug" Speakers Are The Perfect Way To Look Absolutely Normal In Public
The Biggest Anamorphic Illusion In The World Has Been Successfully Revealed On The Largest Outdoor Advertising Screen In South Korea
Rideable «Kuratas» Robot Mecha Unveiled at Wonder Festival
"How Do You Want to Be Remembered?": This Company Develops Biodegradable Coffins Made from Mushrooms
Meet Selk'bag, The Wearable Sleeping Bag
Tiny Critter Becomes a Big Wheel
Russian Oligarch Exclusive Car For Sale
The Model of James Webb Space Telescope
Taiwanese Modder Turns Doom Eternal's BFG 10000 Into The Ultimate Gaming Rig
Beautiful Photos of Fiat X1/9, One of the First Truly Affordable Mid-Engine Sports Cars
People Of Bell Labs In The 1960s
A Gallery Of Stunning Photos Of Classic Range Rover Conversions
This 3D Printed Coffee Table Shows Art As Seen Under The Microscope
Astonishing Artificial Limbs Created By Scott Summit
Botanicalls Kit
Phoenix Vehicle Made From Bamboo Cane Is The New Green Car
Spectacular Photos Of The Lost Train Graveyard In Bolivia
Carbon Aerogel - The New Lightest Material
advertisement, IKEA, magazine, pee, pregnancy, test