Couple Travels Country In Their Tiny House They’d Built Themselves For Under $20,000 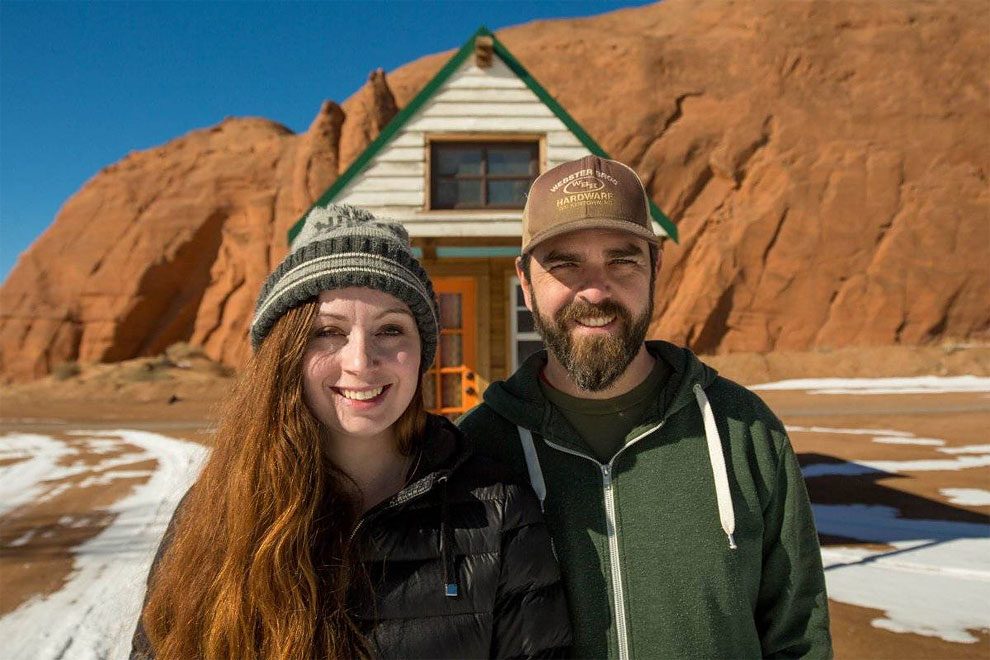 Alexis Stephens and Christian Parsons are an ordinary couple who built an extraordinary house for themselves, which is just 130 square feet (12 square meters) big and has wheels. The house has a rustic cabin, a kitchen, two lofts, a bathroom and a shower, and most materials in it are recycled. They built this house in an attempt to simplify their surroundings. The couple is now travelling across North America, meeting with tiny home owners communities, collecting stories, and documenting tiny house projects for a feature film.Take a look inside the couple’s amazing tiny house.

“I’m a recovered pack rat,” Alexis says. “For me, I wanted to make a lifestyle decision to simplify my surroundings.”

The tiny house presented the perfect solution. About a year ago, her partner Christian broke ground on the home of their dreams. 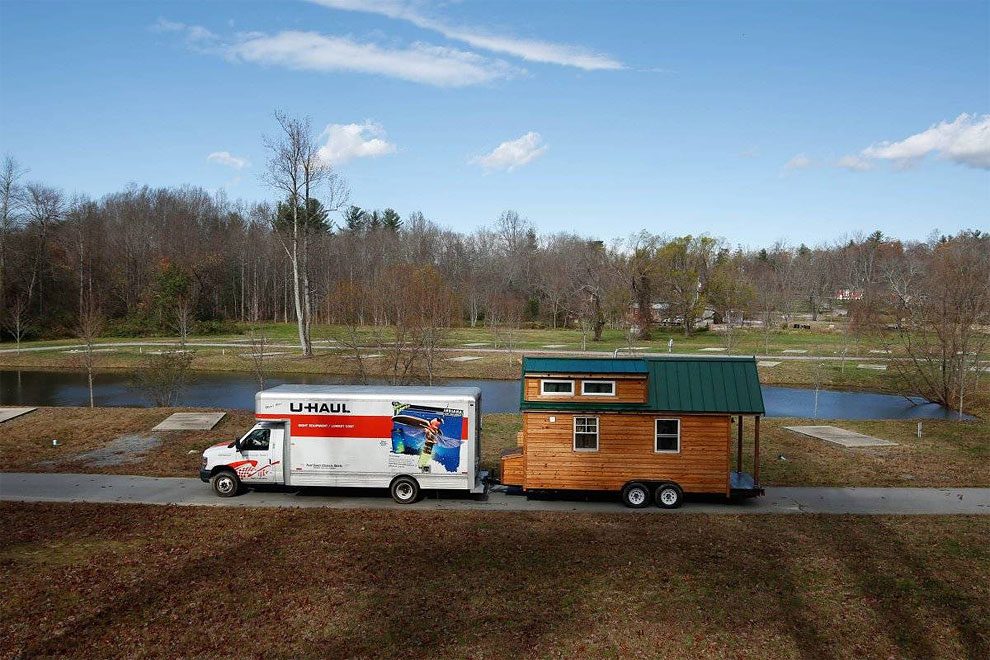 Christian was no stranger to renovations. His dad worked on every house the family lived in for “almost the entire time we lived in it.” 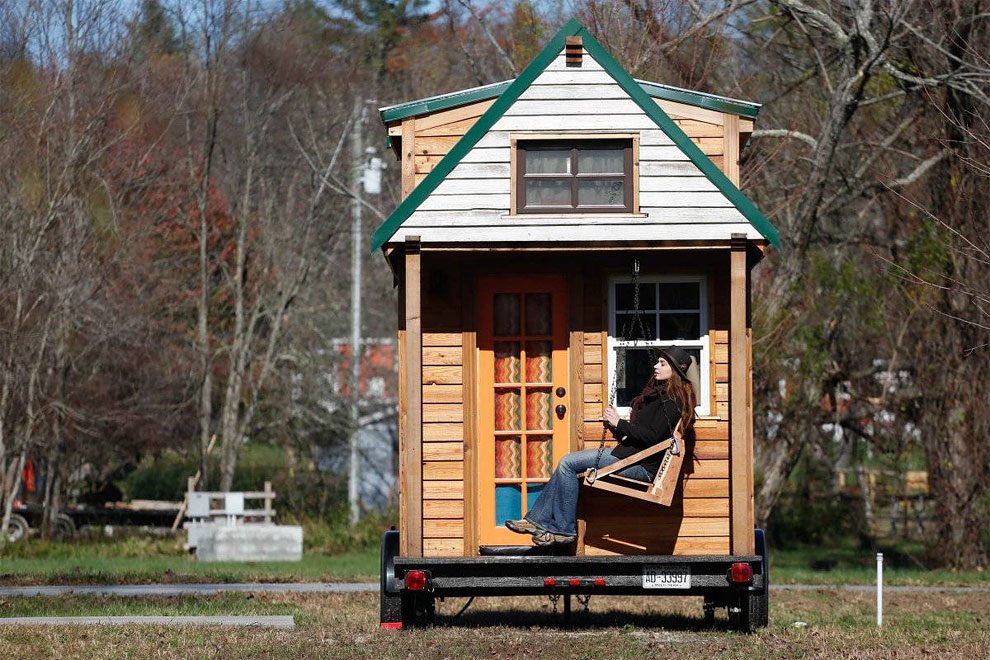 At 130 square feet, the house has a rustic cabin meets Pottery Barn catalog feel. It cost under $20,000 to build. 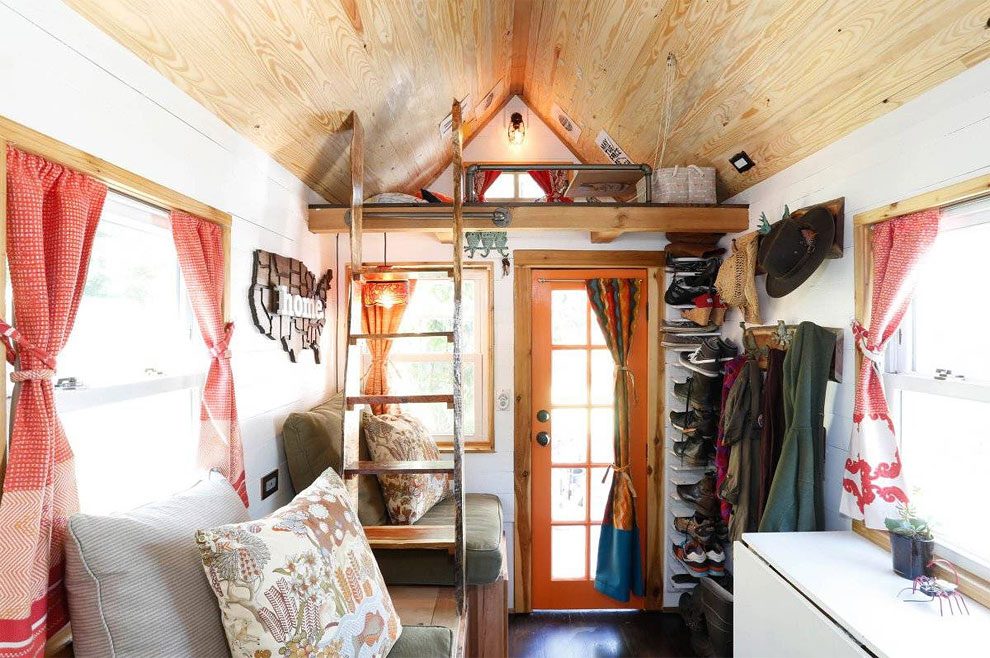 Most materials are recycled. The wood was salvaged from a farmhouse set to be demolished, and the curtains came from scraps found at a furniture show. 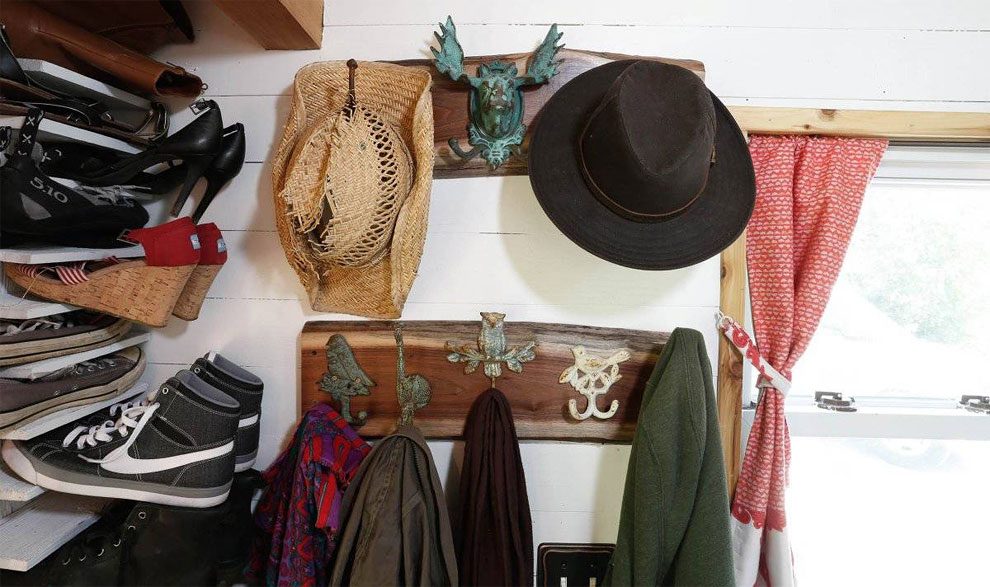 “I like to cook so it was important for me to have more than a cooktop,” Alexis says. The full kitchen includes a fridge and an oven. 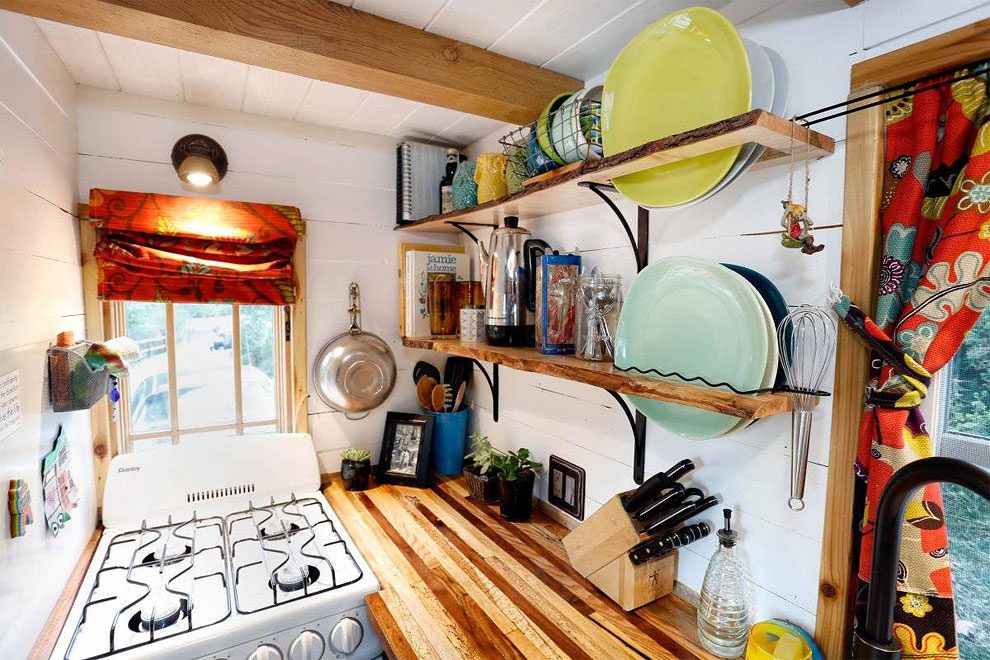 Christian handcrafted the butcher’s block countertop from five different kinds of trees that fell in a tornado in his parent’s backyard. 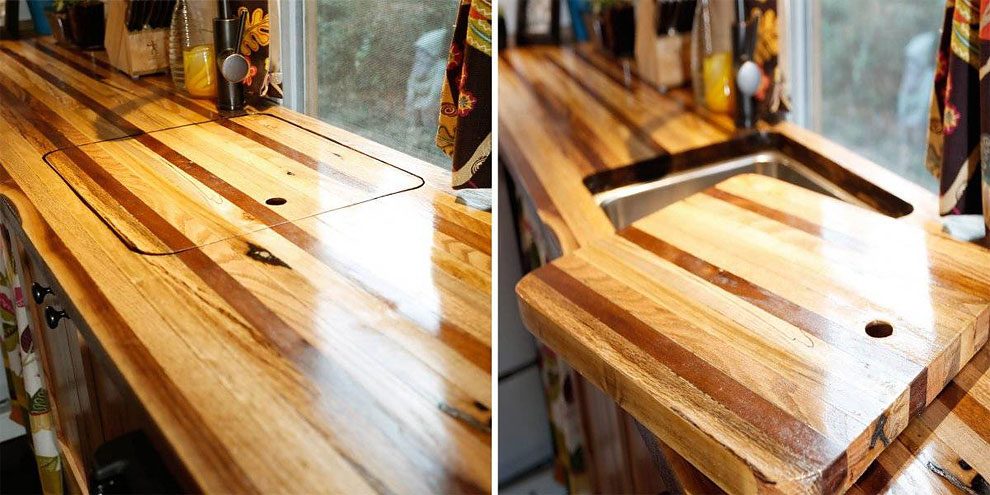 The bathroom door slides to reveal a full-sized pantry. 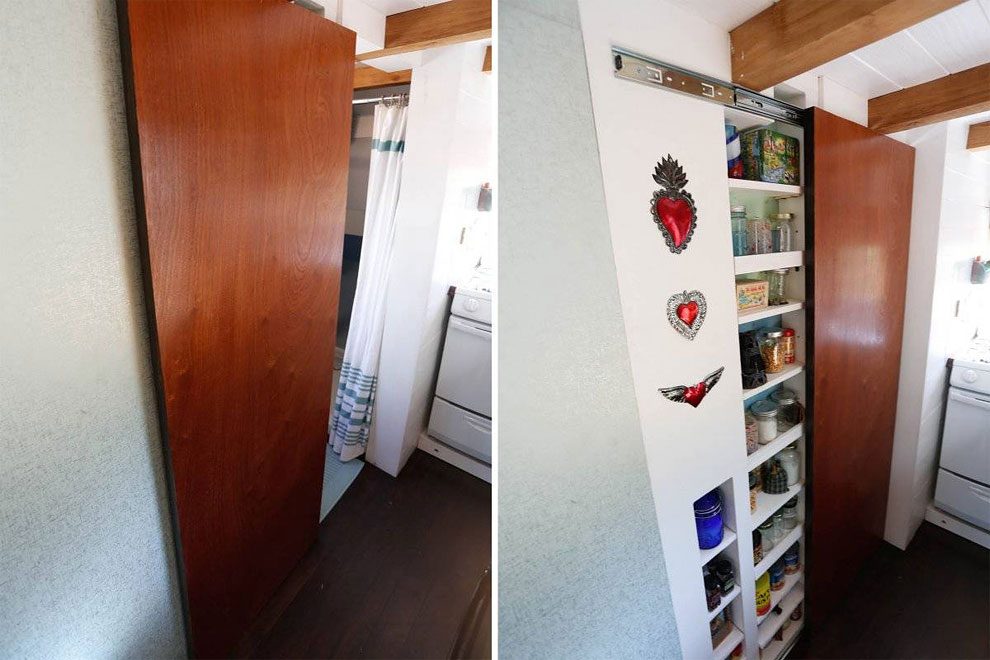 “To be surrounded around the things you love and need [makes] your daily living experience … a little more joyful,” Alexis says. 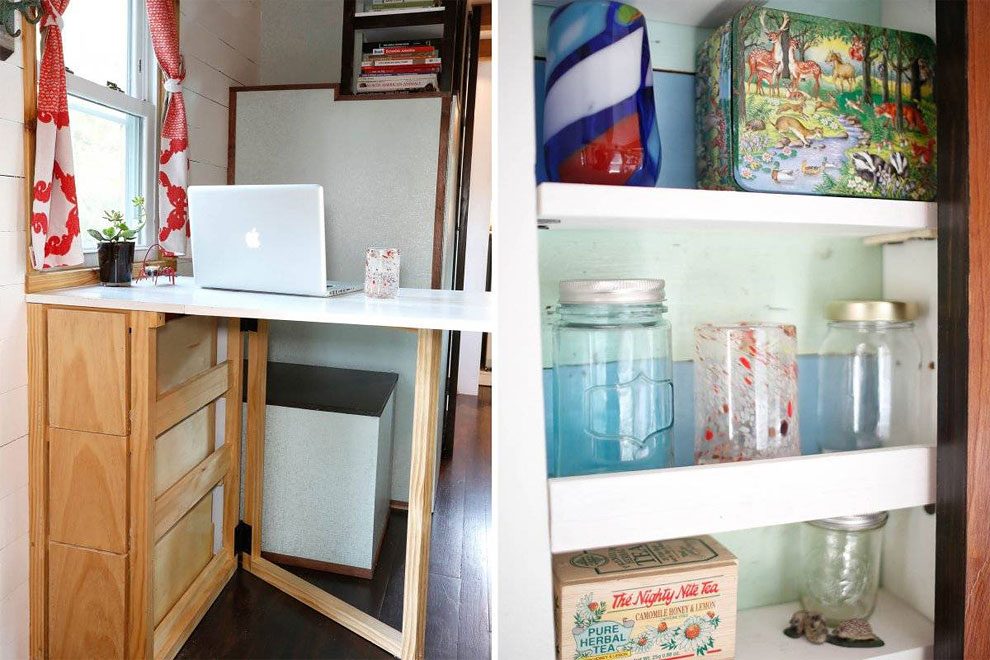 The couple splurged on space for the shower, as well. It’s 34 by 36 inches, larger than most tiny house showers, and includes a tub for “feet washing.” 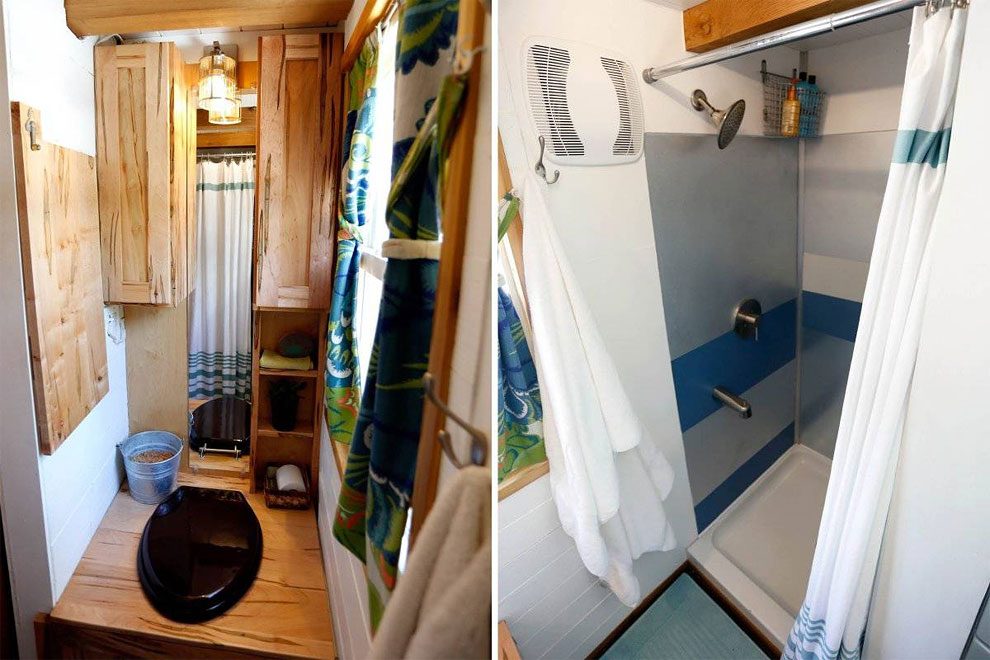 The master’s suite is located in a loft upstairs. 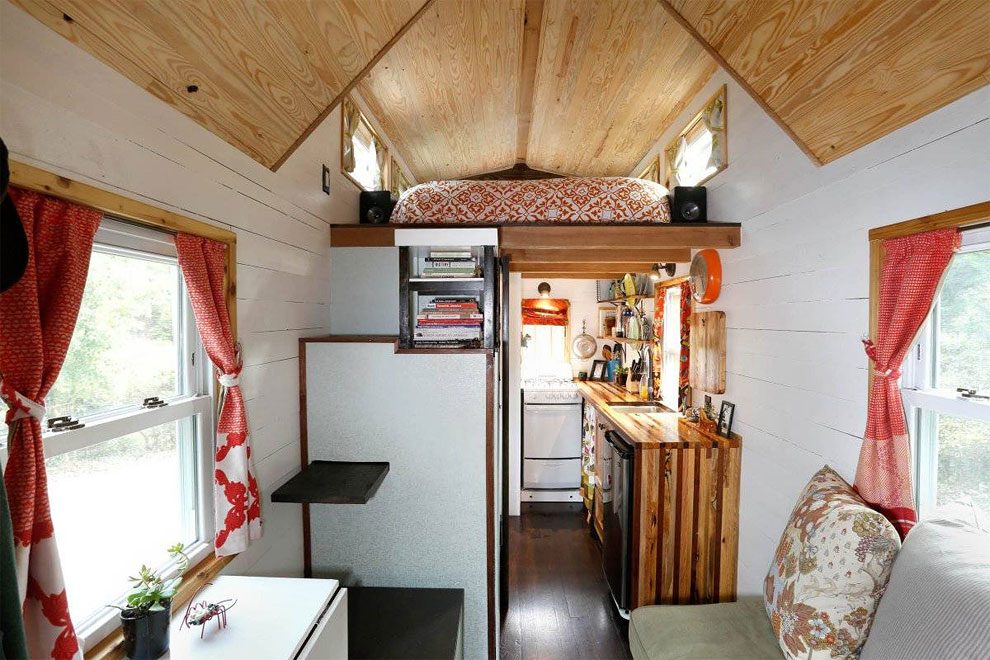 It has a queen bed and an abundance of windows, which helps make the tight quarters feel a little more spacious. 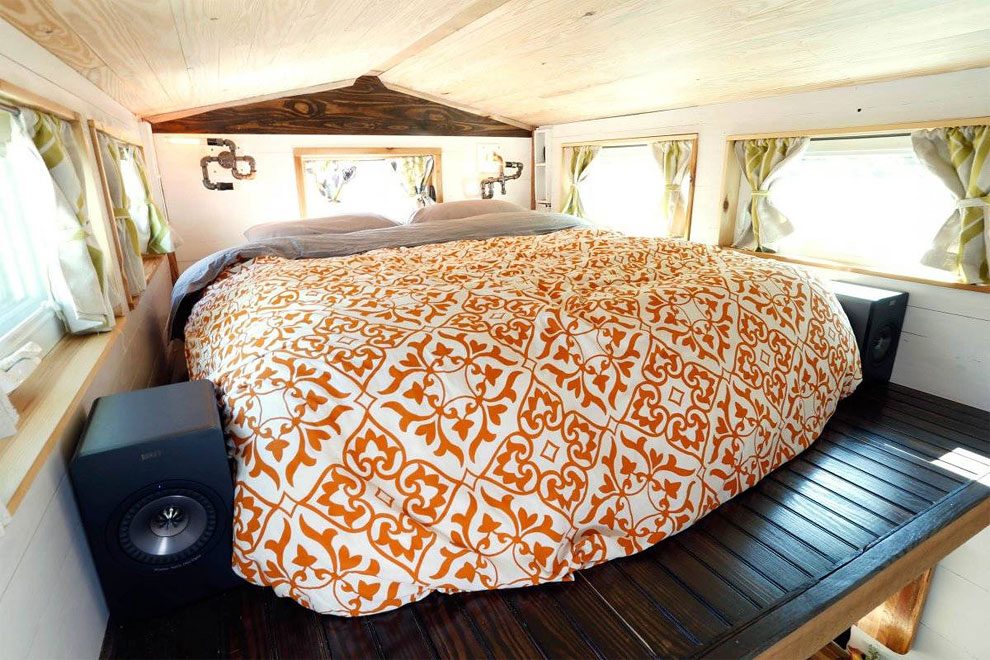 Even the lighting fixtures offer a small way to personalize the home. 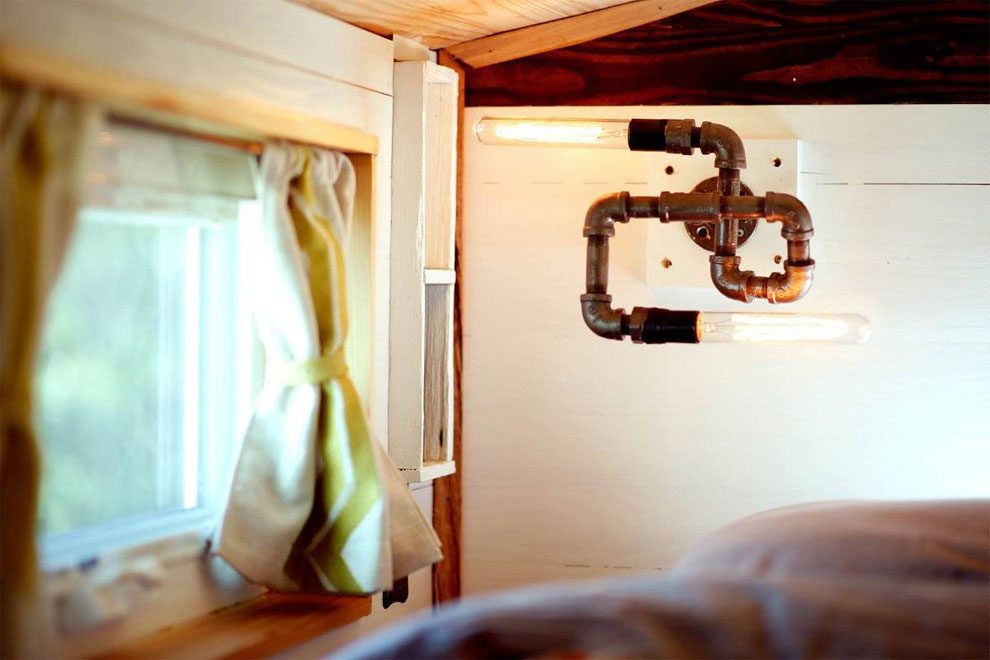 Across the way, there’s a second loft for Alexis’ son. It’s decked out with glow-in-the-dark stars and a drop-down desk. A curtain divider gives some privacy. 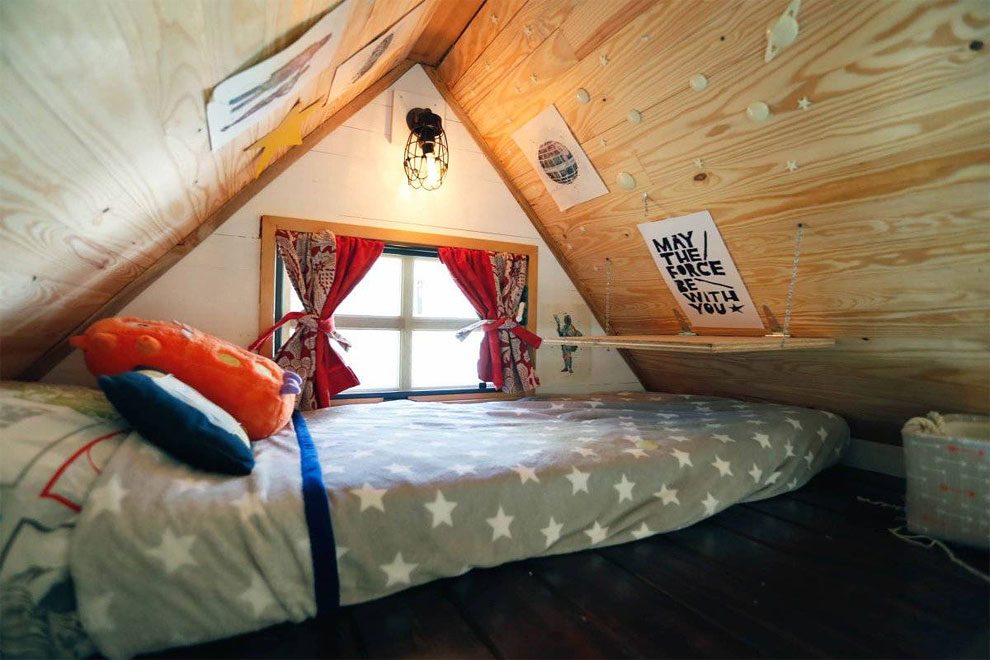 Before the couple even started building, they knew they wanted to travel in the house. 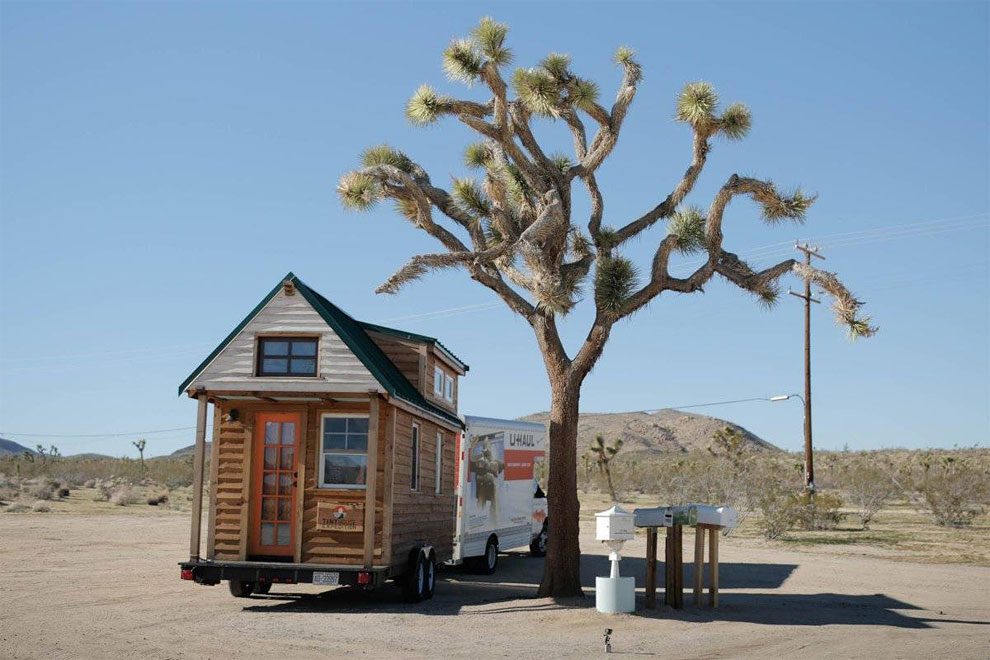 Alexis and Christian work as documentary filmmakers, and saw an opportunity to tell other tiny homeowners’ stories. They’re now one year into shooting. 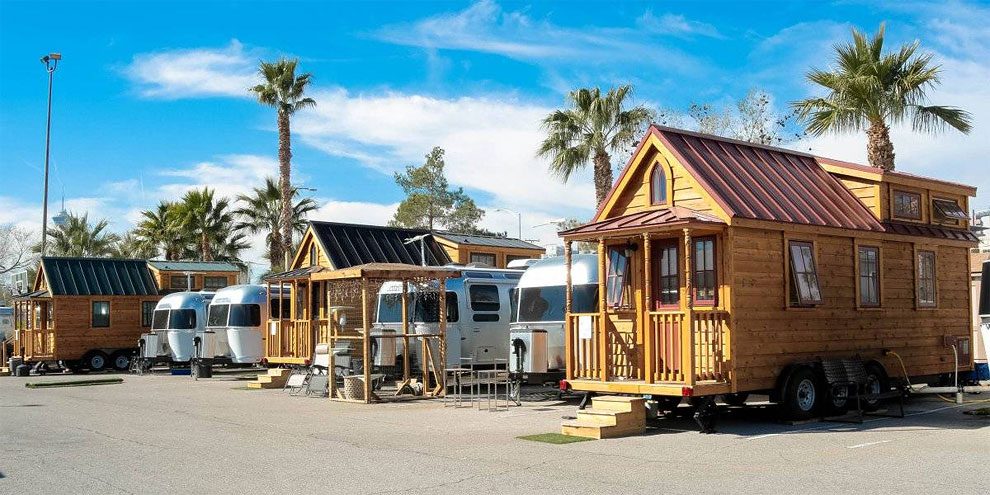 They’ve already towed their tiny home through 16 states. The couple saves money on campsites by parking alongside their film subjects. 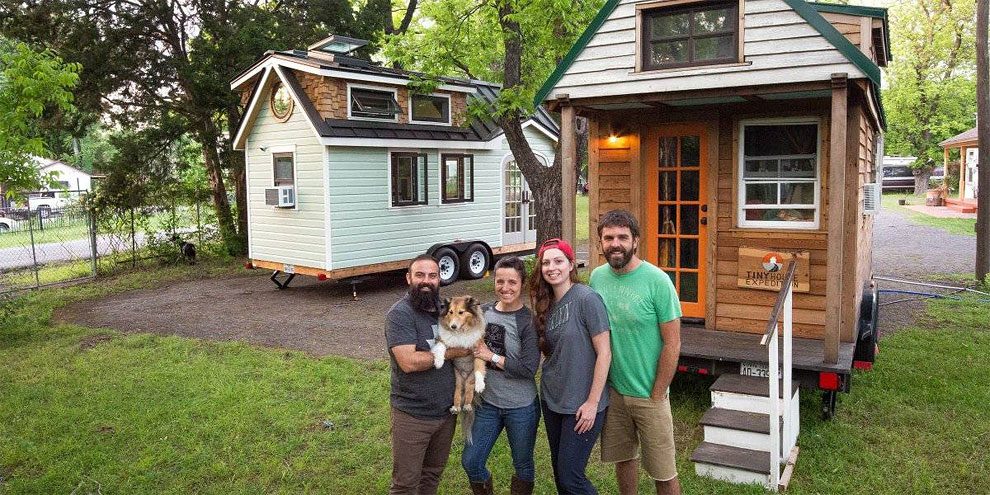 In Spur, Texas, they found a community of tiny homeowners who want to make their small town the tiny house capital of the US. There will be 20 homes by the end of the year. 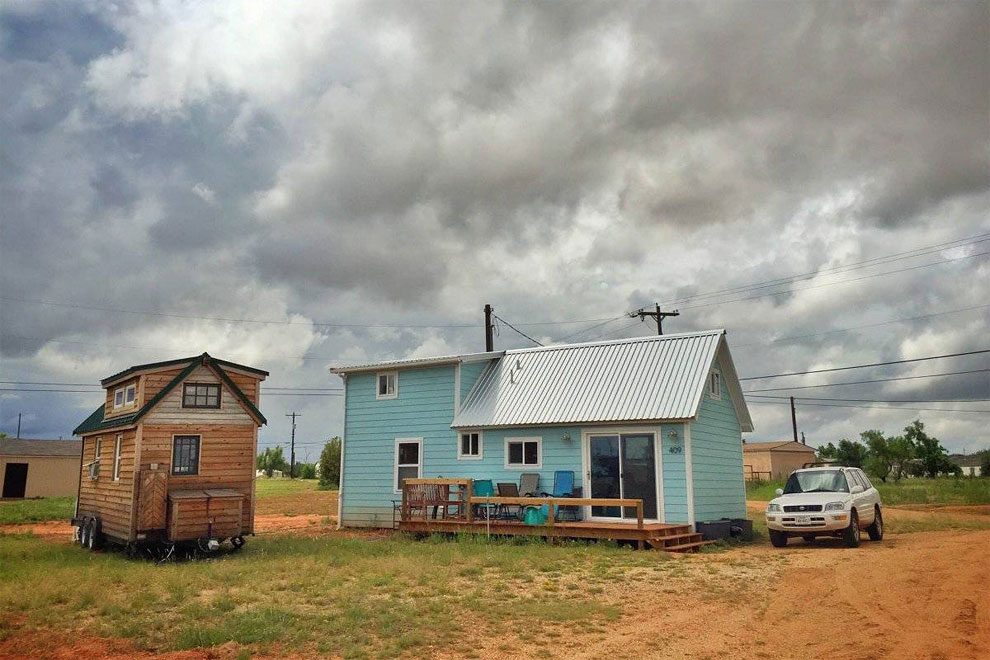 Outside Las Vegas, Nevada, the couple had the time of their lives at Llamapolis, a community of Airstreams trailers and tiny houses. The Zappos CEO calls it home. 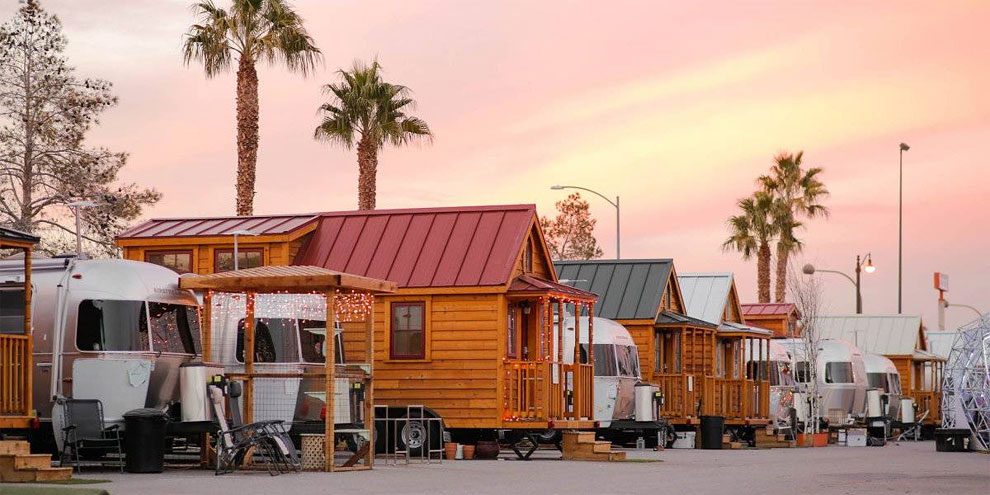 “All the houses face inward toward this common area so that there are all these spontaneous social encounters that happen every single day,” Alexis says. 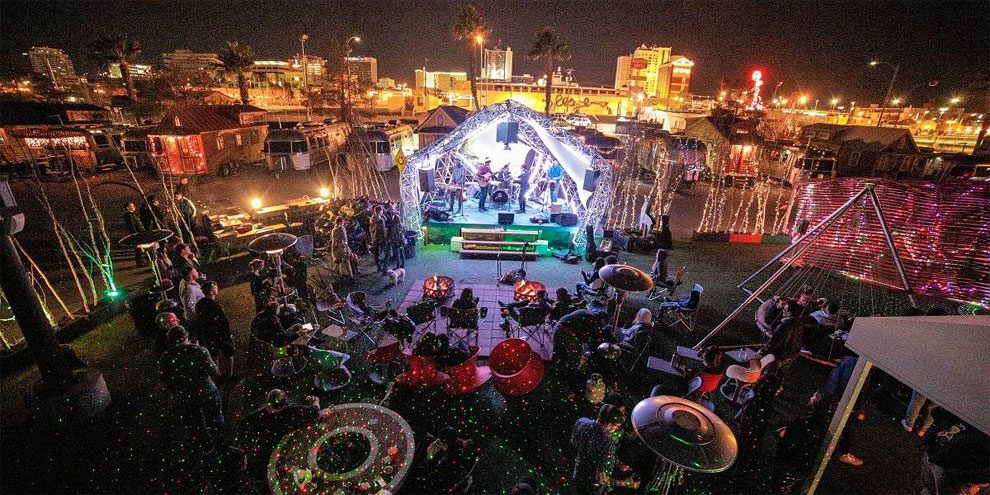 And sometimes, they find themselves parked in the middle of nowhere. Many cities effectively ban tiny houses in their zoning laws. 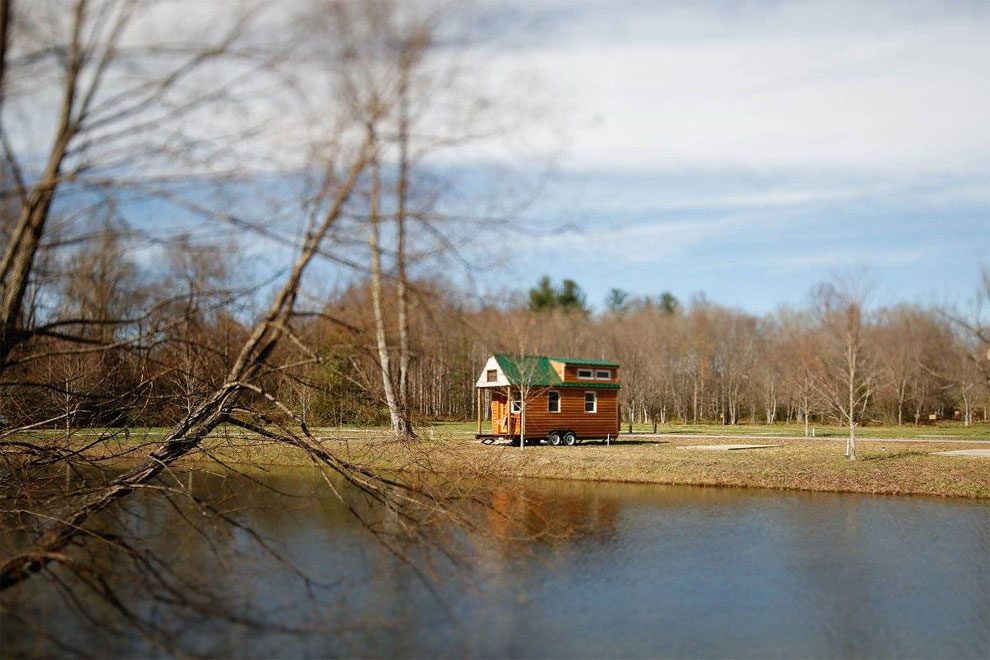 Alexis and Christian learned that across the country, tiny homeowners living in stealth find support in meet-up groups. 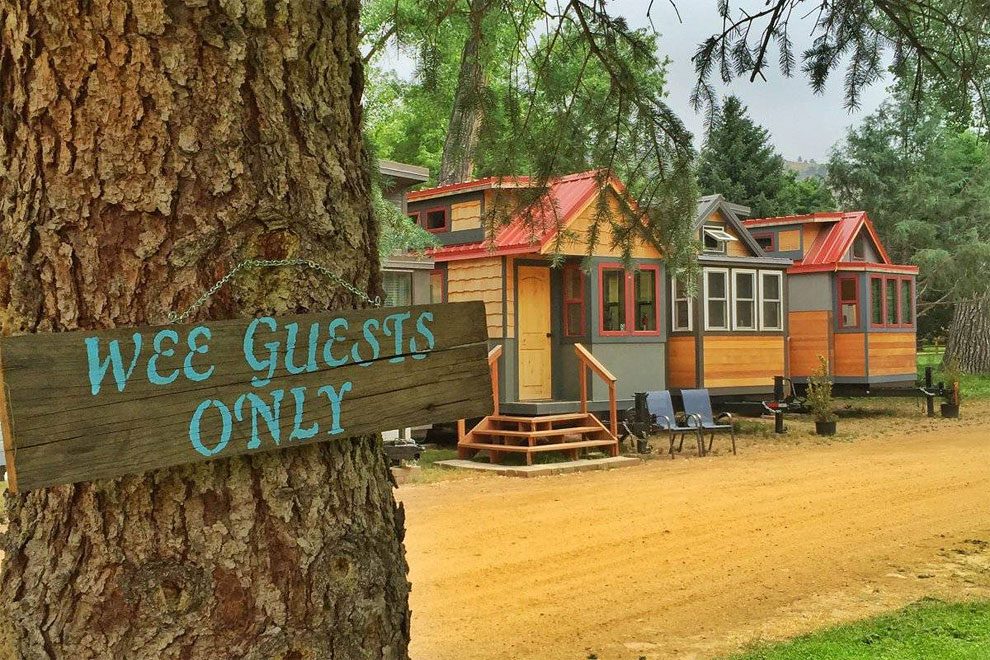 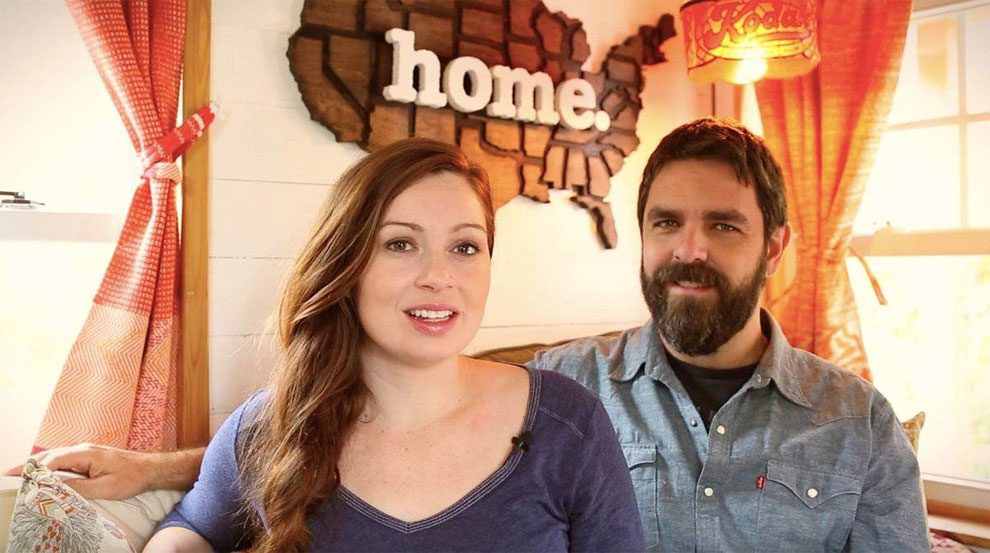 You can learn more about Alexis and Christian’s documentary film on their project website. 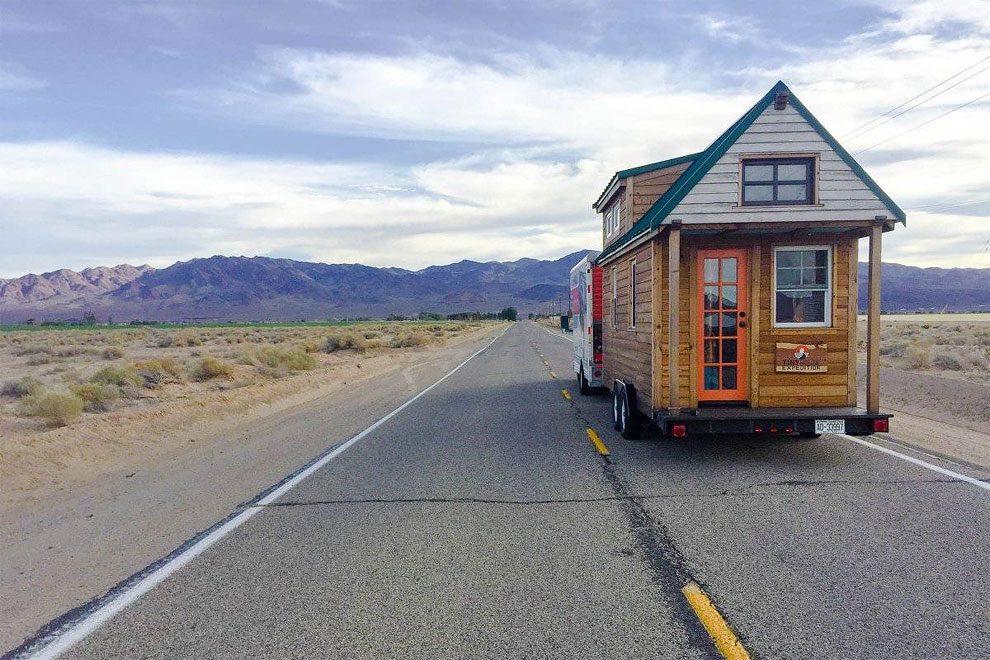 Bizarre Photographs of Thailand’s Buddhist Hell Garden
Russian Dental Clinic N2 – Probably The Scariest Dental Clinic In The World
Curated Images And Textures From Google Maps
A House Encased In Ice On The Shores Of Lake Ontario
The Illustrator Has Created a Dreamy World that She Travels Through with Her Boyfriend
Parts Of Hawaii Are Covered In Snow
A Neighbourhood Pool Parties In Peru
Real Ice Carousel Made On A Frozen Lake Using A Chainsaw In Finland
Slope Point Trees: Beauty Created By Force Of Nature
Magical Photographs Of The Snow-Covered Small Japanese Town
The "Suburban House" Project
Amazing Aerial Highlights From The 2015 Nat Geo Traveler Photo Contest
This Is Strange But True
Artist Spent 2 Years and 10,000 Lego Pieces Building This Brutalist House
35 Entrances, 3708 Apartments: Welcome to the Russian Kowloon Walled City!
This Guy Has Built A Hobbit House In His Backyard
World's Biggest Yellow Rabbit Built in Sweden
Couple Poses With Gas Masks For Their Wedding Photos To Protest Heavy Pollution In China
A Foldable Backpack Inspired by an Armadillo
When Airplane Food Was First Class – A Mouthwatering Look At What In-Flight Meals Used To Be Like In The Golden Age Of Flying
Buddhist Monk Makes Footprints In Wooden Floorboards Through 20 Years Of Prayer
This Couple Did An ’80s Themed Photo Shoot For Their 10th Anniversary
This House Don't Look Like Anything Special, But When You Go Inside...
Color Madness: Jember Fashion Carnival in Indonesia
built, country, couple, house, their, travels