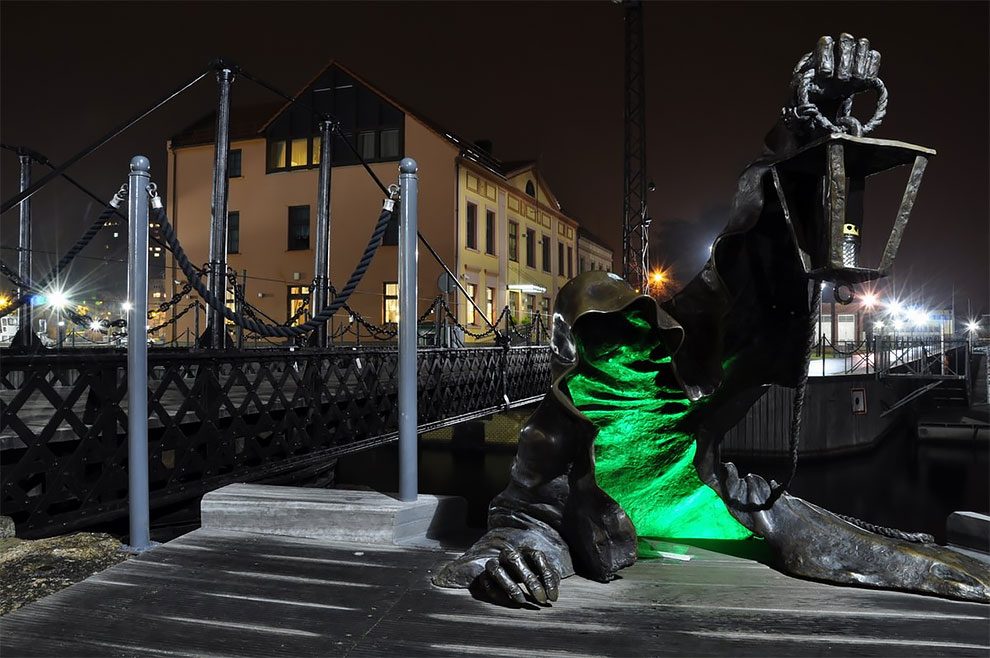 If you ever visit the quaint seaside town of Klaipeda in Lithuania, beware of the black ghost. This extremely creepy statue looks somewhat like a Dementor from the Harry Potter series, and if you’re prone to nightmares, it’s surely something out of one your very worst. 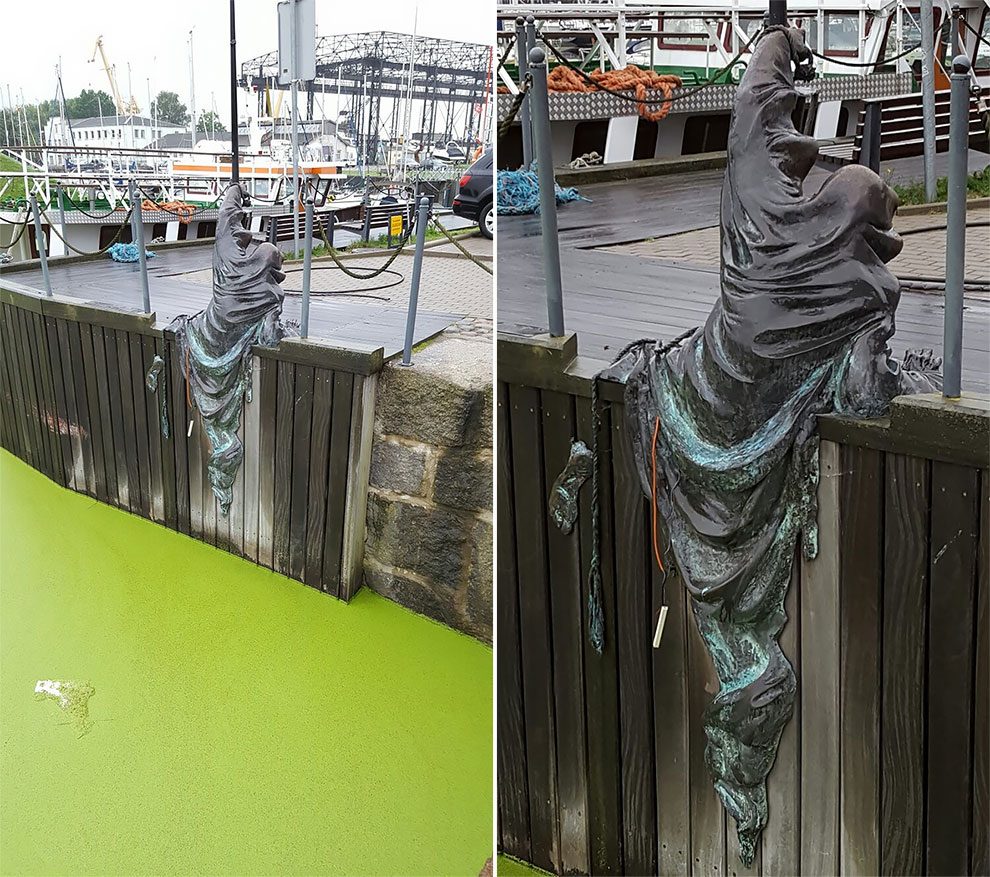 The immense bronze sculpture, known as the Juodasis Vaiduoklis in Lithuanian, is 7.8 feet tall casts a very eerie vibe. Sculpted by Svajunas Jurkus and Sergejus Plotnikovas, the mysterious figure holds a lantern in one hand, as his long, sinister fingers grip the dock. 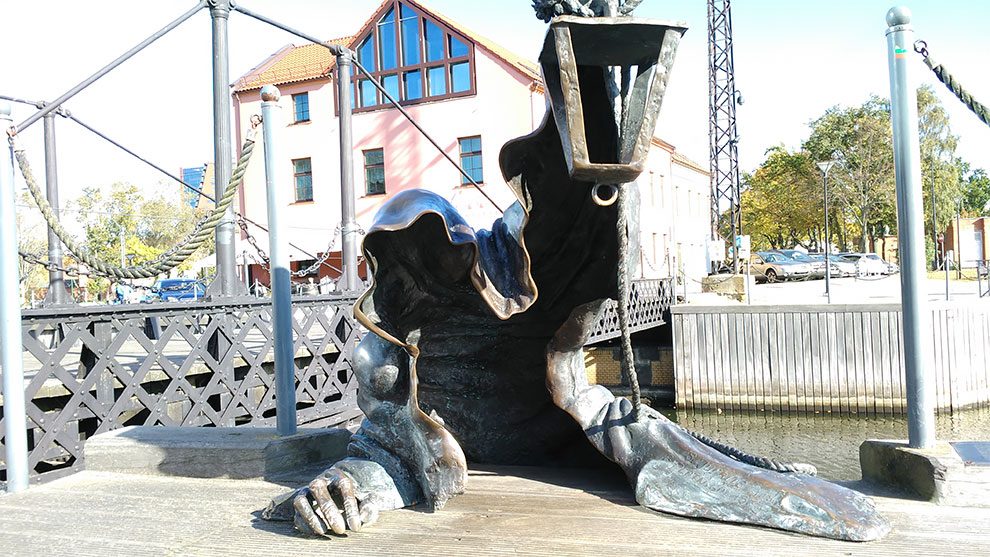 Located near the Memel castle remains, the black ghost is a reminder of not only Lithuanian legend but of Klaipeda’s own folklore and history. Legend has it that one evening in 1595, one of the Memel Castle guards, Hans von Heidi, while walking around the docks, saw a hooded ghostly figure. This “black ghost” asked him about the city’s supply of grain and timber and if the amount was sufficient? The guard replied that supplies were indeed enough, but the hooded ghost warned the guard that the stocks would soon be insufficient, and with that as quickly as he appeared, it vanished. 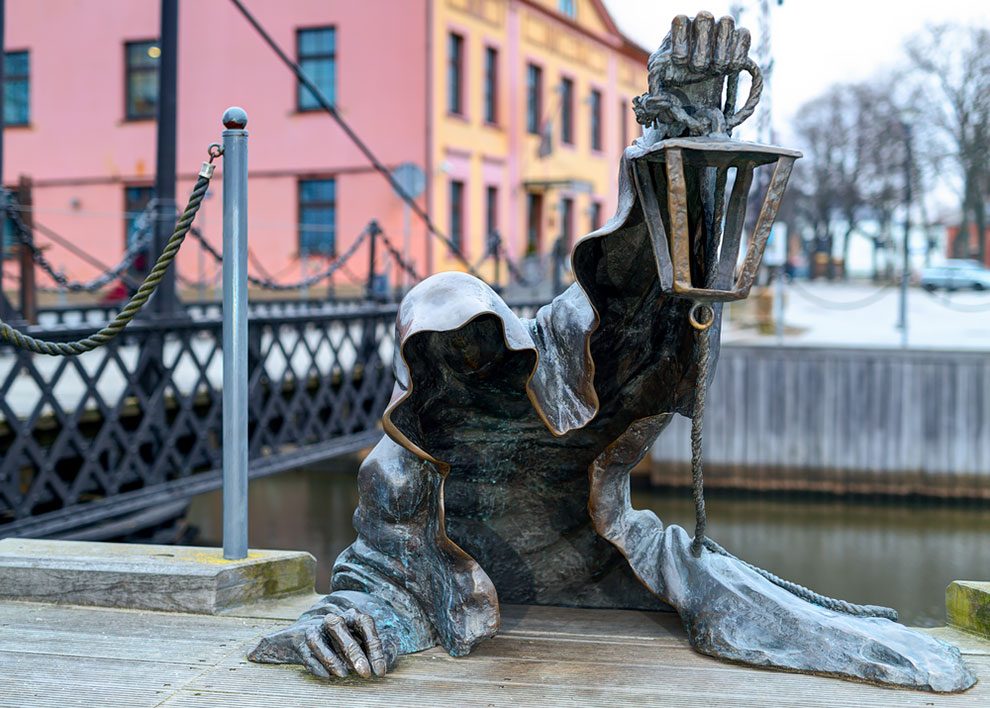 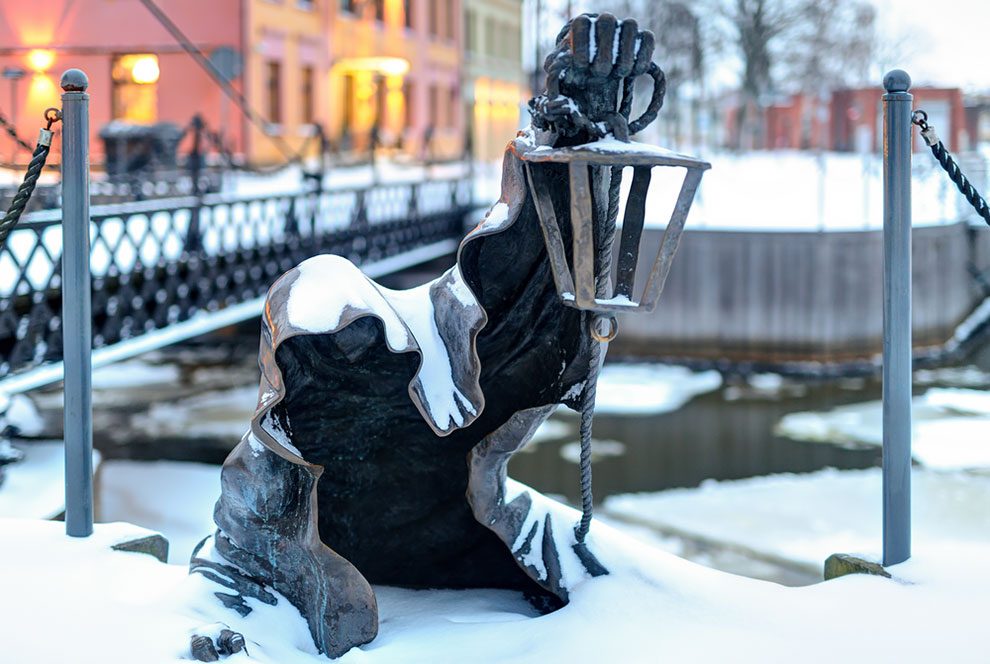 Polish Artist Turned Local Tram Station Into Floral Museum
Meet Deb: She Creates The Ugliest Christmas Sweaters Ever
Japanese Artists Continue The Tradition Of Rice Harvest Season By Creating Gigantic Straw Sculptures
This Dadbag Was Made For People Who Want A Dad Bod Without Eating Junk Food
The Traditional Rwandan Hairstyle: The Most Unique And Creative Hairstyle From The 1920
An Artist Turned Biggest Retail Brands’ Bags Into A Chairs
Amazing Vintage Photos That Show How Life Before AutoCAD Looked Like
Cute As A Button Crochet Cowls
Meet A Tiny Shelf With A Whimsical Way To Display Your Books
This Alien Face Mask Is Sure To Keep Covid At Bay
An Artist Created Stunning Looks For Halloween Inspired By Creepy Movie Characters
American Sculptor John Bisbee Makes His Pieces Out Of Steel Nails
College Student Makes Masks For The Deaf & Hard Of Hearing Community
This Artist Creates a Unique Sculptures and Landscapes from Bullet Shells and Cartridges
A World's Giant Statue of A Wolf Was Installed in Kazakhstan
Feather Brows Is The Newest Make-Up Trend Nobody Expected
Merry Imperial Christmas With Star Wars Death Star Tree Topper
A Wrecked Luxury Car Built From Over 12,000 Reflective Steel Parts
"The Upside Down": An Incredible "Stranger Things" Byers’ Home LEGO Set That Can Be Flipped Over
This Is What Men Should Wear According To Fashion Designer Walter Van Beirendonck
Surreal Book And Lamp Installations By Rune Guneriussen Illuminate Norway’s Forests
Fine Art Turned Into Clothes Lets You Wear Your Favorite Paintings
This Baby Yoda Plush Was Created By A Russian Artist And Is Being Sold For $220
Dead Whale Sculpture Raises Awareness On Plastic Waste In The Philippines
crawling, creepy, ghost, lithuania, looks, statue