From basking gharial to stampeding muskoxen, these images from the Wildlife Photographer of the Year competition have been selected for a Natural History Museum book, Unforgettable Behaviour, and offer a unique glimpse into hidden worlds of animal survival and joy 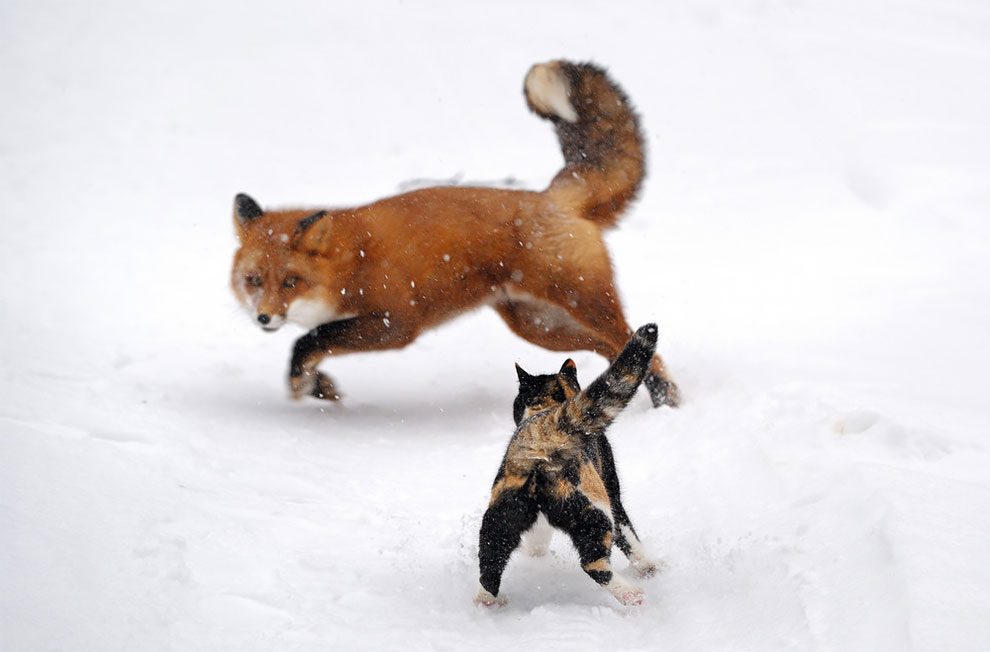 The photographer’s cat, Ryska – her name means little lynx in Russian – stands outside their cabin and with aggressive posturing warns off a fox. In winter, foxes would regularly visit the cabin searching for food. If one peered in at the window, possible when the snow was deep, Ryska would sit on the other side, fur raised, and growl. When outside, she would hold her ground. The foxes were not always frightened and so encounters could be a sort of dance. (Photo by Igor Shpilenok/Unforgettable Behaviour/NHM)

When the Lion Lies Down With the Foal, Chobe national park, Botswana. 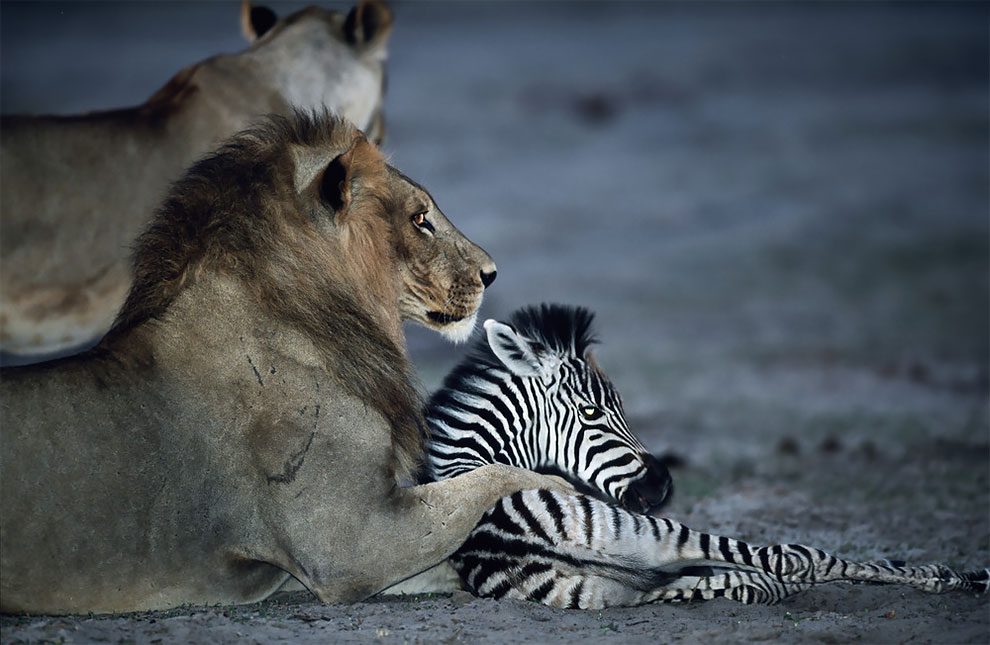 The lion gently holds a foal after it became separated from its herd while migrating through the lions’ territory. When the foal started to move away, within minutes it was caught and killed by the rest of the pride. The likelihood is the lion was playing with its young prey, but there are rare instances of lionesses taking the young of their prey and keeping them alive. (Photo by Adrian Bailey/Unforgettable Behaviour/NHM) 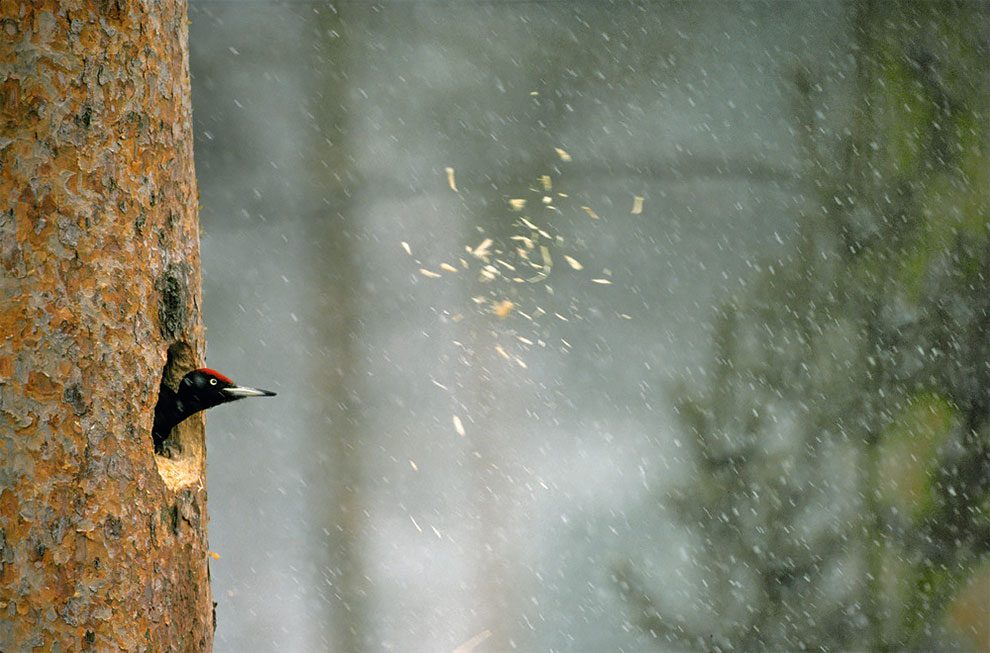 Europe’s biggest woodchipper, the black woodpecker, tosses out woodchips from the nest hole he has been fashioning. The hole is a major excavation, probably extending 60cm down into the trunk. The woodpecker’s chisel-like beak has a high-strength inner layer of bone and a flexible outer layer that helps reduce the shock of the vibrations. If the female finds the nest chamber to her satisfaction, she will lay two to eight eggs, which the pair take turns to incubate. (Photo by Benjam Pöntinen/Unforgettable Behaviour/NHM) 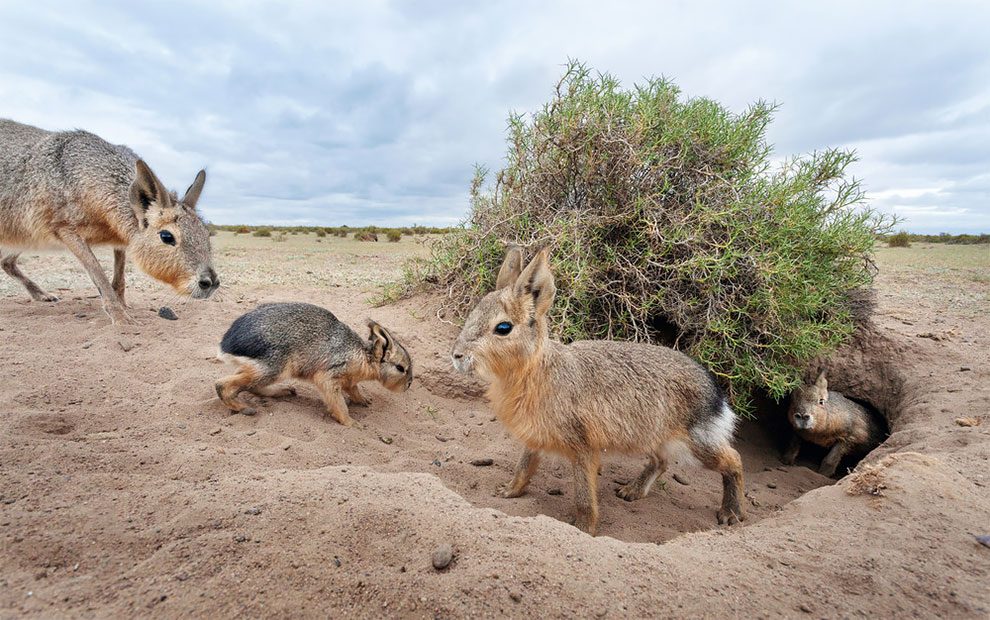 A Patagonian mara presents its bottom to its mother so she can sniff its identity. Once her twins are identified, she will suckle them near the communal den, fending off other hungry youngsters. Her mate keeps watch for predators. The rest of the creche go to ground immediately if an adult warns that an eagle or fox is about. More than 20 pairs have been known to den together. Such creche denning is unique among mammals and offers a greater chance of survival. (Photo by Darío Podestá/Unforgettable Behaviour/NHM) 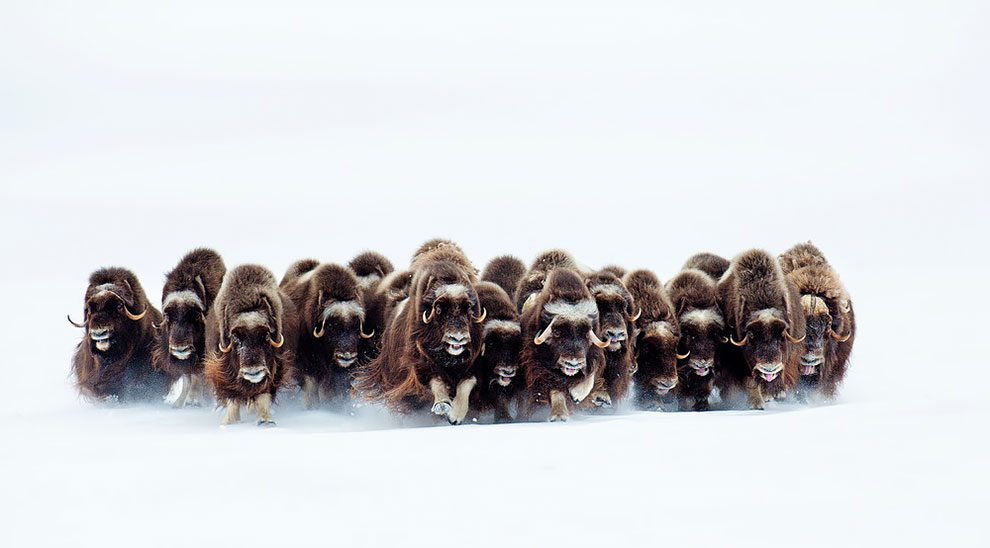 Muskoxen stampede over frozen tundra, unusual behaviour for these Arctic animals unless a pack of wolves is chasing them. The more common reaction of muskoxen is to face a predator in a line. If attacked by wolves, the group forms a compact circle, all facing out, with calves in the centre. What the wolves want to do is to spook the muskoxen and make them run, knowing that the weaker animals can be picked off by the pack. (Photo by Eric Pierre/Unforgettable Behaviour/NHM) 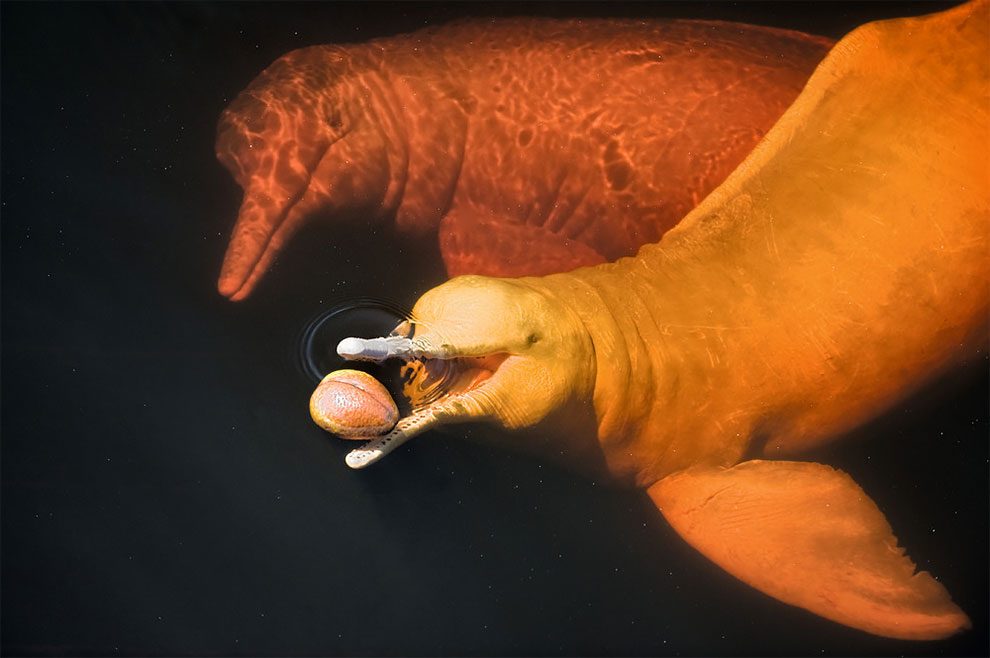 A male Amazon river dolphin, or boto, throws around a macucu nut, watched by other botos – possibly pure showing-off. Ball‑throwing seems to occur mainly among groups of adult males as a sort of aggressive competition. Any object will do, a branch, a ball of mud, or even a turtle. (Photo by Kevin Schafer/Unforgettable Behaviour/NHM)

An Adélie penguin attempts to drive off a giant petrel. The chicks have gathered for protection while their parents are at sea finding food. The petrel appears smaller than it is because of the perspective, but it is larger than the squawking, flipper-waving Adélie and capable of pecking to death a young penguin. Usually, southern giant petrels act like vultures, feeding on the carcasses of the young. But when carrion is not available, they will pick off any chicks separated from their parents. (Photo by Linc Gasking/Unforgettable Behaviour/NHM) 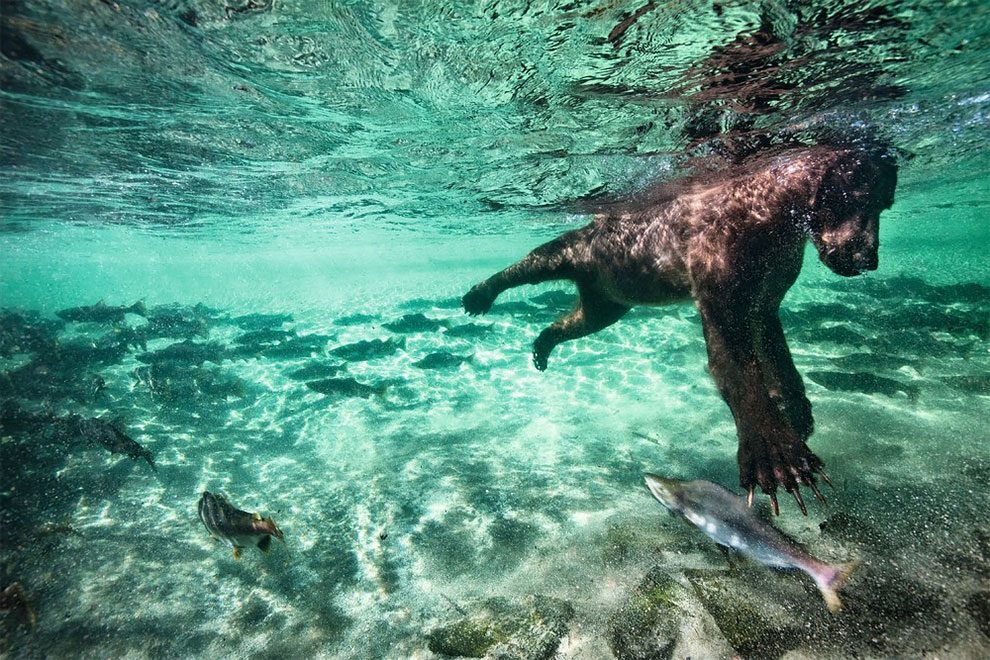 A female grizzly bear fishes for salmon in a pool below rapids. The salmon gather before attempting to leap the rapids and continue upstream to spawn. In late summer, most of the grizzlies in southern Alaska congregate along the rivers to feast on the salmon returning from the Pacific to their natal streams. This female was experienced at fishing, using different techniques, depending on the depth of the water. Here she is swimming above a shoal of chum salmon, trying to scoop them out with her massive paws. (Photo by Paul Souders/Unforgettable Behaviour/NHM) 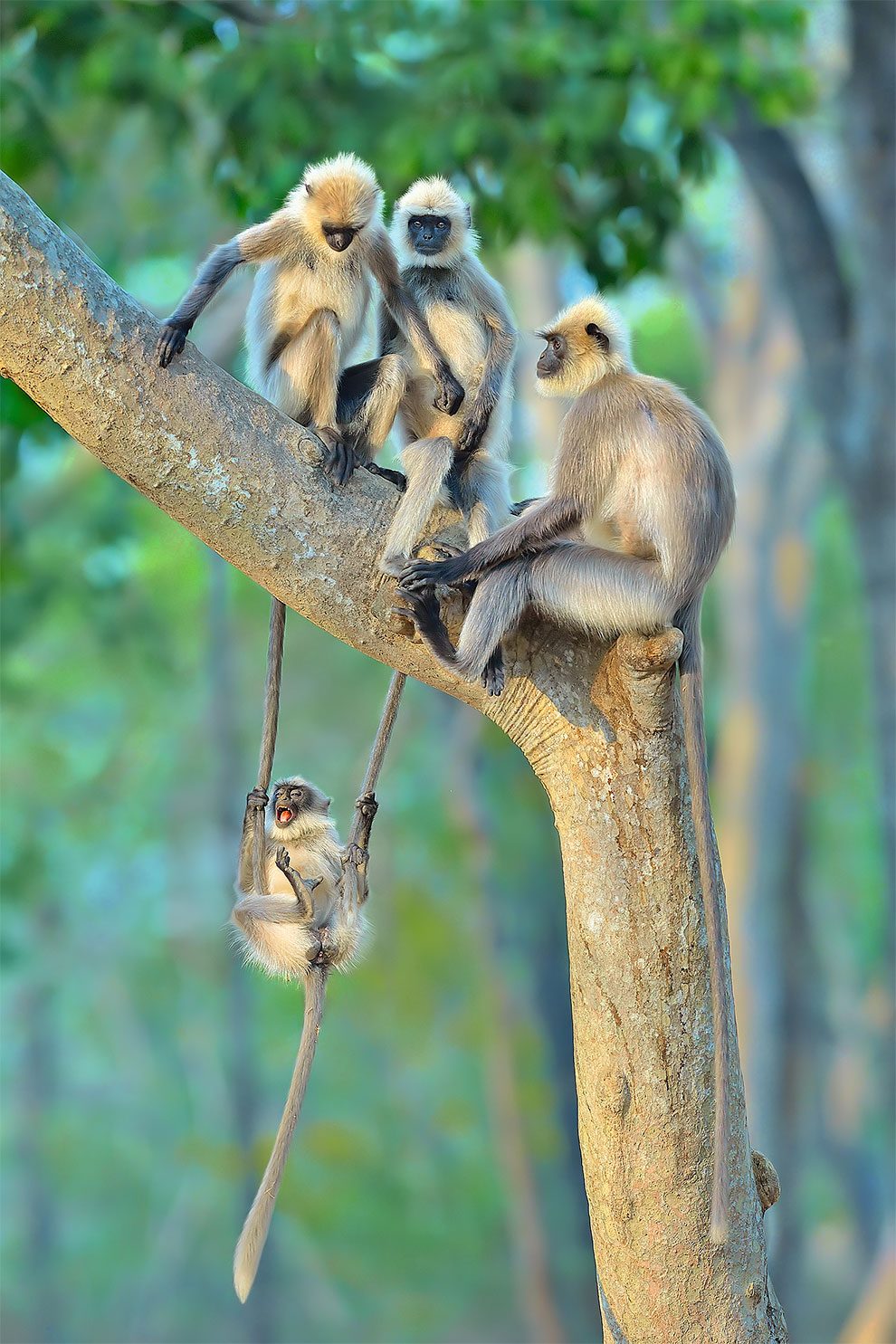 It’s the end of the day and a group of black-footed grey langurs settle into a tree for the night. But this infant has decided it’s playtime. Swinging on the tails of two juveniles, he makes a characteristic play face. His mother takes little notice, and the adolescents tolerate his acrobatics. Langurs are very social and youngsters play as often as they can, which helps develop bone and muscle, and also develops social bonds and communication skills. (Photo by Thomas Vijayan/Unforgettable Behaviour/NHM) 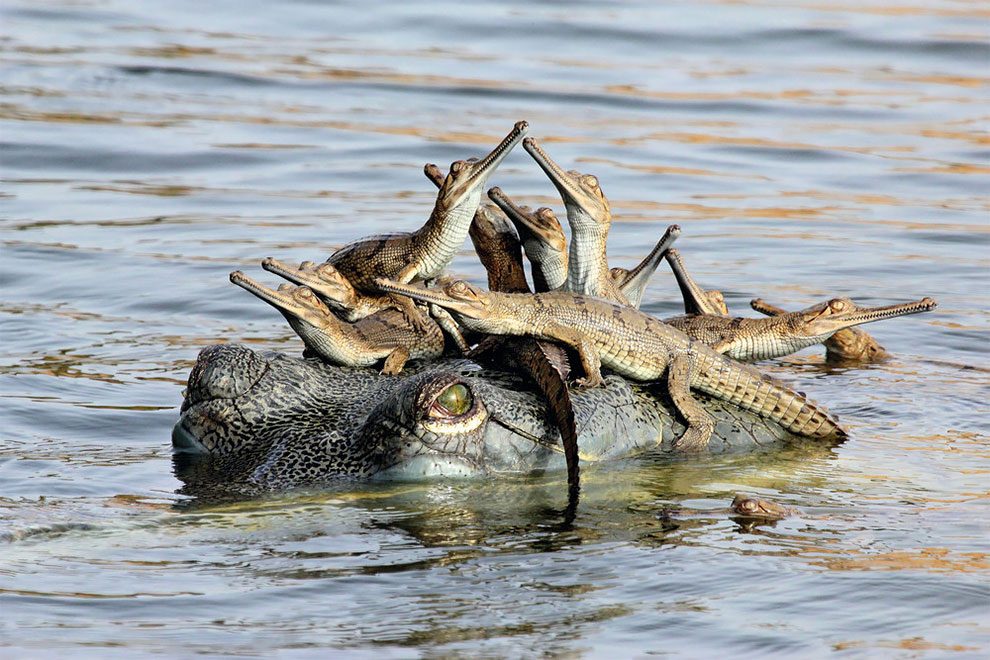 A female gharial hangs out in the water while her babies use her head as a basking perch. She is one of a colony of gharials that have nested at this riverbank site. The mothers keep watch from the river, with the female acting as chief guard for 100 or so hatchlings. Adults will protect the young for at least a month until the monsoon rains arrive and they move down river to feed in deeper water. Gharials are under pressure from illegal sand‑mining in nesting areas, illegal fishing, egg collection and pollution. (Photo by Udayan Rao Pawar/Unforgettable Behaviour/NHM)

Sad Animal Facts Are The Cutest Way To Ruin Your Day
2018 Wildlife Photographer Of The Year: Highly Commended
If Sailor Moon Was Goth
Rare Purple Crab Species Identified in Threatened Palawan Biodiversity
Vintage Photos Capture Springtime In Clarksville, Arkansas In 1953
Artist Painted Endangered Animals For Each Day Of 2019 To Raise People’s Awareness
Guardian Readers' Travel Photography Competition: March 2017
Lifelike Galvanized Wire Animal Sculptures by Kendra Haste
Beautiful Retro Photos Show Unique Women’s Fashion Styles in Hong Kong During the 1990s
Artist Using Photoshop Technique to Manipulate Bizarre Christmas Photos With Her Beloved Dog
Before The Great Clean-Up Began, Here Is Another Side Of New York In The 1970s That You May Never Know
From Australia With Love – Beauty Photography By Chris Dwyer
Photographer Ludgero Filipe
Photographer Yann Philippe Captures The Beauty Of Madrid In Fantastic Infrared
The Orphans Of Mother Russia: An Intimate Look At The Daily Life In The Ancient City Of Pskov
China 2050: The Future Of China According To A Photographer Benoit Cezard
These Photos Were Made By Spinning The Camera While Shooting
Vintage Men's Magazine: Cool Pics Of Cavalier's Beauties During The 1960s
Kids at Home and at Play by Tim MacPherson
Sensual Fine-Art Portrait Photography By Berta Vicente
Black and White Photos Show the ’80s Street Fashion Styles of Young People
The Shortlist For The Coveted Bird Photographer Of The Year 2018 Awards Has Been Announced
"Human Obsessed": The Visual Storytelling of Rafael Avcioglu
A Photographer Combines Portraits Of Family Members To Prove How Amazing Our Genes Are
animal, behaviour, photographer, unforgettable, wildlife