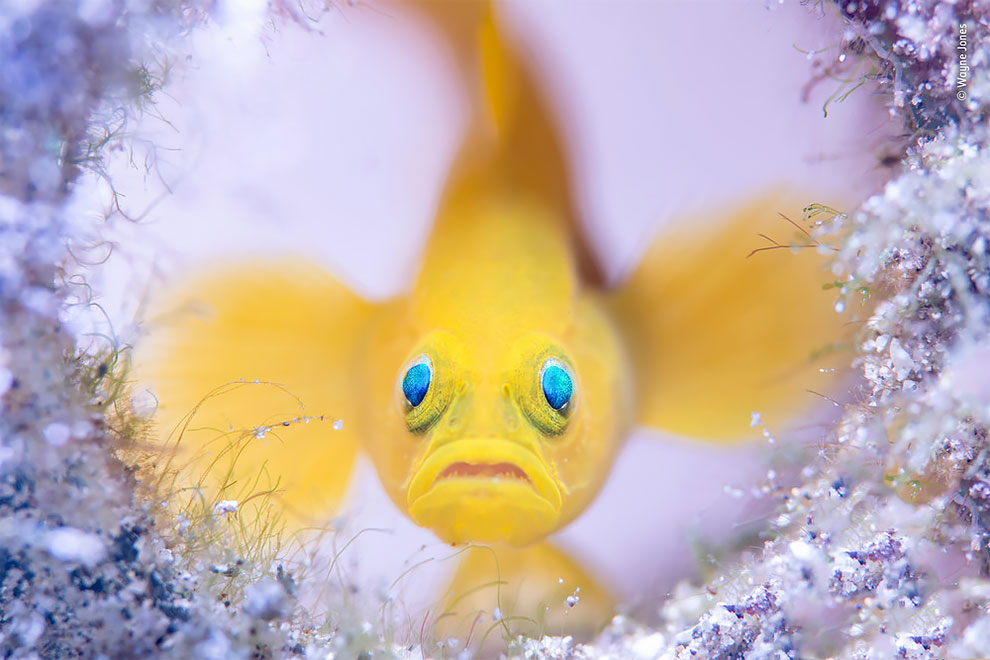 Glass-house guard by Wayne Jones, Australia. Highly commended, Underwater. “On the sandy seabed off the coast of Mabini in the Philippines, a yellow pygmy goby guards its home – a discarded glass bottle. It is one of a pair, each no more than 4 centimetres (one and a half inches) long, that have chosen a bottle as a perfect temporary home. The female will lay several batches of eggs, while the male performs guard duty at the entrance”. (Photo by Wayne Jones/2018 Wildlife Photographer of the Year) 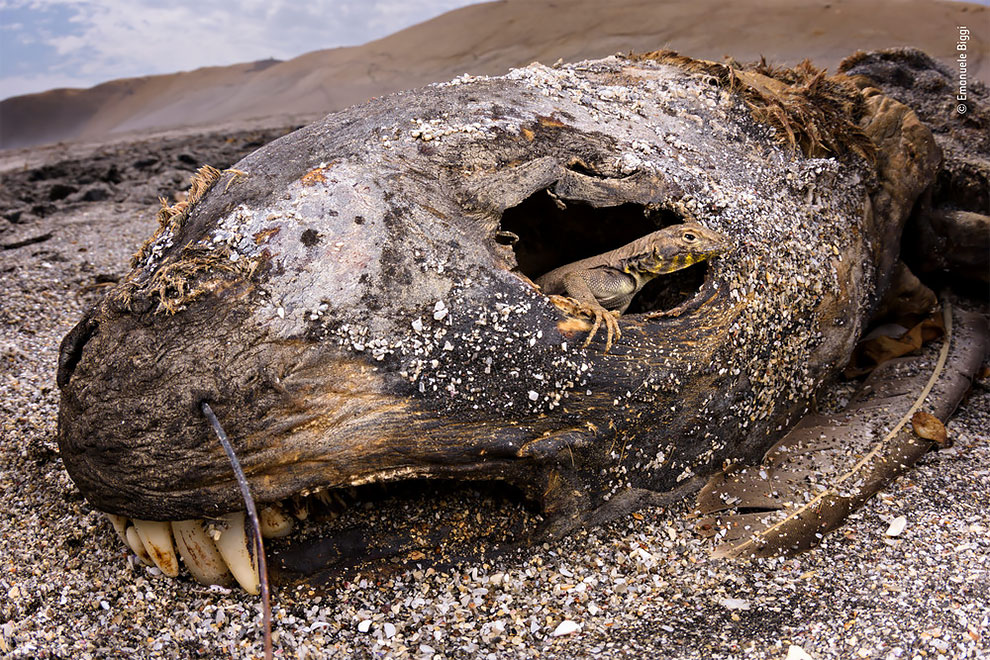 Eye to eye by Emanuele Biggi, Italy. Highly commended, Animals in their environment. “Fed by the sea, the desert coast of Peru’s Paracas National Reserve teems with life. A colony of South American sea lions supplies the corpses. The decaying flesh sustains insects and crustaceans, in turn drawing larger predators. A young male Peru Pacific iguana (distinctive black chevrons on its throat) had joined the feast within, sheltered from the harsh sun and wind”. (Photo by Emanuele Biggi/2018 Wildlife Photographer of the Year) 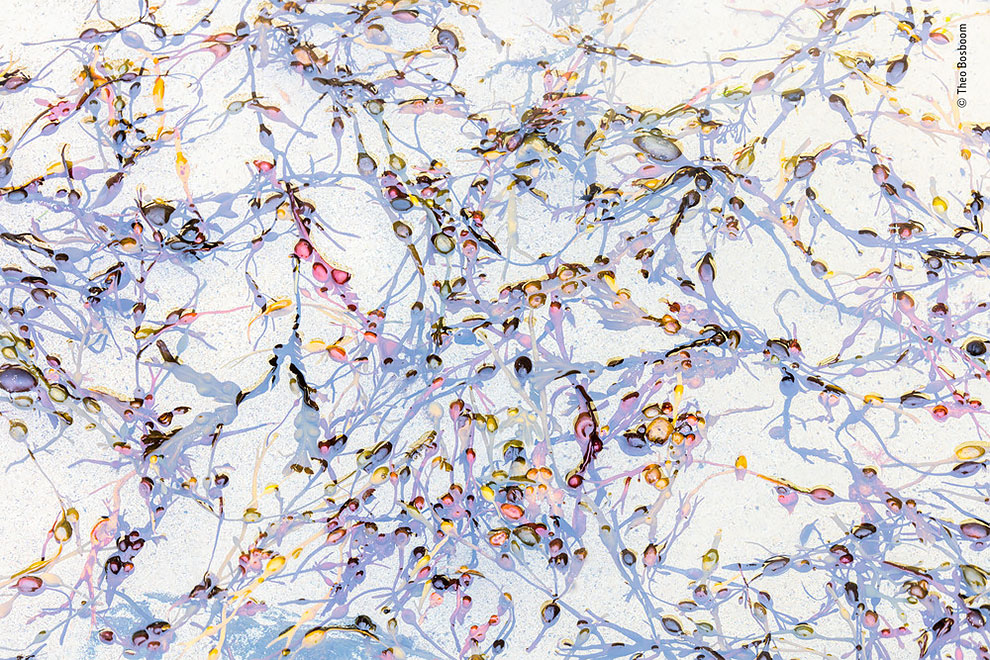 Simple beauty by Theo Bosboom, The Netherlands. Highly commended, Creative Visions. “In a shallow tidal pool, a colourful cluster of detached fronds of egg wrack and bladder wrack form an abstract pattern against white sand. They have been washed off the rocks surrounding Mangersta Sands, on the Isle of Lewis in Scotland’s Outer Hebrides. The air-filled bladders of these marine algae keep their fronds floating and exposed to light so they can photosynthesise”. (Photo by Theo Bosboom/2018 Wildlife Photographer of the Year) 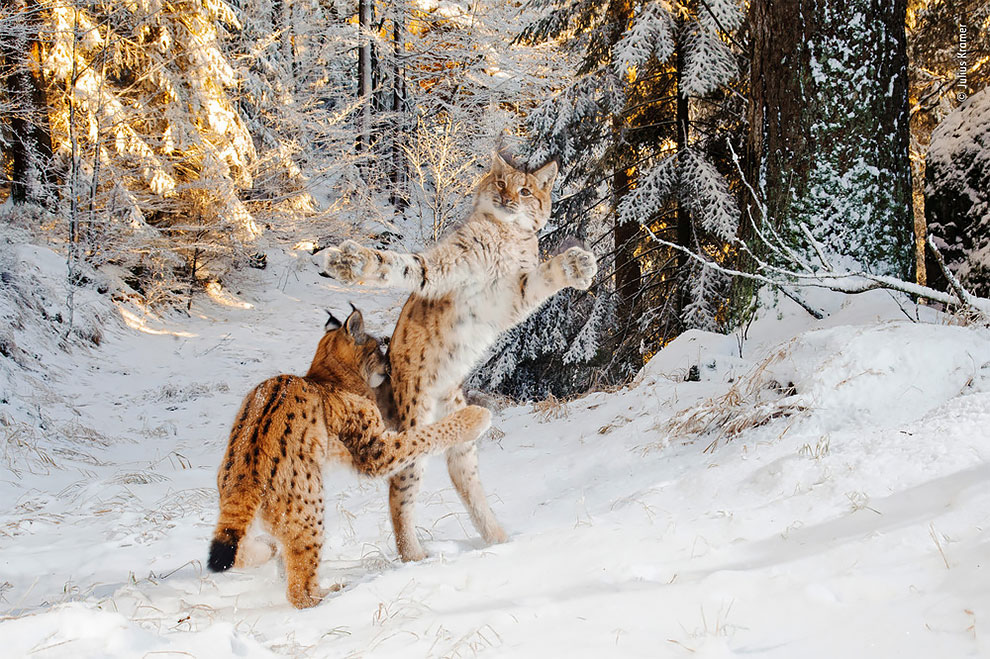 Kitten combat by Julius Kramer, Germany. Highly commended, Behaviour: Mammals. “Like many solitary wildcats, the males have expansive home ranges, within which one or more females live. Most active at dawn and dusk, they are powerfully built, with slightly longer hindlimbs for pouncing on prey. They hunt mainly herbivores, such as deer, which brings them into conflict with hunters”. (Photo by Julius Kramer/2018 Wildlife Photographer of the Year) 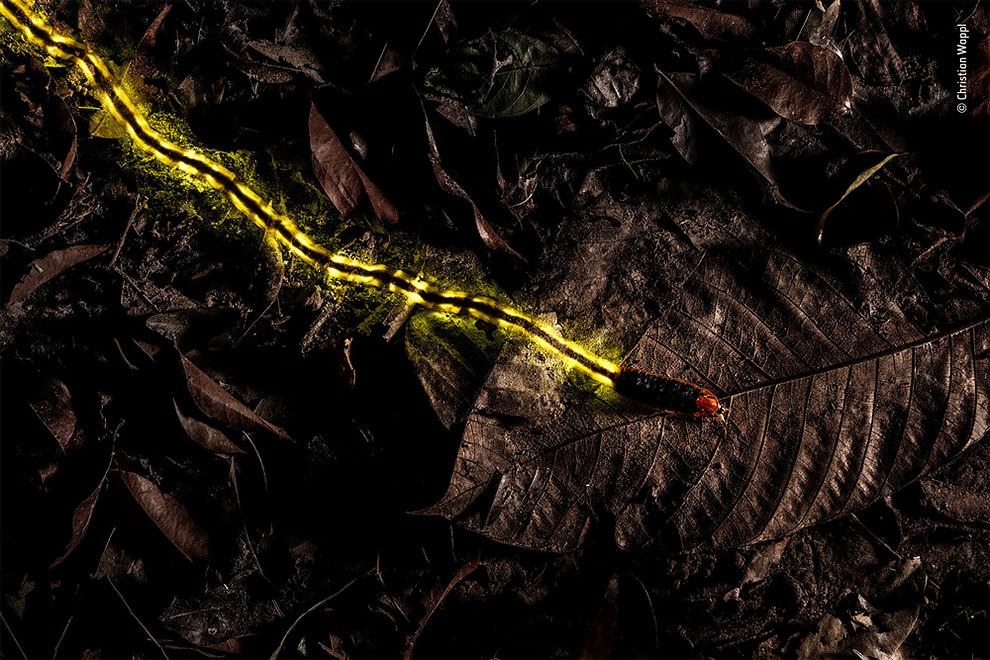 Trailblazer by Christian Wappl, Austria. Highly commended, Behaviour: Invertebrates. “A large firefly larva, about 8 centimetres (more than 3 inches) long, emitting continuous glow from four light organs at its rear. Fireflies spend most of their lives as larvae, feeding mainly on slugs and snails. This one can even tackle invasive African land snails many times its own size. Its glow – the result of a chemical reaction in its light organs – is most likely a warning to predators that it is unpalatable (whereas, the flashing lights of adult fireflies are for courtship)”. (Photo by Christian Wappl/2018 Wildlife Photographer of the Year) 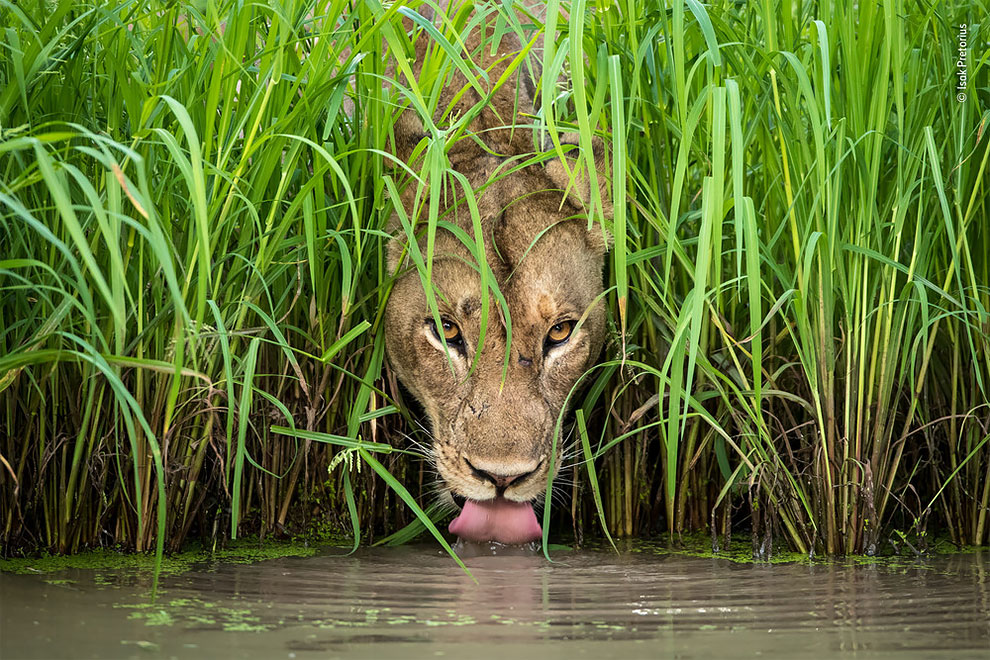 Cool cat by Isak Pretorius, South Africa. Highly commended, Animal Portraits. “A lioness drinks from a waterhole in Zambia’s South Luangwa National Park. She is one of the Mfuwe Lodge pride – two males, five females and five cubs. Lions kill more than 95 per cent of their prey at night and may spend 18–20 hours resting”. (Photo by Isak Pretorius/2018 Wildlife Photographer of the Year) 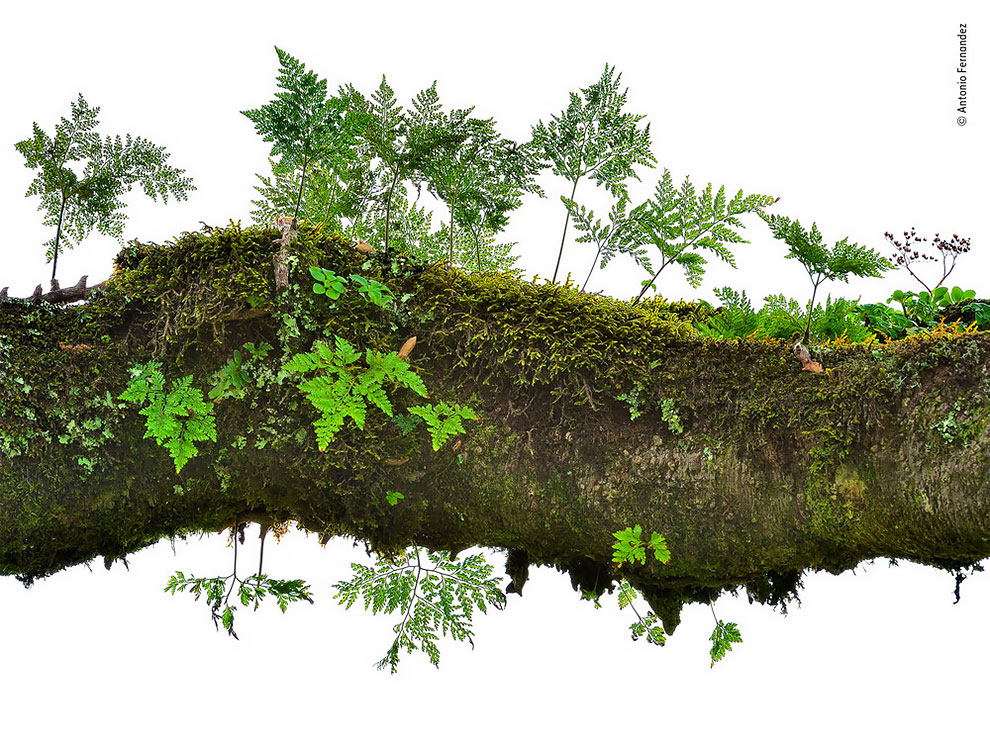 Forest on a tree by Antonio Fernandez, Spain. Highly commended, Plants and Fungi. “The arms of immense trees stretched eerily into the mist permeating Madeira’s Fanal Forest. Among them was this low tilo branch with ferns growing all along it, “like a forest within a forest”. The hare’s foot fern, with broad, finely-divided fronds, occurs in the western Mediterranean, Canary Islands and Madeira. Like other epiphytes (plants that grow on other plants), it garners water and nutrients from the air, rain or plant debris and relies on the host plant for support”. (Photo by Antonio Fernandez/2018 Wildlife Photographer of the Year) 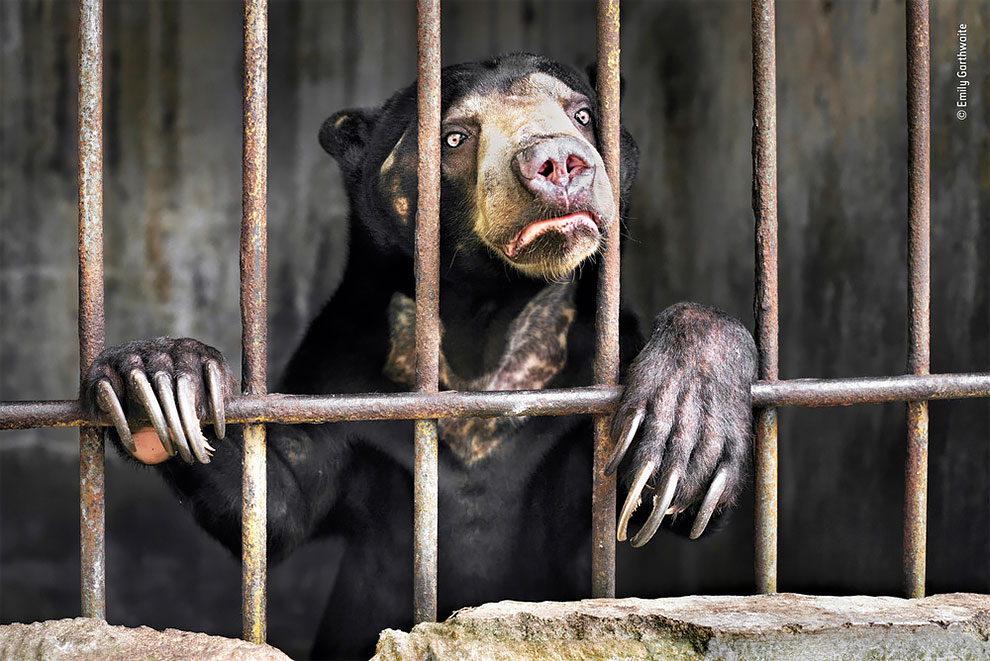 Witness by Emily Garthwaite, UK. Highly commended, Wildlife Photojournalist Award: Single Image. “One of several sun bears kept behind the scenes at a zoo in Sumatra, Indonesia, in appalling conditions. Sun bears are the world’s smallest bears, now critically endangered. In the lowland forests of Southeast Asia, they spend much of their time in trees, eating fruit and small animals, using their claws to prise open rotten wood in search of grubs. They are threatened by rampant deforestation and the demand for their bile and organs for traditional Chinese medicine”. (Photo by Emily Garthwaite/2018 Wildlife Photographer of the Year) 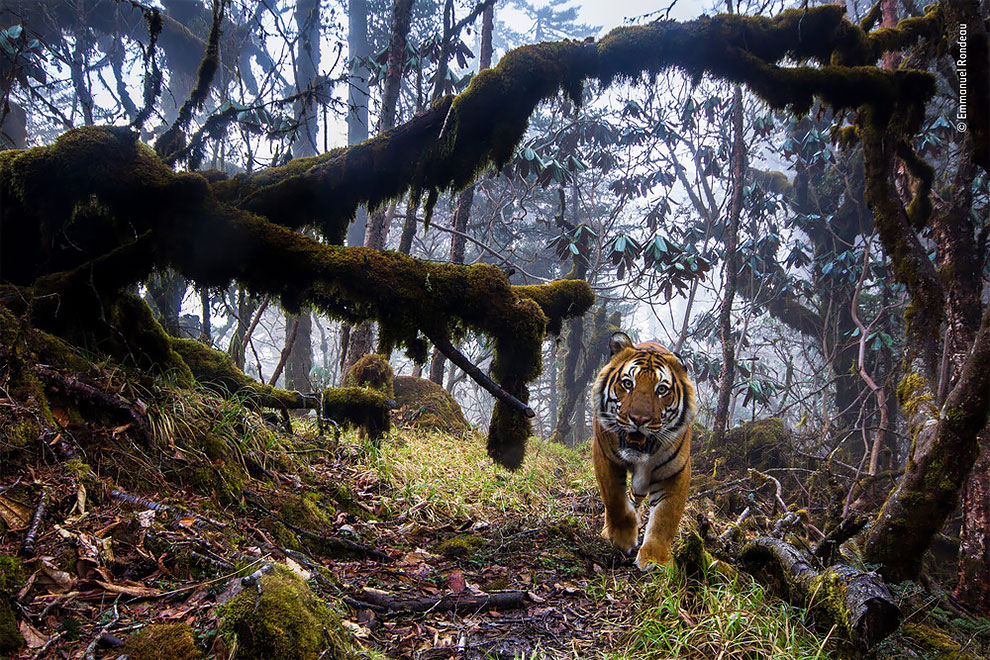 Tigerland by Emmanuel Rondeau, France. Highly commended, Animals in their environment. “In a remote forest, high in the Himalayas of central Bhutan, a Bengal tiger fixes his gaze on the camera. The path he treads is part of a network linking the country’s national parks – corridors that are key to the conservation of this endangered subspecies but unprotected from logging and poaching”. (Photo by Emmanuel Rondeau/2014 Wildlife Photographer of the Year) 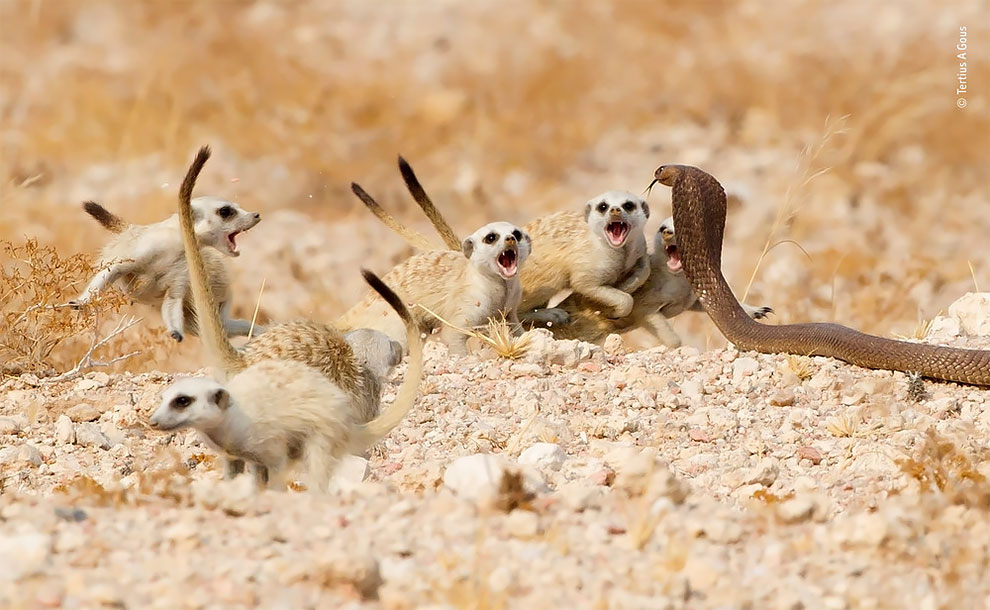 The meerkat mob by Tertius A. Gous, South Africa. Highly commended, Behaviour: Mammals. “When an Anchieta’s cobra reared its head and moved towards two meerkat pups near their warren on Namibia’s Brandberg Mountain, the rest of the pack – foraging nearby – reacted almost instantly. Rushing back, the group split into two: one group grabbed the pups and huddled a safe distance away, the other took on the snake. Tails raised, the mob edged forwards, growling. When the snake lunged, they sprang back. This was repeated over and over for about 10 minutes. Finally, the cobra gave up and disappeared”. (Photo by Tertius A. Gous/2018 Wildlife Photographer of the Year) 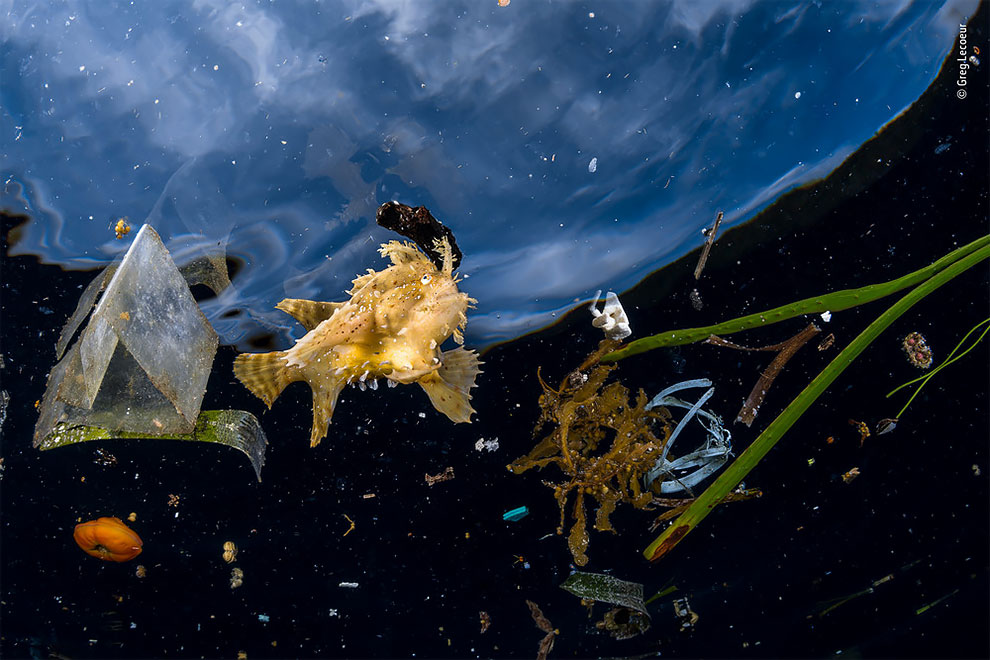 Life among litter by Greg Lecoeur, France. Highly commended, Wildlife Photojournalist Award: Single Image. “This Sargassumfish couldn’t hide among the litter. The nearby frond of Sargassum seaweed was a far cry from the free-floating rafts of the seaweed that more normally shelter this frogfish and many other specialised species on the biodiverse reefs of the Indonesian archipelago of Raja Ampat. A master of camouflage and an ambush predator, the Sargassumfish stalks its prey on claw-like fins through the fronds of these floating islands, concealed by its tan colour and feathery outline”. (Photo by Greg Lecoeur/2018 Wildlife Photographer of the Year) 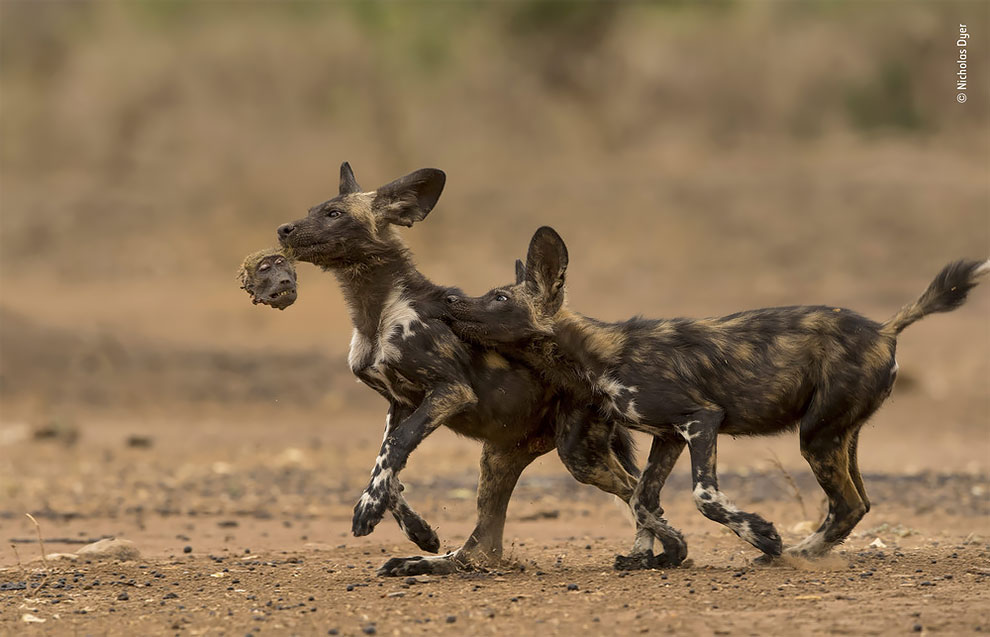 Ahead in the game by Nicholas Dyer, UK. Highly commended, Behaviour: Mammals. “A pair of African wild dog pups play a macabre game of tag with the head of a chacma baboon – the remains of their breakfast. The endangered African wild dog (aka the painted hunting dog) is best known for hunting antelopes, such as impalas and kudus. But over the past five years, in Mana Pools National Park, northern Zimbabwe, three different packs have regularly killed and eaten baboons – highly unusual, not least because baboons are capable of inflicting severe wounds”. (Photo by Nicholas Dyer/2018 Wildlife Photographer of the Year) 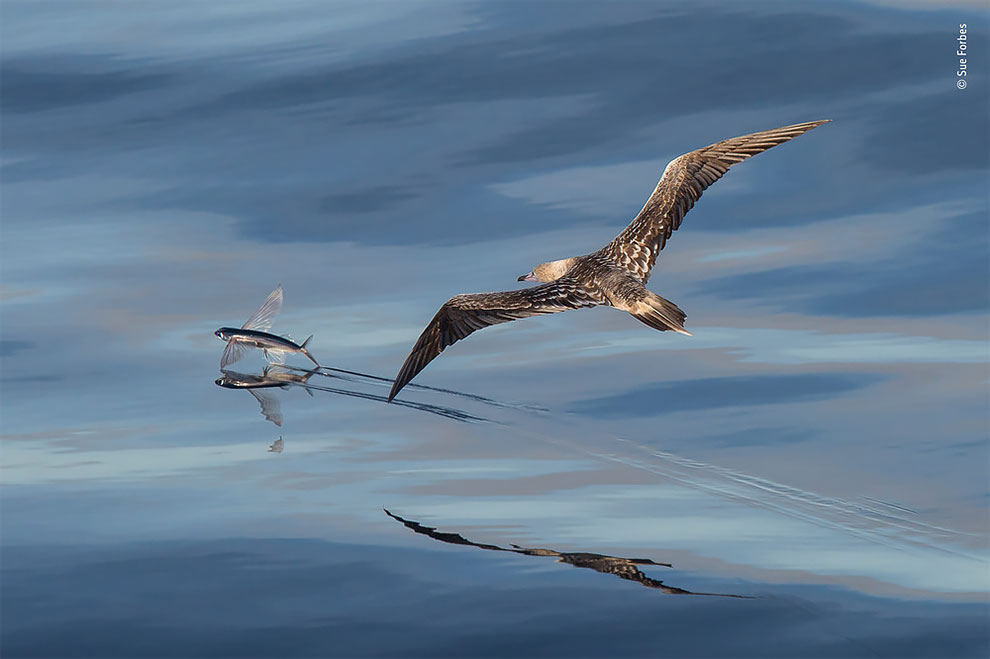 Flight by Sue Forbes, UK. Highly commended, Behaviour: Birds. “A single juvenile red-footed booby, circling northeast of D’Arros Island in the Outer Islands of the Seychelles. These ocean‑going birds – the smallest booby species, with a metre-wide (3-foot) wingspan – spend most of their time at sea, flying long distances with ease. Sharp-eyed, they swoop down to seize prey, mainly squid and flying fish. Their bodies are streamlined for plunge‑diving – nostrils closed and wings pinned back – and nimble enough to grab flying fish in mid-air”. (Photo by Sue Forbes/2018 Wildlife Photographer of the Year) 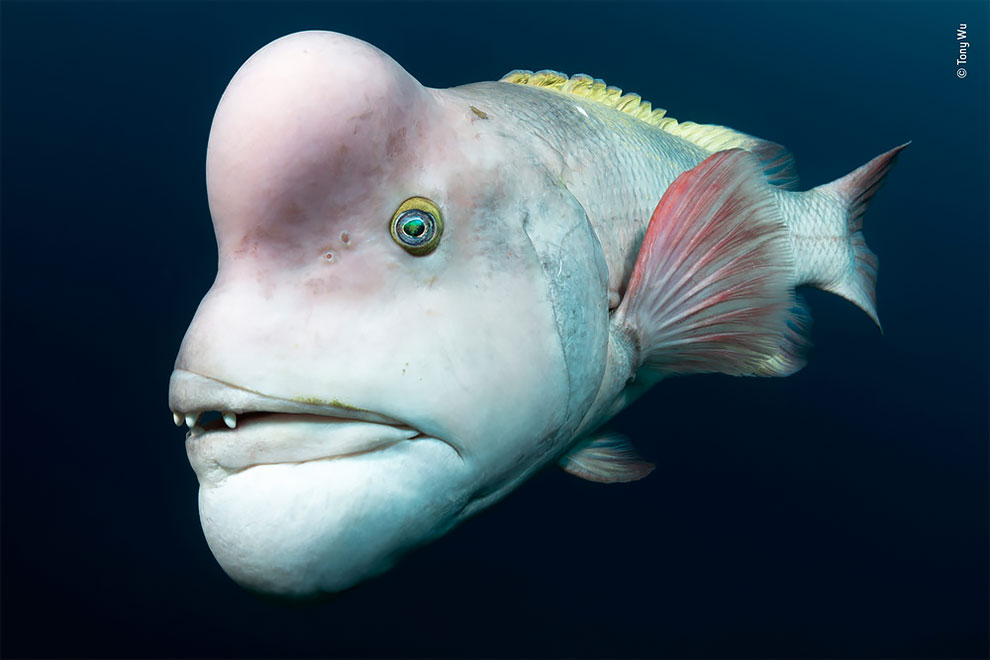 Looking for love by Tony Wu, USA. Highly commended, Animal Portraits. “Accentuating his mature appearance with pastel colours, protruding lips and an outstanding pink forehead, this Asian sheepshead wrasse sets out to impress females and see off rivals, which he will head-butt and bite, near Japan’s remote Sado Island. Individuals start out as females, and when they reach a certain age and size – up to a metre (more than 3 feet) long – can transform into males. Long-lived and slow-growing, the species is intrinsically vulnerable to overfishing”. (Photo by Tony Wu/2018 Wildlife Photographer of the Year)

A Photographer Took Stunning Portraits Of Beautiful Women With Their Eyes Shut
This Cat Is A First-Rate First Mate
How this Man's Saved a Duckling
Paws For Thought With Kitty Yoga Classes At Australian Cat Cafe
Adorable Moment Baby Bear Cubs Grasp Paws and Dance Joyfully in a Circle
Seal Pup Season in England
Photographer Tossed Powder On Some Dogs, And The Result Turned Out Amazing
This Company Is Making Leggings For Dogs To Keep Their Paws Warm
Photographer Risks Life For Breathtaking Images Of New York City Subway Tracks
A Thrill-Seeking Photographer Risked Life And Limb As He Swam Alongside A Ten-Foot-Long American Crocodile Near Belize
Amazing Vintage Photographs Of Cat's Meat Sellers In London In The Early 20th Century
UK Landscape Photographer Of The Year Awards
The Rehoming and Rehabilitation of Unwanted Dogs and Cats During the Christmas Holiday
Malaysian Monkey Lifestyle
Giant Pandas in Beijing Zoo
Cat Fishing: Leopard Gets Covered In Mud Catching Its Fish Supper
Photographer Captures Women Reaching The Highest Point Of Physical Pleasure
Flash-Frozen Fish in Norway
The Best Animal Images Of The Decade From The British Wildlife Photography Awards
The Art of the National Parks: Beautiful Posters Celebrating Famous US Parks
Japanese Art Student’s Graduation Project Is A Lineup Of Cats Adorably Asking You For High Fives
When Dozens Of Whales Arrived In Small Newfoundland Town, This Photographer Took Out A Drone To Take These Aerial Pics
Artists Create Elaborately Detailed Miniature Worlds For Their Snails
"I Vomited": Proud Cats Who Voted In US Election 2020
commended, highly, photographer, wildlife