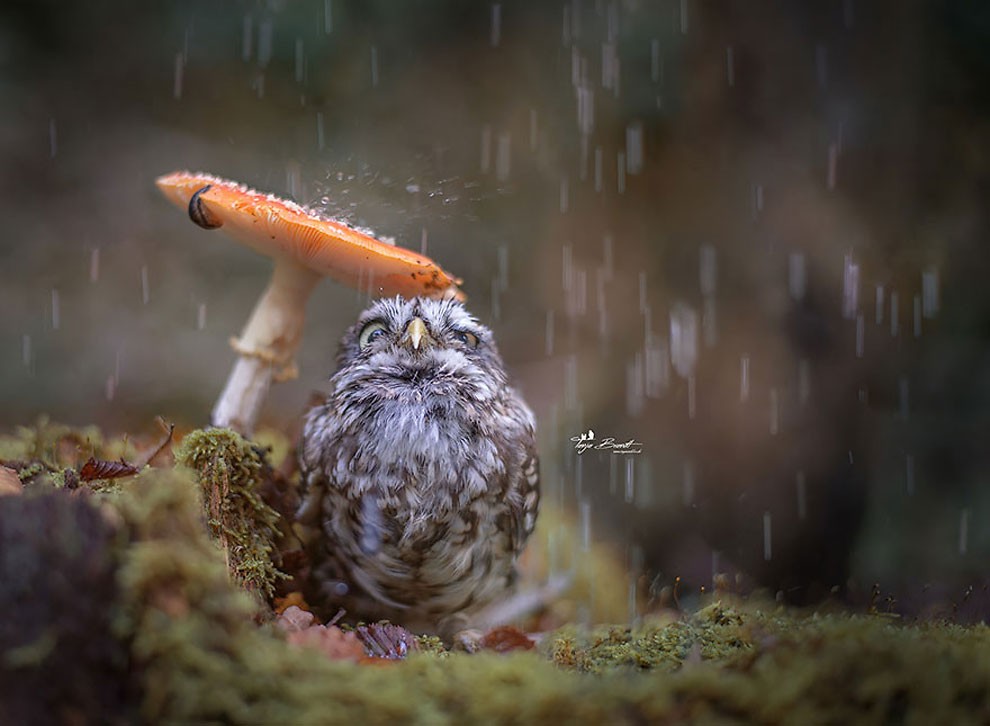 Photographer Tanja Brandt‘s pet owl may not be a fan of rainstorms, but rain or shine he knows how to strike the perfect pose for the camera. During one of the artist’s many outdoor adventures, it began to drizzle and her beloved 1.5-year-old owl Poldi took cover underneath an orange mushroom. At that exact moment, Brandt was ready with her camera and captured this adorably candid moment, made especially precious given Poldi’s petite size. 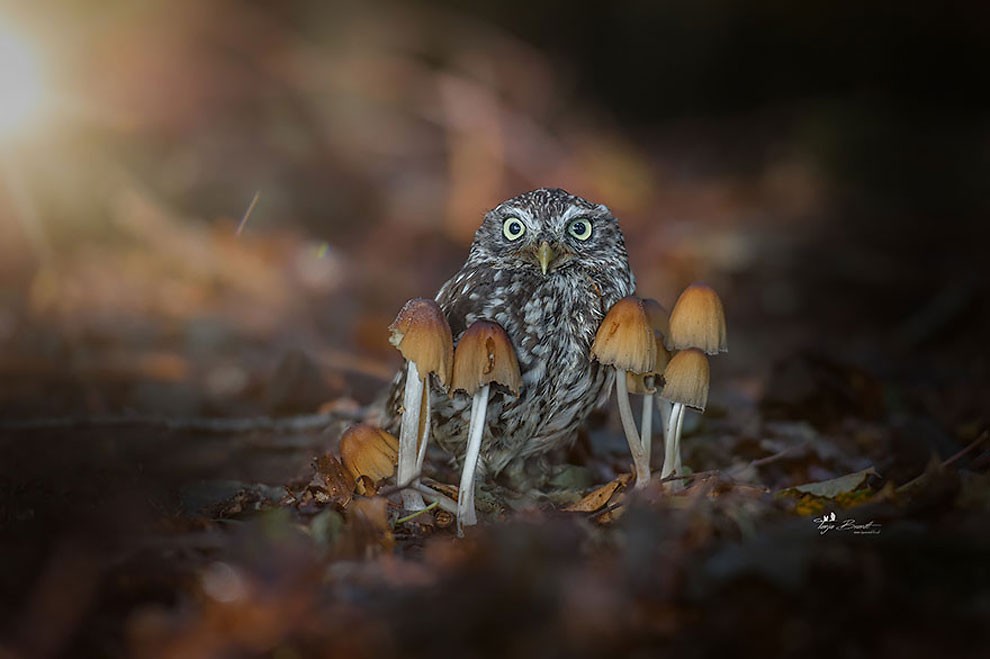 “I got him when he was five months old. He didn’t want to come out [of] his egg and he was very small, the smallest,” the photographer told Bored Panda. “His six sisters were all hatched, and as he was the last to be born, days after the others, he was very small.” 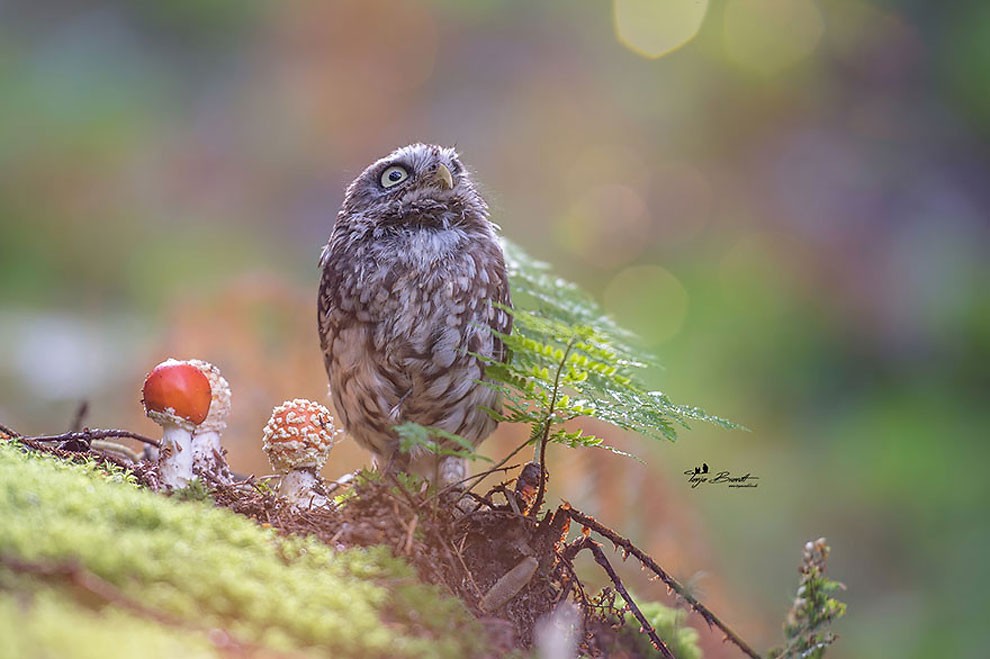 Besides his six sisters, the photogenic bird is accompanied by a Harris Hawk named Phönix, a Weissgesichtseule [white-faced owl] named Gandalf, a snow owl named Uschi, and a dog who loves to snuggle with the Poldi. 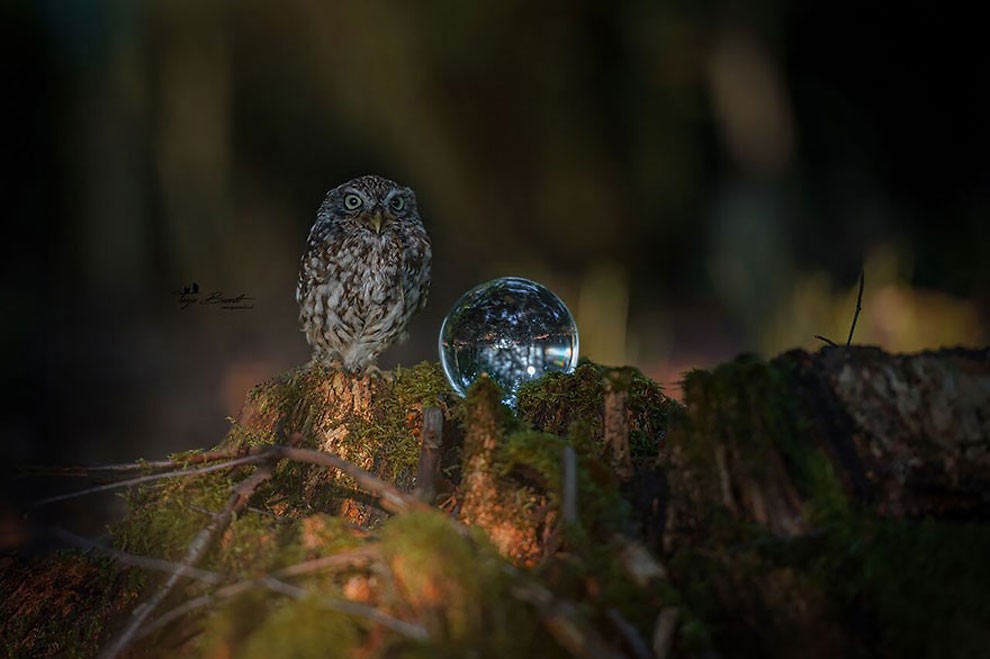 As a clear animal lover, Brandt says, “I am always outside with my camera and with my animals. So we get to walk together, have fun, go on adventures, have little breaks… We take some pictures and after the animals can play again as we keep going. I know my animals very well and I can see their state of mind. If I go out with just one of my animals, the others get antsy and want to be with us. We have lot of fun together.” 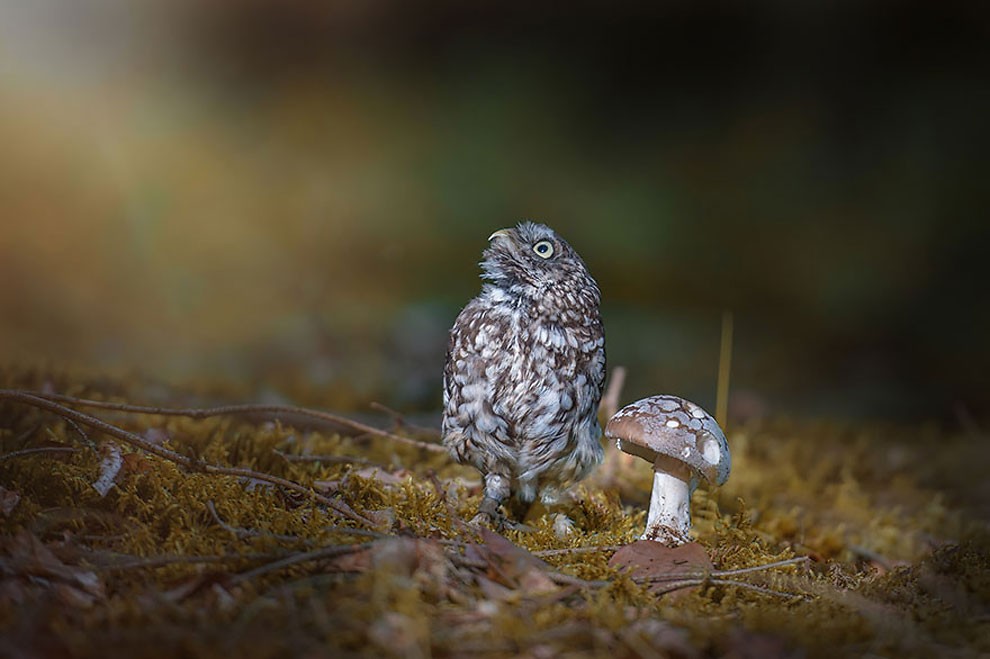 Brandt adds, “I love the beauty, power, loyalty, courage and friendship of animals. Many people could learn from them.” 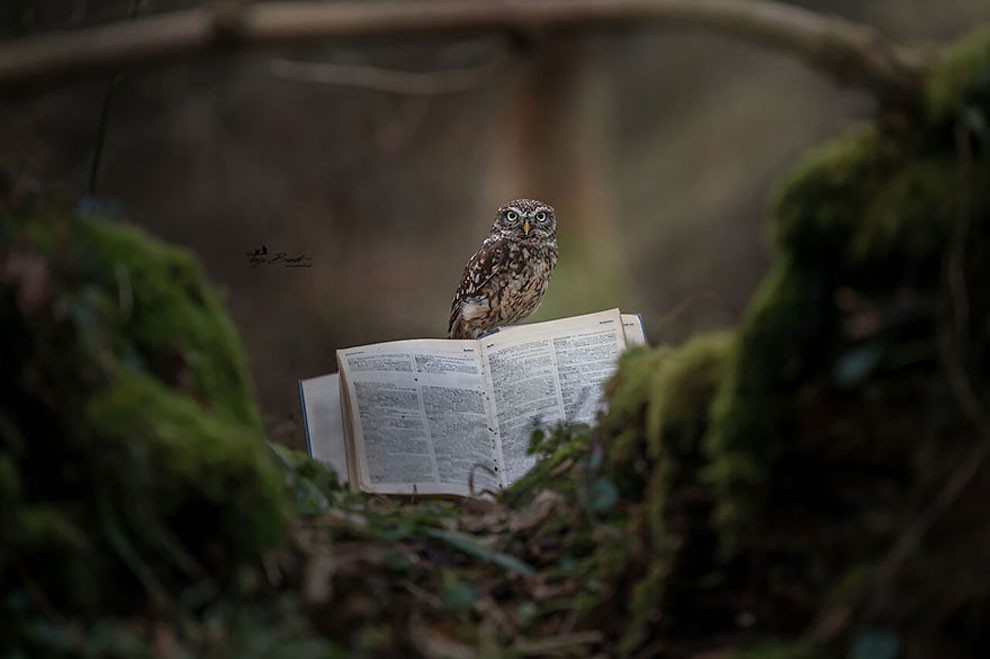 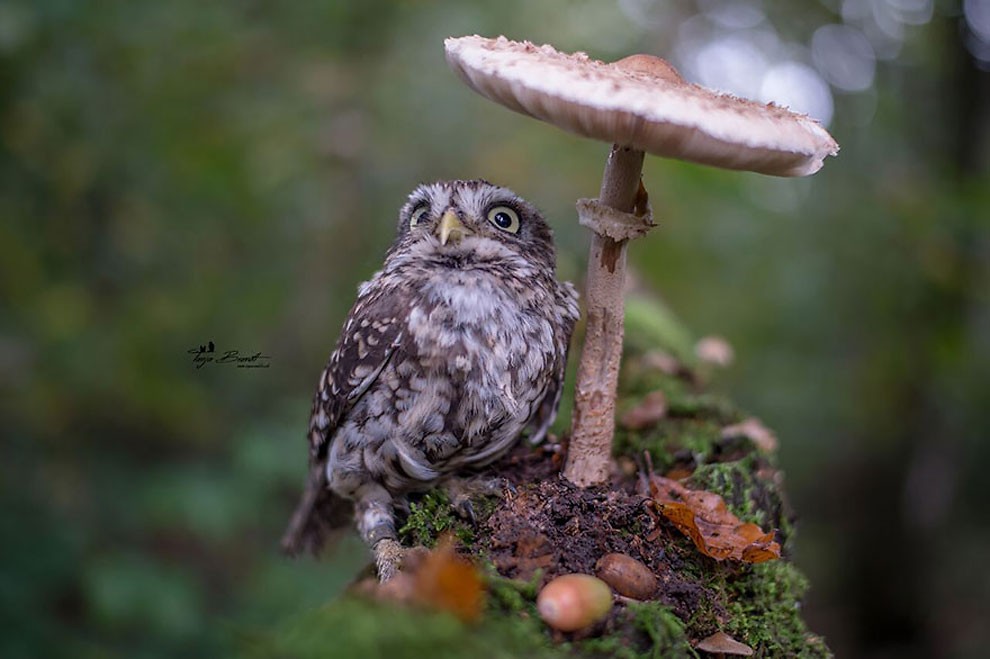 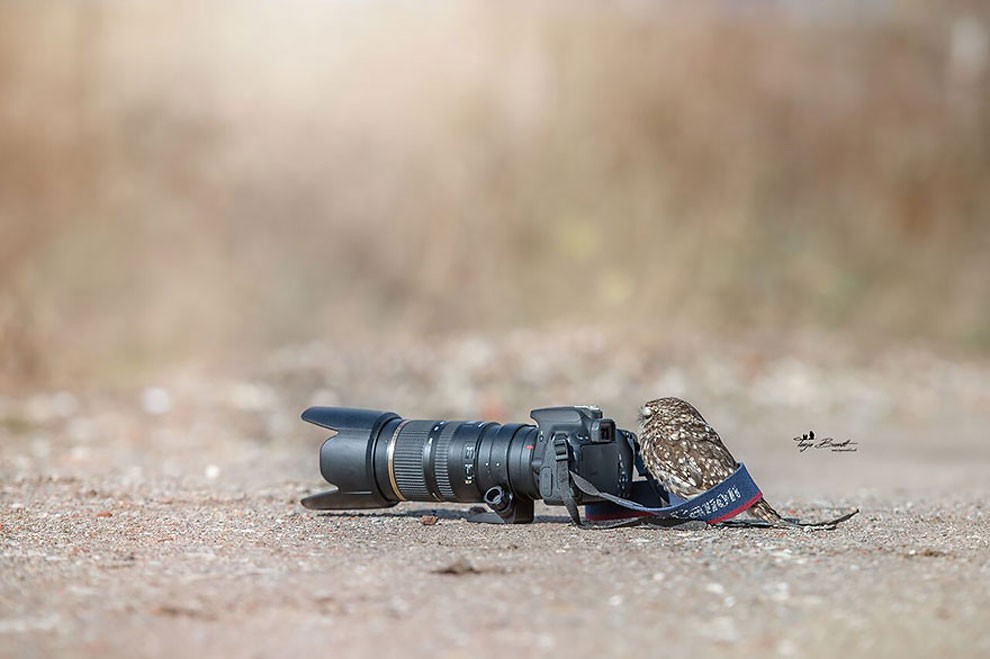 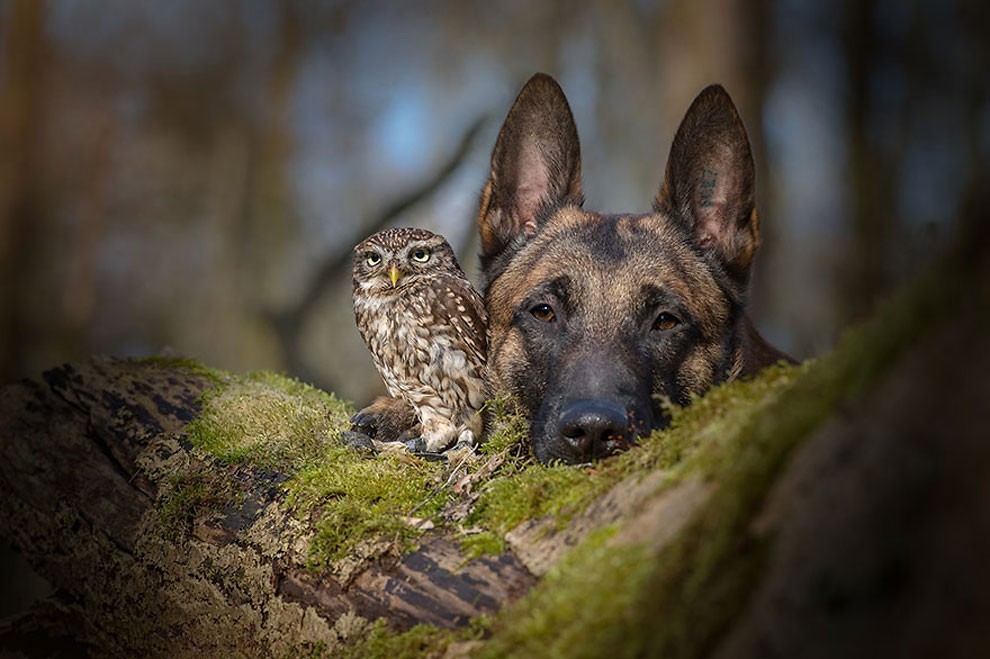 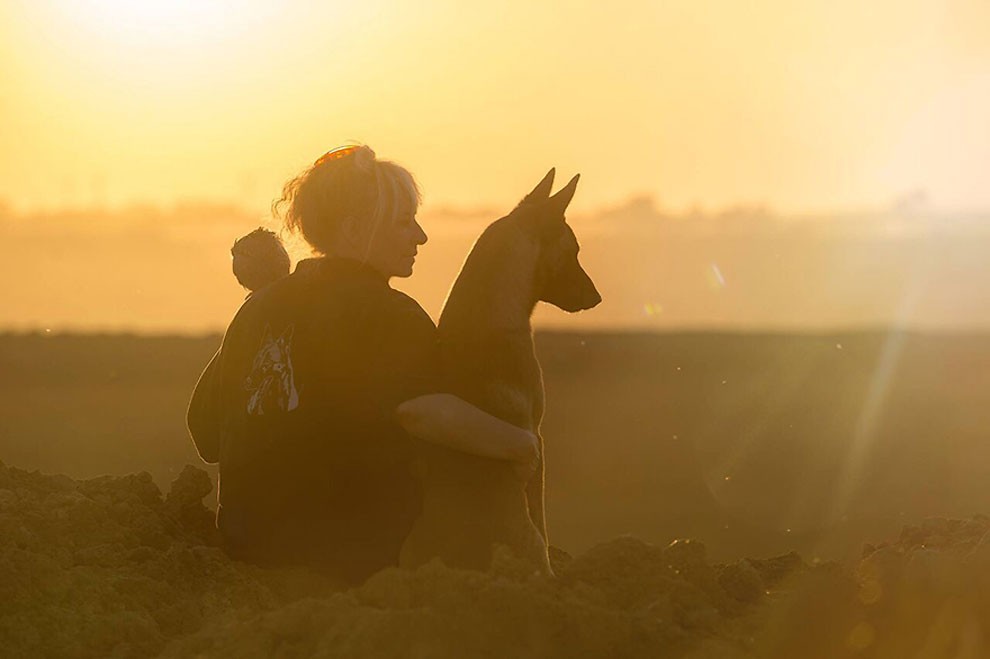 Via My Modern Met, Bored Panda

Wildscreen Photography Festival 2014
26 Proofs That Love Is In The Little Things
Daredevil Photographer Recreates Iconic "Jaws" Movie Poster
This Man And His Cat Recreate Famous Movie Scenes And It's Amazing!
A Photographic Project On The Beauty And Connections Between Animals And Humans
Pigasso: This Pig Enjoys Painting And Has Become The World’s First Pig Artist
Deep Sea ‘Aliens’ That Live In Twilight Zone Below The Ocean Captured In Incredible Pictures
The Secret Life Of Hamsters And Hedgehogs: Humorous Photos Of The House Pets By Elena Eremina
Humpback Whale Close Encounter Off California Coast
This Cat Looks Like A Pirate, But That Just Makes His Mom Love Him Even More!
Ten Cats Who Were Painted By Nature Itself
The Last Of The Kings: Very Sad Photos Of The Hard Life Of Congolese Gorillas
Japanese Art Student’s Graduation Project Is A Lineup Of Cats Adorably Asking You For High Fives
The Urban Herons Of Amsterdam
Seal Pup Season in England
19-Year-Old Black Cat Turns Into A “Nordic God” Due To A Rare Skin Condition
Crazy (Cool) Cat Men: Ridiculous Studio Photos Of Men Posing With Their Beloved Cats
People Spend Quarantine by Making Tiny Crochet Couches For Their Cats
Pink Champagne Fox Miko
An Artist Created A Needle-Felt Realistic Sculptures Inspired By Real Animals
This Dog Has A Wheelchair Made Out Of Children’s Toys
Finally, 2023 Cats On Catnip Calendar Is Here!
Sweet Pony - Rocking Cookie Cutter
GPS Trackers That Show Cats' Activity During The Night
during, little, mushroom, sudden, sweet, umbrella

Funny Greeting Cards Featuring The Thoughts Of An Angry Cat
Adorable Lambs At Korean Sheep Cafe Are Anything But Baaaaashful!
Fearless Genius: The Digital Revolution In Silicon Valley 1985-2000 In Photographs By Doug Menuez
Spangles, the Cross-Eyed Cat
Woman Put A Water Fountain With A Camera In Her Yard, Here Are Stunning Photos Of Regular Visitors
Heartwarming Photographs Capture The Bond Between Homeless People & Their Pets
Meet Watson, Kiko, And Harry, Three Best Friends Taking Over Instagram With Their Adorable Pics
Photographer Takes Photos Of Cats High On Catnip, And The Results Are Brilliant
A Black Cat Interrupted A Football Match And Unsurprisingly Refused To Leave
Cute "Little Monk" in SE China Goes Viral Online
2007 ‒ 2023 by Design You Trust. Proudly hosted by WebHostingBuzz.
Privacy Policy · Terms of Service · Content Removal Policy ❤️ 🇺🇦