Vintage Photos From Between The 1940s And 1970s Show How Glamorous Flying Used To Be! 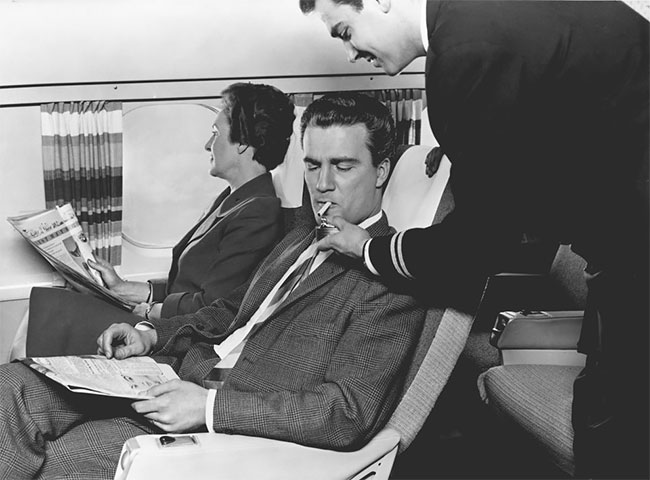 Although flying today is cheaper, safer, and faster than it’s ever been, it’s becoming an increasingly unpleasant experience as airlines cram more passengers into planes, causing overcrowding and delays. It’s enough to make travelers wish for the golden age of aviation. Here are some vintage photos from 1946 to 1970, sourced from Iberia, KLM, Delta, British Airways and Air France, that show just how glamorous flying used to be.

Above: We’re grateful that smoking is no longer permitted on planes, but we can’t deny this guy’s got style. (Courtesy of KLM)

With today’s lie-flat beds in first and business class, not all that much has changed since 1949 on a KLM flight. (Courtesy of KLM) 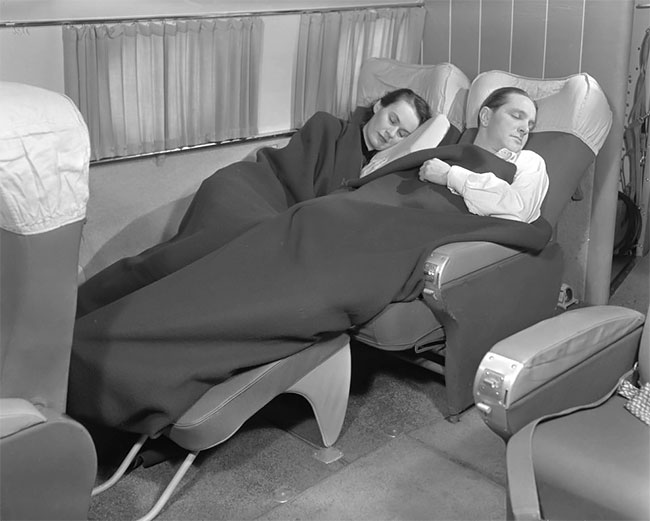 Seats on Delta have definitely shrunk since 1959. (Courtesy of the Delta Flight Museum) 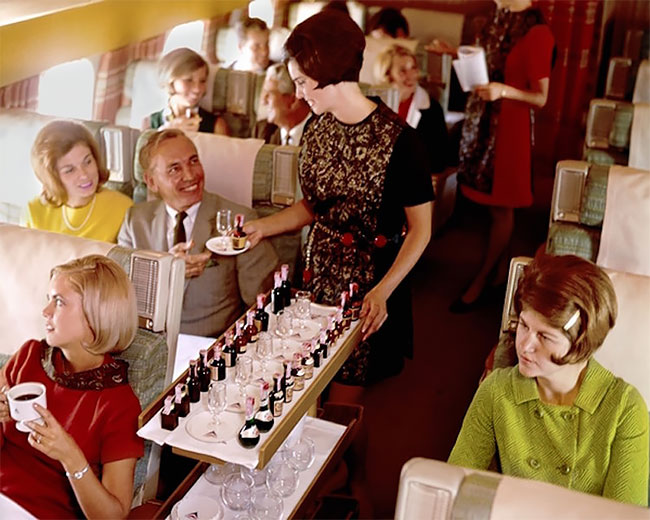 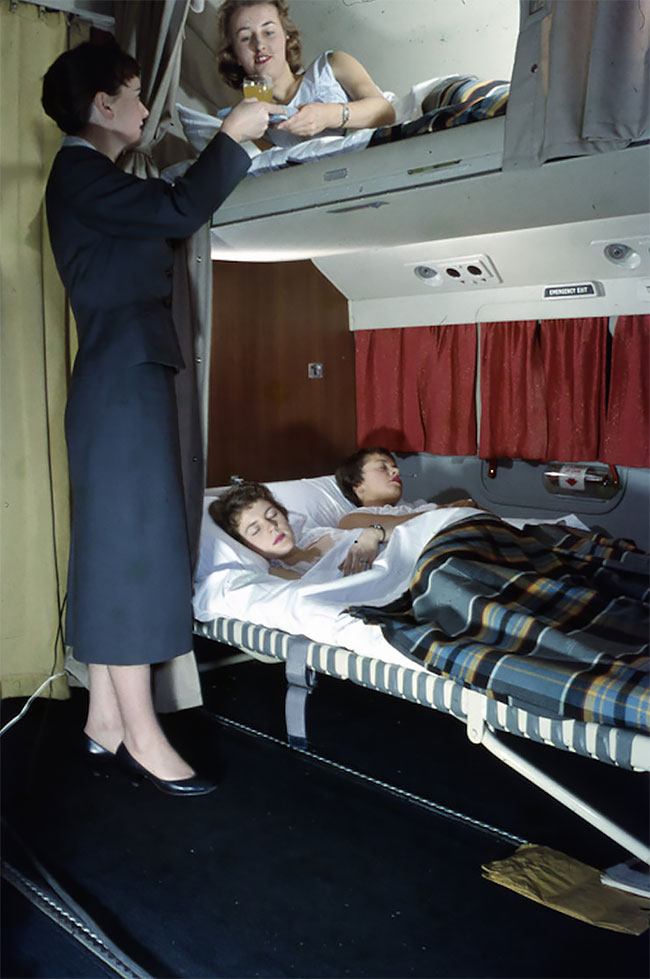 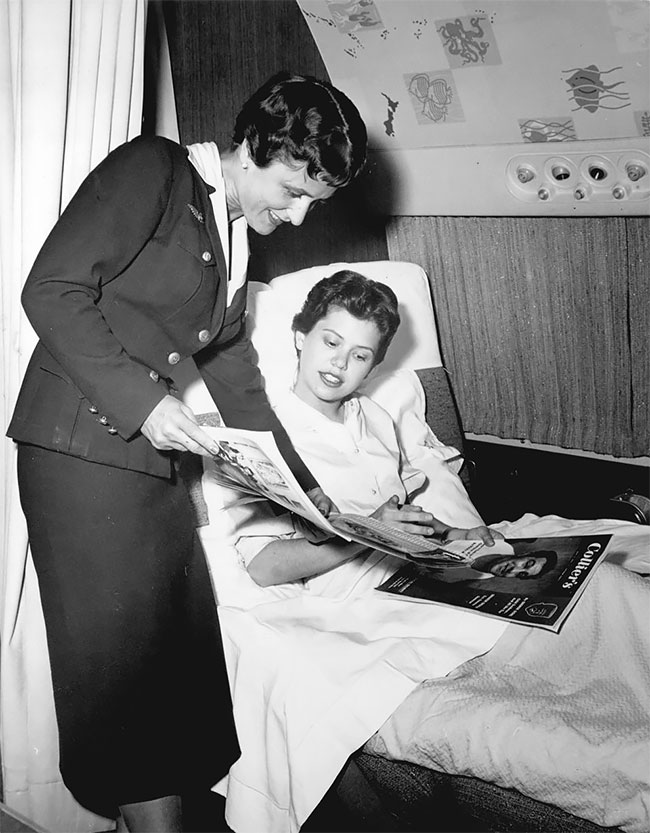 Extra pillow service was a nice touch. (Courtesy of Iberia) 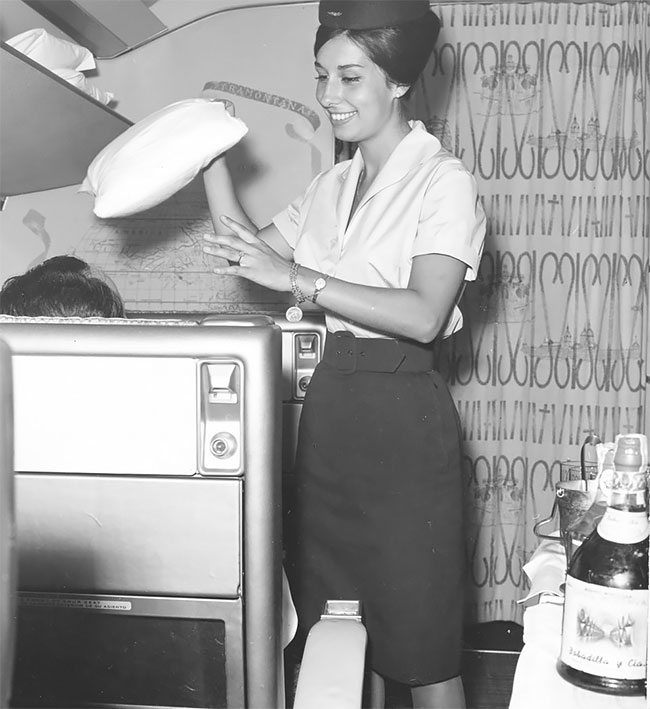 Instead of staring into screens, kids would get a geography lesson — at least on this Iberia flight. (Courtesy of Iberia) 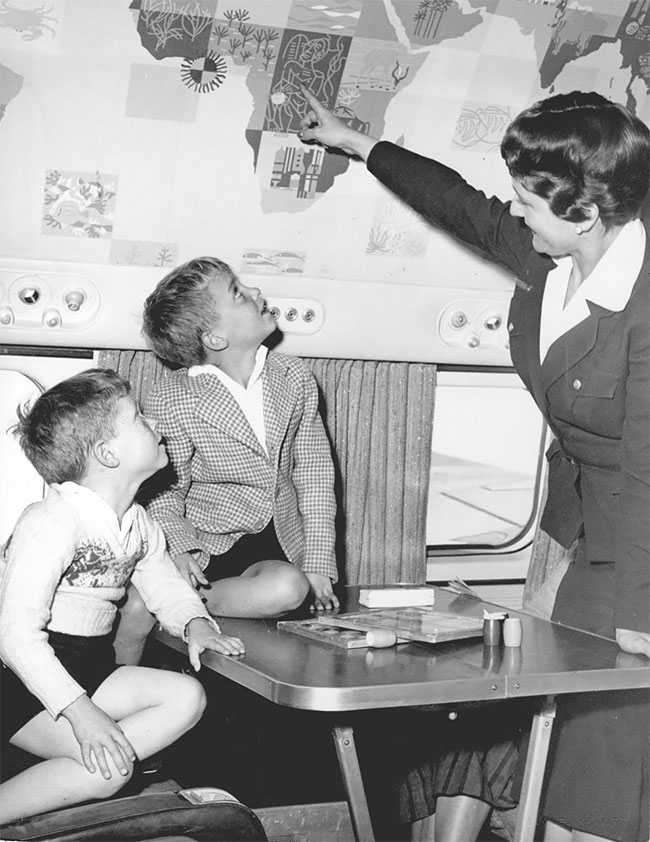 Plane food was made fresh on KLM in 1958, and even hand-delivered by the chef. Is that caviar? (Courtesy of KLM) 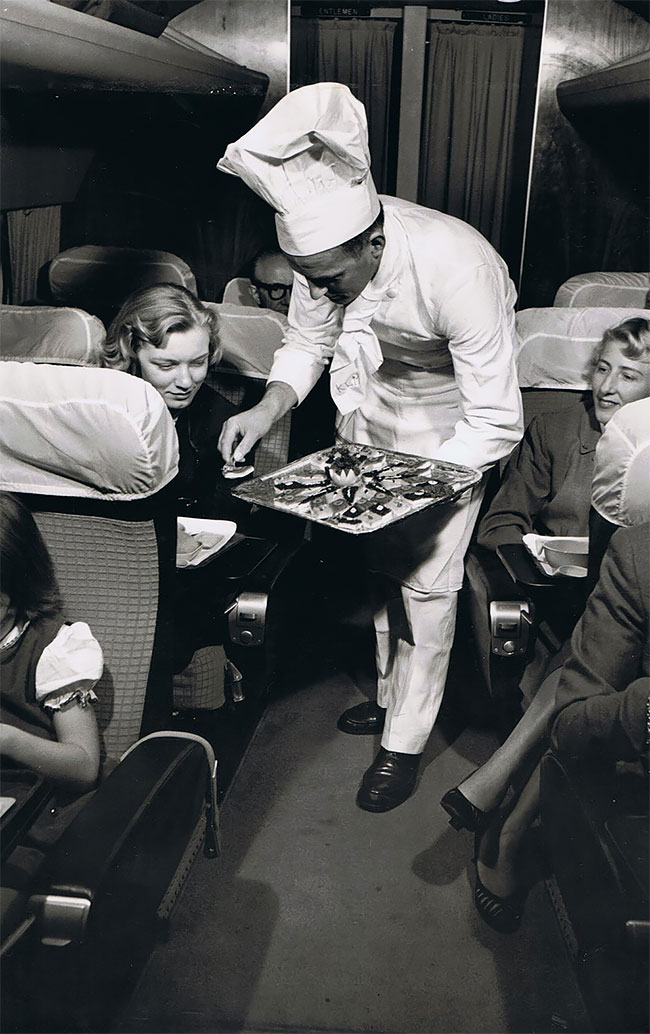 Meals were decadent on this British Airways flight in the ’60s. (Courtesy of BA Speedbird [Heritage] Centre) 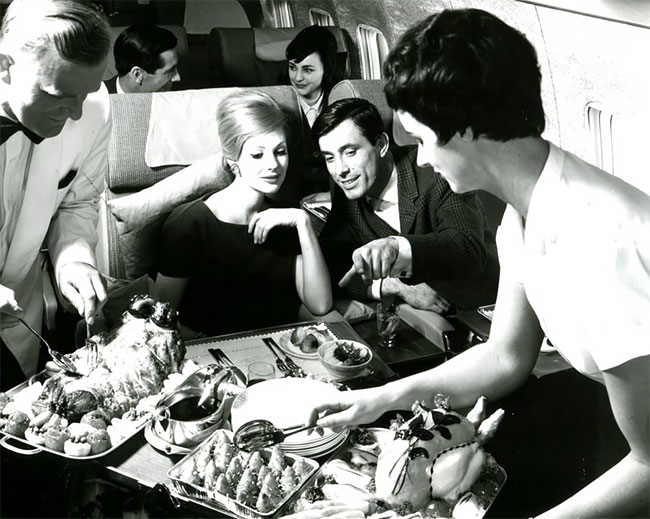 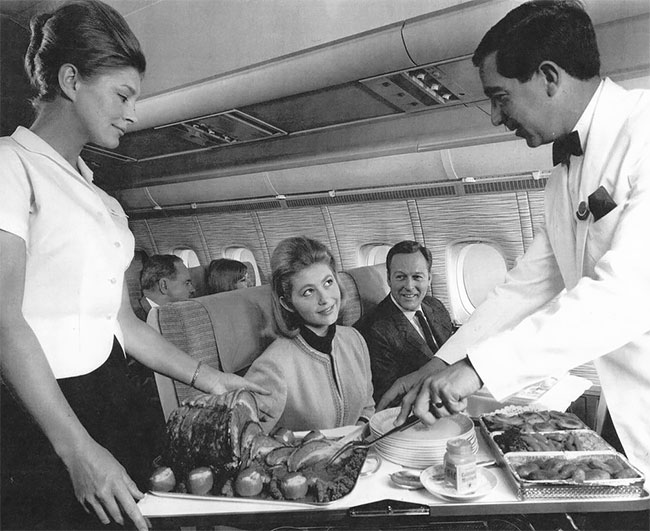 Rather than prepackaged in tin foil, steak was cut seat-side. (Courtesy of KLM) 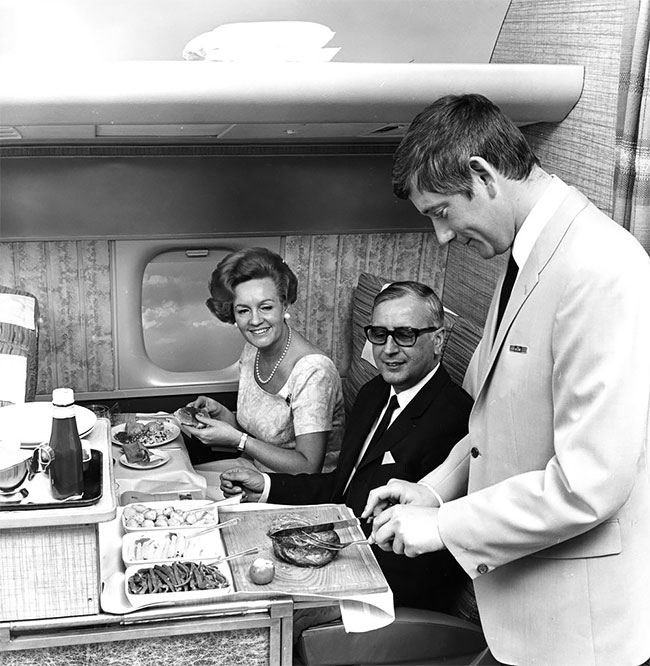 Cocktails on BA were made to order, and there were real bars to enjoy them in. (Courtesy of BA Speedbird [Heritage] Centre) 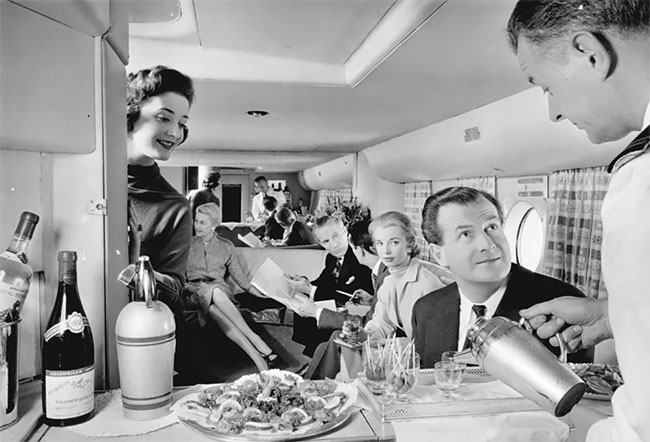 The whole set up was just really social on this 1971 KLM flight. Comparatively, flying today is like being on an airborne bus. (Courtesy of KLM) 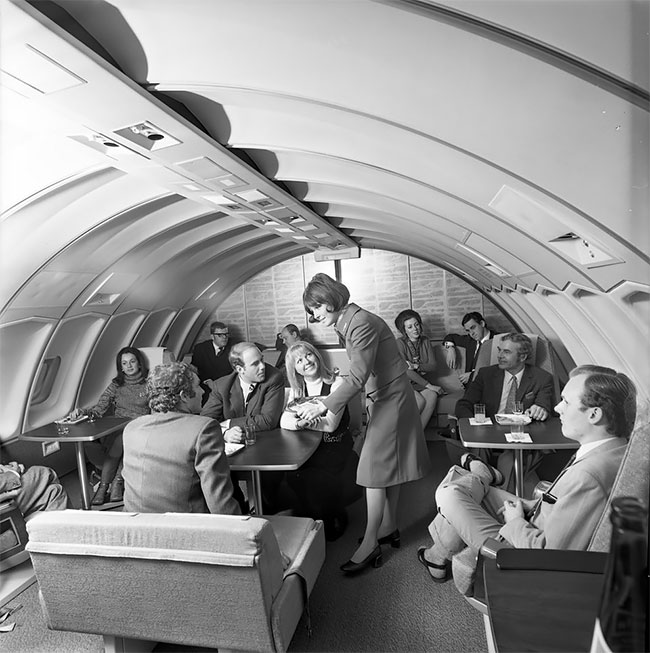 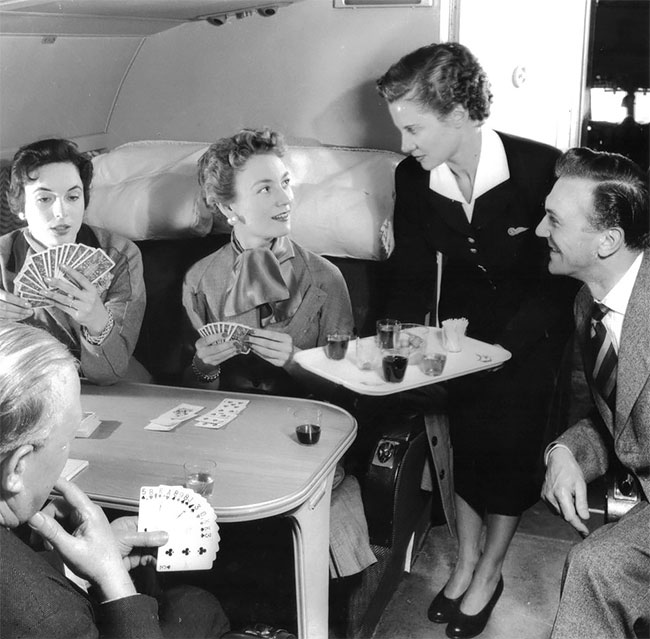 A lot of cards. That’s probably the downside to not having entertainment centers in every seat. (Courtesy of the Delta Flight Museum) 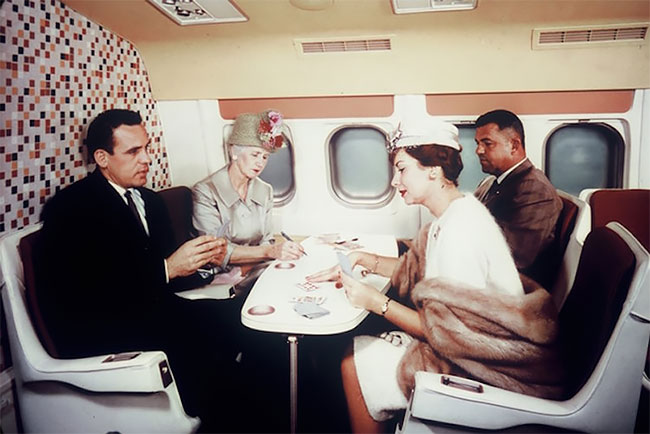 Hopefully you knew your fellow travelers, otherwise this set up could be pretty awkward. (Courtesy of the Delta Flight Museum) 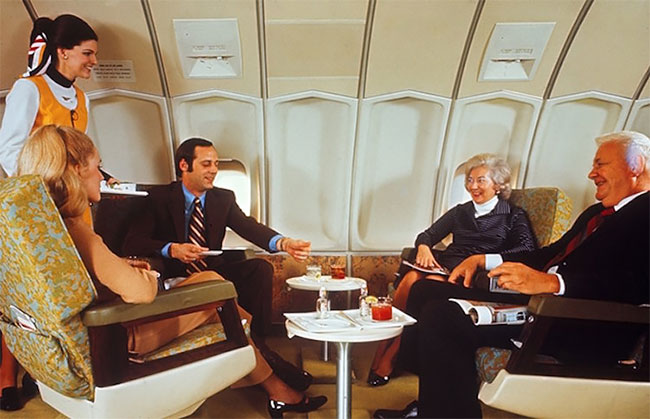 These are Iberia’s airline “hostesses.” They’re not flight attendants, and certainly not stewardesses. (Courtesy of Iberia) 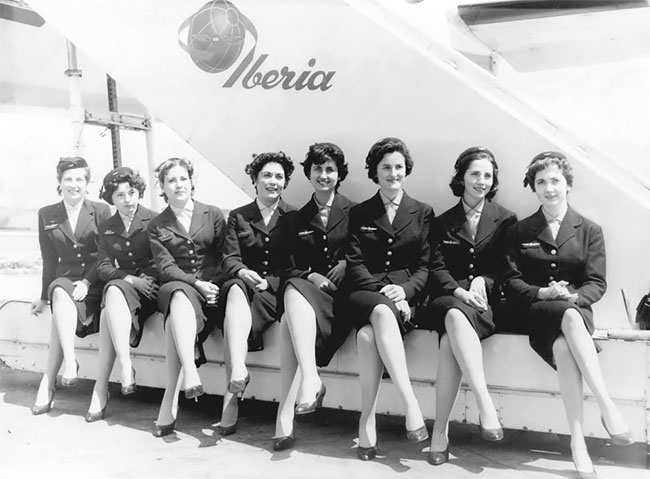 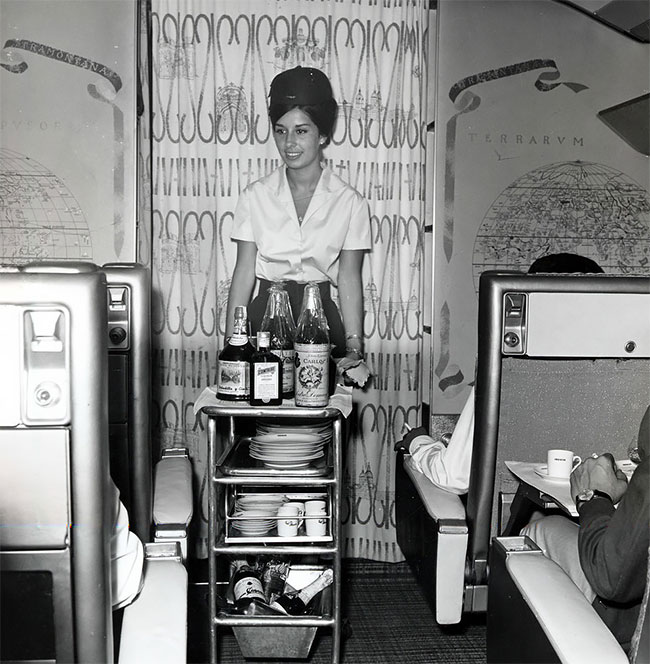 Delta’s colorful summer uniforms in the late ’60s really capture the essence of the time. (Courtesy of the Delta Flight Museum) 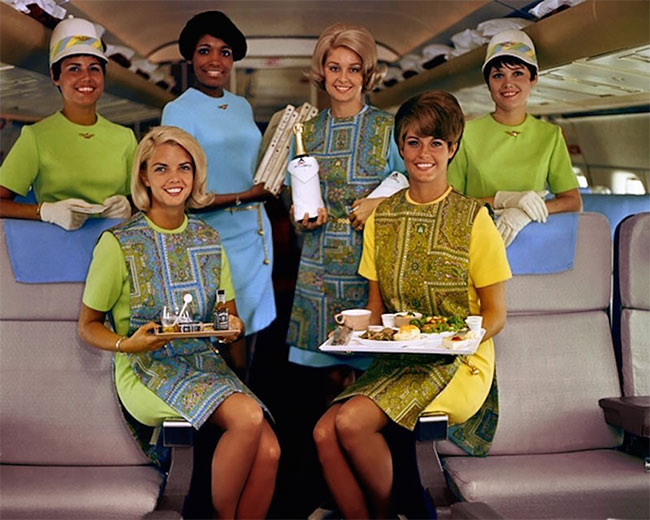 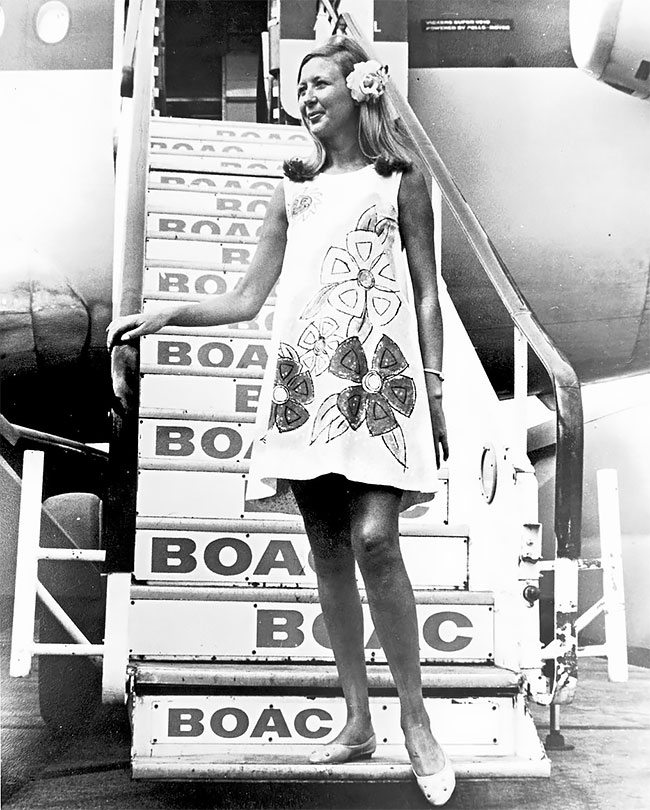 The World In The 1890s Through 12 Glorious Photos
Lettering Artist Rafael Serra Creates Popular Logos in A Vintage Spirit
Stunning Examples of the Rhinoplasty Surgery from the 1920s and 1930s
Fifteen Young Women About to Break the World Record for Passengers in a Mini, 1966
Amazing Vintage Photos of Françoise Hardy on the Set of ‘Grand Prix’ in1966
Artist Adds Creative Twist To His Travel Photos with Paper Cut Outs
Hilarious Finalists of Comedy Wildlife Photography Awards 2020
Primary Colors
"Postcards From Google Earth": This Artist Finds Strange Beauty in Google’s Apocalyptic Glitches
If Sailor Moon Was Goth
Before And After: Lithuanian Photographer Showed How Motherhood Changes Women
Australian Bureau Of Meteorology's 2018 Calendar
Fascinating Black and White Pictures of New York Street Life in the Late 1960s
Amazon’s The Lord of the Rings Series Unveils Superb Character Posters
Breakfast in Bed: Extraordinary Color Photographs Revealed the First Class of Air France in the 1950s
Life in the Past Through Stunning Color Photos Captured by Fred Herzog
A Globe-Trotting Photographer Has Captured Some Of The World's Most Beautiful Roads
"The Owls Are Not What They Seem": Magical Pictures Of Owls By Daniel J Nevares
It's Ginkgo Time
Photo of the Day: The Knight and His Steed
Meet Edward Burtynsky, The Winner Of UK Master Of Photography 2018
"Lavatory Self-Portraits In The Flemish Style": Artist Recreates 15th Century Paintings In Airplane Toilets
The Veolia Environnement Wildlife Photographer of the Year Competition
"Perfect Darkness": Foggy Nights and Melancholy Landscapes in Cinematic Photographs by Henri Prestes
1940s, 1970s, between, glamorous, photos, vintage