Wide Seats And Plenty Of Legroom: These Old Pan Am Photos Show How Much Airline Travel Has Changed 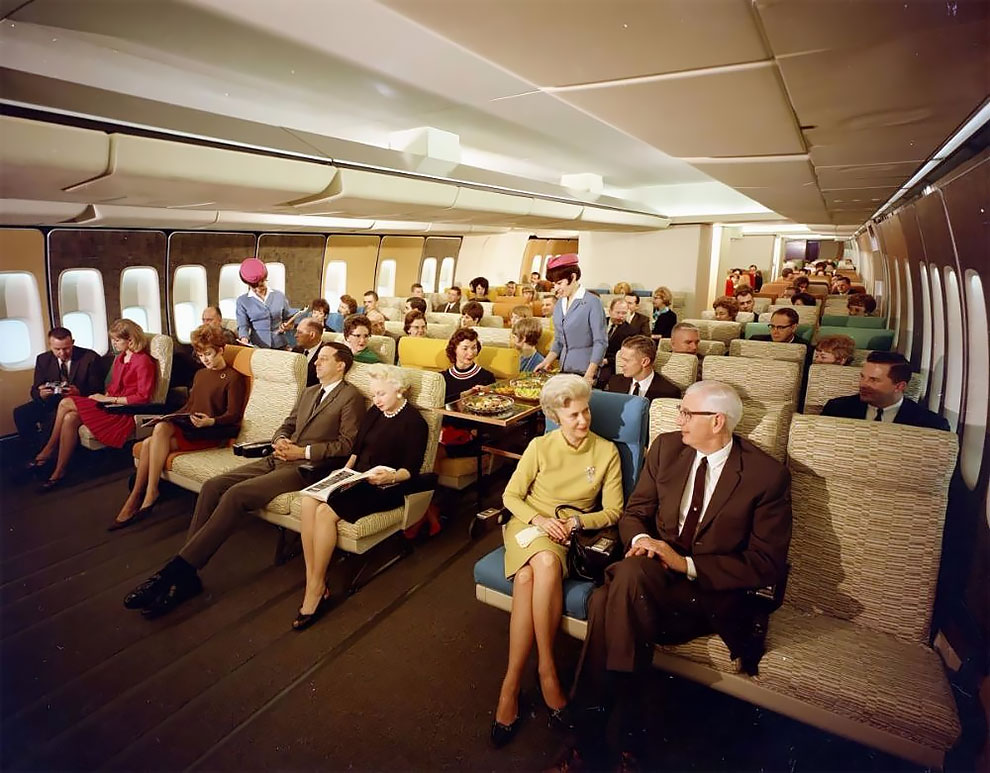 Pan American World Airways, commonly known as Pan Am, was the largest international air carrier based in the U.S. from 1927 until 1991. The airline has always had a place in popular culture as a kind of standard bearer for luxury and excellence. 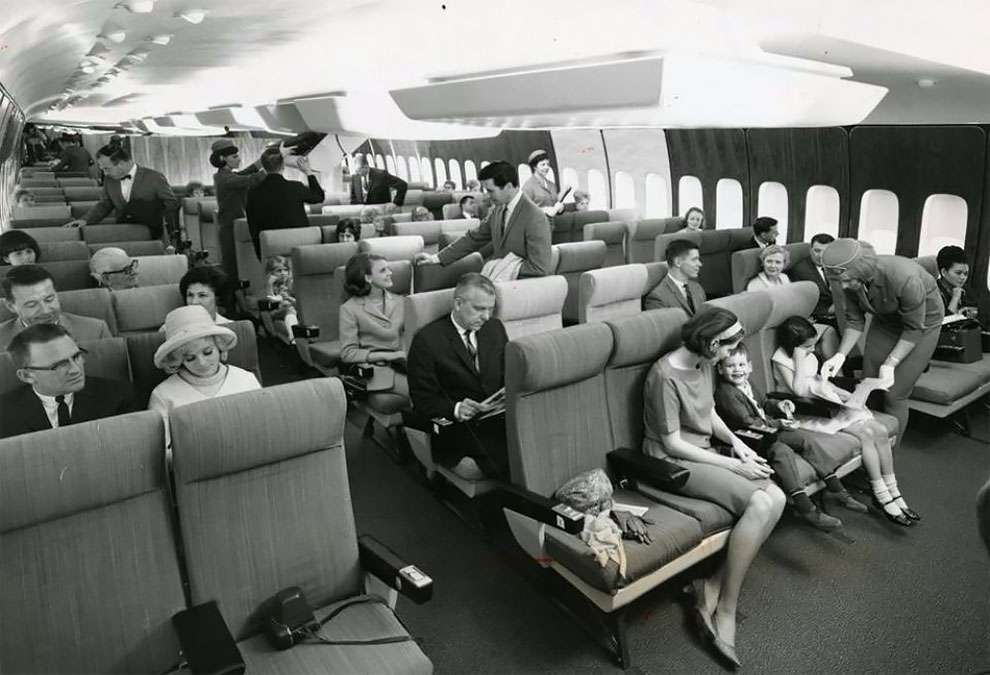 Flying back in the era before the Airline Deregulation Act of 1978 — in coach — wasn’t a whole lot different than today. Sure, the seats were a bit wider, you had some more leg room, meals were gratis, but then again the air in the cabin was a toxic stew of cigarette smoke. Flying in first class – even domestically – was a different matter. 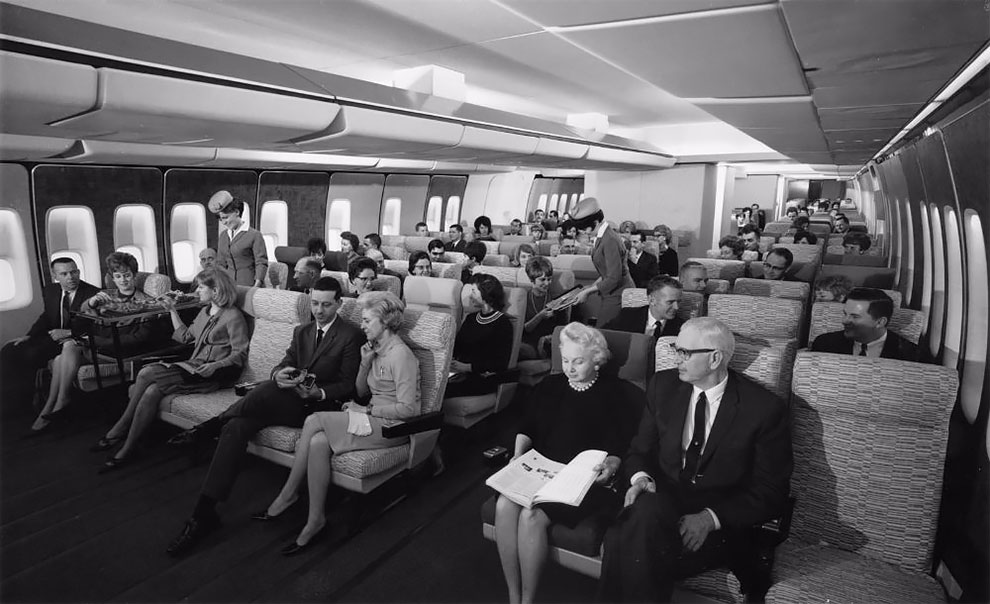 Today domestic first class means free drinks, free (perhaps edible) food, and a seat that might not leave you with a chronic back condition. While deregulation played a large role in driving down quality and prices, this ‘golden age’ of luxe airborne lounging was largely brought to an end by the Arab embargo induced oil crises of the 1970s. In an ironic twist, if you’re looking to have a drink in a 1970s style airborne lounge today, the Middle Eastern carriers Etihad and Emirates are your best options. 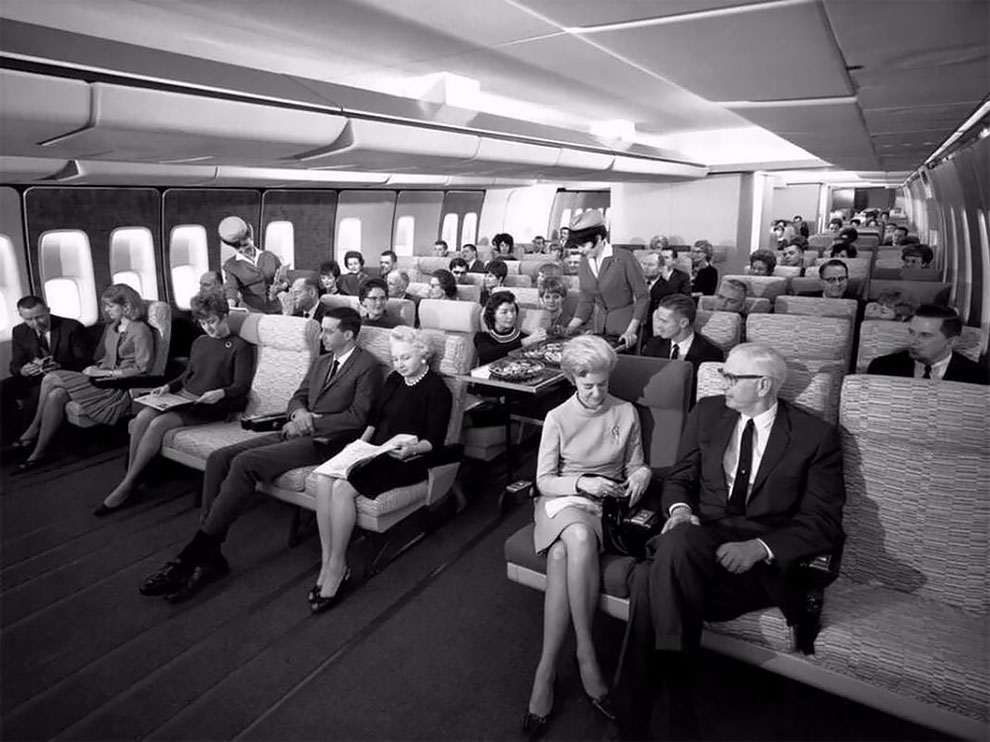 Back in the early 1970s it wasn’t just absolutely over-the-top Middle Eastern carriers who offered this sort of lounge experience (with all the smoke in the air, showers no doubt would have been appreciated). When the first Boeing 747 took to the skies in 1970, its iconic upper deck presented airlines with an interesting conundrum: initially the space wasn’t certified by the FAA to carry passengers during takeoff and landing. While certification came quickly enough, in this era, competing for passengers meant providing unique amenities. Therefore many airlines decided to convert the space into lounges, typically, but not always for premium fare passengers. Here are some photos of the glamorous flying lounges from between the late 1960s and early 1970s.

Streamliners: Locomotives And Bullet Trains In The Age Of Speed And Style
Portrait Photos Defined Hairstyles of American Young Men in the 1970s
Arnold Genthe’s Cats : Women Posing With ‘Buzzer’ From A Century Ago
This Photographer Colorized 30 B&W Photos Of New York From Years Ago
Twelve Parsecs: The Ultimate Star Wars House Is On Airbnb
25 Year Old British Man Dresses As A 19th Century Regency Gentleman In Bespoke Clothing He Designs
What the World Eats By Peter Menzel And Faith D'Aluisio
A Look Inside One Of The World’s Most Isolated Tribes With Incredible Photos You Probably Haven't Seen Before
Shakhti 360 Leti: Luxury Hotel in Himalayas
The 1986 Oldsmobile Incas Had The Wildest Dashboard You've Never Seen
The Dubai Miracle Garden That Was Essentially Built On A Desert
People Of The World: Māori In Stunning Photographs By Jimmy Nelson
Fly Geyser: A Collision Of Human Error And Natural Geothermal Pressure Created This Rainbow-Colored Geologic Wonder
Vintage Men's Magazine: Cool Pics Of Cavalier's Beauties During The 1960s
"Birds Of Britain": Photographer John d Green Captured The Beauties Of London In 'Swinging Sixties'
Amazing Photos Of “Luxurious” Lada Stretched Limousines
Stunning Photos of Russian Northern Roads as Roads to Hell
Stunning Early Deadliest Tornado Photographs From The 19th Century
Arctic Expedition Discover Mysterious Hole Cut Into The Ice
1970 Lancia Stratos Zero: A Crazy Concept from The Wedge Era
Earth, Then And Now: Dramatic Changes In Our Planet Revealed By Incredible NASA Images
Humorous Comic Fat Lady Postcards by Donald McGill From the Early 20th Century
Photographer Uses Her Dad’s Old Slides To Create A Nostalgic Photo Series
Please Don’t Step On The Fish! Vietnam’s Unique Flooded Cafe
airplane, comfort, luxury, panam, retro, travel, USA