Unique House for the Atomic Age from 1953

Fireplace in front yard is built into side of hill. Lava appearance of hill comes from stippled Gunite. 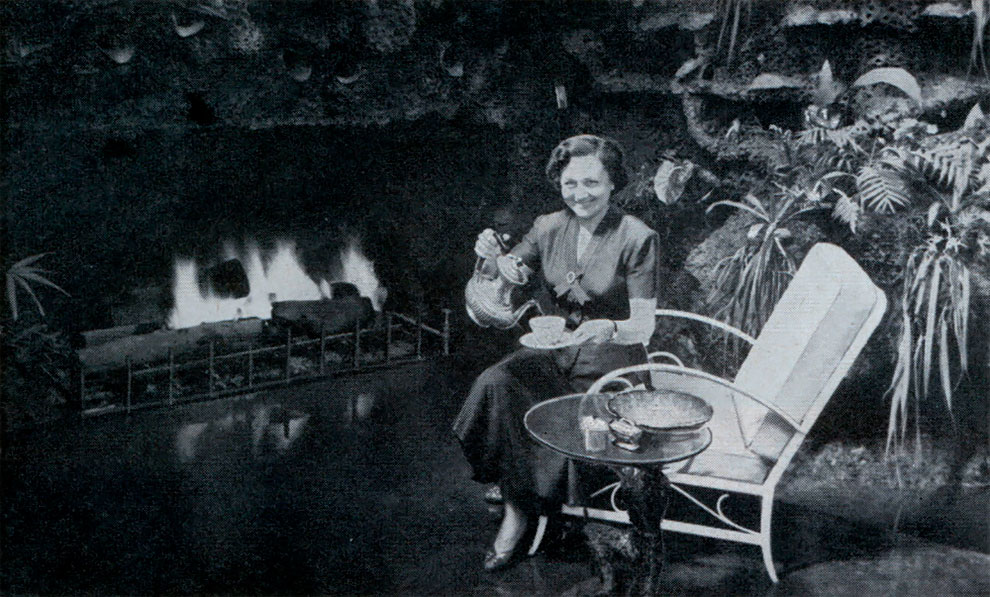 In 1953, a swimming pool that became an automatic decontamination bath during an A-bomb attack was one of the features of a home that Hal B. Hayes, Hollywood contractor, was completing for himself. In the hillside next to the swimming pool he’s building an underground sanctuary that you reach by diving into the pool.

Television set is built into huge tree trunk fitted into wall of living room. Dials are mounted at side. 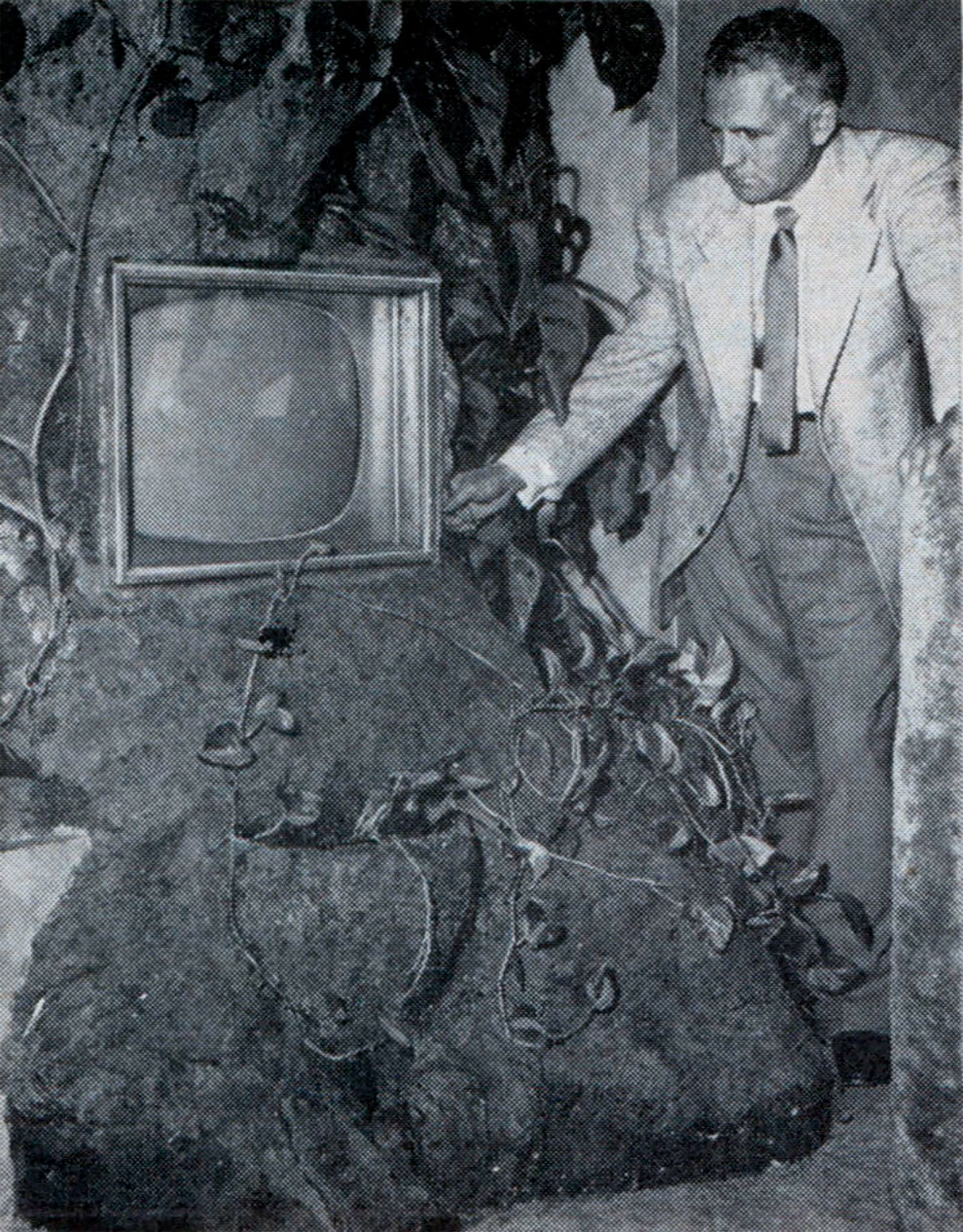 His house was designed to “bring the outdoors indoors” for ordinary peaceful living, yet has a structure built to resist great destructive forces. Several of the walls were completely of glass that would be swept away by a powerful shock wave, but could later be replaced. A continuation of his living-room rug was pulled up to shroud the glass wall in that room when a button was pressed.

Other walls of the house have a fluted design to resist shock wave and a fireproof exterior surface of Gunite.

Tree trunks and limbs are used for furniture, here support the glass top of table which Hayes is using. 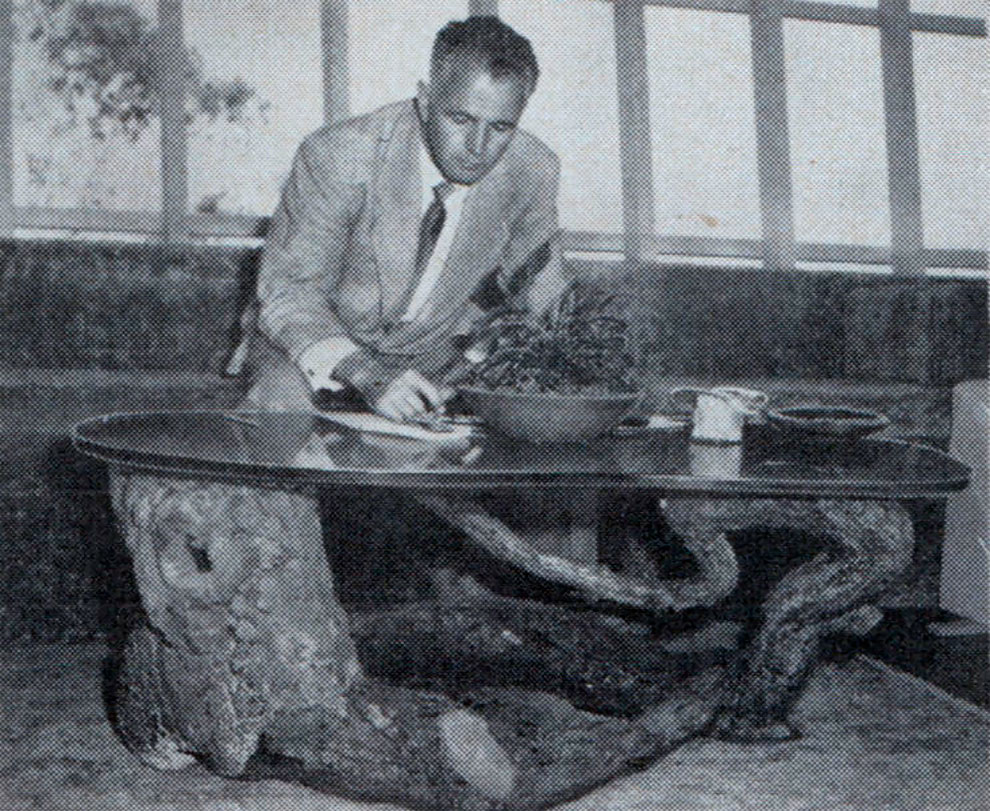 A garden growing in half a foot of soil on the flat roof provides insulation against extreme heat or shock. All exposed wood, inside and outside of the house, was fire-resistant redwood coated with fire-retarding paint. In addition to the underground sanctuary, equipped with bottled oxygen, there was a bombproof shelter in the house itself, consisting of a large steel-and-con-crete vault containing a sitting room and bathroom. Other features of the home include a three-story indoor tree. 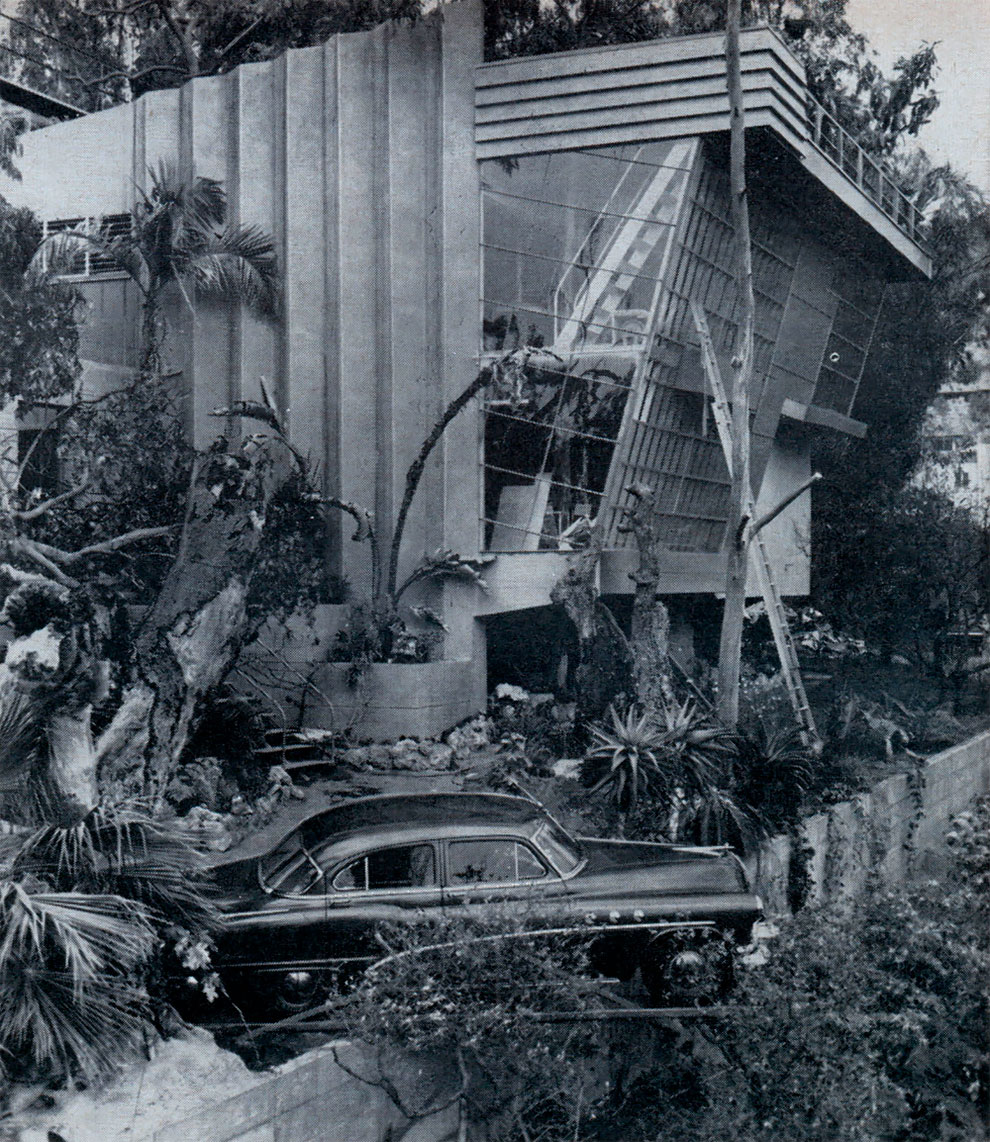 Cutaway shows approach to underground sanctuary via swimming pool. Hayes figures that any radio-active contamination on a person’s body would be washed off while swimming to the entrance of the sanctuary. 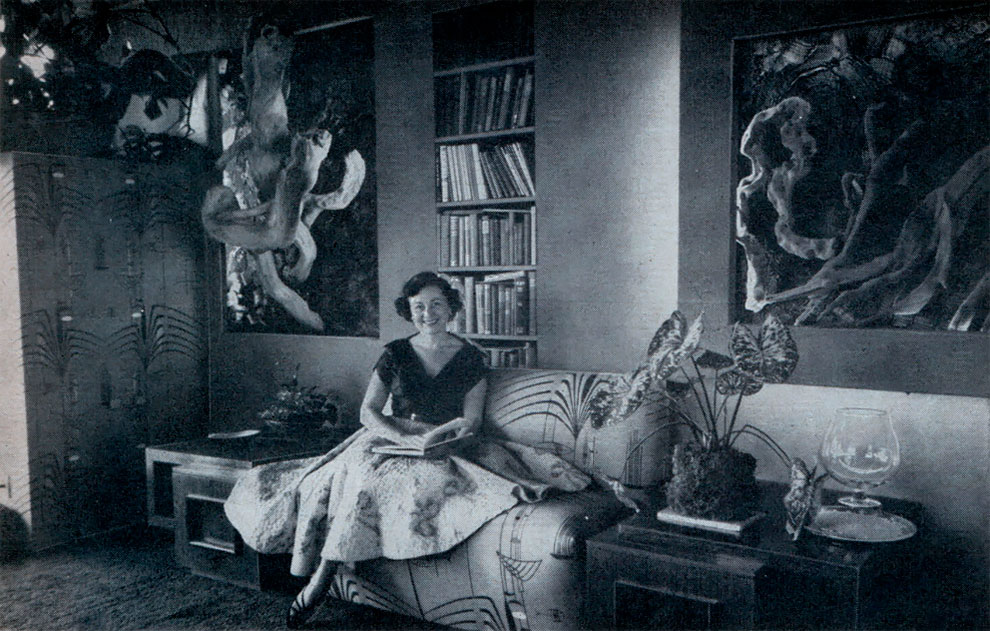 Smoke from midroom fireplace is caught by umbrella canopy, drawn up the chimney by fan mounted inside. 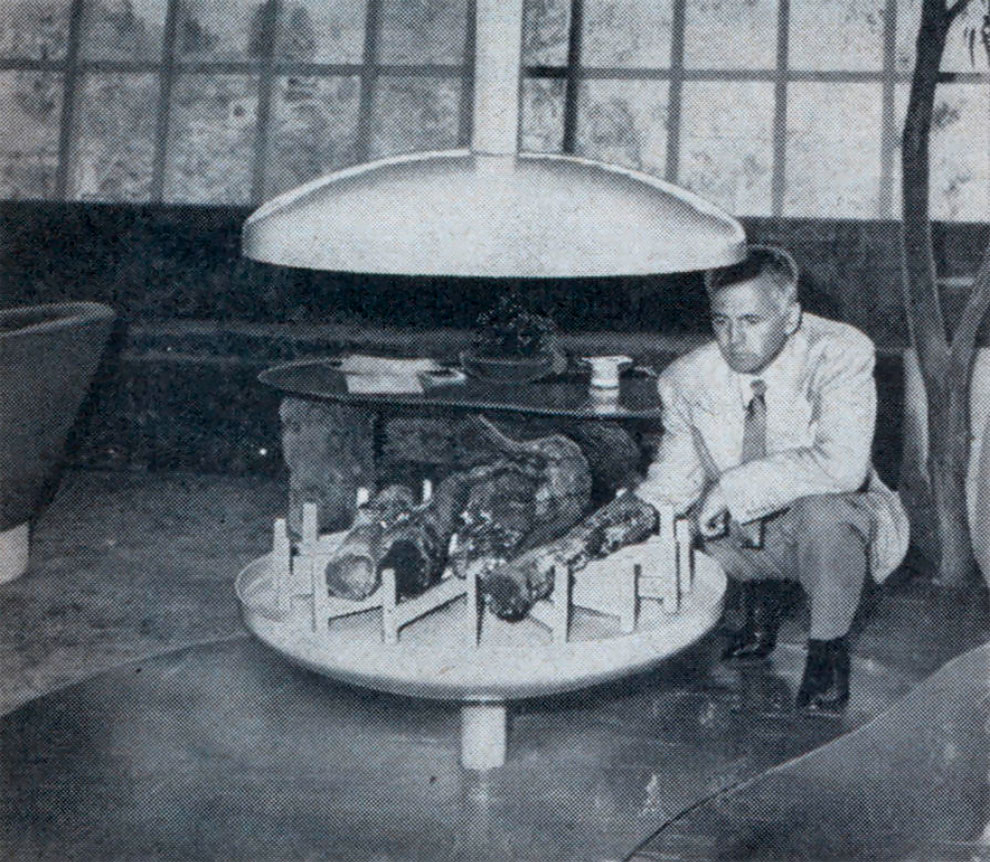 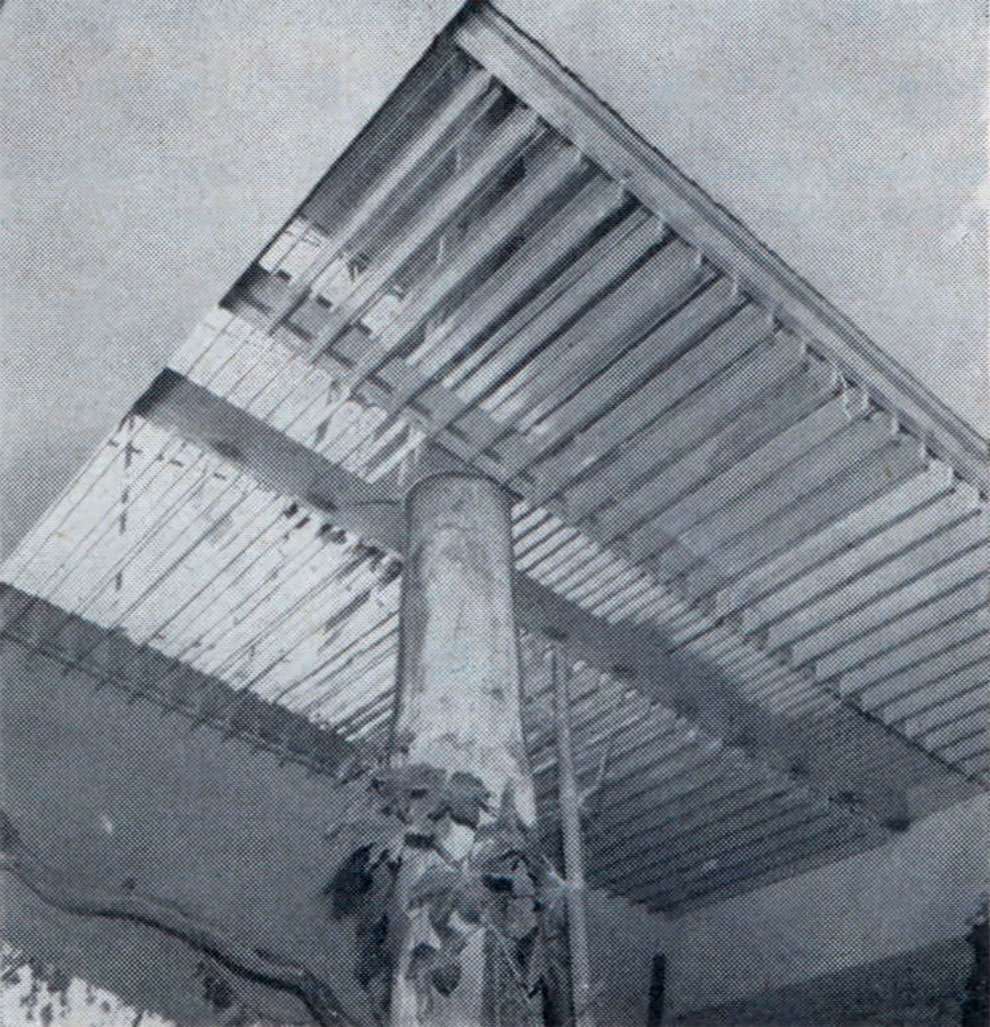 Main entrance of house is through tunnel visible at left. Glass walls at right protect an orchid grotto. 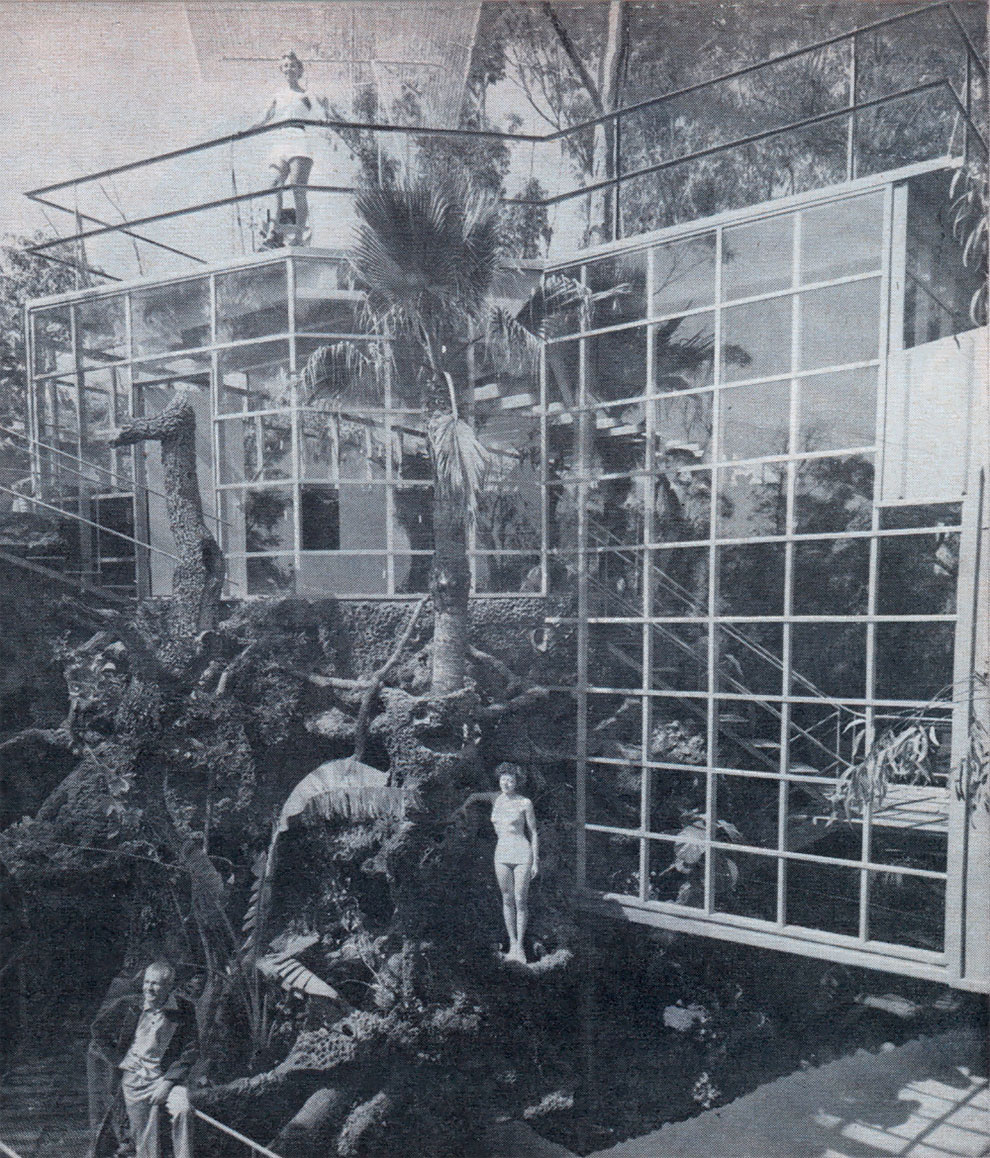 Car is parked on cantilevered steel tracks which overhang cliff below house. Space is at a premium. 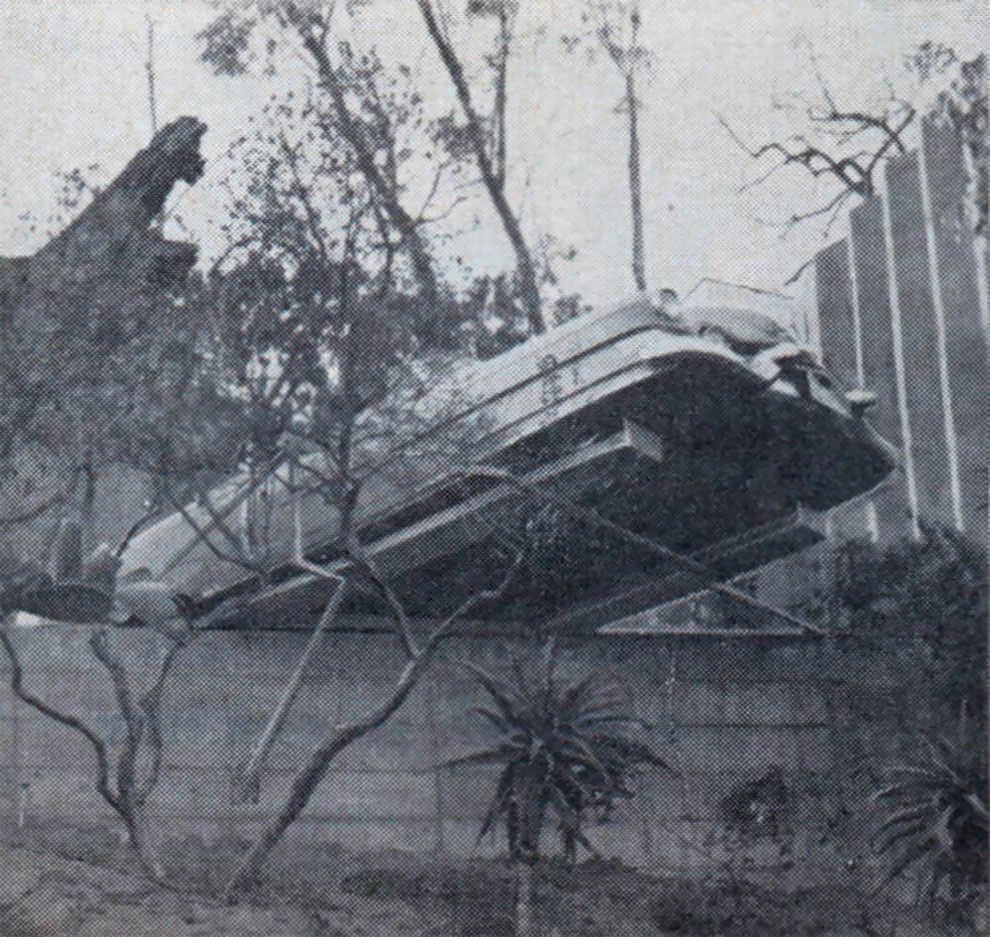 Bomb shelter in the house itself has strong steel shutters which can be closed in case of air attack. 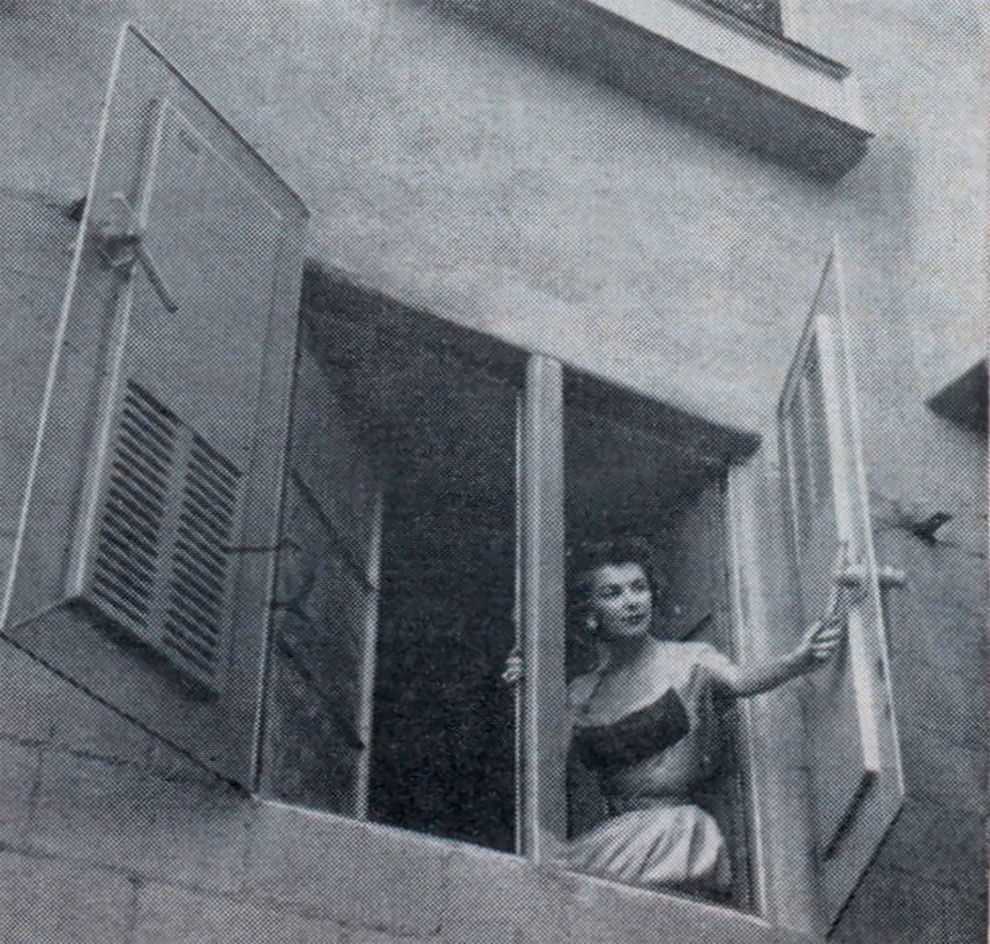 Lettering Artist Rafael Serra Creates Popular Logos in A Vintage Spirit
Bioclimatic Architecture
Solitary Wilderness Shelter Provides Warmth to Mountain Hikers
Chilling Photographs of Summer Tourists on the Acropolis in Athens in the Early 1980s
Lovely Snaps Capture People With Their Cats Over 100 Years Ago
Marilyn Monroe Wishing You All a Happy Fourth of July
Extraordinary Self-Portraits of American Street Photographer Vivian Maier
Amazing Examples Of The Live-Action Reference Filmed For Disney's "Cinderella" In 1950 As You’ve Never Seen Before
Meet The Solar Egg, A Giant Golden Sauna Built In Luossabacken, Sweden
Wide Seats And Plenty Of Legroom: These Old Pan Am Photos Show How Much Airline Travel Has Changed
Photographer Uses Her Dad’s Old Slides To Create A Nostalgic Photo Series
When Paris Was Protected with Sandbags and Masking Tape, 1914-1918
Wake Up Little Susie: Vintage Photos That Show Styles of Teenagers in the 1950s
Playboy Magazine Covers in The 1950s Are Not What You Imagined Them to Be
Chinese Propaganda Posters From The Cultural Revolution Ages, 1960s-1970s
Billboard Houses For The Homeless
Wonderful Photos Of Postwar New York City In 1946 By Todd Webb
Minimalistic Photos Of Architecture That Pop With Color, Geometrical Elements
Vintage Snaps Capture Life at Venice Beach in 1970
This Instagram Account Combines Brutalist Architecture With Giant Cats
BMW Isetta: The Iconic Miniature Bubble Car Of Automotive History
People Blend Themselves In With Vinyls
This Time Travelling Instagrammer Got Stuck Somewhere In The 1950s
A Giant Nuclear Mushroom Cloud Made of Steel
1950s, atomic, hideouts, nuclear, retro, shelter, vintage, war