Taiwanese Artist Creates An Epic Blue Mountain-Scape, As A Result Of Hundreds Of Image Layers 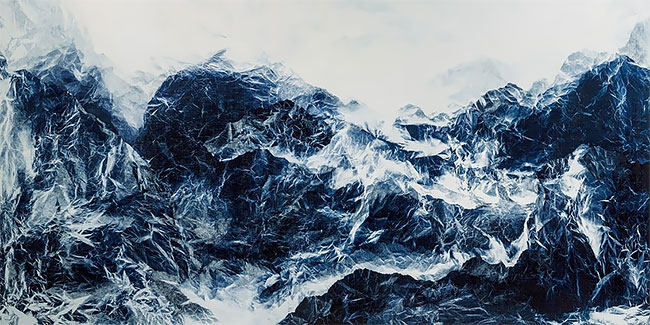 The epic blue mountain-scape you see above is a composite of hundreds of image layers. But they weren’t made with Photoshop — or a digital camera, for that matter.

Instead, artist Wu Chi-Tsung turned to analog methods from the past. He drew from both the Western tradition of cyanotype-making, developed by Sir John Herschel in 1842, and Eastern Shan Shui (“mountains and water”) painting, which dates to 5th-century China. 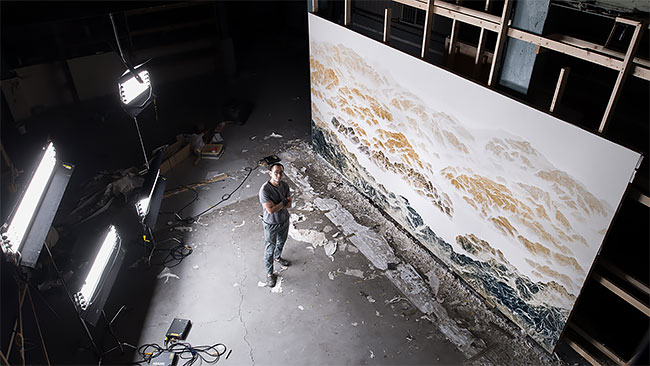 Taiwanese traditional painter known for his experimental collages. When Wu began working as his assistant, more than a decade ago, he preferred Western art and materials, dismissing the brush-and-ink formula of traditional Chinese painting as too constricting.

Each collage takes up to two months to complete. To begin, Wu covers dozens of sheets of xuan (rice) paper, roughly 4 by 8 feet, with an emulsion made from iron compounds that turn deep blue after being exposed to sunlight. 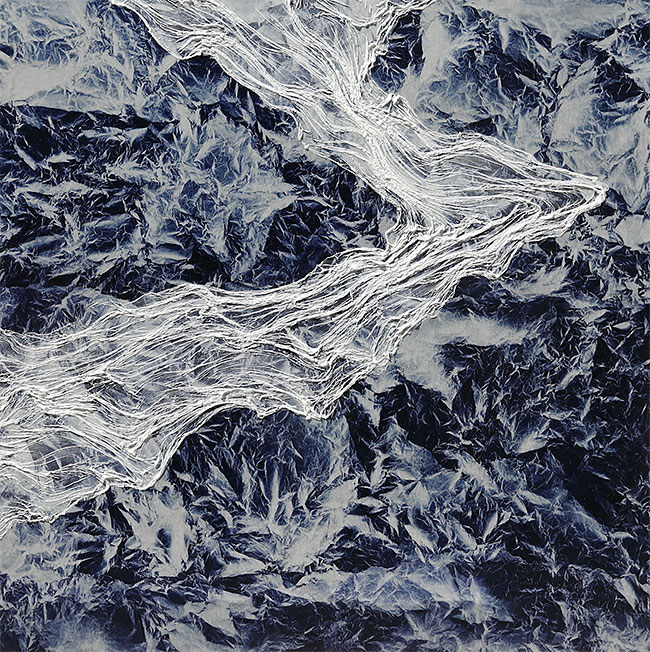 After washing the paper to fix the chemicals, it’s time to compose the image. Wu selects dozens of wrinkled papers and individually pastes them flat onto the canvas, sealing each layer with acrylic gel before adding a new one. 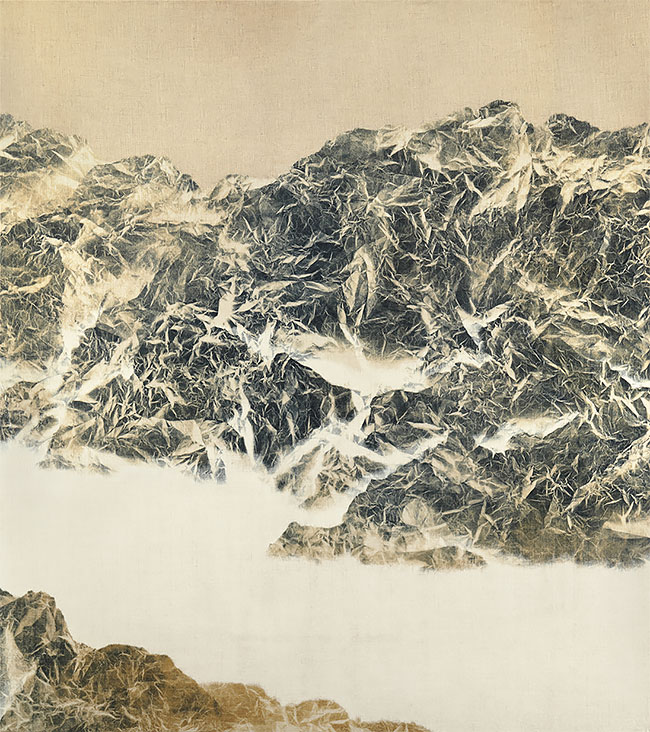 According to Wu Chi-Tsung: “In the early spring of 2015, Mr. Ni Tsai-Chin, a prestigious artist and art critic in Taiwan, died of disease. When learning the news, I recalled a summer vacation more than 10 years ago some friends and I served as assistants of Mr. Ni. We experienced a memorable summer in Mr. Ni’s dormitory in Tunghai University. Being indulged in calligraphy and ink art all day, we often chatted extensively from southern transition of Chinese landscape paintings in Song dynasty to the western art made in Taiwan. His expanded horizons, insightful arguments, integrated knowledge of traditional and contemporary arts, and persistence in defending cultural subjectivity have nourished my art development since my novice periods.”

“To commemorate Mr. Ni, I present Cyano-Collage in a form of ink painting collage, what is Mr. Ni’s conventional method, combines with wrinkled-texture cyanotype. Rice papers with photosensitive coating were wrinkled and exposed under sunlight to record the lighting and shading on the paper. A selection from dozens of pieces of cyanotype photographic paper was reorganized and edited before mounting on a canvas. The work is displayed in a style resembling Chinese Shan Shui and photomontage.” 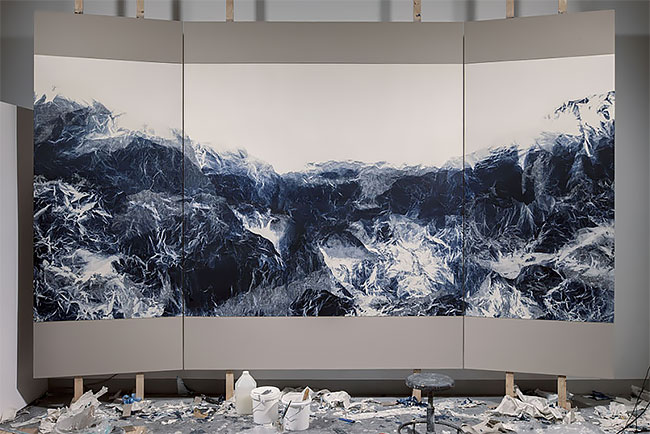 Childhood Of Tomorrow: The Incredible Surreal Art Of Simon Stålenhag
In Love To Nature And The Sea, This Artist Upcycles Old Surfboards And Create Art On Them
This Woman Creates A Gender And Race-Neutral Deck Of Cards, Can’t Keep Up With The Orders
Giant Ninja Turtle Takes Over Minsk: Huge Leonardo Is Exploring the World of Soviet Architecture
Roman Opalka – The Polish Artist Who Spent Half His Life Painting From 1 To Infinity
The Superb Figurative Portrait Paintings By Jie Gaoart
The Best Of Black Lives Matter Protest Signs
Flying Citroën Cars By Jacob Munkhammar
Tim Gray Creates Amazing 3D Animations That Brilliantly Appear To Break The 'Fourth Wall' Of Instagram Posts
Kate Moss for Mango, Fall 2012
Satirical And Minimalist Illustrations By Francesco Ciccolella
The New Aesthetic of Graphic Design and Typography by Daan Rietbergen
Urban Sketches and Warm Landscapes by Kaye Kang
40 Times People Thought Their T-Shirts Were Cool But Looked Completely Cringeworthy
Animals Etched Onto Dirty Cars By Russian Artist Nikita Golubev
This Guy Has a Very Strange Drive to Work with This Crazy Car in the Lane Next to Him
Pandemic Inspires Artist to Turn Artificial Fingernails Into Stunning Works of Art
Russian Artist Has Left His Mark In The Most Unexpected Places Across The Country And Beyond Its Borders
Beautiful Feminine Photo Portraits By The Russian Fashion Photographer Svetlana Belyaeva
Artist Paints Stunningly Realistic Portraits on His Hand and Stamps Them on Paper
Here's What You Need To Know About The World's First Instafamous Ghost
Child Prodigy Aged 13 Creates The Most Amazing Nature-Inspired Drawings You’ve Ever Seen
Artist Reimagined Famous Paintings To See What They’d Look Like If They Were Painted During The Coronavirus Crisis
Invader’s New 'Star Wars' Street Art Project Pays Homage To OG Filming Locations
art, china, collages, composite, painting, taiwan, Wu Chi-Tsung