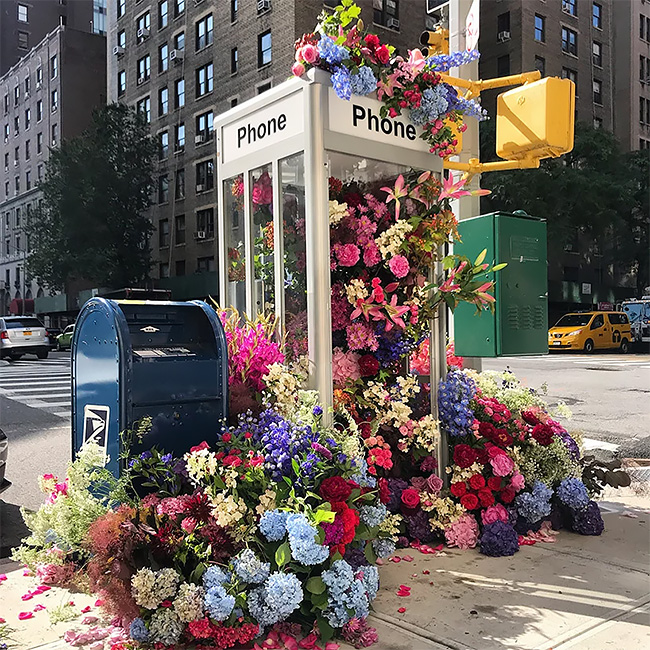 Botanical designer Lewis Miller returns to the NYC streets to enliven an otherwise ordinary corner with a bountiful bouquet of flowers. 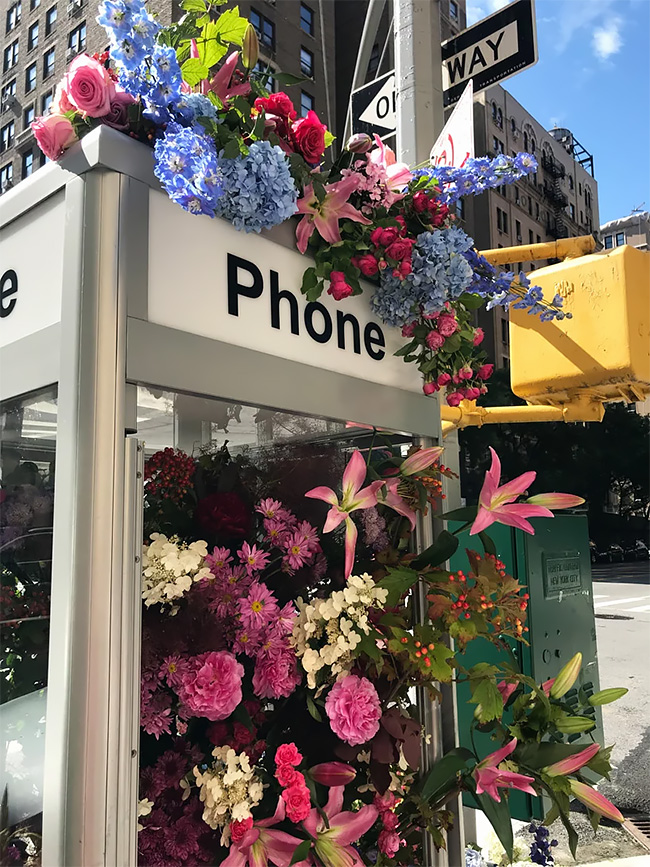 A few years ago, Miller turned empty garbage cans into voluminous vases, each which overflowed with colorful blooms and lush greenery. His most recent street side installation emerges from a telephone booth at 825 West End avenue in Manhattan’s Upper West side, spilling out from within the booth’s sliding doors. 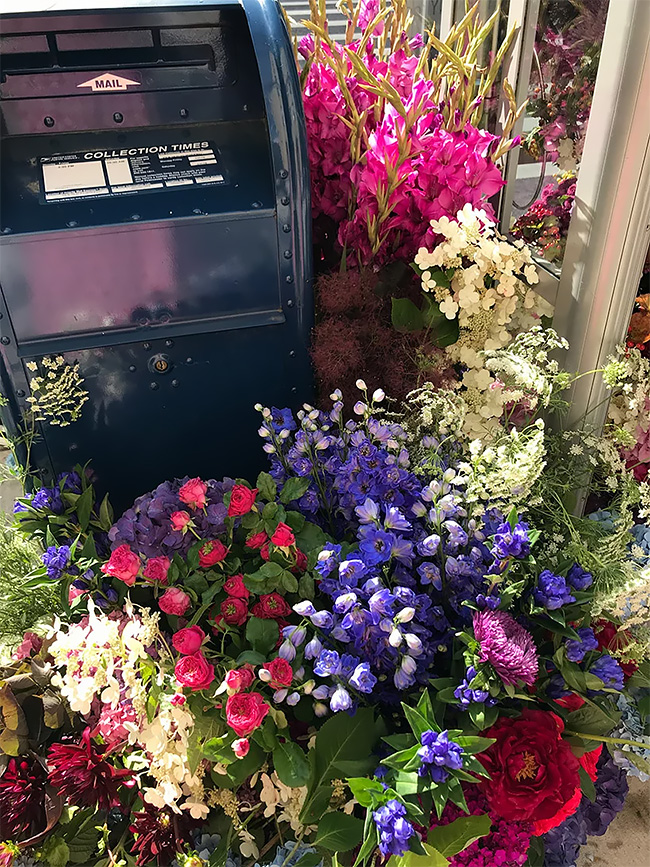 Miller’s latest ‘Flower Flash’ is a project that he and his team emphasize is a ‘constant pursuit of beauty’. 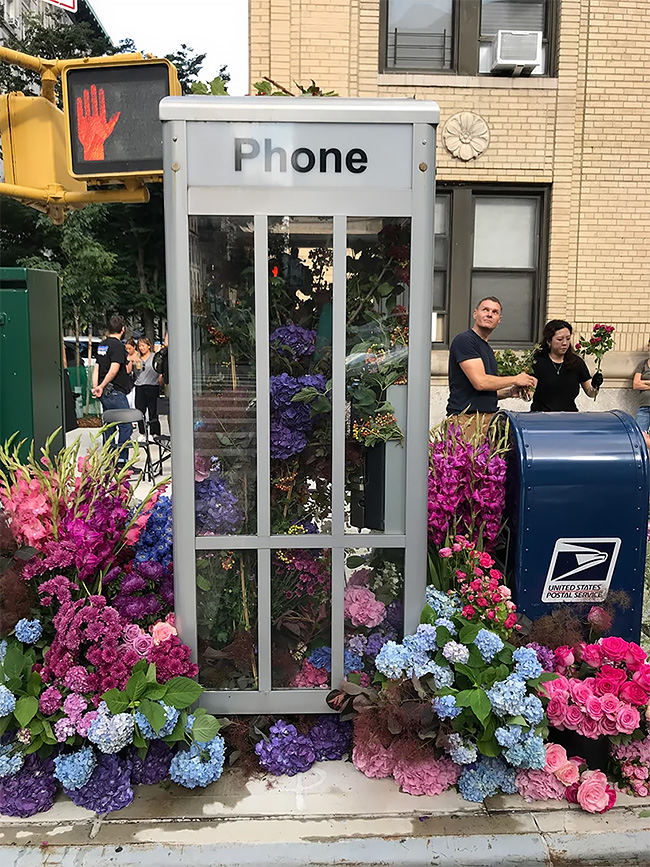 “We had never done a phone booth before,” Miller told Gothamist. “We were debating between a phone booth and a fire escape but ultimately this iconic phone booth on 100th Street and West End Avenue won out! During the execution of this particular flash so many neighborhood folk came out to tell us the history of this booth. It’s a working telephone and there is even a children’s book written about it called The Lonely Phone Booth.” 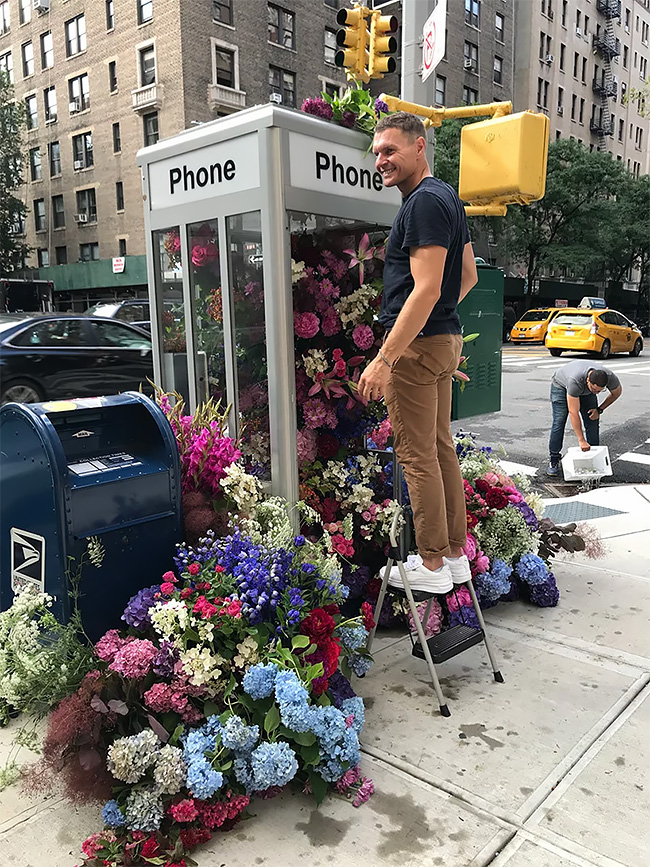 Stunning Black and White Photos of Manhattan Taken by Berenice Abbott in 1935 and 1936
Artist Julie Gonce Creates Stunning Organic Glass Sculptures
Wide-Leg Jeans: The Weird Fashion Style of the 1990s
Artist Duo STALLMAN Create ‘Canvas On Edge’ Collection
Pirate-Themed Scanner A Hit At NYC Hospital
This Artist Removes The Make-Up From Dolls And Turns Them Into Inspiring Real-Life Women
Artist Saša Aleksandar Creates Fantastic Fashion Masks Entirely Made Of Paper
Beautiful Vintage Black And White Photos Of New York City In The Summer Of 1938
Artist Brings Old Watch Parts To Life With Awesome Steampunk Sculptures
An Artist Sculpted Hunter S. Thompson's 'Fear And Loathing' Head And It's Too Much, Man
These 80-Year-Old Wooden Escalators Become A Beautiful Sculpture
Terrifying Plush Toys by Anna Sternik
15 Astonishing Sculptures That Turn Reality Inside Out
Funny Doormats That Will Make You Look Twice
Everything Rust On This Poster In 30 Days... Except The Product
"Refreshing Journey:" Chinese Bus Turned Into 'Swimming Pool'
Japanese Figure Maker’s Vitruvian Man Is Here To Beat The Hell Out Of Your Other Toys
Spread Love, Joy and Beauty: Ukrainian Painter Beautifully Decorates Glassware
This Teen Spent 400 Hours Creating A COVID-Themed Prom Dress Using Duct Tape
Kaleidoscopic Street-Art Creation By Douglas Hoekzem
This Is a Cannoli Lover's Dream Come True
Everyone Needs A Niffler Necklace
Be Yourself, Everyone Else is Already Taken: The World Of Daniel Lismore
Here Is A Literary Twist To The Banal Visiting Card
booth, flowers, installation, Lewis Miller, NYC, phone, street