16 Bizarre Inventions From The Victorian Era

If you think that organs and bones crushing corsets were the most bizarre creation of the Victorian era, you could not be more wrong. Victorians have come up with its fair share of weird inventions. Even though this era was a long period of peace and prosperity, science was going through a weird phase.

Below are 16 bizarre inventions from the Victorian era, some useful, and some… not so much. 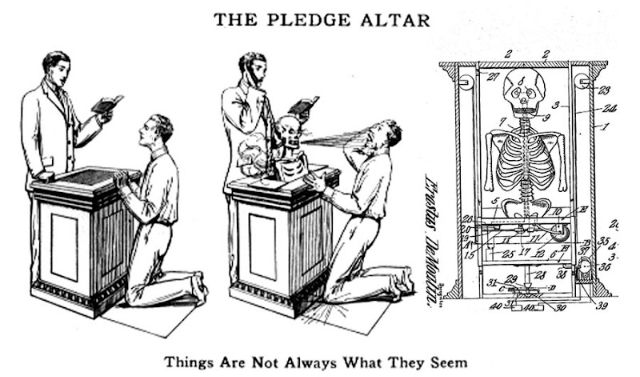 Oh, those Victorians! They did love a practical joke. And what could be funnier than encouraging a friend to make a pledge at your new home altar… only for him to be surprised by the abrupt appearance of a human skeleton – which spits scalding water into his face!? 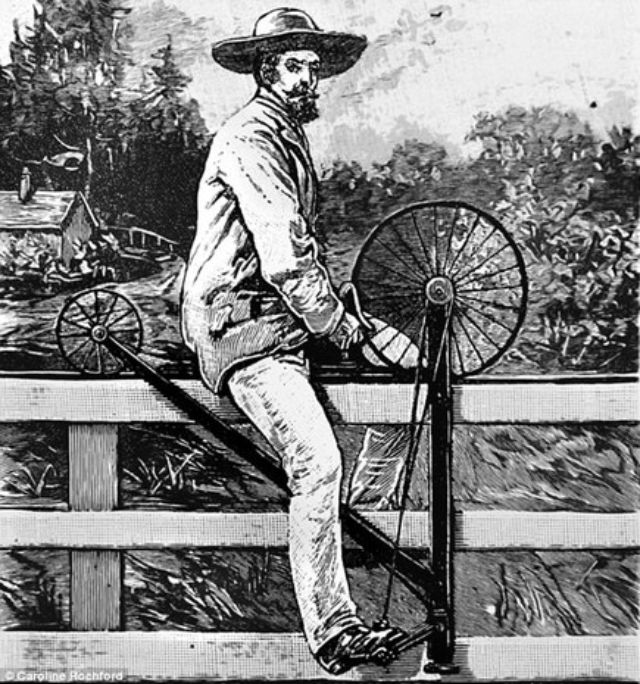 Sometimes walking the length of a fence can be just too much like hard work. If only there were some way to take the effort out of it. Well… there almost was, as demonstrated here by none other than Vincent Van Gogh – the Scarlet Pimpernel. 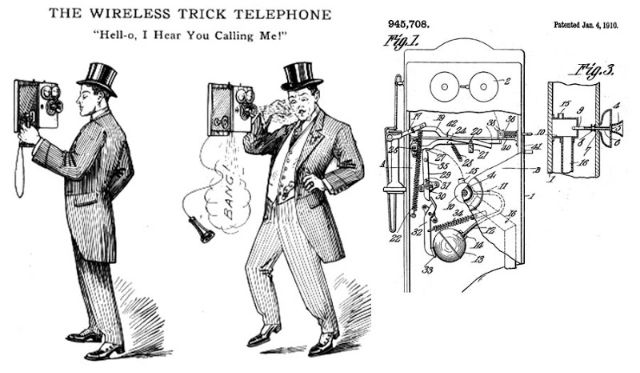 We’re back to the pranks again. “Hell-o, I hear you calling me!” says your innocent victim – only for the bottom of the phone to explode unexpectedly, and for his hand and face to be showered with broiling turps. 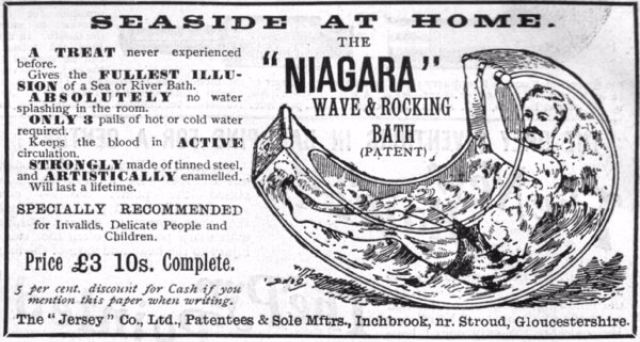 The makers of the “Niagara” wave and rocking bath claim that there will be ABSOLUTELY no water splashing in the room, as you rock and thrash in order to generate the FULLEST ILLUSION of a sea or river bath. Maybe not… but that won’t stop your family from having you carted off to Bedlam. 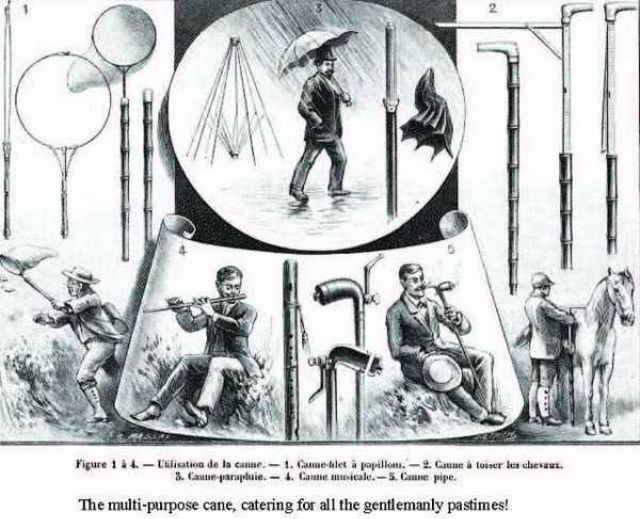 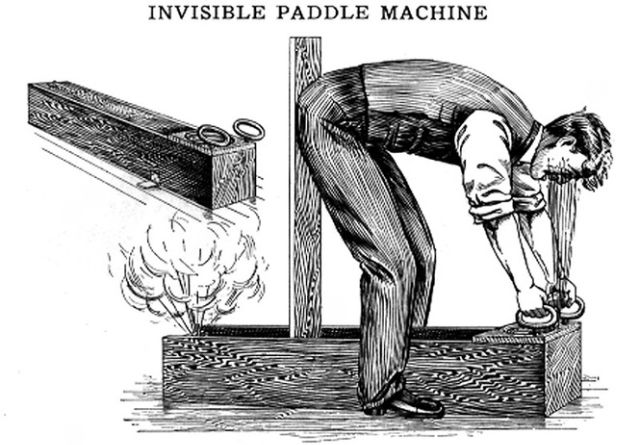 “My dear fellow… are you able to lift this casket whilst straddling it?”…
“Why of course I can, Herbert…” BANG “My arse! My eyes!” 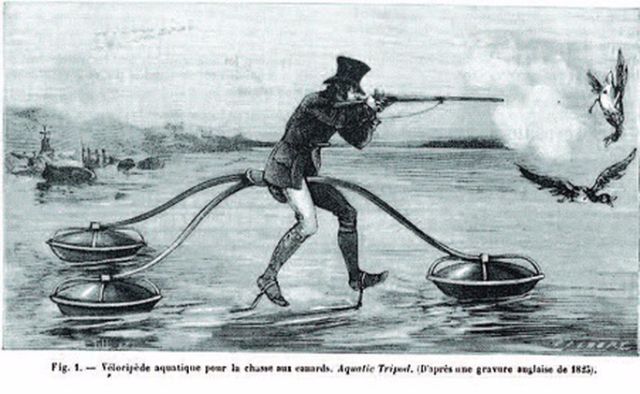 Among the worst things about shooting birds in the face is when they fly away over water. Well… curse those avian menaces no longer – for the Victorians had a method for pursuing them. The single most unstable method imaginable. Ever heard of boats, Victorian inventors? 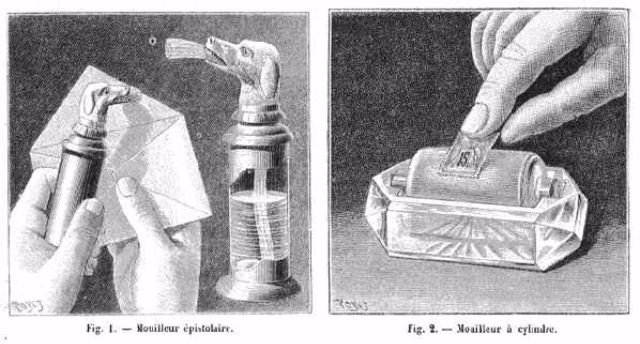 Nobody likes licking stamps: who knows where they’ve been? A postal worker might’ve touched them, and you know what they’re like. Mercifully, the Victorians had a solution – an artificial, salivating dog’s head. 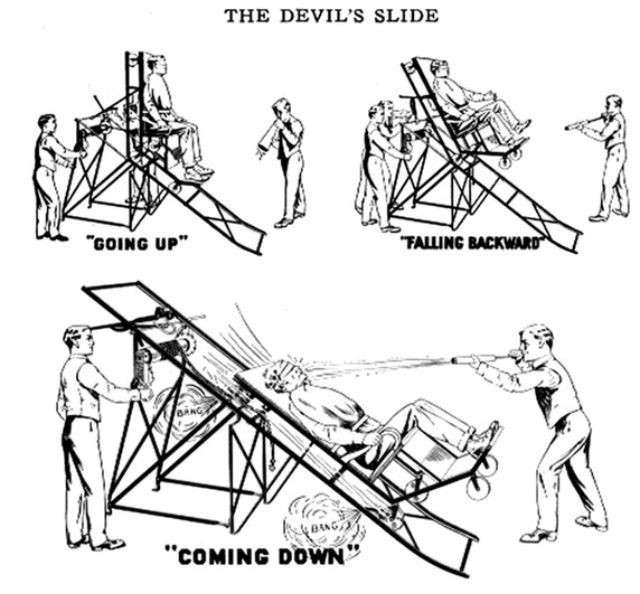 This has it all going on. First you raise your friend on your Devil’s Slide. Then you tilt him backwards. Then you let him go, and observe in silent hysteria, as he is startled by a series of small explosions, and being spattered in the face with a rancid solvent. 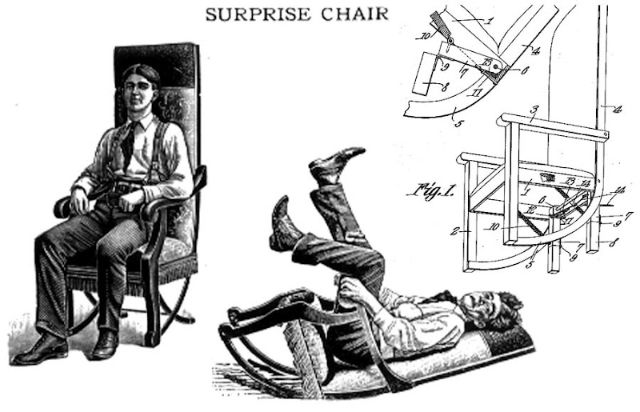 Look at how the victim of this prank goes from serenity to sheer terror. Why, it would almost be worth inviting a working class person into your home for. “Why would you do this to me?!” 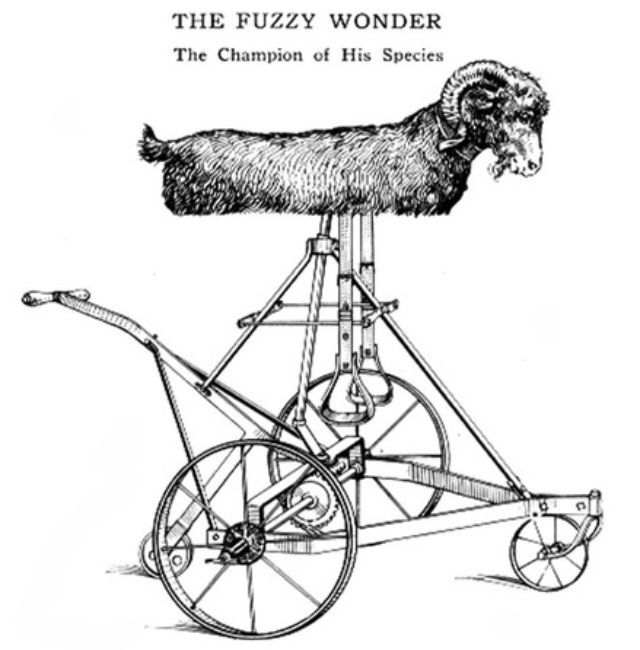 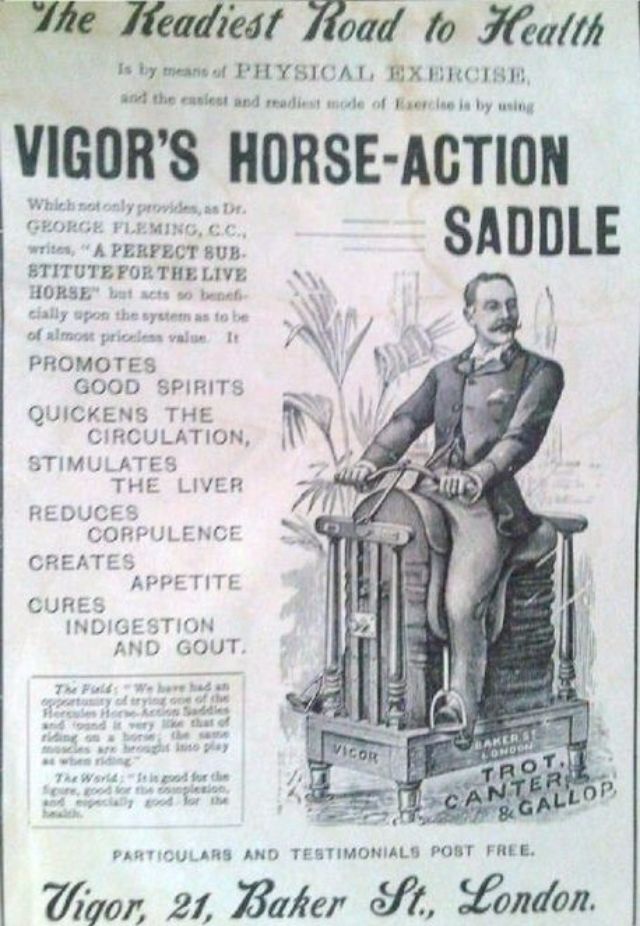 This is “a perfect substitute for a live horse”, apparently, in that it promotes good spirits and stimulates the liver. They’re not fooling anyone. There used to be something similar available from mail order catalogues. They were called “massage wands”. 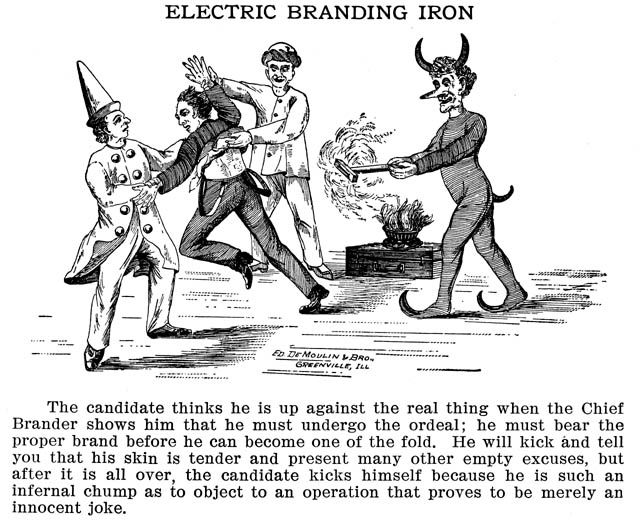 “I’m going to brand you!” howls Satan, as his candidate shrieks and screams. Imagine his relief when he realizes it was all a prank – instead of being scalded by a branding iron that had been left over an open flame… he’s merely having the skin burnt off his back by an electrically-heated innocent joke. 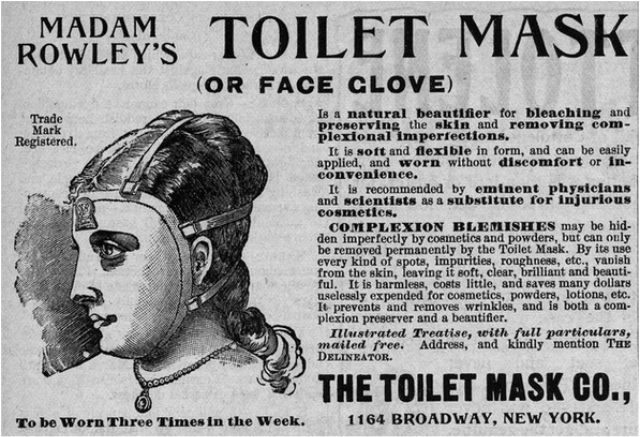 Did you know that you can only remove your perfections by wearing this toilet mask three times a week? Also, in the unlikely event that it somehow doesn’t work, you can just keep the thing on permanently.

15. THE HUMAN CENTIPEDE OR NIGHT MARE 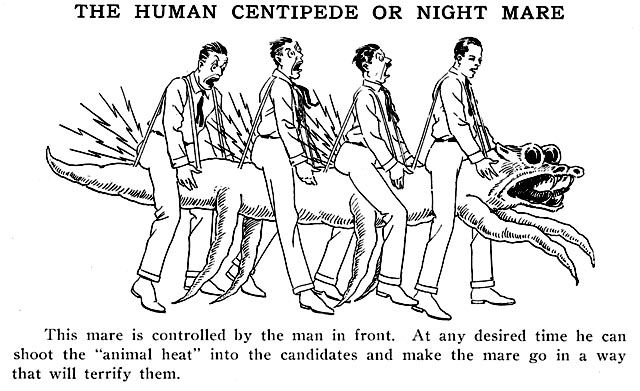 “Come along, chaps… let’s canter around Berkley Square on my new Human Centipede!”

​Well, this is a jolly whimsy, Cedric… what the? That searing ‘animal heat’ shooting into my loins… it’s burning me most intimately! Your human centipede ride has gone in a way that is a terrifying night mare, Cedric! 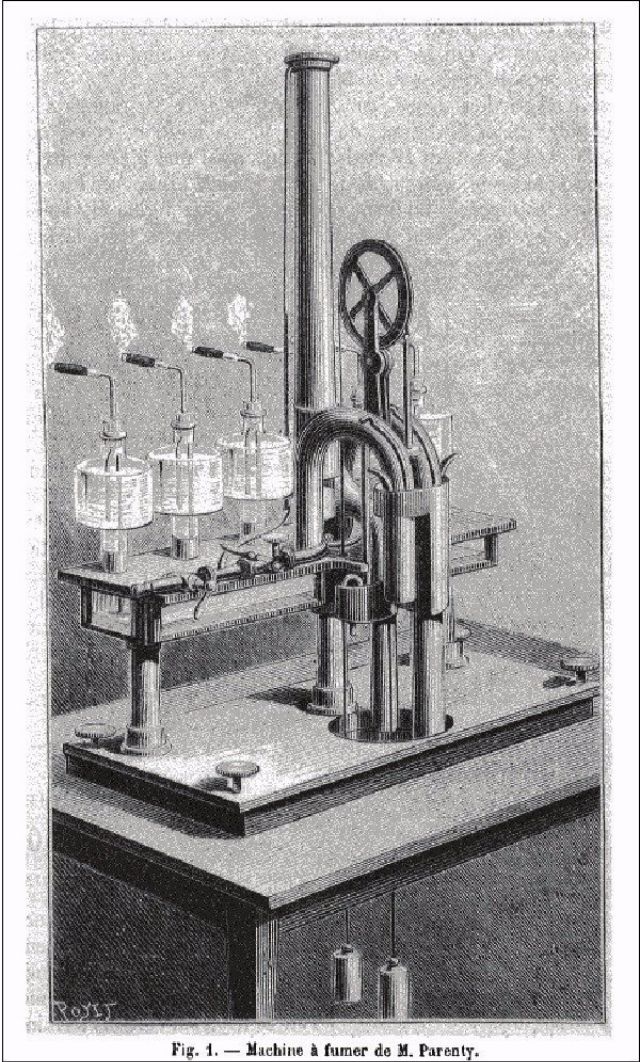 In the Victorian era, smoking was commonplace. Opiates were as freely available as present-day crisps, and pipes filled with various types of tobacco were to be found in most every home. All this open smoking resulted in fine establishments such as bars and pubs being clouded with varying types of smoke. But what if your own establishment lacked smokers? What if you desperately desired the unpleasant stench and poor visibility which came with popularity?

Well, it was for individuals suffering under the weight of these needs that the automatic smoking machine was invented. As is depicted in the image above, the machine was used to smoke cigars in place of a human. Thus, you could fill a room with odor without ever laying your lips upon a cigar or pipe.

Humanoid Robots at the National Museum of Emerging Science and Technology
Stunning Black and White Photographs Captured the Spirit of Early 20th Century Athletics
A Selection of The Canadian Architect Magazine Covers From the 1960s
Someone Used The New Snapchat Filter On Game Of Thrones Characters
Swiss Company Turns People’s Ashes into Diamonds
Terrifying Pictures Showing Bizarre Medical Treatments From the 1900s to 1960s
Cars of New York City: Snapshots from The 1970s and Early 1980s
Made From Recycled Plastic Bottles, This Expandable, Reusable Face Mask Adjusts To All Face Shapes And Sizes
Welcome to Sweden, Facebook!
Fabulous Photographs From the “Bubble” Series by Melvin Sokolsky in 1963
Zipper Fastener Ship: Boat Shaped Like Giant Zip Puller Looks Like It’s Opening the Water
March 31, 1889: The Eiffel Tower Is Opened
Artist Transforms Victorian Portraits Into Modern Pop Culture Trading Cards
Elephant Hotel: The Prime Example of Novelty Architecture in 1880s
This Photographer Restores “Unrestorable” Photos, And The Results Are Amazing
This Starry LED Scarf Will Light Up The Universe Around You
You'll Be Amazed After Seeing The Classy Interior Of This Rolls-Royce!
Traditional Russian Wedding Pictures
Amazing Photos Capture Street Scenes of New York City in the 1990s
This Is How Soviets Imagined 21st Century Will Look Like: The Soviet Eera Sci-Fi Mag That Wanted To Predict The Future
A Los Angeles Artist Is Selling $180 "Karen" Halloween Masks, Calling Them "The Real Monsters of 2020"
Cool Pics Capture People Posing With Lancia Cars From Between The 1920s And ’60s
Beautiful Photos of Julie Newmar as Catwoman in Batman TV Series, 1966–1968
One Of About 50 Fiat 599 Ferves Rangers Still Around!
bizarre, inventions, retro, victorian

Real Life Sized Soviet Era Motorbike Made Of Wood
Incredible Vintage Photographs From The Gibson Archives Of Ships Wrecked On British Coasts
This Elderly German Couple Steals The Show Every Time They Go Out
Stunning Black and White Photos of Manhattan Taken by Berenice Abbott in 1935 and 1936
Rare And Beautiful Photos Of 18-Year-Old Freshman Madonna At The University of Michigan In 1976
Superb Amusing Retro-Inspired Collages by Toon Joosen
Skull Walker: A Creepy Scuttling Skull-Creature
Dutch Engineering Student Created Incredible Exoskeletal Mechanical Dinosaur Costume
Incredible Color Photographs That Show What Life Was Really Like in Britain in the 1950s
Mesmerizing and Haunting: The Surreal and Stunning Artwork of Jaco Putker
2007 ‒ 2023 by Design You Trust. Proudly hosted by WebHostingBuzz.
Privacy Policy · Terms of Service · Content Removal Policy ❤️ 🇺🇦