The winning images, taken by international ecologists and students, celebrate the diversity of ecology; capturing flora and fauna from across the planet. Subjects range from the hypnotic textures of a birch forest, to a three-toed sloth making its way across a road, to a Southern white rhinoceros receiving its annual horn trimming to help protect it from poachers.

On his winning image, Roberto, a postdoctoral researcher at the University of Valencia, said: “Unfortunately, many areas of Madagascar are suffering huge anthropic pressures including poaching and fires, and big snakes are becoming increasingly difficult to see. During my visit to Madagascar, I had the pleasure of finding this outstanding snake and photographing it. To offer a dramatic scenario reflecting the conditions that these snakes are suffering, I used an external red light as a source of light and severe blurring to capture the environment.” 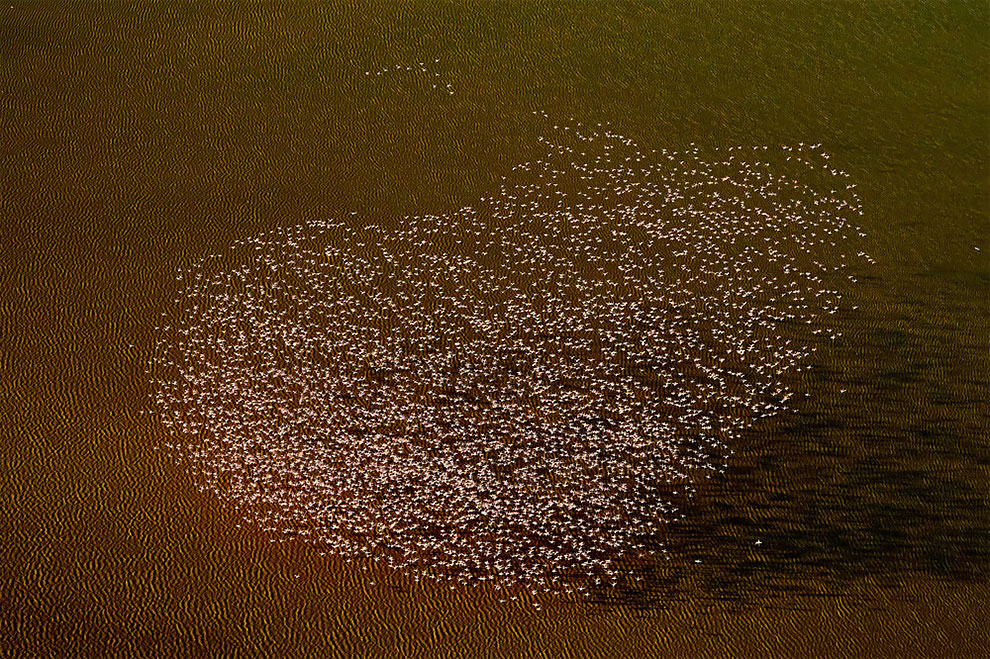 The Art of Ecology category winner: For the love of Flamingos by Peter Hudson (Penn State University), taken over Lake Magadi, Kenya. “A flock of flamingos fly high over Lake Magadi in a heart shape. Flamingos are all legs and necks but at the same time graceful and fascinating and I admit I have a deep passion for them, so I was thrilled when, flying high over Lake Magadi, I watched this flock form themselves in to a heart shape”. (Photo by Peter J. Hudson/2019 British Ecological Society Photography Competition) 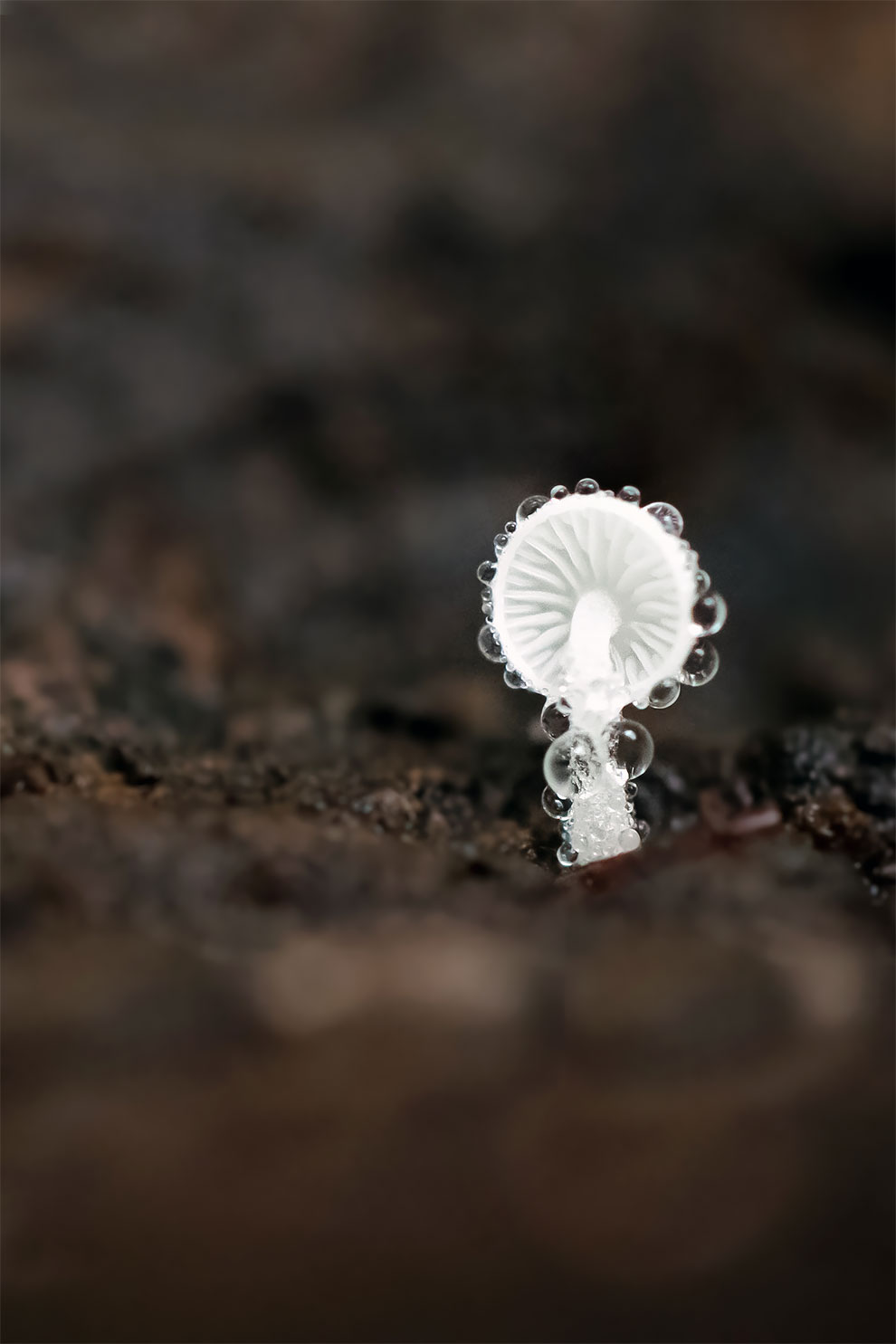 The Art of Ecology category student winner: Teeny tiny world by Sanne Govaert (Ghent University), taken in Belgium. “This tiny mushroom, a Mycena spp, was growing inside a rotten tree trunk. Due to the microclimatic conditions inside the trunk, condensation had formed on the Mycena. Mycenas feed on dead wood and litter, so I could move the mushroom attached to the bark so I could easily photograph it”. (Photo by Sanne Govaert/2019 British Ecological Society Photography Competition) 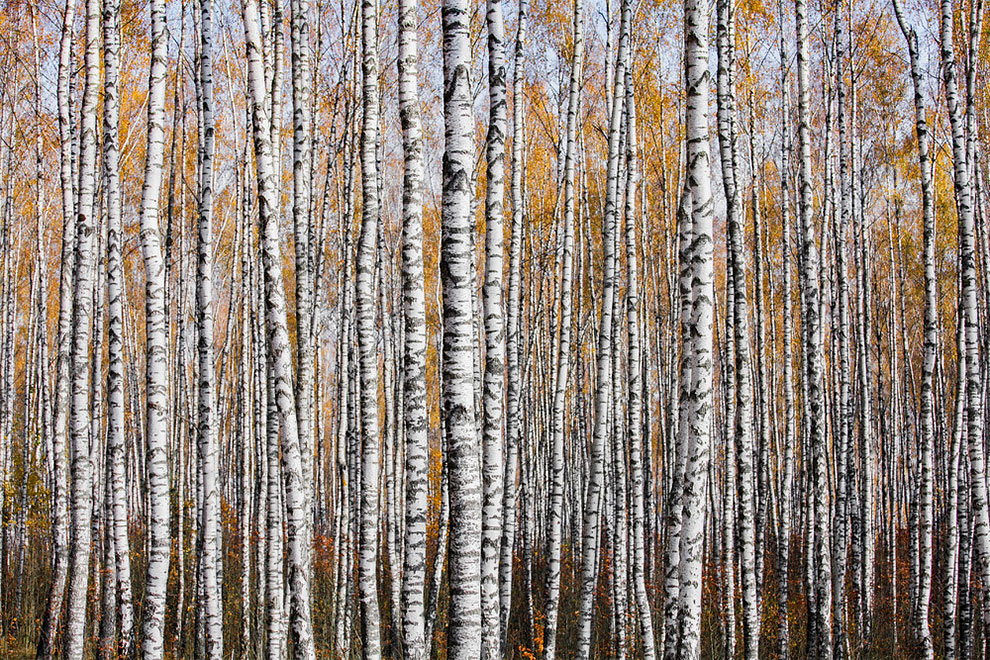 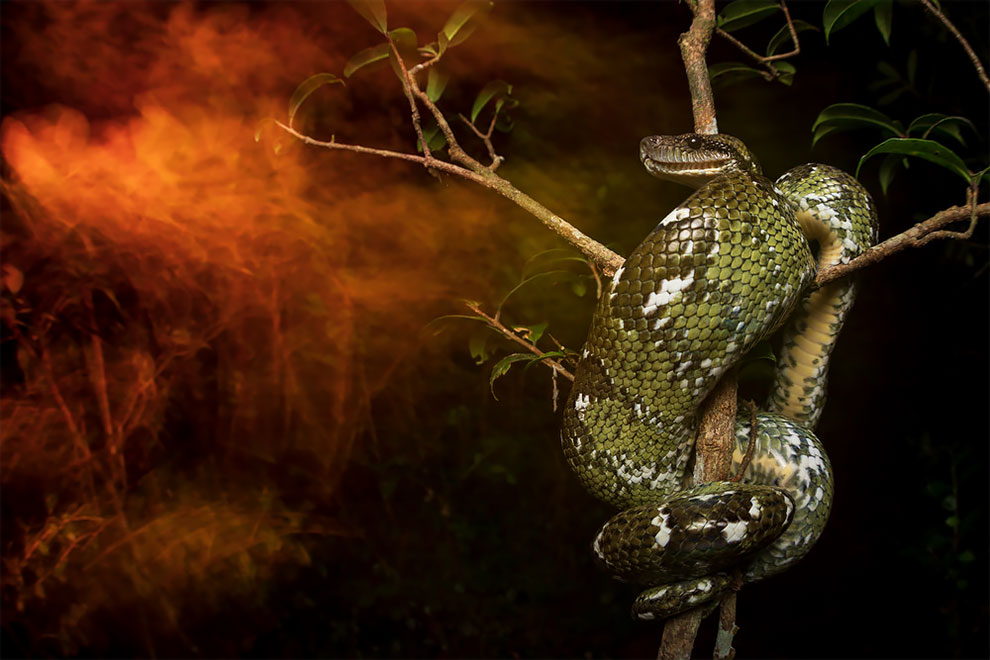 Overall winner: Red night by Roberto García Roa (University of Valencia), taken in Madagascar. “A Malagasy tree boa perches in a tree. The Malagasy tree boa (Sanzinia madagascariensis) is a non-venomous snake species endemic to Madagascar. Large individuals have become difficult to find in some areas surrounding human settlements. Fires produced by humans and poaching are only some of the threats faced by the snakes”. (Photo by Roberto García Roa/2019 British Ecological Society Photography Competition) 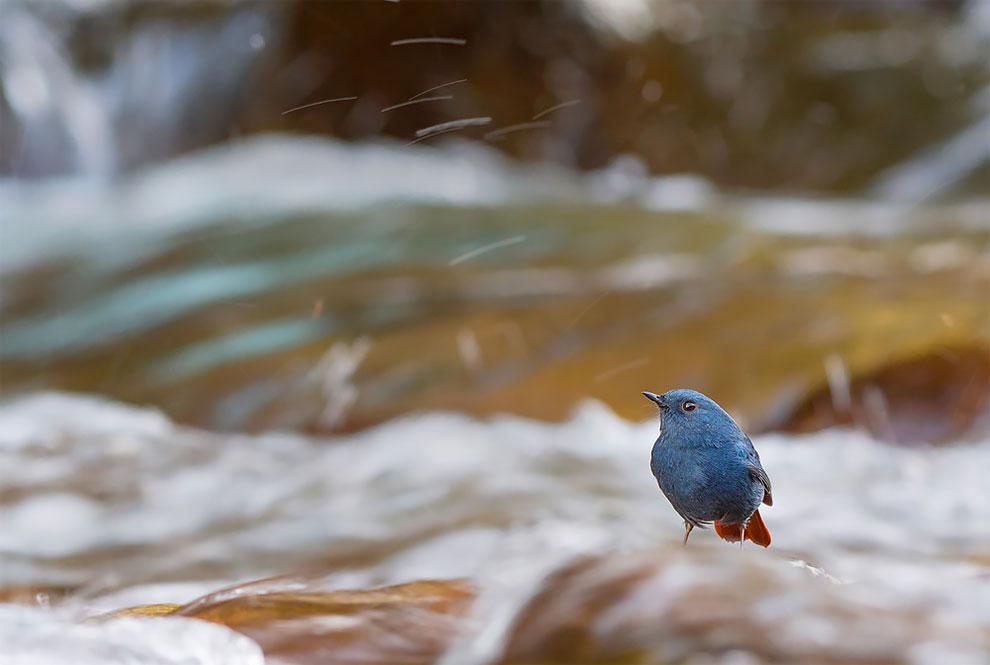 Overall student winner: Flames in flumes by Nilanjan Chatterjee (Wildlife Institute of India), taken in Rishikesh, India. “A plumbeous water redstart waits by the cascades to catch a mayfly or stonefly for a meal. River birds are one of the most specialist group of birds and depend on rivers to live. Numerous dams have threatened the flow of the river”. (Photo by Nilanjan Chatterjee/2019 British Ecological Society Photography Competition) 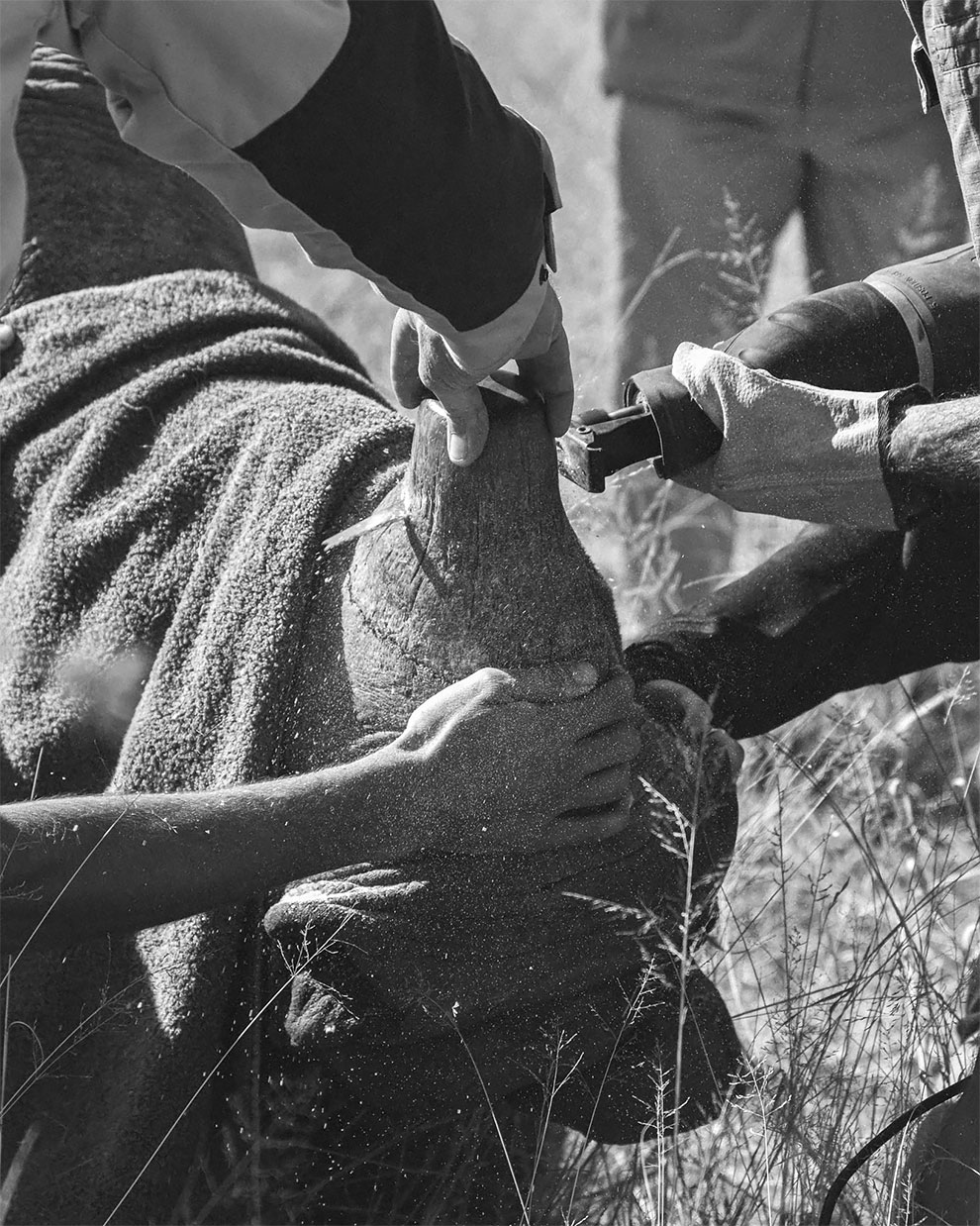 Ecology in Action category winner: Rhino’s Annual Haircut by Molly Penny (University of the West of England), taken in South Africa. “During my stay in South Africa, I was fortunate enough to be involved in the horn trimming of four southern white rhinos. Rhinos have their horns trimmed to help prevent them being killed. It was an amazing experience and one I will never forget”. (Photo by Molly Penny/2019 British Ecological Society Photography Competition) 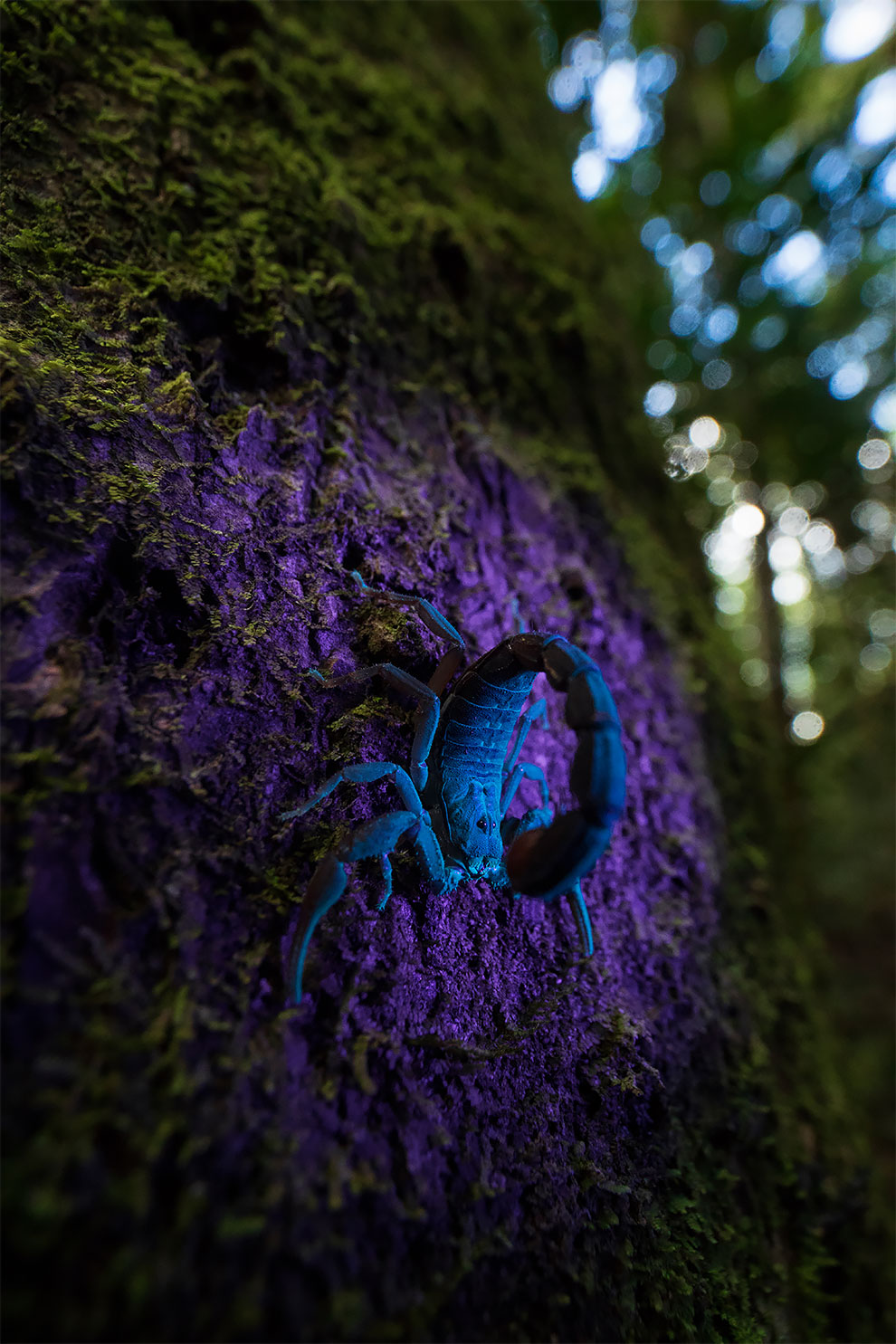 Up Close and Personal category winner: Fluorescence by Roberto García Roa (University of Valencia), taken in Madagascar. A small scorpion glows under UV light. The function of fluorescence is still unclear: it is a biological phenomenon that ranges across kingdoms, from bacteria to animals. (Photo by Roberto García Roa/2019 British Ecological Society Photography Competition) 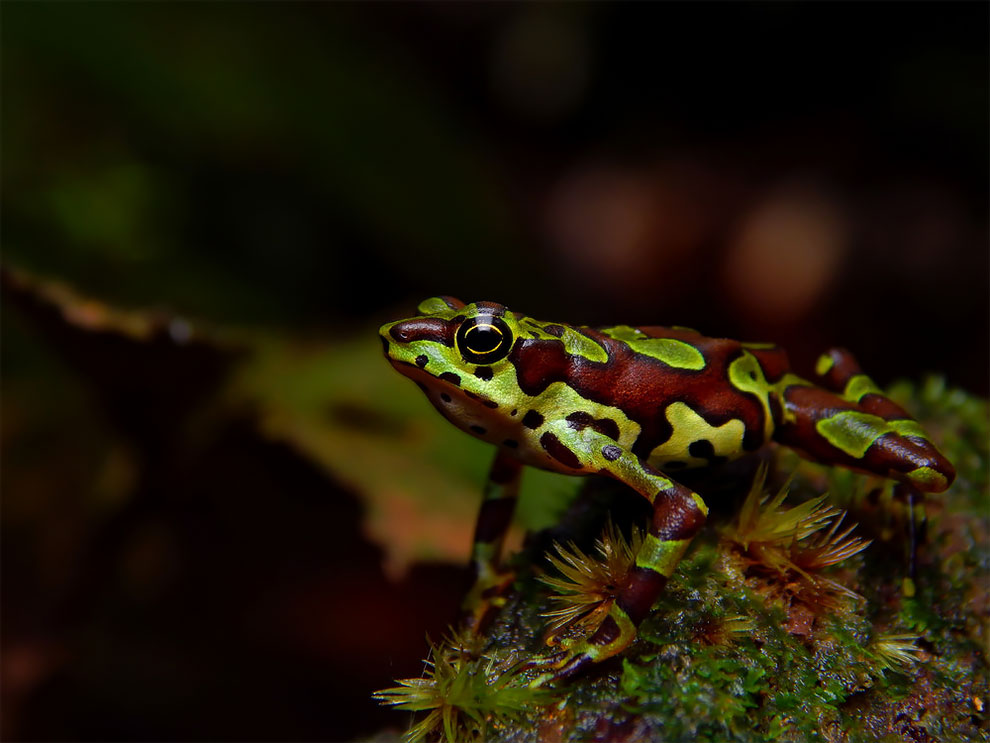 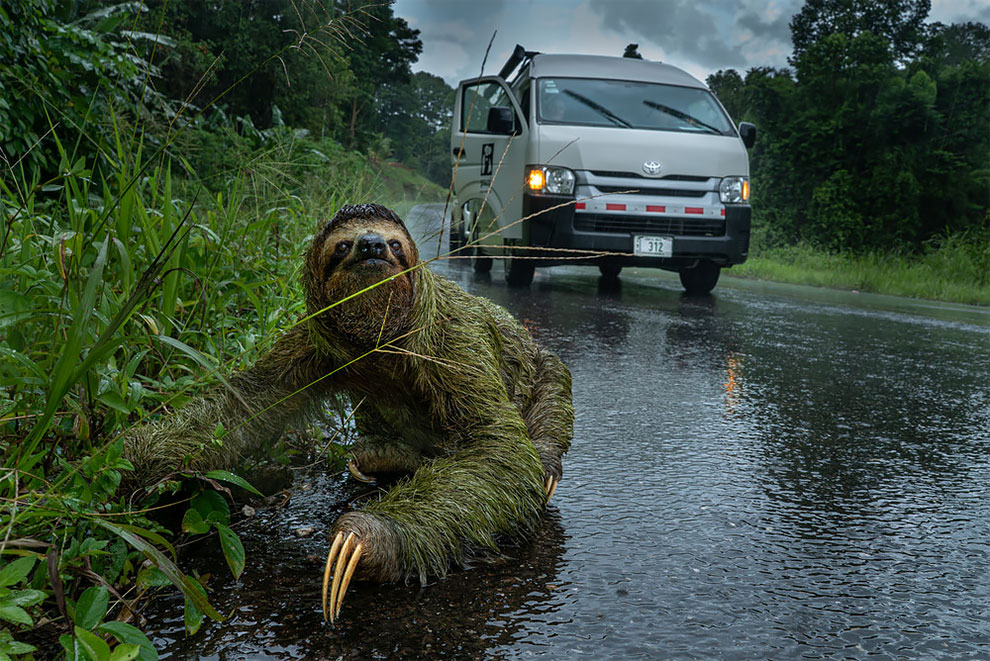 People and Nature category winner: Why did the sloth cross the road? by Andrew Whitworth (Osa Conservation and University of Glasgow), taken in Osa Peninsula, Costa Rica. “I was driving out from the Osa Peninsula, located on the southern Pacific coast of Costa Rica on a dark, stormy day. This female three-toed sloth (Bradypus variegatus) had luckily just about made it across the road, and the drivers of the Toyota on this occasion had spotted her in good time”. (Photo by Andrew Whitworth/2019 British Ecological Society Photography Competition) 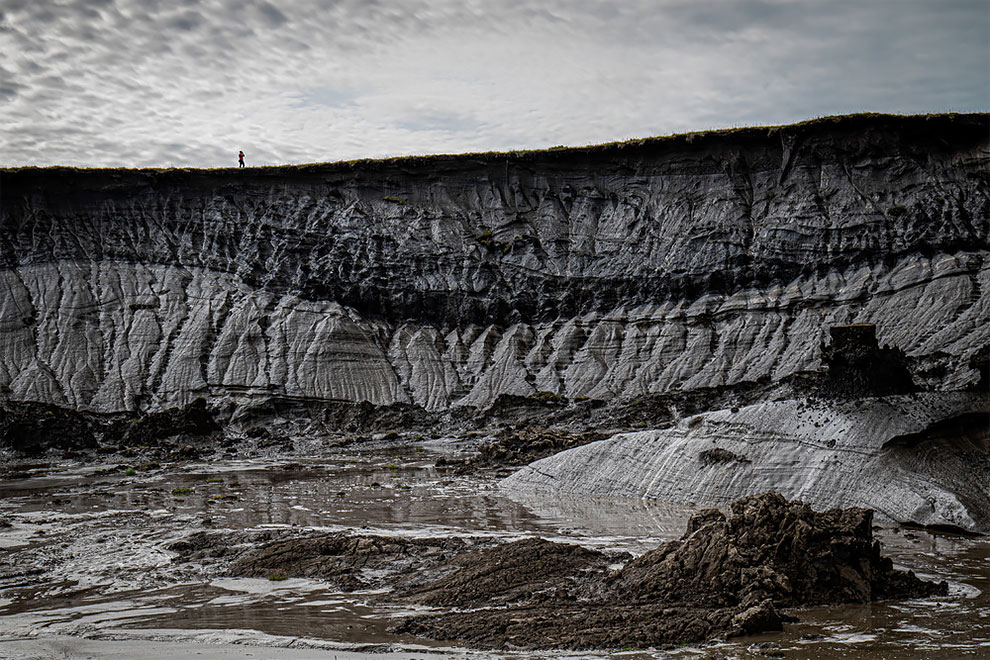 People and Nature category student winner: Thawing away by Gergana Daskalova (University of Edinburgh), taken on Qikiqtaruk-Herschel Island, Canada. A human silhouette is dwarfed by the size of a retrogressive thaw slump on Qikiqtaruk-Herschel Island in Canada. The shifts resulting from these slumps can echo through the whole ecosystem. This photo was taken on an expedition supported by the National Geographic Society. (Photo by Gergana Daskalova/2019 British Ecological Society Photography Competition) 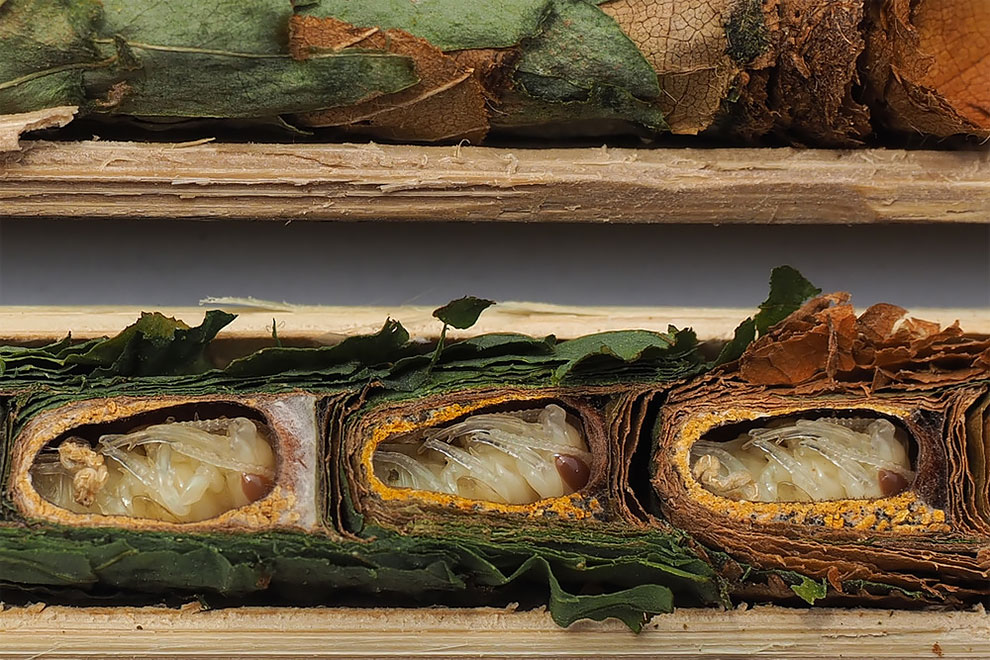 Individuals and Populations category winner: Sleeping Still by Felix Fornoff (University of Freiburg), taken in Germany. Leafcutter bee offspring in nests made from ovate leaf cuttings thoroughly arranged in multiple buffering layers by their mother bees. The pigmentation of the pupas’ eyes indicates the approaching end of metamorphoses and the arrival of the spring of their lives. (Photo by Felix Fornoff/2019 British Ecological Society Photography Competition) Individuals and Populations category student winner: Watchful by Khristian V. Valencia (University of Antioquia), taken in San Cipriano nature reserve, Colombia. A clouded snake (Sibon nebulatus) fixes its gaze on succulent prey. Because of its appearance, it is often confused with other poisonous snakes, but there is no direct threat in its environment for this particularity of imitation; its real threat is humans. (Photo by Khristian V. Valencia/2019 British Ecological Society Photography Competition) 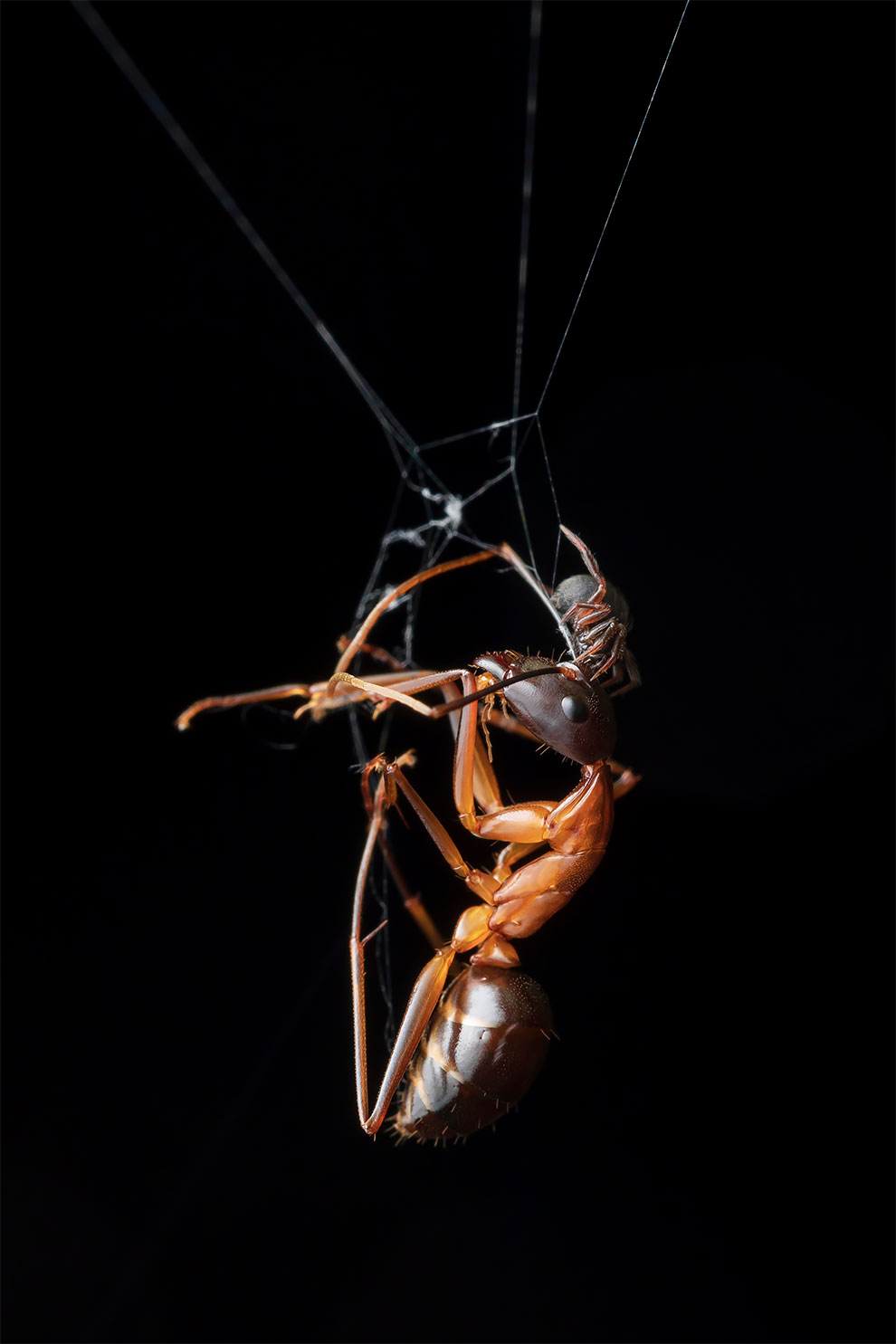 Dynamic Ecosystems category winner: Small warrior by Roberto García Roa (University of Valencia), taken in Malaysia. “Size matters in nature, but not always. Spiders are interesting animals that have evolved different strategies (eg venom or their complex webs) to cope with the problem of being smaller that their prey or predators. As an example, this tiny spider I found in Malaysia had captured an ant, whose size was much bigger than the spider”. (Photo by Roberto García Roa/2019 British Ecological Society Photography Competition) 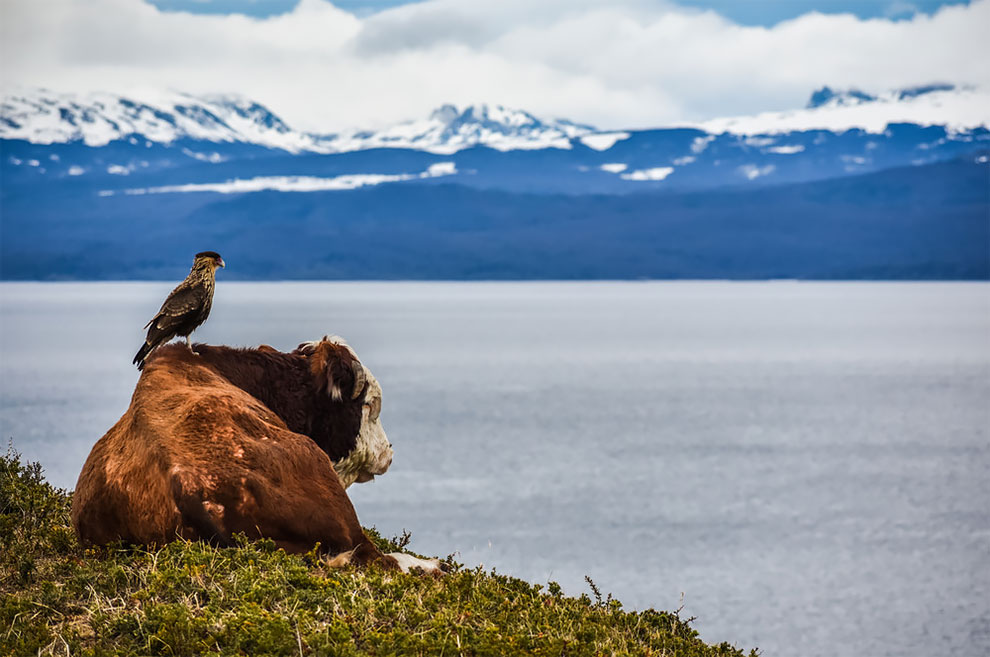 This Photo Was Shot with A Real $2M Lamborghini Taken Apart
Best Photos From 2021 International Wedding Photographer Of The Year Contest
Photographer Puts Bride And Groom On A Tiny Ledge 350 Feet Above A Valley In New Hampshire
Fascinating Photos That Capture Everyday Of Oahu Beaches, Hawaii In The Early 1970s
Instagram’s “Pointless Packaging” Is Both Hilarious And Socially Aware
The Fifty Fifty Selfie Barber Shop
Winners Of The 2020 International Landscape Photographer Of The Year Competition Have Been Announced And They’re Mesmerizing
"Sometimes Blue and Cold, Sometimes Hot and Intense"
Inside Ciccolella, Italy's Leading Producer of Cut Flowers
Extreme X-Rays: Photographer Nick Veasey Takes You Inside The Insects
Fox Tales: Charming Portrait Series By Darja Bilyk
The Mafia's New York: Hideouts, Hangouts and Rubouts
Giant Plants Of The Lost World
Remembering George Harrison 10 Years after His Death
These Powerful Images Capture The Spear-Wielding Tribes Of Papua New Guinea Who Believe They Are Possessed With The Spirit Of The Crocodile
Traditional Russian Wedding Pictures
Dad Creates A Springtime Pregnancy Photoshoot Parody
The Winners of the Luminar Bug Photography Awards 2020 Have Just Been Announced
"Into The Wildlands Of Finland": Dreamlike Animal Portraits By Joachim Munter
12-Year-Old Christopher Walken In Clown Makeup Will Make You Hate Clowns A Little Less (Or Will It?)
Incredible Winning Photographs From The 2020 International Photography Awards
"The Owls Are Not What They Seem": Magical Pictures Of Owls By Daniel J Nevares
"Skeleton Flowers" Turn Beautifully Transparent in the Rain
Pics From 2022 Beard & Mustache Championship That Showcases Next-Level Facial Hair
contest, ecology, winners