Anonymous Hero Is ‘Protecting’ Graffiti Penises By Painting Condoms Over Them 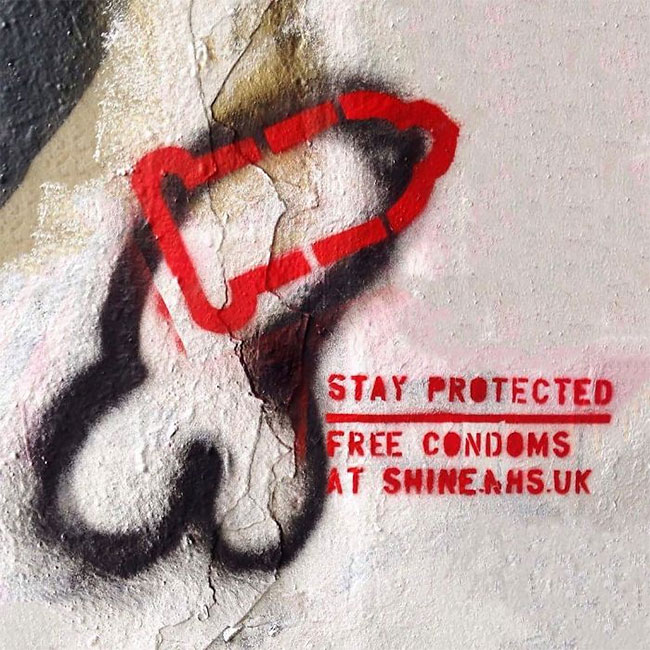 An anonymous street artist is doing a noble service to the many graffiti penises of London – by spray-painting condoms on top of them. It’s pretty hilarious, but it also sends an important public health message which we’re sure even the original authors of the graffiti would be cool with.

Protect City Cocks, as the campaign is now known, started when an art director (whose name is undisclosed) noticed the shocking amount of unwanted penis drawings scattered across London’s walls. 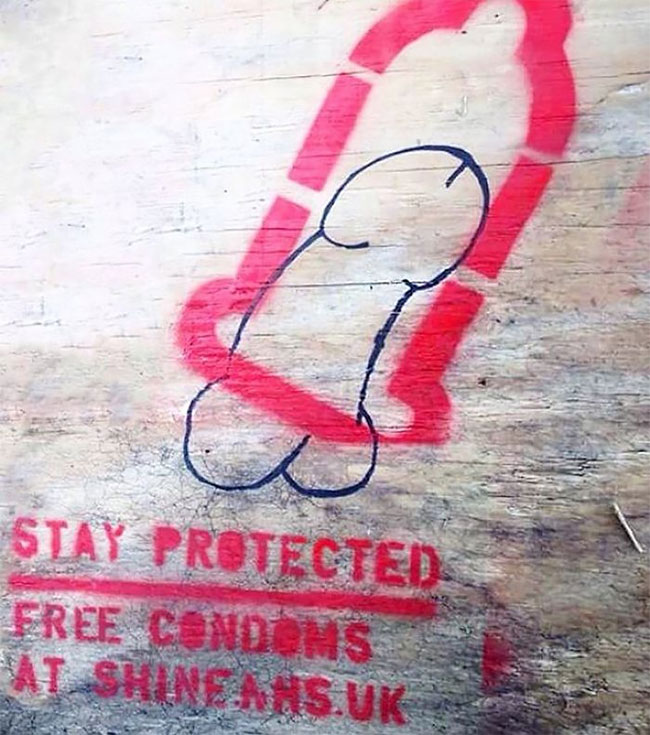 They confronted him, they made him dig deep inside his soul, and eventually, they inspired him to turn them into something meaningful. “I then started to go out like some kind of heroic super-sex-hero protecting these unprotected graffiti penises,” he wrote in a blog post for Campaign Magazine. In addition to the condoms, he also includes a link to a UK sexual health website where free condoms can be attained. 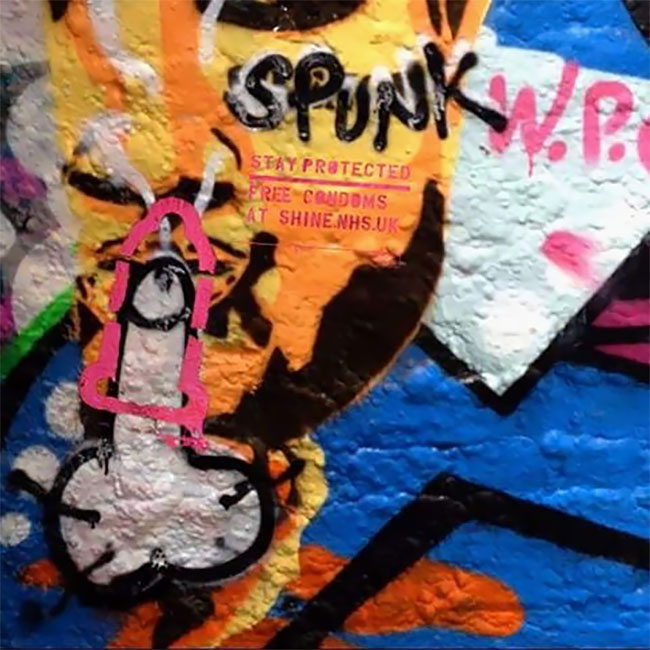 Over 100,000 new cases of sexually transmitted infections are detected every year in London, a statistic Protect City Cocks hopes to aid in curbing. 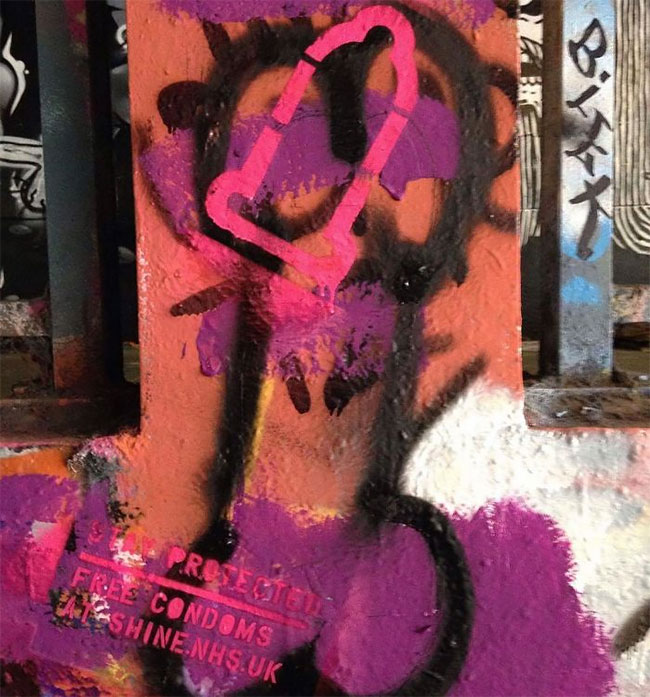 “I wanted to convey the importance of this message while connecting with society in an entertaining, engaging and truthful way,” he wrote. 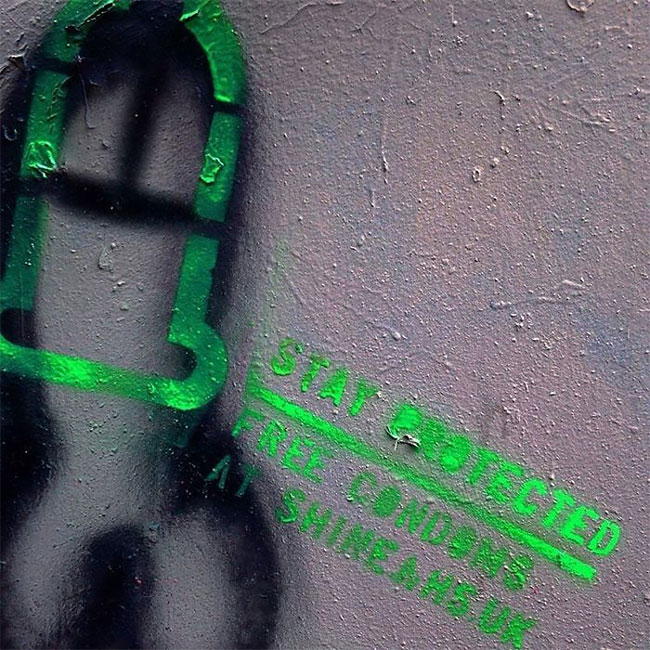 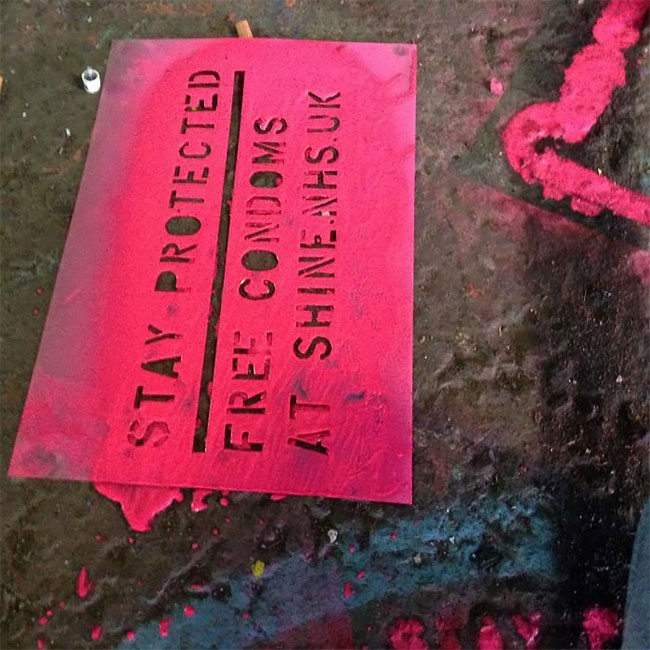 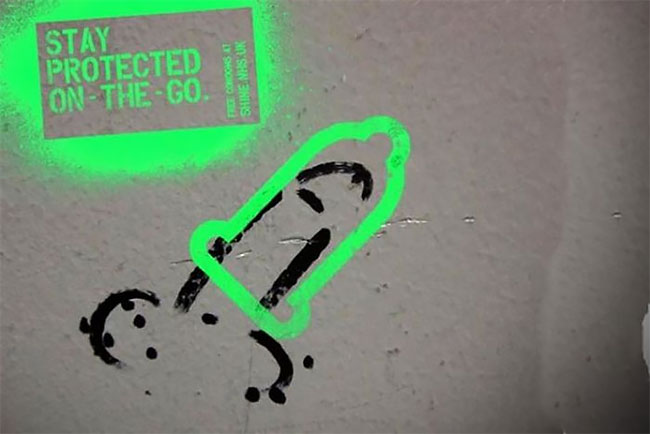 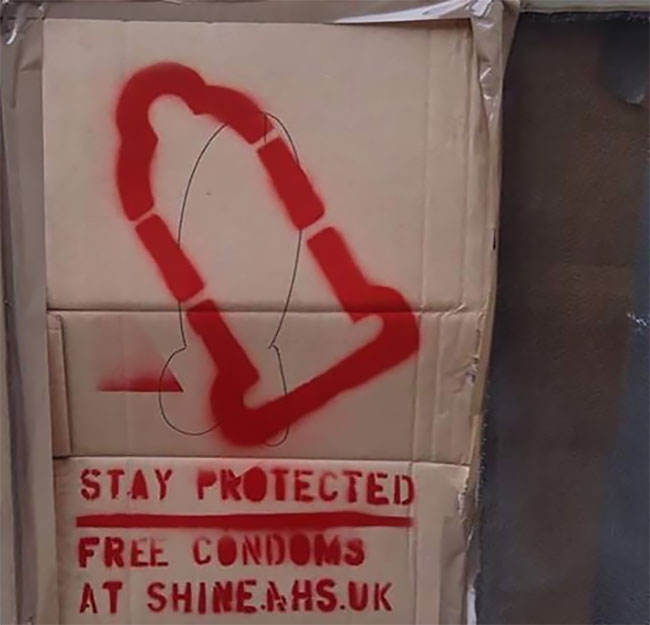 First Model Ever Who Has Different Colored Eyes
The Best Signs From The 2018 Women’s March
Mullet: The Badass Hairstyle Of The 1970s, 1980s And Early 1990s
Artist Makes Animal Dolls Out Of Faux Fur, And It’s Both Ethical And Cut
This Virtual Avatar-Girl Takes Over Instagram Posing As Regular Influencer
Meet Dave: He Has Been Drawing Dad Jokes And Puns On His Daughters’ Lunch Bags For 8 Years
American Woman Celebrated Getting A Job With A Romantic Photoshoot
Illustrator Reimagines Famous Fast Food Brands As Manga-Style Characters
Artist Continues to Create Illustrations Show What Famous Characters Would Buy at The Supermarket
An Artist Reimagined Her Life As A Potato In Cute Sad Comics
This Artist Creates Thought-Provoking Illustrations About Modern Day Issues
Artist Creates Living, Breathing Paintings. This Is Anything But Normal.
There’s a Tumblr Entirely Dedicated To Photoshop Paula Deen Riding On Things
"Canvas, Oil & Cat Memes": Norwegian Artist Paints Pictures With Popular Cats On The Internet
Chinese Village Turns Artsy With Murals
Artist Andrew Myers Creates Amazing Portraits Built From Screws
Can We Fall Asleep And Dream Within A Dream? Surreal Dreamlike Oil Paintings By Henrik Aarrestad Uldalen
Artist Fuses Together The Most Beloved Cartoon Characters, And The Series Goes Viral
This Guy Lost A Job In The Pandemic, Now Focused On Creating His Own Art
The Eyes of Surrealism: Art by Andreea Dumuta
Cyberpunk Gangster: Stunning Works by Korean Artist Gharliera
Shower To The People! Generous Man Turns Old Truck Into Mobile Shower For The Homeless
"Days of Thunder": Atmospheric Cityscape Oil Paintings by Bozhena Fuchs
Feel that Vibes: Indian Artist Creates Superb Fantasy Photo Manipulations
anonymous, condoms, graffiti, painting, penises, protecting

Man Freezes Alongside Icy Painting in Surreal Self-Portrait Sculpture
This Artist Can Sneak Her Cats Into Any Painting And It’s Hilarious
Everyday Objects Inspired An Artist To Illustrate These Bad Puns, Here Are The 30 Best
"Root of All Evil": The Haunting Graphic Design of Album Covers by IDLEMYND
Someone Just Took Vines Out Of The Phone And Put Them On The Streets Of Manhattan
6 Pics That Show What Happened ‘Behind The Scenes’ Of Famous Paintings
The Last Day For Tomorrow Future: Absolutely Amazing Digital Artworks Of Bryn Jones
"Post-Apocalypse Now": Superb Concept Art By Sergey Vasnev
Here Are 20th Century-Inspired Propaganda Posters About The COVID-19 Crisis In The US
Twins Show What Pop Culture Characters Would Dress Like In Real Life
2007 ‒ 2022 by Design You Trust. Proudly hosted by WebHostingBuzz.
Privacy Policy · Terms of Service · Content Removal Policy ❤️ 🇺🇦