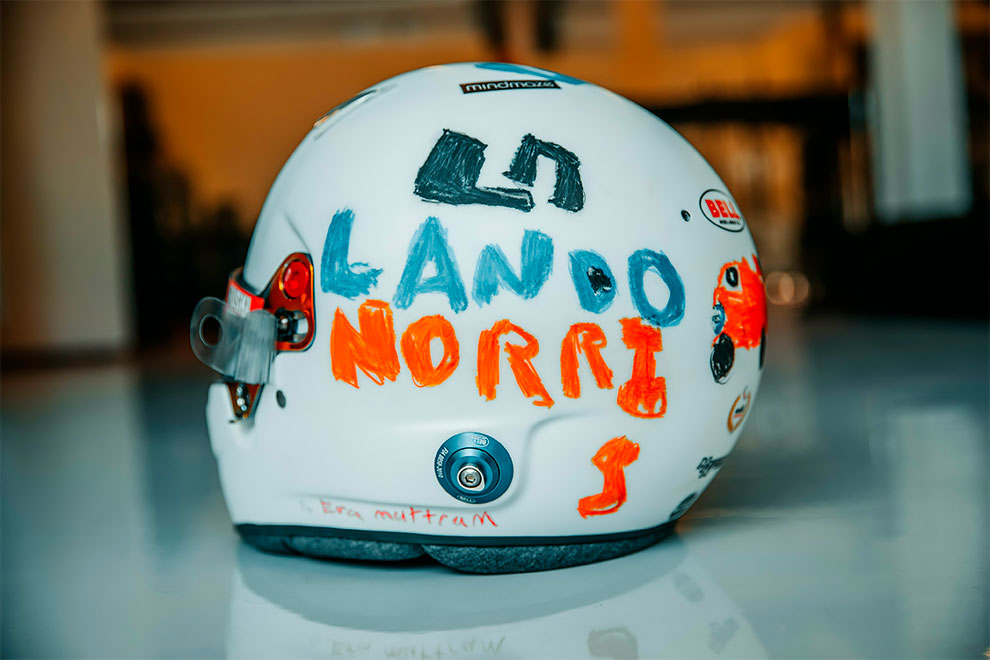 Norris held a special competition in the build-up to his home grand prix at Silverstone, inviting his fans to design his helmet for the weekend. The winning entry came courtesy of six-year-old Eva Muttram, whose father submitted a hand-coloured design on her behalf that was picked by Norris for Silverstone.

“It reminds me a lot of when I was younger, designing helmets, drawing away, just when I was like five, six, seven years old, printing off hundreds of helmet designs, colouring them in and doing whatever,” Norris explained on a Twitch stream revealing the helmet. 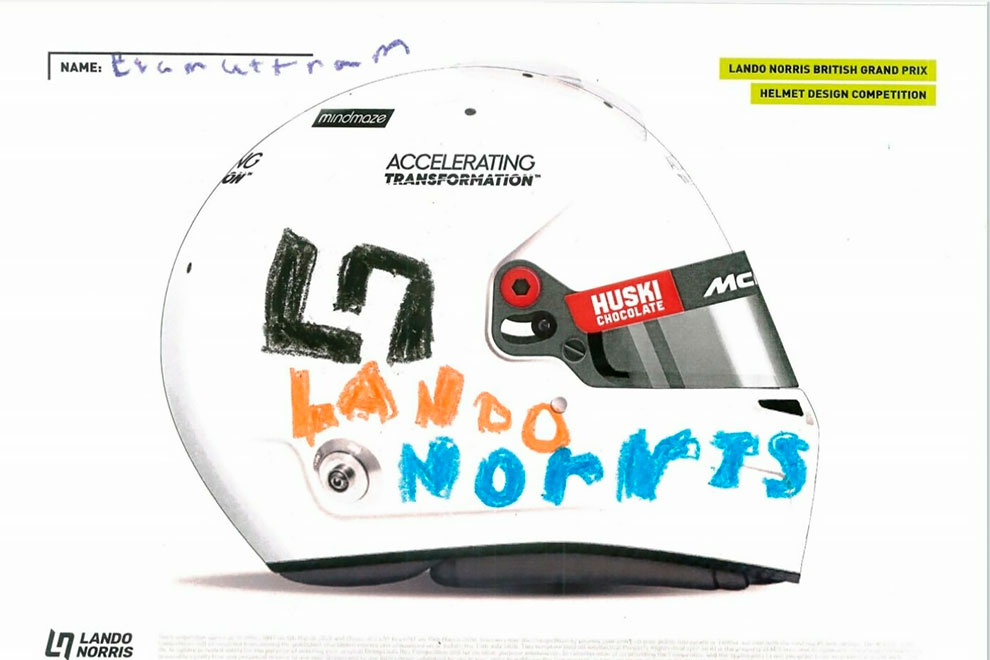 “This is the winner. It’s very different to what I’m used to. All this glitz and glamour and sparkly bits and swooshes and cool stuff, I just went with something that reminded me of me when I was young.” 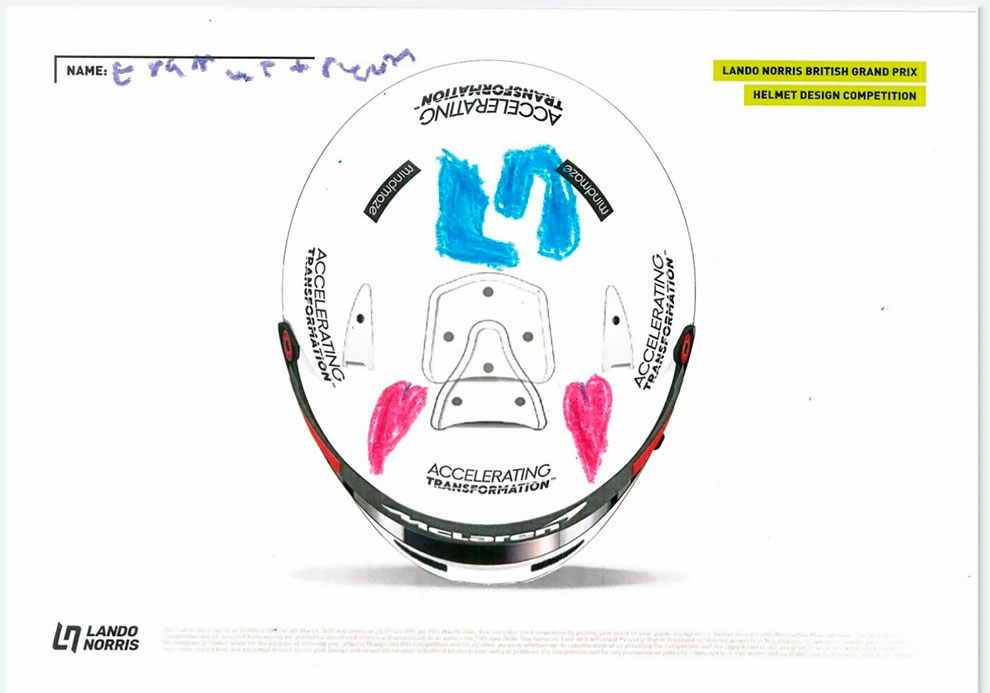 The design features a number of Norris’ personal logos in the McLaren team colours of orange and blue, and two red love hearts. Norris’ name is written in full on the side of the helmet – with the final letter in his surname dropping onto a third line. 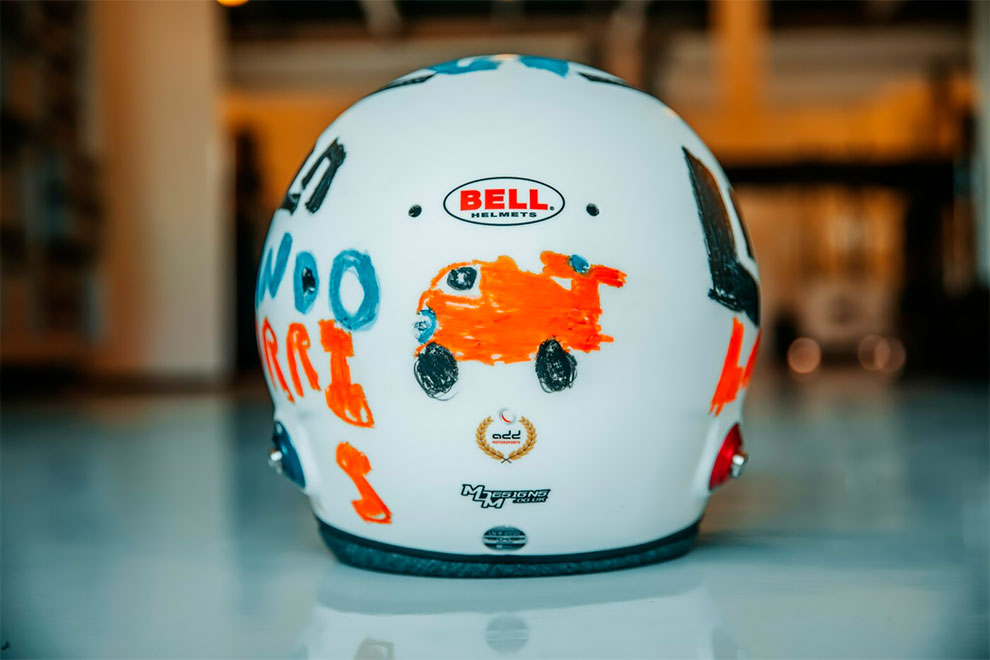 The helmet also has a hand-drawn orange and blue McLaren on the rear of the car, which Norris joked “is what our car looks like this weekend with the new upgrade.” 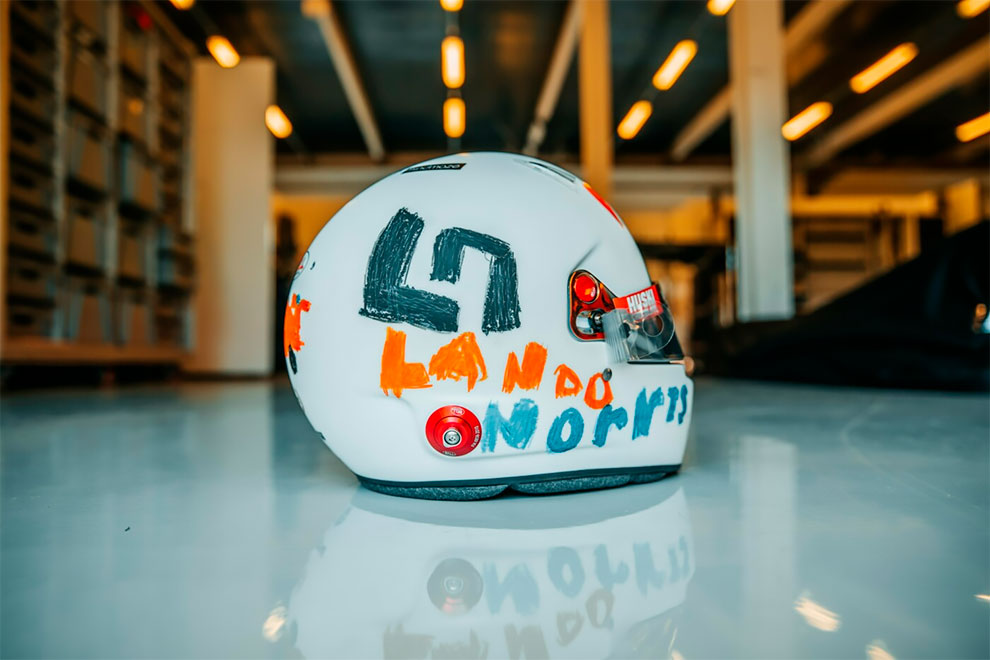 “I love it. It’s a lot of white, but at the same time, I just think it’s really cute,” Norris said. “I like the colours, and it’s very original. Thank you very much Eva.” 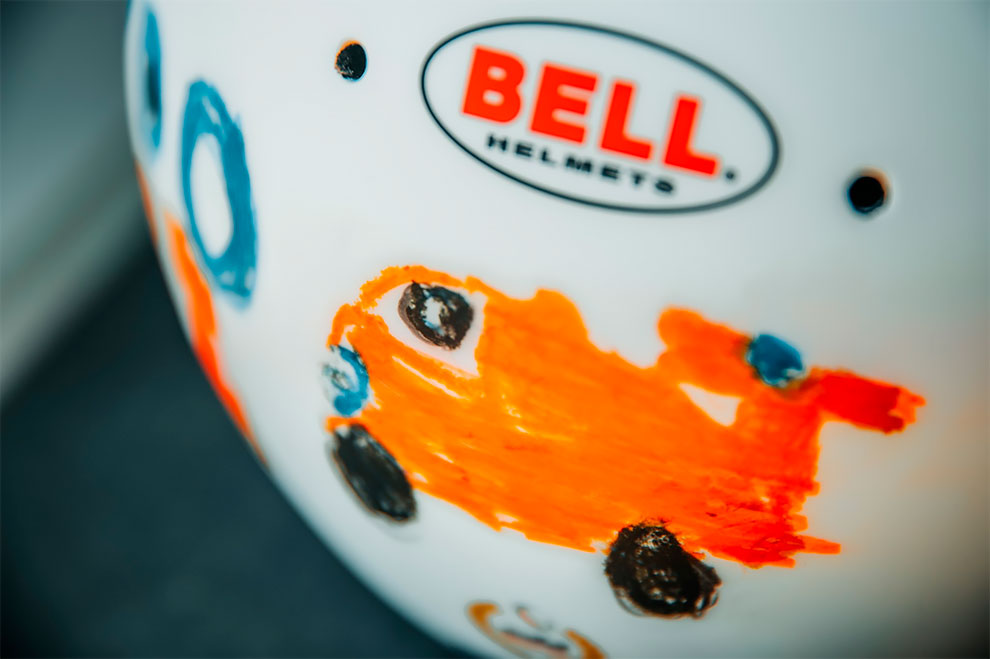 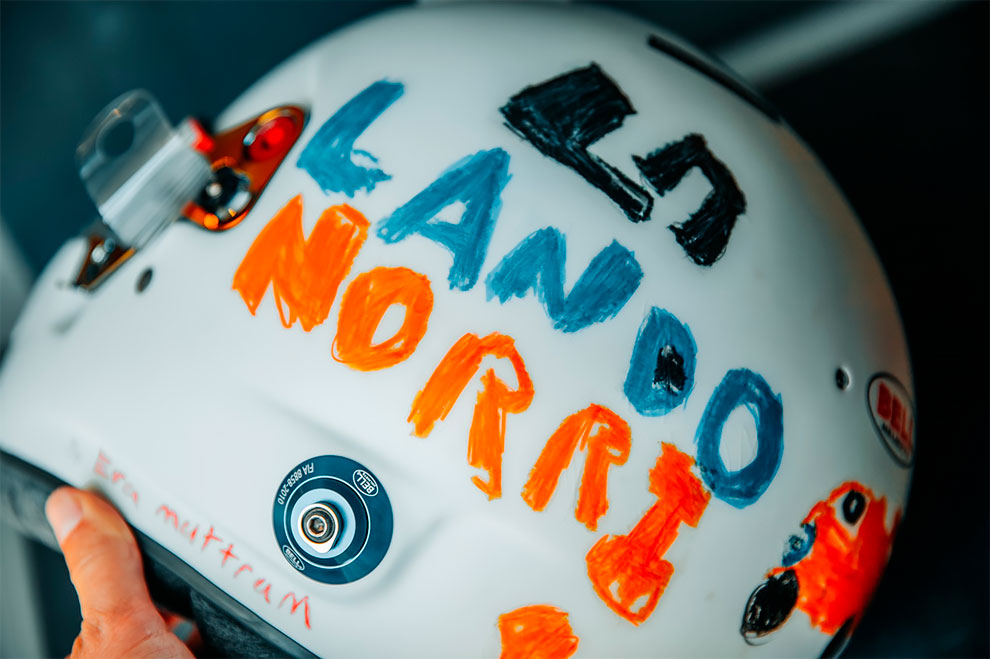 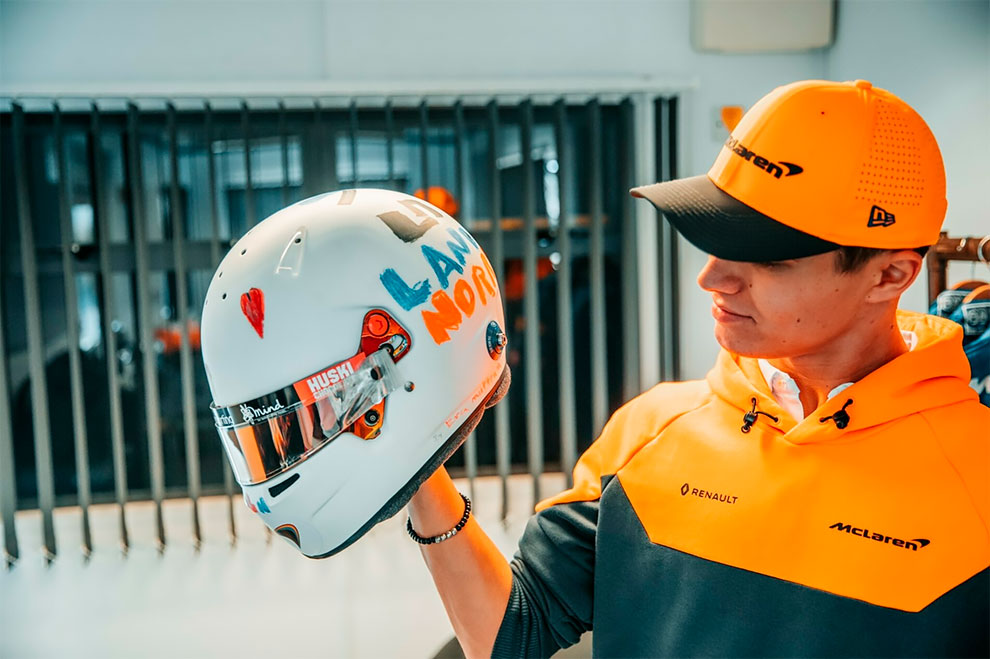 Tom Selleck Photoshopped Into Waterfall Scenes With a Sandwich
Ukrainian Artist Oleg Shuplyak Hidden Figure Paintings Are Breathtaking Optical Illusions
Largest Mural on an Inhabited Building in the World
Designer Challenges Himself To Create Logos With Hidden Meanings For A Year
Seeing spots: Yayoi Kusama Exhibition at Tate Modern
Modern Manga Art By Ilya Kuvshinov
New Wonderfully Witty Animal Comics by Liz Climo
People Are Posting Their Next-Level Quarantine Meals, And Here Are The Weirdest Ones
Wonderful Images That Will Restore Your Faith In Humanity In 2016
Elegant Drawing Of Girls Wearing Dresses Made Of Real Flower Petals
Twin Strangers Help Irish Woman Find Identical Stranger From Sweden
Illustrator Perfectly Captures The Beauty Of Single Life
Artist Creates Impressive Portraits Using The Humble Kitchen Salt
Cultural Torture: An Offensive And Ironic Guide To Pissing People Off In Their Own Countries
Artist Illustrates Common Household Items’ Conversations During Quarantine
50 Transformations By This Hairstylist And His Team That Show The Power Of A Good Stylist
24 Makeup Transformations That Deserve An Oscar Nomination
This Artist Creates One Glorious Poster For Each Part Of The New Twin Peaks Every Week
Star Wars Characters Reimagined As Winnie The Pooh And Friends
Stunning Digital Female Portraits By Irakli Nadar
Humorous Posters Of Graphic Design Puns That Will Make Designers Laugh
Quarantine - Everyone Against The Virus: Brazil Designer Made A Boardgame About Quarantine
Gulun
42 Powerful Examples of Social Advertising
Pierre Schmidt’s Melting Faces Show Us The Terrifying Beauty Of The Subconscious Mind
The Many Faces of the Tiger: Funny Drawings by Bu2ma
Artist Transforms Photographs Into Completely Superb Different Images With Photoshop
Hilarious Dark Humor Retro Illustrations By Steven Rhodes
"Under A Darkening Sky": The Superb Sci-Fi Concept Art By J.C. Park
Cinta Vidal Agulló’s Incredible Paintings Defy Gravity
f1, formula, helmet, one, pilot