Spectacular Winning Photos from The Wildlife Photographer of The Year 2020

The fifty-sixth Wildlife Photographer of the Year exhibition will immerse you in the breathtaking diversity of the natural world.

Explore some of the world’s richest habitats, see fascinating animal behaviour and get to know some extraordinary species. Go deeper and discover the surprising – and often challenging – stories behind the images during a time of environmental crisis. Each image has been selected by a panel of international experts and showcases some of the best wildlife photography in the world. 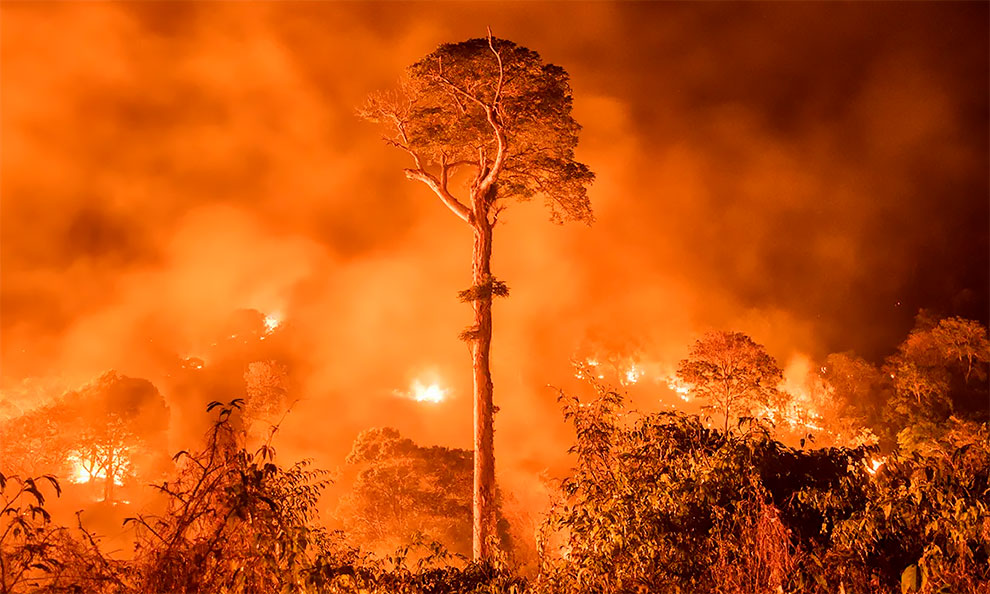 A fire burns out of control in Maranhão state, north-eastern Brazil. A single tree remains standing – ‘a monument to human stupidity’, says Charlie, who has been covering deforestation in the Amazon for the past decade. Photograph: Charlie Hamilton/2020 Wildlife Photographer of the Year 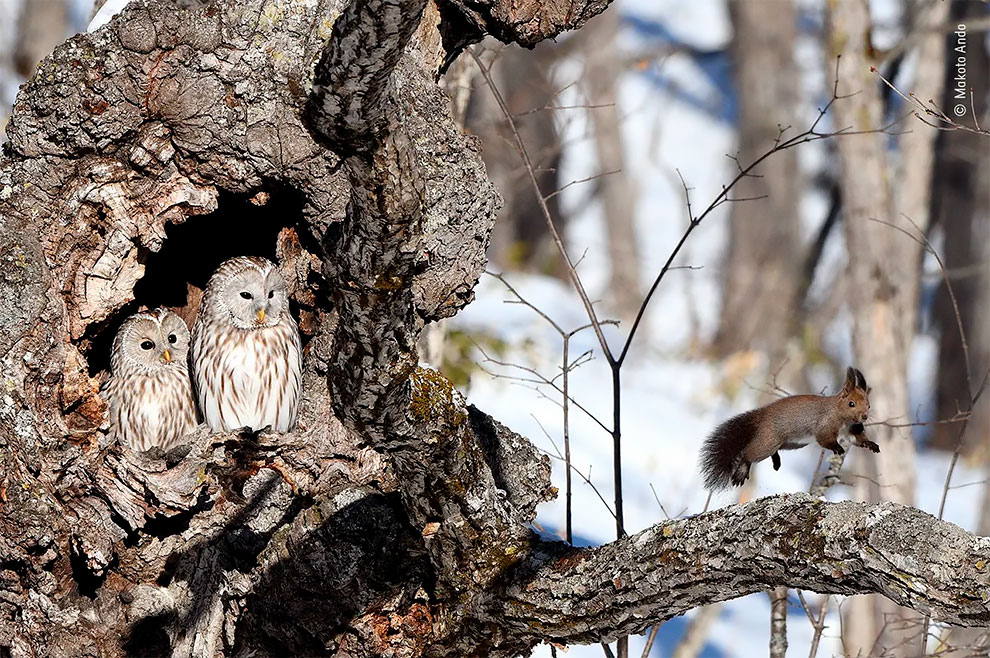 A red squirrel bounds away from its surprise discovery – a pair of Ural owls. In a forest near his village on the Japanese island of Hokkaido, Makoto spent three hours hiding behind a nearby tree, watching the owl couple. Suddenly, a squirrel appeared from the treetops. Photograph: Makoto Ando/2020 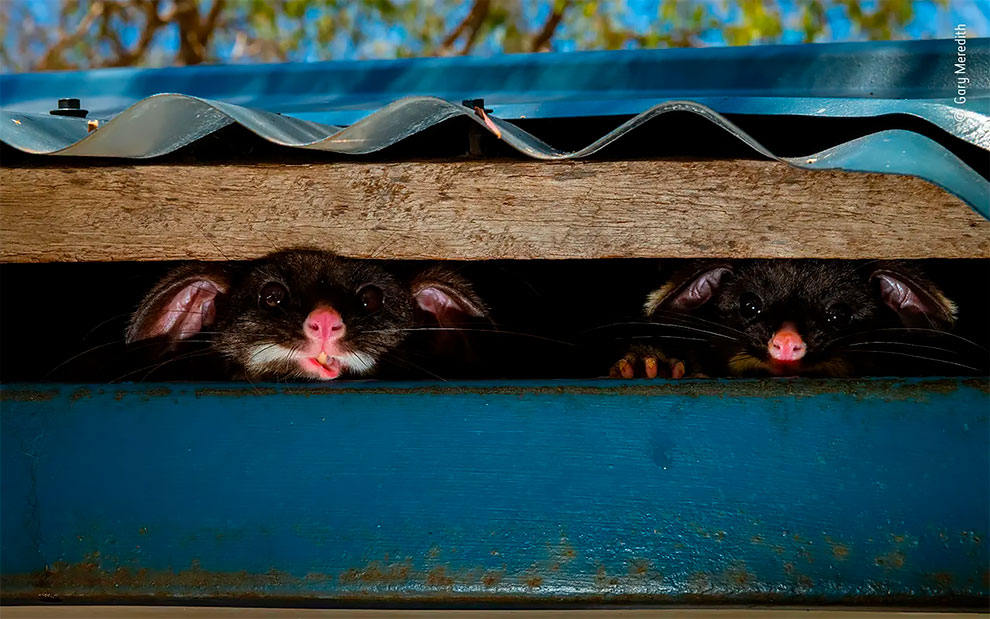 Two common brushtail possums – a mother (left) and her joey – peek out of their hiding place under the roof of a shower block in a holiday park in Yallingup, western Australia. Gary had watched them all week. They would pop up at sunset, keep an eye on the campers until dark, then squeeze through the gap and head for the trees to feed on the leaves of a peppermint tree. Photograph: Gary Meredith/2020 Wildlife Photographer of the Year 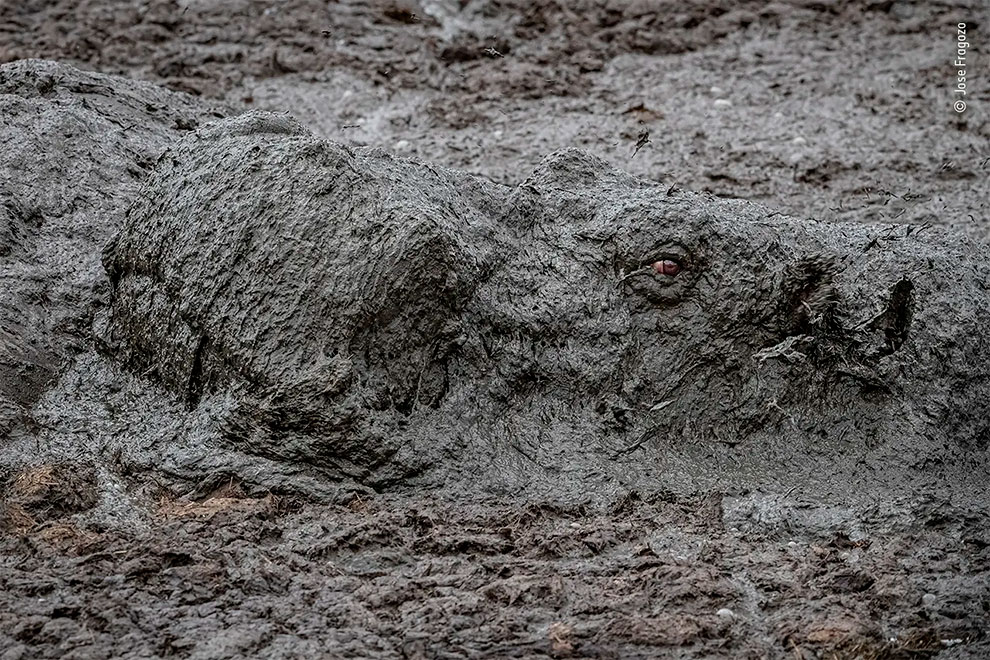 An eye blinks open in the mud pool as a hippopotamus emerges to take a breath. The challenge for José was to catch the moment an eye opened. For several years, José has been watching hippos in Kenya’s Maasai Mara national reserve – here in a remnant of the drought-stricken Mara River. Photograph: José Fragozo/2020 Wildlife Photographer of the Year 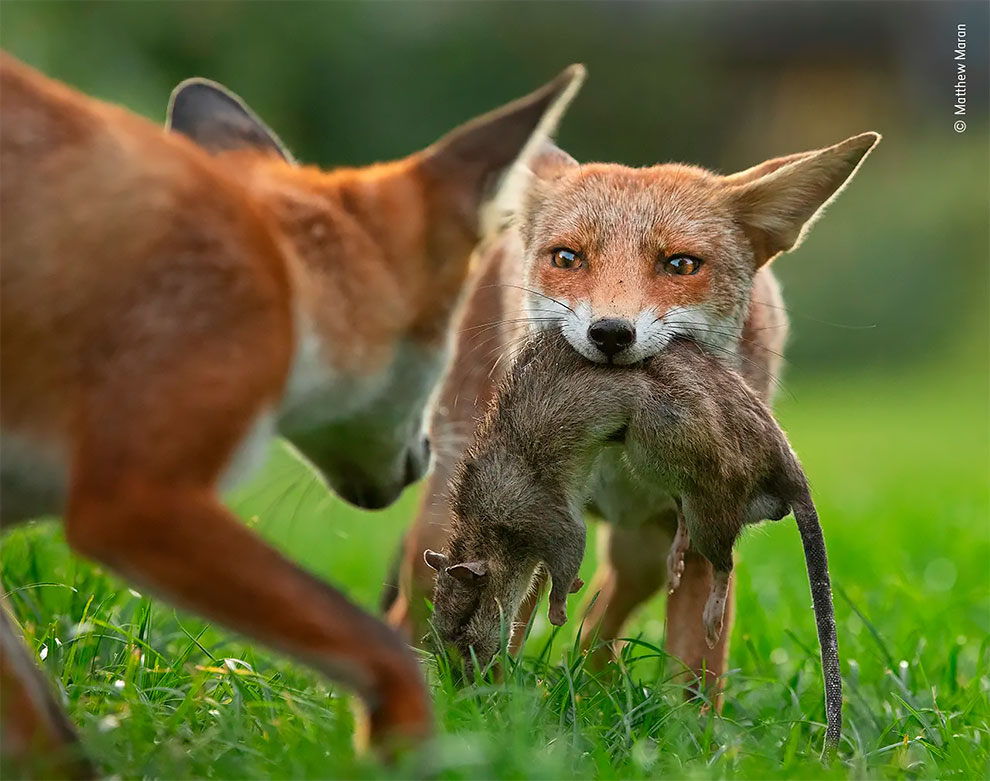 A young fox holds tight to her trophy – a dead brown rat – as her brother attempts to take it off her. For the past four years, Matthew has been photographing the foxes that live on a north London allotment. On this August evening, as Matthew watched the youngsters play, one of them ran out of the bushes with a dead rat in its mouth. The other three began squabbling over it and a tug-of-war ensued. Photograph: 2020 Wildlife Photographer of the Year 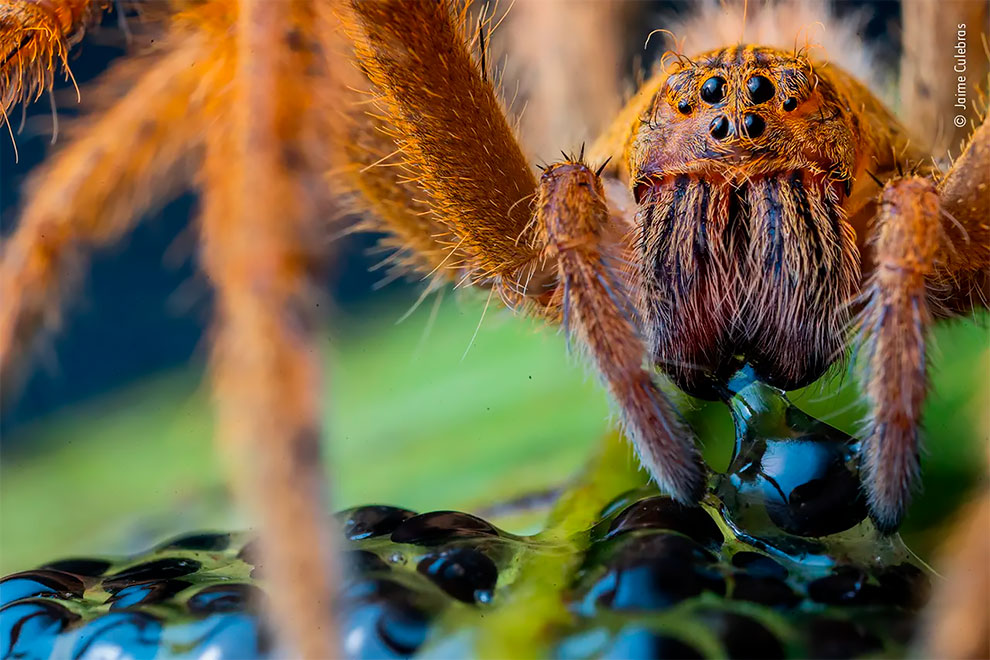 A large wandering spider – black, hooked fangs, tipping its bristly, striped mouthparts – pierces the egg of a giant glass frog, injects digestive juices and sucks in its liquefied prey. Jaime had walked for hours, in darkness and heavy rain, to reach the stream in Manduriacu reserve, north-west Ecuador, where he hoped to find glass frogs mating. His reward was a chance to photograph a wandering spider with an 8cm leg span devouring the frogs’ eggs. Photograph: Jaime Culebras/2020 Wildlife Photographer of the Year 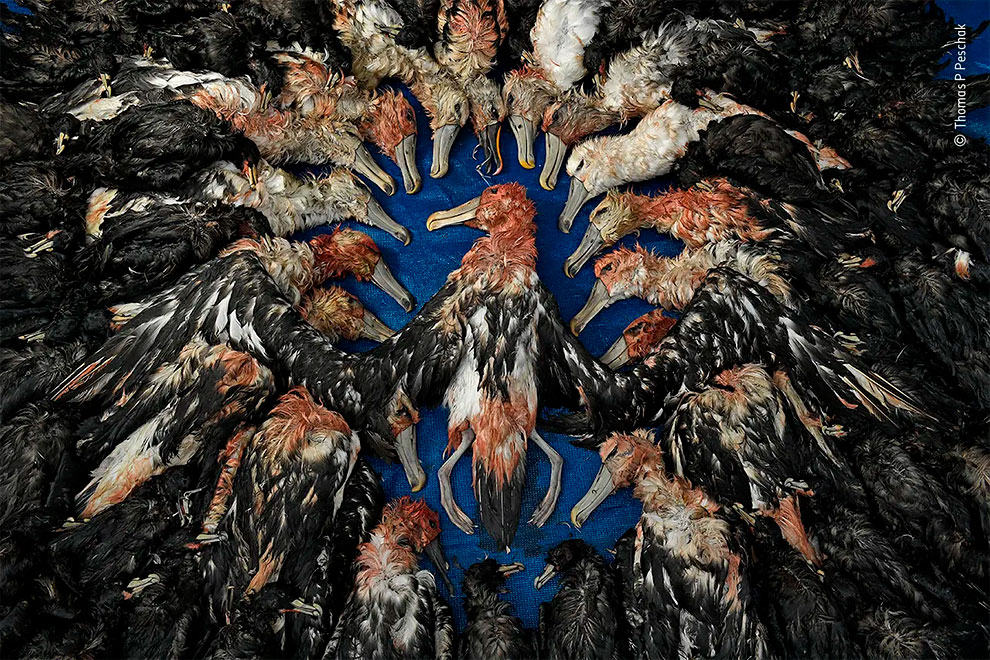 Unlikely as it seems, this display illustrates a South African conservation success story. It represents the comparatively smaller number of deaths of seabirds – here shy albatrosses and a yellow-nosed albatross and white‑chinned petrels – caught in 2017 on longlines set by Japanese tuna-fishing boats off South Africa’s coast. Photograph: Thomas P Peschak/2020 Wildlife Photographer of the Year 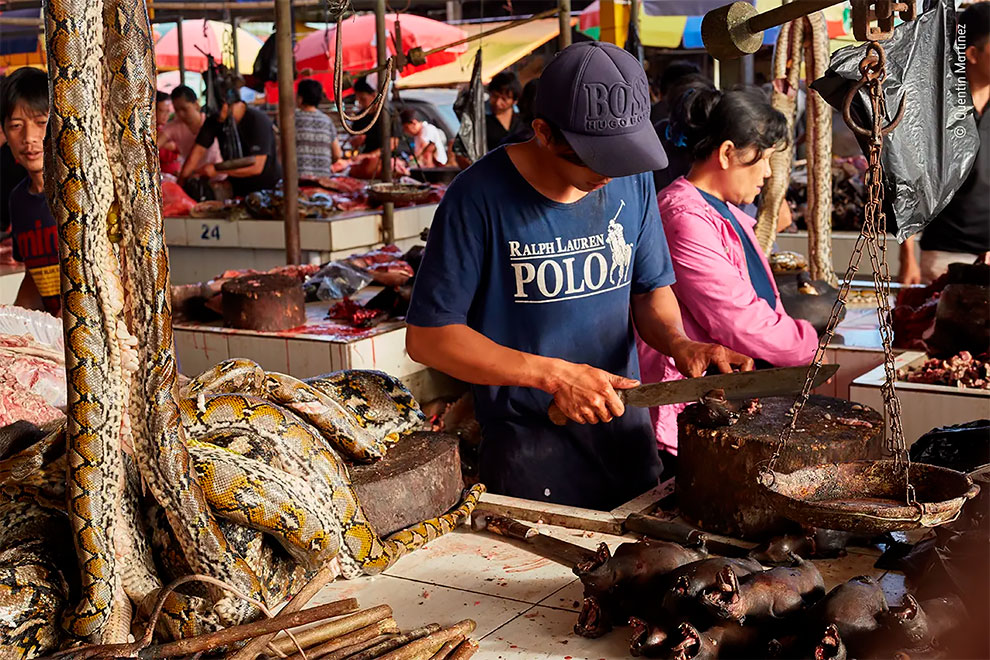 A market trader slices up fruit bats surrounded by pythons to his right, with bamboo-skewered ‘bush’ rats beneath them, in Tomohon market in north Sulawesi, Indonesia. Quentin observed the reality of the bushmeat trade, where wild animals are tied to ropes or piled up in cages, awaiting butchery. Photograph: Quentin Martinez/2020 Wildlife Photographer of the Year 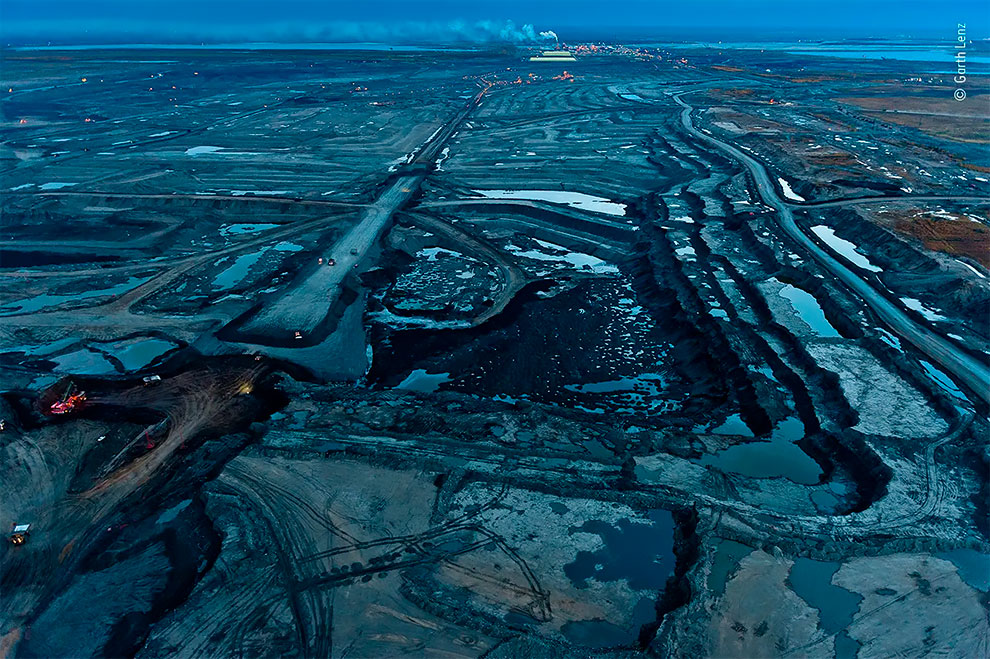 As twilight falls on the Alberta tar sands, the landscape takes on an oily blue tint. This vast expanse – once boreal forest – is just one section of the Mildred Lake tar mine, one of the region’s many tar mines that form the world’s third largest oil reserve. Photograph: Garth Lenz/2020 Wildlife Photographer of the Year 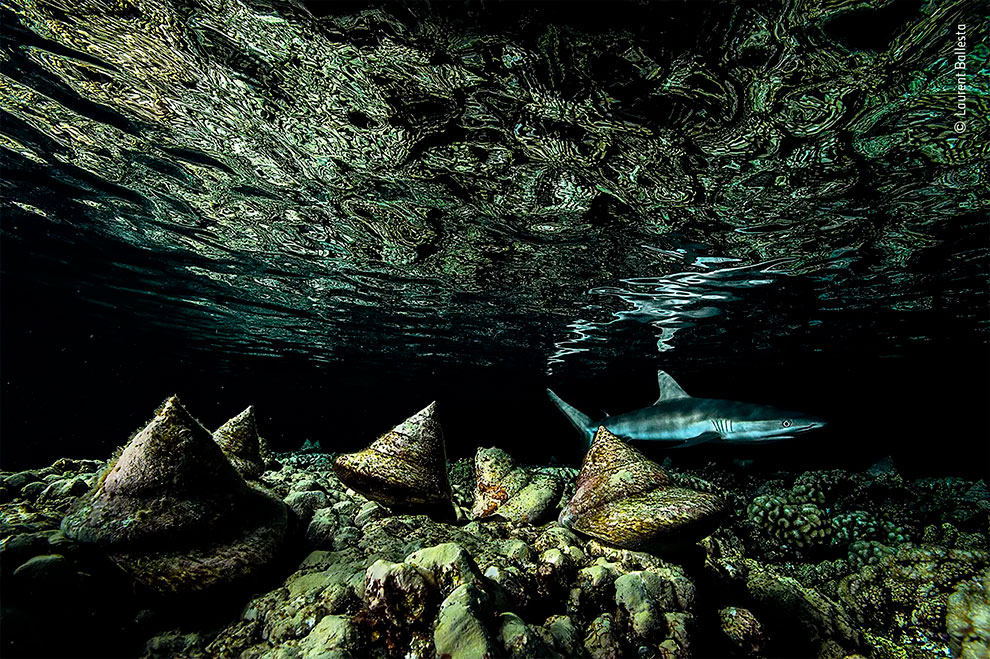 As darkness falls on the remote coral Fakarava Atoll in French Polynesia, the molluscs begin to move. These large topshells – reaching 15cm across the base – spend the day hiding in crevices among corals, usually on the outer fringes of the reef. Photograph: Laurent Ballesta/2020 Wildlife Photographer of the Year 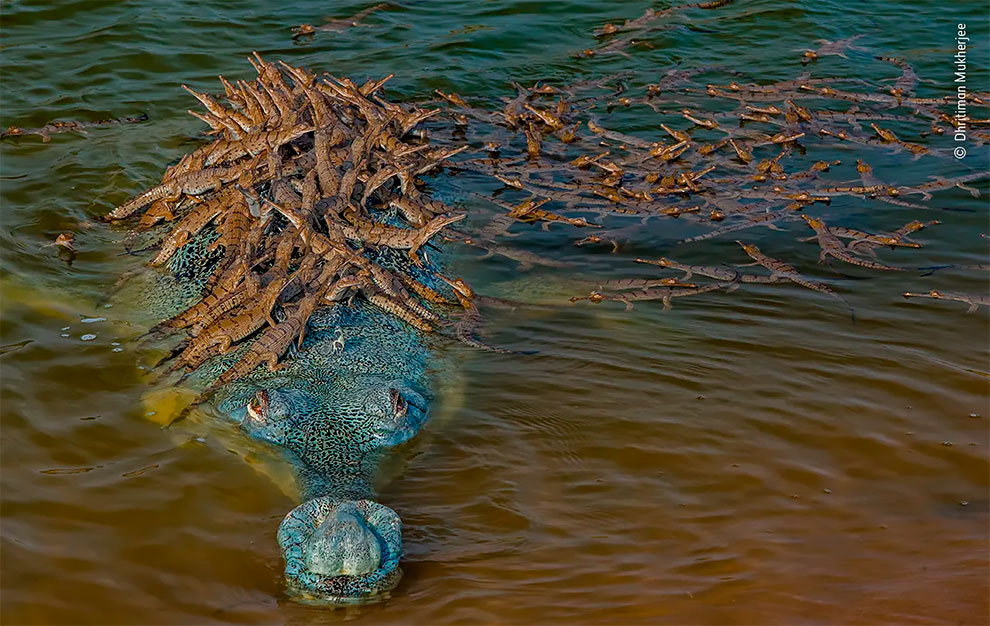 A large male gharial provides support for his numerous offspring. It is breeding season in the National Chambal Sanctuary in Uttar Pradesh, northern India, and this usually shy reptile exudes confidence. The species is critically endangered – an estimated 650 adults are left, about 500 of them living in the sanctuary. Photograph: Dhritiman Mukherjee/2020 Wildlife Photographer of the Year

Plants and fungi category: The forest born of fire by Andrea Pozzi, Italy 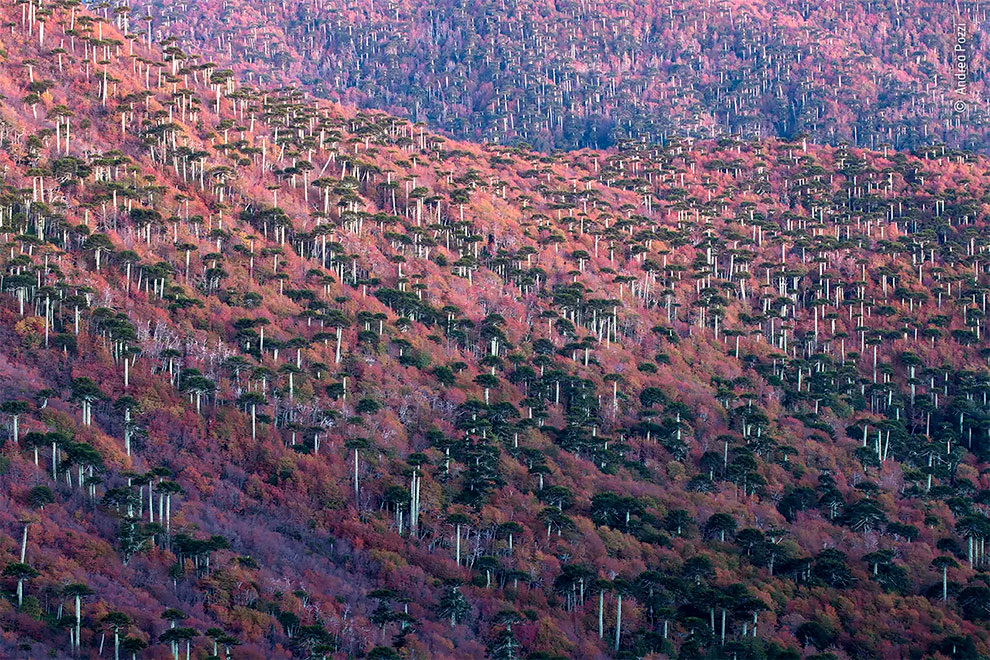 The Araucanía region of Chile is named after its Araucaria trees – here standing tall against a backdrop of late-autumn southern beech forest. Andrea hiked for hours to a ridge overlooking the forest and waited for the right light, just after sunset, to emphasise the colours. The trunks gleamed like pins scattered on the landscape. Photograph: Andrea Pozzi/2020 Wildlife Photographer of the Year 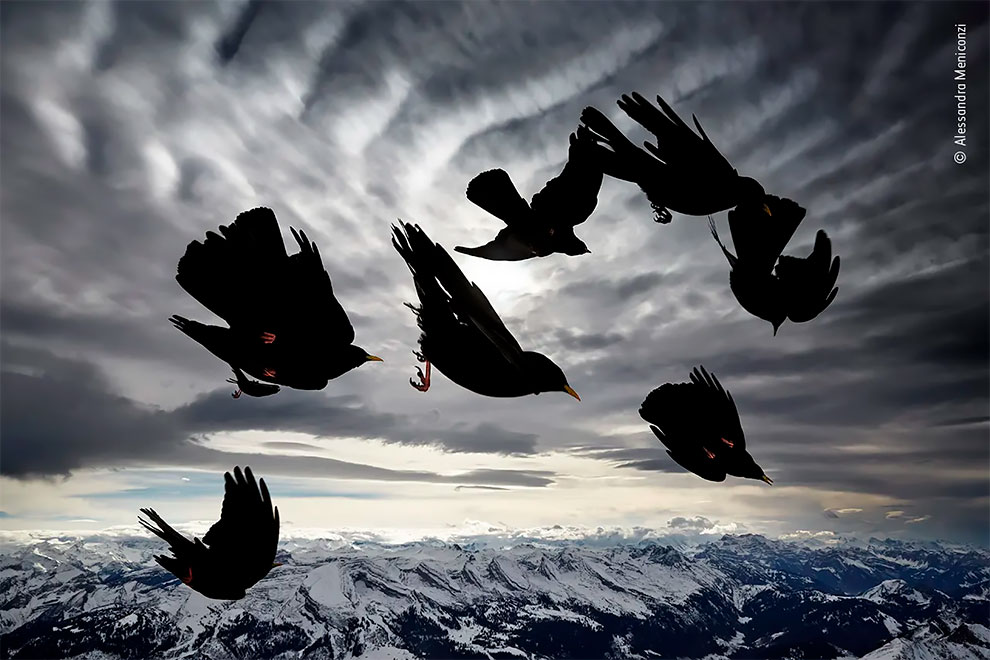 High on the Alpstein massif of the Swiss Alps, Alessandra could barely stand, but the yellow-billed choughs, blasted by the wind, were in their element. As a scavenging flock drew close, Alessandra could hear them shrieking ‘so loud and insistent in the dramatic landscape’. Taking advantage of the gusts of wind sweeping the birds towards her, she captured their impressive acrobatics against the moody sky and jagged, snow-capped mountains. Photograph: Alessandra Meniconzi/2020 Wildlife Photographer of the Year 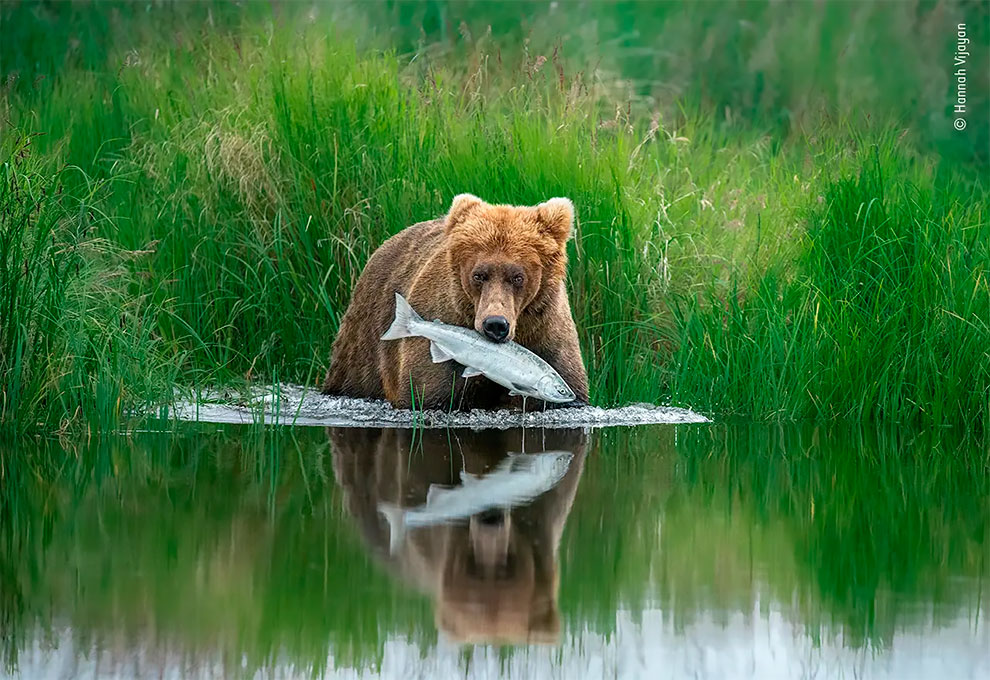 A brown bear pulls a sockeye salmon from the shallows of a river in Alaska’s Katmai national park. The huge park contains Pacific coastline, mountains, lakes, rivers and an estimated 2,200 brown bears. In spring, when bears emerge from hibernation in their mountain dens, many head down to feed on sedges in open meadows and forage for clams on the mudflats. Photograph: Hannah Vijayan/2020 Wildlife Photographer of the Year 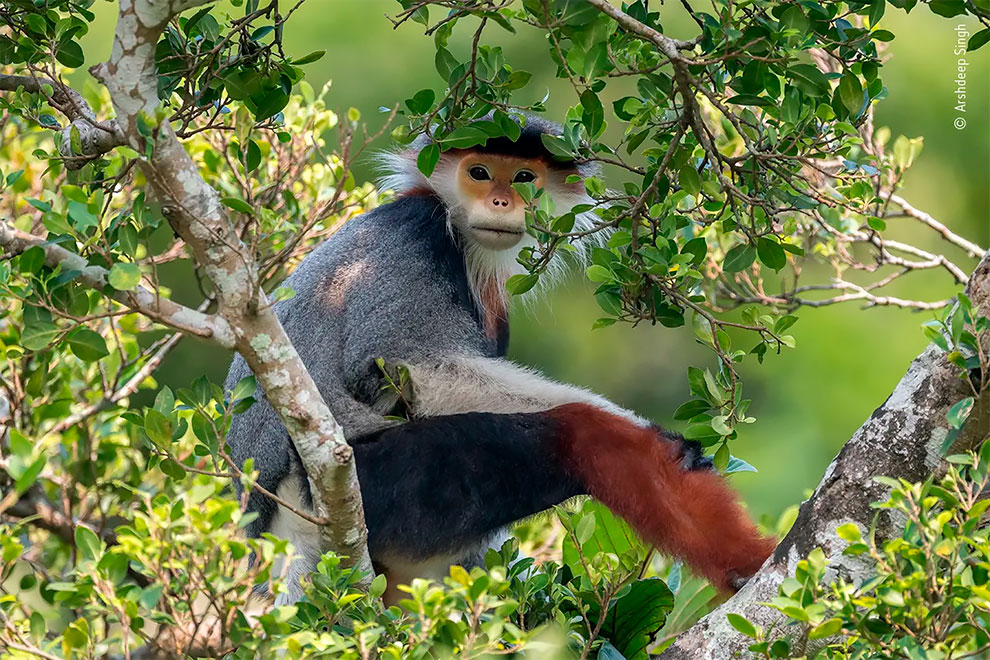 When his father planned a business trip to Vietnam, Arshdeep read about the endangered red-shanked douc langur and asked his father to take him along. The meeting was near Son Tra nature reserve, Vietnam’s last coastal rainforest and a stronghold for the langur. Found only in Vietnam, Laos and Cambodia, the primate is threatened by habitat loss, hunting and trade. Photograph: Arshdeep Singh/2020 Wildlife Photographer of the Year 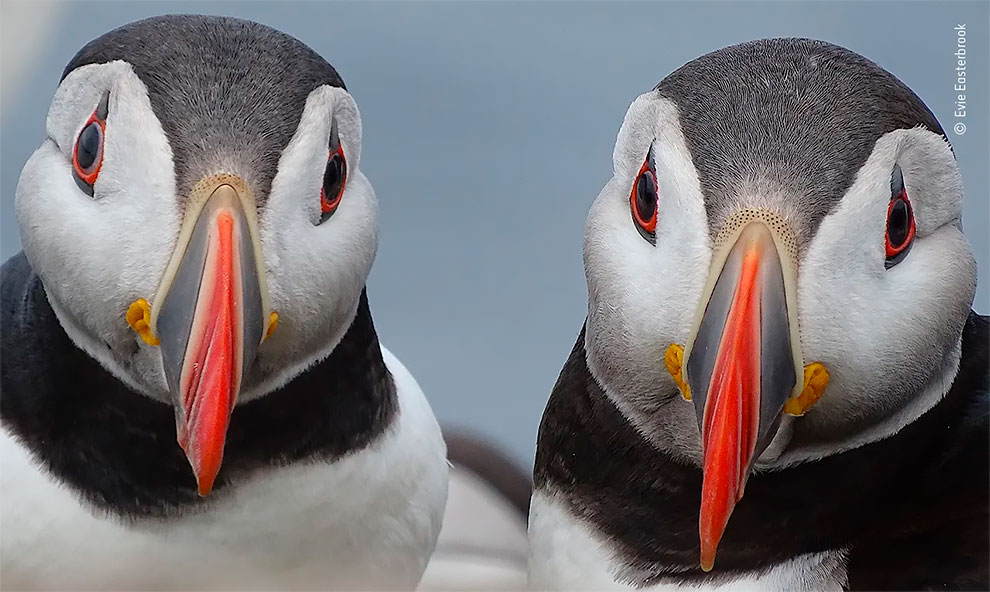 A pair of Atlantic puffins in vibrant breeding plumage pause near their nest burrow on the Farne Islands. Every spring, these small islands off the coast of Northumberland attract more than 100,000 breeding pairs of seabirds. When wintering at sea, their plumage is a dull black and grey, but by the time they return to breed they sport black ‘eye liner’ and brightly coloured bill plates. Photograph: Evie Easterbook/2020 Wildlife Photographer of the Year

Unexpected Coincidences On The Streets Of New York That This Russian Photographer Managed To Capture On Camera
Recent Entries For The Comedy Wildlife Photography Awards 2017
American Still Life
"Chernobyl: A Stalker’s Paradise" – Photographer Vladimir Migutin Captures The Chernobyl Exclusion Zone In Infrared
Vintage Pictures of Snow King Chairlifts without Any Safety Bars that Look Very Unsafe, 1950-1970
2014 National Geographic Photo Contest, Week 6
These Photographs Of Creepy Children Will Terrify You
Backstage Reality Of Russia: Atmospheric Photography Through A Skater’s Eyes
HUMANIMALIA
Amazing Award-Winning Photos Of The Wildlife Photographer Of The Year 2017 Contest
Miranda Kerr Showcases Designs by Carla Zampatti
Beautiful Black & White Photographs of Children Playing in Barcelona in the 1970s
Photographer Reveals What Tricks He Uses To Get Interesting Photos In 30 Examples
A Photographer Is Using A Unique Method To Show The Shift From Day To Night Across Famous Cities In Spectacular Images
Grizzly Bears Among Stunning Finalists of National Parks Photo Contest
Beautiful Aerial Photos Of The Blue Salt Fields, Shark Bay, Australia
"Further West": Creative Photography By Mako Miyamoto
Incredible Winning Images of The Nature Conservancy Australia 2021 Photo Contest
Photographer Captures Fantastic Photos of New York Reflected in Glass
Photographer Omar Reda Documents The Beauty Of Tribal Women In Ethiopia
The Winners of The Historic Photographer of The Year Awards 2021 Have Been Announced
Photoshop Contest Participants Give A Glimpse Of What If Giants Lived Among Us
These 64 Colorized Photos From The Past Will Blow You Away
Katy Perry as Elizabeth Taylor
animals, contest, nature, wildlife, winners