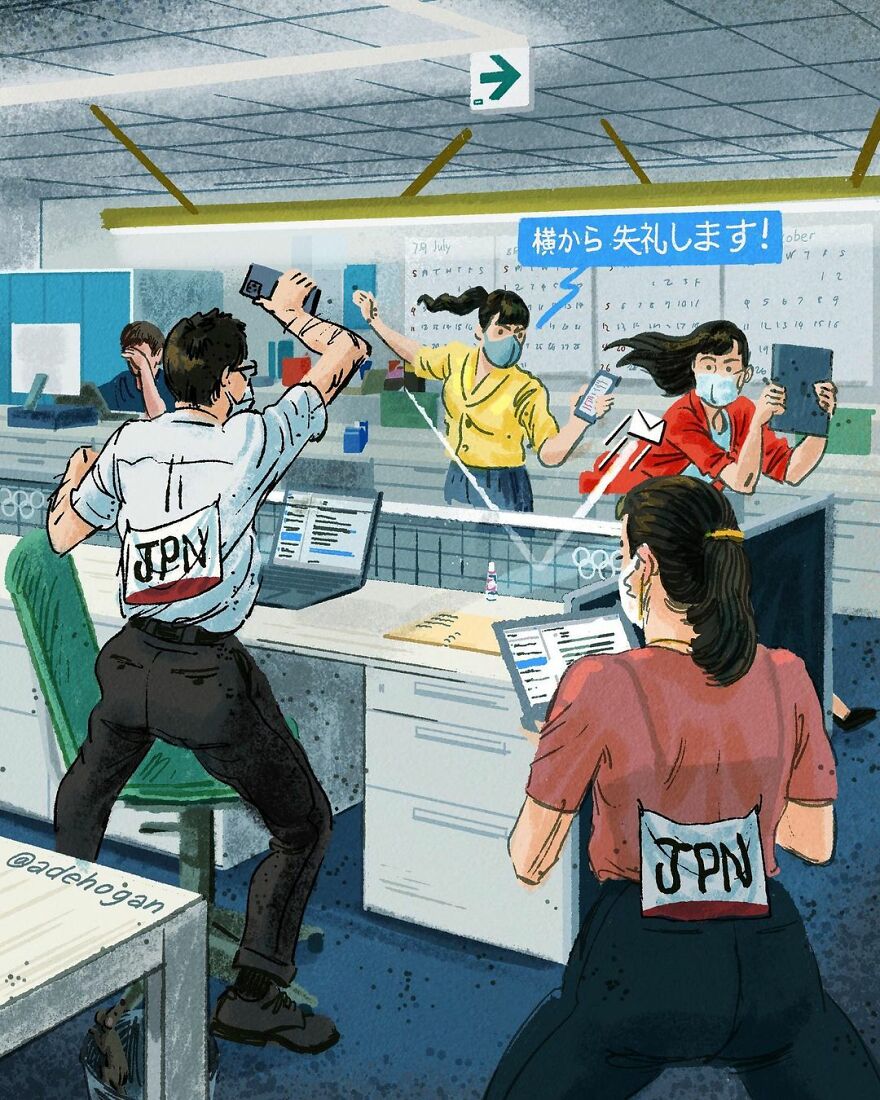 The Tokyo 2020 Olympics are officially over, but the Olympic performances and feats never stop. How, you wonder? Well, people who live ordinary lives do them every day. 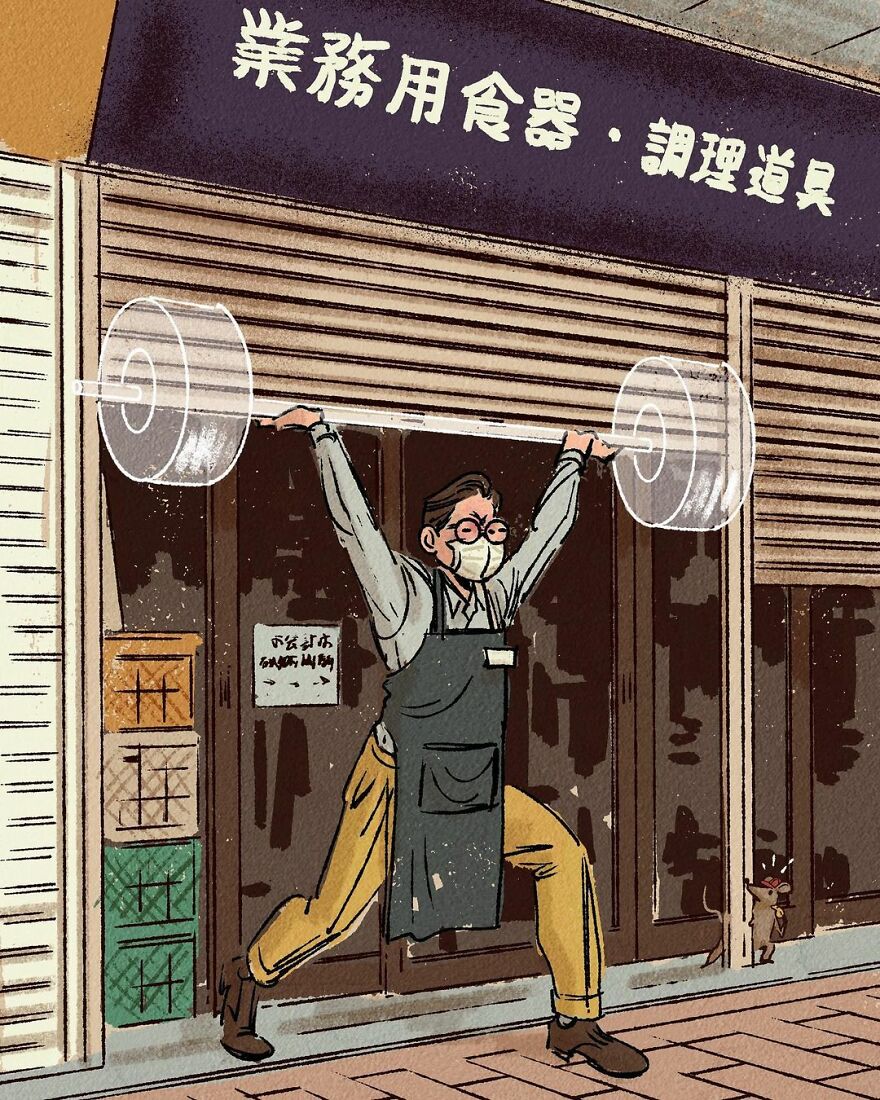 You might think that this is a little far-fetched, but this artist will prove to you that it’s exactly the case. Tokyo resident Adrian Hogan lived in the spirit of the Olympics just like all of Tokyo, and one day, he was struck by parallels that few would pick up on. He saw how ordinary people emulate the same athletic feats as the elite athletes. 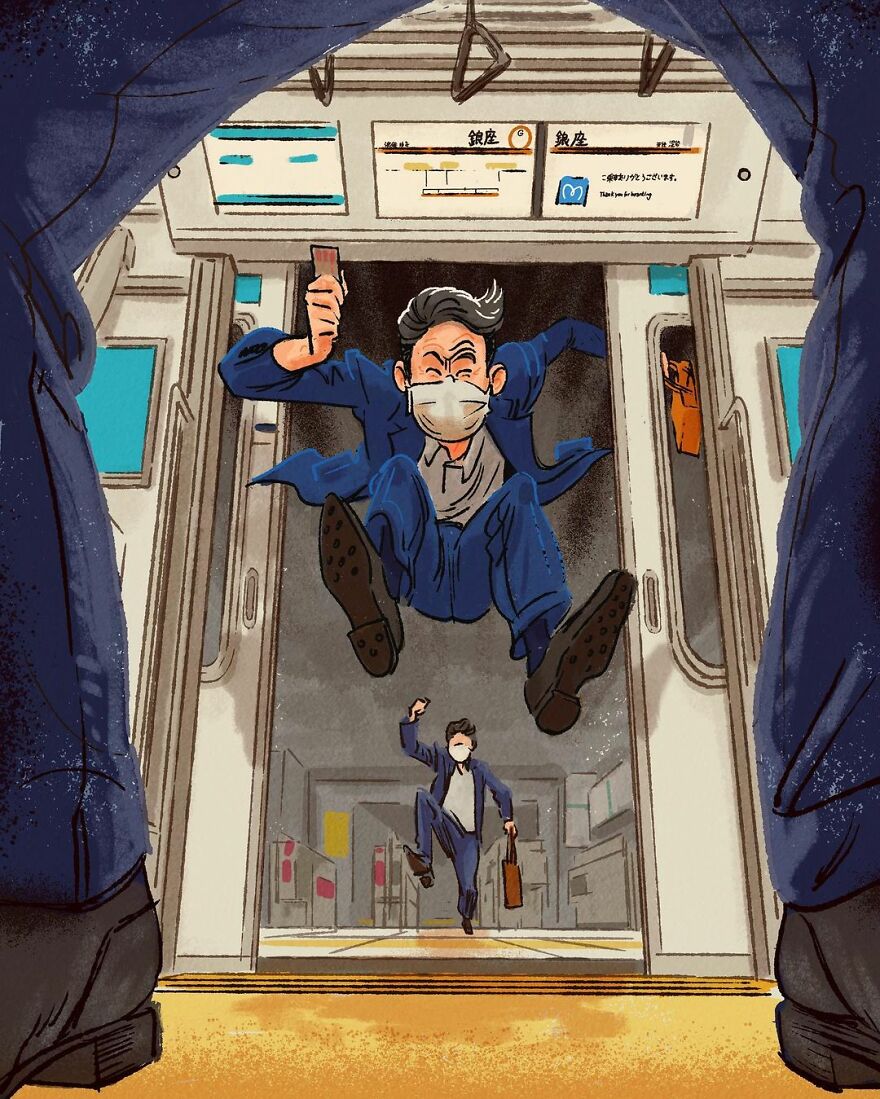 So he decided to pick up his tablet and find more of these interesting parallels. Though the mundane life is less glorified, his illustrations elevate the everyday actions of Tokyo’s residents to the level of professional performance of the Olympians. And once you see it, you’ll come to appreciate the athleticism of our day-to-day routines. 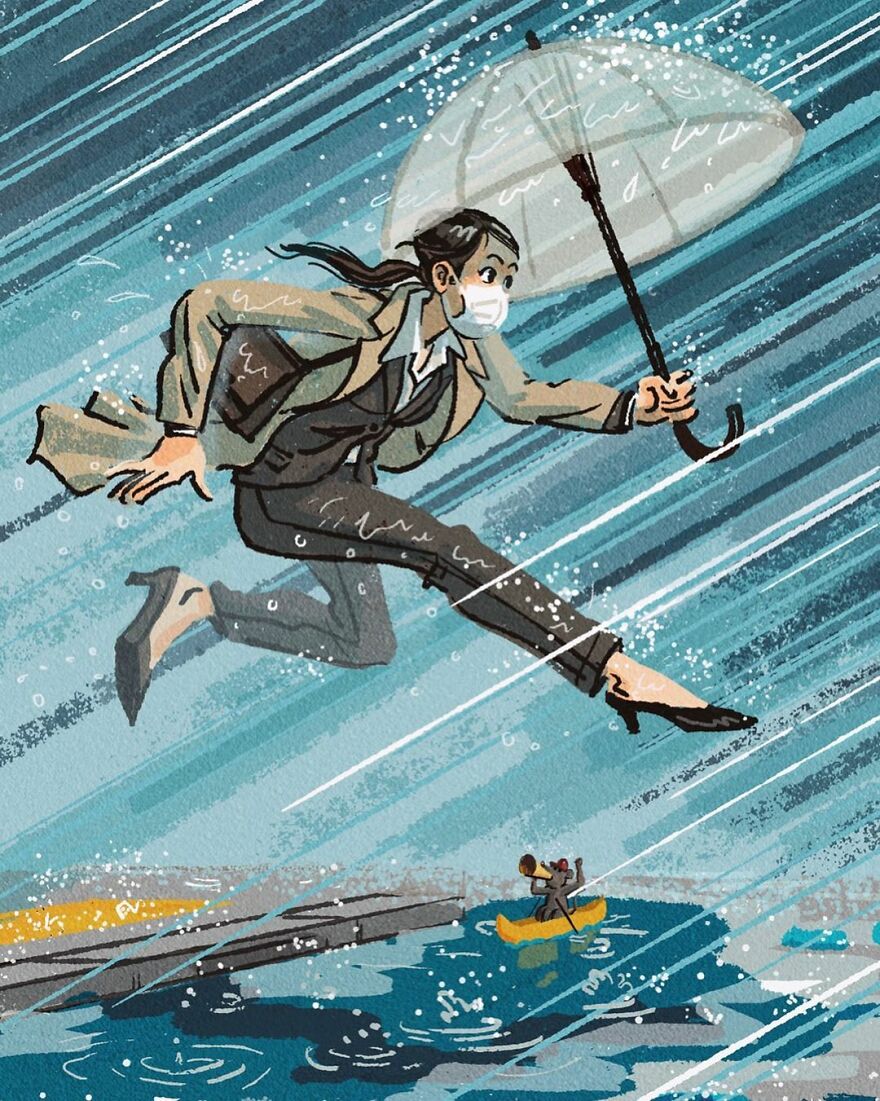 Here’s how the artist got this brilliant idea: “I saw a shop clerk recently who threw open their store shutters and it reminded me of a weightlifter throwing their barbell into the air,” Hogan wrote on Instagram. 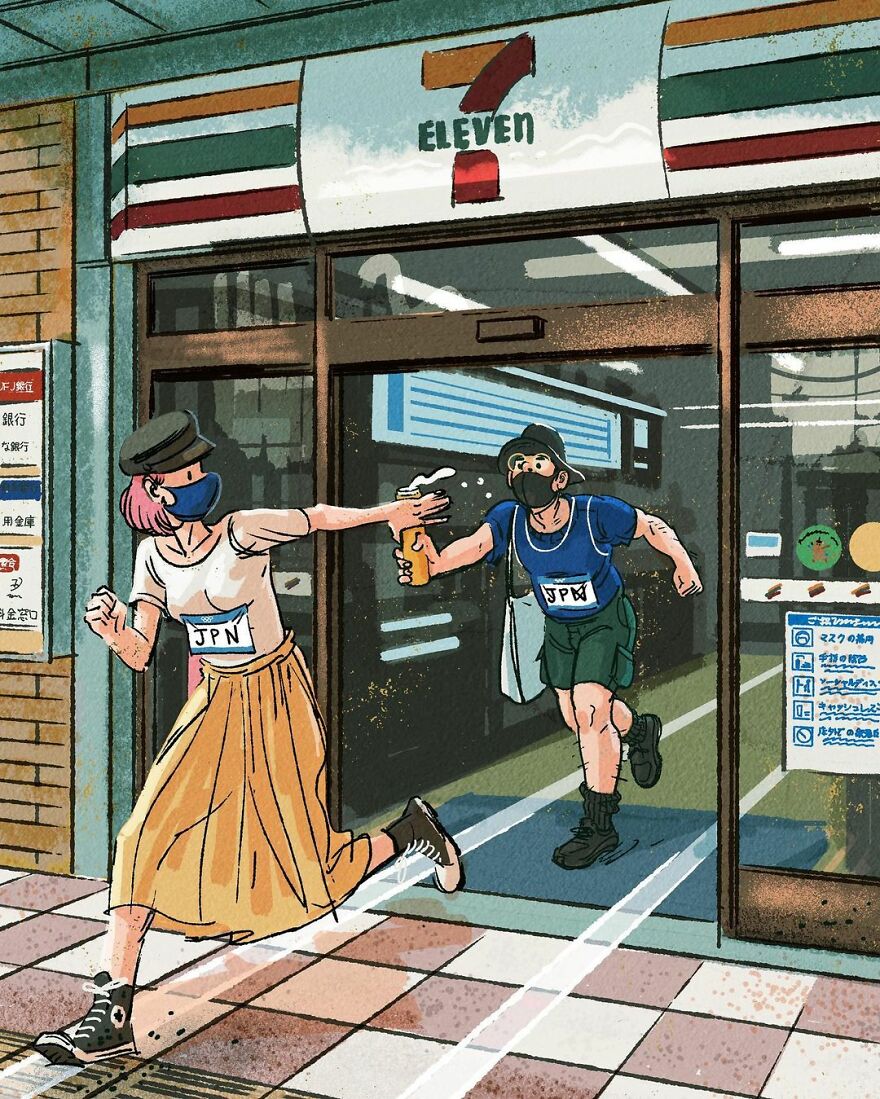 “I am an Australian from Melbourne. I work in Tokyo as a full-time freelance illustrator. I love living and working here. I like the way illustration is used in a lot of daily life in Japan (character designs everywhere, lots of illustrations used for public advertising, etc.) and wanted to be a part of it. I moved to Japan as I wanted an overseas experience. The more I have lived and worked in Japan, the more I wanted to create a life for myself here. My own country, Australia, is in the Asia-Pacific Region; I think it’s really important to get to know and understand our neighbors,” Adrian told Bored Panda. 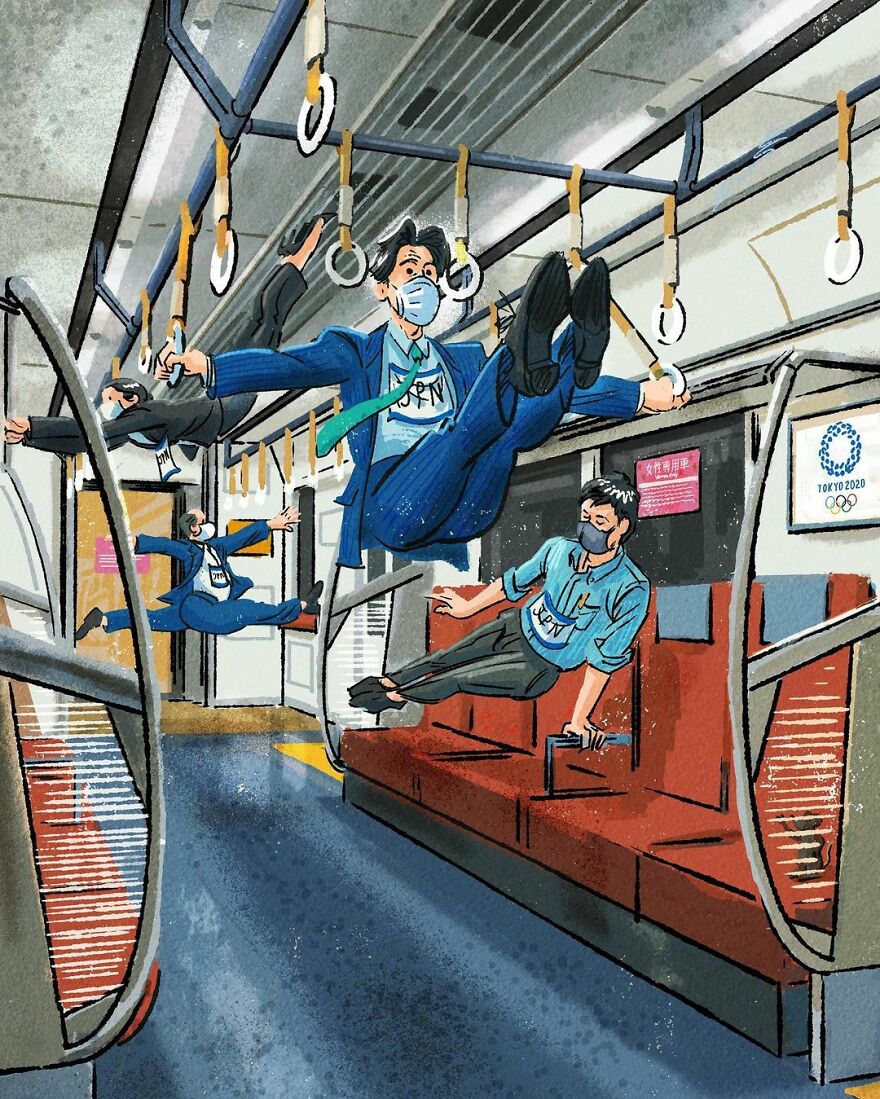 “The polling (and my understanding from asking my friends and clients) was that the Olympics were unpopular with most people living in Japan. My intention with this Olympic Games series of drawings wasn’t to turn a blind eye to the reality of what was going on – but to acknowledge the difficulties while staying positive.” And in terms of his own experience there, Adrian attested that his “overall experience of living in Japan has been positive so far.” 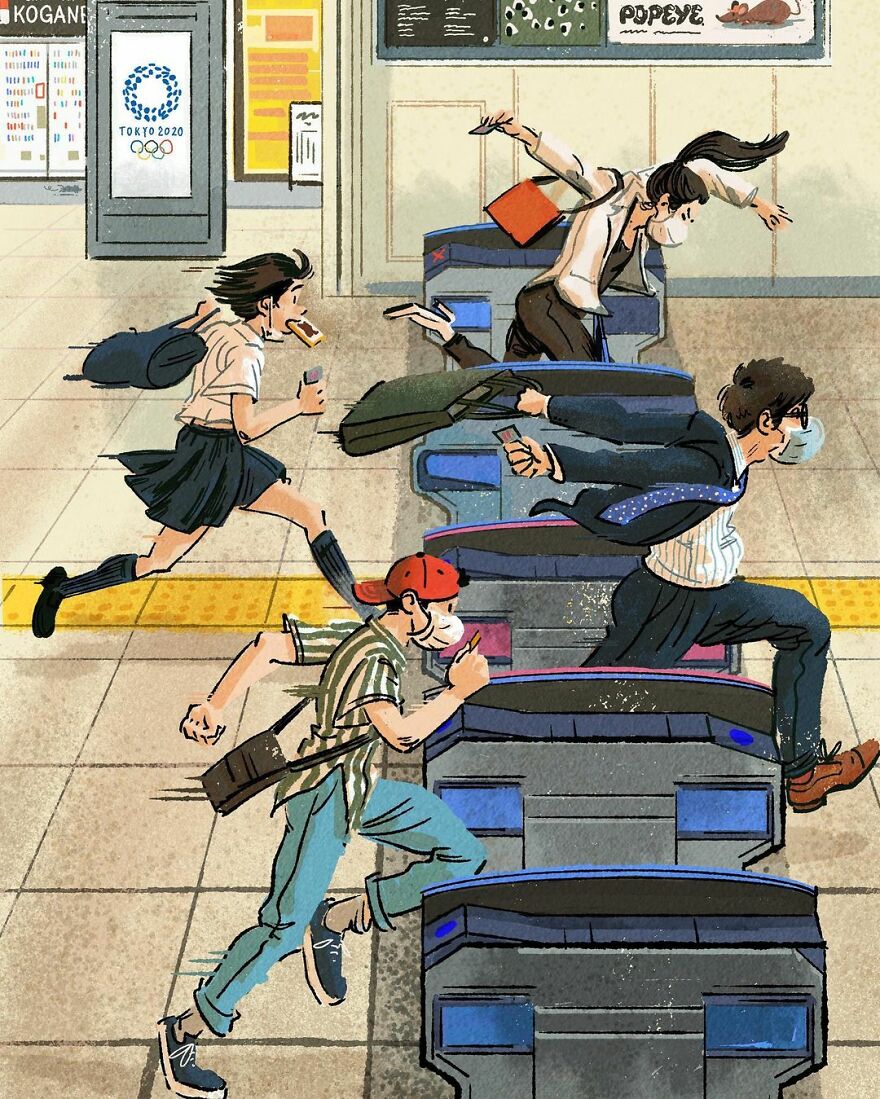 In terms of achievements, Tokyo’s Olympics were a huge success for Japan. Japan’s athletes got 27 gold medals, twice as much as in the 2016 Rio Olympics, and nearly triple as much as in London’s 2012 Olympics. It seems that the home court advantage worked in their favor this time, and athletes were highly motivated to excel and make their country proud. All in all, they came in third in terms of gold medals, and fifth in terms of all medals. Congratulations Japan! 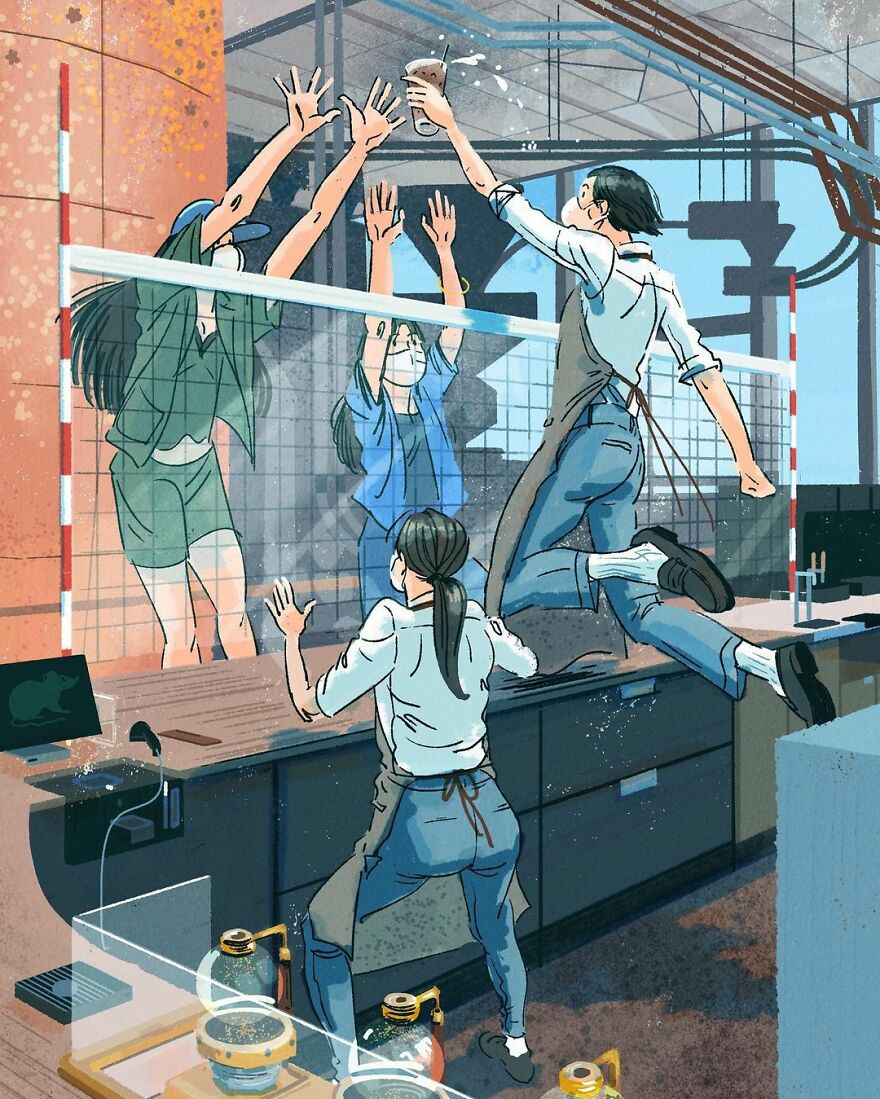 As we all know, Tokyo’s Olympics were also unique in other regards. Due to the raging global COVID-19 pandemic, the stadiums were bereft of crowds, athletes’ health was even more rigorously tested than ever before, and the whole event was delayed for a year. Though it’s not the first time the Olympics were delayed, the first time they were was in 1916, more than a hundred years ago, due to the First World War. During the Second World War, they were cancelled twice in 1940 and 1944. It goes to show how serious the pandemic is, though it’s not as serious as war, in which the Olympics are cancelled altogether. 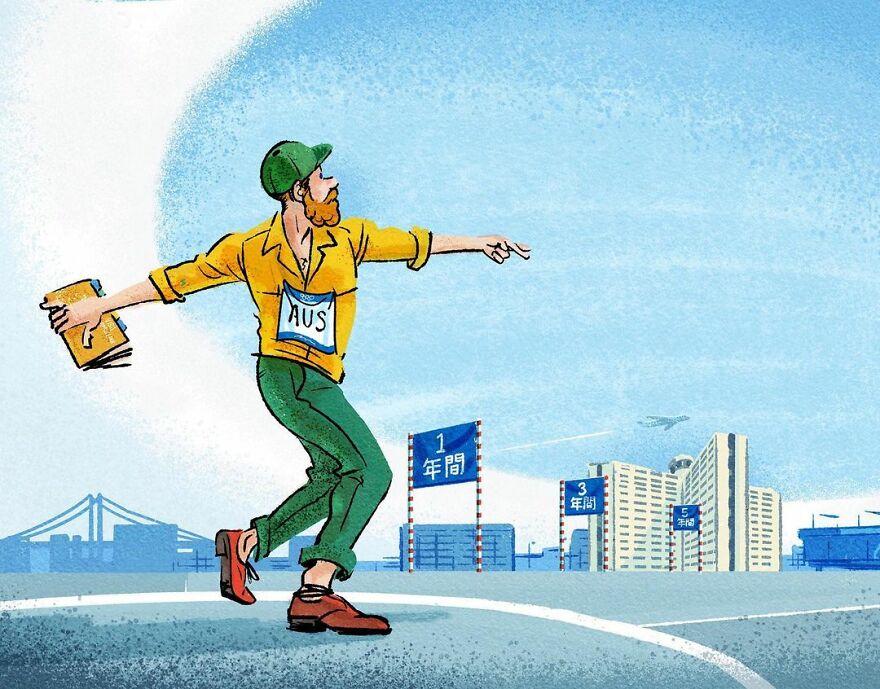 But in spite of all of that, the current Olympics was quite a success, and didn’t have any serious incidents concerning COVID-19. Most assumed that the event would be a disaster, and yet it didn’t turn out to be as disastrous as most have expected. People feared that it could’ve been cancelled altogether, due to rising concerns about another wave of the pandemic. Some feared that the organizational strain would be too much to bear. But in the end, everything was just about right, and people focused more on the positive side of the Olympics, which is the athletic excellence and willpower of the world’s best sportspeople. 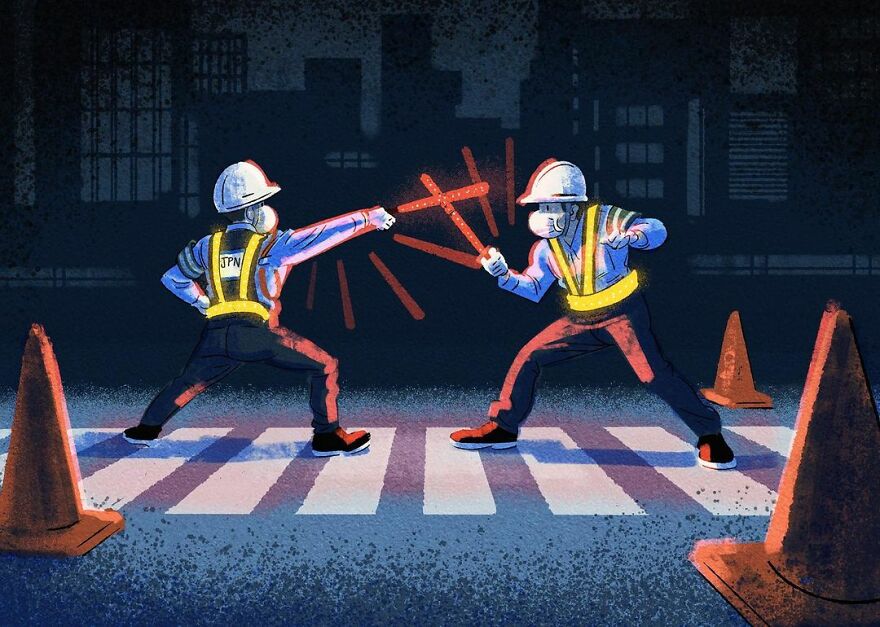 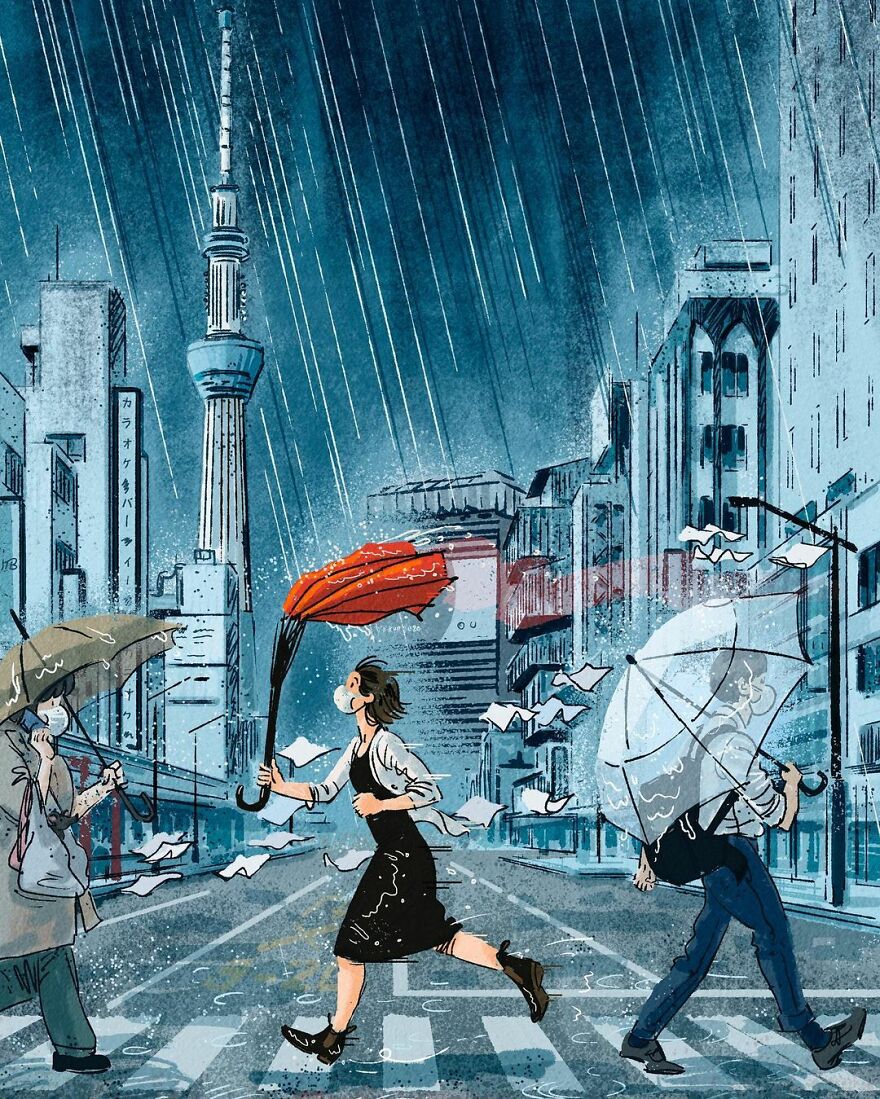 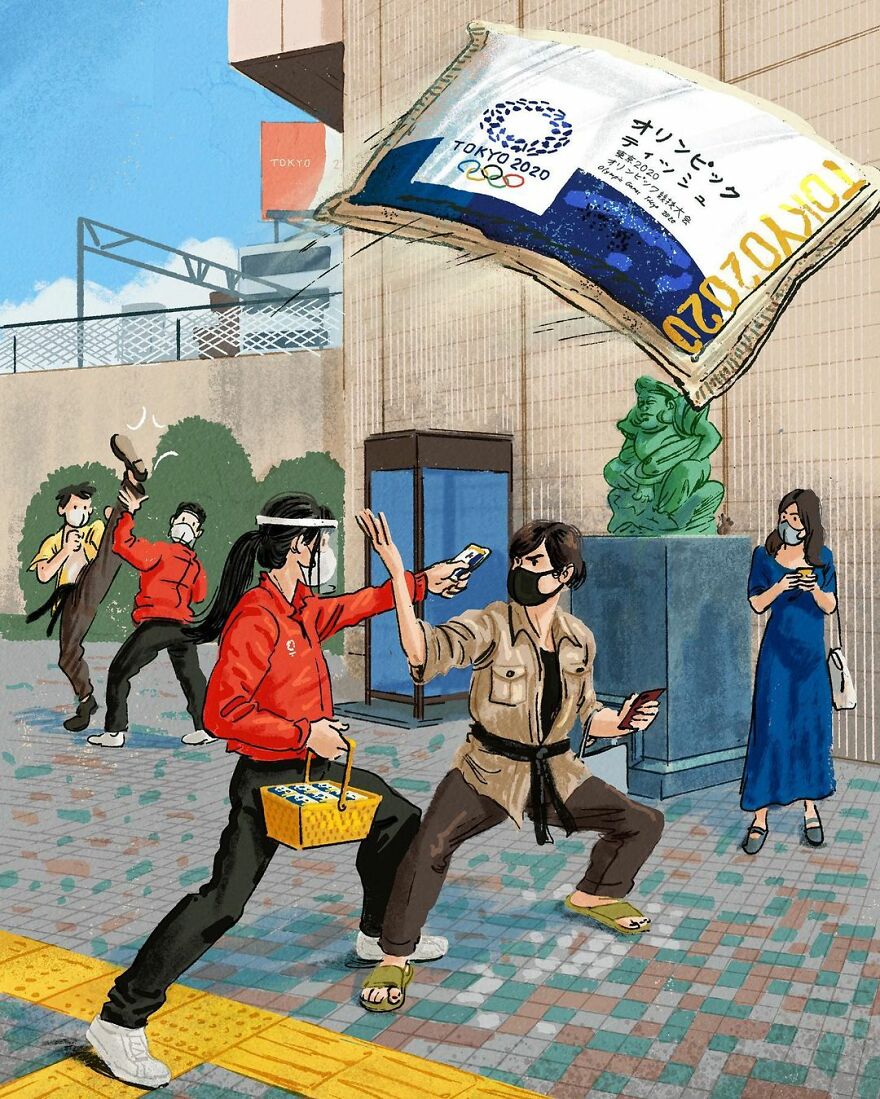 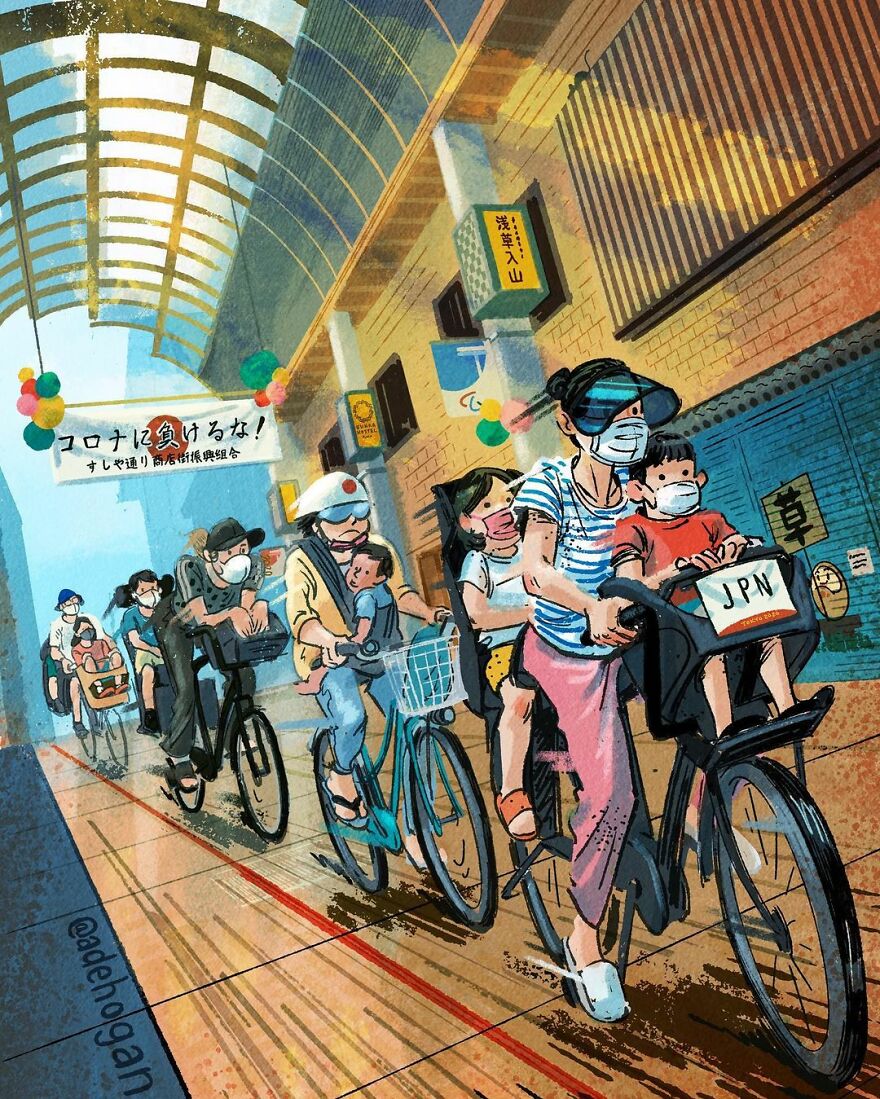 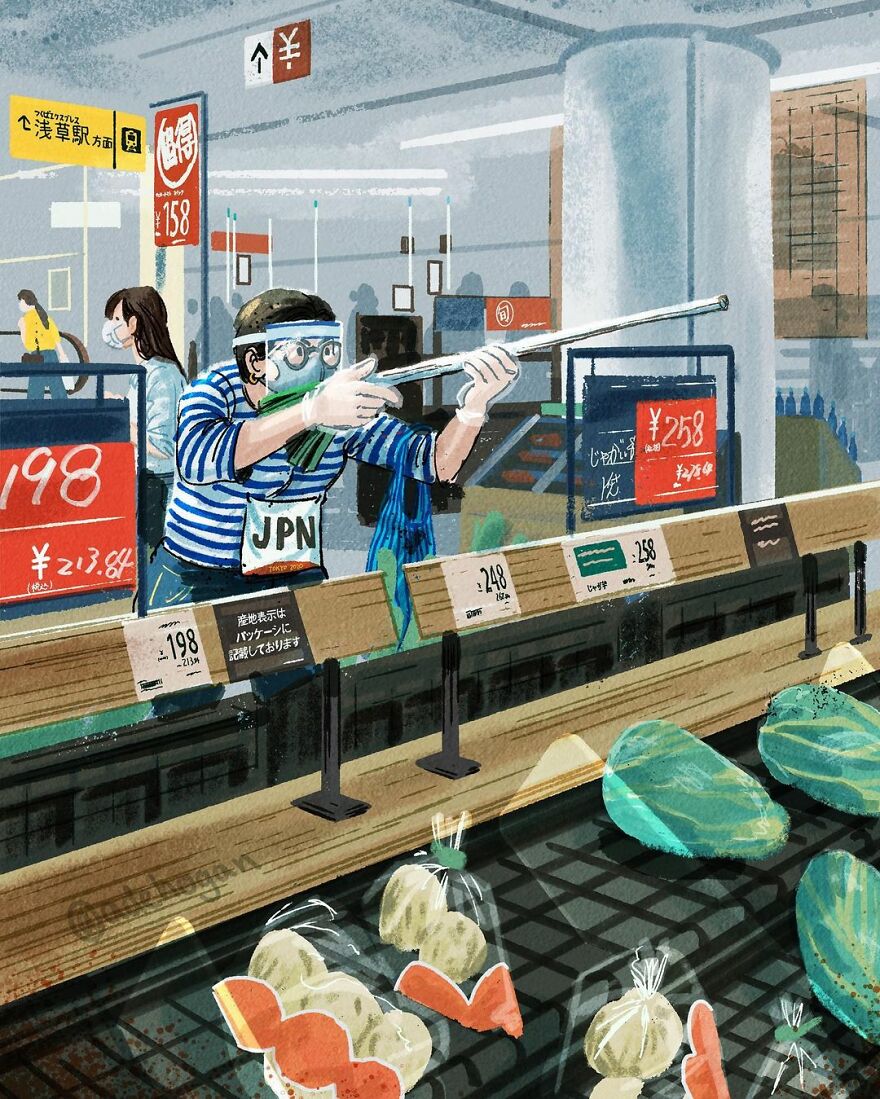 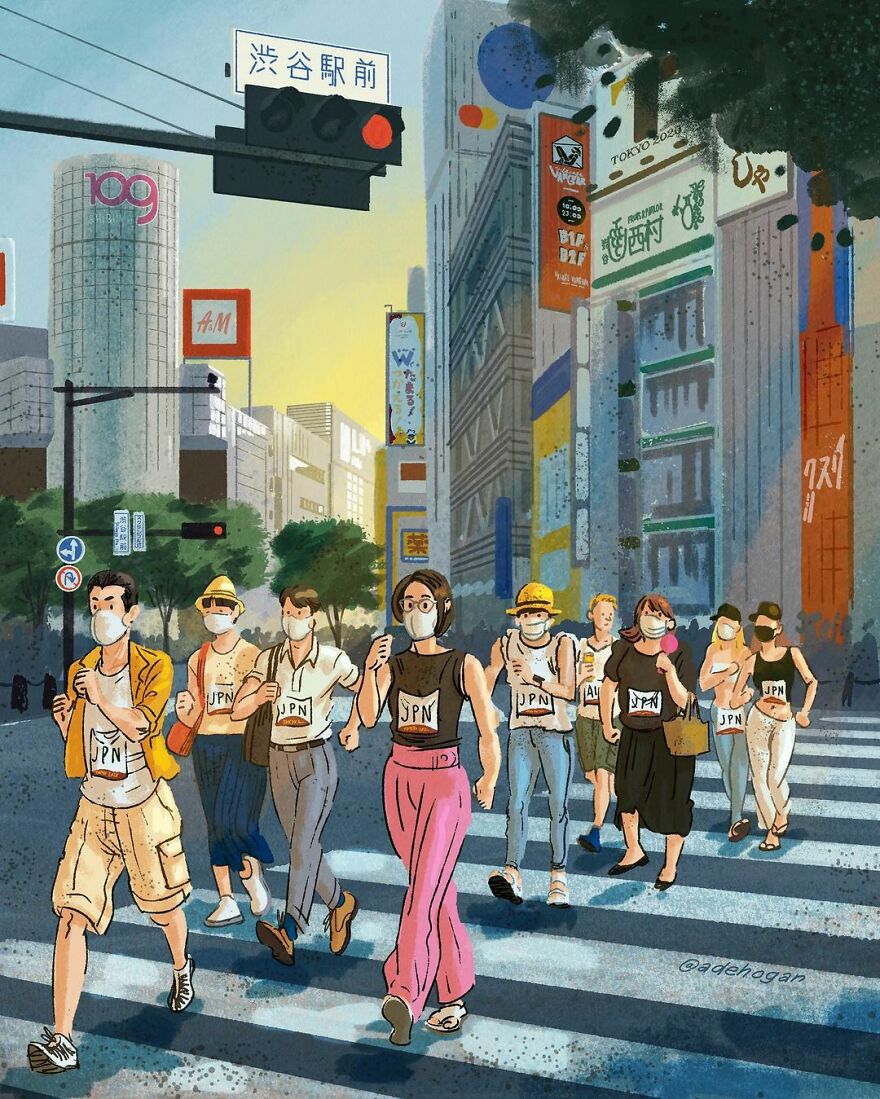 Runner Uses The Streets Of San Francisco As His Canvas, Maps Out Artistic Designs With His Routes
The New York Times Magazine’s Logo Reimagined
Artist Fran Krause Perfectly Illustrates Your Deepest, Darkest Fears
When An Artist Turns Himself Into Superheroes Thanks To Body Painting
These Vintage Life Hacks Were Found Inside A Cigarette Pack From The 1900s
"Shadows": The Superb Cinematic, Dark and Melancholic Photoworks of Kaiwan Shaban
Have A Nice Life Asshole: Breakup Stress Reliever Adult Coloring Book
Little Animals - Big Love: Cute Drawings by Illustrator Dric
18 Year Old Model With Down Syndrome Owns New York Fashion Week
Dust Car Art by Rafael Veyisov
Photographer Documented An Empty Mall In NY During Peak Of Coronavirus Outbrake
This Ukrainian Photoshop Master’s Skills Will Make You Question Everything You’ve Seen Before
You Can Now Get Cat Sticker To Cover Up Racist Graffiti You Find On The Streets
Punking The Past: The Steampunk Aesthetic Of Victorian London In Superb Paintings Of Vadim Voitekhovitch
Japanese Artist Man Creates Complex Objects out Of Twisted Balloons
Trees Grow From Bricks And A Storefront On The Streets Of New York
Tattoo Artist Andrea Raudino Creates A Masterpieces Inspired By The Japan And Pop Culture
There’s An Online Community About Stapling Bread To Trees
Bizarre, Provocative And Imaginative Collages By Naro Pinosa
"Next Day You'll be Okay"
This Digital Russian Artist Serves Fantasies Of Spontaneity In His Crazy 3D Visuals
Wild Animal Spirits In Beautiful Tattoos By Cheyenne
Artist Jane Radstrom Creates Stunning Portrait Paintings With Photographic Effects
Oscar Movie Posters Remade With 'Winnie The Pooh' Will Add Critical Acclaim To Your Childhood
coronavirus, games, japan, olympic, sport, tokyo