A fountain at the former technical university in Gyumri, Armenia. 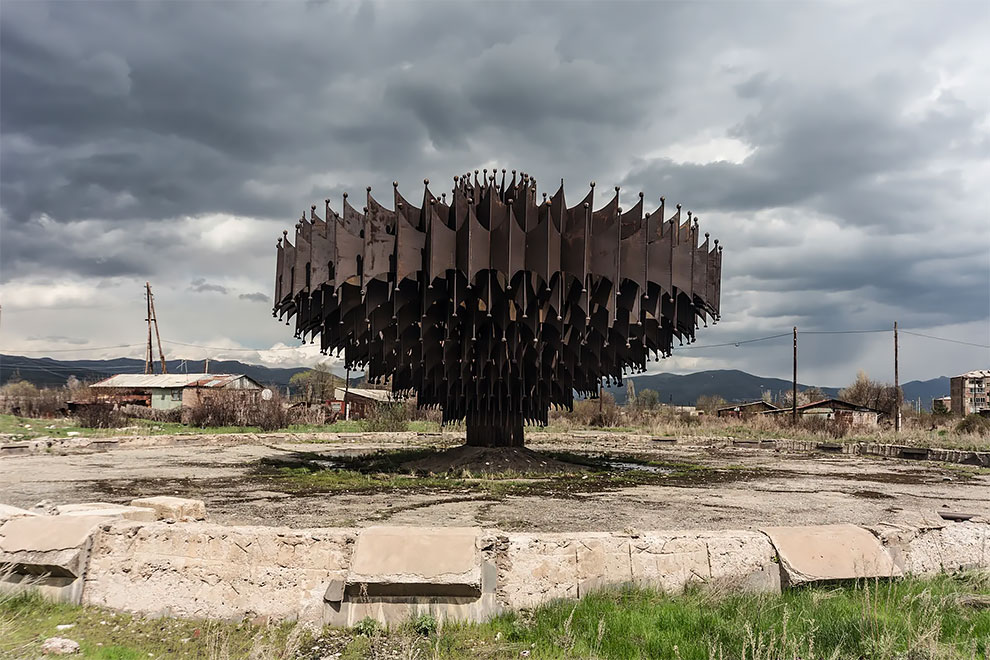 Relics of the Soviet conquest of space, Moscow Pioneer camps, remnants of propaganda along a journey sparsely dotted with statues of Stalin or Lenin, from traditional Moldovan houses to ghosts of the Caucasian wars, by way of petro-chemical factories in the Donbass…

This report invites the reader to relive, through its striking pictures, more than a hundred years of history, from the beginnings of the Soviet period to the legacy of a communist era now fast fading from memory.

Photographer Terence Abela has spent nine years travelling across the former USSR unearthing fragments from its past. His love of history, of photographing relics of the past and discovering the unknown, have combined to create this work. Driven by a desire to preserve the heritage abandoned by states that lurch between the threat of nationalism, dictatorship, wars and the will to invent a new history for themselves, he appeals to us through his pictures to protect these mementos which are at risk of disappearing in the not too distant future. 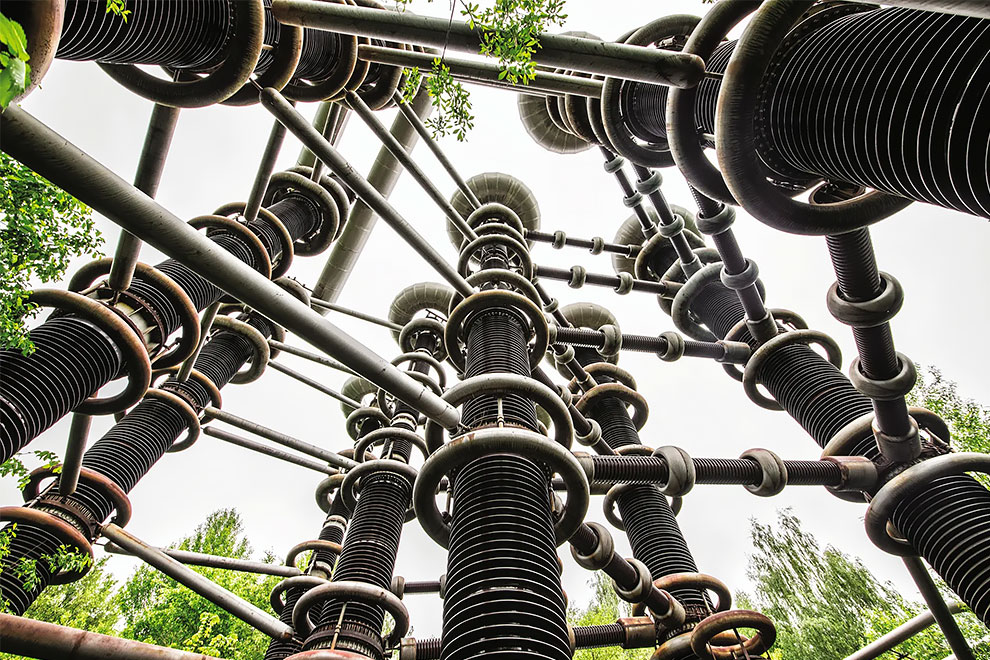 Prototype of a Tesla coil installed at the end of the 1970s in a research centre that was secret at the time. 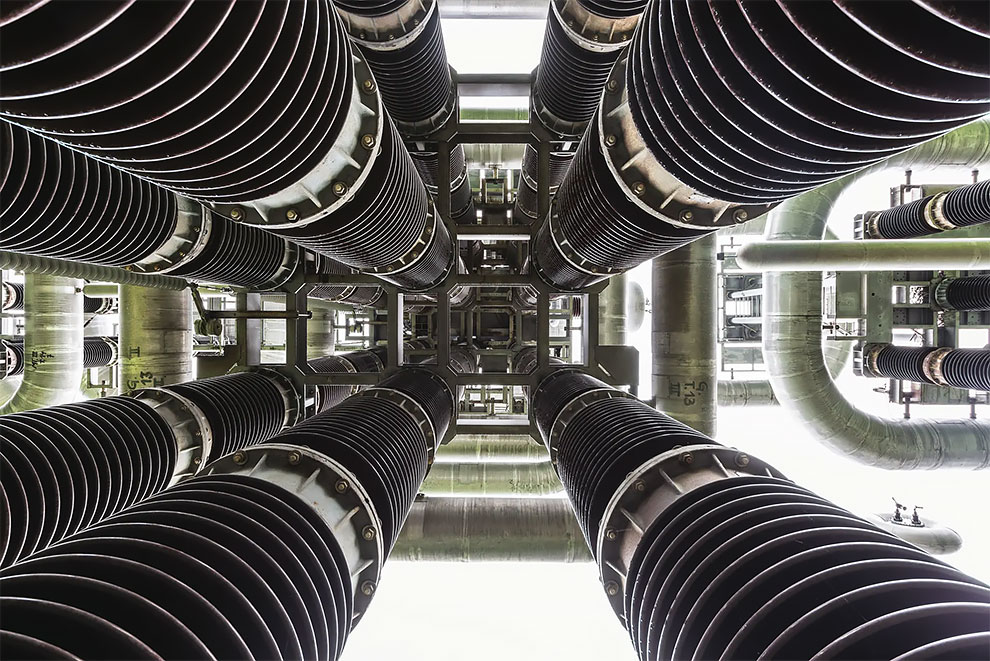 The coil was used to test insulators for the protection of vehicles, aeroplanes and electronic equipment against lightning. 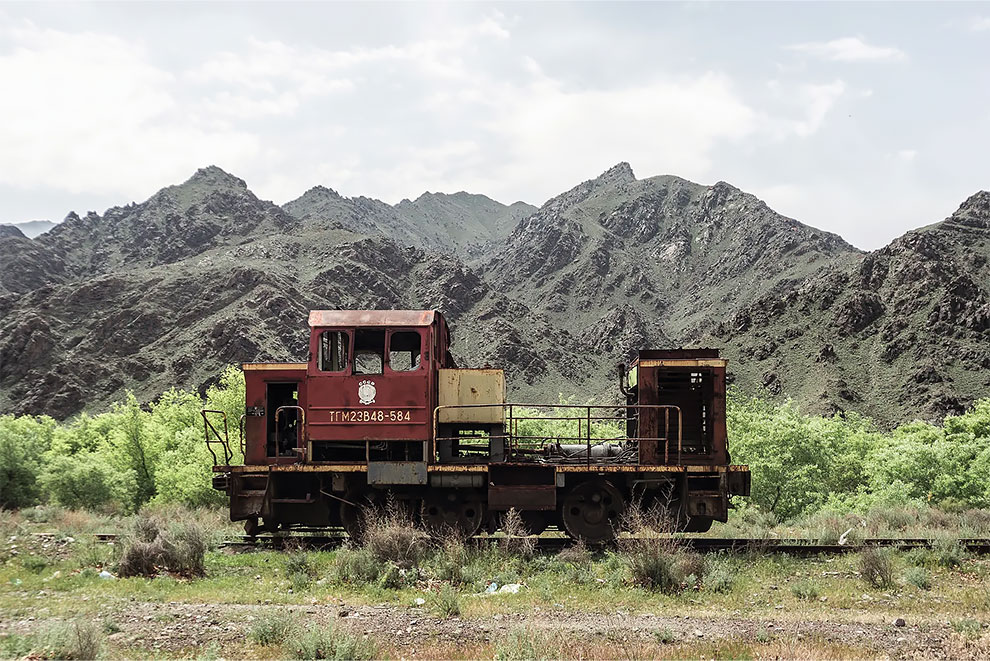 The last station in the country with any Soviet trains. It is the end of the line for this Armenian locomotive. Towering behind it are the Iranian mountains, which long marked out a clear border between the USSR and the rest of the world. 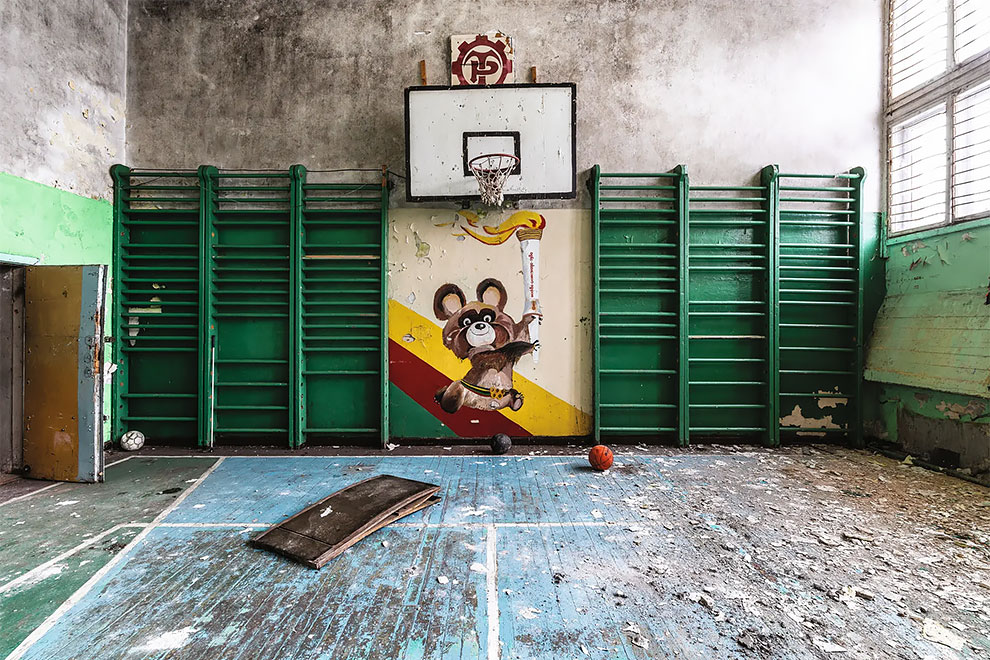 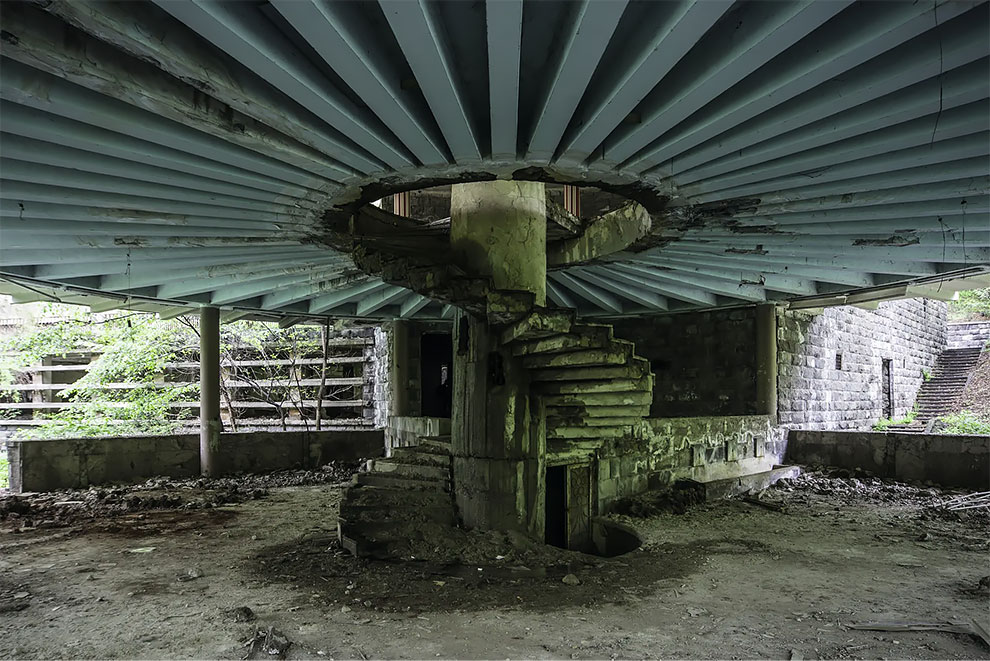 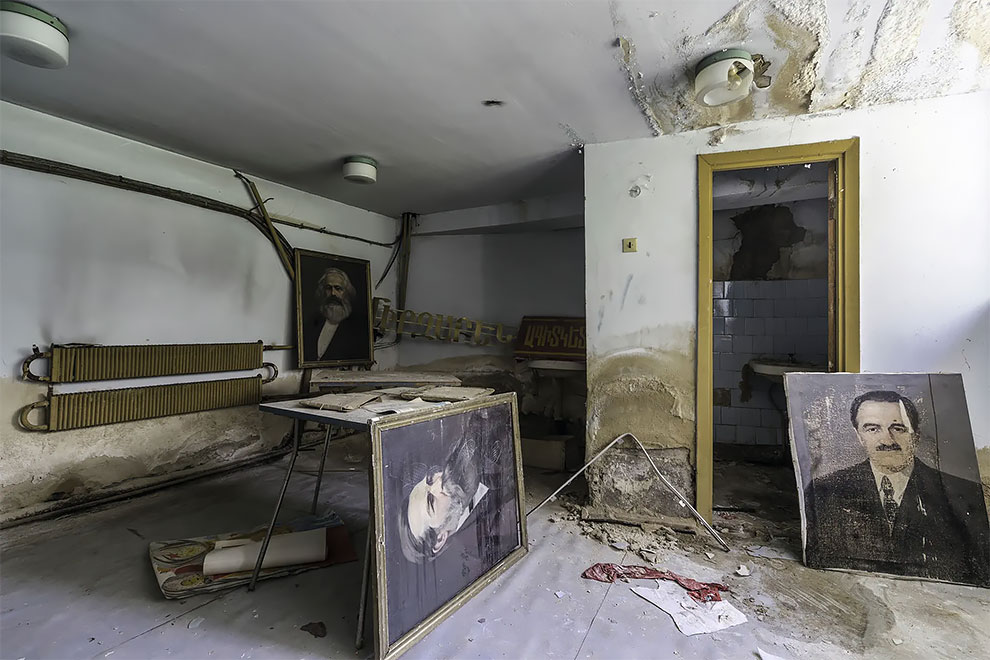 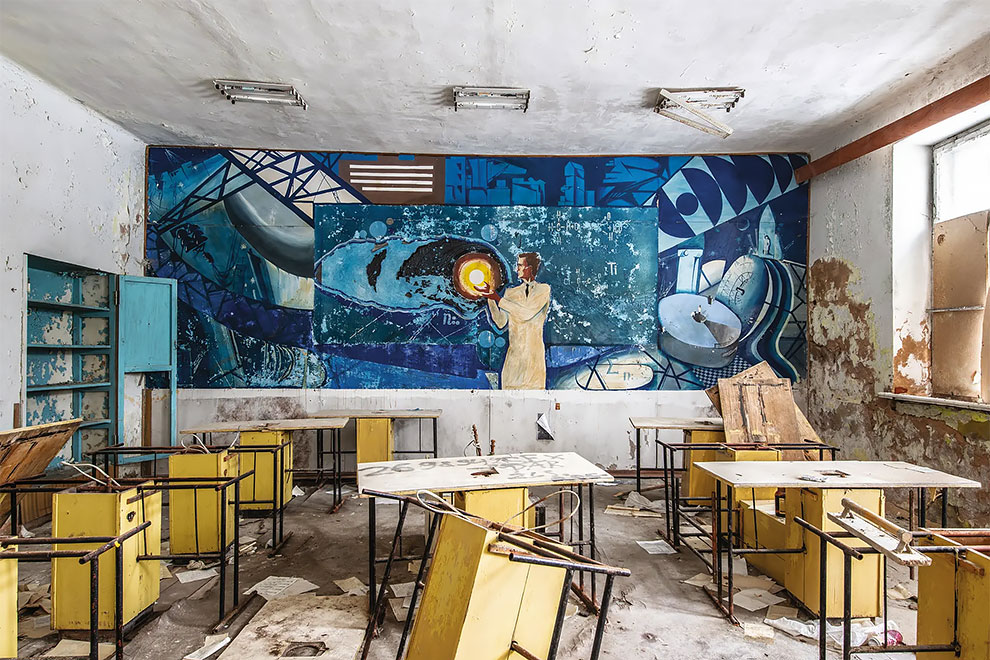 A disused marine school in Riga. 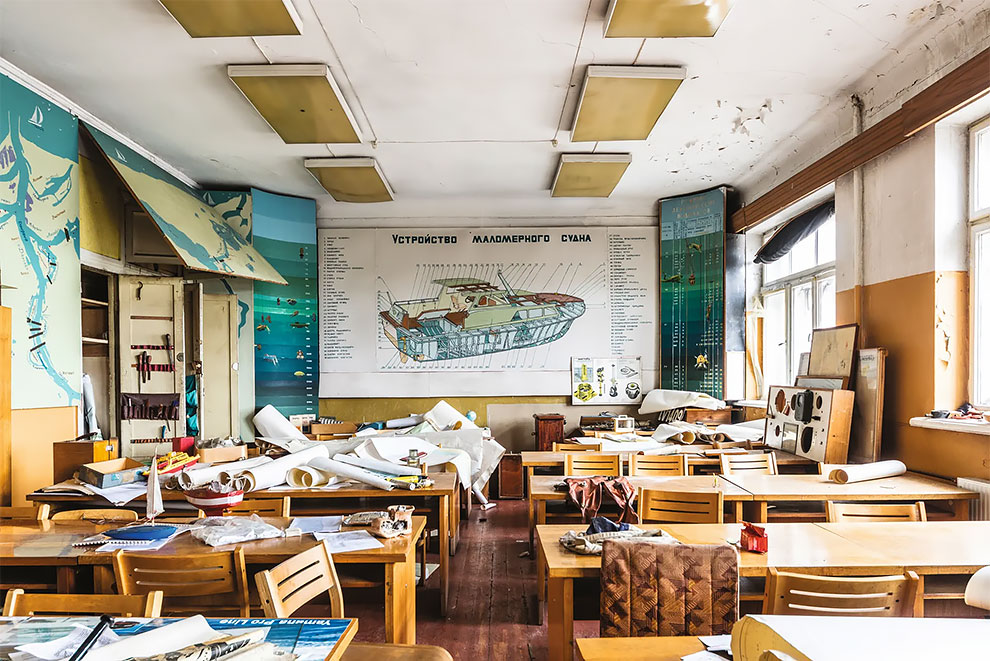 The school was due to be demolished shortly after the photographer’s visit. 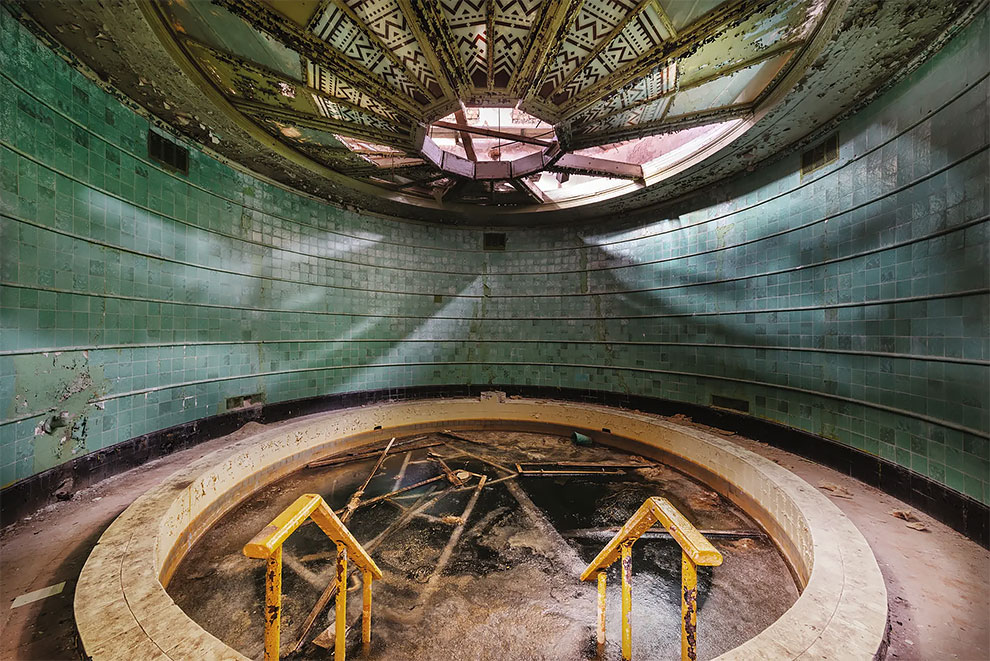 This spa, built in 1838, was for a long time a popular haunt of Russians. A railway line was built to establish a link with Moscow. The complex is on the verge of collapse. 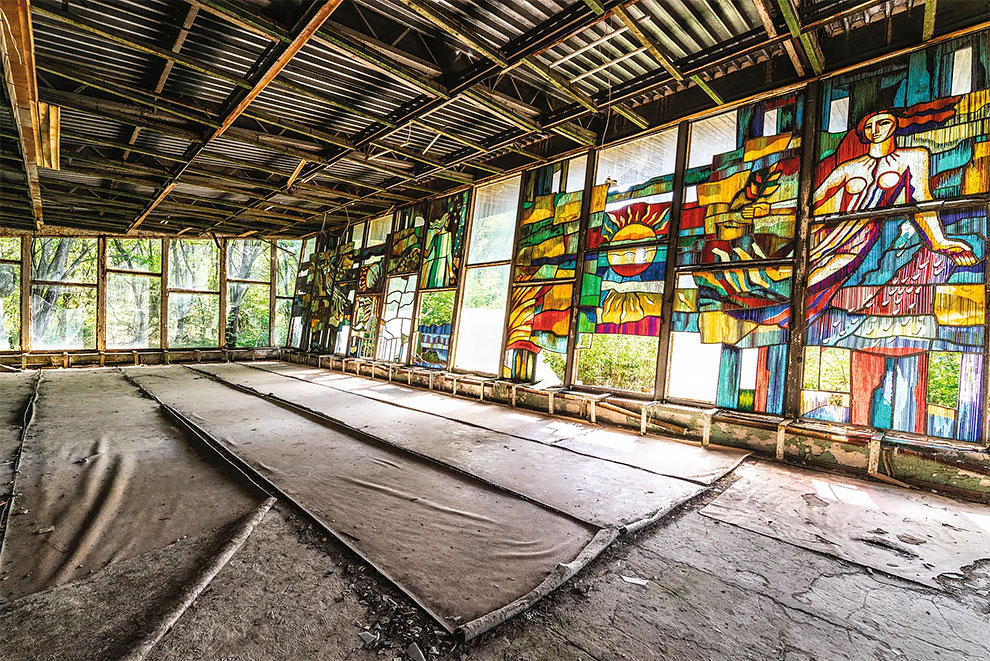 In the ghost town of Pripyat, a few miles from Chernobyl, silence prevails. 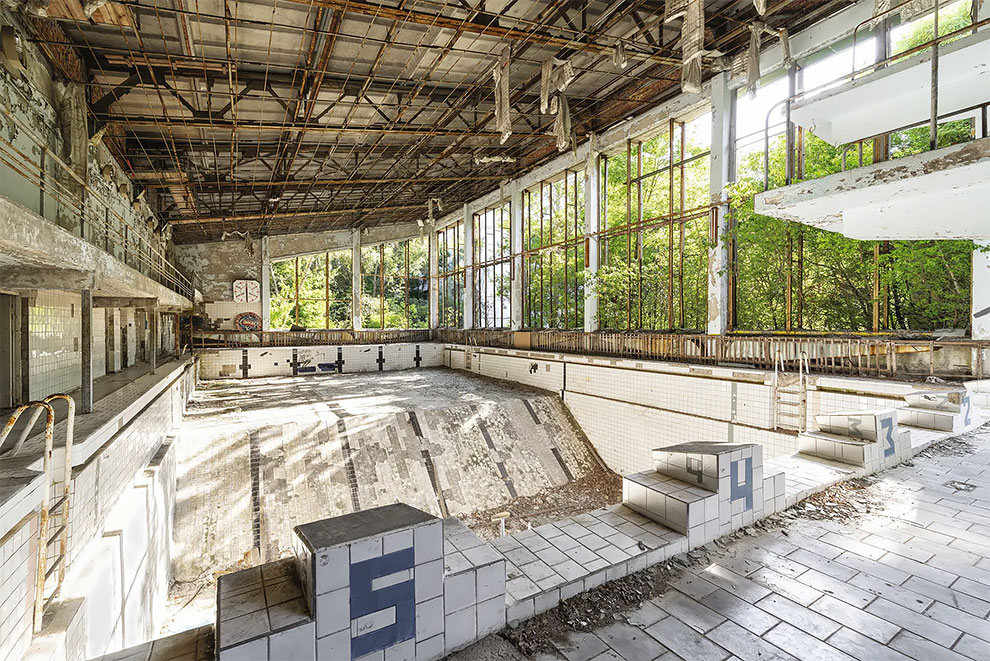 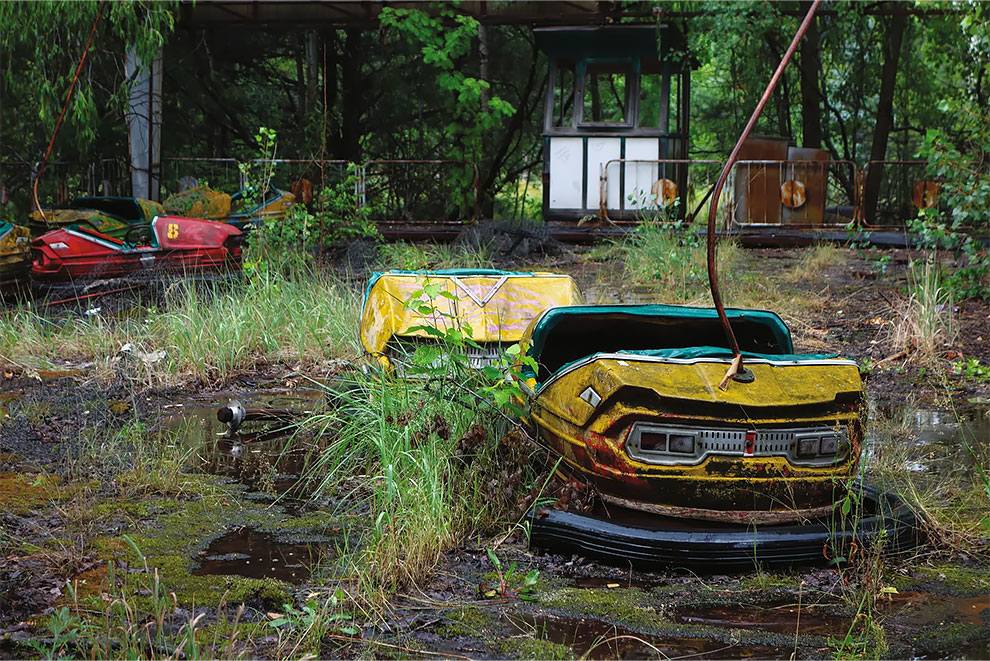 Dodgem cars in the recreation area in Pripyat town centre. 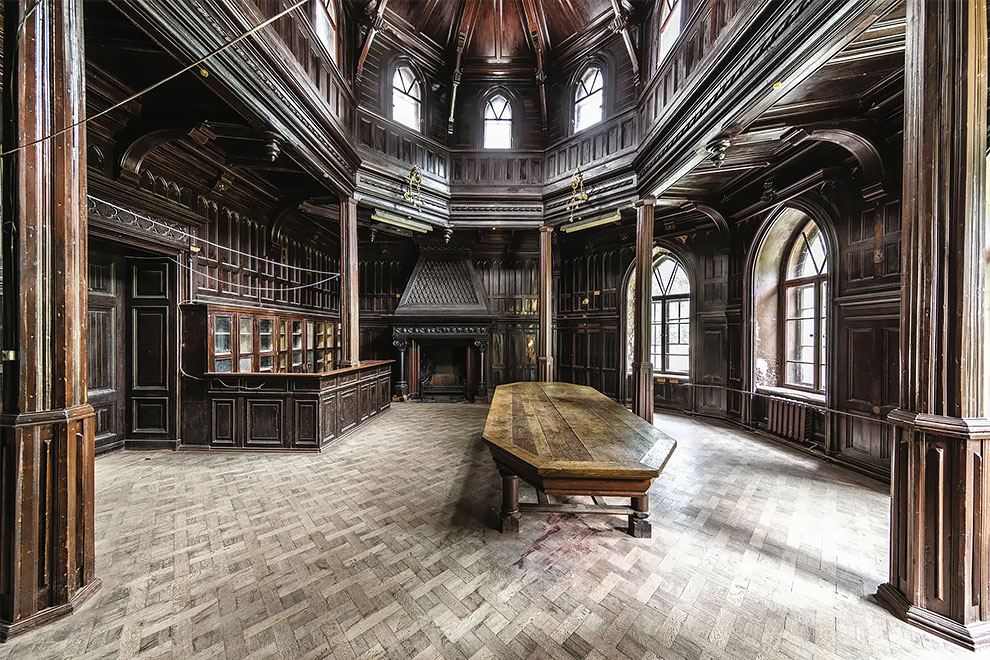 A grand country house in Ukraine. 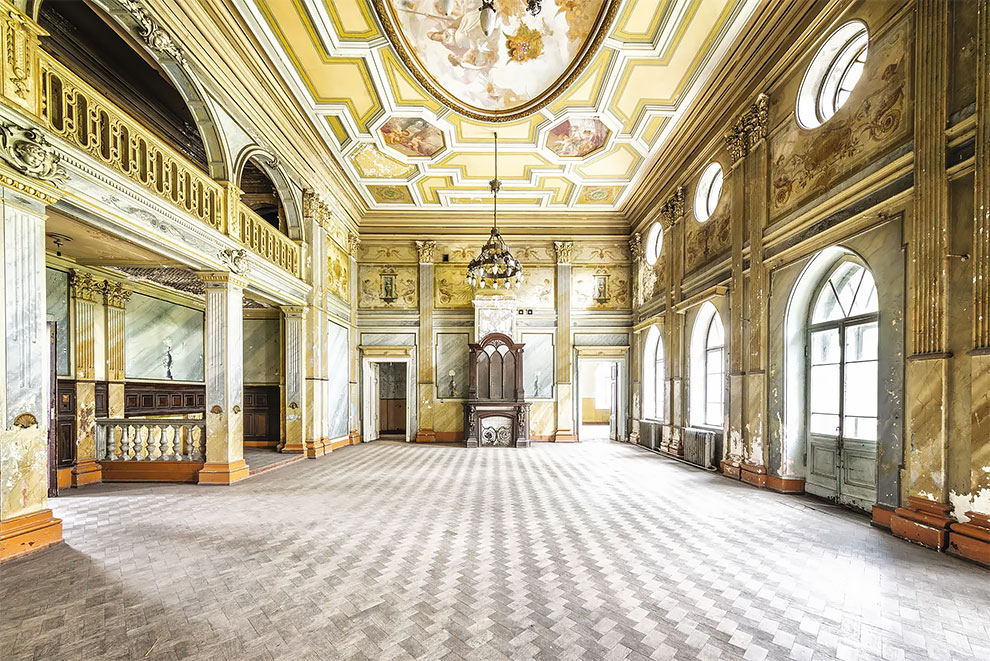 Built in the middle of the 19th century, the house pleasingly blends the neo-classical style with Russian baroque. To the rear there is a large botanical garden. 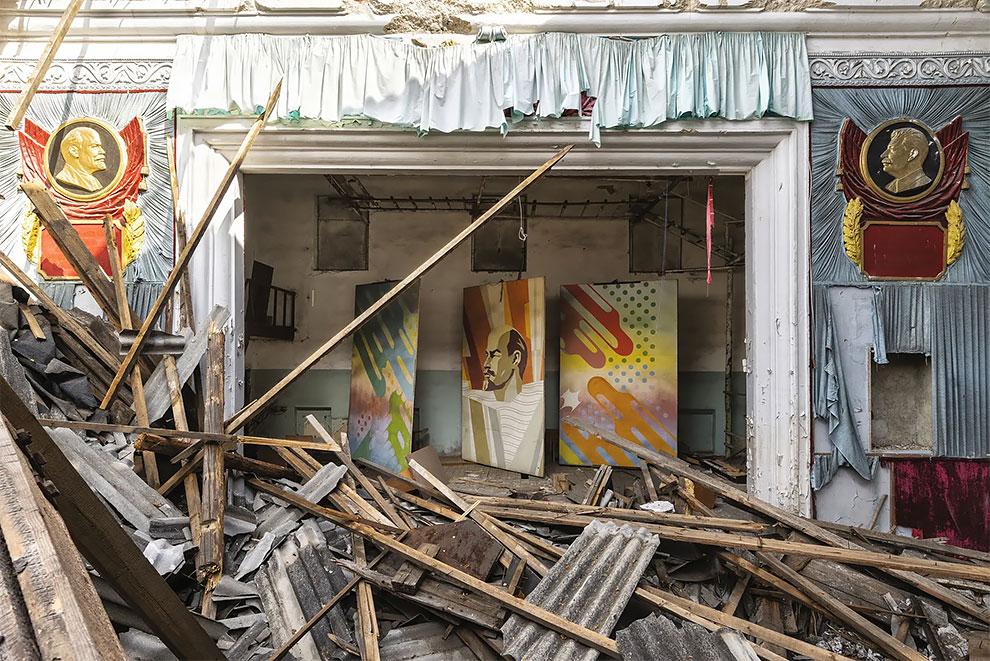 A theatre belonging to a sanatorium. The two medallions on either side of the stage show Lenin and Stalin in profile. In Ukraine, depictions of Stalin became increasingly rare because he was responsible for the terrible famine that decimated the country between 1931 and 1933. Most memorials bearing his image have been destroyed. 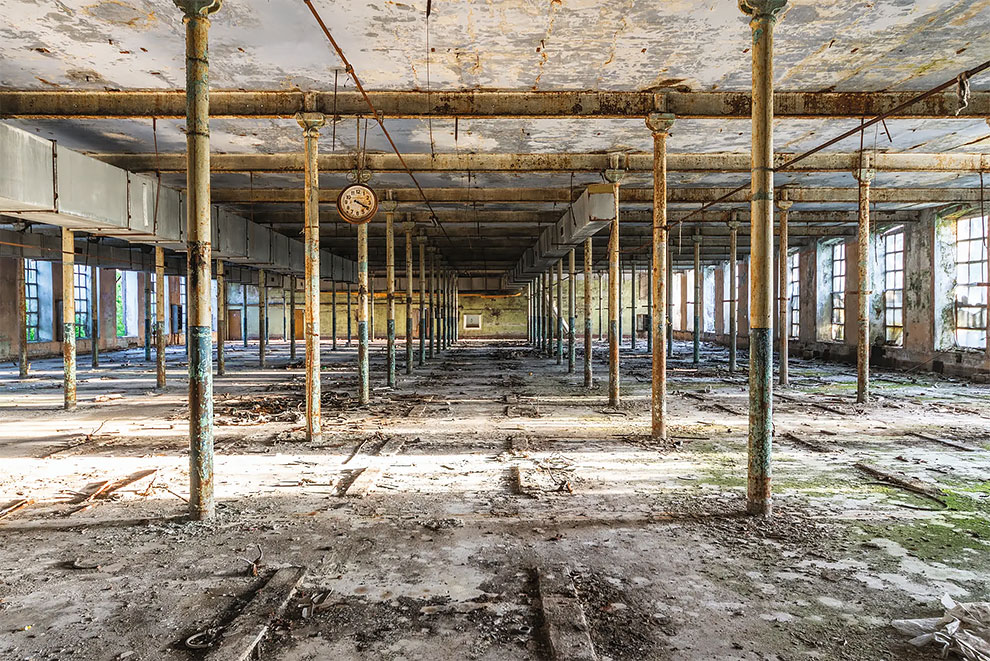 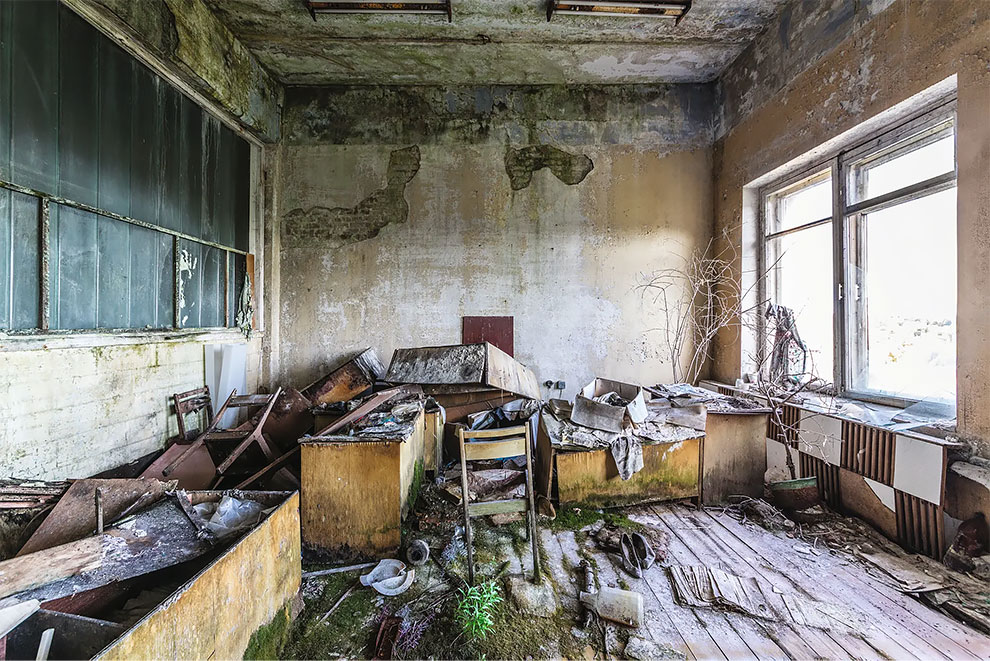 A room in the textile factory. 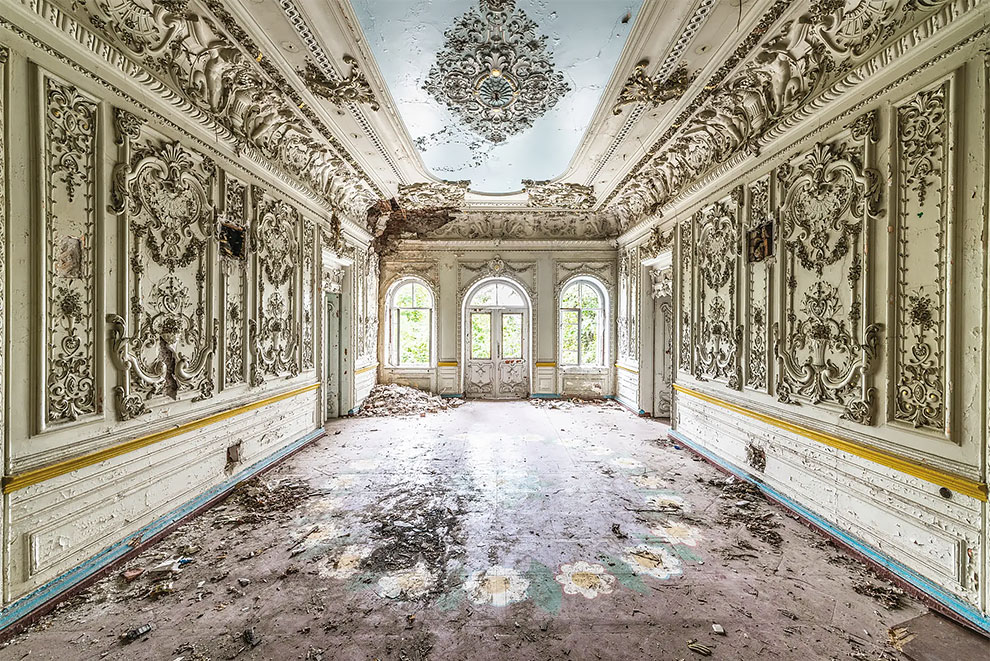 A grand country house dating from the 18th century, built by Italian architects. After the Bolshevik revolution, the house was brought into state ownership in 1918. 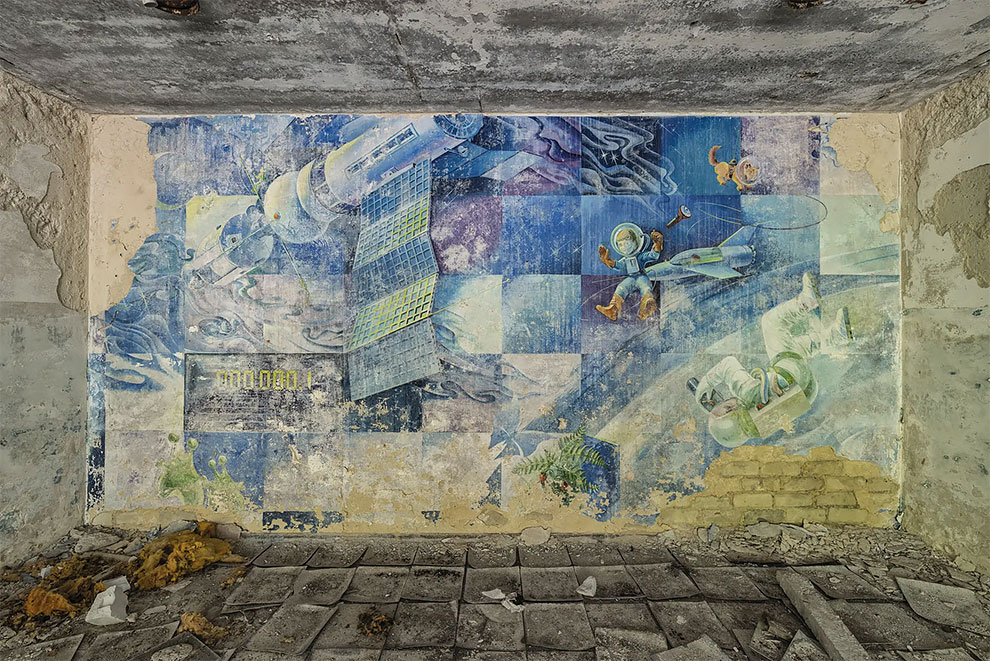