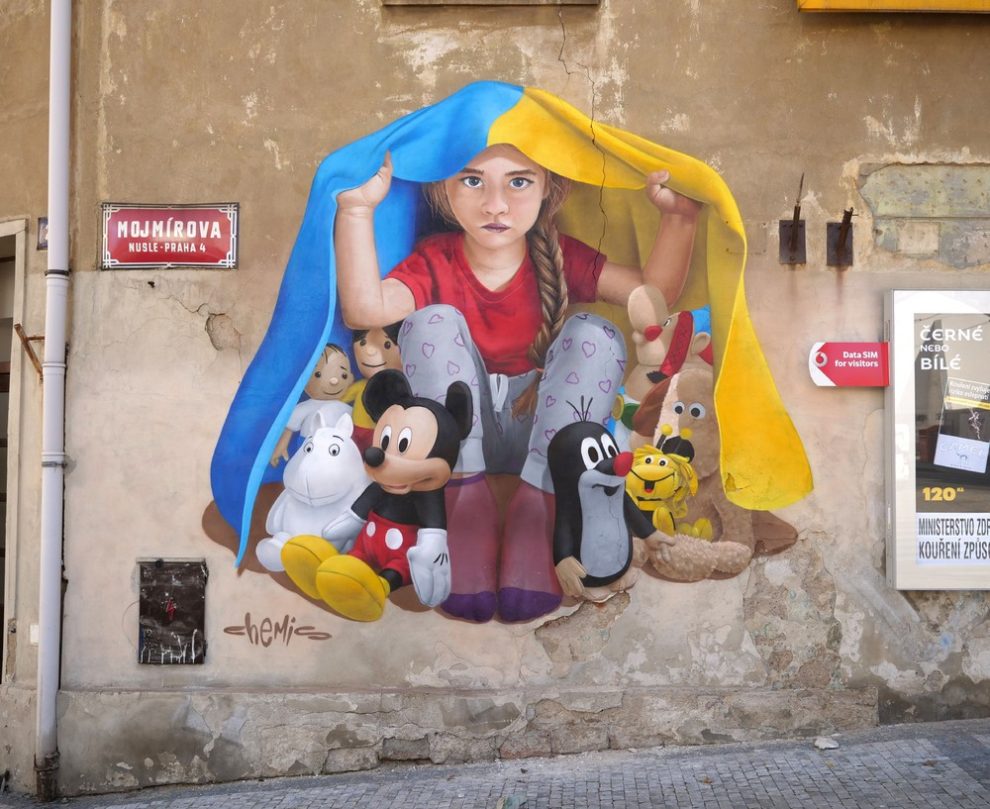 Amos Chapple
The graffiti against the war in Ukraine of the street artist ChemiS in Prague, Czech Republic.

Donate to support the Ukrainian Red Cross to help civilians in this difficult time for Ukraine. You can donate right now:

Donate page on the URCS website: redcross.org.ua/donate
iRaiser platform donate.redcrossredcrescent.org/ua/donate
(in Ukraine) SMS to the number 88033 Vodafone. The cost of a charity SMS is UAH 20. 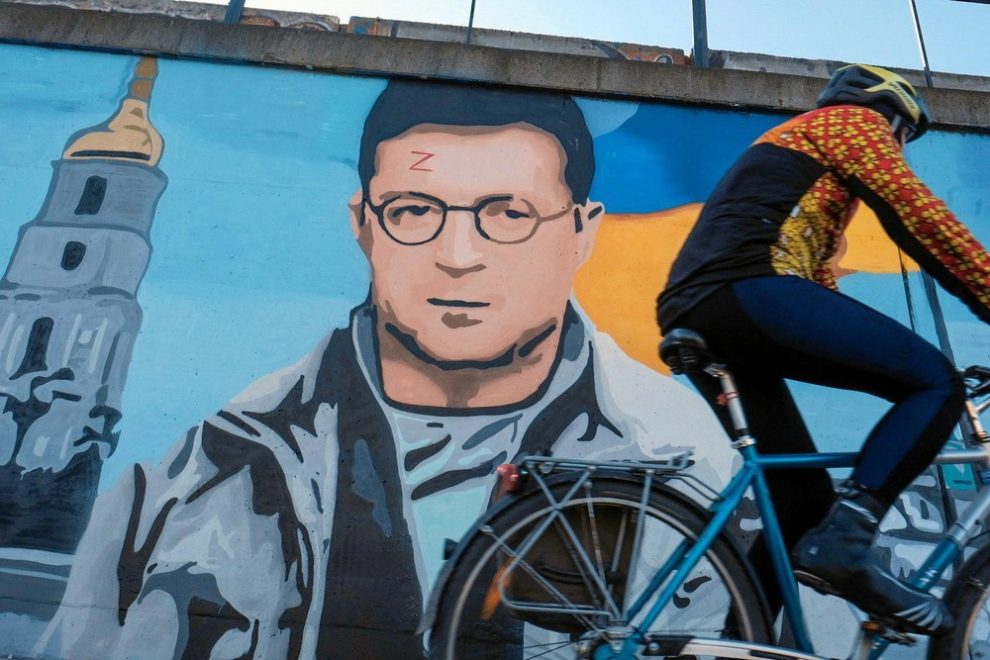 Piotr Skornicki
A mural by graffiti artist KAWU depicting Ukrainian President Volodymyr Zelenskiy as Harry Potter with Z on his forehead (instead of lightning bolt) symbolizing Russia’s invasion of Ukraine is seen in Poznan. 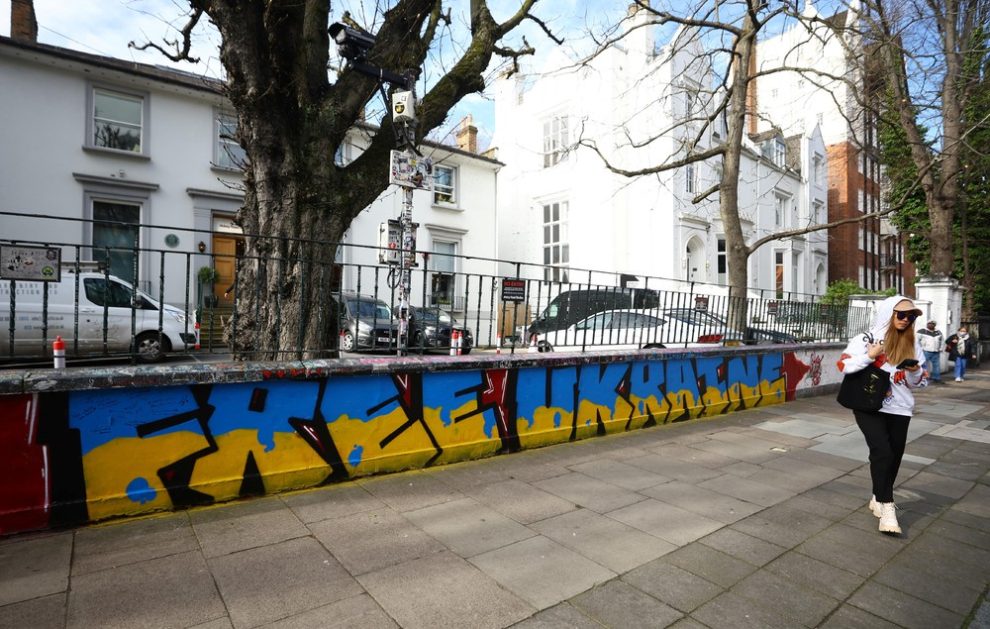 Hannah McKay
A woman walks past graffiti in support of Ukraine outside the Abbey Road Studios, as Russia’s invasion of Ukraine continues, in London, Britai. 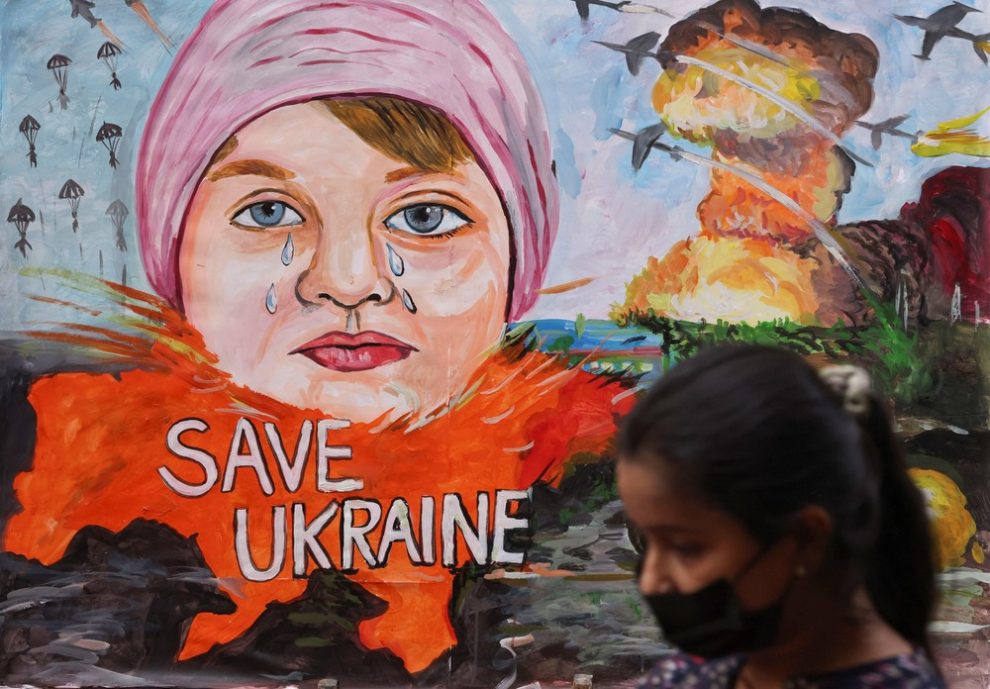 Francis Mascarenhas
A girl walks past a painting depicting the crisis between Russia and Ukraine, outside an art school in Mumbai, India. 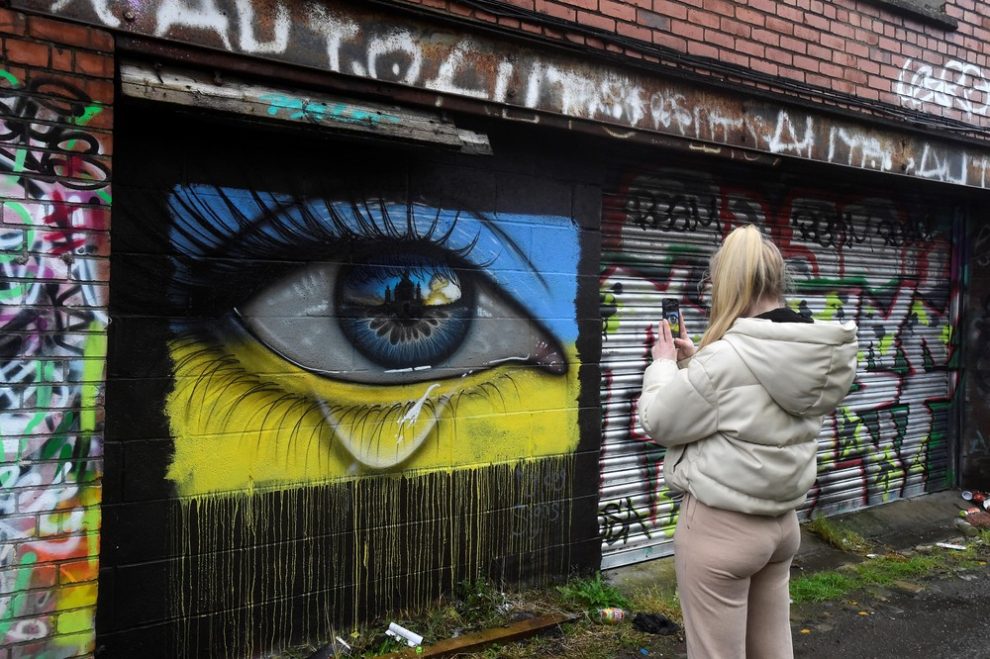 Rebecca Naden
A woman takes a picture of a mural of a weeping eye in the colors of the Ukrainian flag by artist MyDogSighs, in Cardiff, Wales, Britain. 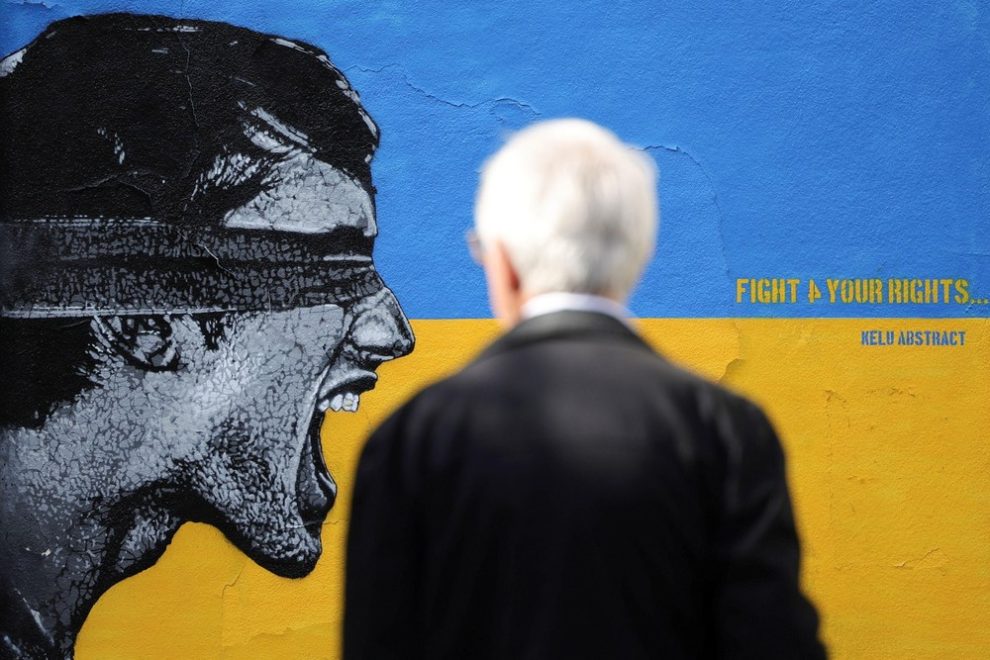 Sarah Meyssonnier
A man looks at a mural in support of Ukraine by French street artist Kelu Abstract following Russia’s invasion of Ukraine, in Paris, France. 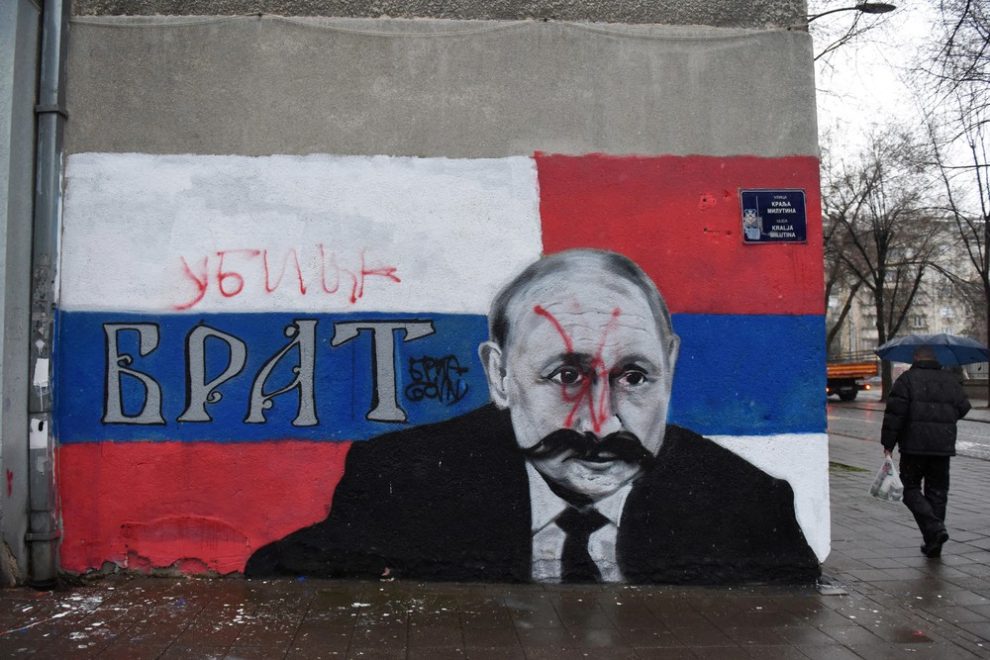 Zorana Jevtic
A man walks next to a mural of Russian President Vladimir Putin, which has been vandalized with red spray paint and the word “Murderer” written above the original text reading: “Brother”, following Russia’s invasion of Ukraine, in Belgrade, Serbia. 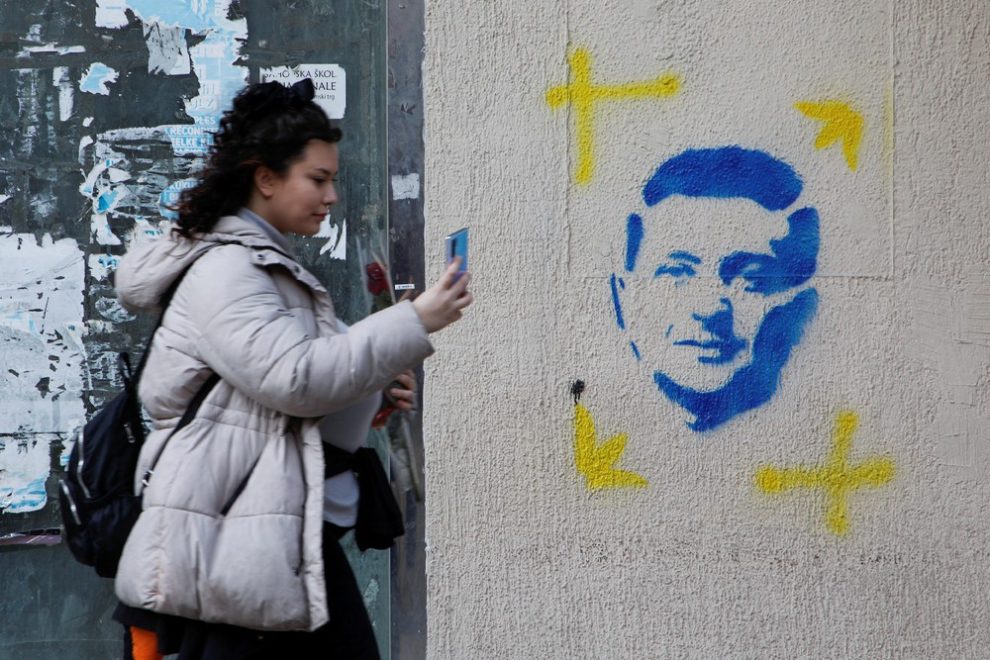 Stevo Vasiljevic
A woman uses a phone in front of a stencil-graffiti with the image of Ukrainian President Volodymyr Zelenskiy, amid Russian invasion on Ukraine, in Podgorica, Montenegro. 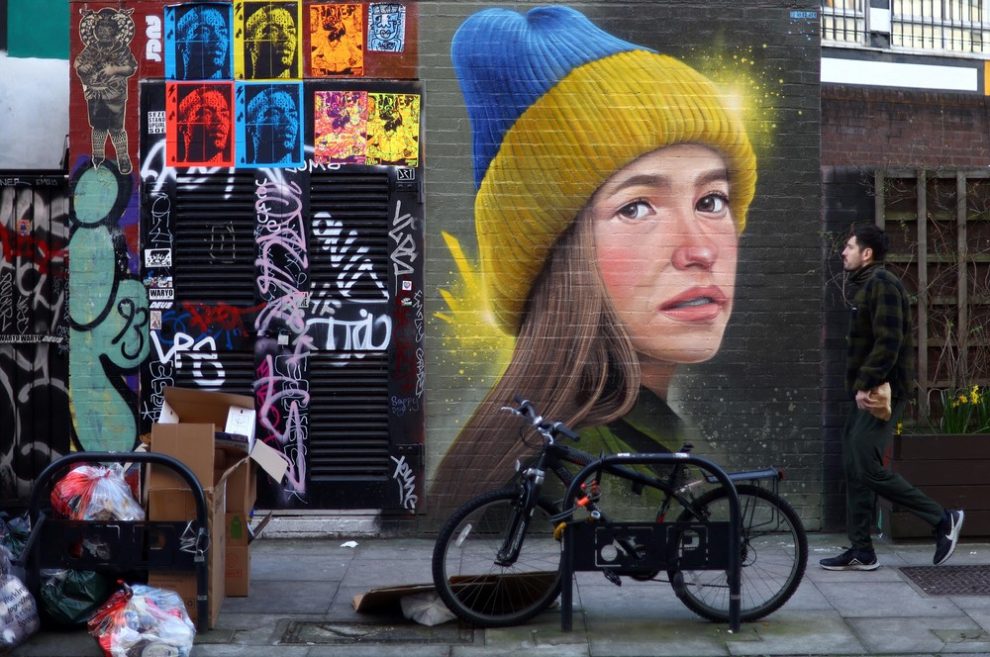 Hannah McKay
A man walks past a mural in support of Ukraine by artist WOSKerski, as Russia’s invasion of Ukraine continues, in London, Britain. 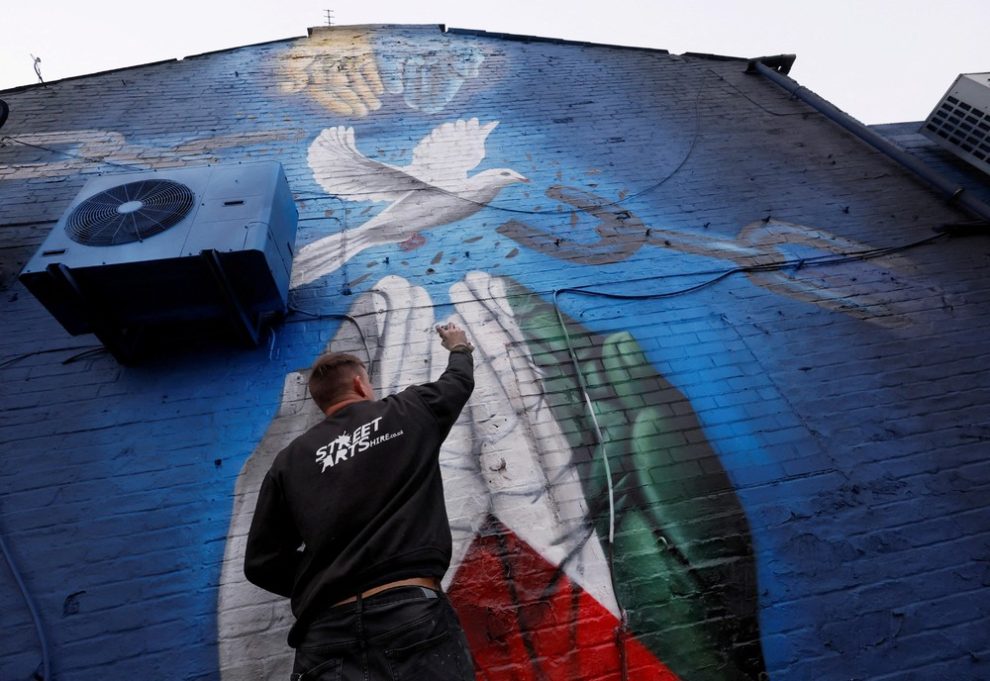 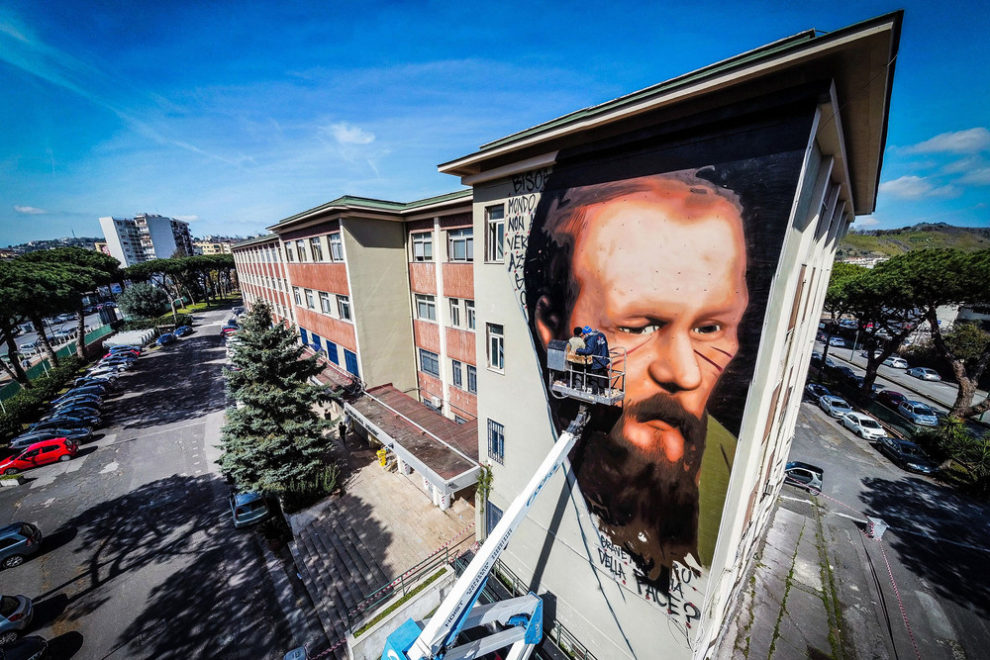 Cesare Abbate
A large mural with the face of Russian author Fyodor Dostoevsky adorns a wall of a building in Naples, Italy. The artwork was created by the Italian street artist Jorit Agoch to say no to any kind of censorship in response to the suspension of the lessons of Italian writer Paolo Nori on Dostoevsky at the Bicocca University in Milan following Russia’s military invasion of Ukraine. 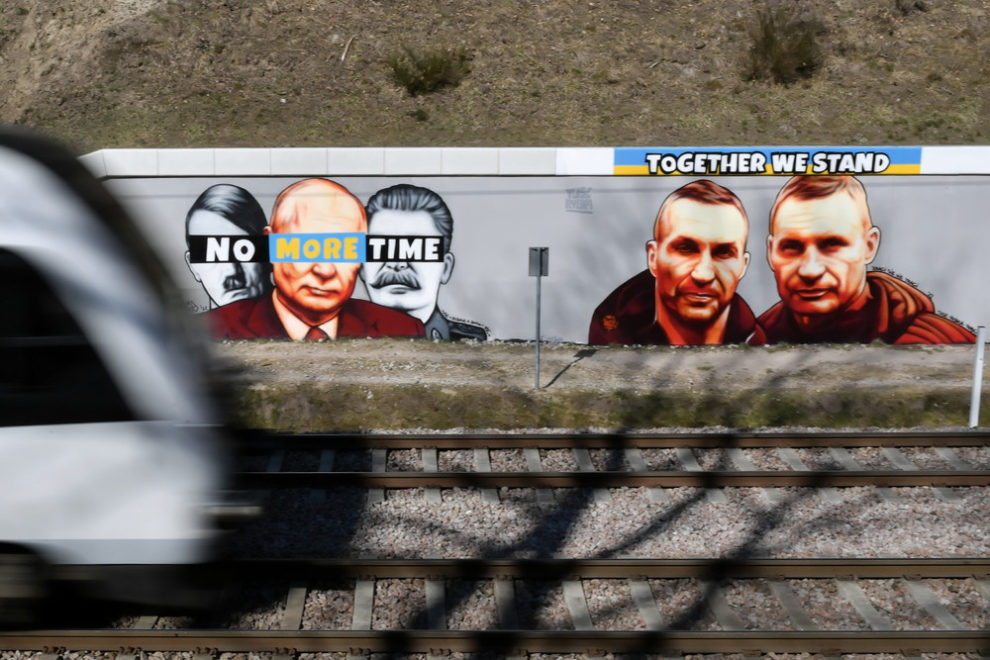 Adam Warzawa
Murals showing Ukrainian brothers Klitschko “Together we stand” (R) and Hitler, Putin and Stalin “No more time” (L) created by graffiti artist Tuse, is sprayed on a wall n Gdansk, northern Poland. On 24 February Russian troops had entered Ukrainian territory in what the Russian president declared a “special military operation”, resulting in fighting and destruction in the country, a huge flow of refugees, and multiple sanctions against Russia. 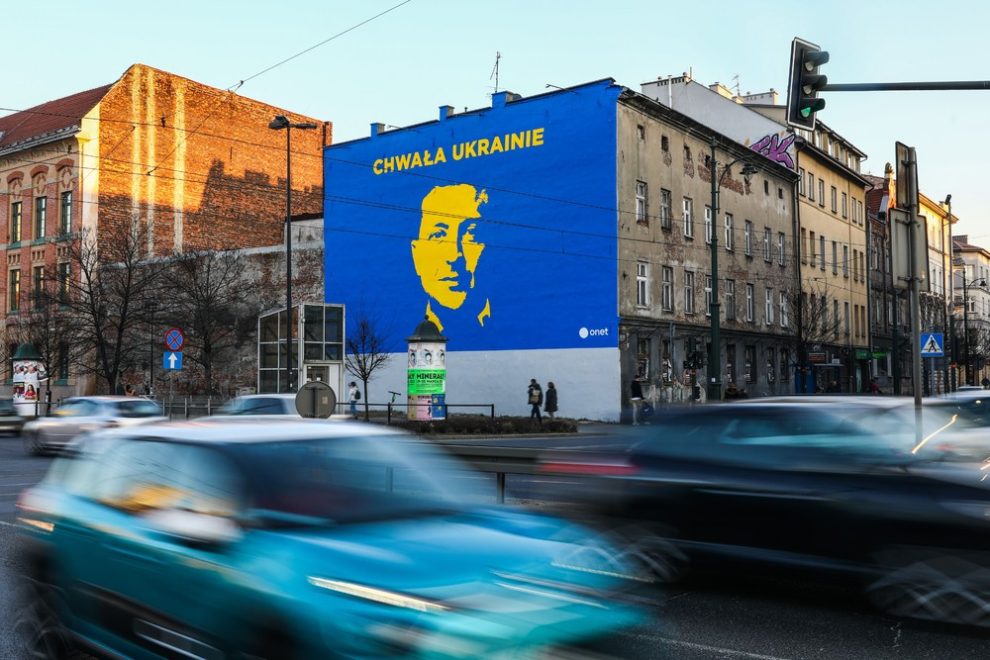 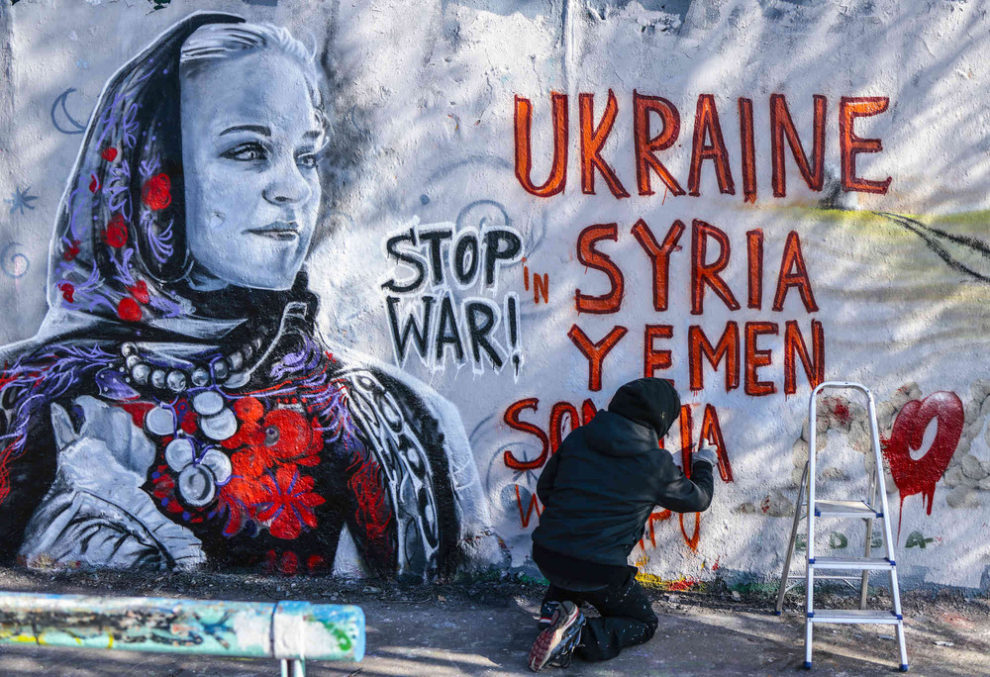 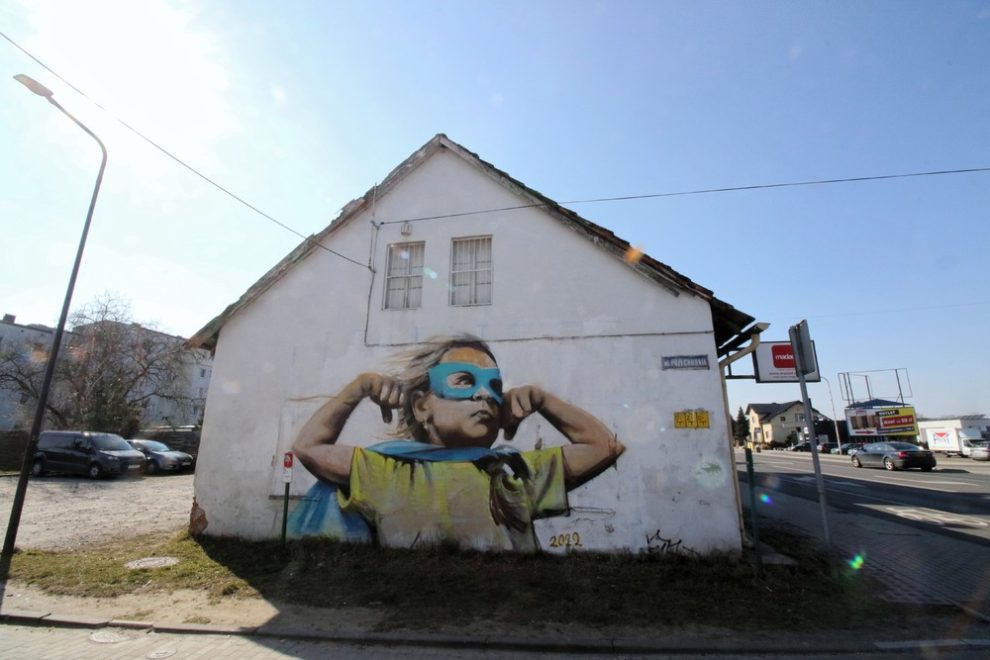 Krzysztof Swiderski
A mural showing Ukrainian little girl as a “Super Girl” by anonymous artist adorns the side wall of a house in Kedzierzyn-Kozle, southern Poland. According to the United Nations High Commissioner for Refugees (UNHCR), on March 09, 2.1-2.2 million refugees have fled Ukraine since Russia started military invasion of Ukraine on 24 February. 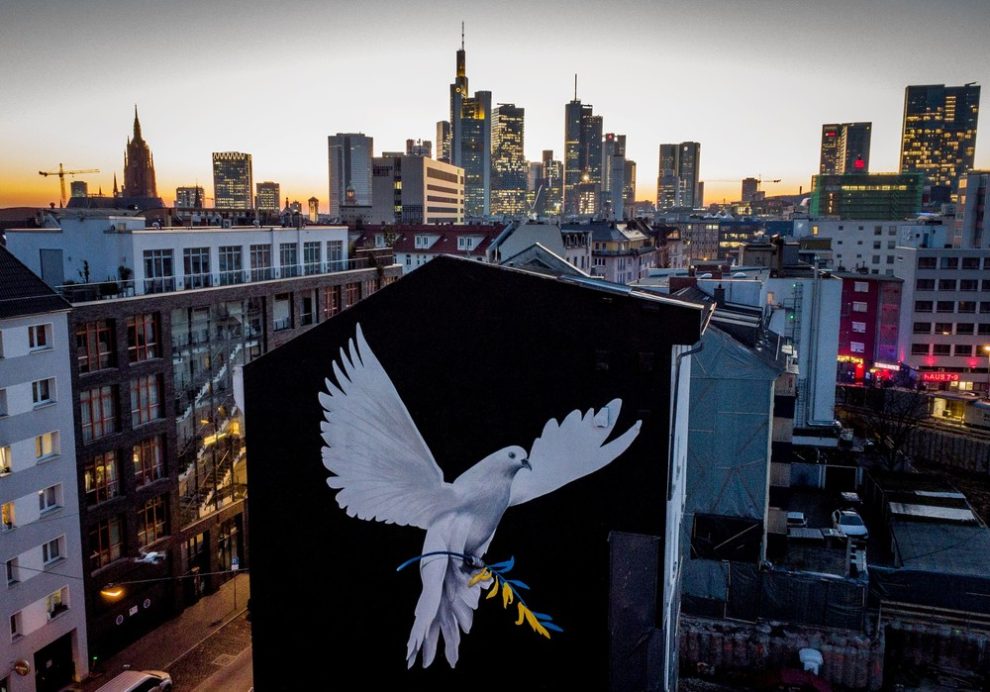 Michael Probst
A peace mural showing a dove with a branch in Ukrainian colors by artist Justus Becker is painted on the wall of a house in Frankfurt, Germany. 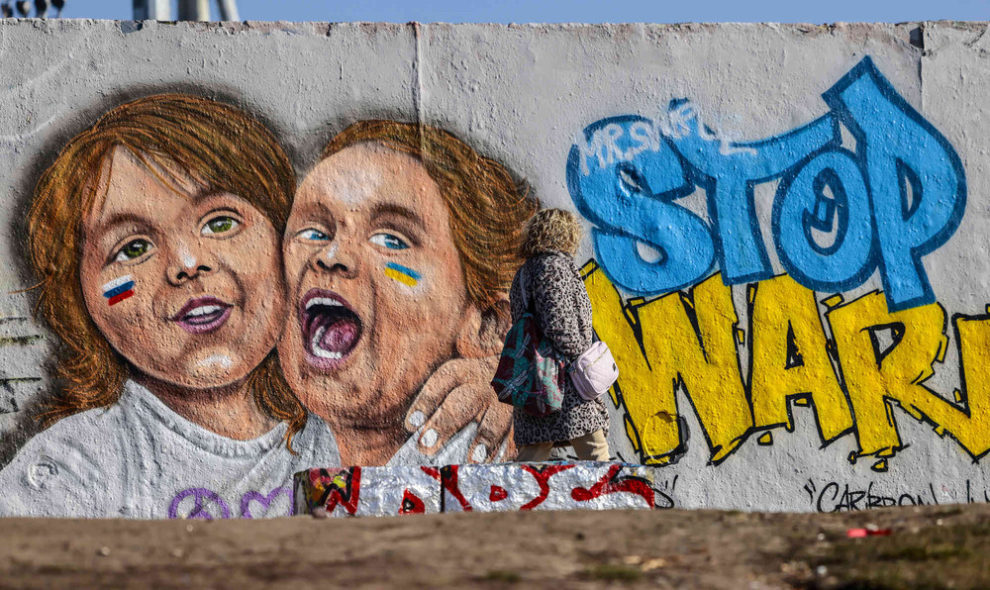 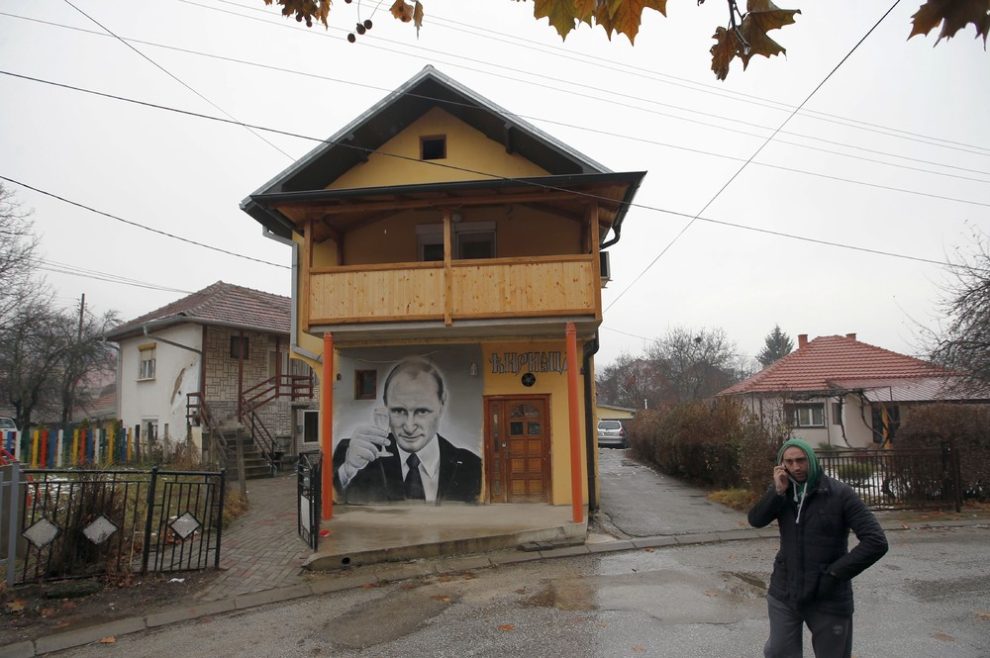 Darko Vojinovic
A man walks past a mural depicting Vladimir Putin, in Zvecan, Kosovo. For some European countries watching Russia’s bloody invasion of Ukraine, there are fears that they could be next. Western officials say the most vulnerable could be those who are not members of the NATO military alliance or the European Union, and thus alone and unprotected – including Ukraine’s neighbor Moldova and Russia’s neighbor Georgia, both of them formerly part of the Soviet Union – along with the Balkan states of Bosnia and Kosovo. 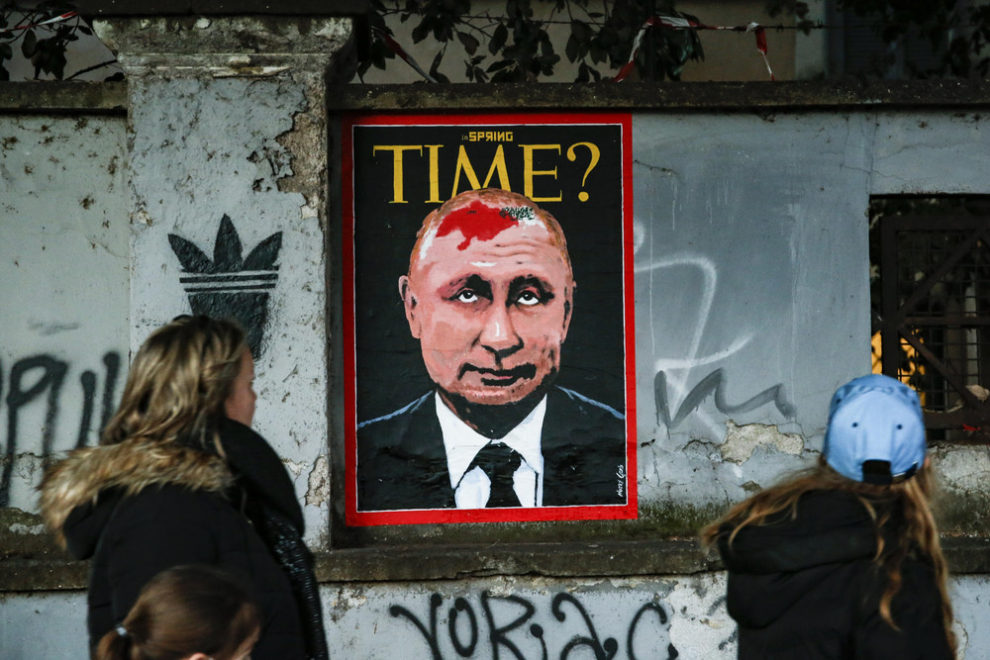 Fabio Frustaci
The new mural by street artist Harry Greb dedicated to the Ukrainian crisis in Rome, Italy. The poster, posted on the wall of the Lungotevere dei Tebaldi, depicts a hypothetical Time magazine cover that portrays the face of Russian President Valdimir Putin with a birthmark on his head in the shape of Ukraine (referring to the birthmark of Michail Gorbachev). 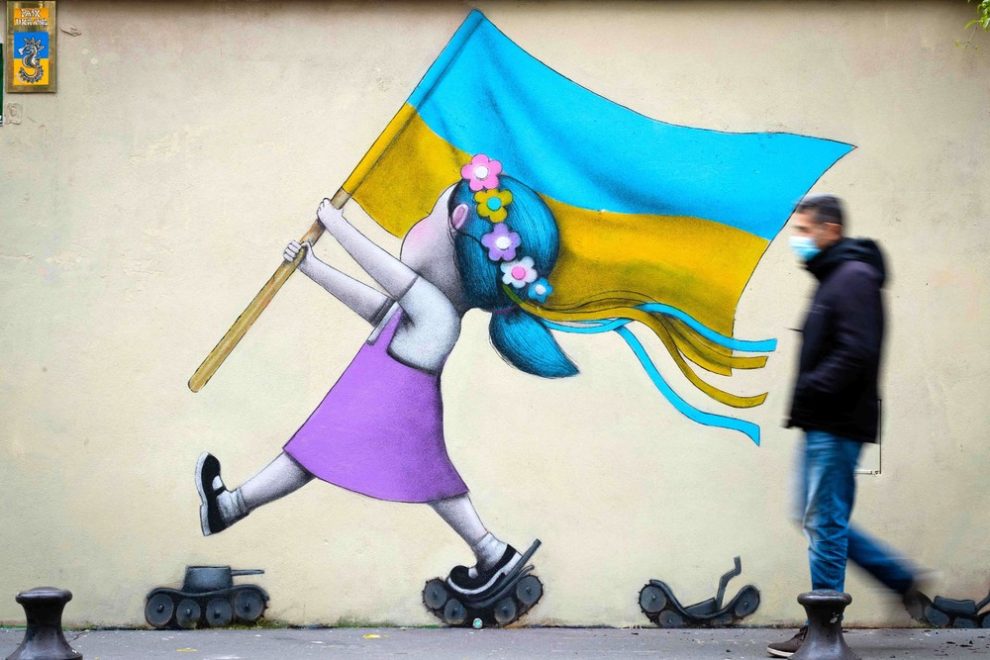 Joel Saget
A bystander walks past a fresco by street artist Seth depicting a girl with a Ukrainian flag walking on tanks in Paris.

12 Tricks To Appear Smart In Emails
Artist Illustrates What Spongebob Characters Would Look Like As Humans
Hilarious Comics With Unexpected Endings By War And Peas
Artist Makes These Really Useful Work Meeting Achievement Badges - Try To Collect Them All
Chernobyl Exclusion Zone Receives an Official Logo
Stunning Vintage Photos Of Women Modeling Bathing Caps With Faces On Them
Anonymous Artist Is Photoshopping Kids Books, And The Result Is Hilariously
Creative And Dreamlike Photo Manipulations By Josh Pierce
Crocodile Trying To Do Things In Hilarious Sketches By The Japanese Illustrator Keigo
"Art of The Doodler": Fyodor Dostoevsky Draws In His Manuscripts
"Flowers Inside": Absolutely Stunning Digital Concept Artworks of Denis Sheckler
16 Images That Perfectly Capture How Completely Nuts Modern Life Has Become
A Covenant: The Gothic Ladies of Tom Bagshaw
Creepy, Funny, and Very Strange: Eddy Stevens' Surreal Portraits
This Artist Pays Homage To Today's Heroes With Stunning Illustrations
A Rainbow of Vegetation Consumes a 7-Story Building in a New Mural from ‘Blu’ in Rome
Stunning Dark And Relevant Charcoal Drawings By Trevor Guthrie
Stunning Digital Art Paintings of Random People - A Fun Series by Julio Cesar
Expand Your General Knowledge With These Fun Illustrated Facts
Black Friday Shoppers are Suspiciously Similar to Zombie Hordes
Web Developer Creates A Site That Turns Your Photos Into Works Of Emoji Art
An Artist Has Designed Attractive Anti-Social Media Banners To Fight Social Media Addiction
This Optical Illusion Is the Most Beautiful Street Artwork in France
Humoristic Illustrations Reveal the Daily Life Before and After COVID-19
streetart, ukraine, war