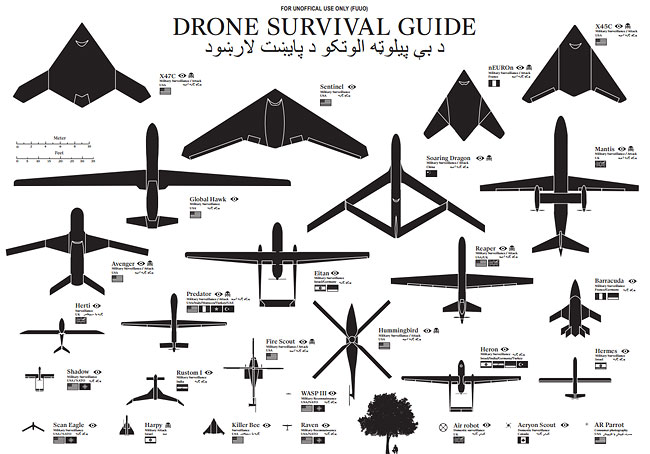 Our ancestors could spot natural predators from far by their silhouettes. Are we equally aware of the predators in the present-day? Drones are remote-controlled planes that can be used for anything from surveillance and deadly force, to rescue operations and scientific research. Most drones are used today by military powers for remote-controlled surveillance and attack, and their numbers are growing. The Federal Aviation Administration (FAA) predicted in 2012 that within 20 years there could be as many as 30.000 drones flying over U.S. Soil alone. As robotic birds will become commonplace in the near future, we should be prepared to identify them. This survival guide is an attempt to familiarise ourselves and future generations, with a changing technological environment.

This document contains the silhouettes of the most common drone species used today and in the near future. Each indicating nationality and whether they are used for surveillance only or for deadly force. All drones are drawn in scale for size indication. From the smallest consumer drones measuring less than 1 meter, up to the Global Hawk measuring 39,9 meter in length.

Close Up
Monkey Controls Robotic Arm With Brain Implants
Amphibious Folding Motorcycle From Russia Fits In The Trunk Of A Car
The Human Predators: Innovative Camo Patterns Inspired by Nature
Louie Mattar’s Cadillac, the Car That Has Everything, 1952
A Man Created A Bathroom Mirror That Looks Like The Future
This Is What Can Happen When You Don't Use Your Computer For A Month
Just A Vespa Jet Ski
Limo-Jet: The World's First Private Jet Converted Into A Luxury Limousine
America’s First Zazzz Marijuana Vending Machine Opens in Seattle
Oceanco Debuts Unique 115-Meter-Long Megayacht That Will Truly Sail You In Style
Superb Yamaha Swan-Like Scooter With Insect Wings Will Make You Feel Like Flying
Inside China's Trash Park Where Bentleys And Mercedes Worths Millions Are Abandoned By Their Rich Owners
Beautiful Photos of the Lincoln Continental Mark V
Futuristic Prototype Of The First Soviet Night Vision Goggles
Futuristic and Retro, Hyundai Transforms First-Generation 1975 Pony with Electric Powertrain
Turanor PlanetSolar: The First Solar-powered Boat
The Making of a Windfarm
Port Of LA Re-Opens After Weekend Shutdown
An Animatronic Polar Bear Visits the London Underground
An Apple-Inspired Concept Smart Home Hub That Looks And Feels Like A Cat
Electric Dreams: Amazing Portraits Of ’80s Geeks
Inside the Google's Headquarter in Zurich, Switzerland
This Awesome Vending Machine Offers Short Stories And Poems Instead Of Snacks
Meet The Davis Divan: The Outrageous Three-Wheeled Sedan That Almost Made It
The iTray: Restaurant Invents Flying Drone Waiter Tray
China Prepares to Launch Its First Space Laboratory Module Tiangong-1
The 1949, The Kurtis Sport Car, One Of 16 Produced
“Long Ma” - the French Mechanical Installation
drone, guide, survival